You’ll have to forgive my late posting- I was at a birth all Tuesday into Wednesday morning, so I was zonked and didn’t remember. Even if I had, I likely wouldn’t have had the mental energy to write it. So, here it is, fresh and ready. 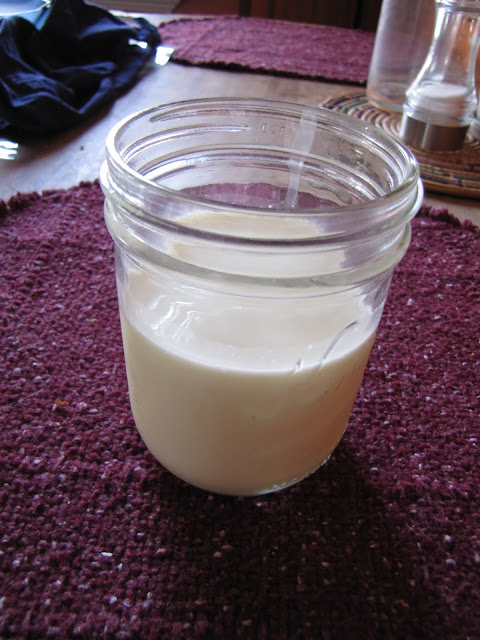 I like raw, unpasteurized, straight-from-the-cow milk. In many ways my discovery of this stuff started me down this crazy foodie path I’m on. I remember having my first glass of it. I was just out of high school, a smoker and a teenager just generally really unaware of what my body needed. My friend handed me a small glass, really excited to share this with me, and I remember thinking that it just tasted like… milk. Whole, good, cold milk. Afterwards, though, I felt a little bit… high. Good, but weird. My friend told me she felt that way too, after her first glass. Now I can relate it to the feeling I get after eating sushi. Food inspired endorphins or a probiotic surge or something… I have no idea.
Anyway, I’m not really a milk drinker. I drank it as a kid, but as an adult I lost my taste for it just straight. I love dairy, I love putting milk in things, but I don’t really get excited to drink a glass at dinner or anything. Anyway, I started to wonder why this milk was safe for me- or at the very least why it was somehow better than pasteurized… and what I found got me spiraling down this path. So thanks, milk.

Anyway, in short, what I learned about milk was that it was close to nature’s perfect food (the egg is a pretty close second). It has a wealth of vitamins and minerals and good fat and, in unpasteurized milk, helpful enzymes and protective bacteria. It makes perfect sense that milk is baby’s first food- doing everything from building strong bones to strengthening the immune system to helping create brain cells. This stuff is pretty nutritious. Many people argue (myself included when I realized I didn’t really have a taste for drinking it plain) that we are not supposed to drink milk- as hunter gatherers we didn’t eat anything of the sort. This is true, and there are certain cultures that never implemented it into their traditional diets and tend to have high instances of lactose intolerance. However, there are many traditional cultures that made it a big part of their traditional diet, and through the generations have produced a large population of people that can digest milk well. All baby mammals produce the enzyme needed to digest milk, but back then most people stopped producing that enzyme in adulthood. There are few that continued to produce that enzyme and over many generations it became a more dominant trait- which certainly benefit them when they started keeping dairy cows and goats and settled. Those individuals thrived and passed on the trait. There are still many people that are lactose intolerant/allergic to milk, however I think a large part of that has to do with pasteurization and the loss of traditional preparations- such as fermenting and souring the milk (this breaks down lactose and predigests some of the protein that some people are allergic to). If that seems gross, just look at yogurt or sour cream. Another example of a traditional preparation of milk is kefir, which is now making it’s way back into some stores as a probiotic drink.

Pasteurization was introduced because it was meant to keep people safer- I have no doubt of that. Large-scale production and distribution of foods leaves them subject to all sorts of opportunities for contamination (from both the production end and also the need for long shelf-lives at room temperature, etc). So the logic follows- heat it up and kill off everything in it and seal it up, it’ll probably stay edible. Yay! Now we pasteurize all sorts of things that were actually developed because of the helpful bacteria in them that helped to preserve them (like pickles, cultured dairy, etc). Pasteurization of milk was introduced during a time when people were moving off of their land and into cities. Cows were moved from pasture to crowded pens and given grain feed (making them sick). They lived in these filthy pens, drinking contaminated water and food that they couldn’t even digest. Milk started making people sick. Pasteurization served as a solution to this problem, and while some of the problems that we faced then have been solved (poor water quality, etc.), we still keep our animals in really horrible conditions and force them to eat grain and produce milk while they are sick- pumping them full of hormones and antibiotics. So, thank goodness for pasteurization.

However, milk that comes from grass-fed cows who are healthy and don’t live in their own poop is a different story. Any food is subject to contamination, that’s for sure. That’s why we do need to take some precautions. We’ve learned a lot about sterilization and I have no doubt that raw milk is safe if properly cared for. It also undergoes testing to screen for harmful pathogens, and after 4 years of regular consumption of it I’ve never experienced any adverse affects. In fact, everyone I know who drinks it is pretty healthy. Both Jeff and my sister had trouble digesting milk before, and they have no issue with raw dairy. So what’s the difference between raw and pasteurized milk? I’ll just quote straight from the Campaign for Real Milk website:

PASTEURIZATION HARMFUL: Many of these anti-microbial and immune-enhancing components are greatly reduced in effectiveness by pasteurization, and completely destroyed by ultra-pasteurization (Scientific American, December 1995; British J of Nutrition, 2000:84(Suppl. 1):S3-S10, S75-S80, S81-S89).

DANGERS EXAGGERATED: Although raw milk, like any food, can become contaminated and cause illness, the dangers of raw milk are greatly exaggerated. In an analysis of reports on 70 outbreaks attributed to raw milk, we found many examples of reporting bias, errors and poor analysis resulting in most outbreaks having either no valid positive milk sample or no valid statistical association (ResponsetoMarlerListofStudies.pdf).

USDA/FDA STATISTICS: Based on data in a 2003 USDA/FDA report: Compared to raw milk there are 515 times more illnesses from L-mono due to deli meats and 29 times more illness from L-mono due to pasteurized milk. On a PER-SERVING BASIS, deli meats were TEN times more likely than raw milk to cause illness (Intrepretive Summary – Listeria Monocytogenes Risk Assessment, Center for Food Safety and Applied Nutrition, Sept. 2003, page 17).

Interesting stuff, no? Here’s the link. They go on to talk about the specific nutrient degradation that happens with pasteurization, health benefits and healing that people have experienced with raw milk, etc. I have heard lots of personal stories about healing- from simply being able to digest milk again to the healing of digestive problems, also reduction in asthma and allergies, etc. Those are common ones.

The other thing that I really love about raw milk is that I know that everything was produced in a way that I can support. These cows roam on pastures- doing what they were naturally meant to do. The farmers can only support and sustain so many cows, so the higher prices you see are, in my opinion, a true price of food produced sustainably. I also get to shake the hand of my farmer, knowing that I’m supporting his family and traditions.

These are some pictures straight from the website of the farming coop I belong to.

The fact is, there’s some incentive for big business to keep raw milk scary and (mostly) illegal (also, if you think the FDA is impartial, you’re kidding yourself). First of all it enables them to even distribute their yucky milk, and to abuse cows to help them produce far more milk than they are meant to in harsh and unnatural conditions. If we all hop on the raw-milk bandwagon, then we’ve inevitably got a bunch of single family local farms that are making a good living and improving the health of their patrons… and that’s just not good business for big factory farms and corporations that run them.

The way that I get my raw milk is that I have to buy into the farm that I get it from. Essentially I pay an annual fee and sign some papers stating that I bought a share of the herd. It’s not illegal in Michigan to get milk from your own cow. Everything is legal, and I get my milk. I also sign off on all sorts of stuff saying that I’m aware that this is not pasteurized and that there’s living bacteria in my milk, etc. When I first got into it, I had several discussions with my friend about how bizarre it was that we had to go through those loopholes to get such a simple food. Of course it’s to protect the farm, and I understood the reasoning, but it made me realize that real food is somewhat in jeopardy. We joked at the time about how we wouldn’t want raw milk getting too popular- it might get taken away from us…

Next week I want to talk about the specific ways in which our access to natural food is in jeopardy, and about what we can do to help preserve our right to good, real food.