…and people are definitely starting to look at my belly. I went out to the food coop last night with our friend Doug (I got some mung beans for sprouting! Exciting!), and there were a few women who’s eyes were definitely on my middle area. It was as if they didn’t want to assume, but they knew. I’ve been noticing it with friends, too. They’ll start talking to me but they’ll be looking straight at the baby for a moment before meeting my eyes. He/she is definitely growing! I have to get used to this attention again. Last time I remember it making me feel a little self-conscious. I’ve never really liked being the center of attention- particularly when it results in comments like "You’re HUUUGE!" or "Wow, you’re gonna pop any day!!!". Although those comments are a little ways off. I hope. Anyway, Doug, with his ever-wise perspective thought I should compare it to what life would be like with a goiter. Haha. I definitely prefer the baby-type growth, thank you.

Jeff was swept up the other night with an urge to take belly pictures. Jeff is hugely attentive in so many ways, but noticing things like this and wanting to document it on film is not really one of his specialties (unless it’s some project he’s been working on for a while). I can tell he wants to notice and do more in this area, so I didn’t fight him on it, even though I was battling a headache and it was 10pm. 🙂 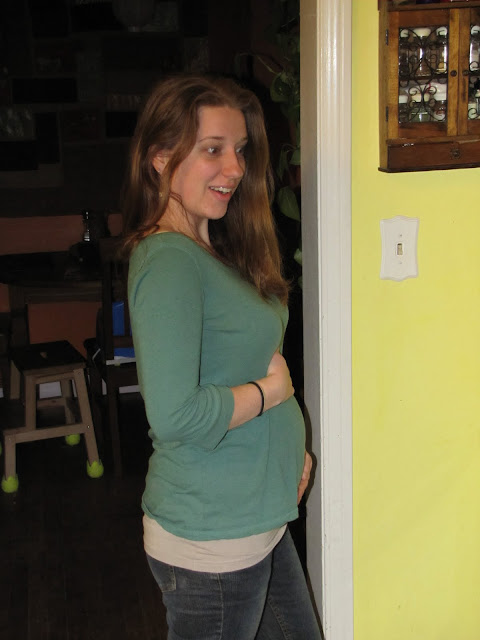 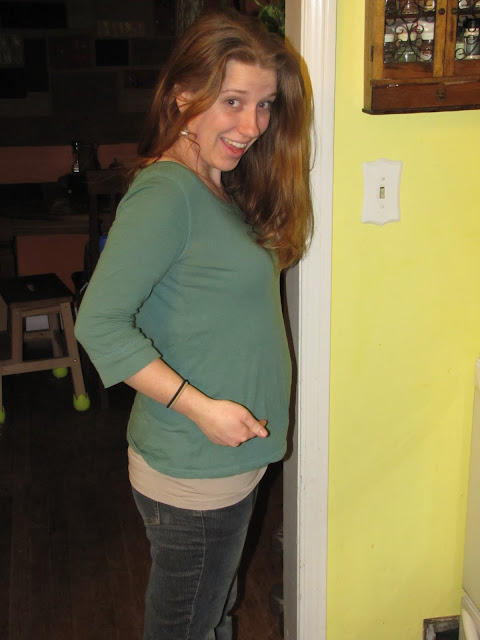 Vera is largely disinterested in the baby, but I think it’s tough to explain it at her age. Mostly we talk about her having to be careful not to jump on my stomach so much! I’ll have to get some books about it from the library, and I’m sure it will get easier as baby grows and is more obvious to her. I’m so excited for her to be a big sister! In the way of preparation (other than alerting her to the actual new human entering the family) we are working on a few things with her. We started trying to settle her in at night and then leave the room for her to go to sleep by herself. And… it’s working! We leave the door open, we listen to her play for a bit, and then she’s out! It’s been about a week of this! I’m so excited. I think it will be harder for nap, but I have such hopes. I anticipate sleep times with two kids (one of whom you can’t say "hey, wait your turn for the milk…") being potentially stressful for me, and I’d love to be able to simplify it in any way. We’re also working on potty training, and she’s pretty receptive. I’m going to pick up big girl underwear for her soon, and we’ll give it a real try. She’s great on her potty right now, and it’d be SO COOL not to have two babies in diapers this summer. That’s about it, really. I’m also going to try to get her used to sleeping more often in her room, but I’m not in a huge rush. She slept in there one night and I actually felt kind of sad about it! I missed her! She woke up around 2am, though, because she’d fallen head-first into the space between the bed and the wall… we’ll have to stuff some pillows in there or something.
You know, despite being much more relaxed this time around and admittedly forgetting that I’m pregnant from time to time, I’m feeling really excited for this. It’s such a ride to be on.

—
Oh, we started seeds the other day. Broccoli, brussel sprouts, celery, chamomile, cabbage, quince, onions, leeks, and parsley. Soon I’m starting tomatoes, peppers, eggplant, and lettuce, and probably some other herbs. It’s so fun and easy! I actually think it’s way easier to do this than to juggle the trays and trays of plants from farmer’s mkt with a toddler in tow. That was… challenging. Jeff and I have a nice set up in our big walk in closet, but I’d love to do something with shelves at the top of our big windows, to conserve on energy. Sometimes this stuff seems daunting at first, but once I do it I always feel like it’s easier than I thought. This morning I’m going to my sister’s to help her start her seeds. Spring is almost here! 🙂

"Making a decision to have a child–it’s momentous. It is to decide forever to have your heart go walking around outside your body."
— Elizabeth Stone