Jeff was supposed to go back to work this past Monday, but he found out that he wasn’t on the schedule until today. So we had an extra 3 days to have fun together, and it was lovely. It’s my first full day alone with the kids, and I must admit, it’s a little intimidating. I mean, it’s fine, of course. Kids up, fed, Asa had some fussy time, he fell asleep, my sister came over with her kids for a bit, and now both are sleeping. Really, I can do this. BUT, come 6ish and Asa brings out the big guns. It’s that bizarre "witching hour". He just screams his little head off for a while, off and on for about 3 hours… or just until his poor parents’ nerves are completely shot. Ugh. I remember it with Vera. It was short lived, but felt like it would never end when we were in it. As the time comes nearer, I’m tempted to get stressed out. BUT, I’m consciously working on being in the moment today, and so I won’t jump the gun here. I can do it. Yes I can. I just might hole up in the evenings until this phase passes, which I think might be okay. It was horrible going to people’s houses for dinner and baby would just scream. They’d all say it was okay, but I’m just thinking, who wants to hang out when you can’t even hear? I mean, it’s nice that people don’t mind and don’t want me to feel bad about it, but it just makes for a crazy noisy visit… I’m thinking about it. No thinking about it yet.

Anyway. We let the chickens out! We’re not really supposed to, but I think it’s fine as long as we’re out there with them. I think they loved it. 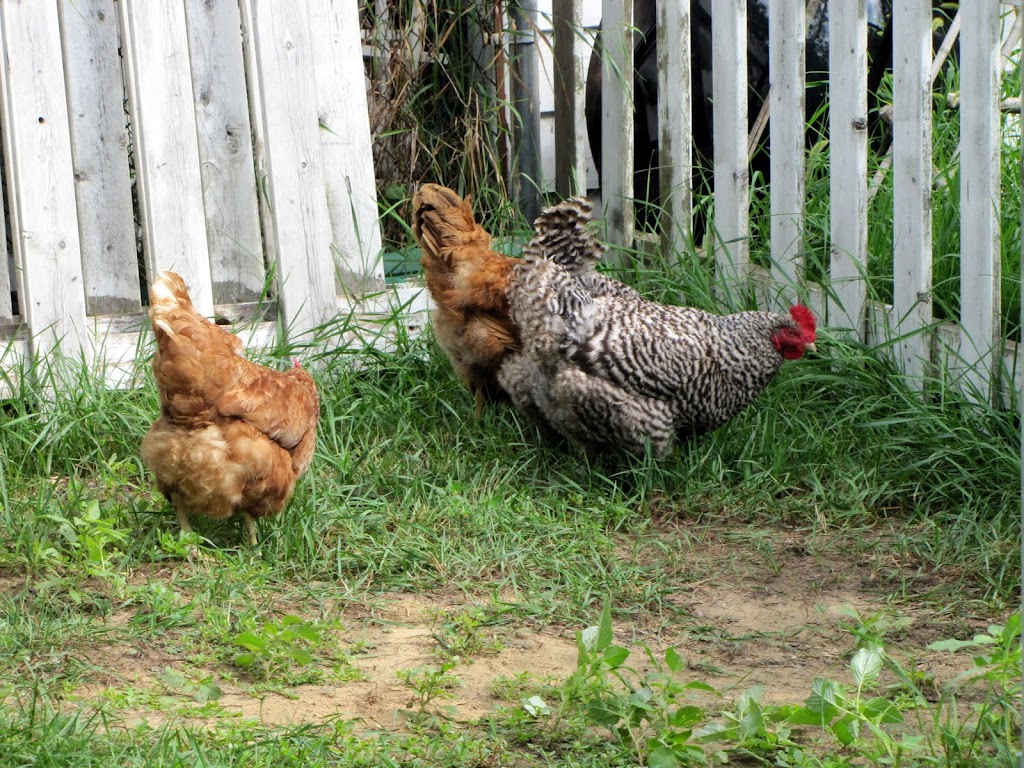 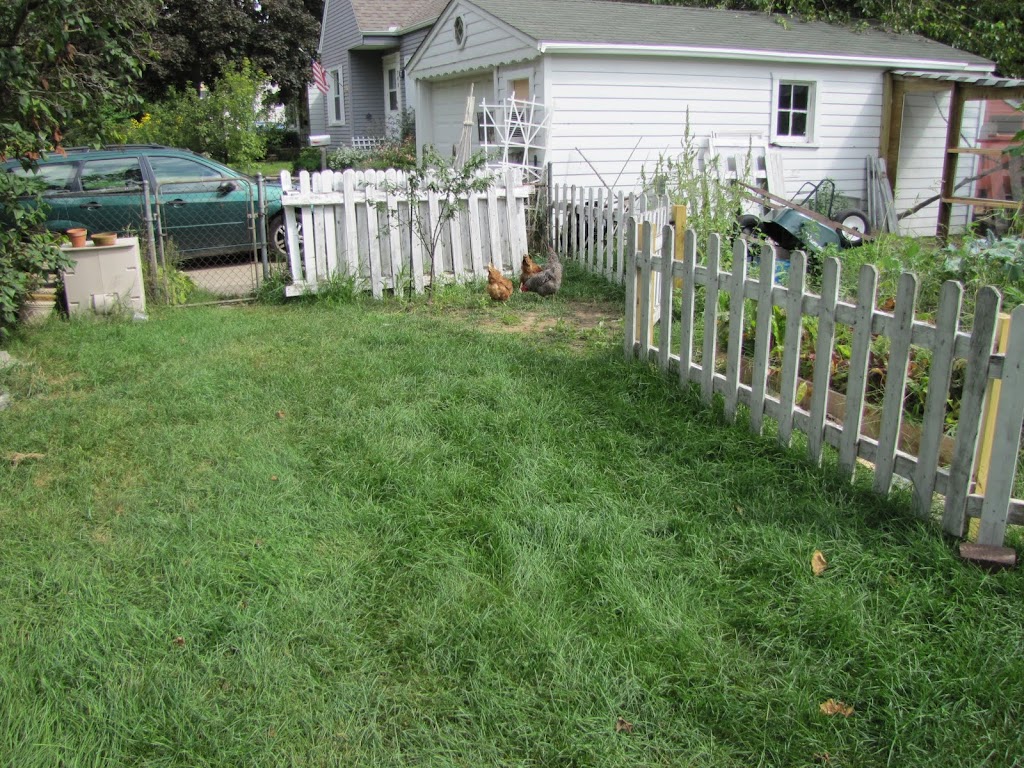 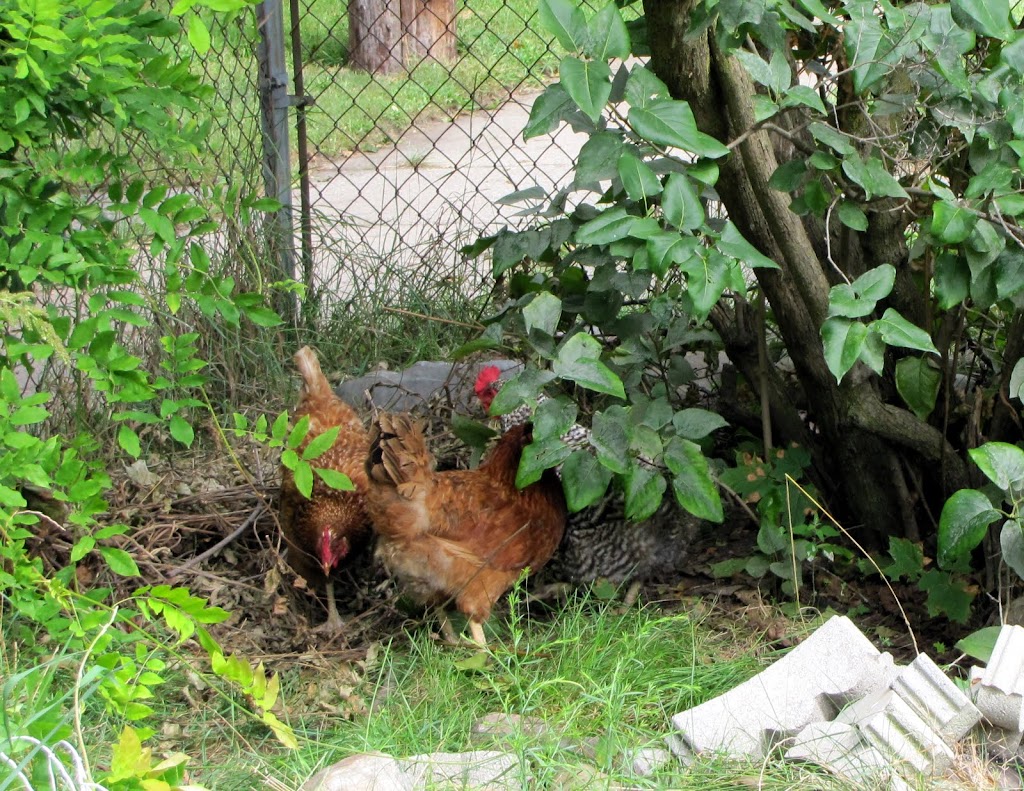 And my sweet little. He’s so SO sweet. I really love him. I just need to keep focusing on that when the work of it is hard. Today I actually said the "Serenity Prayer" out loud. One good thing about the crazy infant fussies is that they are humbling and remind you of all the things you’d love to work on- patience, love, gentleness, surrender, and yes, serenity. I’m praying lately- and not to anything in particular, which I guess is important to mention because the last time I regularly prayed was definitely TO a God. But, I’m not sure that I believe in that form of "God", so it’s feeling more like open meditation- a conscious release of energy and a recognition of my needs and desires. It’s good, I think. Plus, I’ve never minded using the word "God" to represent my higher power- I’m finding that I’m not a huge stickler for specific spiritual details, which I think was actually some of my problem with being raised religiously. I of course accepted the concrete truths that it presented, but ultimately I think it ended up being less of a relief/sign of truth to me than I think perhaps it is to others. As an example, I suppose I’ve never been able to be comforted by the idea that a single book would guide us, especially not one that is full of contradictions and problems. Even as a child some of the stories were unsettling and scary. Although I think to many, having such a concrete guide is a comfort. In my early faith life I consistently encountered situations and rules that didn’t quite feel right or loving, but were backed up by this doctrine or that. Now, it’s somewhat freeing to have love be my spiritual guide, taking what I can use and leaving what I can’t- it doesn’t magically transform the world into my playground or anything, but it does open me to new experiences and feelings about my spiritual self that were formerly off limits. Like the idea that I just don’t have to have the whole truth. It’s good. I guess I don’t really talk about that stuff here much, but parenting just provokes those thoughts in me so often. The desire to be a better person, to know myself better, to do right by the world. Pretty simple stuff, no big truth here. Anyway. 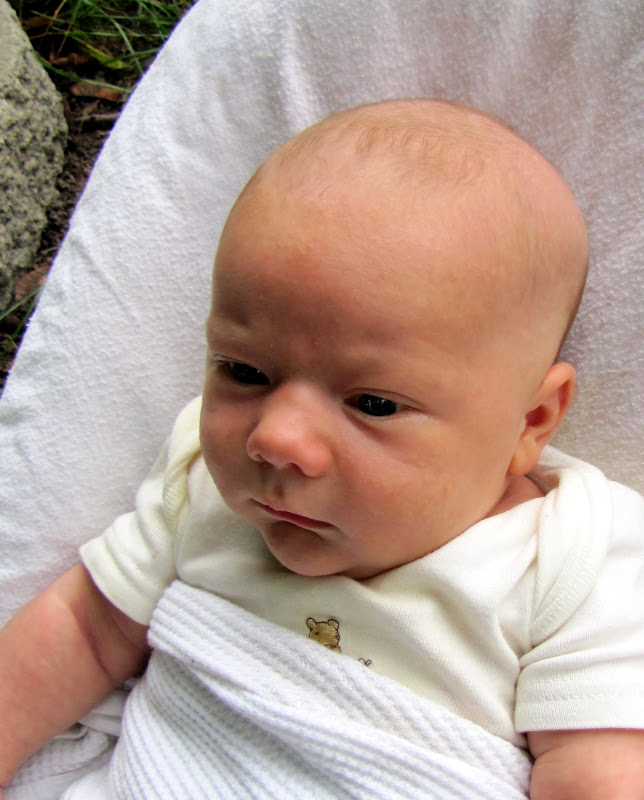 I weighed him this morning and he’s already 13 pounds. That means he’s gained over 5 pounds in just a month! 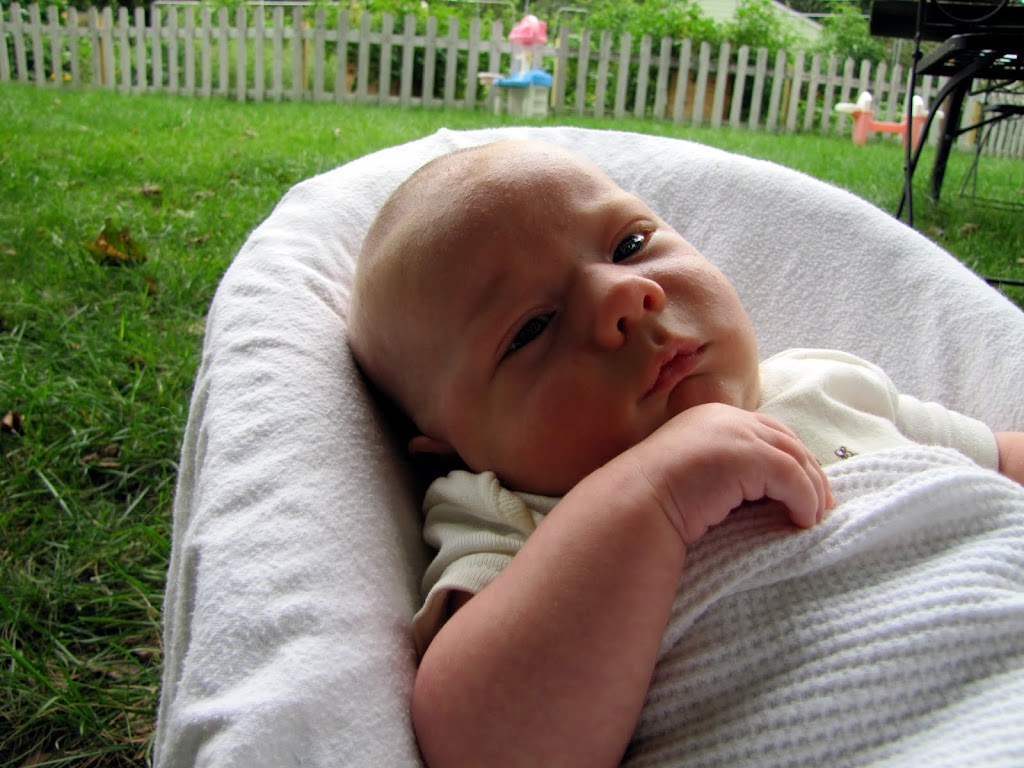 —
We went to the beach yesterday, even though it was a little chilly. I loved that it was cooler, after this crazy heat we’ve had for the past couple of months. Jeff took Asa for a walk at one point and V and I had a little one-on-one time. It was so nice. I realized I haven’t been able to have any with her, basically since Asa was born. That’s kind of the deal, he’s pretty attached to me for now, but it was so nice to have a little time to play. I swung her around in the water, we walked along the beach, I helped her jump and play on a big rock, and we snuggled when she got too cold. Love for my big girl. 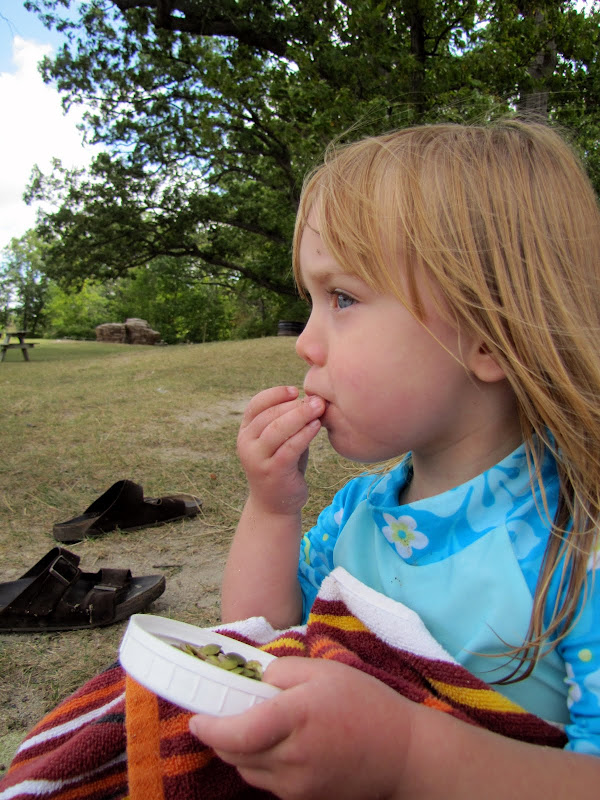 Most of the time, though, was spent doing this. 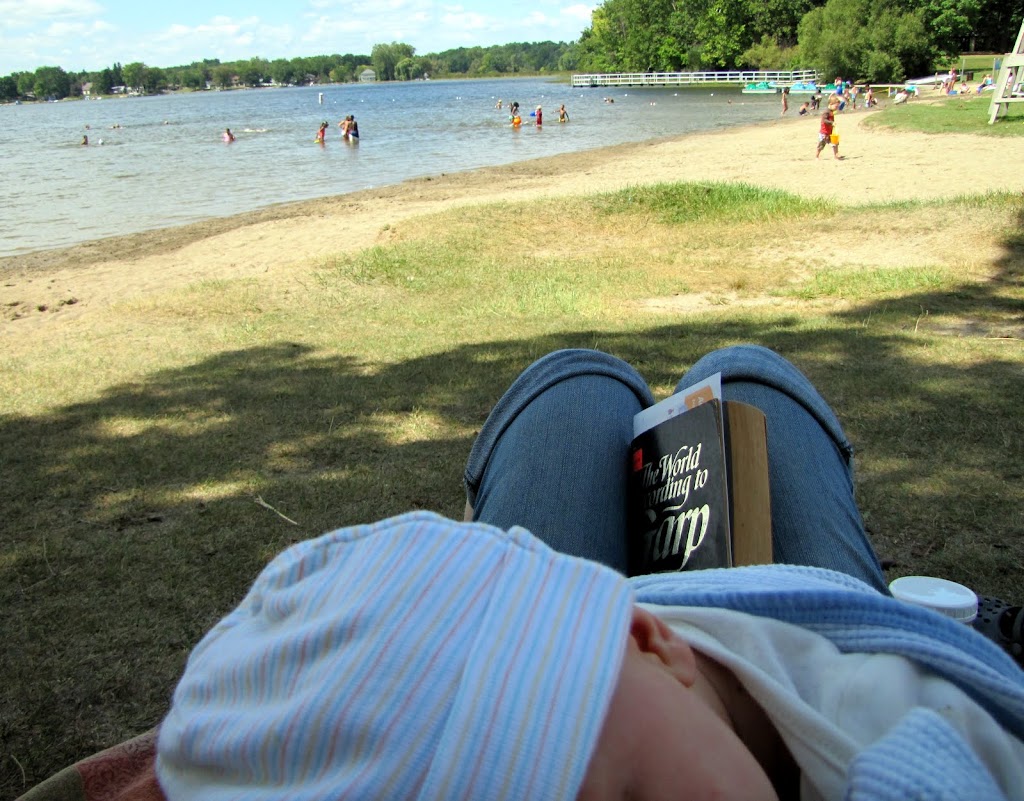 I really loved having Jeff here all this time. I’m so glad we had the savings to do it. Yesterday he was saying how much he was going to miss being home with us, and I just sort of blurted "Yeah, it feels sad because you have no business being there…" Which was a weird thing to say, I guess, but with further thought I think it’s totally true. Spending so much time away from your family, your people, is just not natural. It’s not like Jeff doesn’t want to work or contribute, but for him to spend the majority of his waking hours doing something that is, were it not for money’s sake, totally pointless in his life… well it’s just silly. Now we could just say it means that he needs a different job, but that’s not it. He likes his job- he’s good at it and people love him there. It’s that he belongs with us, working beside us. That should be his job. It’s only in this crazy way of living that it requires him to leave us to fulfill that job. Because you know, we can’t live for free now. No one can. But we all used to, and we all mourn those days, in one way or another. Hopefully someday we’ll see that way of life again. But he is working on the side doing this IT stuff for a local company. He’s responsible for building that side of the business, and things are looking good. If it all pans out, he’ll eventually (and hopefully soon) be working mostly from home, and setting his own schedule! We’re really excited about this.

—
14 more quarts of tomatoes. We may just make our goal yet! 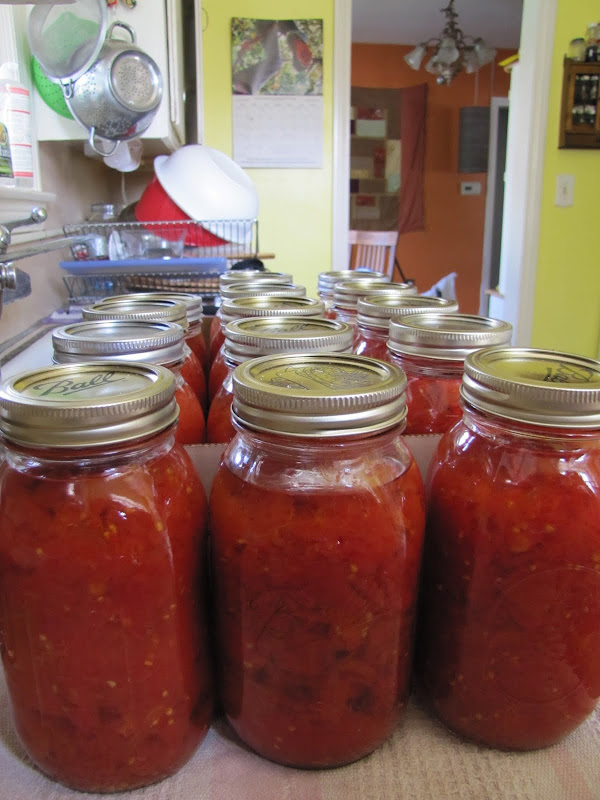