My little brother came into town as a surprise, and so it’s been a flurry of family activity. He lives in Texas, and is going to be touring in Japan in the early fall, so I may not see him again until Christmas time- and new baby will already be 5 months old! It was nice to see him. He’s been gone for over two years now, and I’m grateful that each time he comes home it’s a brief period of excitement and catch-up and then it’s just… normal. I love that. Although this visit Vera was shy with him the whole time. I forget how much of a presence the men in my family have. They are tall and strong and have big voices and booming laughter. It makes me smile and want to give them big hugs, but for Vera, a new big man (my little brother!) asking for a hug was a little overwhelming for her. I make a point to let her be shy, though. I let her bury her face into my chest and I cuddle her close until she’s ready to emerge. I remember being shy like that- I’m sure she gets it from me (because it wasn’t Jeff!). To some degree I still am that shy, I just don’t get to jump up in someone’s arms anymore… so I’m happy to let her have this time. I do wish that she saw him more, I just know that she’d get a huge kick out of him once she was comfortable. I’m sure he feels that way too. It’s just one of the sad things that accompanies my brother’s vocation.

Today is beautifully open for me, so I’m going to take this time to reset my head and my spirit and try to get organized. It’s also much cooler today than it has been, so I’m looking forward to spending most of my time outside.

Our potatoes have grown so fast lately, really everything has. We’ve already had to put up the second panels and bury the plants some more. I really hope these towers work and give us tons of spuds! 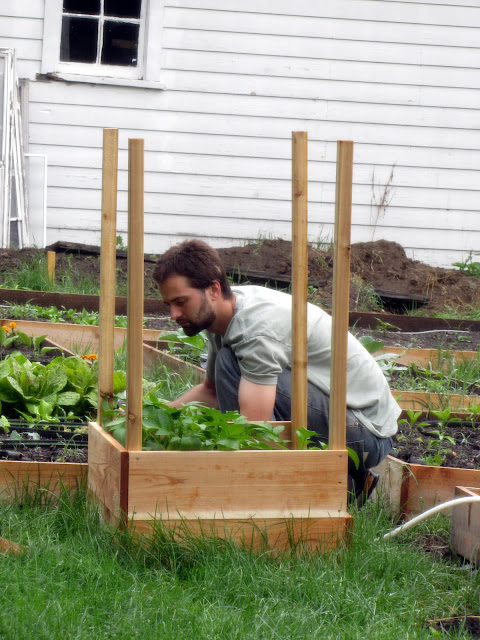 Our neighbor gave us some extra plants, which I’m happy to take! I’m learning so much. I thought that I didn’t care to start lettuce indoors because they’re so easy to plant outside. I underestimated how grateful I would be for those first few salads, though. Next year I will definitely make a little space on those shelves for some leafy plants to enjoy early in the season… that is if we can get them to grow! Oh, I’m also learning that old seed is not that great… I saved all my seeds and was very optimistic, but new seeds are definitely the way to go. I’ve got bare spots and some replanting to do as a result. 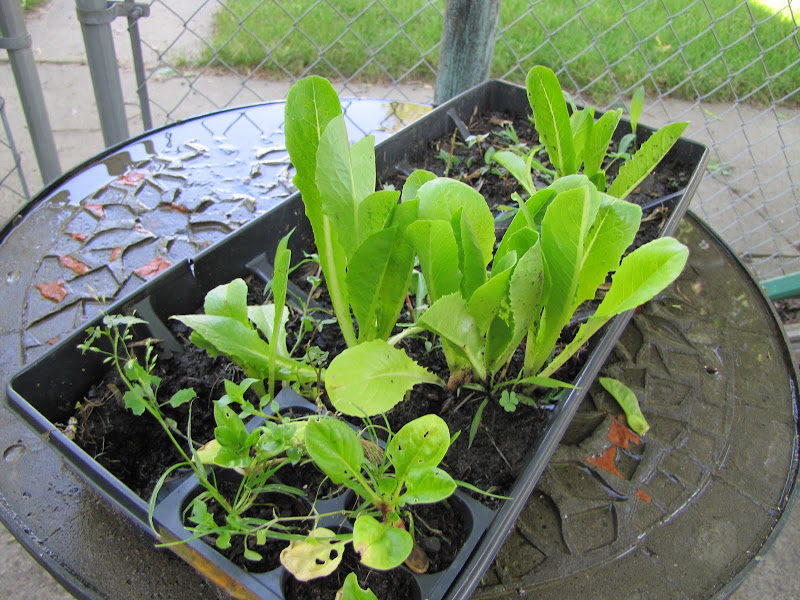 Beans just popped right up! Everything is getting so green. 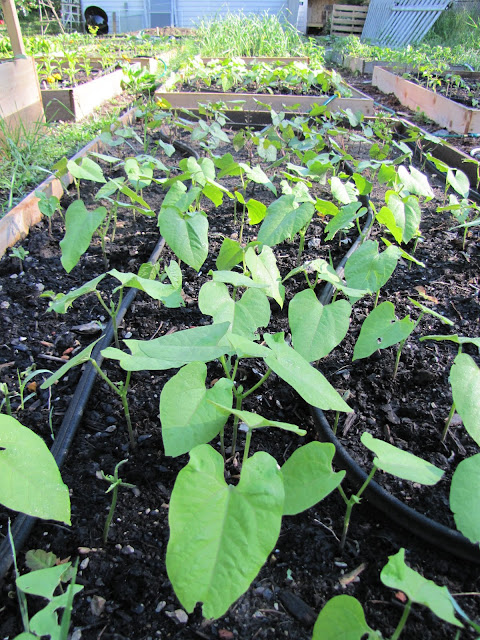 I’ve also got no shortage of maple seedlings to weed. so. many. maple. babies. 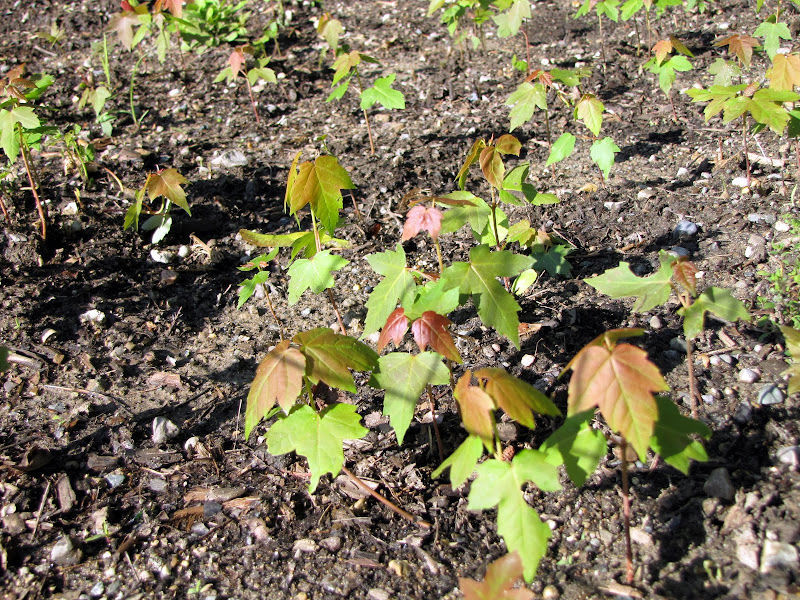 Being just six weeks away from my due date is definitely making weeding and bending over for long periods kind of challenging. Thankfully I have an awesome gardening stool that my parents gave me that is a life-saver! Although, I can’t complain much. I was thinking about when I was this pregnant with Vera, and I was far less comfortable. I remember at Christmas that year I was about 7 weeks away from my due date, and I felt so much more challenged. It was hard for me to get up off the ground. I’m sure part of it was that I had an office job, so I was much less active and able to adapt. This time around, I’m a little rickety by the end of the day, and I’m finding that I’m slowing down a little, but otherwise I feel pretty normal. It’s so nice! At this point, though, I can tell that I would benefit from a daily stretching/yoga routine- to keep me strong and flexible. Things are just getting rounder. 🙂 Sometimes Jeff says "You’re totally pregnant now!" and I just roll my eyes and say "I was totally pregnant at the beginning, too…" But I know what he means. It’s a presence now. As for this little sprout- baby is super active. My belly moves all over the place, and I just can’t wait to meet this little person. Jeff said that he’ll miss me being pregnant. I’ll miss it too. I wonder if my tune will change a month from now…

Vera loves this little dirty plastic bear. She calls it her "Teddy", and some days nothing else will do. She went at it with a pen the other day and I didn’t think much of it. Then yesterday Jeff pointed out that it looked like she had signed her name on its head. Sure enough, I see a "Vera". Haha. My genius child… 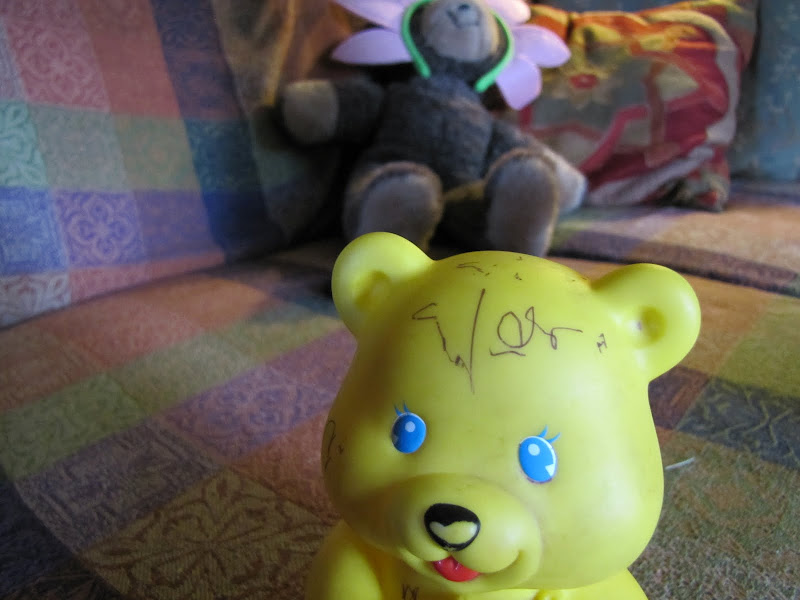 She’s such a spunky, silly, willful, sweet, clever, beautiful little girl. So so verbal, she cracks us up all the time. She’s constantly in the dirt and getting banged up. I hug her while she cries a lot these days. It’s never for long, though, because there’s so much to explore. The other day I was taking a shower and she was outside with Jeff. Next thing I knew she was plopped in the shower with me- naked and caked in dirt from head to toe. The water was practically black as it went down the drain. It was amazing the amount of dirt on that girl, and I’m pretty lax about that kind of thing. I asked Jeff what happened and he said "She was playing in the dirt…" Uh huh. More like swimming in it. Builds the immune system, right? 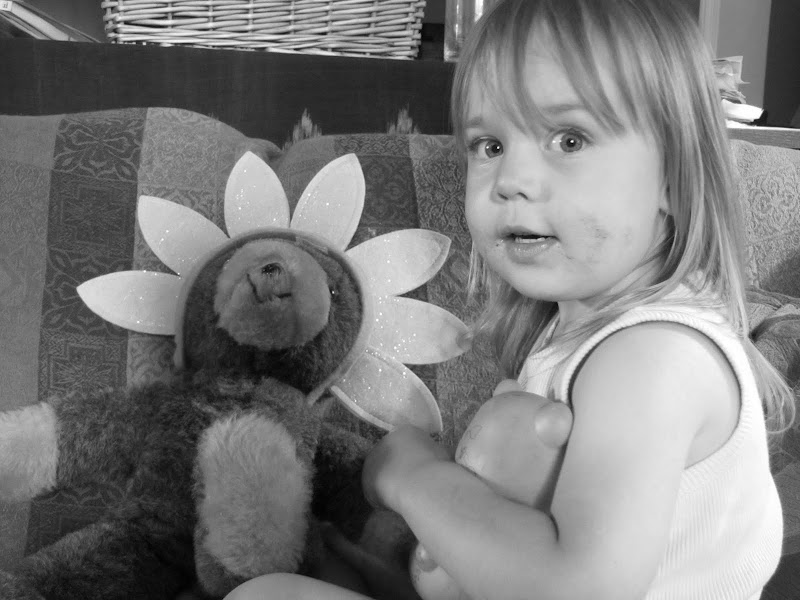 Oh yeah, we’ve been working on the chicken coop, and decided to wait until the Saturday after next to get our chickens. I’ll have time to order a book and we realized we wanted it all to be a little more finished before we bring the birds home. No rush. We’re having fun. So over the next two weeks we’ll paint the coop and finish it all up, partially build a piece of the greenhouse that will be up against their run, build the chicken wire enclosure, and finish fencing the garden area (basically to keep Maya from bugging the chickens).

FRUIT! Oh how I love fresh fruit. Our baby cherries are just starting to turn color, and strawberries are finally ready to pick. We’ll go picking next weekend, and probably lots after that. We need lots of berries… Food storage begins! I’ll be drying, freezing, jamming, and fermenting all those strawberries, and of course lots of eating them fresh. 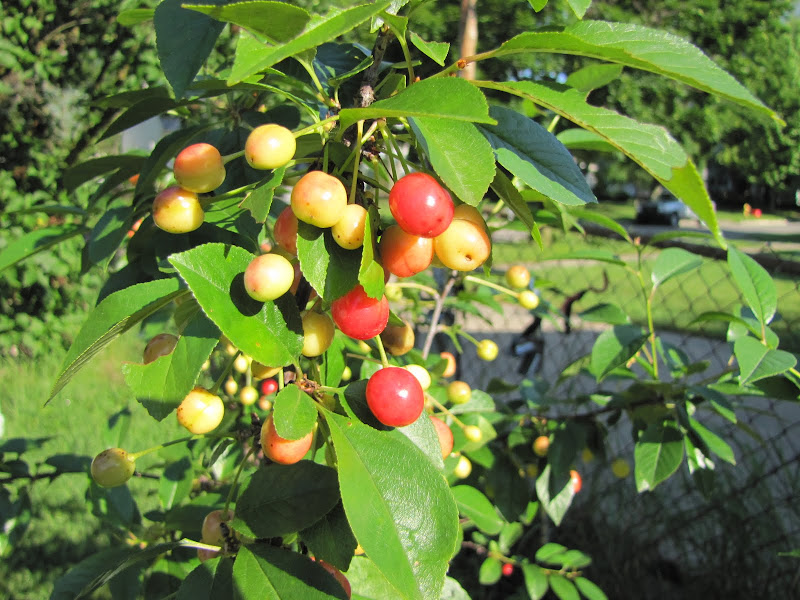