It’s been a lovely couple of days. Full of people, food, music… it’s as it should be. Jeff and I were incredibly thankful that we didn’t have to run around like mad like we always do- the schedule just happened to work so much better for us this year. We also had a little bit of anxiety about how it all would go down with the kids… like what would they get? Will this be a holiday where we feel like we’re compromising our values? I was really encouraged. The kids got books and nice sturdy lasting toys, mostly made from natural materials. I got great stuff- books (great books. I will share them with you as soon as I get a chance to dive in…), some great art, a shirt that says "farm lover" on it, these awesome wrist warmers that my sister knit, and then my other sister made us a little glass vase for herbs… it was a really nice time. The only thing that was a little less than great was that sweet Vera had to watch other kids get stuff that she is just not going to get- meaning stuff like new my little ponies sets and Disney Princesses, etc. Just new and plastic, basically. Each of her cousins got stuff that I could see made her envious. But, I’m going to likely have to weather that storm for years to come. She was a good sport (for a 2 year old). I had a discussion with my sisters about that issue, and we reminisced about all the stuff that we wanted but didn’t get (Barbie being a big one), and now we either are neutral about it or we fully support my parent’s decisions. I mean, we whined about it all as kids, but in growing we saw the sense in many of those things. So, I’ll just have to be consistent, and really try to pass on the joy of giving to my kids. Because really, it’s so much fun. 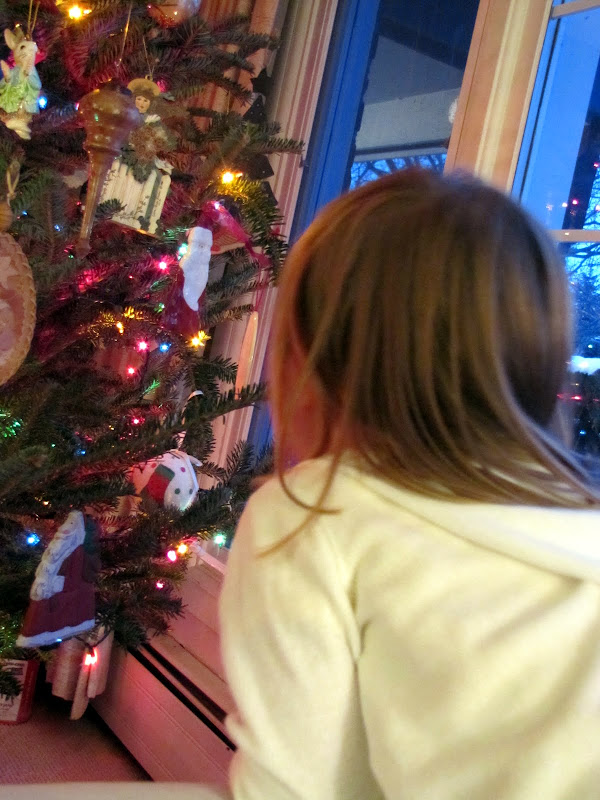 I had grand plans for my crafting this year, and soon enough it got whittled down to a few basic presents. Trying to craft late at night after a long day with kids is not exactly the most realistic plan… so now I know. Either I need to simplify or start in the summer… Still, Jeff and I were able to put together nice homemade presents for everyone. For the two sets of kids on Jeff’s side, we made these cloth nesting dolls resembling their families. Credit here. I like to give them things that they can play with together, that inspires some imagination. I’ve gotten them simple musical instruments, last year I made them cloth playscapes, etc. It’s a fun challenge. 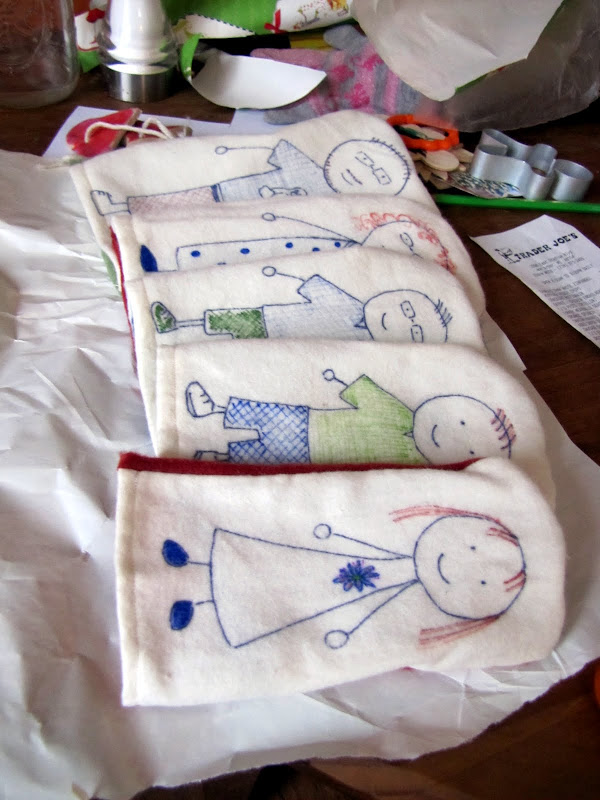 Vera made these ornaments… with only a little help from mama. 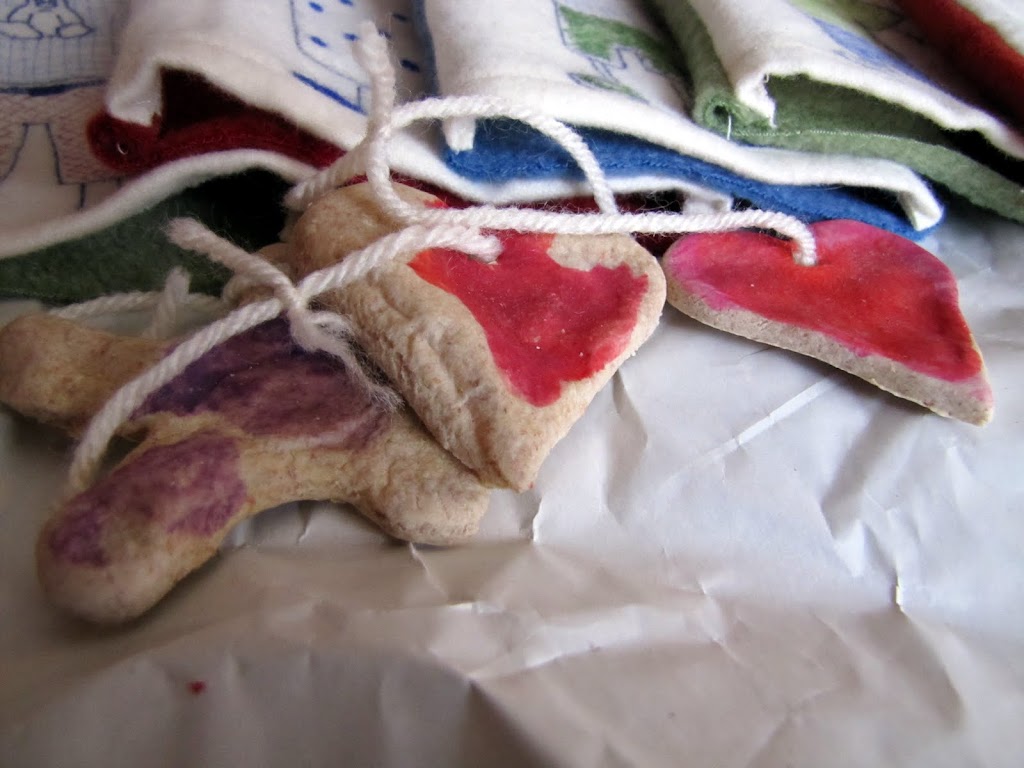 Tuula had been wanting a long nightgown, and my sister had been having trouble finding one for her. I guess they often are only knee length or so. Anyway, I decided I would make one for her for our little winter solstice celebration, with a complimentary one for Vera. And of course, it had to be purple. With bell sleeves. Yes. 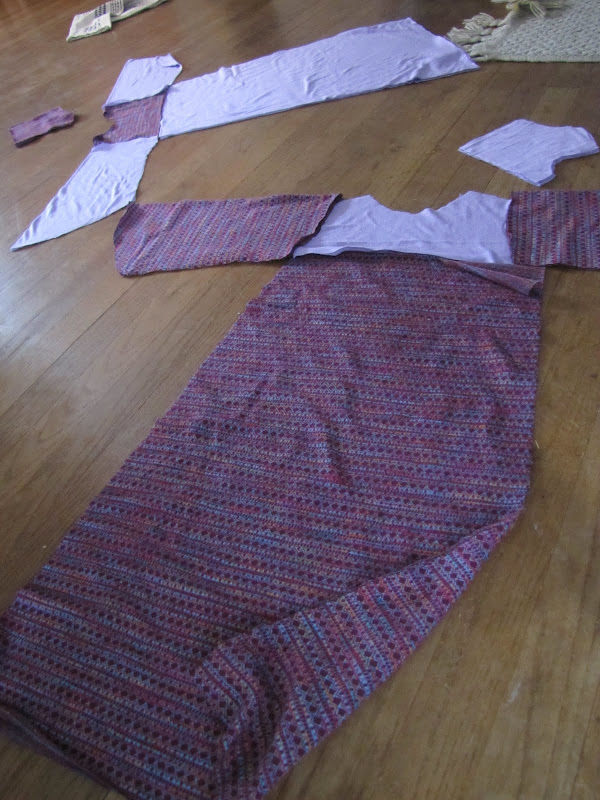 And little fleece slippers for Max. 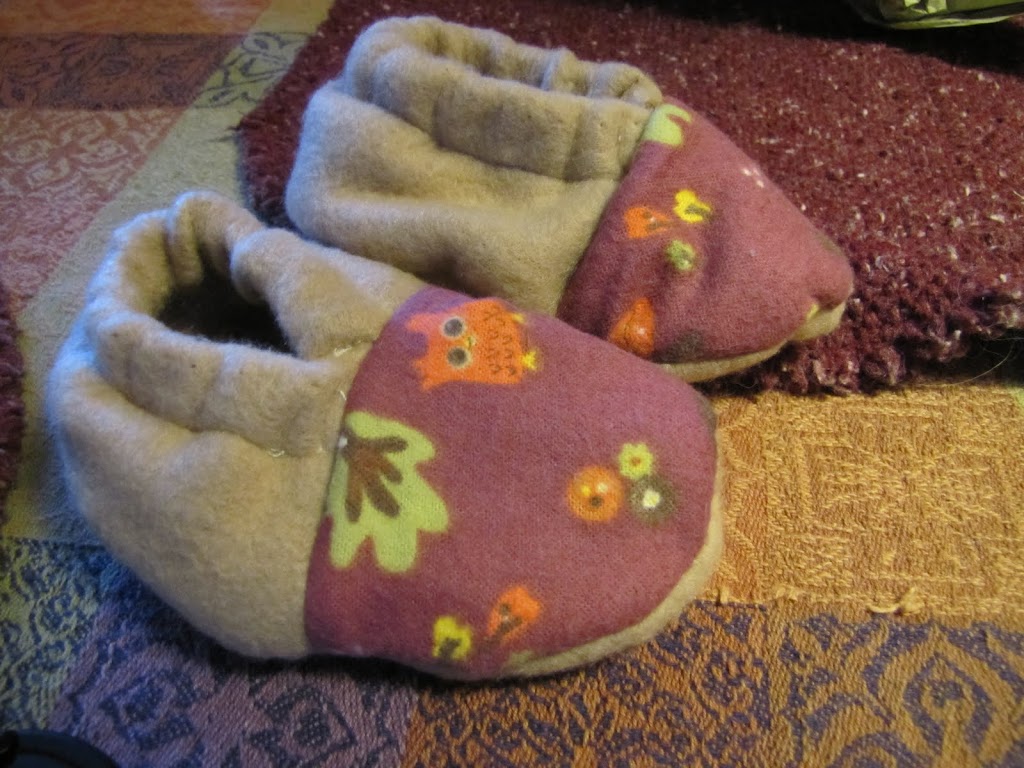 Did you know that it’s very difficult to get good pictures of moving toddlers in dim lighting? Especially when you don’t really know what you’re doing with a camera? Yep. Well, I did my best anyway. The nightgowns were a hit. 🙂 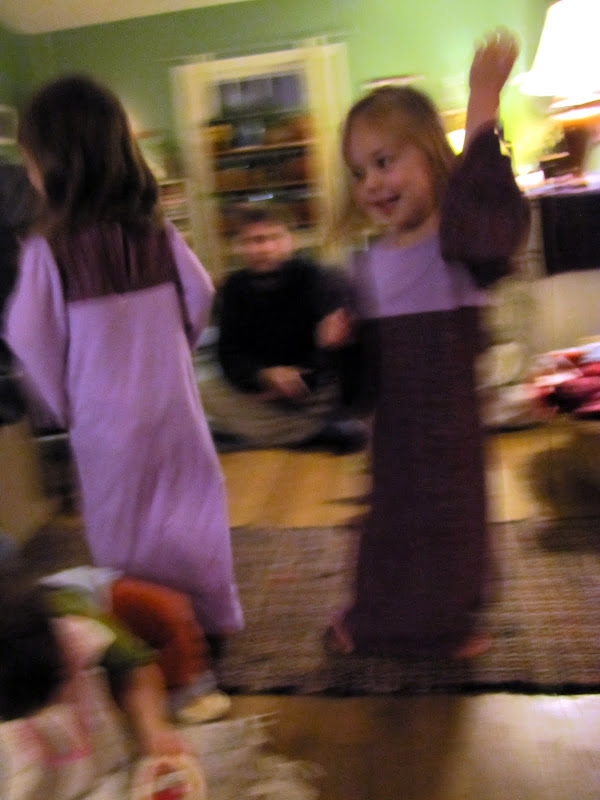 I was asking them to pose and they just kept hugging each other and falling over. Who could complain, really? My sister laughing in the back is great, too. 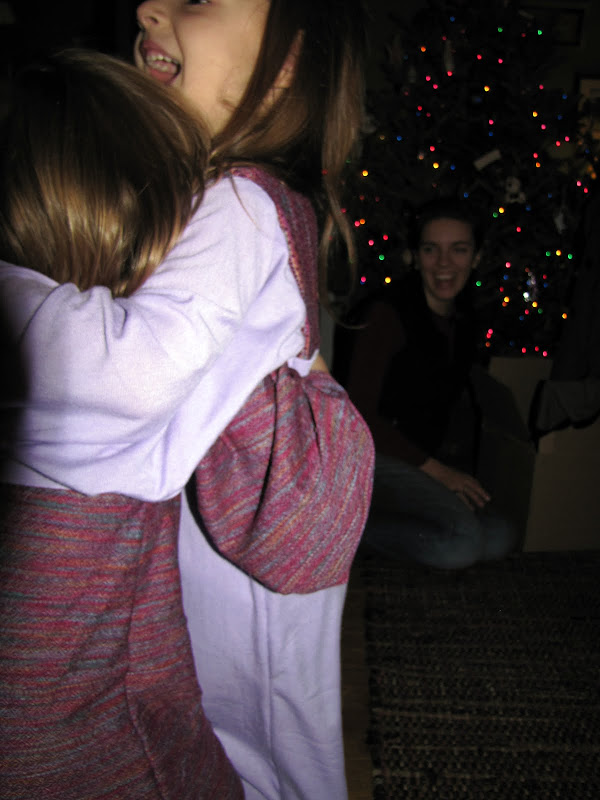 Finally I got a good pose. Don’t you love the foot point? I was also able to finish Tuula’s "Big Sister Doll". I gave it to her back when Max was born, but I wanted to give it a face and fix up the hair a bit, and so I finally got around to doing all that. It was great to watch them like these gifts. I can totally see why parents go overboard sometimes. 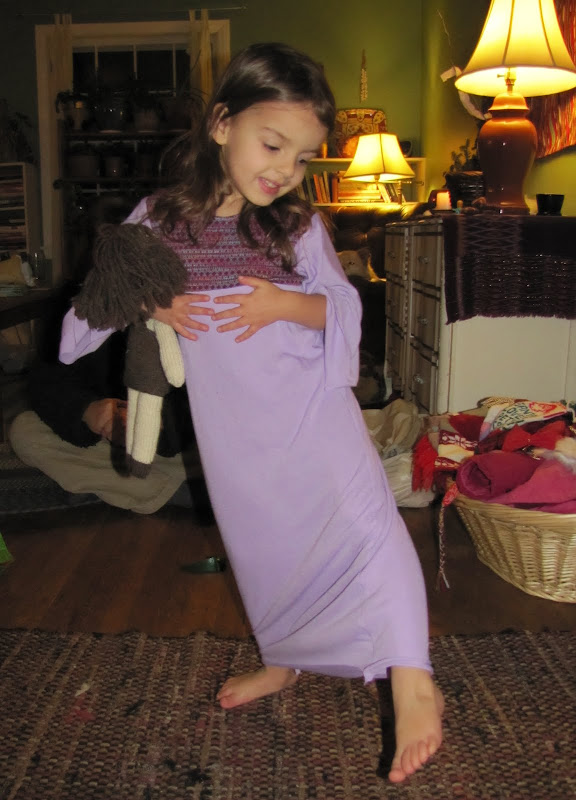 Our solstice gathering was really nice and low-key. Just a few of our closest friends, some warm food, lots of candlelight, and a couple of presents. My sister read a story to the girls all about the death and rebirth of the sun. I loved it! I love forming these new traditions. One of the big changes happening in the new year, for us, is my sister and her kids are going to be living with us for a couple of months. She and my brother-in-law are getting a divorce (which is really the best thing, we all agree), and so they’re trying to sell their house and move into a new place that’s better suited for them. Jeff and I talked and realized that we wanted to offer them space with us, if that would be helpful for them in this transition. They thought it would, and so in the next week or so the three of them are going to nestle into our big open room upstairs. We’ll make meals together, help each other with cleaning and childcare, and just be together. 🙂

We decided to make felted soaps this year. They were a hit! I’d been seeing them all over the internet, and I also got one as a gift recently and totally love it, so I tried it out. It was easy! 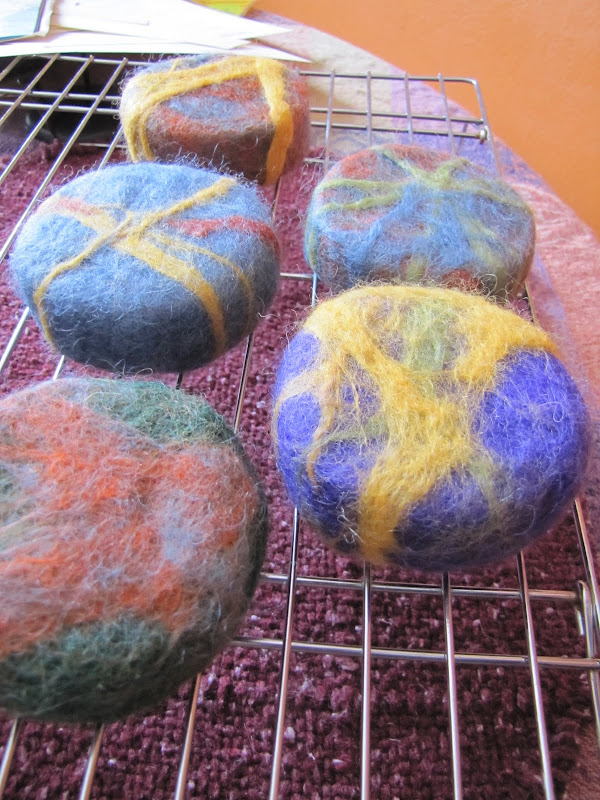 Jeff also made these beautiful soap dishes out of some scrap cedar. Along with the homegrown luffa, it was pretty nice all together. 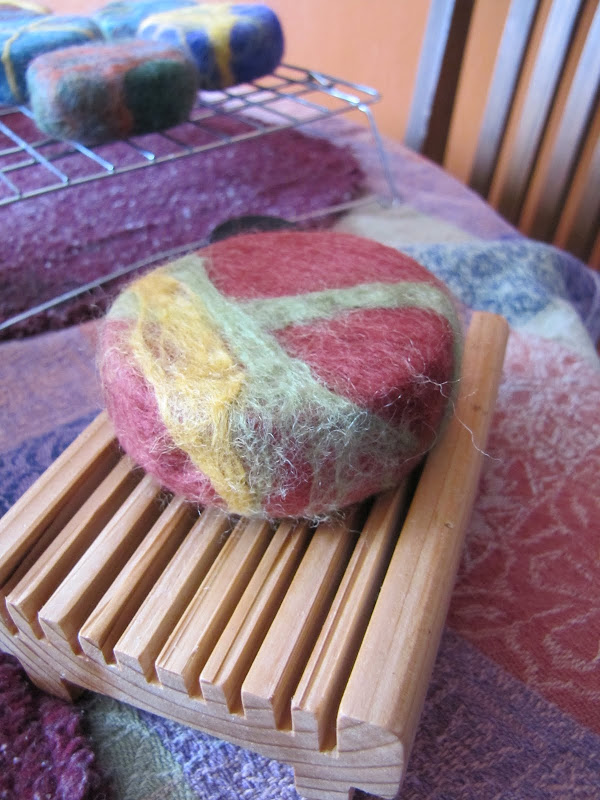 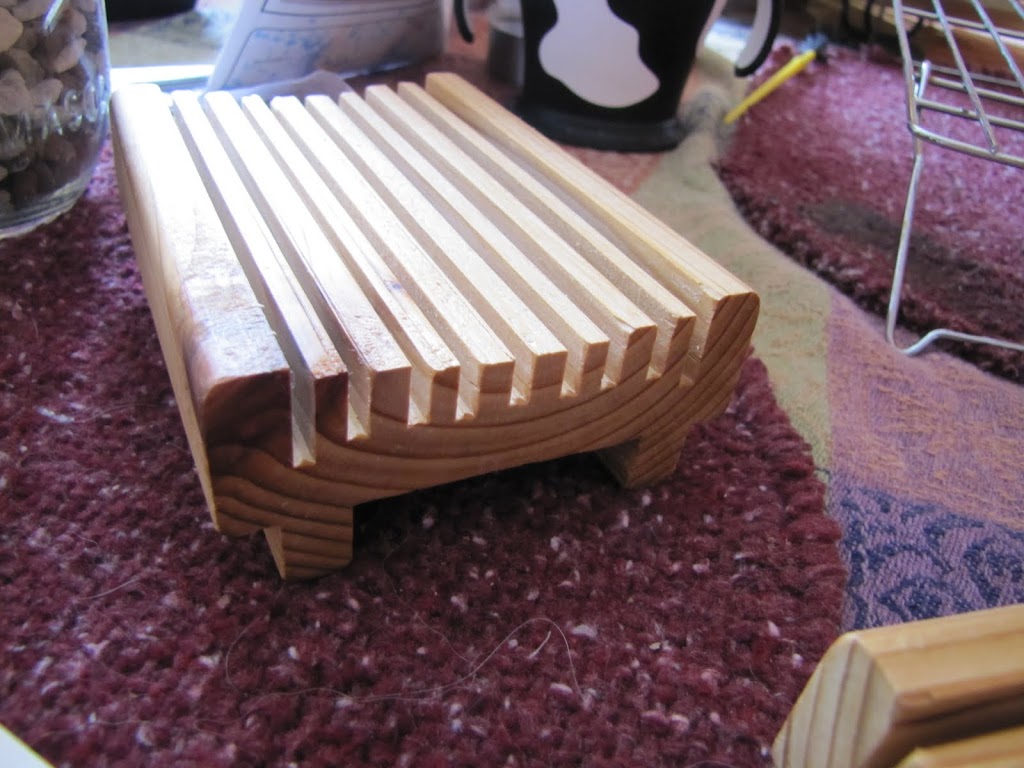 We also put together some of these paperwhite narcissus gifts. I was given a few bulbs a couple of years ago from my cousin, and they were so beautiful! Seriously, just a taste of spring in the middle of winter. 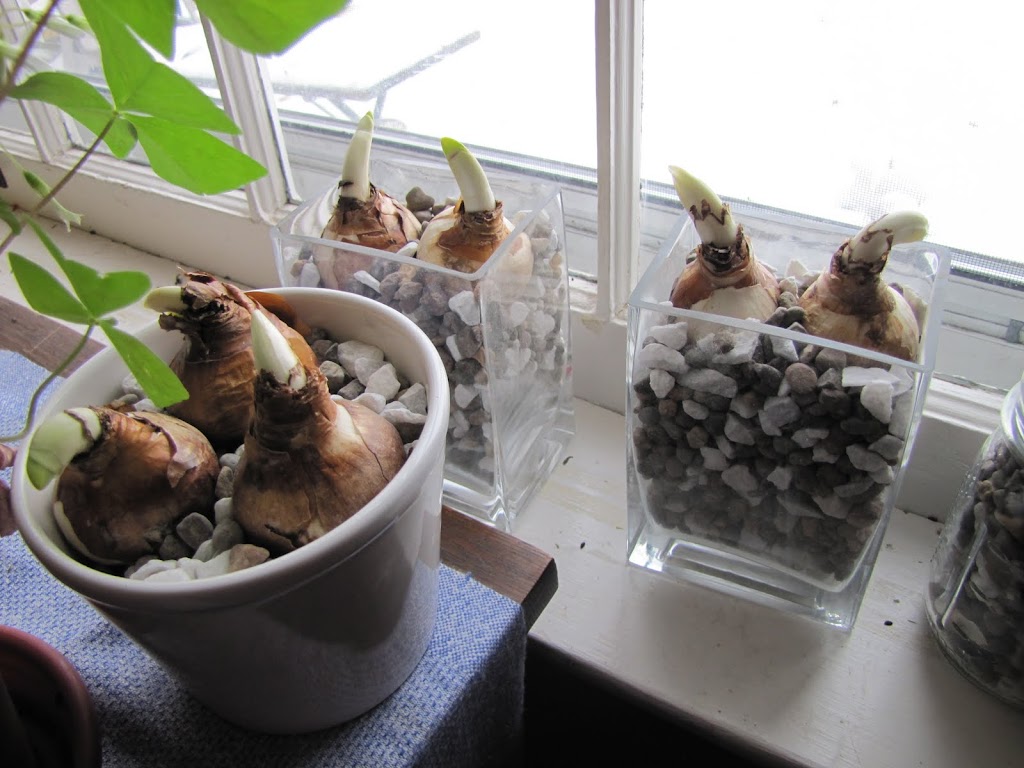 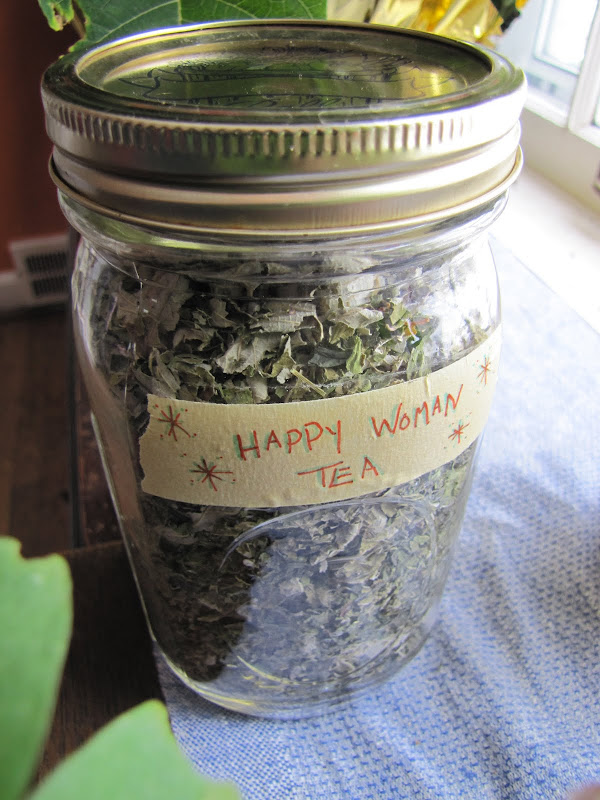 Max was so funny. He was so enamored with everything, especially all the snacks. That boy can eat. We caught him here with a bunch of crackers, each with just a bite or two taken. So funny. He’d also hover a cracker over the bowl of dip and then look up for approval, as if to say "Yes? Is this what you do?" 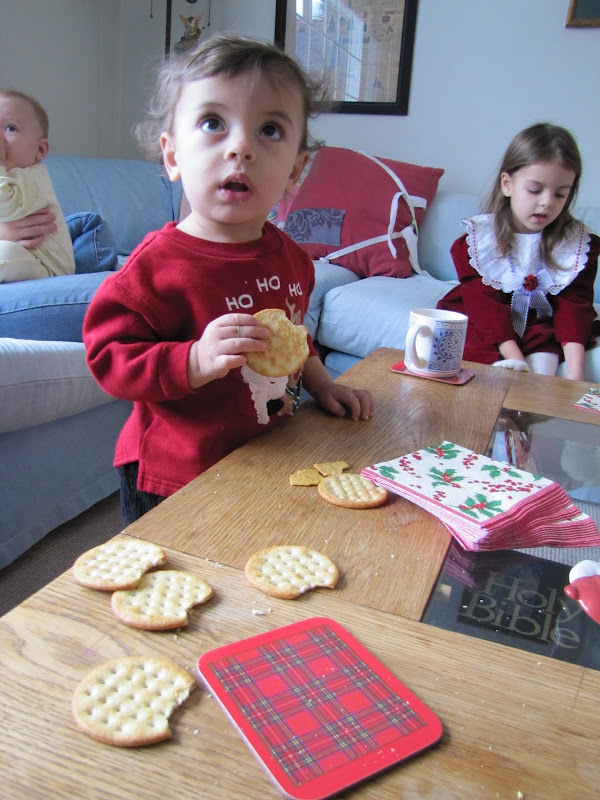 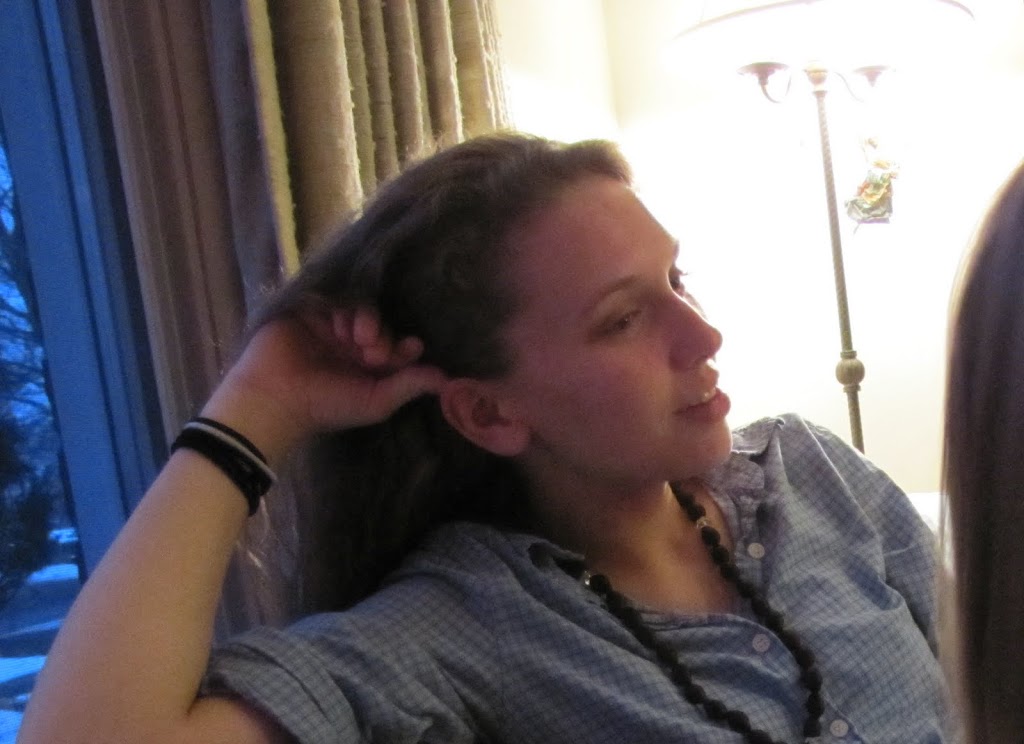 I also made these block crayons for little kids in the extended family from broken crayons that we had. Credit here. 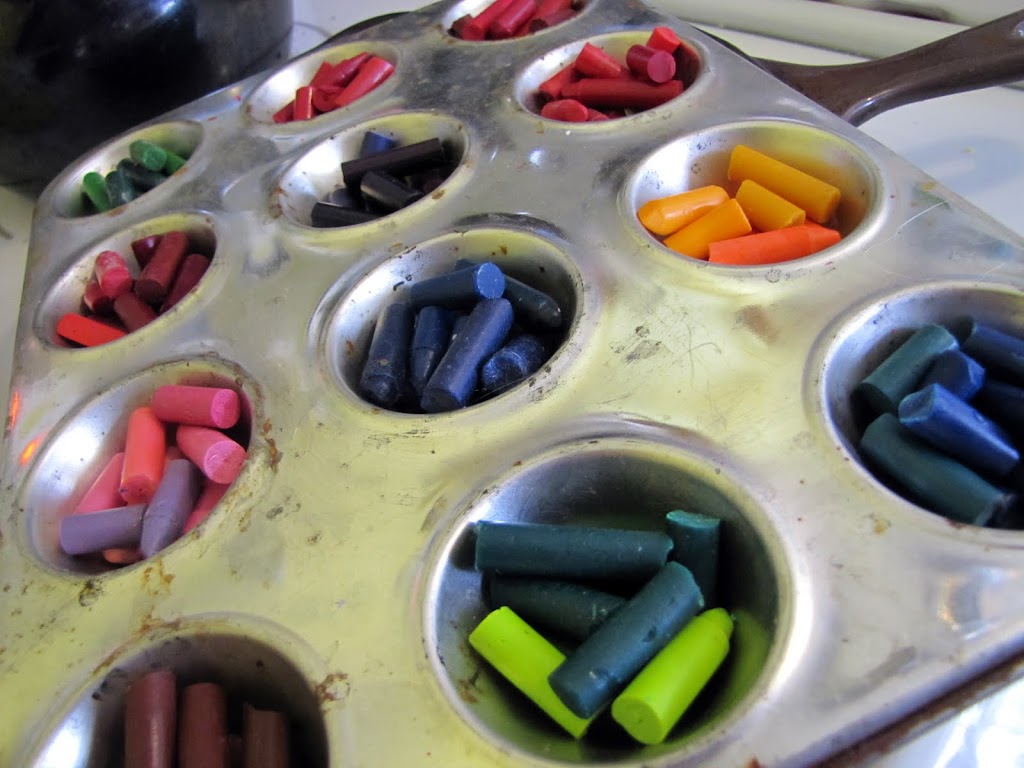 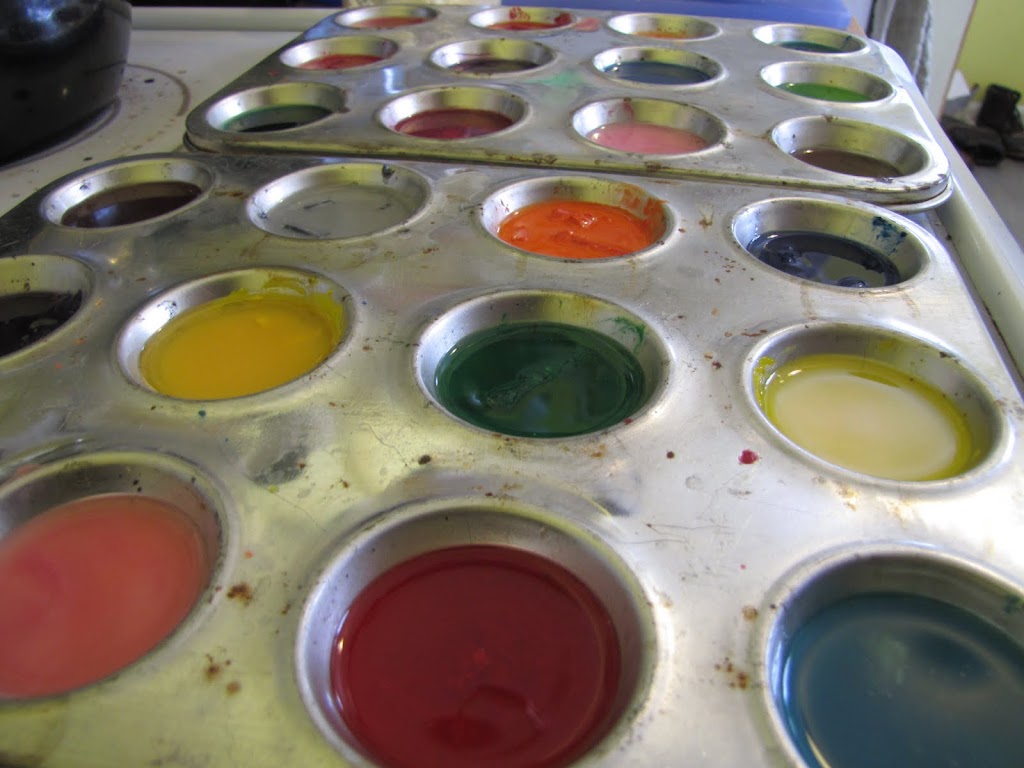 While we were waiting for those to cool, we had a little baby photo shoot. People kept asking me how much he weighed, and I had no idea. So I weighed him, and he’s 20.5 lbs (9.3 kg). Big boy! He was five months on the 24th. Time is flying. 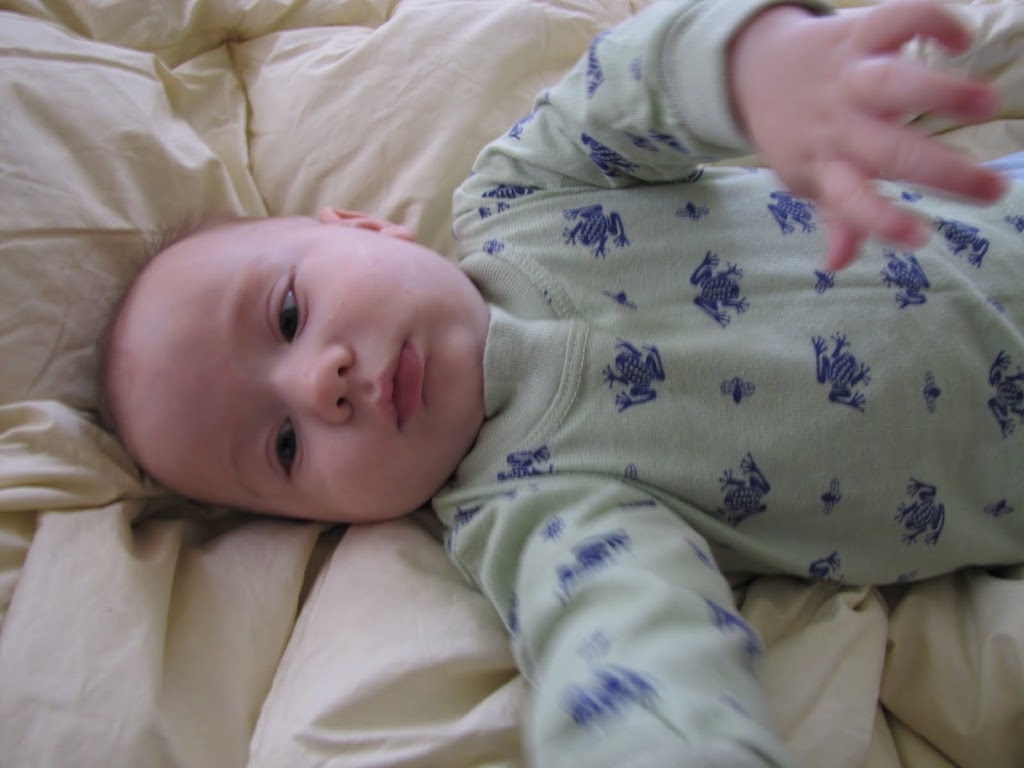 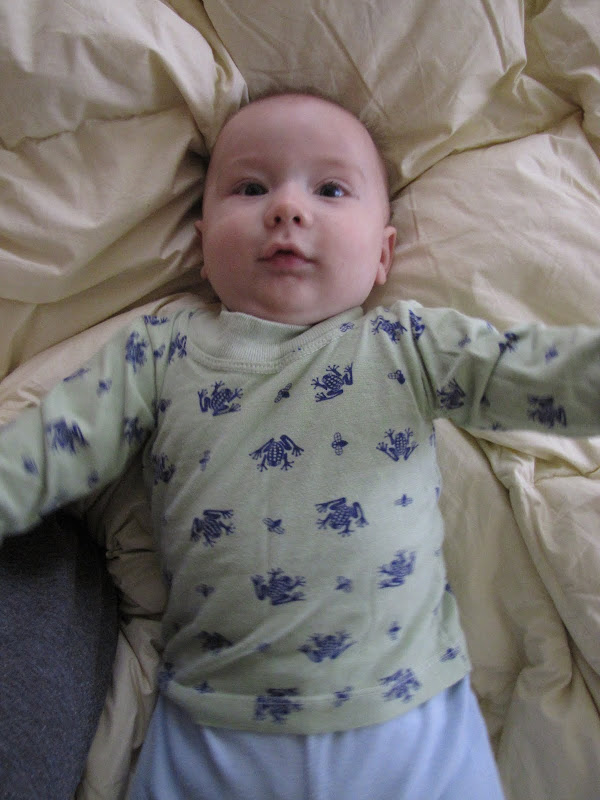 My happy baby is getting his first two teeth, too. The bottom two- they haven’t broken through just yet, but they are close. Teeth! 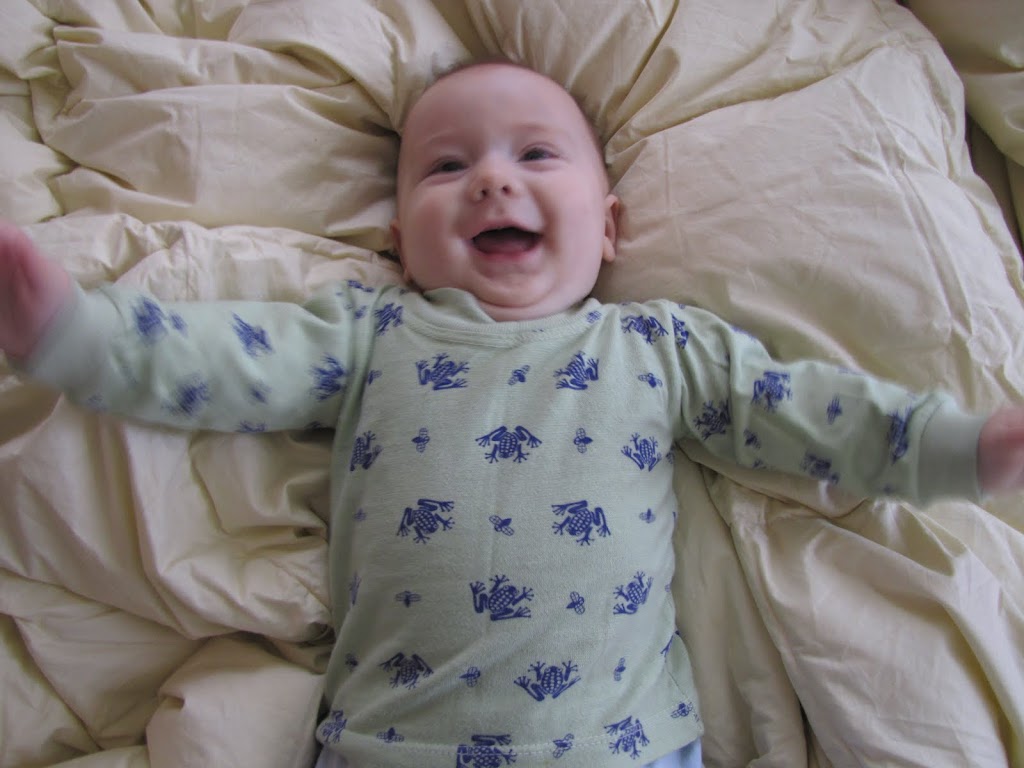 The finished crayons. Some of the pigment seemed to settle, but they work! I’m definitely going to be doing this again for my own collection soon. 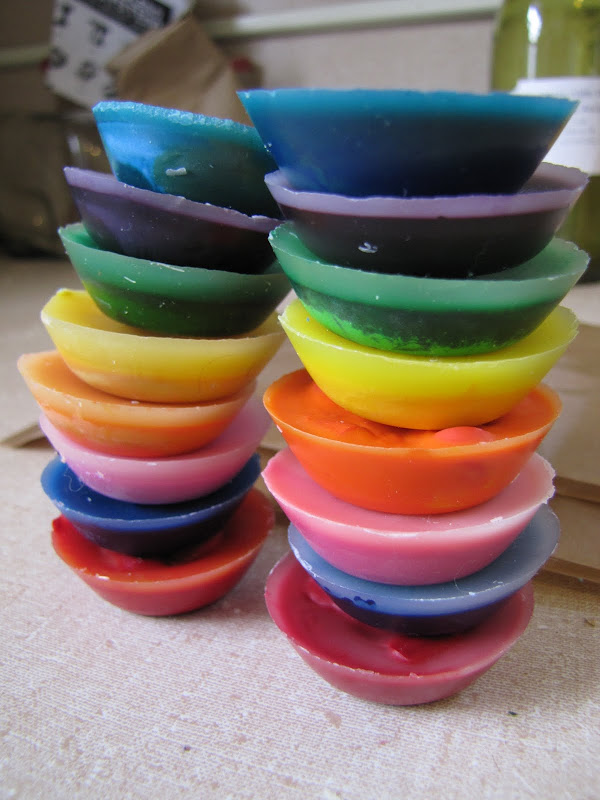 We also kept hearing that we needed to get a family picture together, but I refuse to go into Sears or wherever to get one taken. We just did it ourselves. It wasn’t nearly as hard as I thought it would be. The trick really was getting Asa to look forward. We only took like 10 pictures, and there were two with Asa looking straight on, one being blurry. So, we chose the other one. There were some nice outtakes, though. 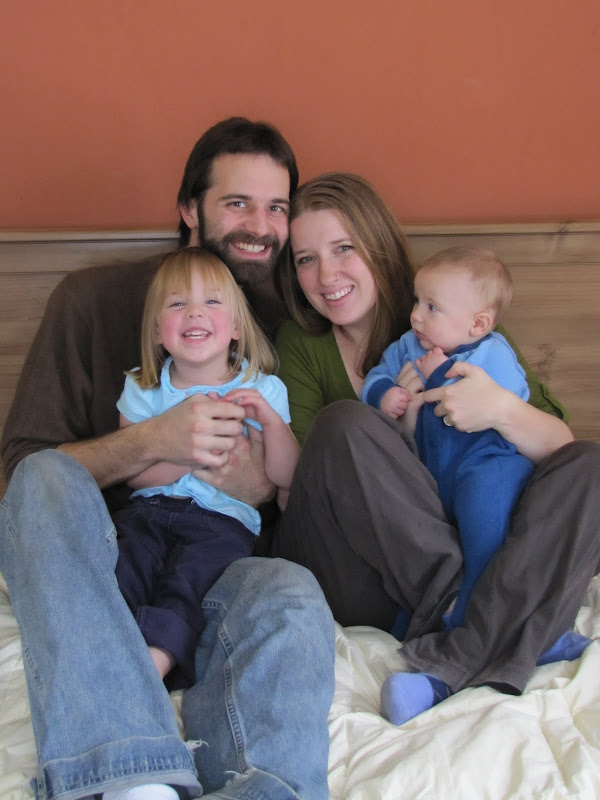 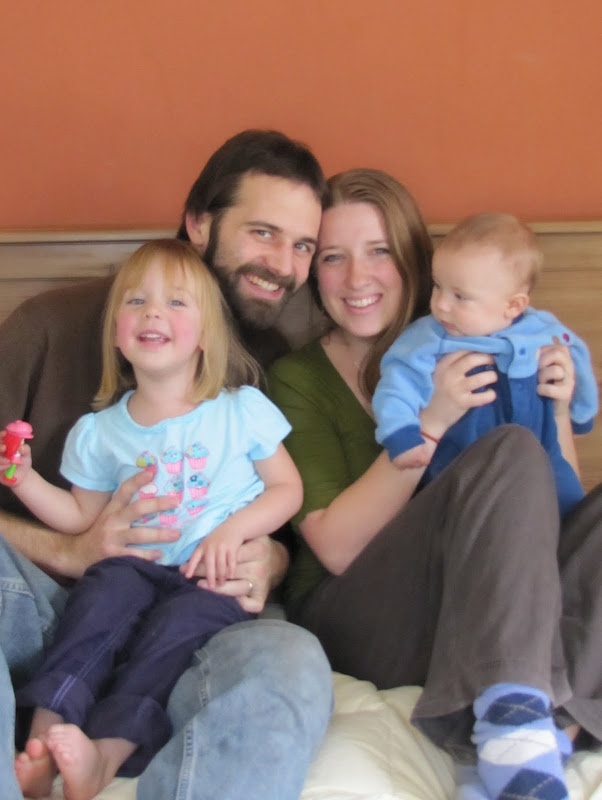 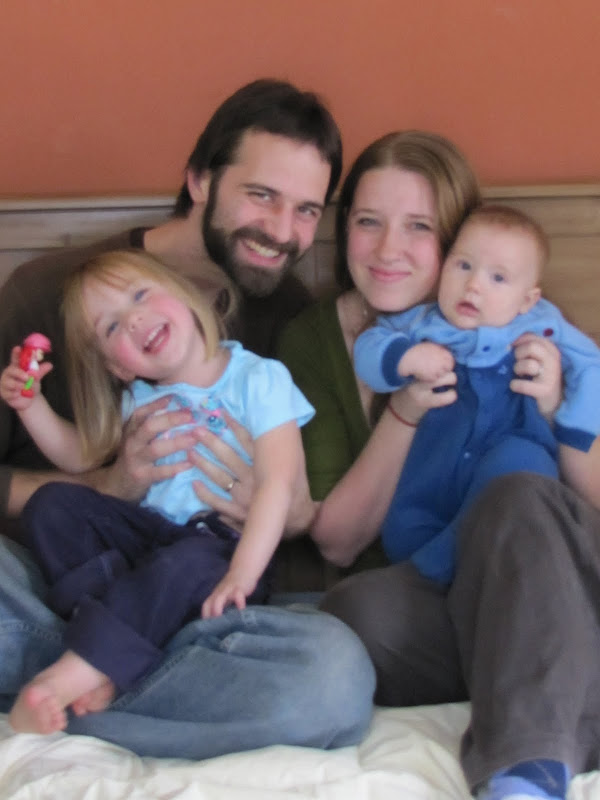 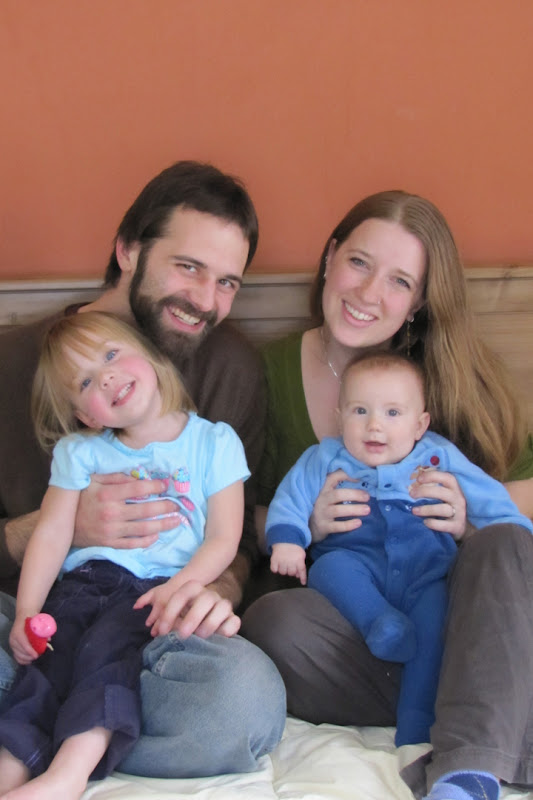 That’s it! I hope you all have had a great few days, and are welcoming in the light and the new year with people you love. The thing that I’ve learned recently is that family (chosen or birth) is really important. We need people in our lives. We’re animals, you know. There’s a lot wrong with this holiday, in my opinion, but one thing I think is good is the time together, especially in the midst of these cold, dark days. Thinking about the people in our lives, and allowing them to be close and to influence us. I’m gaining an appreciation for all of it. Regardless of whether or not you are close to your actual blood relatives, I think having some people around you is so so important. Jeff and I are starting to see that we really can’t do this whole life thing alone, and there’s so much joy to be had in community. So much to learn, so many challenges, so much growth that can happen. Not to mention all the love I have for these people, and how happy I am to be a part of it all. It’s good.