It seems as though some of my pictures weren’t cooperating for people in the last post, so in an effort to fix it I’m splitting the post into two parts to see if that makes a difference.

Anyway, down to the progress on the house! Jeff added the eaves and the fascia board, and then started on roof sheathing! 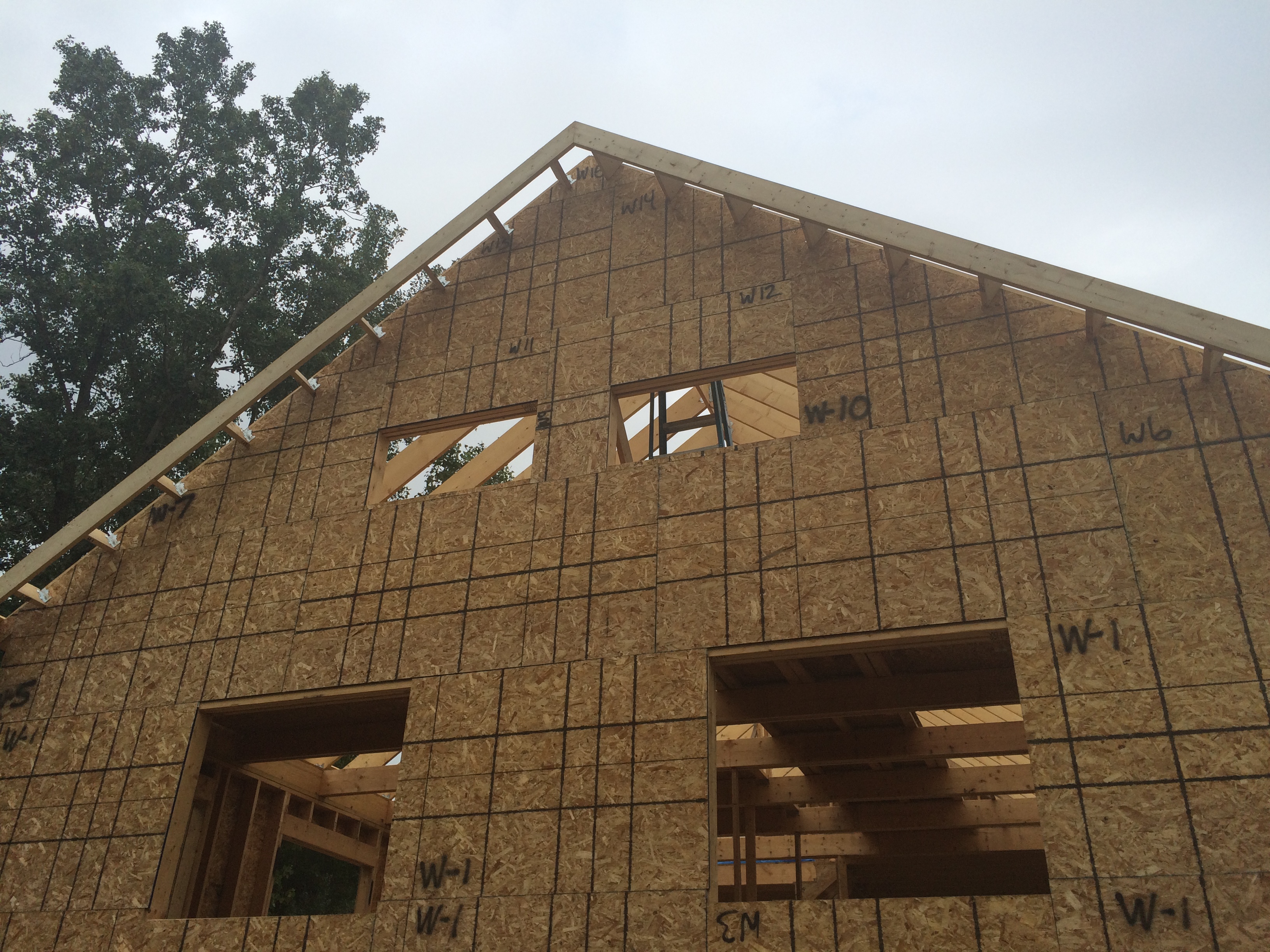 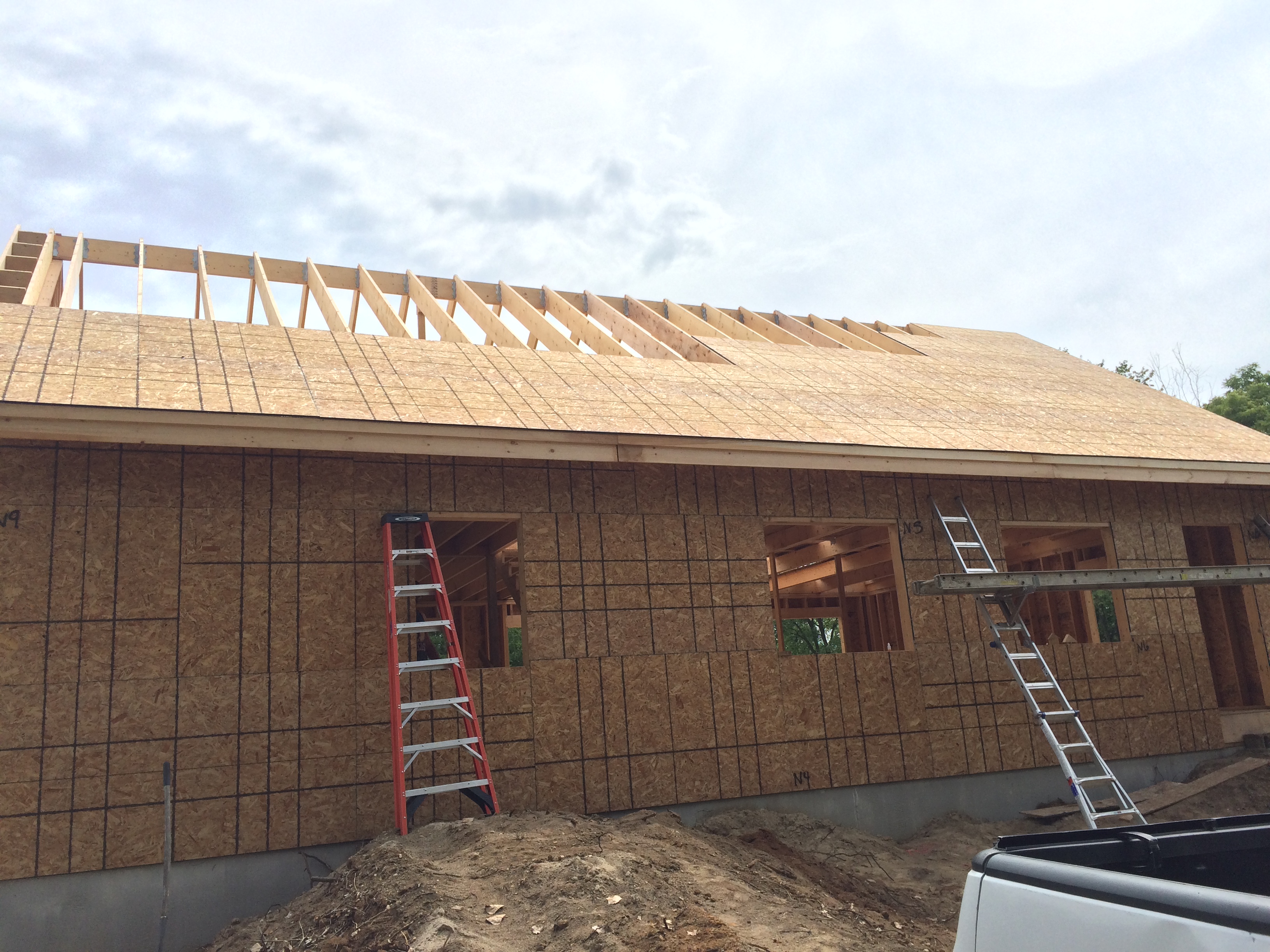 While Jeff worked on the roof sheathing, I worked on sealing the small gap between our slab and the exterior bricks lining the south side of the house. I’m liking getting some of these odd jobs now. Pretty soon I’ll be finishing the concrete floor in the basement, collecting stuff for the bathrooms and kitchen and preparing them for installation, etc. It’s good to be more involved now. 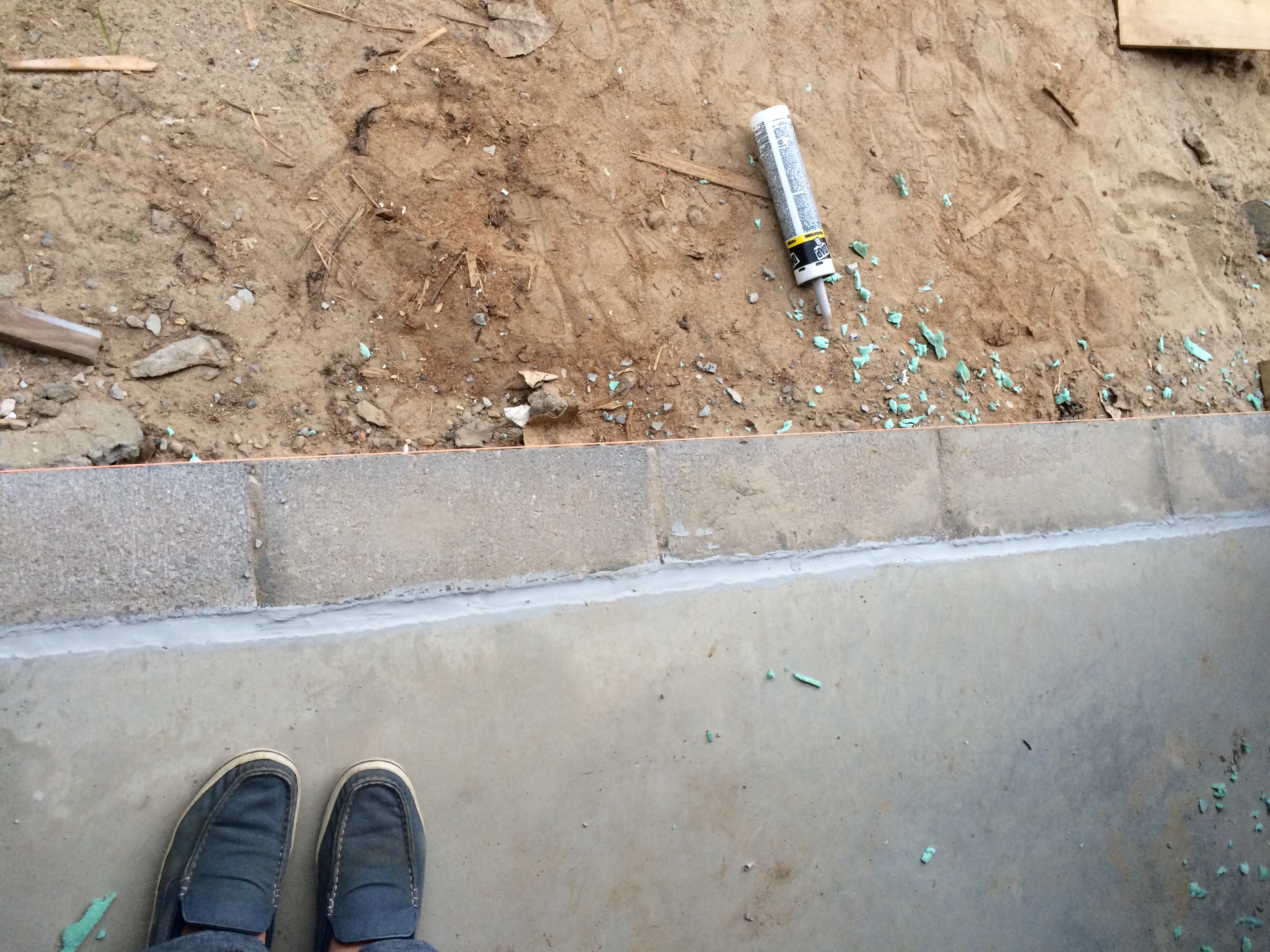 Some interior walls started going up. This is one of the walls (the one that contains the plumbing) belonging to the downstairs bathroom. 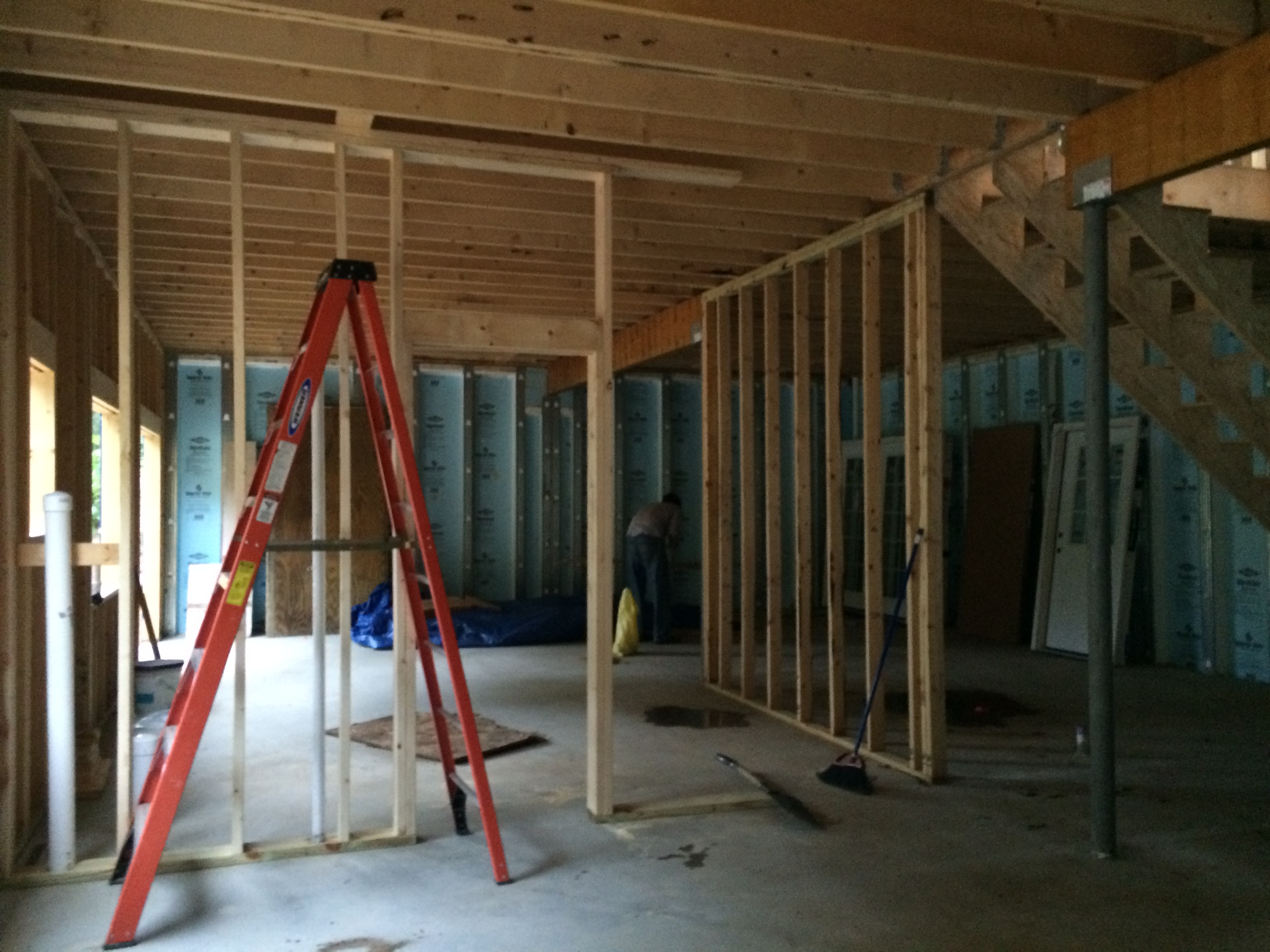 All our windows and doors came! They are so big and beautiful. I’m so excited about how much natural light we’ll have in this place. 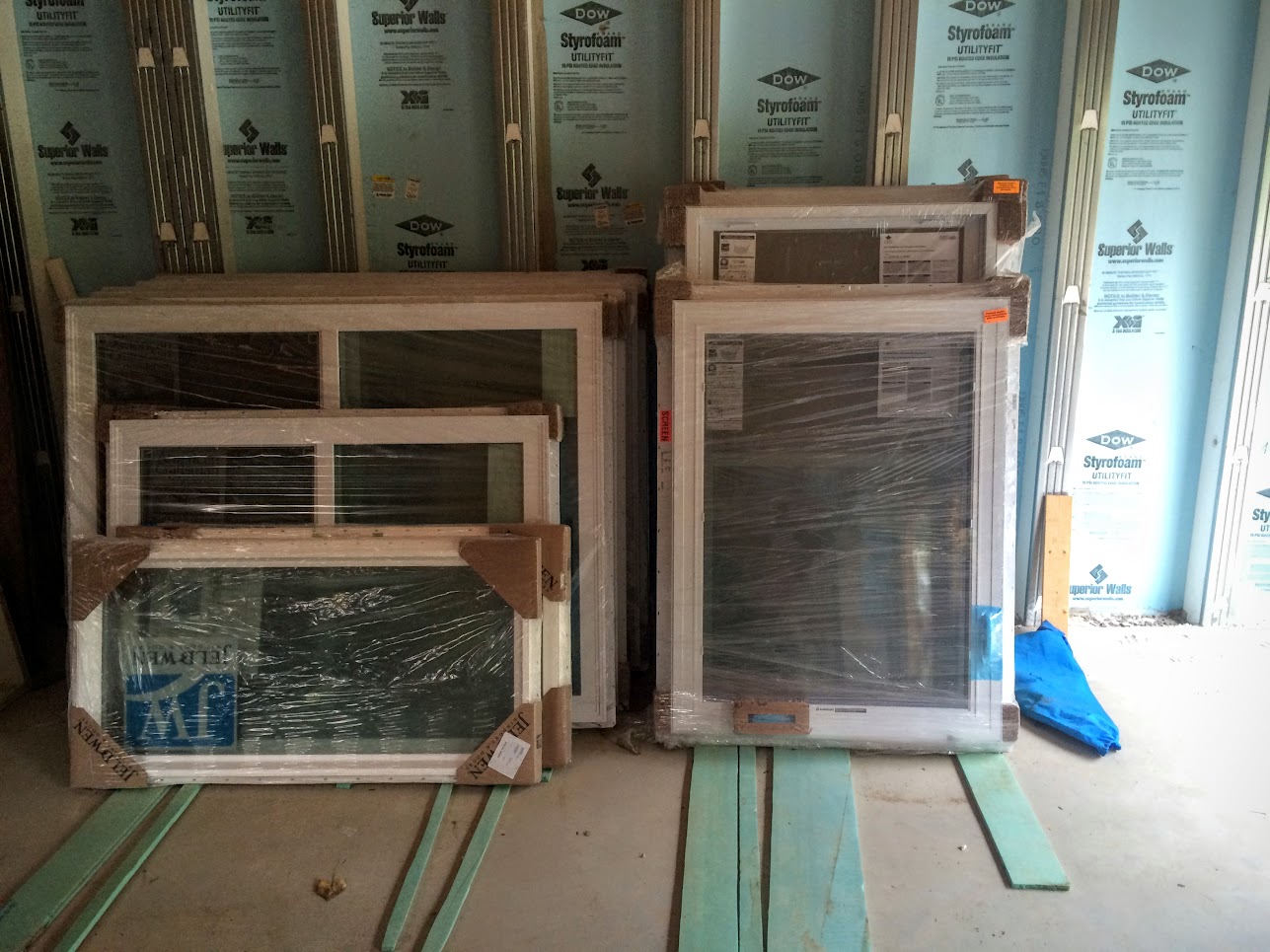 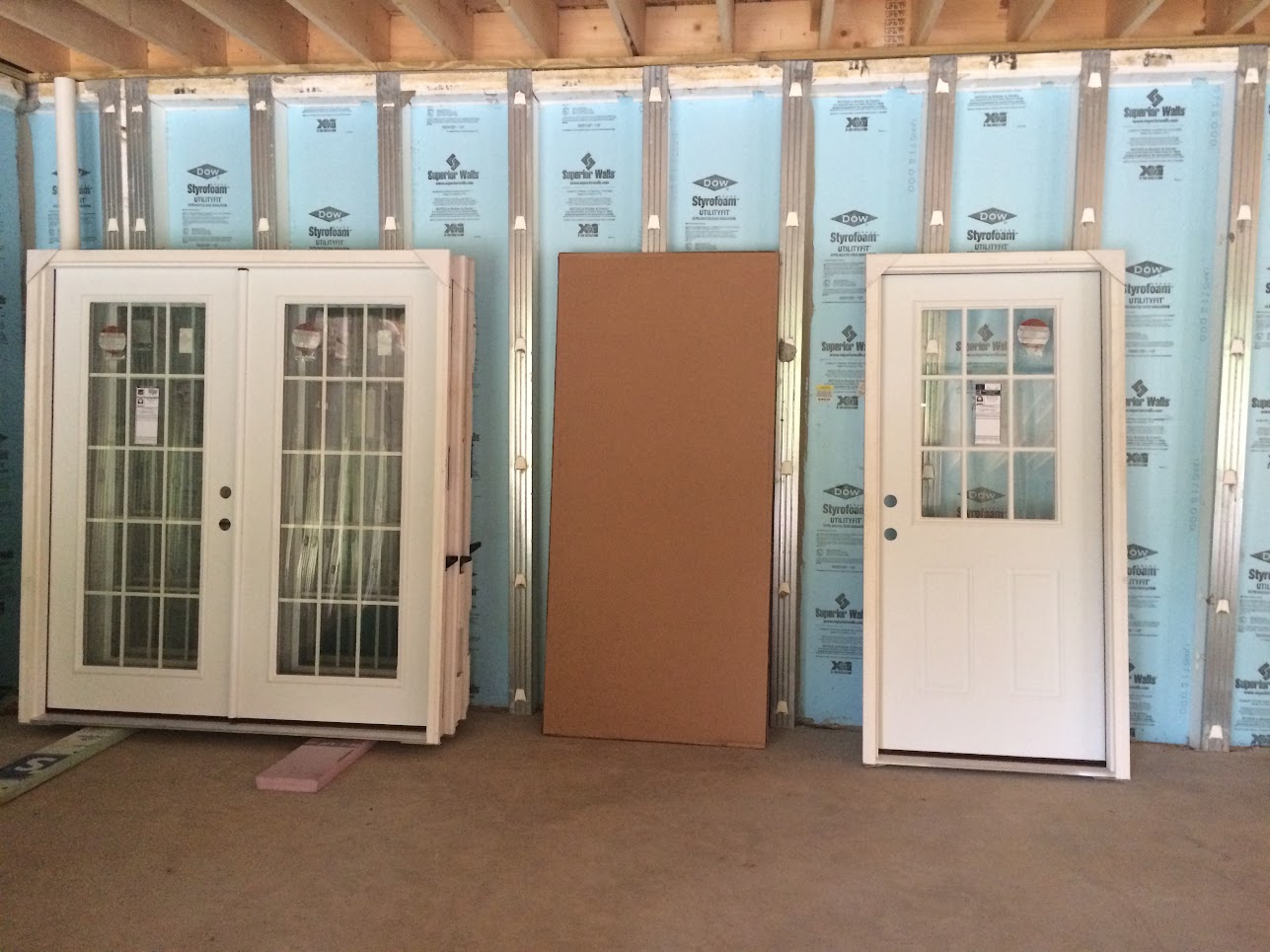 Below is another interior plumbing wall, the one that separates the kitchen from the bathroom on the main floor. 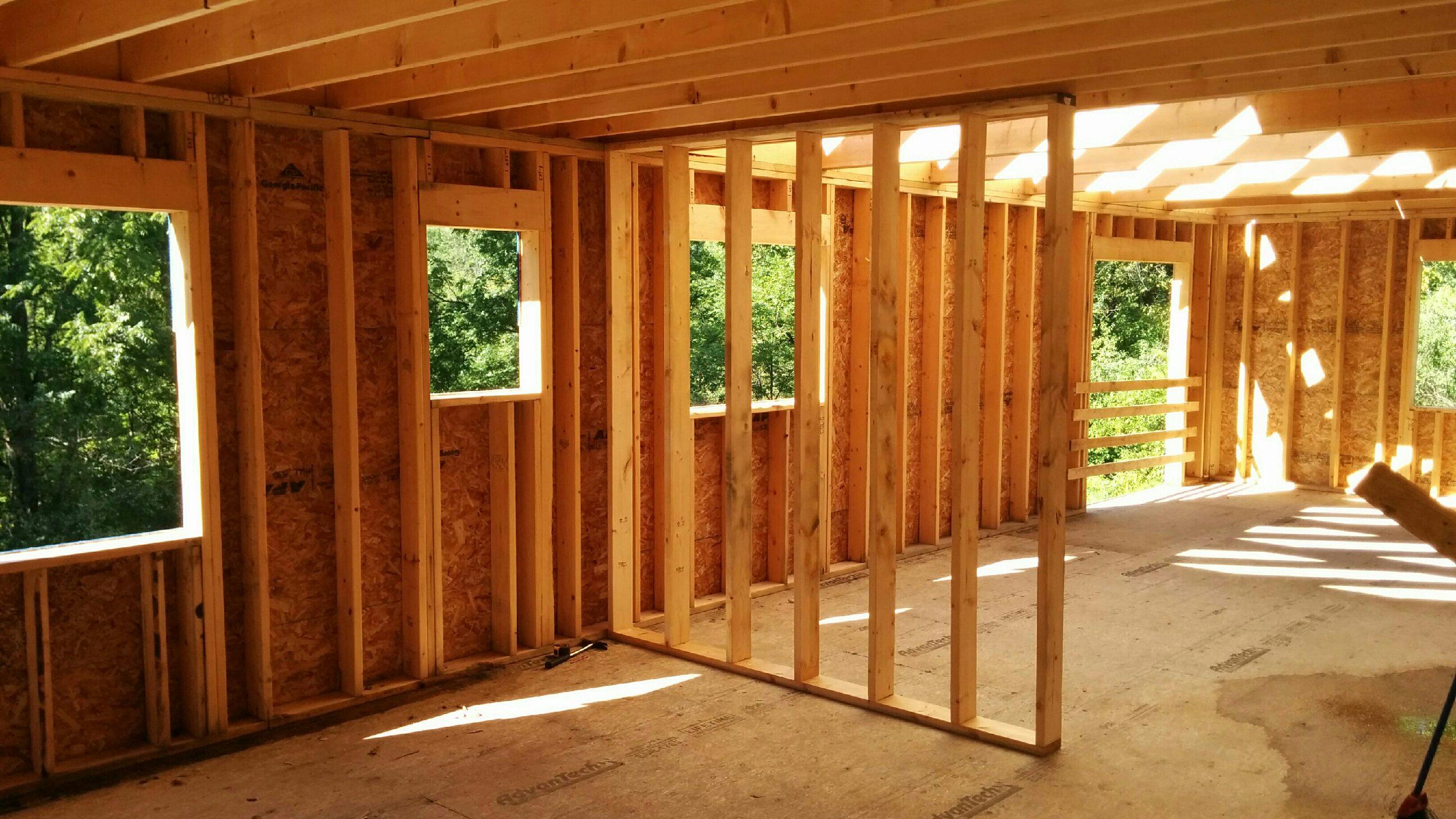 Here’s the view from the other side. That wall will have our sink and dishwasher, and the cabinets and countertops will go around the corner, with the fridge and pantry on the southern wall to the right of the big window. I also have plans for a kitchen island. 🙂 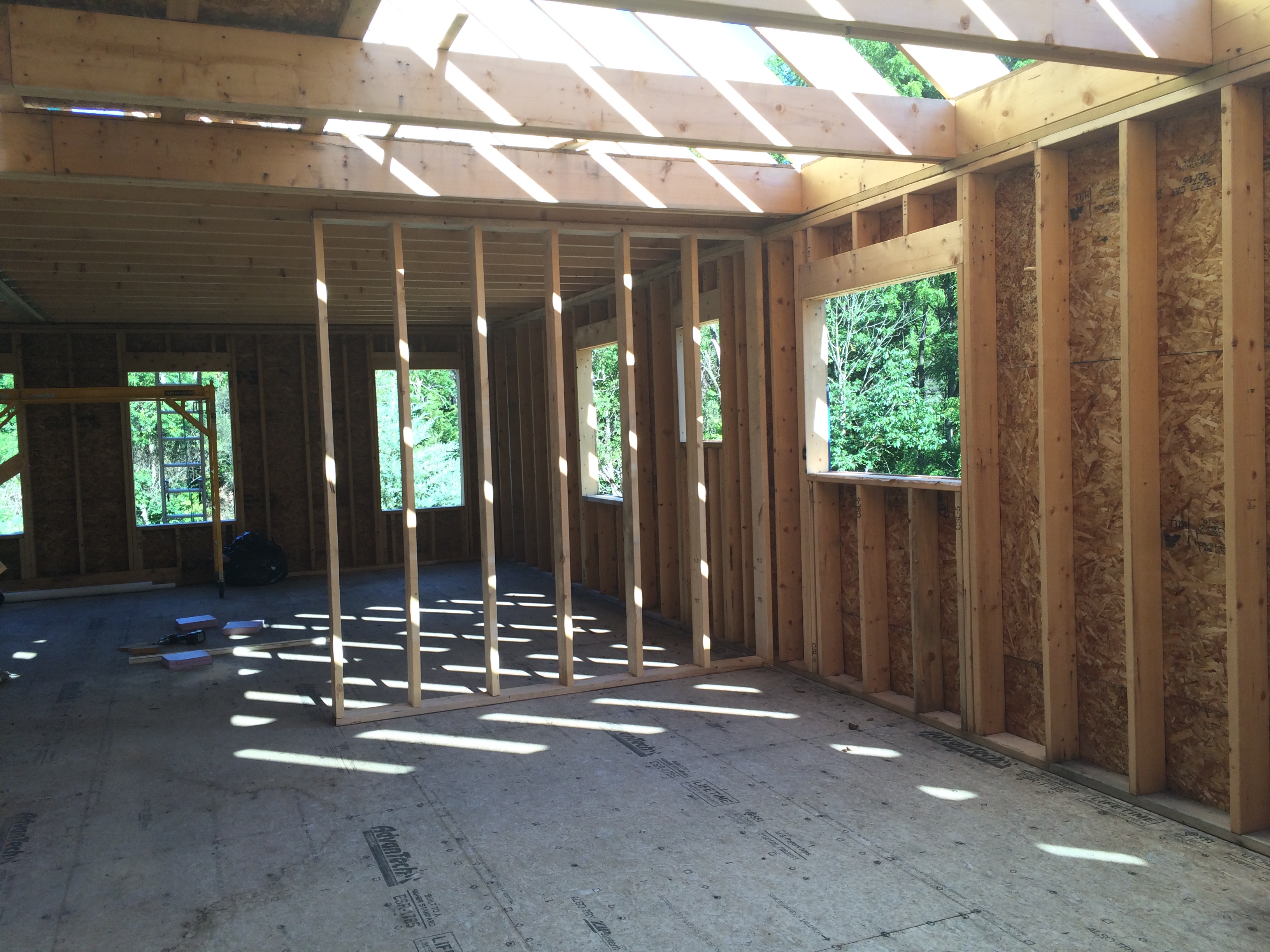 North roof sheathing in progress (view from the inside).

The kids are catching on to the value of taking the opportunity to connect when we can. Vera and I had a nice early morning porch sit! Me, with my coffee, and her, with her tea. It was great. 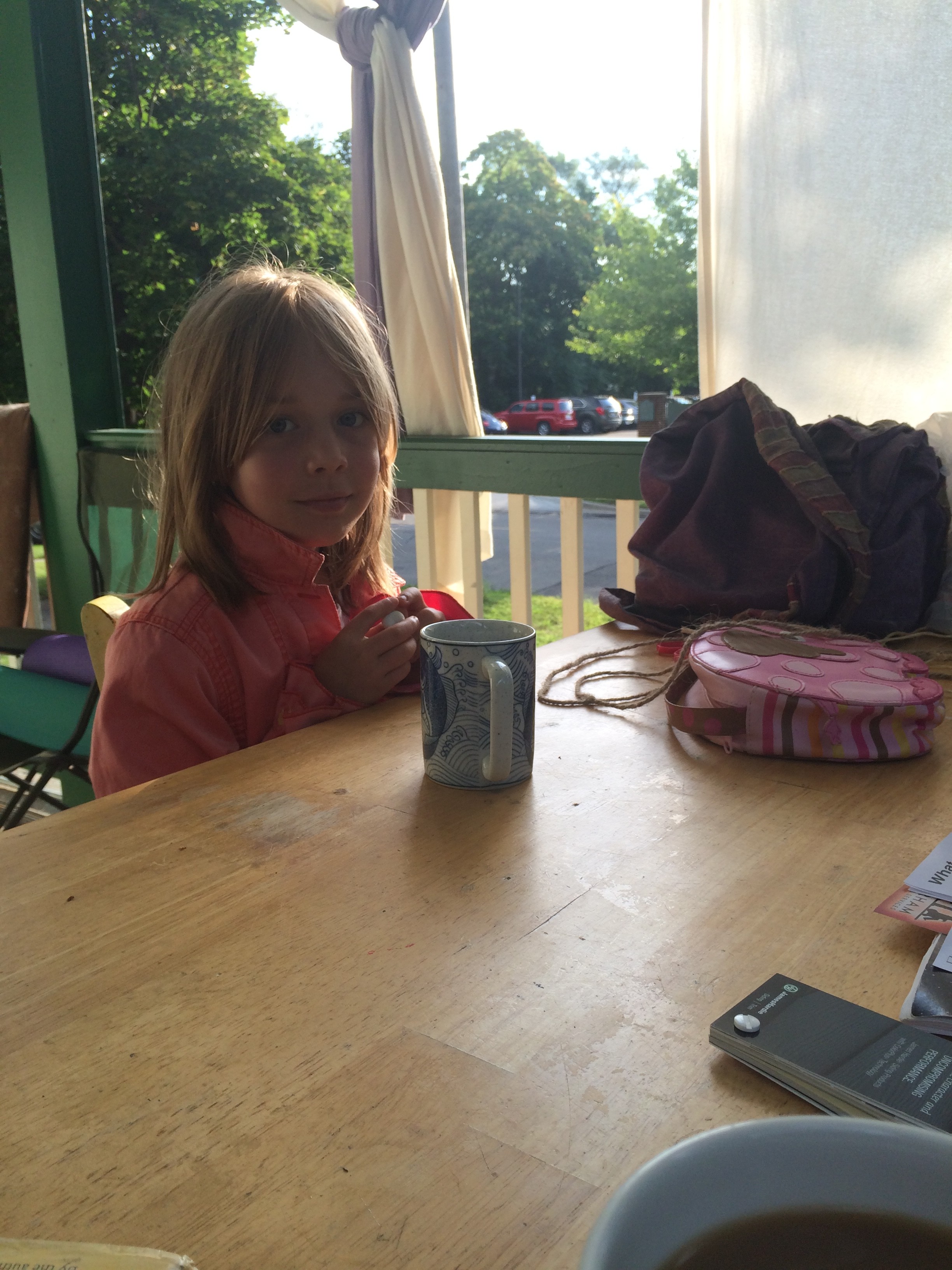 It’s been cool to see how the space changes in feeling every time some new layer gets added. It immediately felt cozier with the roof partially covered.

I worked on painting all the fascia board before we put it up. We are trying to be thorough and thoughtful about what we put off. We don’t have a lot of time to finish this, so we’ll postpone what we can, but certain things probably won’t get done for a while after we move in. We figured if we at least primed these pieces then we could later paint them the color we want, but this would go a long way in protecting the wood for the next year or so. 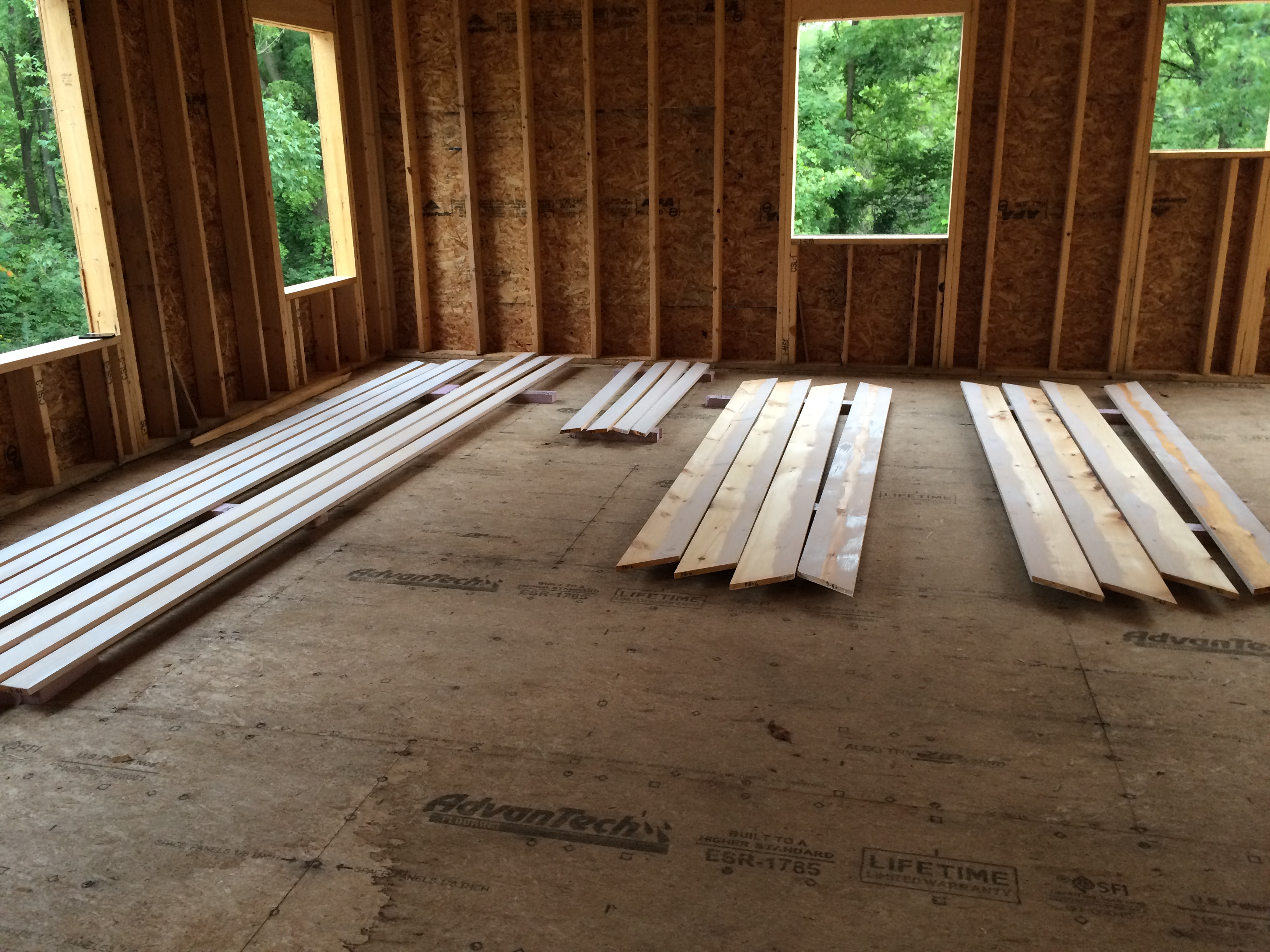 Jeff wasn’t initially going to do the sheathing on the southern side of the roof, but after he did the north side he felt really confident and just went for it. I was concerned because apparently I am a worry-wart when it comes to my precious family hanging out three stories above ground with nothing to break the fall, but anyway… I *do* trust him, and so I mostly held my tongue.

He busted it out! It actually saved us quite a bit of money too, because we are hiring roofers to do the actual shingling, but we were going to have them do the south side sheathing also. Anyway, again, the cozy effect happened. It was this day that both Vera and Asa ran around the house saying delicious things like “Oh yes, we are going to live here and it’s gonna be so cool.” and “This feels more like our home!!” It made my heart sing a little.

Jeff left just a little corner of the roof open so that we can get up there easier and move the shingles up efficiently, etc.

The kids just hung out all evening enjoying themselves. They’re so great.

On this night Jeff and I installed this skylight in our loft (which will be our bedroom). We debated whether or not to do it, since they are expensive, but we decided that we just wanted it. It’s our bedroom! In the house we are building ourselves! We want to wake up and look out this skylight! Anyway, it’s always fun to work together. I had a kind of overwhelming day that day, and getting out there really grounds me. I feel tired a lot, but it’s hard to be grumpy when you’re surrounded by trees and blue sky and you see this guy in front of you who works so tirelessly for your family. <3

We totally got this house up and spared that little cedar I love so much. This is the view from my bedroom window. The sandy area next to it is going to be where the first phase of the gardens will go. I’ll be working on that as soon as the siding is up and the rest of the earth is moved into place.

Maya loves coming out with us. Sweet old girl. I’m so glad she’ll be out here for her final years. She’s always been a woods loving dog, and now she gets to live there!

At the end of this day I found myself just plopping, by myself, upstairs in the loft space. I just couldn’t believe what we’d done/what we’re doing. I feel so lucky/overwhelmed/all-the-things about it, sometimes it just floors me… literally.

Here’s Jeff in his harness, being safe while working on the roof!

I know that these kinds of situations can be tough on couples, and it’s surely stressful for us, but oh my… I am loving this guy lately. More and more all the time. We are coming up on our 10 year wedding anniversary in a couple of weeks. I had imagined we’d have planned to take that honeymoon we missed back then, but honestly, this is better. We won’t ever regret celebrating a decade of kept promises and a lot of love right here together.

A project I’ve been working on for the past little while is clearing a site path on the exact southern border of our property. We have to do it for some kind of screwy reasons related to a certain monopolizing electric company and their requirements for putting us on the grid. It’s either a) I clear about 700 ft of thick brush so they can see down a straight line, or b) we pay a lot of money for a new survey that we don’t really need because we already have one from a year ago when we split the parcels. It’s complicated, but anyway, I’m doing it.

Above is a picture of the brush I’m working in. Below is a picture of cleared property line behind me, about 250 ft or so. It’s actually hard to tell in the photo, but you can see one of the old survey stakes with an orange flag through this small clearing I’ve made right down the center of the picture.

Zooming in on my crappy phone picture… there! Orange flag indicating the southern border, hundreds of feet away. It’s good solid work, the kind I feel pretty gratified by, despite the annoying circumstances with a company that seems to have forgotten that we are their future customers. Ahem. I guess you get to take that for granted when people are cornered into plugging in (otherwise the township won’t even legally let us live there) and only using one company (because no others exist)… Anyway, you can probably tell that Jeff and I have not been happy with this situation, but it is what it is. Funny thing- using loppers for a couple of hours straight makes the muscles in your hands feel weird and tired. I thought for a second about how shamefully weak they are and how I should probably go about strengthening them, until I realized that the only reason I’d want these particular muscles to be stronger is so that I could do more loppering, which doesn’t exactly strike me as the best motivation to seek out strange hand exercises. I’ll just have sore hands and wrists for a while. 😉 Anyway, I’ve done about 250 feet from the stake on the west side (pictured below), and probably another 250 from the east corner. 200 more to go this weekend.

This past Wednesday we worked out there and rearranged a few interior walls. It’s interesting having designed a house but not actually having any architectural experience… Thankfully we kept our design very simple, and so when we outlined the plan and saw that it didn’t quite translate the way we wanted, the changes we made were minimal and made the difference we wanted. We moved a closet in favor of more bathroom space and decided to forgo about three feet of hallway space in favor of more simplicity and less framing. No big deal, and I’m glad we have this kind of creative license. Cuz this is our house!

Below is a view of the front of the house with the skylight installed. We are getting the roof up early next week, and the siding has been ordered. I thought about revealing the exterior colors we chose, but I think I’ll leave that as a surprise for later.

Phew! That’s all I can muster for now. I have a bunch of farm/kid/food photos to share, to come a little later.