So I was planning on doing one sourdough thing a day last week, but things rarely go as planned around here… What I did do was fun! Also, today I’ll be making sourdough crackers again (delicious things!) but that won’t make it into this post.

I worked on really revitalizing my sourdough starter, but I don’t think it got that much more active than it always does. It’s never bubbling up like some people say theirs does, it just has some bubbles in it and smells healthy and yeasty. This stuff is tricky! So here’s what I did:

The sourdough pita, which was really just like flat bread/naan because it didn’t puff up well enough. 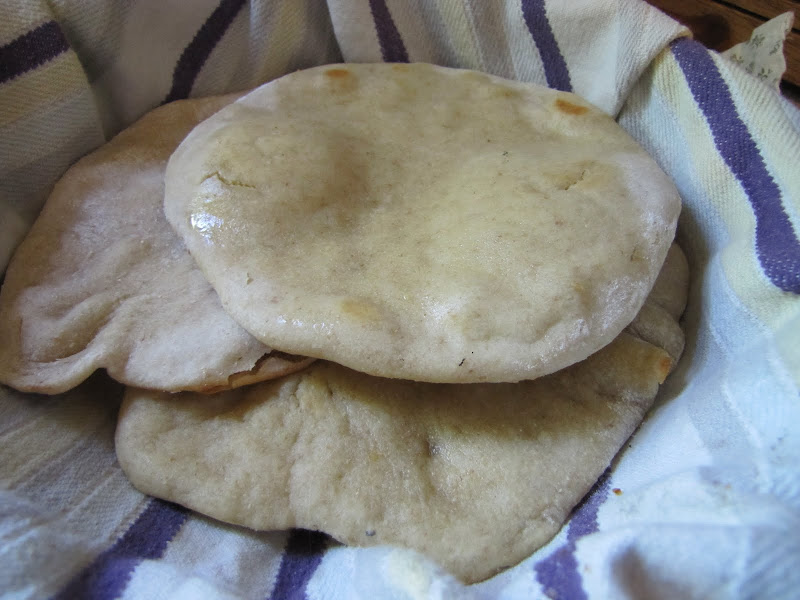 Sourdough cookies- I liked them a lot, but I’m definitely going to tweak the recipe some. I’ll be sure to post it here when I have what I want. 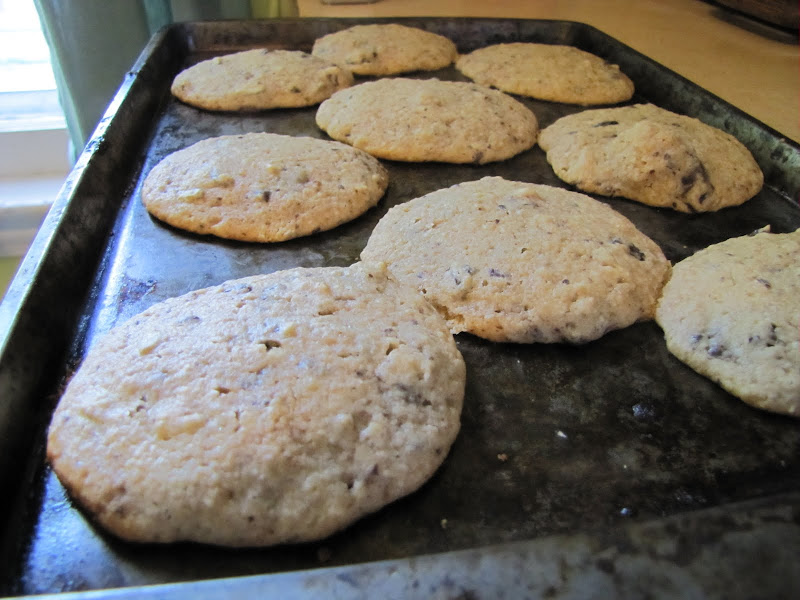 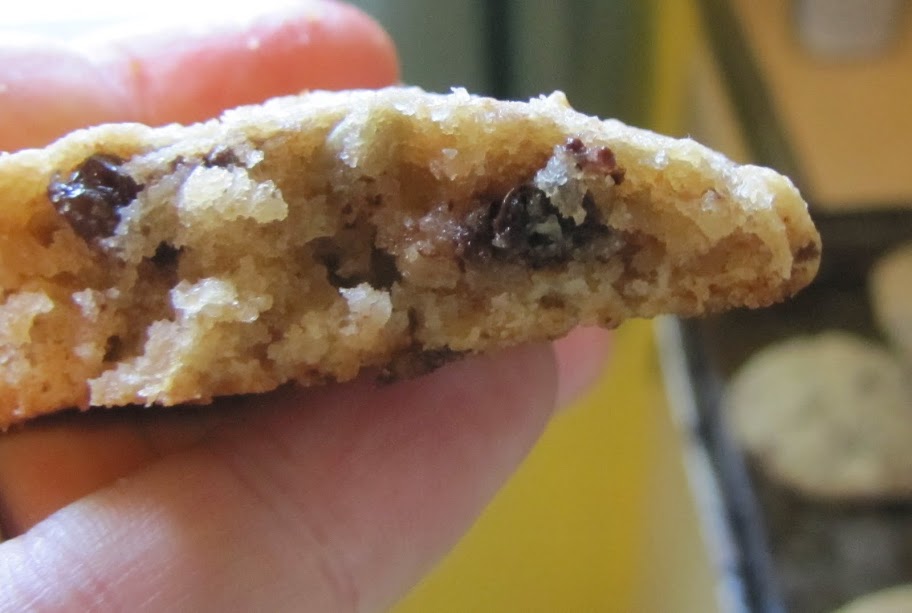 Another batch of bread. This is just so hit or miss. These were nice enough (I’ll make a really good bread pudding or something), but dense and flat like they always seem to be. I just don’t know how to get it right! I want fluffy loaves! 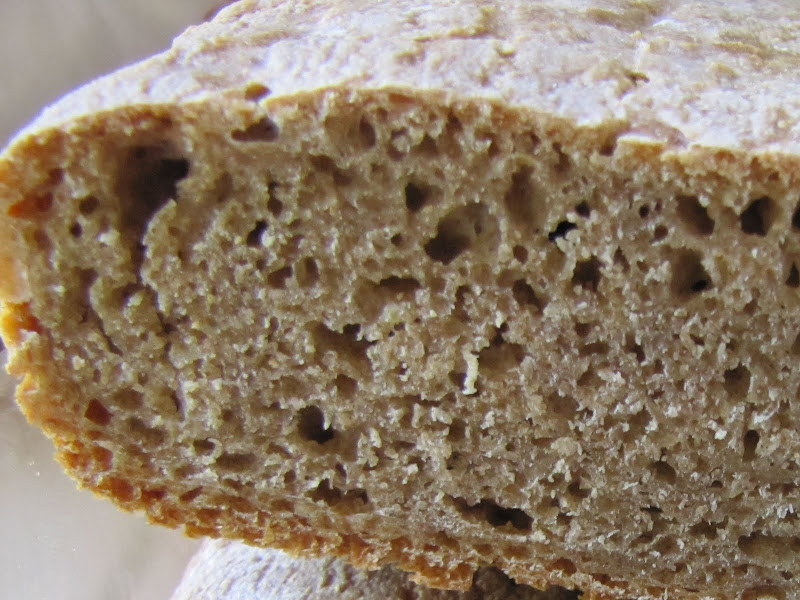 Sourdough pancakes. So good! We made a strawberry sauce and topped it all with homemade yogurt and maple syrup. Seriously yummy. 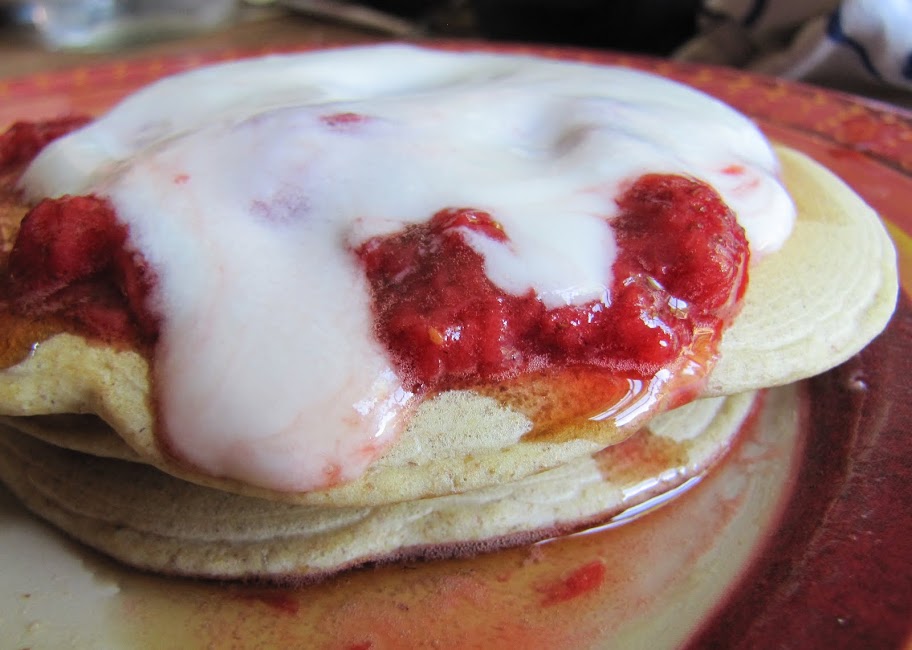 So those were my adventures in sourdough this past week. I’m learning a lot, and eating pretty well too.
—

Last night we harvested some of the first zucchini. We grilled some up last night with our dinner- and guess who loves it? Vera had two helpings of just the grilled zucchini! It’s amazing what a fresh vegetable out of the garden can be like. I’ll be doing lots of stuff with zucchini over the next several weeks. It’s a prolific little bugger, and it doesn’t store very well. I’ll eat a bunch, bake with it, and probably dry some for soups in the winter, but I’m sure it will also fill up my veggie giveaway basket. 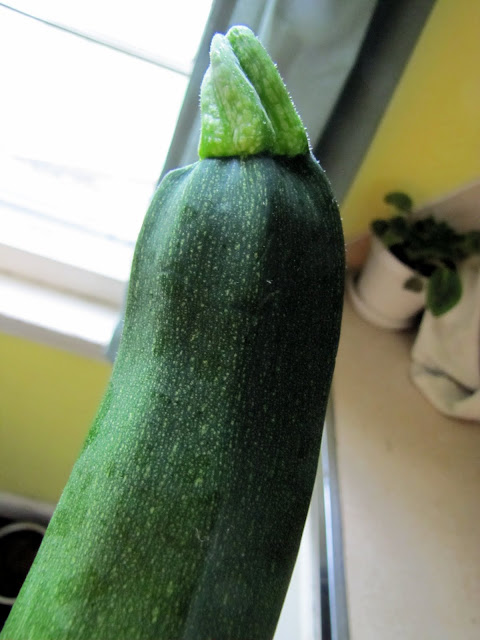 And three beautiful eggs from our hens. We’ve gotten one a day since we got the ladies, which is pretty good I think! I wasn’t expecting any until they got really used to their new home. We know that two are not laying right now, so we’re hoping it’s just because they are younger and need a little more time and love. I’m learning all about fresh eggs, too. I learned that you don’t need to refrigerate them as long as they haven’t been refrigerated before. So until we get more than we can comfortably store on the counter, or unless we aren’t using them fast enough (which is not likely to happen), I’m just keeping them in a bowl. I like looking at them anyway. 🙂 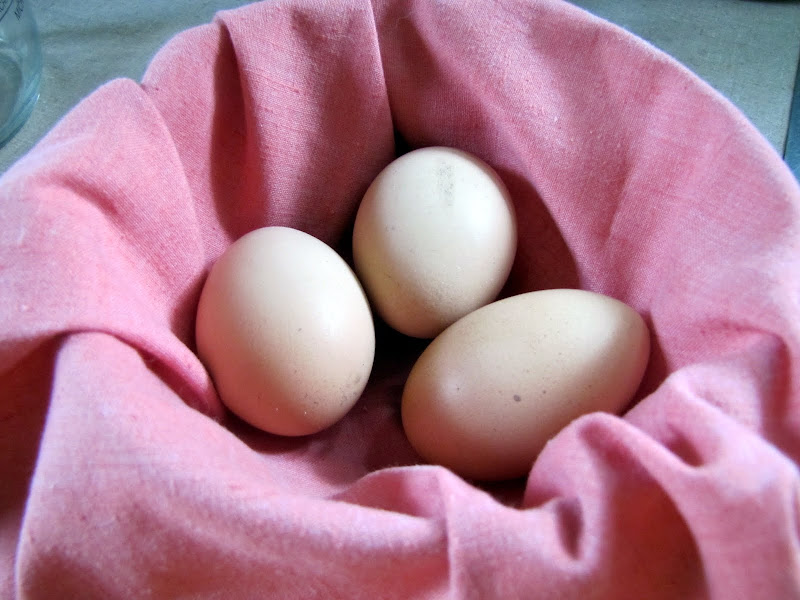 I decided to make an omelet for Vera and I for breakfast. The first taste of the eggs! 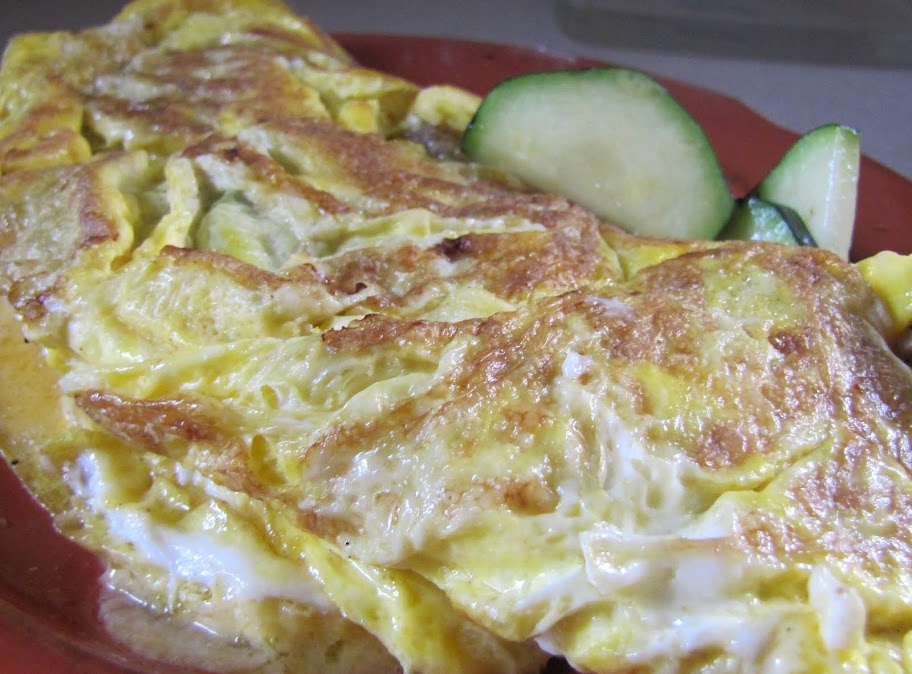 It was absolutely delicious, we both scarfed it. While I was making our breakfast I was thinking about how happy I was that I could make such a simple nourishing meal- mostly out of our own backyard. Except for the cheese. But then I started dreaming of having our own goats, and then that would change…

Then I went out to the garden to check on the ladies and see what I could harvest before it turns into a sauna out there. 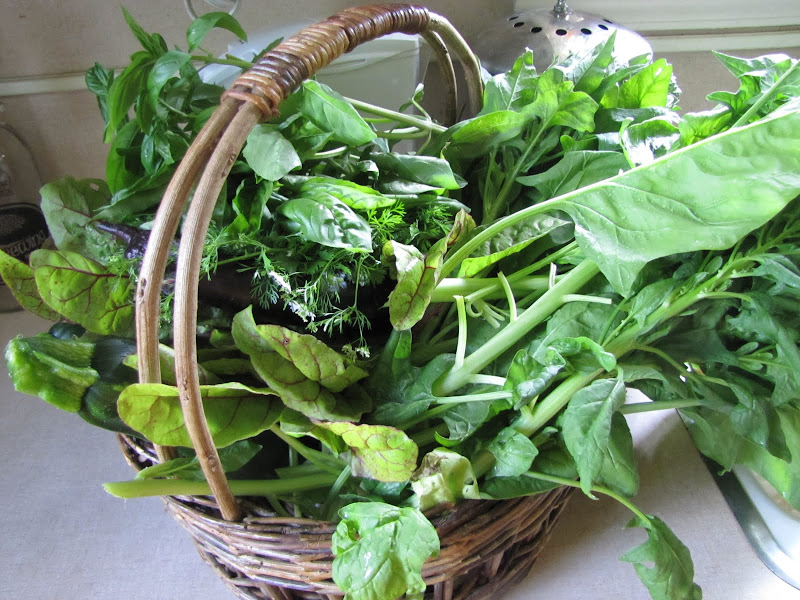 A bunch of chard and spinach- and there’s way more where that came from… I just try to harvest some every couple of days. 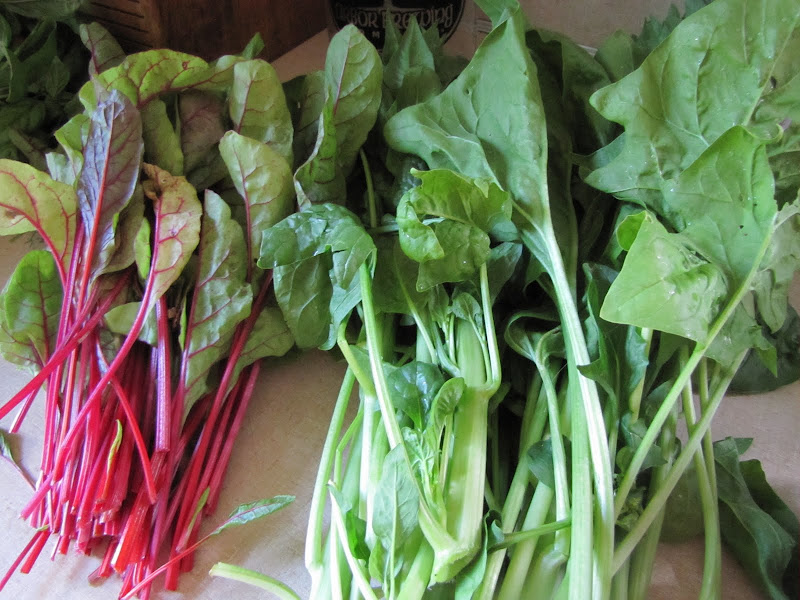 And lots of basil. I learned last year to keep my fresh herbs in a vase of water on the counter. It keeps them fresh longer, and it encourages me to use them before they go bad! When they are stored like this I throw them in all sorts of things. If they are in the bottom of my fridge then I’m much more likely to forget they are there. Plus they smell awesome, and aren’t they pretty? 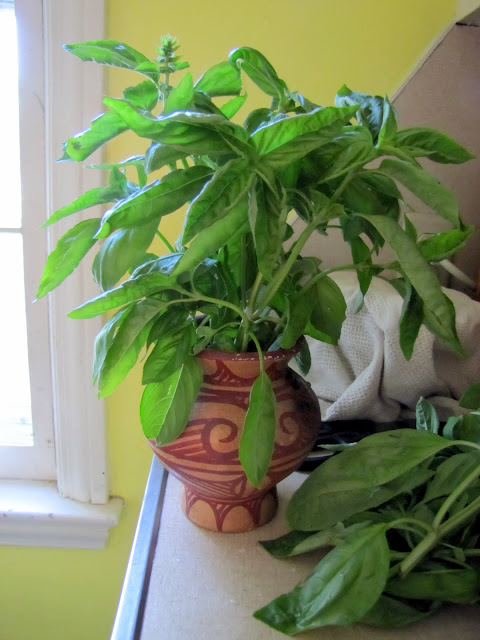 And then here’s what was left in the basket. Two zucchini, an eggplant, two little blonde cucumbers, and an egg! I am completely addicted to this. Seriously, the fact that I can still smell basil on my hands as I type this… I think I’ve found my niche. 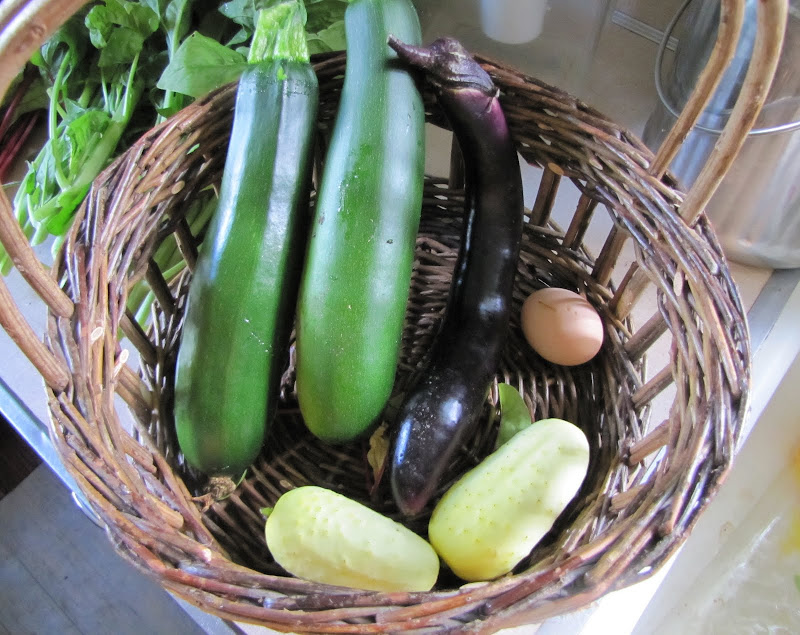 And here goes try #2 with the giveaway basket. No one took anything the last time, and so I just didn’t bother for a little while. I don’t know why, but I’m not going to give up! We’ve definitely got far too many greens to eat ourselves, and I know that whatever isn’t taken will be happily gobbled up by our chickens. So I’ll try to be better at stocking it all. Plus, it’s a great way to use our extra rubber bands and twist ties that I save in a little jar on the fridge. 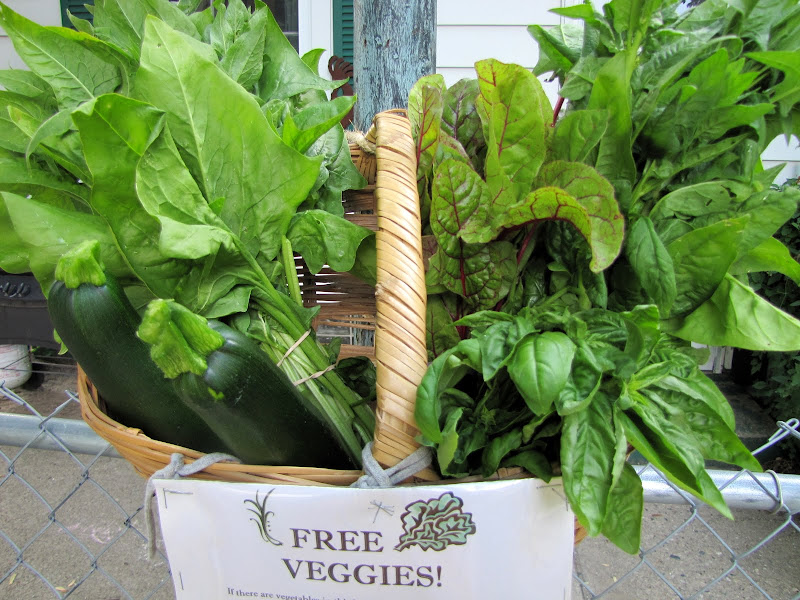 *Update on the freebie basket- Everything was gone by 1:45, when I looked out there. Yay!