As he grabbed the fluffy black bird out of its little house, I felt my heart pound a little faster. "I’m going to do this. I’m going to take this life." I thought as we walked it back to the shed.

After stroking the rooster’s wattles for a minute (apparently that can calm them down a bit), we slid his head through an empty milk carton with the bottom cut off and just a circle cut out at the top. There was just enough room to squeeze his head through and bring his neck out a bit. I looked at his eyes and thought "Thank you for your life." I then put his head under a broomstick on the floor, braced it, and pulled up on his feet quickly, breaking his neck and killing him instantly. I pulled him out from under the stick and he started flapping his wings wildly in a crazy nervous response (which I now understand is a good sign of death, actually). I held his legs tightly and soon he was totally limp, all signs of life were gone. Then we hung him up over a bucket and I slit his throat to drain the blood. Then we put him in a pot of hot water for a minute or so, hung him back up, and plucked all the feathers out. There honestly wasn’t a lot to it.

It wasn’t a glamorous job, but it was one I was glad to do, finally, after all these years eating meat. A couple of years ago I realized that I needed to know what it was like to take the life of an animal for food. It seemed important if I was going to be a meat eater- and now that I think about it, was good to do just being a human in general. Regardless of your eating practice, I’m a firm believer that we all impact the animals around us. There are just some eating practices that seem to do a better job of outsourcing the damage, but it’s there (in the water, the destruction of habitat, etc.). Anyway, it was something that all of us humans used to experience on a regular basis, and yet this way of life keeps us from it and, I think, damages us and our view of the world. It’s a strange place we live in, where we eat meat that comes from horrible torturous places, and yet squirm at the thought of taking a life ourselves. It creates this strange imbalance, where there are those that mindlessly partake in eating meat from awful sources, even though they are opposed to animal abuse and violence, and then on the other end you’ve got folks swearing off meat eating altogether, as if it was always a practice rooted in cruelty. Neither stance makes any sense to me.

I figured killing a chicken would be top of the list, in terms of animals to choose from. Most people with chickens (I hear) are more than happy to have help on the day of a slaughter. Luckily, a friend of mine offered to have Jeff and I come to his house just down the road (in the township, so he can have more chickens than we can in the city) and join him. We got a sitter and went last night. I was feeling pretty philosophical about it all, and wondered what kind of emotions I would have about it. I mean, personally, I believe we’re animals just like the rest of them. I think we’re designed to eat other animals, and that it’s the most sustainable route, if done right. Intellectually I’m behind this. I’ve thought this one out. BUT, I had no idea how I was going to feel doing this. I’ve been so sheltered from it all my life, I wondered if it would be hard or if I’d feel guilty or changed or something.

The verdict? It felt fine. I was pretty nervous beforehand, having over-thought the whole thing, but when it actually came down to doing it, it was just kind of… right feeling. Not good or bad. I suppose it may have been a little more earth-shattering if I were regularly eating factory farmed meat or something and hadn’t really thought about this stuff. But I have already spent hours of my life meditating on the fact that this is a life I’m taking each time I eat it, and that it should be respected. The actual killing was fast, and I was sure to put my thanks into it. It was kind of strange, seeing this thing full of life and then seeing it after, but it wasn’t really tragic or anything. After that, it’s just a body. It was messy and a little bit of work, but I don’t know that we should be eating food that doesn’t take a little work from us. I guess what it got me thinking about is how disconnected we are, as a culture, from death and what it means in our lives. We’ve completely lifted ourselves out of that game, fighting death with fists flying and yet taking lives by the unnecessary bucketfuls for our perceived gain… and for when we do meet death, we’ve got to imagine some amazing glowy place like heaven to make it right in our minds. What if death is just okay? What if we all just feed each other constantly- a fluid wave of energy through everything, pouring into this and that and never ending. Obviously, I think the way this culture does it is insanely destructive, and we will soon pay the price. I’m not arguing relativism. There’s a right way to do this and a wrong way, I think. But ultimately, we all just grow and bloom and die and feed each other. We see it all around us. 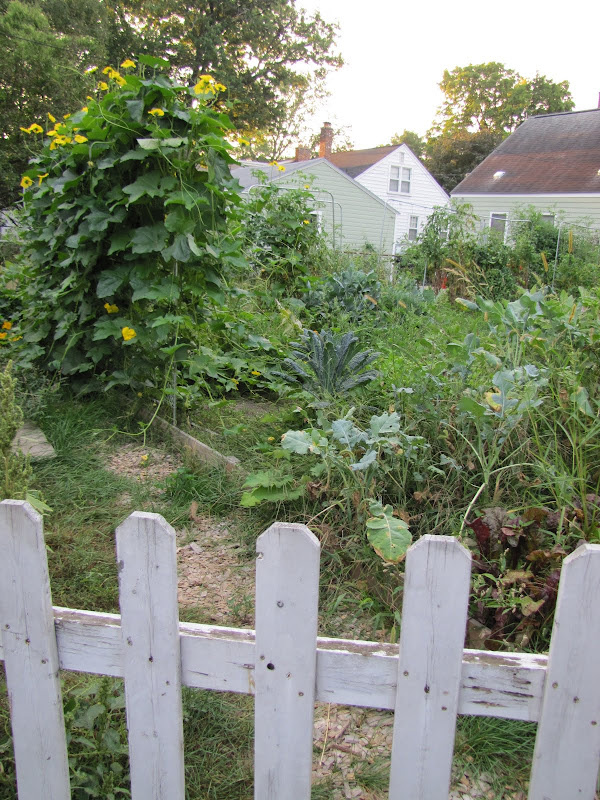 Anyway, I feel like it was a rite of passage. Jeff and I left there feeling strangely normal. Also, rather than feeling like we could just put a check in that box, we both agree that we should strive to be that much closer to what sustains us- which likely means that we’ll find a way to raise our own meat birds and do our own slaughter each year. Next fall when I can leave the kids for longer, I’ll go hunting for deer. We’ll see where this goes. Vera and Asa will be intimately acquainted with this stuff, which I feel good about. Vera asked us where we were going that night, and so we told her. "We’re going to kill chickens, honey… is that okay?" To which she replied "Yeah." So we said again "You know, like the chickens outside. That’s what we’re eating when we eat chicken. So we’re going to go kill some chickens to eat. That’s okay with you?" And again she said "Yeah, it’s okay." No big deal to my 2.5 year old…

When I talked to my sister about the experience she said it gave whole new meaning to the phrase "living from hand to mouth". Rather than implying poverty and struggle, it’s about responsibility and self-sufficiency. I liked that.

—
This week we also took our Mrs. Peacock (Jeff’s favorite) to the vet to learn about how to treat bumblefoot. Then we got another 2 hens to add to our flock- the neighbors don’t seem to mind the chickens at all and we wanted a couple more. We discussed whether or not it was strange to have both nurtured our own chickens and killed other ones, but we realized that our relationships with things are varied and complex, and that’s okay. So, meet Little Yellow and Odette. 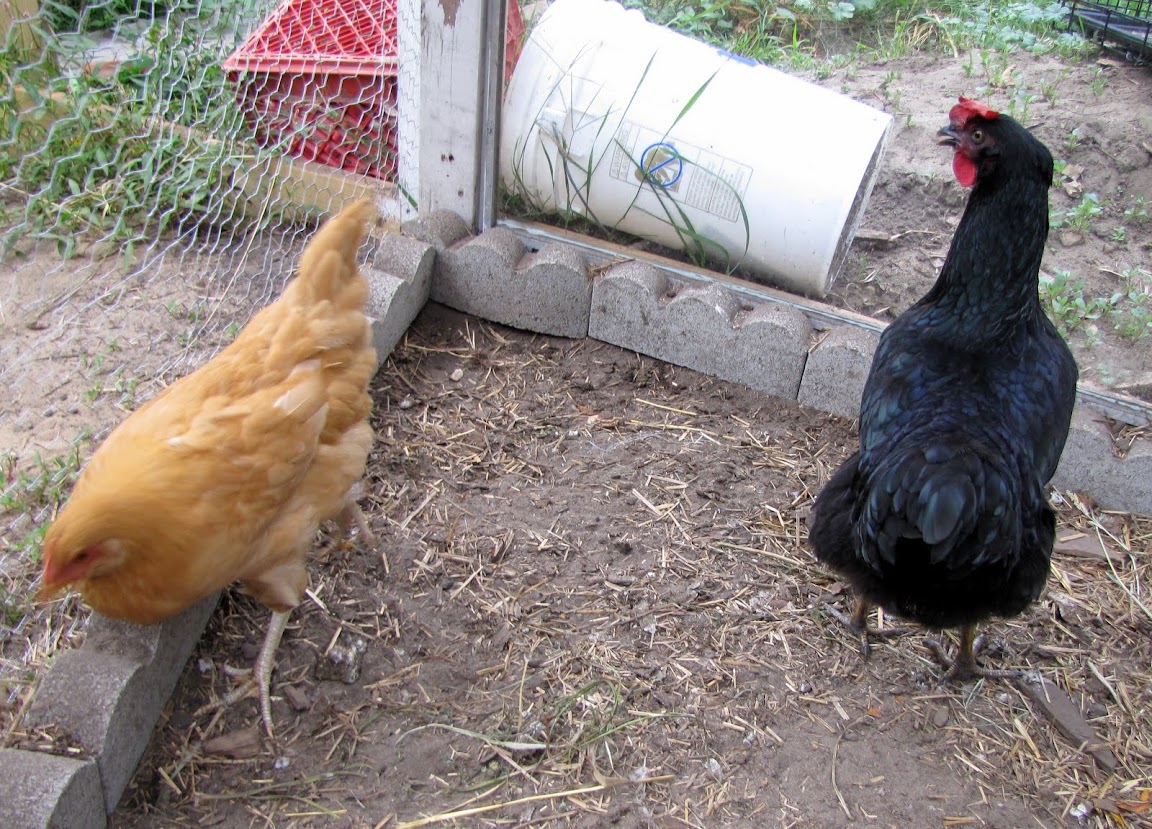 Little Yellow is still young (not yet laying for probably a month or two) and is fast and a little nervous. So I didn’t get a great picture of her, but Odette is just lovely, isn’t she? I have a feeling we’ll be good friends. 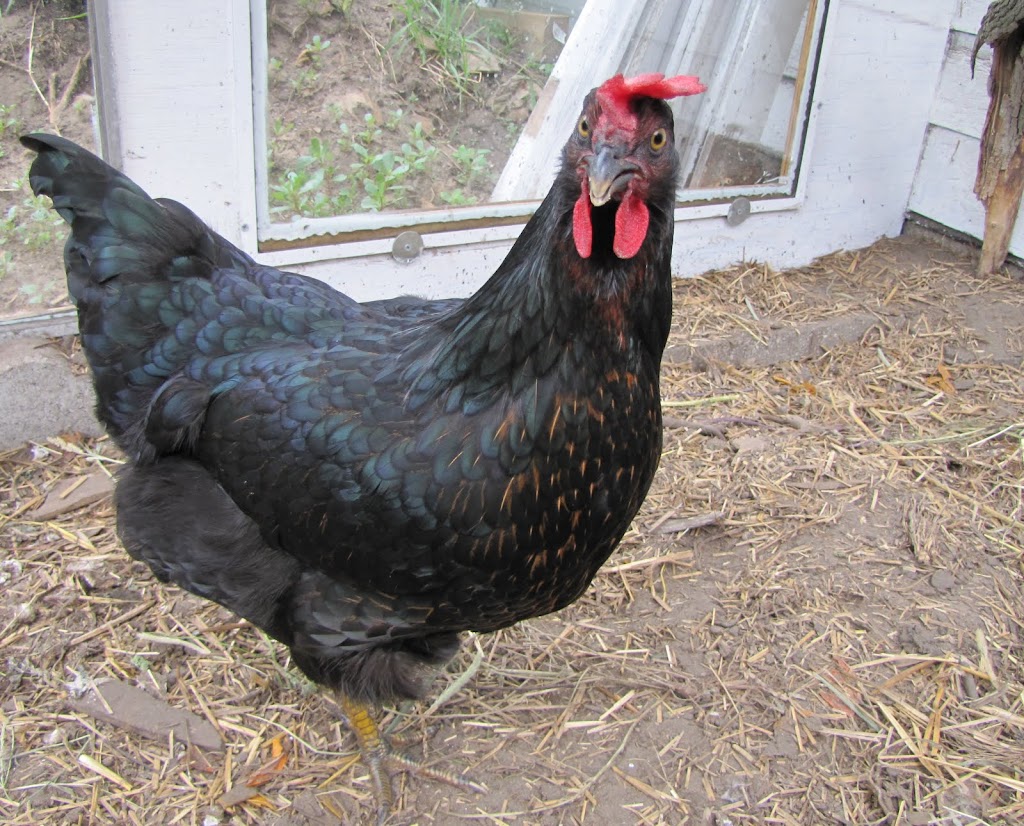 And our other ladies. Busy as usual. 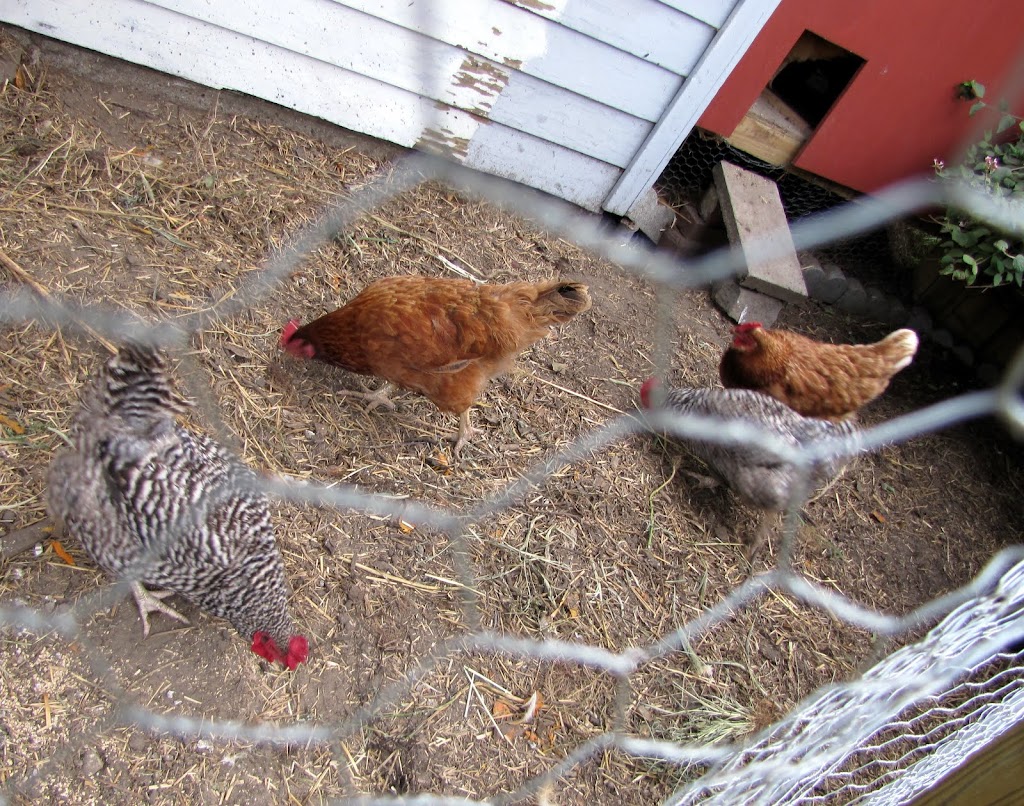 "If you would indeed behold the spirit of death, open your heart wide unto the body of life. For life and death are one, even as the river and the sea are one." (Kahlil Gibran)