This week has been organized in some ways and disorganized in others. I’m chipping away at the kitchen project, and it’s nice to be finding homes for things that were just getting kind of stuffed away. First, the hutch. I was happy with the hutch, it just holds fragile glasses and my cookbooks, and then teapots and candles and vases, and in the bottom it holds napkins and placemats and hotpads, etc. Anyway, I realized that if I could move all the tea I’ve got out into it, then I’d free up a lot more cupboard space. So, I decided to move the cookbooks and replace them with the tea stuff. 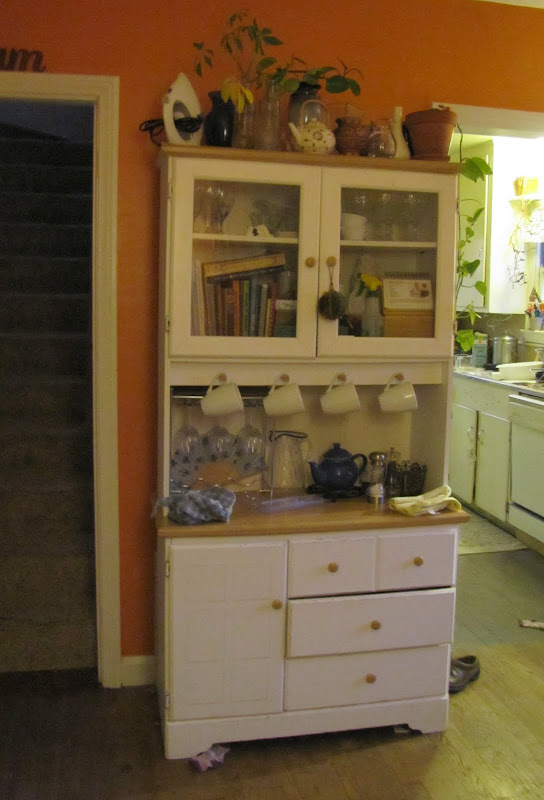 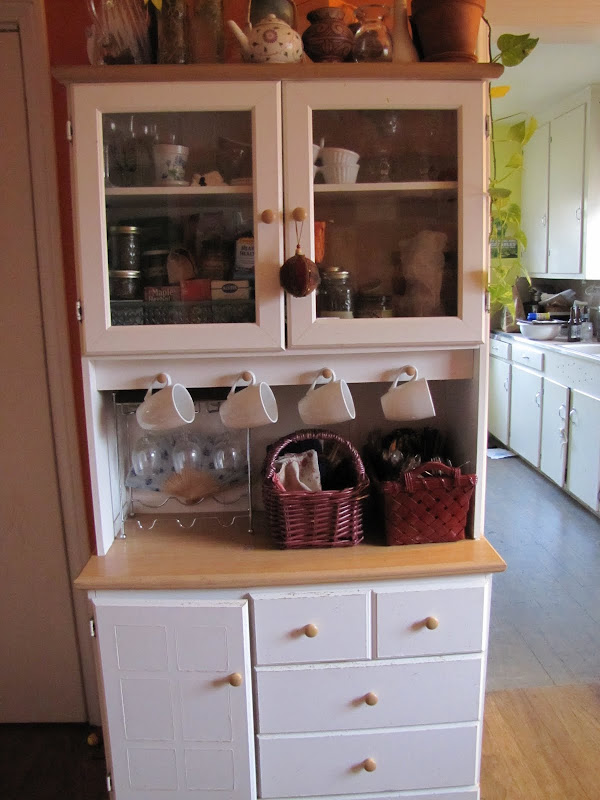 Now all the tea stuff is together! I also got inspired by this, and decided to put all of our napkins and silverware in baskets on the hutch. A whole big drawer is now clear! I sorted it all into little wide mouth pint jars, and I think it’s great. I still open the big drawer in the kitchen every time I’m going for a fork, but I’ll retrain myself soon enough. Also, this may be a no-no for some people, but I incorporated all of the actual silver that my grandmother gifted me when they moved out of their house. Now, it has a nice case and is really beautiful, but we weren’t using it ever. I mean, I rarely have gatherings that are that big, not to mention that we are just sort of perpetually casual around here. But it’s good stuff, and I hate the idea of not using it- plus I’ve read that silver can be good for you, something about antibacterial properties, etc. Now I’ve put it here to be used, and I like it. Jeff doesn’t like that we have to hand wash it (silly boy, I do most of the dishes anyway!), but I insisted because it means that we get to use this beautiful heirloom rather than keeping it locked away in a box for use every other year. 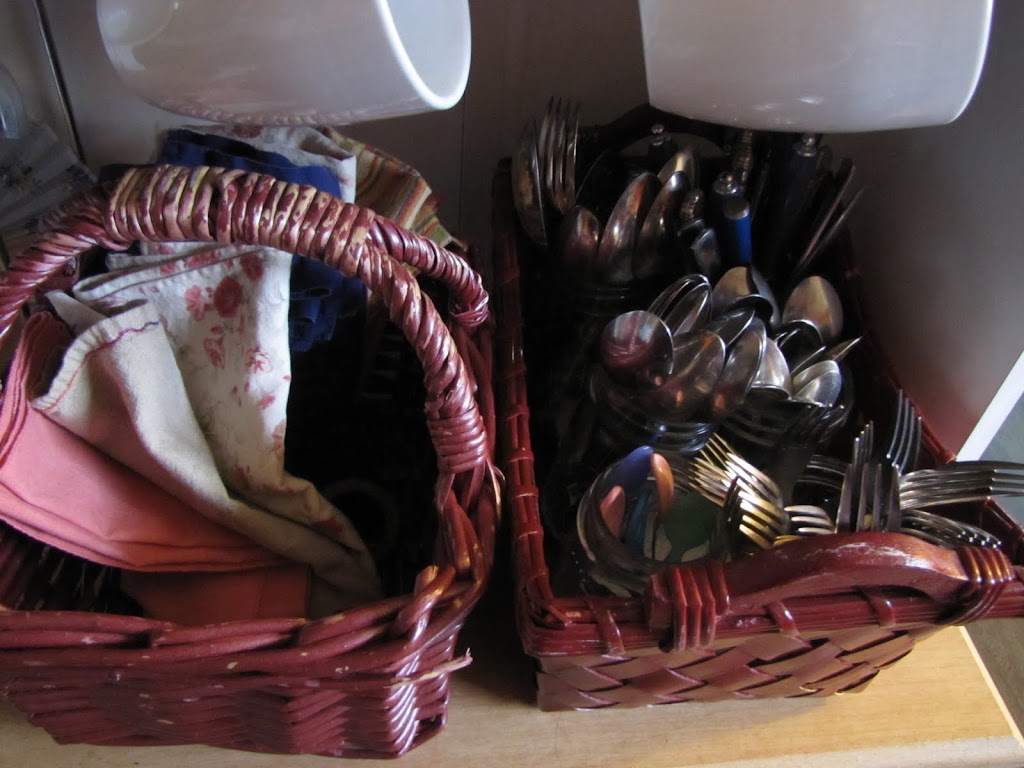 Where, you ask, did the cookbooks go? On top of the fridge seemed like a good place to me, as all it’s used for right now is a few sprouting potatoes and some miscellaneous bottles of things that slide around and make sticky spots. 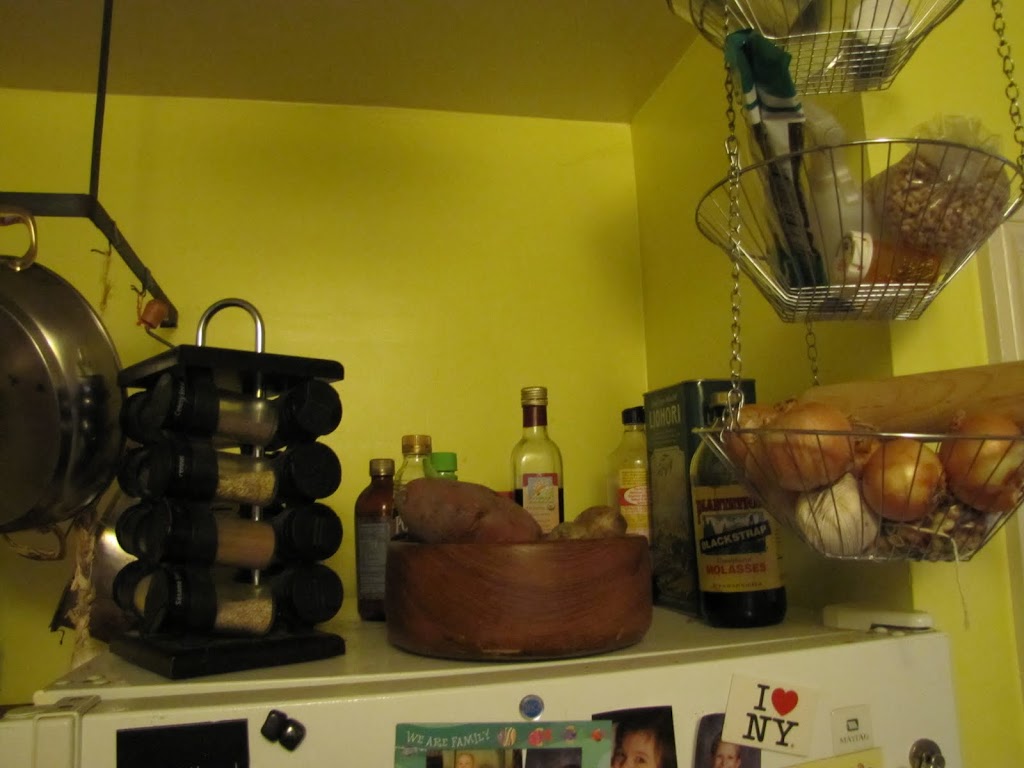 Those sticky bottles were wiped down and put in a basket in the back there, potatoes in their rightful spot in the hanging baskets, and cookbooks neatly stacked right in front. 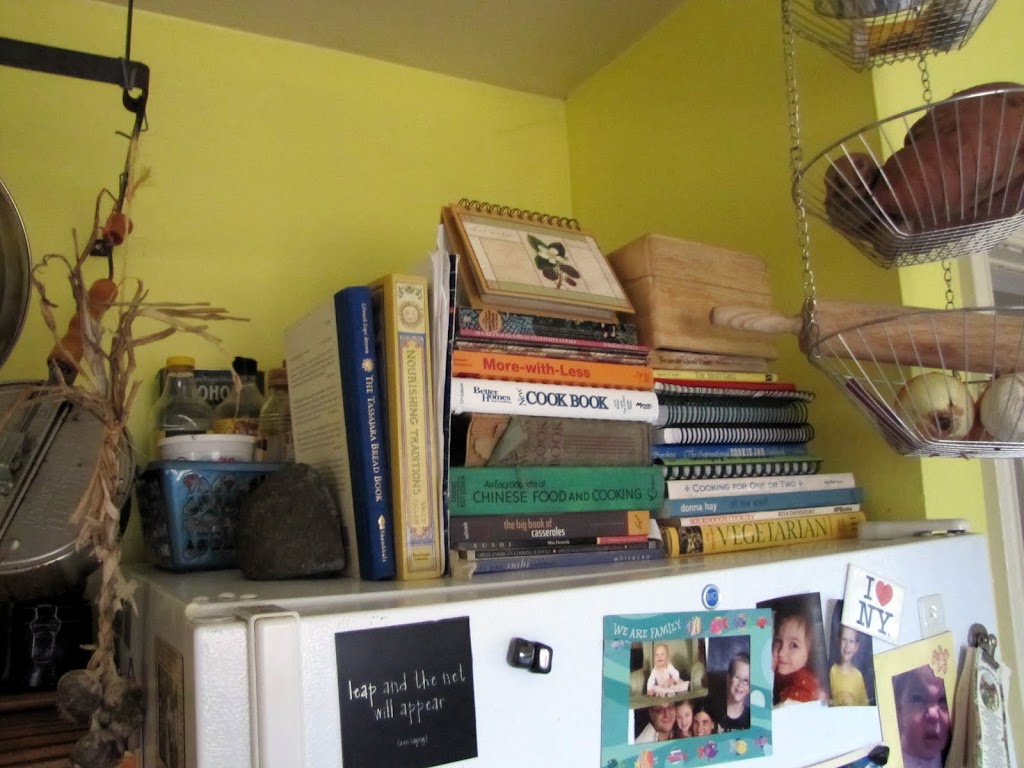 These are small changes, but they really are helping. Freeing up just that tea shelf and the silverware drawer are already making a difference. At the very least it’s got me believing that things are going to run a little more smoothly, and really that’s all you need when you’ve got two small children to care for…

—
Food this week has been simple and easy. I haven’t been bothered to menu plan, as things have been a little hectic all around. Lots of people, a bit of drama, definitely some heavy eyelids at the end of the day. I am starting to chip away at the stored food, but I’m also taking full advantage of fresh local goodies right now- they won’t be around forever. The beets from the farmer’s market were gorgeous and delicious. I roasted them and tossed them with sauteed onions and kale, then drizzled the whole thing with a balsamic vinegar reduction and sprinkled it with hulled pumpkin seeds (soaked and dehydrated first- see why here). 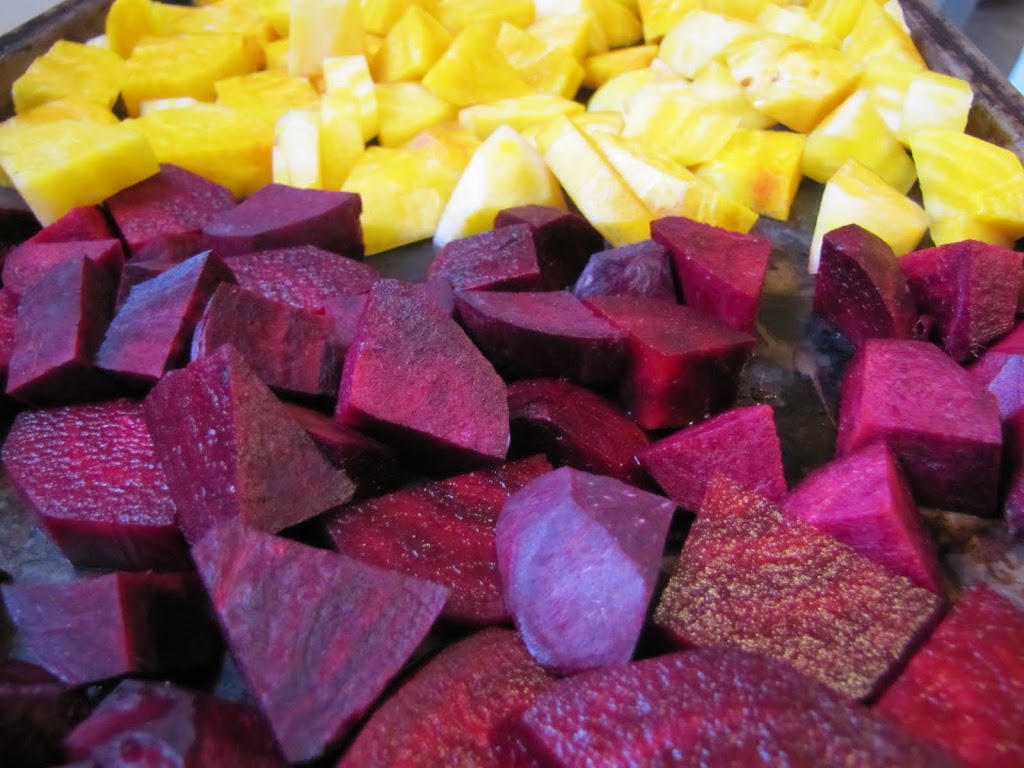 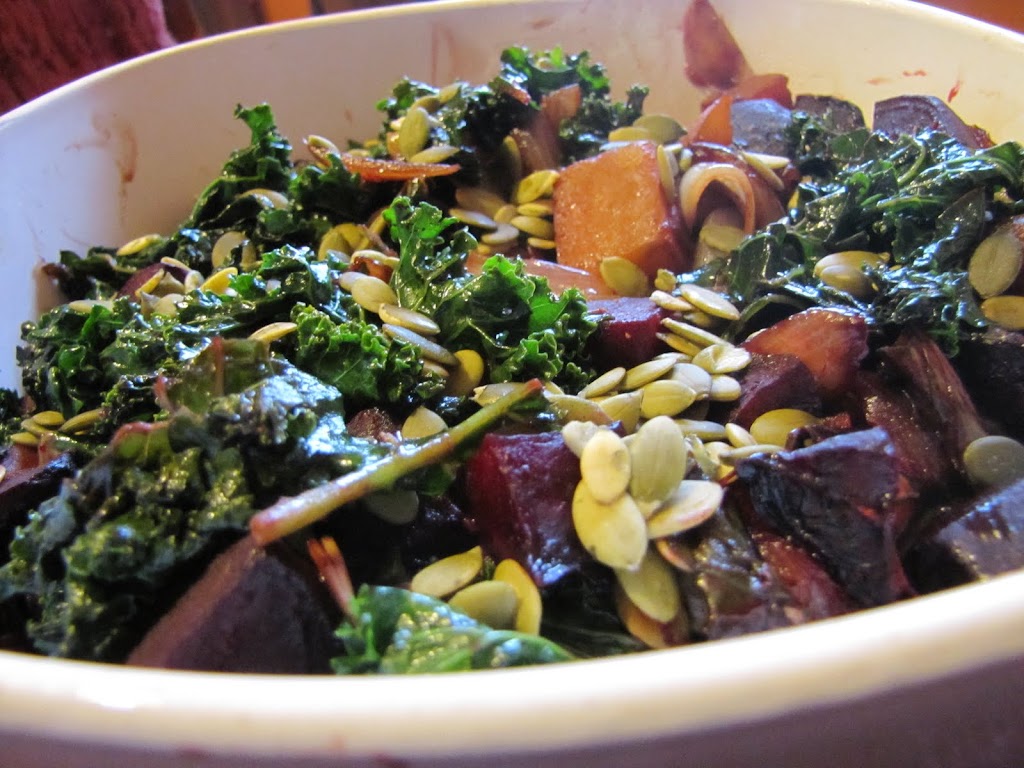 Two nights ago I tried my hand at a soaked pizza crust (recipe here), and it turned out beautifully. I was only able to soak about 8 hours, but even so, it was awesome. I did find that I needed about a cup more flour in the end than the recipe called for- just a warning. I topped it all with kale, onions, mushrooms and cheese… 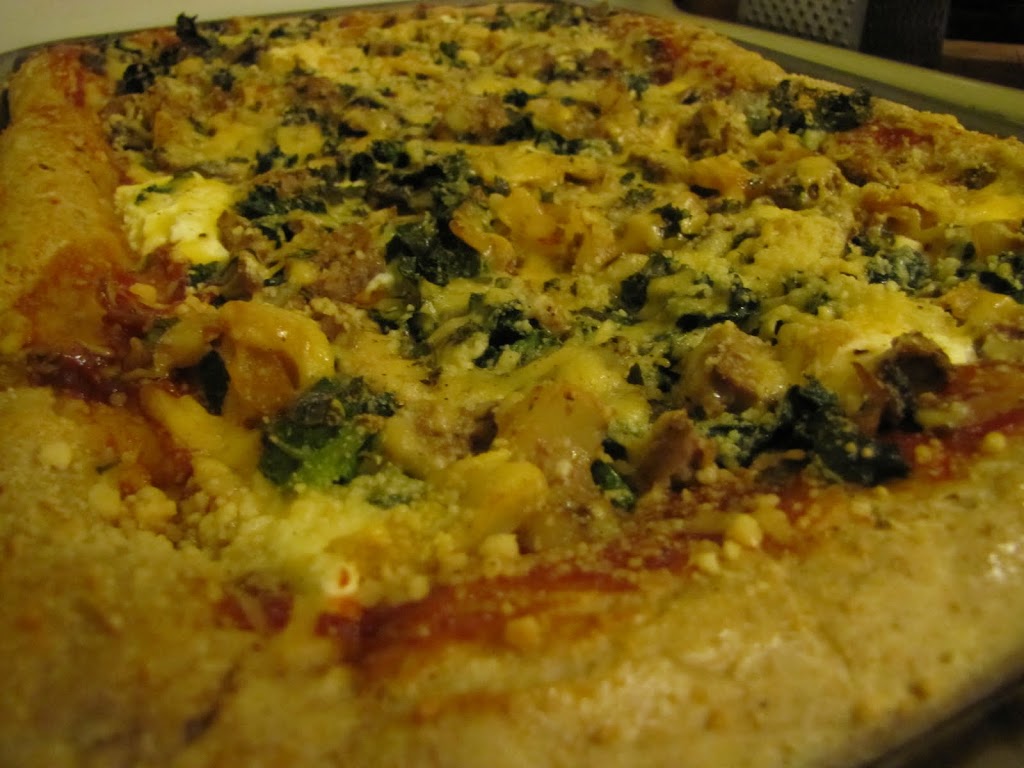 … and served it all up with the lettuce from the farmer’s market with local carrots and radishes. What’s funny is that I think we’re actually eating more locally now than we were through the summer. That may have something to do with the whole having a baby thing we did, but still. Even in November! 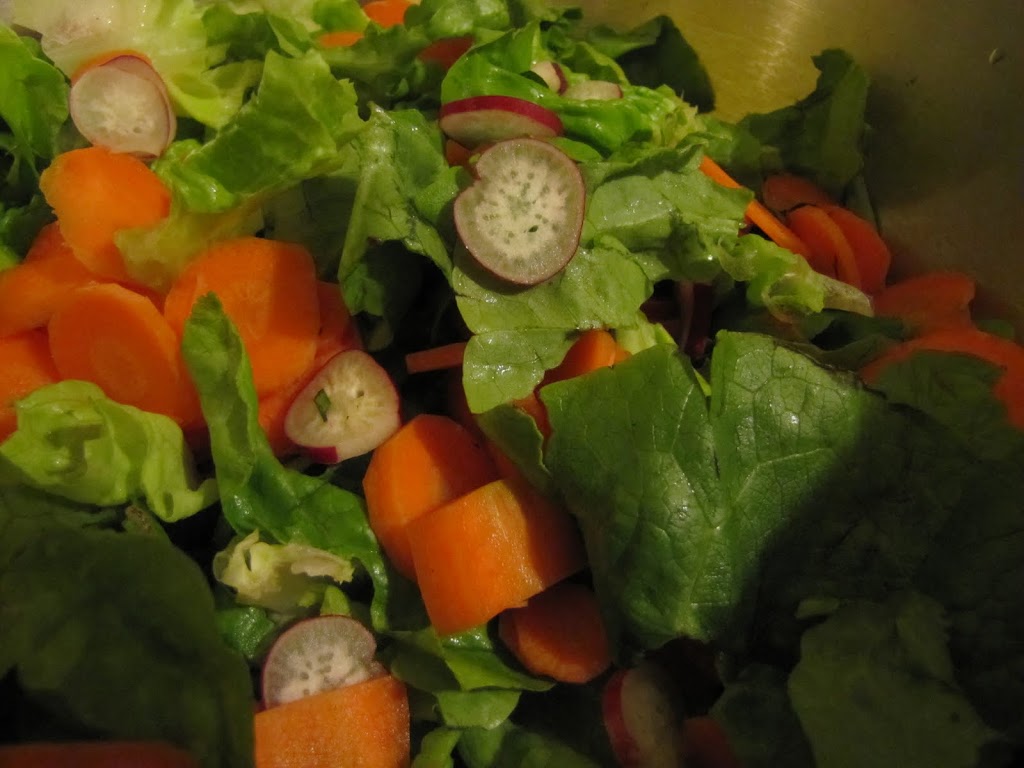 Oh also, I realized that I forgot to post the recipe for the walnut mocha torte! Here’s the recipe I followed, but I reduced the sugar in both the cake and the frosting and it was still delicious. I made an almond layer by just subbing almonds for walnuts, but found it was a little drier. So next time I think I’ll experiment with adding a little oil or applesauce or something… 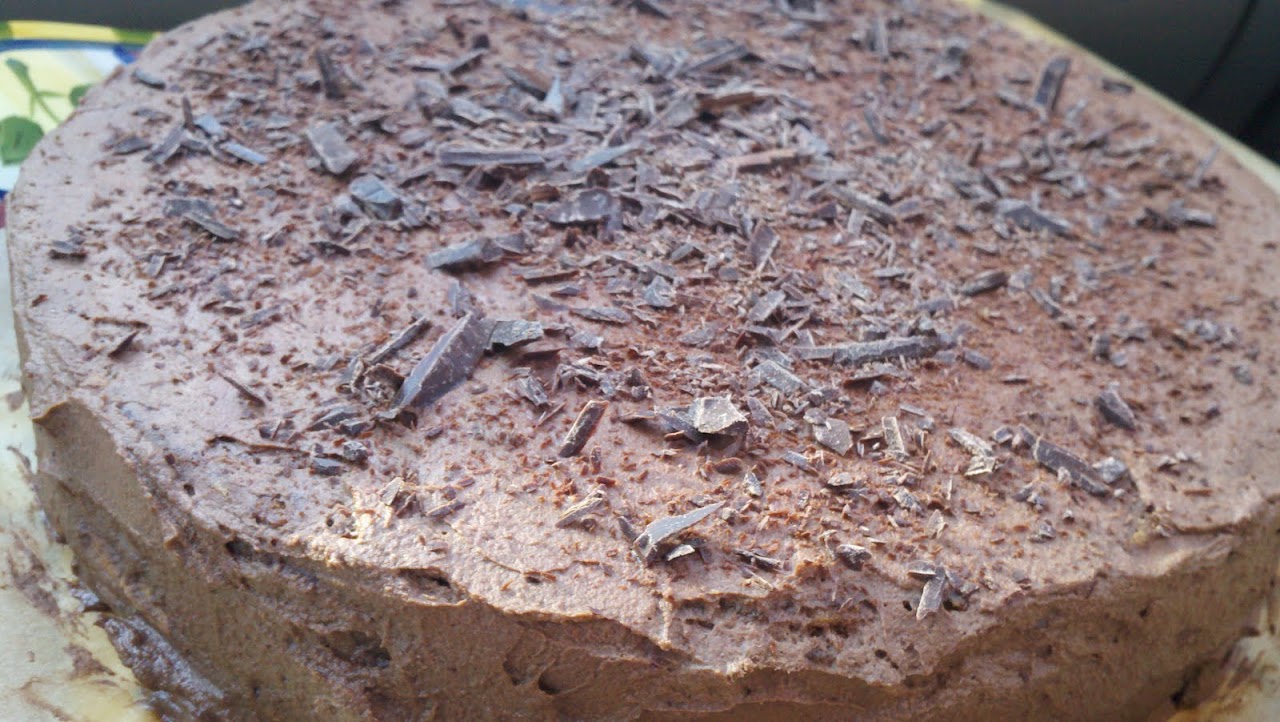 —
Today I just feel sort of compelled to say that eating together is important. The ritual of it, the time spent together, the extra attention paid to the meal and all those who’ll eat it. I recognize that with the pace of life these days it can sometimes be a tall order to ask that people spend time preparing food and to gather and eat together. However, last night, after a really long day, I sat down to a meal prepared for me. I prepare most of the meals around here, but this one was made by my awesome partner, and all I had to do was sit and eat and be with my family. It was a really good, simple meal, too. It felt like the eye of the storm, in some ways. There were no distractions- just us and some food on the table. Anyway, I’m going to try to appreciate that time together, because the world can be so uncertain and strange at times, and we are truly blessed to have the ability to sit together and be well fed each day. It’s one of the more primal and natural forms of fellowship, and I hope to pay better attention to it in the future.