Spring eating is here and I'm loving every minute of it. There was a point in the middle of winter where I was a little souped-out and we were buying citrus fruit just to make up the difference. We still ate well, but I so clearly craved FRESH. Here we are! These morels were gifted to us from some friends, and Jeff and I found another 10 or so just bopping around the woods the other day. I think we may try again just to see if there are any more, but I count this year as a success. 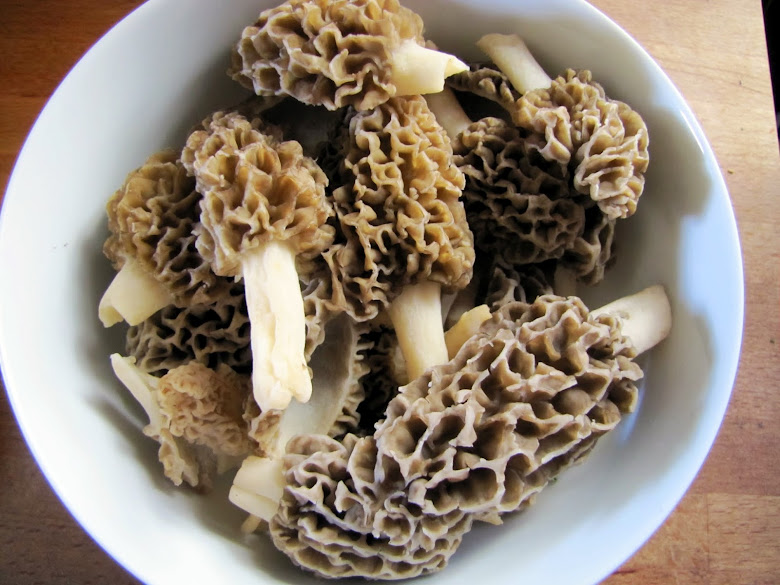 They weren't really enough to store, but they were enough to make a nice meal out of. We chose to sautee them up with some button mushrooms in butter, garlic, leeks, ramps, and a little salt and pepper. Mmm! We served the whole deal on sourdough crostini. On the side we had some simple grilled pork and roasted beets with goat cheese, and microgreens as always. So lovely!

I read an article recently about how people who take pictures of their food may be mentally unstable and have a bad relationship with food. The logic was that it was obsessive and fetishizes food. I laughed. Far be it from me to discount myself from being a mental illness candidate, but seriously? Isn't celebrating and thinking about food part of being human? It's part of how we bond to one another. It's woven into the fabric of every culture. Or at least it used to be. If anything, I think that the detachment from food (and not just food, but our source of life) is what is causing a lot of our problems. Yes, yes, I am a bit enthusiastic about the whole deal, but I think I'm only better for it. It's been healing. It's been purposeful. I'm healthy and happy, and I feel reverent about it. Anyway.

We made dandelion fritters the other day and they were fantastic. Dandelion heads gathered up by the whole family, dipped in a simple batter and fried up. So good.

I really wanted to do something with violets this year. I settled upon violet jam. We try to stay away from sweets for the most part, but I thought this would be nice to put on yogurt or toast occasionally. I plan to experiment with replacing the sugar in jams soon. We've got a bunch of rhubarb I have yet to process. Anyway, I decided to make the jam rather than the jelly, because I always hate the idea of losing the fiber from plants. I like to can my tomatoes with the skins and seeds, etc. I doesn't really make that much of a difference to me, but then again I'm not one of those people put off by textures. Back to the jam, though. It did take me several days to get around to processing these beauties. I learned that they hold up really well in the fridge, whereas dandelions definitely do not. You have to use those in a day or so. Violets? I bet you could keep them for a week or more.

We pureed them with water, sugar, and lemon juice. Then we added pectin and poured it into hot jars.

Pretty, no? It tastes really nice- more violety than I would have guessed. I love it!

This was just another nice food day. I love our simple fare. Just torn spinach, oats, sausage gravy and an over-easy egg.

What are you eating this spring?