I’ve decided to create a food labeling key, so that I can include all these details about some of our meals. I won’t do it all the time, but I thought it might streamline things when I do want to specify. So, here are the codes for the foods- feel free to weigh in if you think I’ve forgotten anything.

What do you think? Any suggestions? I’m not including things like "organic" because it’s just too hard to tell really. I mean, everything I grow is organic, and most of the things I buy are too, but often things aren’t actually certified organic (it’s expensive to get certified), and so I’m just not going to include it as a label here. Just assume it is unless it’s LT, but even then we’re getting good quality stuff. Here, let’s try it out on this awesome meal we had earlier in the week. This was a slow cooked brisket (LT) with garlic (hg) and spices (sb), served on top of roasted potatoes (sb), apples (LT), and sauerkraut (hg/f/hm). We had it with a side salad made with spinach (sb), cherry tomatoes (LT), and a balsamic vinaigrette (LT). It was awesome. 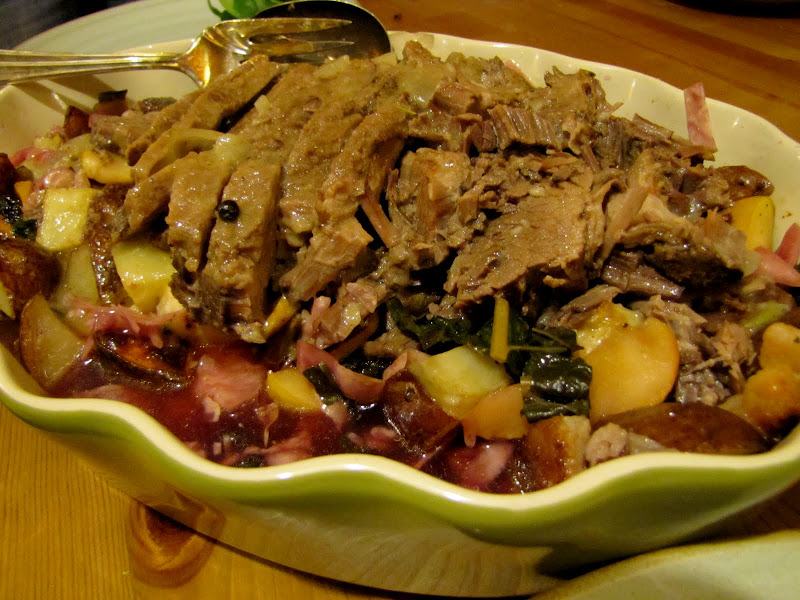 How did that work? Also, here’s a question: Do you think it’s unethical to serve liberated trash to people who aren’t informed of the origin of said food? I mean, at first I thought it to be fine, because I know that it’s good- I mean, I’m feeding it to my kid and family, you know? We’re using our best judgement, and it’s really perfectly good food. I mean, the other day we got 3 quarts of olive oil, just because one bottle had broken in a case. So they threw them all out rather than rinse them off. Olive oil! We also won’t be getting meat/dairy when the weather warms up, etc., and we are just smart about it. There are a lot of apples and pears and oranges that we’re eating (usually thrown out because 1 has gone bad in the bag). But then the other day we were having Jeff’s sister over for dinner, and she specifically requested there to be no dumpster food in the meal. That got me thinking about it. I’m leaning towards it being fine not to tell people, because honestly, I’m more concerned about whether or not something is laden with pesticides or has been raised in a cruel and unethical way than I am about whether or not it expired that day. However, I consider it rude to pepper people with questions about food origins, especially when it’s being offered to me. I mean, it’s one thing if you have a food allergy/sensitivity/whatever, but I’m not going to turn my nose up at someone’s nicely prepared meal because they didn’t buy everything organic. Is this different? I’m not trying to be dishonest, but I’m just wondering if I truly need to have that conversation all the time. What do you think?

Last week I began the process of pickling some carrots. This week… oh they are so nice! Take a look: 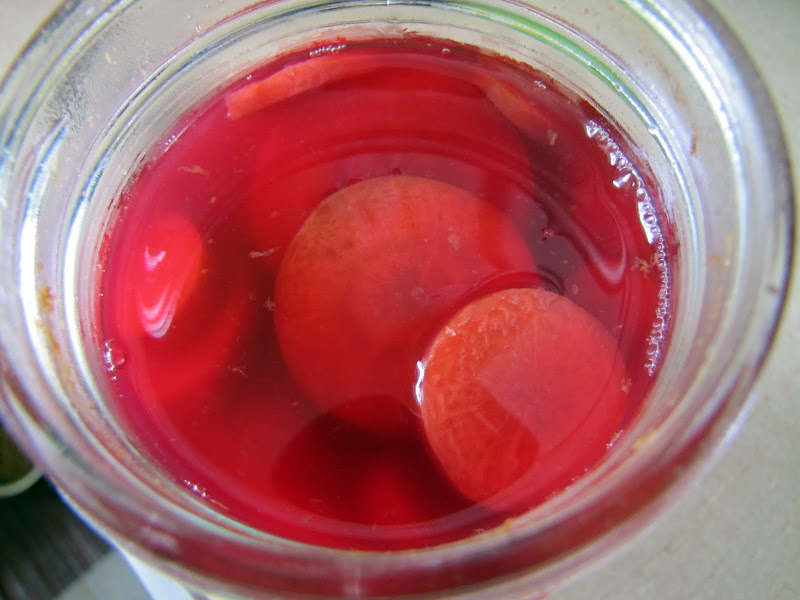 I kept them at room temp for about 4-5 days (it’s kind of cool in our kitchen), and then I transfered them to the fridge. The brine turned this beautiful red, a mix of the purple and orange carrots I began with. They smell sweet and very carrotty (oh it’s a word), and slightly sour… like a mild pickle!

I decided to try some today with my breakfast- a cheese omelette (LT/hg) with an apricot (LT). They were delicious! They were crunchy, sweet, slightly gingered and a little tart. I gave Vera one to try and she proceeded to steal the rest off of my plate. We both had second helpings. I mean, that’s a good thing when it inspires your 3 year old to steal them off your plate first thing in the morning and then ask for seconds. YUM! 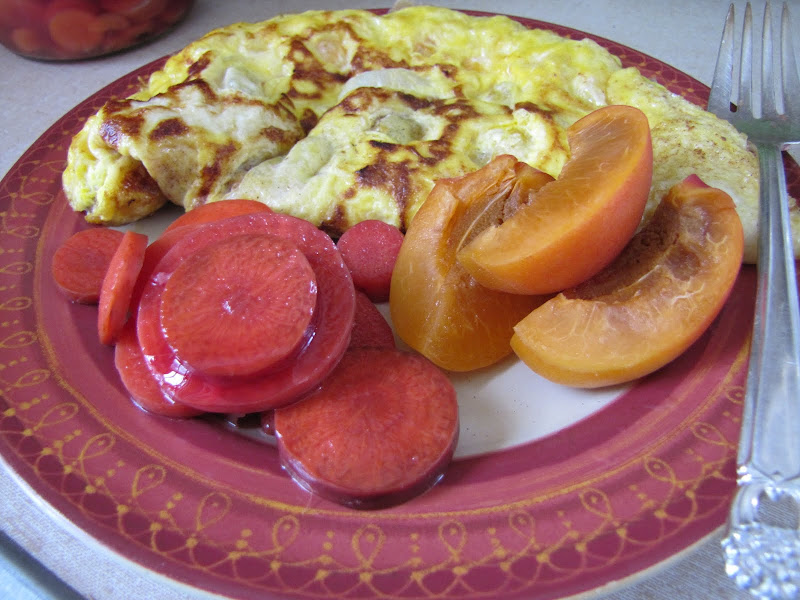