Being well. I’ve been thinking about it lately. Why is it so difficult for us these days? I feel like I so often read about chronic conditions and digestive issues, and yet it’s like our species is far behind in terms of our instincts in these areas. I think, while temporary sickness is sometimes inevitable and hard to avoid, it’s lack of everyday health that is the real epidemic here. I just learned that 80% of all Americans are on at least one prescription drug. 50% are on at least two. Americans are 5% of the world population, and yet we’re taking 50% of the drugs. What the hell is going on? Why are we so sick? Why are 80% of us living sick? I think a big part of it has to do with the environment, but a huge part of it comes down to what we put in our bodies.
My friend and I started talking about this because we were discussing soy. It’s a controversial subject, but basically soy is a food that is simply not good for us. It’s just a little bean, but this little bean has learned to do it’s job of propagating so well, that it’s defenses are such that they are hard to get around. Basically, it’s full of toxins- natural defenses that are meant to deter animals from eating it! Phytic acid, trypsin inhibitors, nitrosamines– all toxic substances that can inhibit the absorption of nutrients and actually cause nutrient deficiencies. I read that in the wild, animals will avoid soy. They have actually linked fertility problems and cancer to animals who are fed soy feed. It’s been linked to a host of fertility and thyroid problems in humans, as well as cancer. Yikes! From the research that I’ve done, the only really safe way to consume soy is after it’s been fermented (miso and tempeh are good examples). And yet, this cheap food is thrown in practically EVERYTHING. We could have a basically identical conversation about sugar/corn syrup, but I won’t get into that. Anyway, those are just the details, but my friend and I were wondering why people don’t seem to be able to avoid toxic foods, and yet animals’ instincts seem to remain intact when left to their own devices. We decided that perhaps our instincts are still good, we just don’t know what it’s like to feel well anymore, and we aren’t given the option to do so when we think we’re buying one thing, but it’s full of a million other things.

The reason we have this theory? Because we’ve stripped most of the toxic stuff out of our diets and we feel better. I have a dear friend who teases me about how my health is really just going to screw me in the end because I’ve lost my ability to cope with all the toxic stuff. We laugh about how he’s built up immunities to all the crap, and I’m just going to whither away because of it. But honestly? I think I started becoming more sensitive to this stuff because I finally knew what it was like to be well. I have a decreased tolerance, but it is one that protects me. Just like for thousands of years our ancestors have known how to soak their grains, seeds, and nuts before eating them. It’s simple. It’s because they knew that they couldn’t digest them well otherwise. But in our culture, it’s plastered all over the media- "Not feeling well? You’re normal! Take this!" For the record, I don’t think it’s normal not to feel well. Our bodies are incredibly resilient, as is shown by our ability to consume loads of toxic stuff and merely have it slowly kill us.

Ultimately, our ignorance of our own bodies and well-being puts us in a world of trouble- not only in terms of our environments, but by causing everything from cancer, heart disease, diabetes, allergies, etc.  Obviously there are exceptions to the rule, but overall I think these things are avoidable, and they are killing most of us. I know it’s kind of complicated to change everything at once, but I really think that if the health of our bodies isn’t a priority, then we’ve gone a little crazy. Anyway, I came across this website and thought it was great- it’s basically an outline of what to eat/ what not to eat. I love it.

Anyway. That’s the end of my rant. On to my food accomplishment this week. It’s a big one. LIVER. I hate liver. It tastes really bad to me. It’s very good for you, but ew. I’d rather not. Recently though, I tried this chicken liver pate at a potluck lunch, mostly to be polite. It was actually good. So this past Thursday we got together and made it. I’ve actually been eating it over the past week and it’s… dare I say it… delicious! Granted, it doesn’t have that gross liver taste because it’s mostly mushrooms and butter… but the liver is there, for sure. Vera eats it up and says "Deeeeelicious!" That’s something. So, I don’t think there will be much in the way of liver in our lives, but this recipe is here to stay. I’m glad to be able to get such a nutritious food into our diets, too. 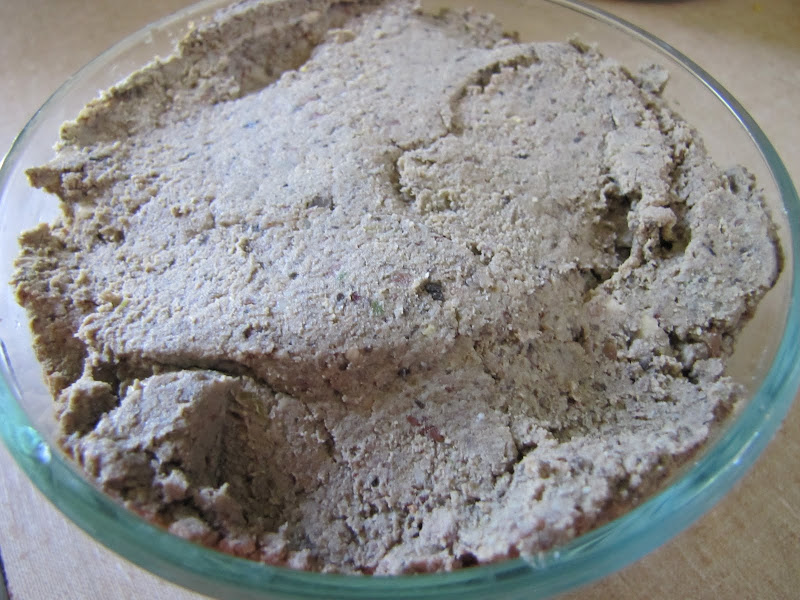 Sauté liver, onions/scallions, and mushrooms in butter until thoroughly cooked. Add to other ingredients and puree in food processor.

Super easy, and seriously delicious! I couldn’t believe it. I still kind of can’t. I’ll eat some today. Weird. 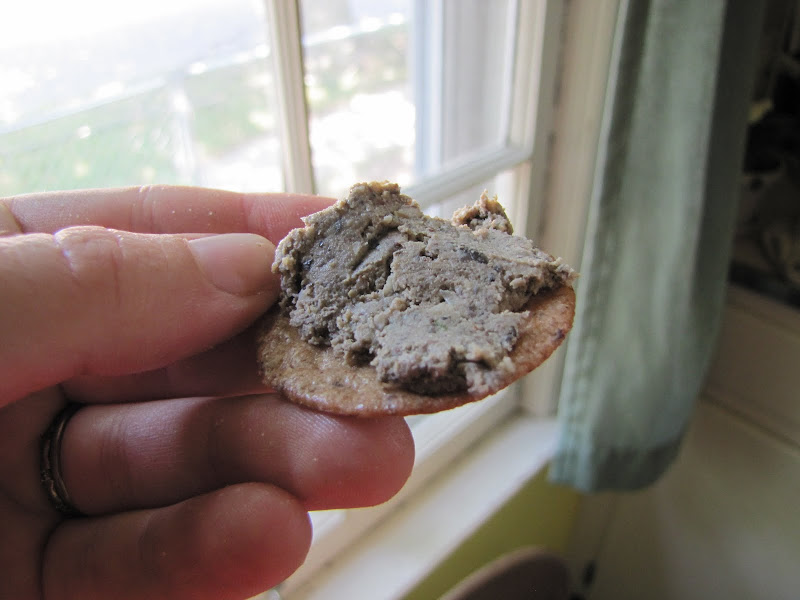