Here’s a little introduction to lacto-fermentation, for those of you who are unfamiliar with it. This was taken straight from the Weston A Price Foundations website:

It may seem strange to us that, in earlier times, people knew how to preserve vegetables for long periods without the use of freezers or canning machines. This was done through the process of lacto-fermentation. Lactic acid is a natural preservative that inhibits putrefying bacteria. Starches and sugars in vegetables and fruits are converted into lactic acid by the many species of lactic-acid-producing bacteria. These lactobacilli are ubiquitous, present on the surface of all living things and especially numerous on leaves and roots of plants growing in or near the ground. Man needs only to learn the techniques for controlling and encouraging their proliferation to put them to his own use, just as he has learned to put certain yeasts to use in converting the sugars in grape juice to alcohol in wine.
The ancient Greeks understood that important chemical changes took place during this type of fermentation. Their name for this change was "alchemy." Like the fermentation of dairy products, preservation of vegetables and fruits by the process of lacto-fermentation has numerous advantages beyond those of simple preservation. The proliferation of lactobacilli in fermented vegetables enhances their digestibility and increases vitamin levels. These beneficial organisms produce numerous helpful enzymes as well as antibiotic and anticarcinogenic substances. Their main by-product, lactic acid, not only keeps vegetables and fruits in a state of perfect preservation but also promotes the growth of healthy flora throughout the intestine. Other alchemical by-products include hydrogen peroxide and small amounts of benzoic acid.
A partial list of lacto-fermented vegetables from around the world is sufficient to prove the universality of this practice. In Europe the principle lacto-fermented food is sauerkraut. Described in Roman texts, it was prized for both for its delicious taste as well as its medicinal properties. Cucumbers, beets and turnips are also traditional foods for lacto-fermentation. Less well known are ancient recipes for pickled herbs, sorrel leaves and grape leaves. In Russia and Poland one finds pickled green tomatoes, peppers and lettuces. Lacto-fermented foods form part of Asian cuisines as well. The peoples of Japan, China and Korea make pickled preparations of cabbage, turnip, eggplant, cucumber, onion, squash and carrot. Korean kimchi, for example, is a lacto-fermented condiment of cabbage with other vegetables and seasonings that is eaten on a daily basis and no Japanese meal is complete without a portion of pickled vegetable. American tradition includes many types of relishes–corn relish, cucumber relish, watermelon rind–all of which were no doubt originally lacto-fermented products. The pickling of fruit is less well known but, nevertheless, found in many traditional cultures. The Japanese prize pickled umeboshi plums, and the peoples of India traditionally fermented fruit with spices to make chutneys.

This is the original pickle! As a species, we definitely developed a relationship with these lactobacilli, and only recently abandoned it with modern ways of food preservation. I can only assume that we’ve suffered for it. Health of the gut cannot be overemphasized, and the more research I do about it, the more I’m convinced that we should really pay attention to this area of our diet- as a form of preventative care, even a way to treat current ailments. One of the things I’ve read told about a study done with two groups of rats. One group was given a powerful antibiotic. Then, both groups were exposed to mercury. The mercury got into the bloodstream of about 90% of those rats given the antibiotic, but only 1% of those without. Pretty wild, and it speaks volumes about the importance of our relationship to healthy bacteria. I’m not knocking antibiotics- in fact, I’m fairly certain they saved my life after I got a kidney infection in high school. However, it does make me wonder how many ailments could be prevented if we only continued to eat the foods that have a history of protecting and nourishing us. What are we thinking stripping these things out of our diets? Perhaps it’s time we adopted the saying "A pickle a day…" Anyway. Oh, another little tidbit- breastmilk is teaming with beneficial bacteria (not to mention it contains all sorts of antibodies, stem cells, etc. It’s incredible stuff!). A year or two ago my niece had an ear infection. My SIL didn’t want to take her in to get antibiotics, and asked if I would donate some of my milk to try first. She put the milk in her ears for a few days, and it cleared up completely. Cool, huh? I mean, I guess the thing that confuses me is why we haven’t done more research in the way of using probiotics to treat things, or at the very least why we don’t follow every course of antibiotics with powerful probiotics- as it clearly opens you up for recurring and/or new infections. Anyway, those are just some thoughts of mine. But back to the veggies.

Thankfully there are still some traditional cuisines that take pride in their pickled goodies (like kimchi served at any Korean restaurant, etc.), but on the whole people don’t have this as part of their daily diets. My family on my mom’s side are descendants of the Pennsylvania Dutch. There’s actually a lot of foods that I’ve been happily raised with- sauerkraut, pickled beets and eggs- although the modern preparations often have the sauerkraut getting canned under high-heat (and killing all the beneficial bacteria), and the beets are now pickled with vinegar rather than salt and water. Anyway, last year I started experimenting with this stuff, and it’s actually really easy. The sauerkraut I made is now a regular part of our diet, and sometimes I even crave it and will just eat a spoonful of it out of the fridge. Vera loves it, too. Although, she especially loves the pickled beets I made, and will eat those and ask for seconds. I’ve also pickled radish (which is SO good), cucumbers (although I barely got any this year!), and I’ve done some lacto-fermented condiments that I make regularly. It’s really not hard at all! Plus, what’s so great is that you will know when you shouldn’t eat something. They say there’s no way you’ll be persuaded to try it, your nose will tell you to steer clear. I learned that very clear lesson when I tried to ferment some asparagus last year. Something went wrong in the fermentation, and oh.my. I would not eat that ever. So that was cool, because I’ve been able to learn to trust the process, even though at the beginning I was a little squeamish at the idea of intentionally inoculating my food with bacteria… Actually, I’m finding that it keeps food safer! So, here are some fun things I’m doing with lacto-fermentation:

First, I made whey by straining some of my yogurt overnight. This is super easy, just be sure to get yogurt that has live active cultures if you decide to do this. 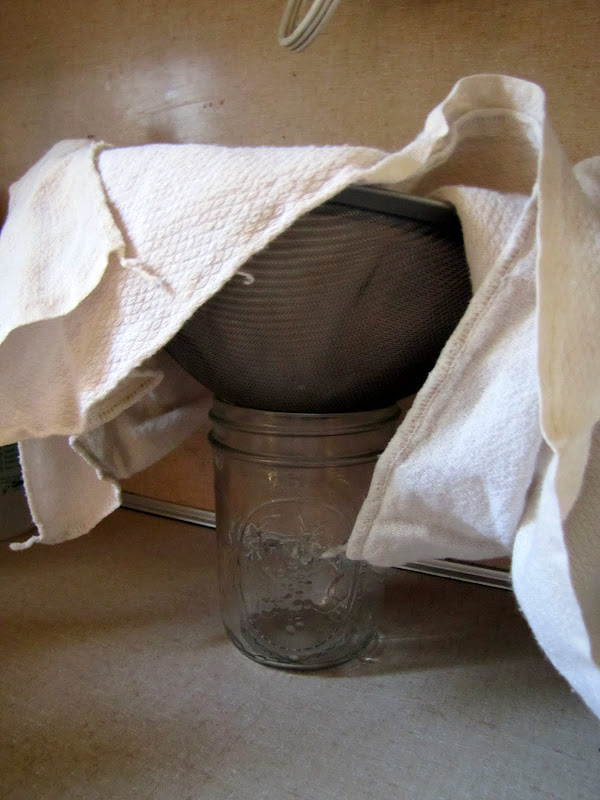 This gives me delicious yogurt cheese, which is just awesome and can be used in a number of ways. 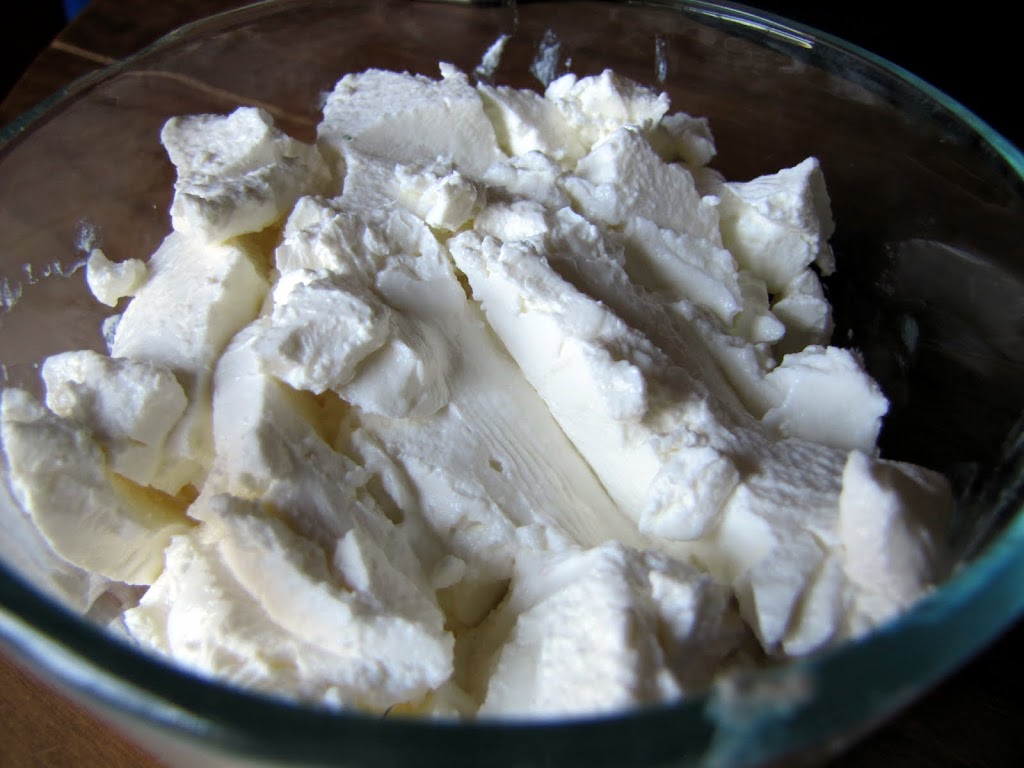 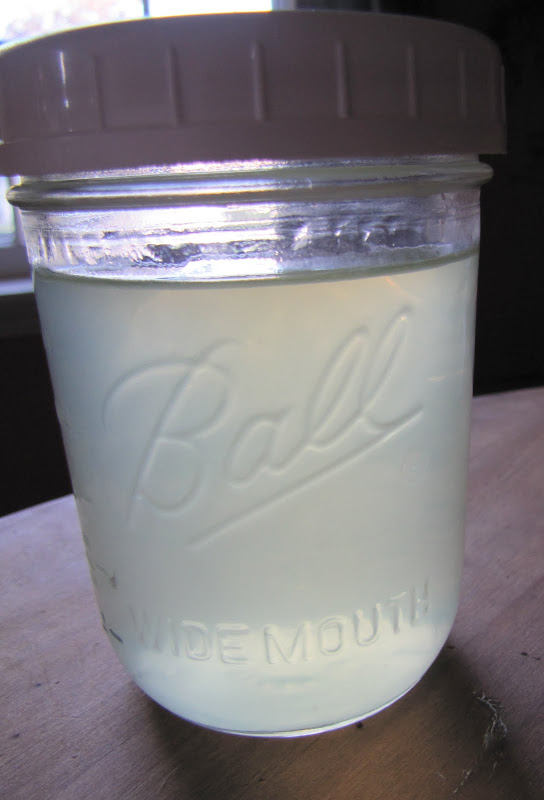 I decided to make more sauerkraut, but this time I would mix the last of my purple and white cabbage with some kale. I can never get over how beautiful red cabbage is when you cut it all up… so pretty. 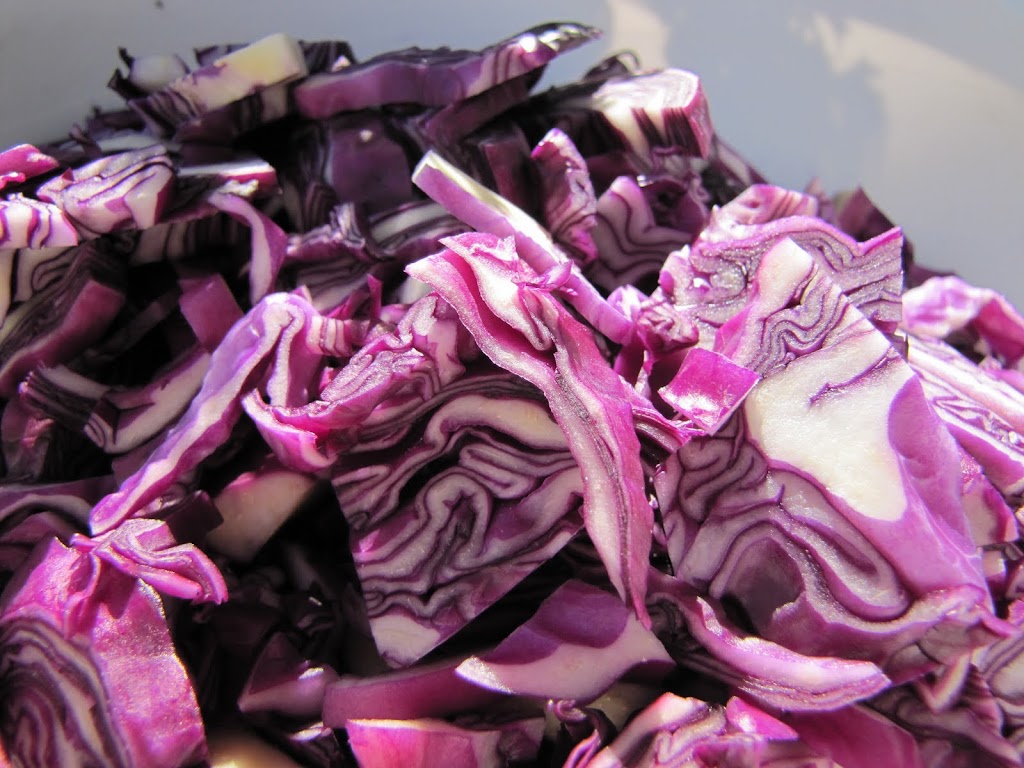 So here’s my alternative ‘kraut. I actually really like it to be crunchy with good sized strips, so I didn’t shred it in the food processor like I did last time, I just cut it up by hand. This meant that there was less liquid given off by the cabbage, but I just added some water in the end to compensate. 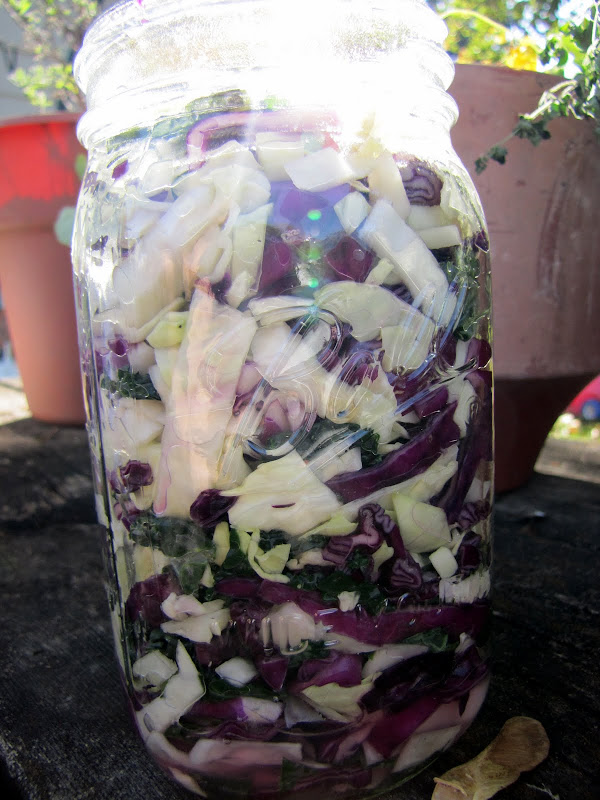 Chard stems. I found this cool recipe which gave me the idea, although I only used salt, water, and a few mustard seeds in mine. 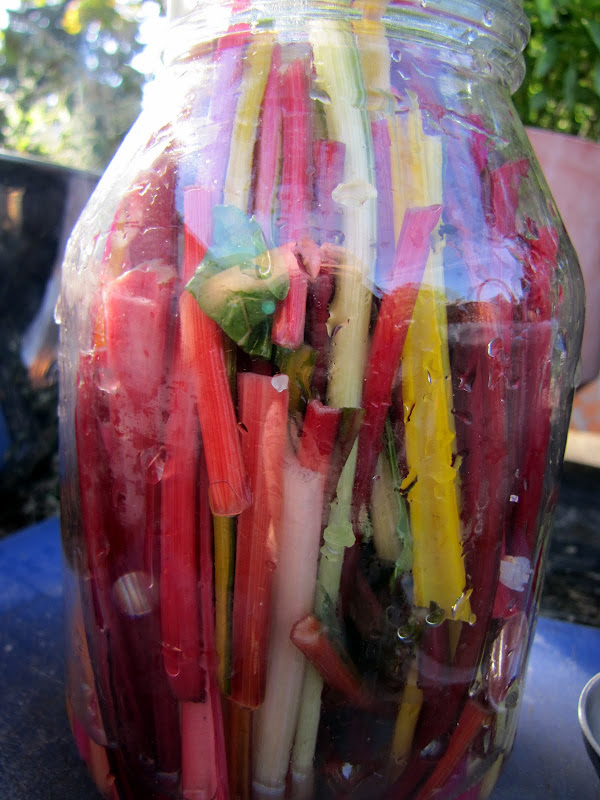 There’s a basic recipe for most of these things (when you’re doing vegetables). It’s generally a tablespoon of good quality sea salt to a quart. Then you add 4 tablespoons of whey, or, in absence of that, another tablespoon of salt. Then you can either pound out the liquid in things that have been salted and shredded (like cabbage, carrots, etc.), or, you add enough purified water (I generally just boil some on the stove to remove the chlorine and let it cool, and then top off my jars with that) to cover the vegetables, leaving about an inch of headspace at the top, because it tends to expand a little during fermentation. Then, you cover it tightly and leave it on the counter for about 2-4 days, until bubbly and sour smelling. I check occasionally to make sure the veggies are submerged and kind of push them down with the end of a wooden spoon. Then you just transfer it to cold storage (the top shelf of your fridge should work, or if you happen to have a root cellar- but generally around 40 degrees is perfect.) and let it mature. The longer it’s stored the better the flavor, I find. My sauerkraut from last year is just getting better and better.

Here’s what I’ve got so far- my chard stems, the cabbage/kale sauerkraut, and then my first try at kimchi- made from the long-forgotten and overgrown kohlrabi in the garden. For that I just did cubes of kohlrabi, onion, red pepper, a chili pepper, several cloves of crushed chopped garlic, a few squirts of sriracha,  the salt, the whey, and covered it with some water. It’s already delicious… I can’t wait to see how it tastes in a few months. I made it a little on the mild side, so that I can attempt to give Vera a taste for it. 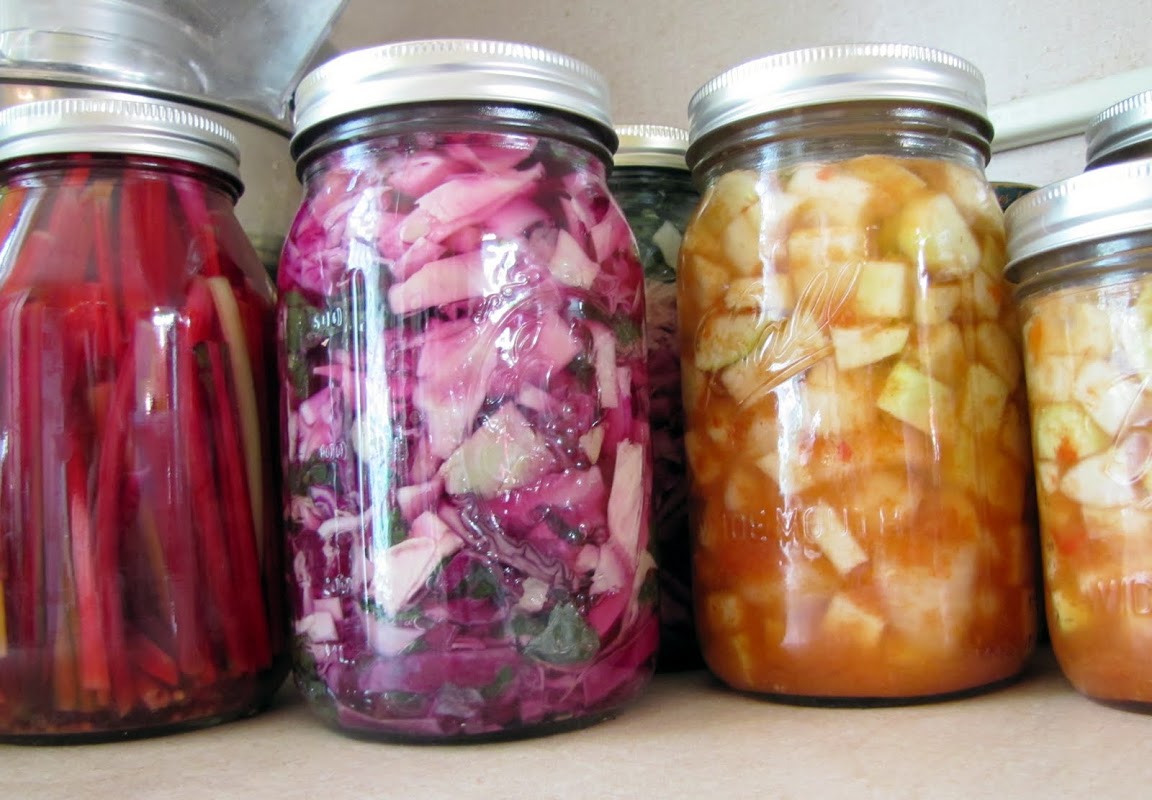 Today I’m doing more of this- I’m doing some napa cabbage for some more kimchi, and I’m also trying out some fermented ginger carrots. The variation on these things is also really nice- it doesn’t all taste the same. I’m experimenting with spices and different vegetables, and while all of them tend to be tart, they aren’t vinegary like conventional pickles. I’ve really grown a taste for them, and I include them with more meals than I thought I would when I first started doing it.

—–
Bonus- our breakfast this morning. Scrapple. It’s an old recipe brought about by people creatively using all of an animal. Basically, you take pig "extras" and boil them into a broth (I know that traditionally you would often see a whole pigs head in the stock pot… but anyway). I used a ham hock, but you can use any number of things. Then you pull out the hock or whatever you’re using, and pick off the little bits of meat. You then stir in cornmeal into the broth along with the bits of meat, some salt and pepper, and some herbs if you like. Oh, also people like to add in cheddar cheese sometimes. Then once the cornmeal is cooked, you pour it into greased bread pans and let it set in the fridge. Then you pop it out of the bread pan, slice it, fry it up on both sides, and serve it drizzled with maple syrup… It’s SO GOOD. It’s that great mix of salty sweet that is so good but hard to put a finger on. If you don’t have those "extras", then you can always make it with broth and throw in crumbled sausage, same kind of idea. I grew up occasionally getting scrapple, and it was always a treat. And now, I also see it as a frugal, nourishing, and ethical recipe- one that puts to use all parts of an animal rather than wasting it. Vera has seriously eaten 4 thick slices of it today. So that should tell you something. 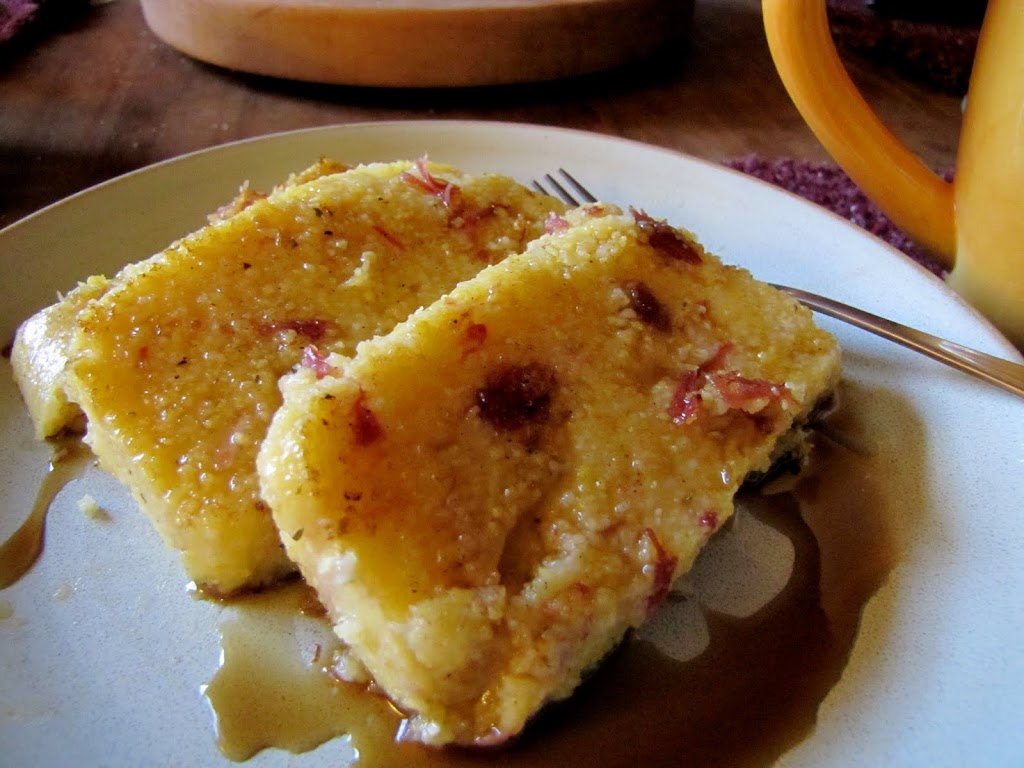