Oh we are having fun over here. Food has been a mix of silly over-the-top creations or really simple stick-to-your-ribs kind of fare. A good balance during these cold months. My sister and I saw a recipe for baklava made with brie, and we had to make it. In the end we just made phyllo rolls, not the whole layered casserole dish. I will definitely make these again, they were delicious.

They were really simple too. Phyllo dough, a few sheets thick with melted butter brushed between layers. We put pieces of brie and chopped pecans and a sprinkling of cardamom, cinnamon, and nutmeg. Then we rolled it up and baked them at 350 until they were golden and flaky. We also made a honey dipping sauce for them with the leftover spices and a little honey and water on the stove. Yes.

I had leftover phyllo dough, so I decided to do a play on a pot pie. Just ground beef and root veggies and parsley in a simple gravy, poured into a casserole dish lined with phyllo brushed with butter. Then I folded the edges of the dough up over the filing and baked until golden. This was really really satisfying. So hearty and perfect for this weather.

I'm really loving rutabaga lately. I've been buying a big one each week and doing different things with it. It's super good just steamed and mashed up with butter and salt and pepper, maybe a little sour cream. So good! Here was a simple meal- mashed rutabaga, steak, microgreens, pickled beets, and a herb yogurt sauce.

My uncle gifted my mom and I some dried morel mushrooms that he hunted in the spring. He's got a gift, that guy! We decided to collaborate and pool our stash to make something nice together. I really thought it would be nice to do an eggs benedict type meal with them.

It turned out beautifully. We skipped the bread since my mom is grain-free these days. Poached eggs on a bed of baby greens, marinated beef, and sauteed morels. Topped with hollandaise. Side of roasted squash, brussels sprouts, cauliflower, onion, and peppers. It was pretty much perfect.

My cold storage these days is looking more like a closet full of empty jars. As it should be by March. 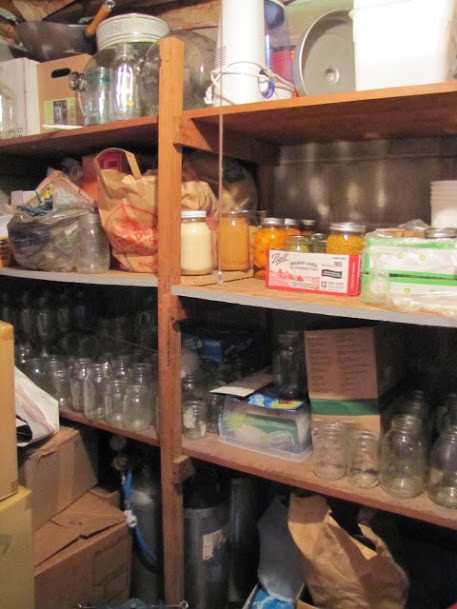 I was disappointed when our tomatoes ran out last month. Then I had to kick myself because just a few short years ago I was over the moon happy that the tomatoes we'd stored lasted through the end of December. This is what's left now. Some green tomato relish and a jar of corn, some applesauce and fruit. Pretty good considering how busy we all were last summer, and how crazy everything got during the prime storage time. It was the furthest thing from my mind back in October when I could have made a big push. But what this does tell me is that I think it's totally possible that we'll be able to really provide a lot of our own food in the future.

Today I got to work on fermenting things. Below is a second ferment on kombucha. It's taken like a month to brew this batch! The winter slows stuff down. The second ferment just means that I add a little juice concentrate (to get the fermentation going again a little) and use a flip top bottle to seal in the gases. This step makes it really carbonated, which everyone likes. I like to add dried fruit, ginger root, all sorts of things to the second ferment to flavor it.

I'm also starting back up with water kefir. We all love it, I don't know why I stopped brewing it. This batch I'm going to do a second ferment with vanilla beans. I'm thinking it will turn out like cream soda!

I also got some new room temperature dairy cultures. These are a yogurt and a buttermilk culture. The buttermilk culture can also be used in cream to make creme fraiche. I'm working to do more of my own dairy processing (cheese to come? We'll see.) since I really prefer to use the good raw milk we get, if only because it's 100% grass fed and unhomogenized. Plus I just became aware of this A1 vs A2 milk issue. The cows from our raw milk coop are Jerseys, which are mostly A2. I have to pasteurize some of the milk to create a "mother culture". Basically the raw milk has it's own living culture which will, over time, compete with the one I'm trying to inoculate it with and weaken it. This results in a less reliable product, so it's worthwhile to pasteurize a little milk and culture that, and use that fresh strain every time you go to ferment.

Anyway, more to come! I've been working on some penny saving stuff and organization, and I hope to share that soon. Also, I think I may change this to just a general food series, since it's been a little difficult to shake one out specifically on Wednesdays.