I’m new to this whole bread-making thing. Although my childhood was filled with good homemade foods, bread was not really one of the things that came out of our oven. The bread I do remember making was generally sweet (like banana bread or something) and wasn’t a regular thing in the house. I do remember one friend of mine (you know who you are) had nothing but homemade bread in her house. It tasted so good and fresh. We all loved it. Her house smelled amazing, too. Fresh baked bread with a hint of kitty litter and laundry… interesting memories. Anyway, I have distinct memories of her mother kneading bread dough like it was just second nature.

Anyway, I’ve had my challenges with sourdough. I’ve made lovely loaves with the addition of commercial yeast, but I ultimately don’t want to do that- I want all of the benefits of real, fermented, healthy bread. Otherwise, I honestly think it’d be better to go without it. Anyway, with the exception of this no-knead sourdough I did, the rest have been flops. They’ve come out super dense or have flattened- so much that it’s pointless to make a sandwich- it looked more like biscotti. I would have just gone completely with the no-knead recipe, but I realized that I really wanted bread that was like the stuff we bought from our local sourdough bakery- hearty and a bit more fluffy and versatile. I also wanted something I could build on so that I can make a variety of breads and develop our own favorites. I was getting discouraged. The other day I took a two week old loaf out of the fridge and threw it on the floor with a big THUD. Jeff looked at me, puzzled by my behavior, and asked what the heck I was doing. I told him I was just wasting money at that point, making silly loaves of bread that we wouldn’t even eat. I complained about my inability to make something that’s supposed to be so basic and simple. He said "You know, I’m willing to invest a little in you so that you can develop this skill. I don’t care if it costs us a little at first. Don’t be discouraged." Amazing. Can I just say how much I love this man? It’s a good thing he said what he did, because the next loaf I made turned out perfectly. 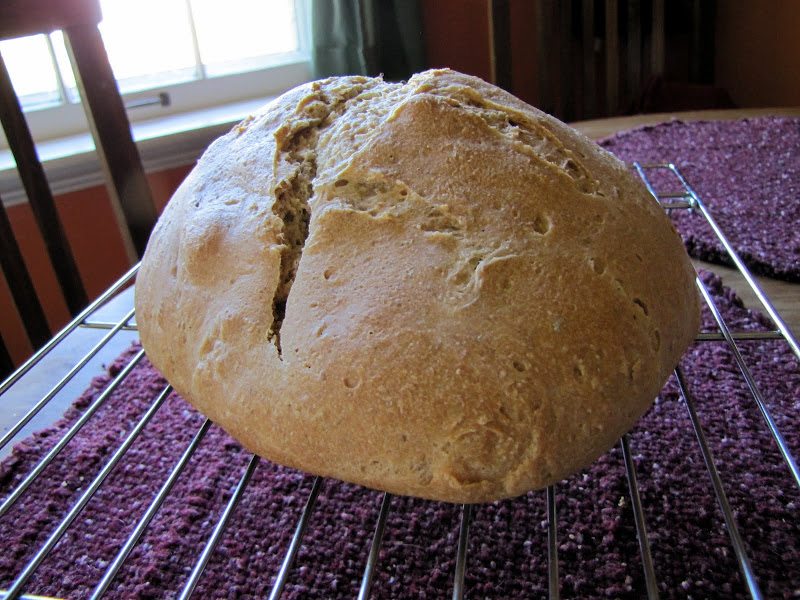 A few things were different. I really proofed my starter this time, to make sure it was super active (this basically just means that I fed my starter culture with flour and water and let it sit at room temperature until it got really really bubbly). I also switched up my flour and used just the starter and some unbleached all-purpose flour. I figure I can play with different flours/blends when I get better at doing the basic loaf. I also found a recipe that said to let it rise for only four hours at first (not the whole night like every other recipe I’d seen), and then to put the loaf in the fridge until a couple of hours before baking. I tried this and the rise was perfect. I honestly think that some of the problem was that the loaf had over-risen and deflated. This recipe also said to spray water inside the oven to create steam to help with the rise. Of course, I also had just received words of encouragement- perhaps that was the ticket. Anyway, who’d have thought it’d be such a science? 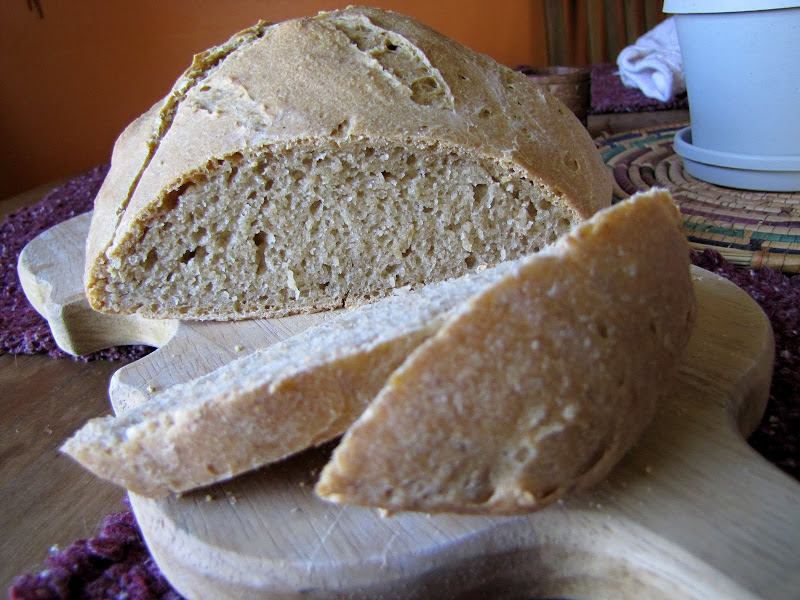 I suppose there’s a little extra work in it, but it’s still extremely simple to do. I have visions of myself in the near future not even using a recipe- just making bread each week for our family. I can see myself just knowing when the dough is right, when the rise is right… just knowing. It’s like that with so many other things I’ve started in the past- why not with this? Anyway. My journey with sourdough continues- and now I’m armed with a bit more humility and little more determination. The other thing I’m excited about is teaching my kids how to make bread. Hopefully when they go off on their own, they’ll just know how to make this basic, nourishing food for themselves (even knowing how to make their own sourdough starter straight from the air where they live!).

—
Bonus: I thought I’d just share a meal we had this week. It was a treat- our friend who lives downstairs had a big hunk of salmon that he didn’t know what to do with- he doesn’t cook much. He asked for our help and a shared meal in exchange. We happily obliged. We don’t get to eat much fish these days. The good stuff is expensive, and the industry is pretty horrible. It’s a special thing, that’s for sure. Anyway, here’s what we did:
Savory polenta (cooked with homemade stock and herbs, well seasoned and buttered, with a little goat milk feta stirred in at the end) topped with a barely-seared piece of salmon, sauteed mushrooms and onions, and a lemony-butter sauce with fresh chives from the garden. Side of local baby greens. Perfection, and so easy and fast to make. 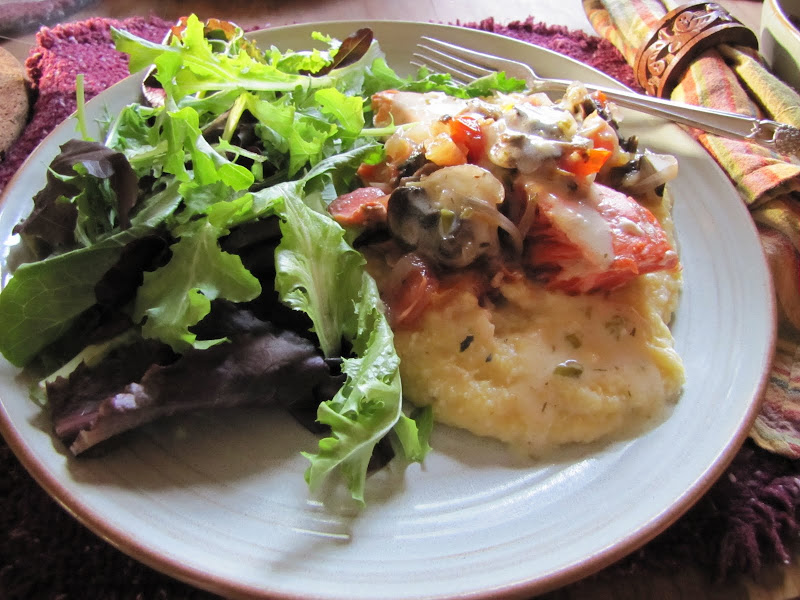