I’ve had some fun with sourdough this week. I’m finding that we don’t need two loaves of bread a week- so while the second loaf is just fine in the fridge that whole time, I think I’ll pare it down and just bake one loaf each week to keep it fresher and get some more practice in. Anyway, for those who aren’t familiar with sourdough, there’s a starter culture that you keep. It’s filled with all the good bacteria and yeast that you need to make your bread, and it looks like a really wet dough. Each week it has to be fed more flour and water to keep the little guys happy and alive. This is super easy, I just throw in equal parts of each and shake it up and put it back in the fridge. However, the starter can become pretty big after a while, especially if you aren’t baking a lot (which I don’t really except for occasional loaves of bread), and I’m still developing the starter into a good healthy one, so I often pull the whole thing out and revive it at room temperature. Many things I’ve read say to frequently toss about half of your starter to keep it all healthy. I hate to waste it! I’ve been hoping to incorporate weekly recipes for the leftover starter that I have, and I think I’ve found three distinct winners. Pancakes are one of them, although I didn’t do those this week. All you do is mix the flour and liquid parts of your pancake recipe and add some starter to the batter and let sit overnight. Then I add my other ingredients and make pancakes like normal. Delicious, and way better for your digestion than just plain old unsoaked flour. They don’t have a strong sour taste, either. Anyway, this week I was very excited because I had two definite successes in a row.

The first- sourdough pizza. It was perfect! 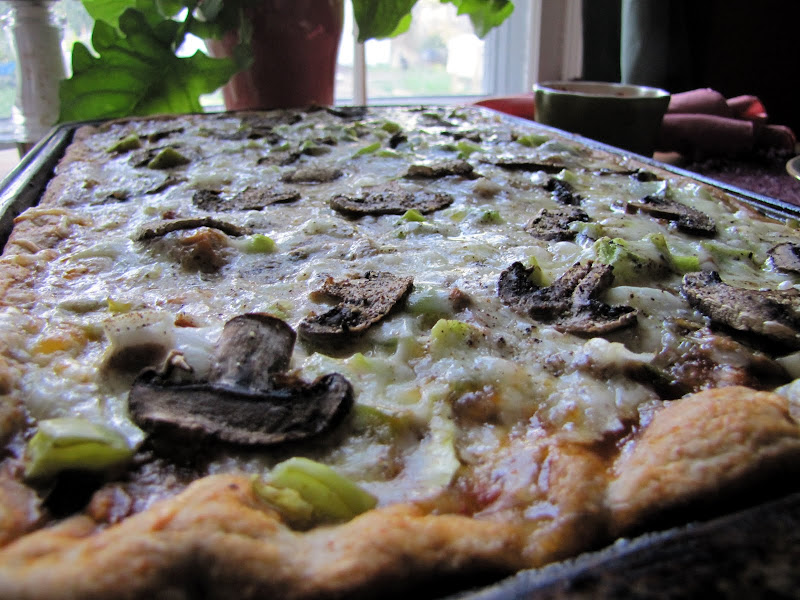 Mix ingredients to make a soft dough (if too wet add more flour, if too dry add more starter), and then refrigerate until the next day or right before use. The dough was a little sticky to work with, but I just did my best and spread it out on the pan with the help of a little extra flour. Add toppings, bake for 25 minutes or so (or until crust is brown and cheese is bubbly) at 425 F and enjoy!

I think this will definitely be a weekly recipe for us, and I plan to find a way to successfully freeze the crusts for quick meals- especially in preparation for when baby comes and we don’t have much time to cook. Plus it’s a great way to use up extra veggies and scraps from the week in a fun way. 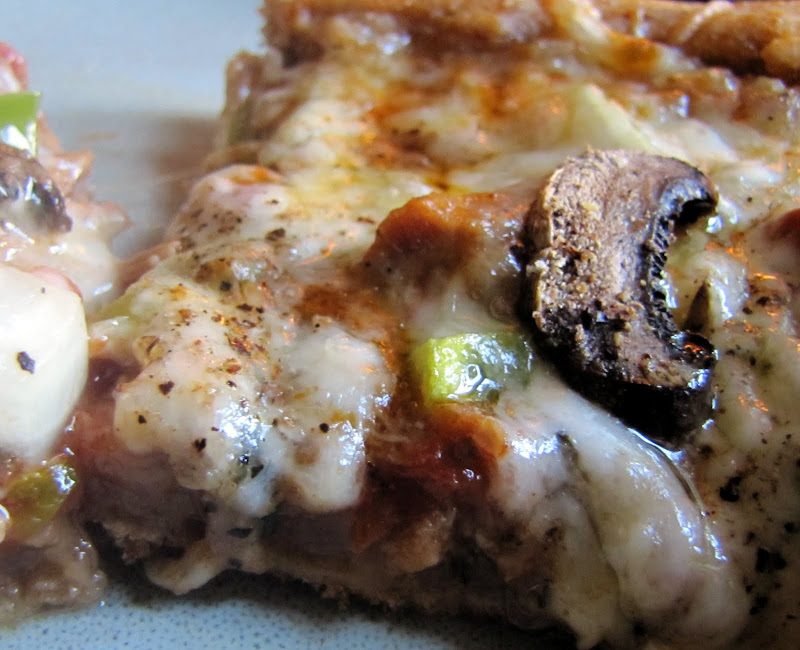 The next thing was CRACKERS! I love crackers- crackers and cheese are one of my favorite snacks. However, crackers are often full of refined flour and a bunch of mystery ingredients, and they are expensive. The other thing I worry about is that kids love them, and will often just prefer them to anything else, snack wise- I think because they ultimately feed addictions to those refined ingredients, and that does a lot of damage. Those addictions are no joke, and they can sometimes set kids up for great struggles in the future. So, we mostly go without crackers, and when we do get them it’s a treat- usually in the form of almond or rice crackers rather than wheat.

Anyway, I’ve made crackers in the past, and they weren’t nearly as good as these.

1 cup “discarded” sourdough starter
1/4 cup room temperature lard from pastured pork (or coconut oil or softened butter) *I just used butter
1 cup whole wheat or spelt flour, or as much as you need to make a stiff dough
1/2 tsp sea salt
Olive oil for brushing
Coarse salt (such as kosher salt) for sprinkling on top

Mix ingredients together (except olive oil) and let sit out for at least 7 hours. Although, I just popped mine in the refrigerator for a day or so until I was ready to use it.

This is what my dough looked like. Sticky and bubbly. 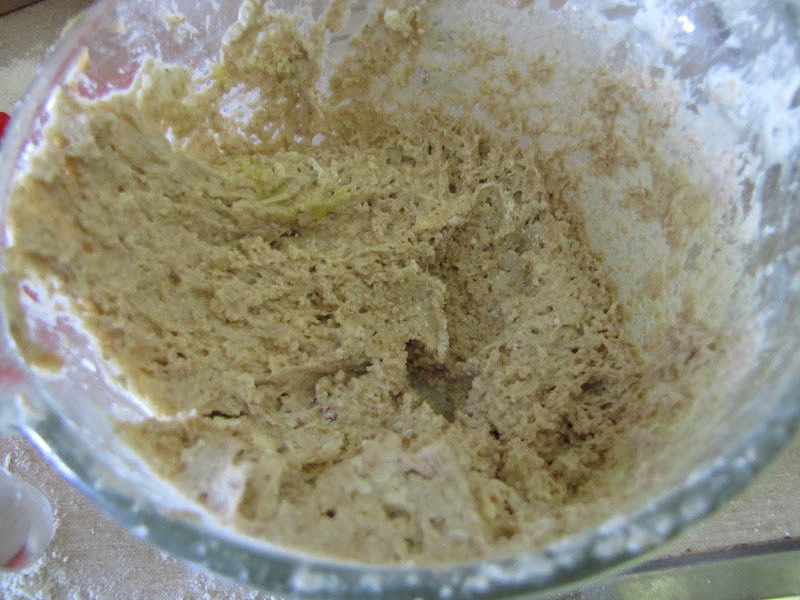 I scooped out about a 1/4 cup at a time and rolled it out as thin as I could on parchment paper (although I hope to get some of these nice baking sheets soon). It was pretty sticky, so I had to liberally sprinkle flour so that it wouldn’t stick to the rolling pin. 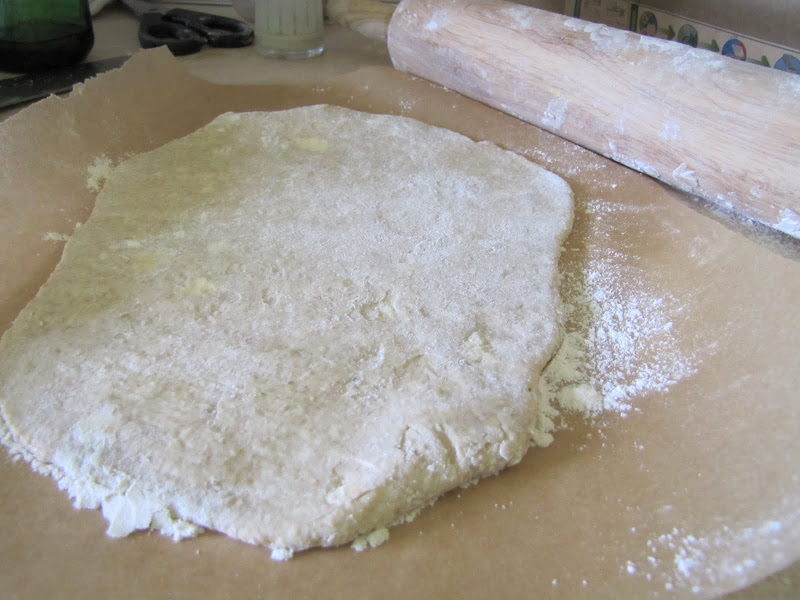 I paid careful attention to roll the dough out as evenly and thinly as possible. Then I brushed it with oil, liberally sprinkled it with sea salt, and carefully cut it into bit sized pieces. 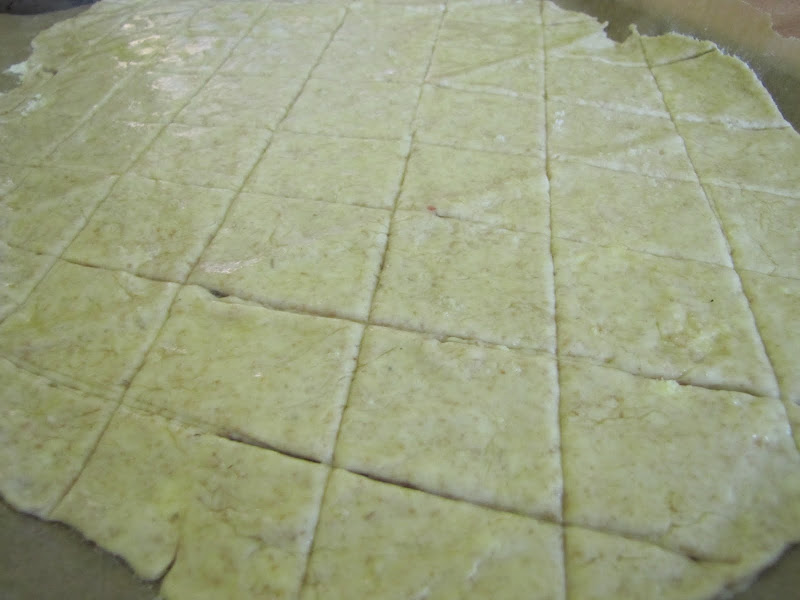 Then bake in batches at 350 F for 15-20 minutes or until brown. I had to do a few batches to get them all done. They came apart easily and were beautiful! Many of the crackers toward the center were softer than the outside pieces. I gathered up all the softer ones and combined them on a cookie sheet and stuck them in the oven with the last batch just as it was done baking. I let all of those sit in the oven while it cooled down and they crisped up perfectly. 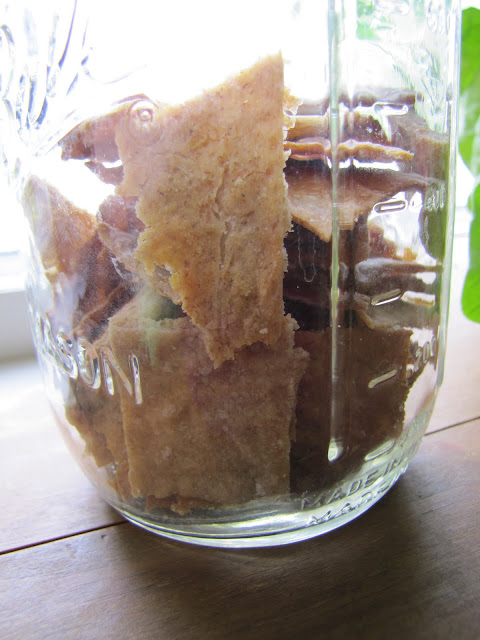 They were crunchy and so delicious! They tasted like a mix between a wheat-thin and a cheez-it. I think they tasted slightly cheesy because of the fermentation that went on. So good! Anyway, they were a huge hit and were gone in two days (two quart jars full)… and I didn’t have to feel bad at all for letting Vera crunch away on them! It was one of those things where I would have actually bought a box of these if they were for sale. Win!

I’ve been thinking about quick meals to do for when baby comes, and the crock pot is a huge lifesaver for me on busy days. This was one of my easy 10 minute meals that was really tasty. I added a can of tomatoes, a roughly chopped onion, some garlic, a beef roast, some pinto beans, salt, pepper, cumin, two whole jalapeños, and a bunch of finely chopped cilantro stems. I let that cook all day in the crock pot. Just before dinner I pulled out the roast, shredded it with a couple of forks, and returned it to the pot. Then we scooped it out onto warm corn tortillas and topped it with raw onion, a little cheese, sour cream and chopped cilantro leaves. Extremely good, and super fast. I was thinking I could easily put together little crock pot meal "kits" in the freezer that we just put in the fridge to thaw the day before, and then dump it all in the crock pot. Anyway, this meal would definitely be one of those kits. 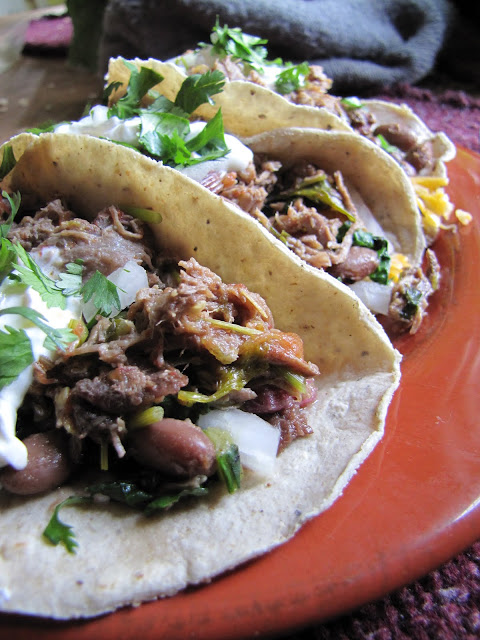