You know how I’m all about those probiotic fermented things? Well, a while back I ordered kefir grains for milk. You may have seen this stuff at the store- it’s like a more liquid yogurt that’s even more nutritious and probiotic. It’s also really good for people with lactose-intolerance because it eats up most of the lactose while it ferments. Anyway, the stuff at the store is sweetened and comes in a variety of flavors, and it’s pretty tasty, although expensive. So I got my own grains (the yeast and bacteria that culture the milk). I have to be honest, it’s just not my cup of tea. I’m sure if I stuck with it I’d have gained some kind of an appreciation for it, but I found that it was far too sour for my taste. It was just so… fermented milk. I did like it in smoothies, but that was after adding a bunch of honey or maple syrup and fruit. I just decided to stick with yogurt- I like that plain. Then I learned about water kefir. It’s the same kind of concept (just like kombucha, which I totally love), but it feeds on sugar water to produce a probiotic slightly carbonated drink- similar to a soda after fruit/juice has been added. It’s really good for you, and I was really excited to try it. Imagine… an actually healthy alternative to soda!

I ordered some water kefir grains along with my sourdough starter and sprouting kit at Cultures for Health. They came and they sat in my cupboard for a few months… then recently I decided to give it a shot.

These were the dried grains before rehydrating. 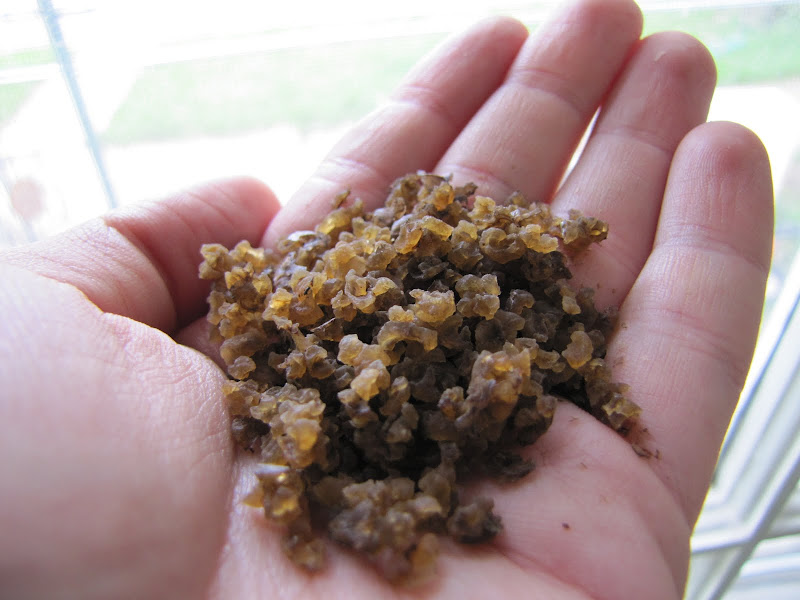 Now, this is where I really should have looked at the directions (which I lost…), because I just stuck them in some plain water to rehydrate. I guess you’re supposed to rehydrate them in sugar water for like 3-5 days. Also, the water shouldn’t just come from your tap- the chlorine can kill the culture. But I guess a Brita filter or something like that is no good either. So, from now on I’ll be boiling the water and dissolving the sugar in it and then letting it cool before adding the culture. Anyway, I just had to cross my fingers and hope that I hadn’t killed the culture! This is what they looked like after rehydrating: 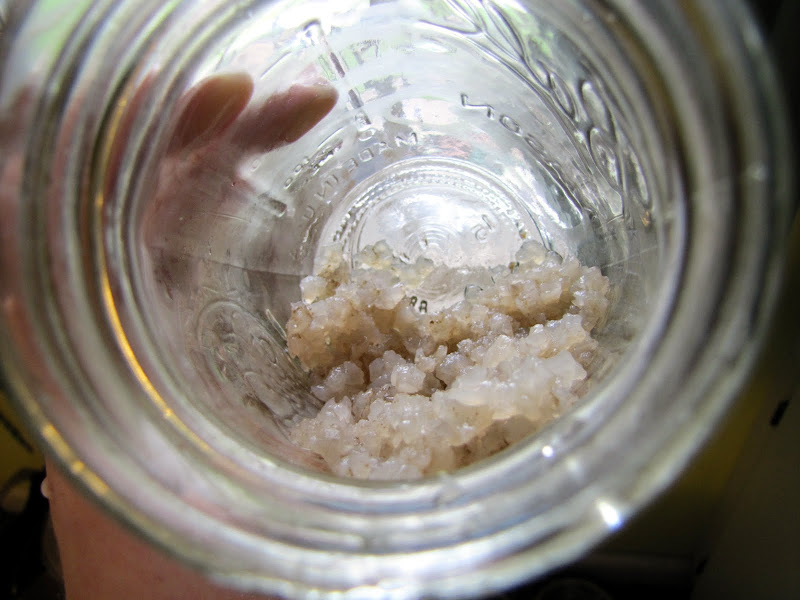 I got my supplies together. I have these two great cotton muslin bags that I can use to make the process that much easier- no straining! Plus, metal is said to be bad for the culture, and I only have metal strainers that are fine enough to work for this. So, the bags are best for me, although I’m sure I could have lined my strainer with cloth, too. 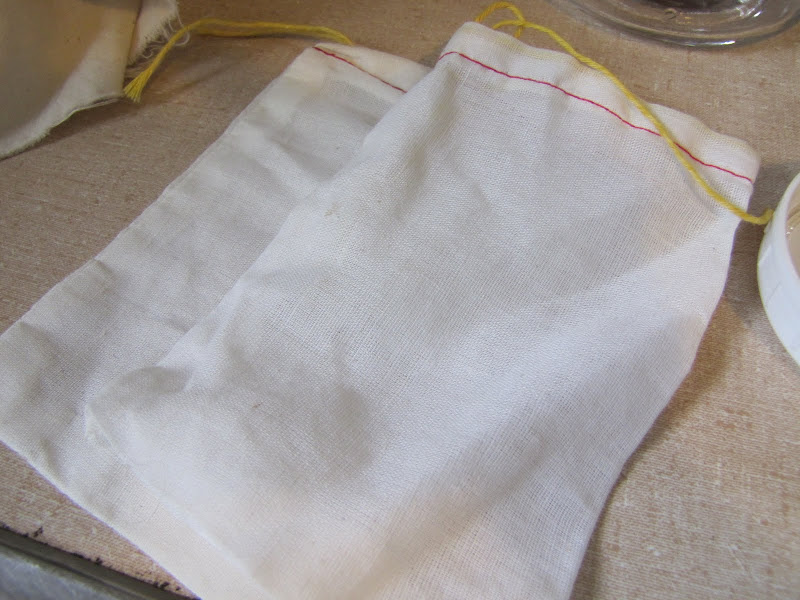 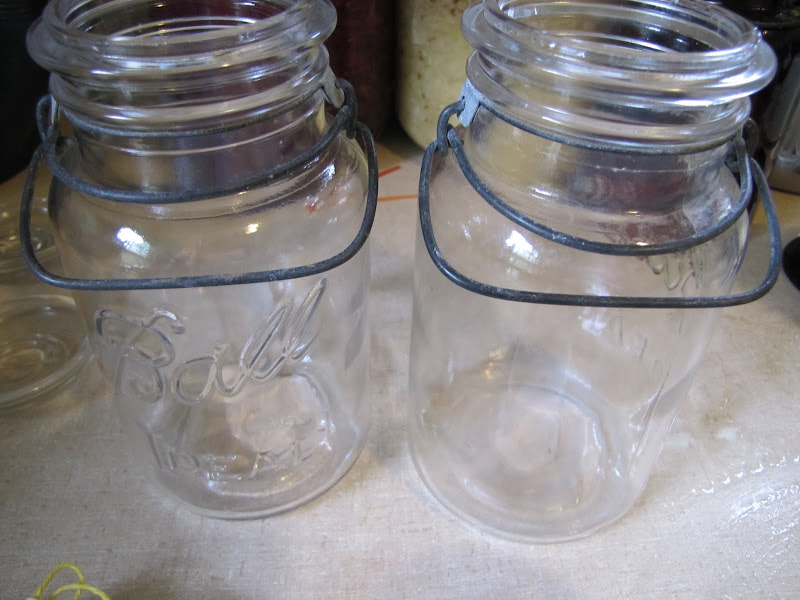 For the first fermentation-

-1/4 cup of sugar per quart (the less refined the better- the culture thrives on the minerals)
-quart jar(s)
-water
-Piece of an eggshell, washed and with membrane removed (this is also for the health of the culture, although I read you can add just a drop of blackstrap molasses, too, to add some nutrients to the water)

Bring water to a boil, stir in sugar and dissolve. Let cool, and add sugar water to jar with eggshell piece and 1-2 tablespoons of kefir grains. Cover with a cloth and leave at room temperature for 2-5 days (it sort of depends on the temperature in your kitchen- the warmer it is, the less time it will take), or until you can see some bubbles and it tastes only slightly sweet. 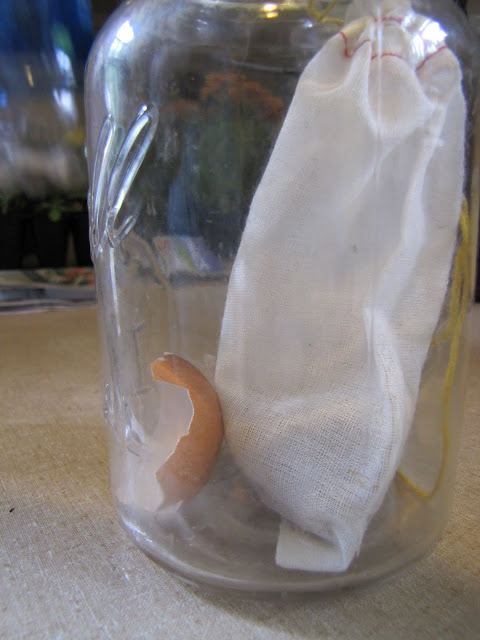 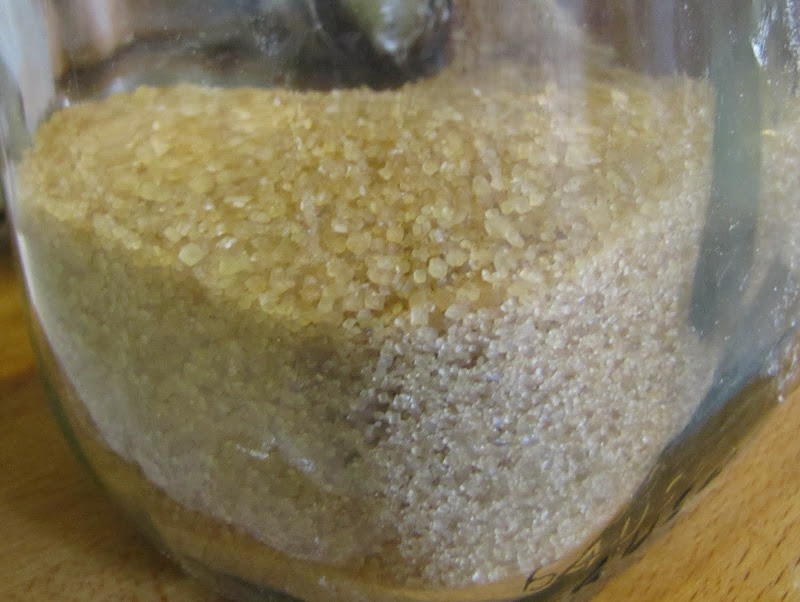 My water kefir looks kind of caramel colored because of the raw sugar that I used. 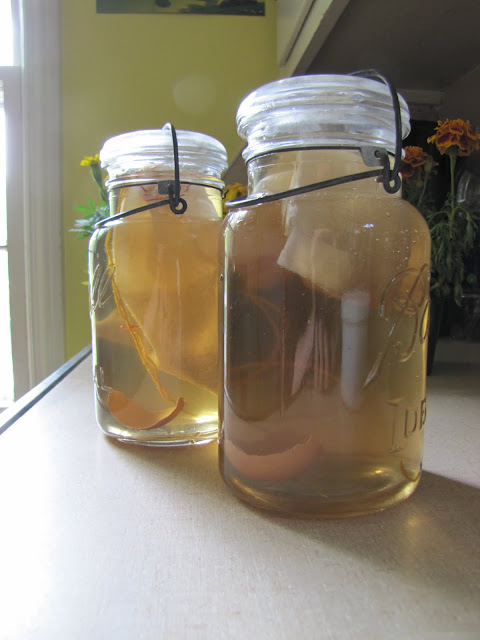 It was fun to experiment. I wasn’t sure it worked at first, because it only tasted less sweet really, with just a hint of fermented flavor… not bad at all, just not a huge transformation. You can drink it just like this, but it’s not super exciting or very carbonated at this point. So I went for the second fermentation.

Take out your eggshell and kefir grains. To this you can add any number of fruity things! A little fruit juice, a few pieces of dried/frozen/fresh fruit, a teaspoon of vanilla (cream soda!), lemon juice, etc. Experiment! This time you set the kefir and whatever you added on the counter for another 1-3 days, but this time you want to seal the jar so that no air gets in. This will help build the carbonation. Then strain and transfer to the fridge!

So far I’ve done two batches, both delicious. The first one I made two quarts- one was flavored with a couple of pieces of frozen rhubarb and the other with some frozen raspberries. So yummy! This batch was less carbonated than my second. I think it’ll take a few cycles to get the culture fully going. Anyway, the second batch I added a bit of organic frozen juice concentrate we had stashed in the freezer for forever. This batch was really yummy and pretty bubbly! Totally satisfying on these warm summer days. I think next I’ll try a lemonade one and a cream soda… mmm.

I love that these traditional, healthful recipes are making a comeback. I’m really happy to be able to offer my kiddos something that I can feel good about that is a totally delicious alternative to some of the crap out there. This is a big deal to me, not only because I want my family to be healthy, but because I really don’t want to deprive them of any joys out there, fizzy drinks included. 🙂

*Keep in mind that this beverage is like kombucha in that it does produce a small amount of alcohol in the fermentation process- but it’s generally less than 1%.
﻿

—
Oh, and in other food news, we had a really cool thing happen recently. We’ve got this great local tortilla factory that makes corn tortillas and chips. The chips are delicious, but they are fried entirely in soy oil. Soy is a controversial subject for some people- I’m pretty convinced that it’s not good for us in unfermented forms and is causing a lot of damage to people. Here’s some info about the dangers of soy. Anyway, Jeff called them and talked to a rep about the soy oil issue. They seemed genuinely interested in what he said, and I was just proud of him for making the effort. Then this morning he got a call saying that they just received a shipment of sunflower oil that they are going to test with their chips. They said if all goes well they’ll be offering an alternative product! How cool is that?