We went to this auction to get the chickens at the recommendation of our old landlord. He had chickens for years. Anyway, this auction was something else… such an interesting cross-section of people, I couldn’t help but wonder what each of their stories were. I realized that we were the only ones of our type there that I could see- a few 20-something city kids looking around like we had no idea what we were doing… and we didn’t. There wasn’t anyone there to ask, either. Everyone looked like they knew exactly what they were doing, and we just kinda did our best. There was a nice older German man who took an interest in me and talked to me for a while. He was funny, he asked me where I was going to have the baby, and when I told him I was having it at home he was so relieved. He kept saying how great that was, and how happy he was I wasn’t going to a hospital- that hospitals are for sick people and that all they do these days is treat the symptom rather than heal the person… It was really random, but he was a kindred spirit. He talked about raw milk and staying away from vaccines… funny. I didn’t get into any of it with him, he just kinda talked and talked, but I liked it and it was a unique experience- how often to I get an older foreign farmer man randomly applauding my home birth choice? haha. Another nice thing, I was feeling all sweaty and enormous and 8 months pregnant, and this woman came up to me and told me I was beautiful. I needed that, especially at this stage of the game. Lately it’s been hard for me to feel anything but cumbersome, but I’d much rather meditate on feeling beautiful and full of life. I’m working on it.

After we picked out the chickens we were going to bid on, I stood around with Jeff and our friend just people watching and trying to dodge the cigarette smoke (we left Vera with my parents, and I’m glad we did, it was a little nuts). There were lots of animals there- ducks, chickens, goats, sheep, pigeons, rabbits… I didn’t even explore the whole place, it was 90 degrees and humid, so I chose to plop in the shade instead. Anyway, we had to bid on entire cages, and each cage had 3 chickens. So we decided to bid on two and just give the extra two chickens away to our friend. We’re only allowed to have four in our city. Anyway, turns out to be a good thing we got 6 (it was only 10 bucks for all of them!), because as we were happily leaving with our new clucky friends the German man was talking about how some may be roosters… uh. He said it would be alright, just to soak the roosters in lemon juice for a day and they’d be delicious! haha. Then we asked around and found that it’s pretty hard to tell the sex of chickens at this age (we’re thinking they are about 6-8 weeks old), and we have to wait to see what they turn out to be. Great. So we’re keeping them all right now and hoping that 4 turn out to be hens. If not, we’ll just go back and get some older hens, or trade/buy from a friend who’s raising his own chicks who are around the same age. Either way, it’s a good learning experience. We’ll just watch them and listen for crowing for the next few weeks and see what we end up with. I’m also trying to identify the breeds, but that’s tricky too! There are so many. Anyway, here they are. 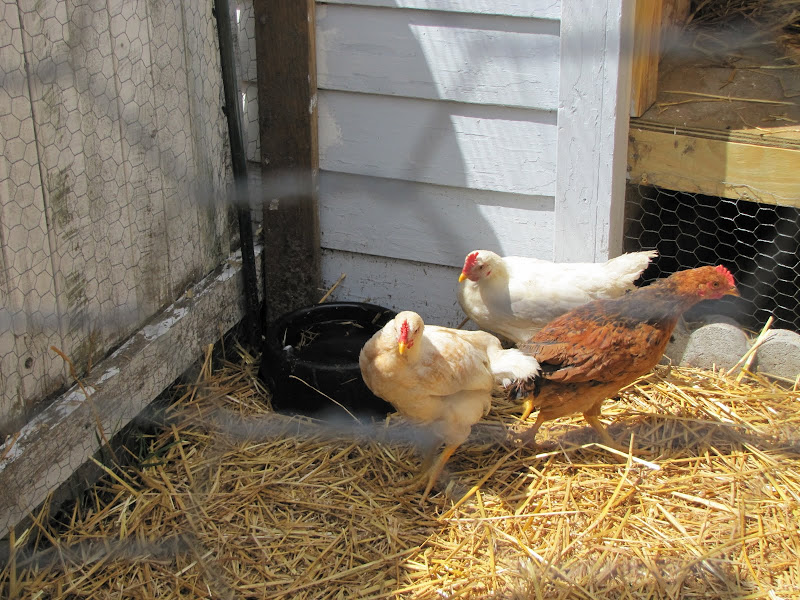 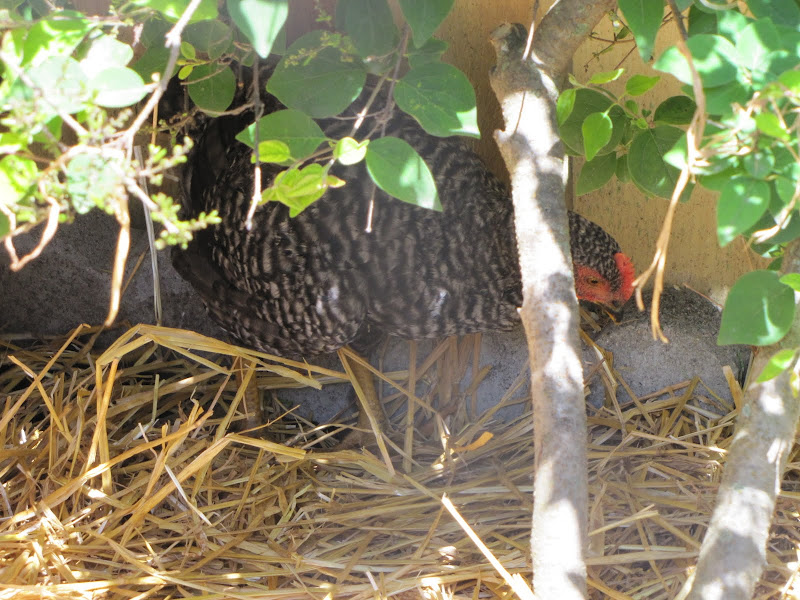 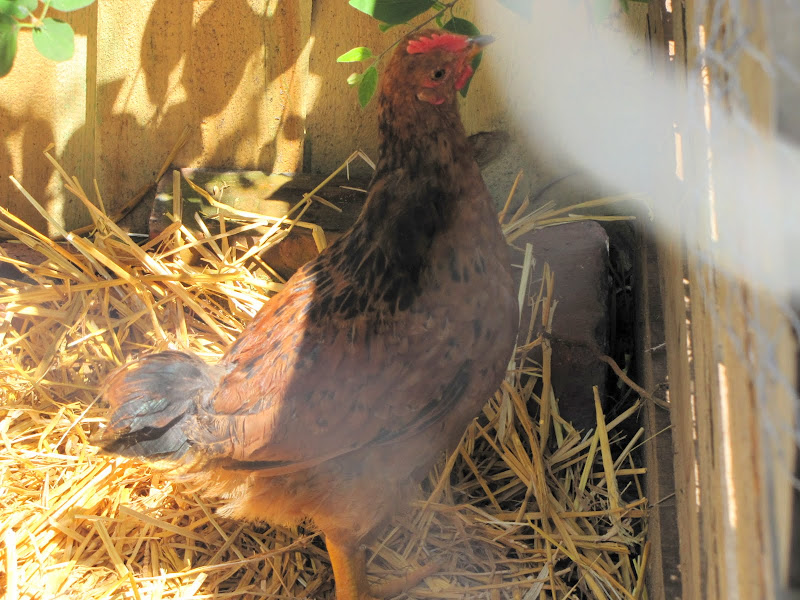 I love them! We’ve got two white ones with brown flecks, two brown ones with some black, a speckled black and white one, and a black one that I forgot to get a picture of. So far I know that they love strawberry tops and millet. Vera is fascinated with them, but the one who’s really over the moon is Maya. Oh boy. She’s obsessed. I think she’s just genuinely intrigued and desperately wants to check them out.

This was her the first day: 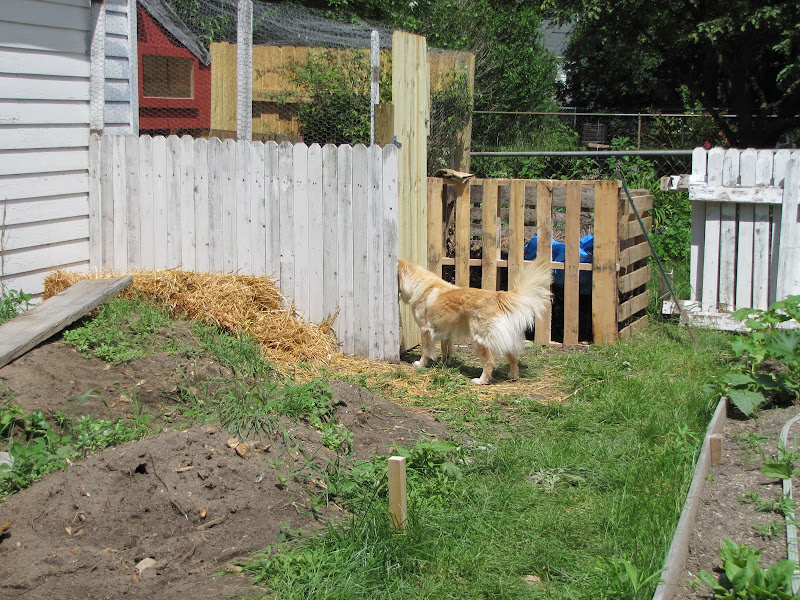 And here she is this morning: 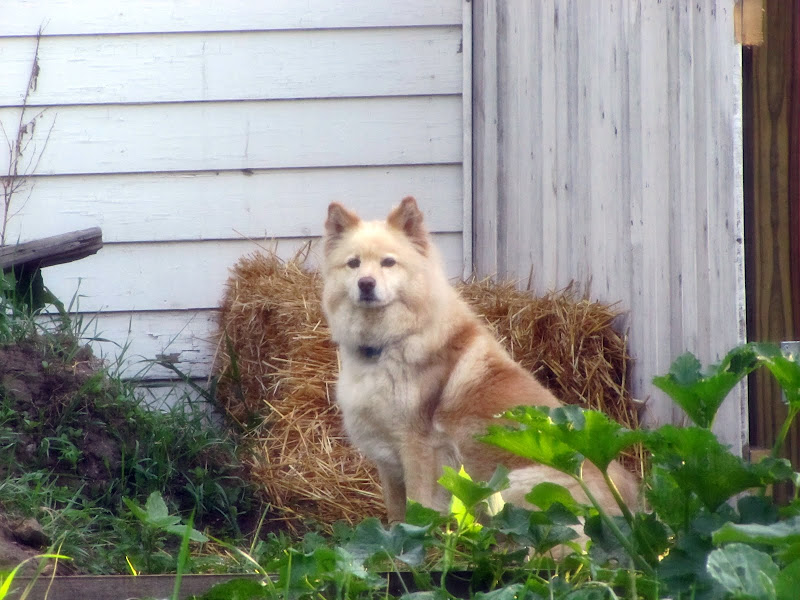 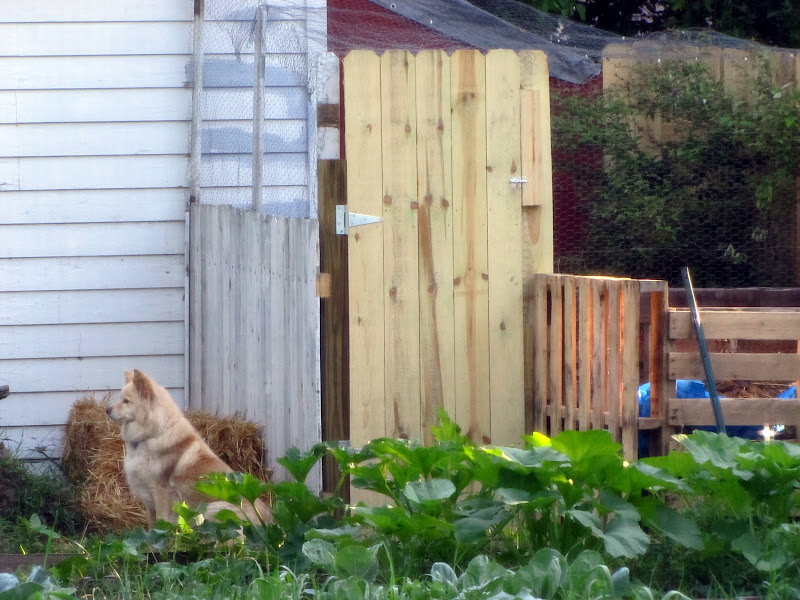 Standing guard. I love it.

Anyway, this weekend was very productive, but we didn’t even start on mulch. Jeff got most of the trellises up, but we’ve got to finish those in the next couple of days. Things are getting big! Today I’m going to try to get the house sort of organized and crack down on projects. My goal is not to burn out, but to just stay really organized to get ready for this baby. I’m planning on spending an hour every morning getting the house cleaned up while I still have energy (by evening I’m pretty much useless and I just want to hang out and lounge). Then each day I’m going to spend an hour on a project. I figure that will keep me focused but not overwhelmed, and it will add up quickly. Today I’m going to organize my thoughts and order things based on priority. This way I still have plenty of time each day for hanging out with friends, spending fun time with Vera, relaxing, doing cooking things, spending time on the garden, etc.

I’ve also got some fun crafty things in the works, which I think I’ll start working on in the evenings when I’ve got less energy. I’m going to make Vera a big sister doll to give to her on baby’s birth day. I’m also gearing up to do a big painting for my living room… it’s been ages since I painted, but I have a concept and I’m excited to do it. Besides, if it turns out to be crap I can just paint right over it and start again. I’ve also got some sewing to do. I’ve got to make more cloth wipes (which is going great, btw, I don’t know why we didn’t do it sooner), make some postpartum pads out of old prefolds, and I’m hoping to bust out an easy quilt for using outside. I basically want to spend the rest of the summer lounging on a blanket with a sleeping baby and some iced tea while Vera splashes in her pool (which she calls her "puddle")… that’s my peaceful vision anyway.

Quote of the day:
"I realized that if I had to choose, I’d rather have birds than airplanes." (Charles Lindbergh)