One week has gone by since my last post, and it’s hard to believe how much has changed in that time. This whole kit-house thing has been amazing in that regard. So much of the guess work and the head scratching (although I won’t say there hasn’t been any…) has been removed from the process, and so things are moving fast and smoothly. The team at the kit company have been receiving our calls and fixing anything necessary, and we are super duper impressed with them. A whopping good review for them. I want to actually offer them one in writing when this process is finished, along with pictures and whatnot. It’s also so fun to know that we designed this place, it’s just kind of the best of both worlds. Anyway, here’s the progress since I last checked in:

Patrick went home to Austin early last Saturday, so Friday was their last day out there. Those two guys, I tell ya. It was obvious to me they’d been friends since they were kids. I’d pop my head in when I could, between kids and market and house and food makings, and they’d be there, working and laughing and generally impressing me. Long 12-hour days, they worked. We were sad to see him go, but super grateful for the time with him. Jeff and I talked about how it’s these kinds of experiences that can solidify long-term friendships. I mean, it just feels like we’ll stay connected with him for a long time to come, and that there will always be a slice of his good energy in this house. 🙂

I’m back at market now. It felt like a pretty short break, probably because we were so occupied the whole time, and the fact that I still had to maintain farm stuff regardless of market. It’s been great, though, to hear all the comments at market about how missed we were! I guess I know that people like us, but those comments have been validating and encouraging. This crazy year is worth it, I’m feeling more and more sure of it.

Ducks are being born out at the farm. Cuteness.

A friend came over with her chicken the other day. I miss having chickens. I miss all that life and fun work surrounding me. Soon enough. Lindsay took this picture of me and the kids and it struck me as just the kind of fuzzy old picture we’ll all look back on, lamenting the passage of time and commenting on how young everyone is. I don’t know why I felt that way about this one in particular, I’m sure we could do that with any picture. Something about Vera’s hair and how she’s growing into herself more, and Asa’s silly grin and tousled little-boy hair, and me with my babies still young and nestled around me with a chicken in our laps.

We were “behind” out at the farm, whatever that means. My grip on how this farming thing is supposed to look/go is loosening each year. Each year sees me less and less sure that I know the right way to do this, each year brings new challenges, but I think that’s what happens in any maturing relationship in this life. The longer you live the less you know? Something like that. Now we just keep chipping away and stay grateful for what’s coming along well. I do find that I have to take care not to get trapped in a sort of unfulfilling intellectual space- a space that fails to translate well into the physical world when there is a lot to be done and resources are lacking. This has been a small theme in my days lately. Maybe I can expand on this when I’ve thought more about it, but I guess the best way I can explain it is by relating it to what I do when my housework feels too overwhelming. I look at my house, it’s a mess and I feel alone, and while I’m tempted to sit and make lists and struggle to develop a magical system of some kind so this problem will never sneak up on me again (not a bad plan, ultimately), what I actually need to do is just *move* and get the job done. So I started doing what I call “10-minute rooms” in those situations. I set a timer, and move from room to room, only doing what I can and not getting caught up in thought. I don’t remember if I learned this from someone or just made it up, but it’s a staple in my maintain-personal-sanity cupboard. By the time I’m done, my house is almost always pretty clean and I’ve spent about 1 hour doing it. Thinking too much about it, specifically when it threatens to take the place of that movement, doesn’t help me.

This same philosophy really applies to my life in general right now. I’m not sure that I can get mentally on top of it, and lately I’m not sure that it’s all that important that I do. I just need to move. In most of the things we’re working on I think they require about 10-20% thought and 80-90% action. Oftentimes the necessary thoughts/ideas/insight I need even come about through the action of the work. This gives me some perspective about how things need to get done. Sorry if that’s a confusing thought, it’s just one that’s been knocking around in my head lately. It’s about working from the outside-in rather than the inside-out. I’ve always felt that route proved more effective for me, personally.

Back to the house. Next came the loft joists. This is where Patrick left us, right before Jeff went back to work after his 2 week break.

Below you can see all the piles of dirt around the house. We got the inspection we needed to be able to back fill, and so Jeff started work on moving those piles towards the house.

The site feels a lot safer now without those huge gaps between the concrete walls and the ground. I have found that I’m a lot more paranoid about the kids coming around the work site lately. They run and don’t listen well enough, and there just… aren’t any walls on the thing! Yikes! It’s mostly the south side I feel nervous about, the basement walls are 10 ft tall! Anyway, as Milton said to me today I’m “such a mom”…

I swear, every time Jeff and I get a chance to be out there just the two of us, we are just shy of giddy. I mean, look at us- just a couple of silly kids, and look at that amazing house-thingy behind us, and then all the trees, and the creek, and the walk-ability to my favorite town ever, and I just… I can’t even.

Next came the tie beams in the living room and the stairs up to the loft.

More friends came to help with this part. The community support has been really wonderful, it’s just meant so much. We have been getting offers left and right, just good hardworking people who want to help. <3

Tie beams up. I think they’ll be really beautiful beneath the big gabled ceiling.

My future kitchen window on the left, and the door to the future deck off of the living room. 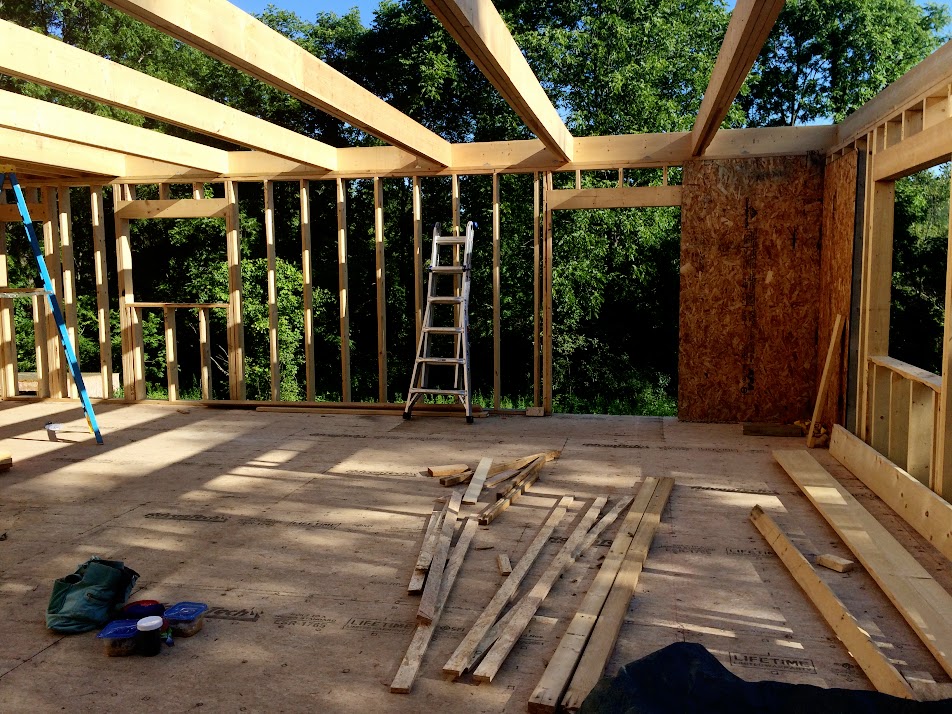 Below, the stairs to the loft, and a hallway to the bedrooms behind them.

Big west windows off of the living room.

This south wall will get sliced up into rooms soon enough. Left to right, a bedroom window, bathroom window, and kitchen window.

Below, Jeff and his old friend Matt work on the loft floor sheathing.

View from on top of the loft, where Jeff and I will sleep.

On this day I helped with clean up around the site. There are loose nails and screws and pieces of wood, so we’re trying to keep a really clean operation so we don’t have a lot of dangerous stuff to be wary of when we move in. I got there and Jeff and Matt were busy sheathing, but they informed me that the excavator had been there earlier in the day and had excavated the driveway! So I took a quick walk to check it out. It’s quite a thing. 600ft of beautiful winding road. We still have a lot of work to do on it, but at least we’ve got a good path now! Above you can see the start of it from our house site, it’s the dirt path that veers off to the right of our cars, just to the left of the tarped wood on the ground there.

There’s a lot of wood being generated by this project, but I have lots of ideas for how to repurpose it. From simple firewood to lining all our garden beds and paths, hugelkultur beds, posts for outbuildings and greenhouses, etc. 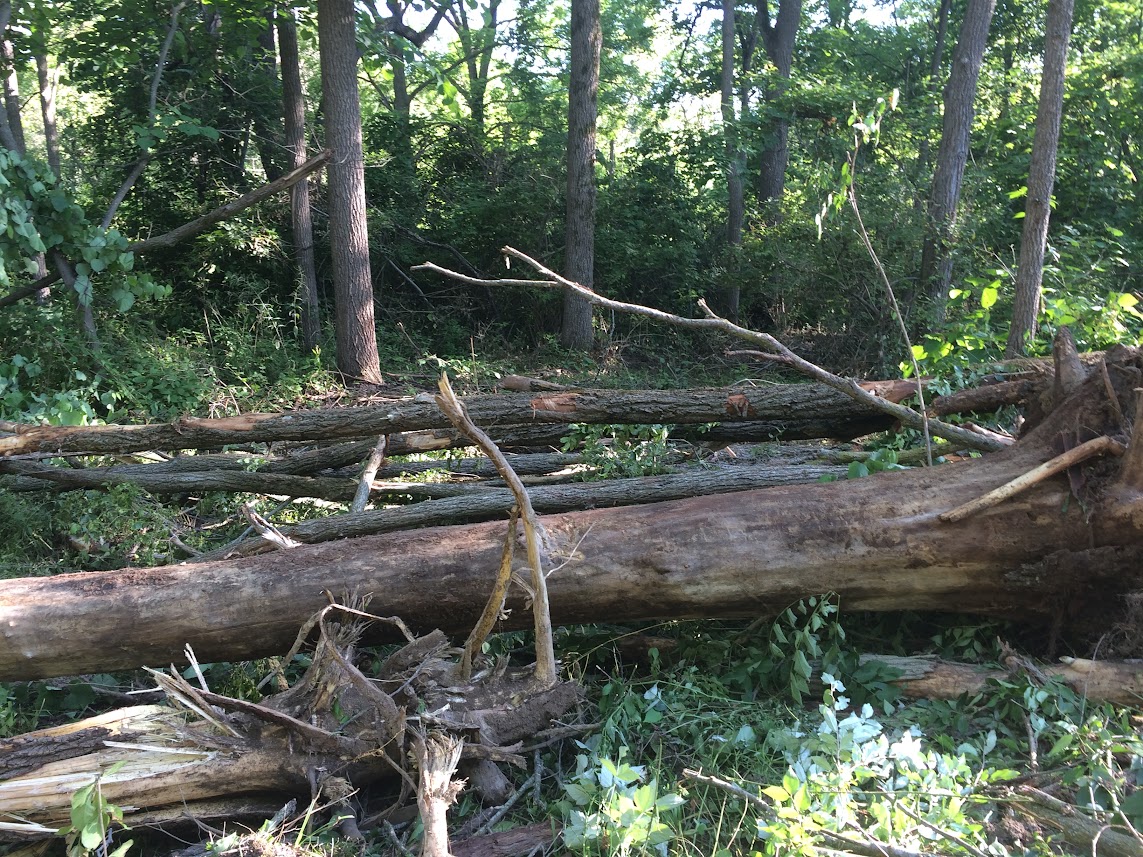 The road is just at the top of the hill in the photo below.

The boys finished the sheathing and I finished clean up. Matt left and I couldn’t help but lay down in the middle of the place and stare up at the blue sky.

Jeff and I climbed up to our loft to have a picnic dinner, and we just gazed out over the landscape. It’s like we’re in a giant tree house.