Just before leaving to work on the house today, Jeff indulged me with a quick cup of coffee together in the living room. He’s a guzzler, I’m a slow-sipper. I could tell the whole time we sat that he was thinking about the house and his list of to-dos for the day. His knee was bouncing up and down like it does, eyes darting to and fro while he clearly strained to be still and listen to my thoughts about some article I’d read. In years past I would have taken that whole scene personally, but I know that’s not it. It’s not personal at all.

I did feel a twinge of disappointment that he wasn’t able to relax enough to hang out with me for the 10 minutes we had. He’ll likely be gone until after I put the kids to bed tonight, and this way of life we’ve got going on is a bit of an emotional and mental strain. But we are close. I know him well enough now to know that his sitting there with me when he was itching to go was an act of love. And his continued enthusiasm for this enormous undertaking is nothing short of a gift. I won’t begrudge him his focus or passion or energy for this. I understand that it is exactly what we need now, even if it does leave me feeling like I’m talking to a bit of a wall from time to time. When he got up to leave I said “Thanks for building us a house, my love.” and he replied “Thank you for making us a home.” I mean, shoot… That man.

You know, I still can’t quite believe I’m going to live in this place soon. It’s a little surreal. I mean, obviously that’s *why* we’re doing it, but I realized recently that Jeff and I have largely been in the moment with this project. I look at it all with pride and love and excitement for the future, but my physical world just doesn’t line up with it just yet. Maybe it’s a defense mechanism? An event this stressful and trying probably beckons you to stay in the moment. I know we are so close, but I don’t really feel sure of what that means. Time is weird, change is funny, perception is fickle. I also suffer from impostor syndrome to some degree, so that makes things interesting, like… When will they find out that we’re just a couple of crazies? We get to do this thing? For real? I felt similarly when we took Maya home from the Humane Society. She sat so perfect in my lap and all I could think was “They are really going to let us take her home?!”

Since the last house update, there have been lots of not-so-photographable things- ducting isn’t that easy to translate, you’ve got to just see it in person. But, Jeff finished all the rough duct work! And, of course, I had to smother the seams of the ducts with a very caulk-like substance… my favorite, as mentioned in a previous post. Oh, and to fill all the small holes between floors with fire-proof caulk. And there is still more caulking to do outside. Who knew when we started building a house there would be such a need for goop? I’m sure there is some kind of zen return for that work, I’m trying to lean into that possibility while I shmear goopy substances into tiny crevices from the top of a ladder. I try to tune into its universal wisdom when it ends up on my elbow, despite all the paper towel preparations and careful distribution.

Anyway, on to the general house update. The past few weeks have been focused on utilities. Electric was finished and we were kind of nervous about the inspection since, you know, we aren’t electricians. We did have an electrician come and consult, which was a good idea. Thankfully, we passed the inspection! For as much of a hassle some of these inspections are, the electric was one that we were pretty thankful for! You mean we did this one right? Excellent!

Then we failed our rough mechanical and framing inspection (the first fail!), but for little details like the need for more caulk (go figure) and an adjustment of the stairwell up to the loft. I’ll go into that in more detail later, but we knew we could fix everything easily. Then they came out again and we passed everything, and got the go-ahead to start insulating! 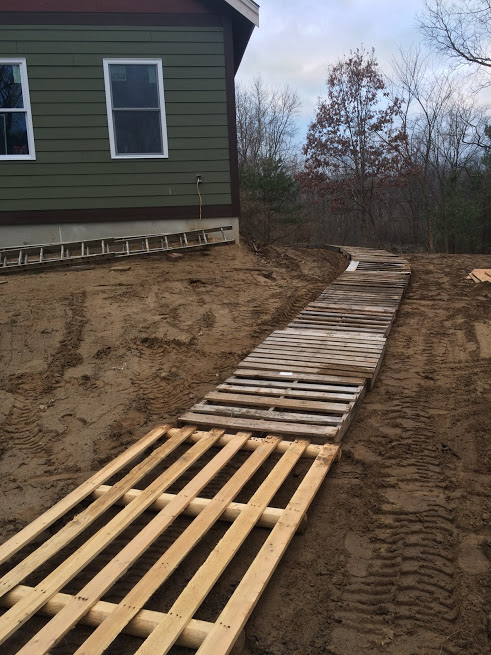 We put together a walkway to help us get to the house through the muddy seasons, especially while we have no grass yet! Pallets and plywood, you can never have too much!

Ross and Katy gifted us with some crushed asphalt to finish up our driveway! It was a total surprise, but they’d sneaky-like talked to our driveway guy. We have such amazing friends! Now we have a finished drive with a parking lot area, which will eventually get prettied up into a proper turn around. 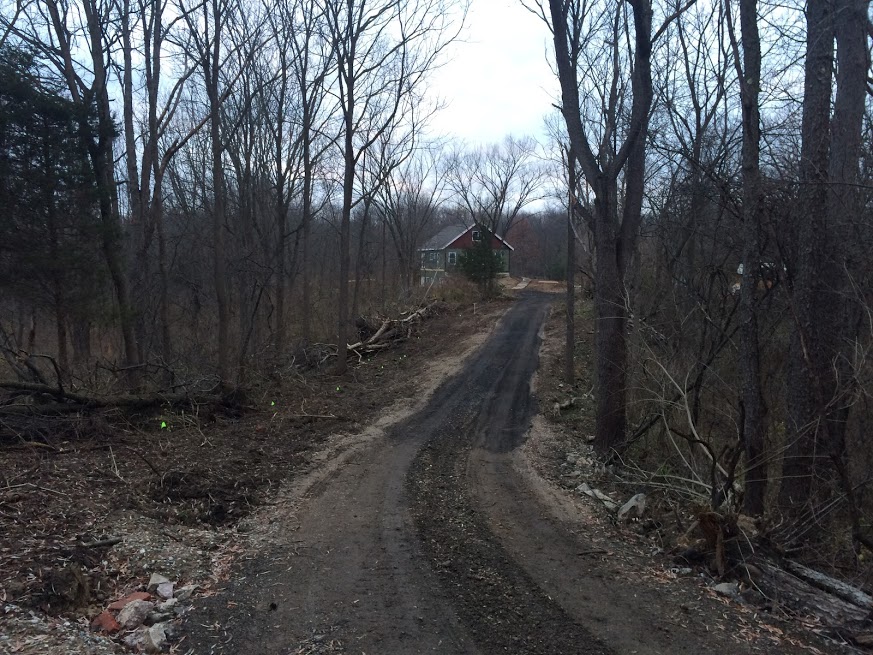 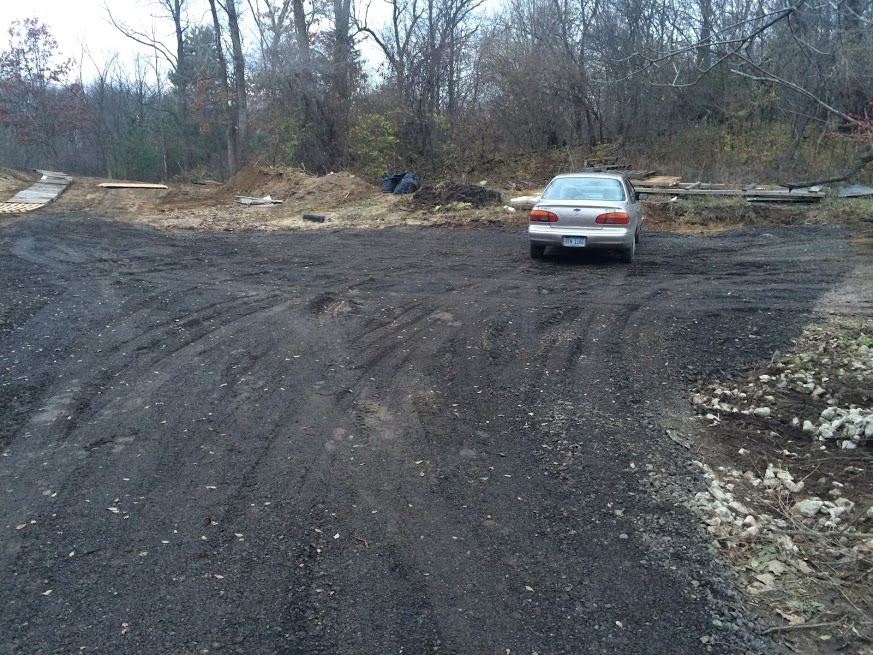 We got our propane tank installed too! We decided to go with propane for a variety of reasons, but one of them is that we have the potential to convert it to run on animal waste! We’ll see, but we liked the idea of a closed loop system eventually. 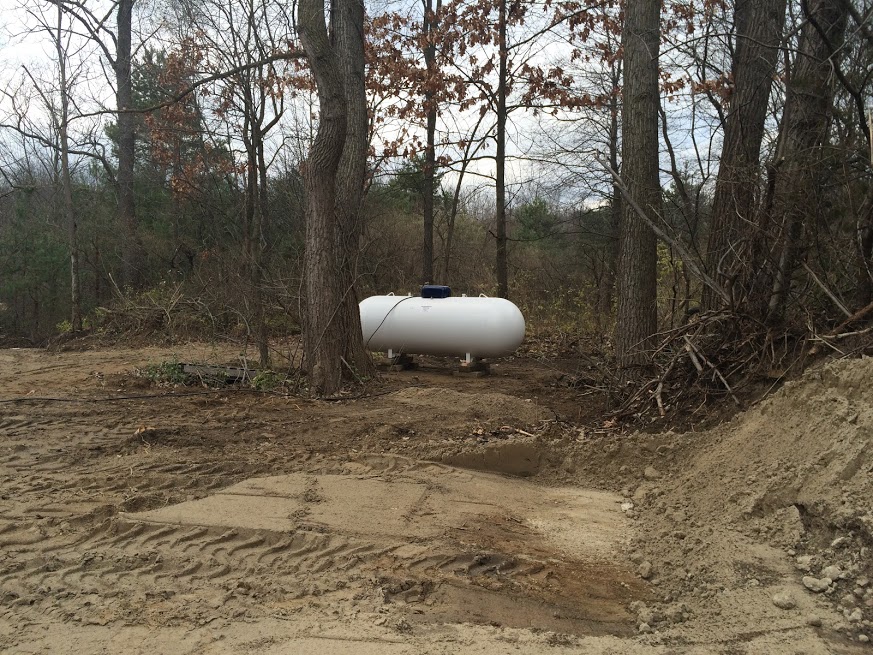 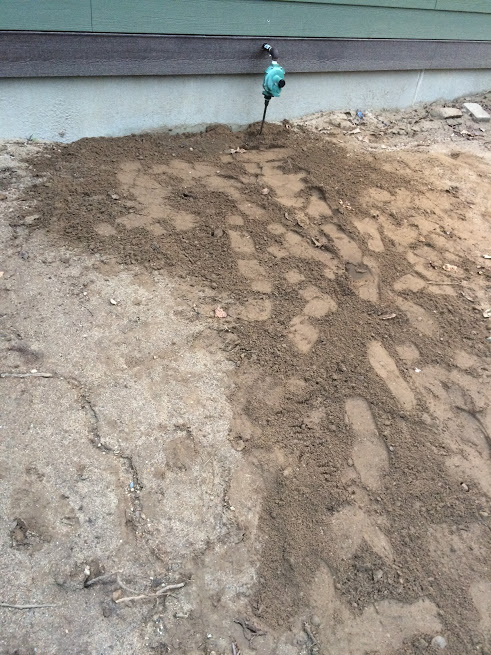 The septic field got installed as well. 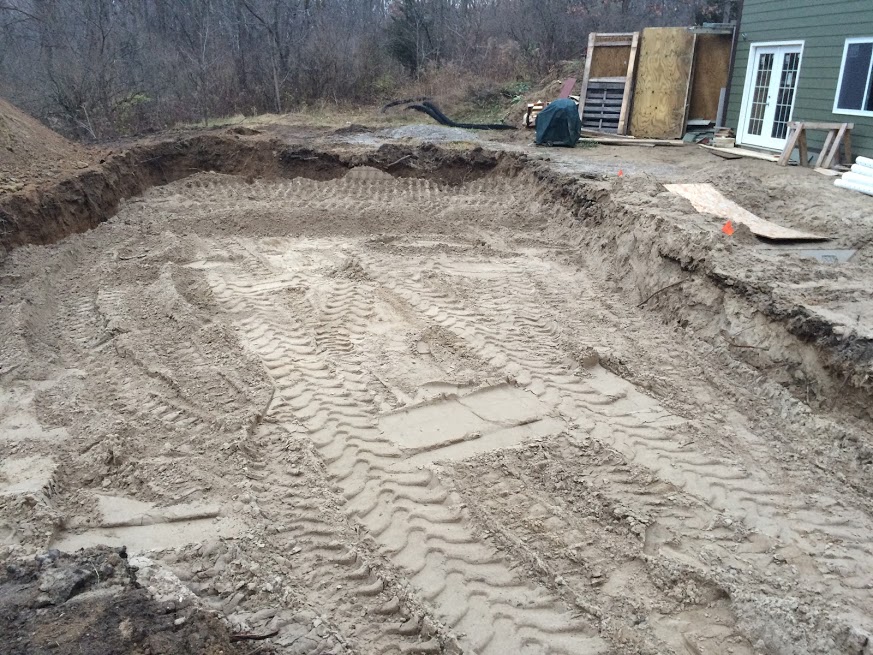 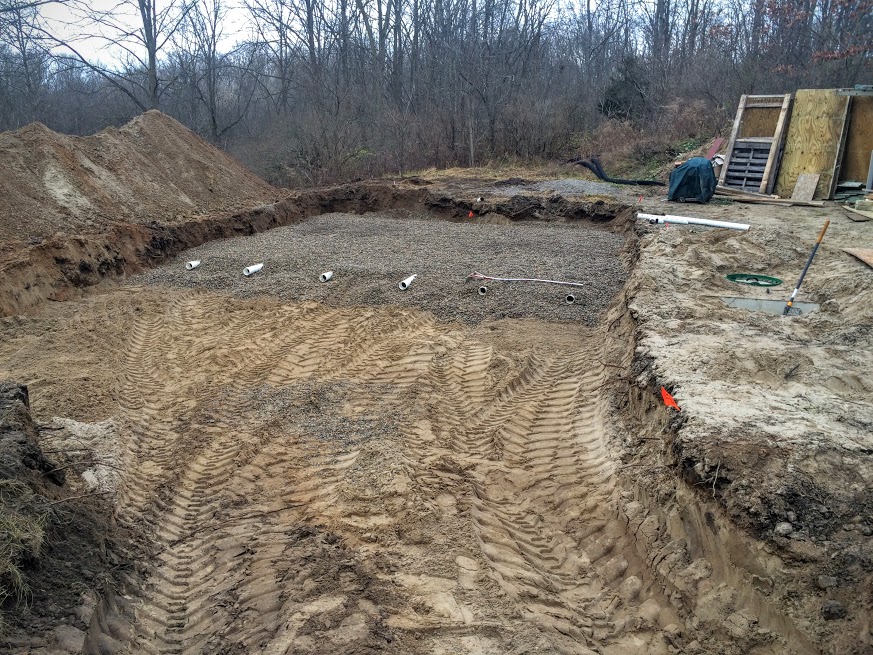 Finished! Now we are envisioning a nice big yard for the kids to play. 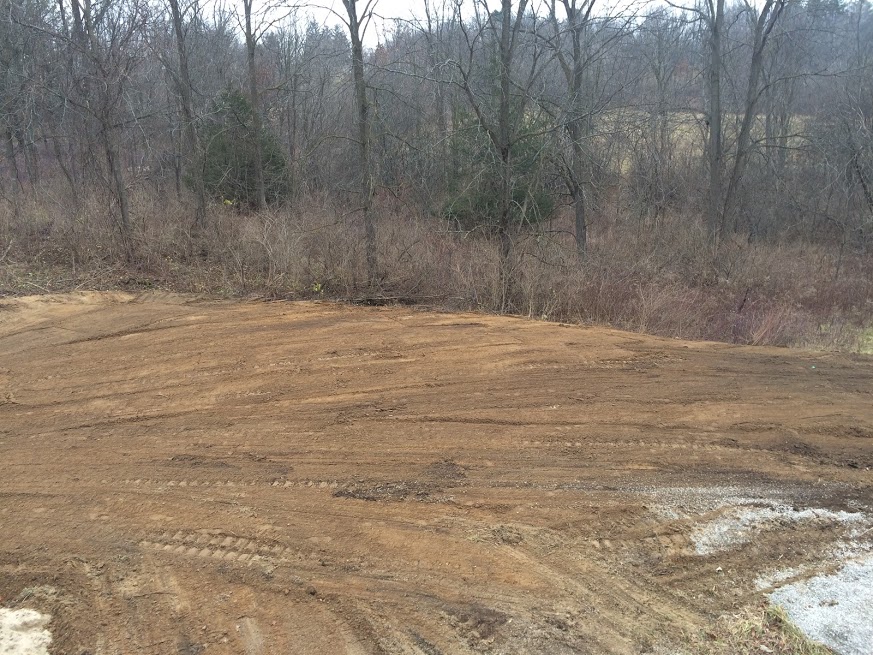 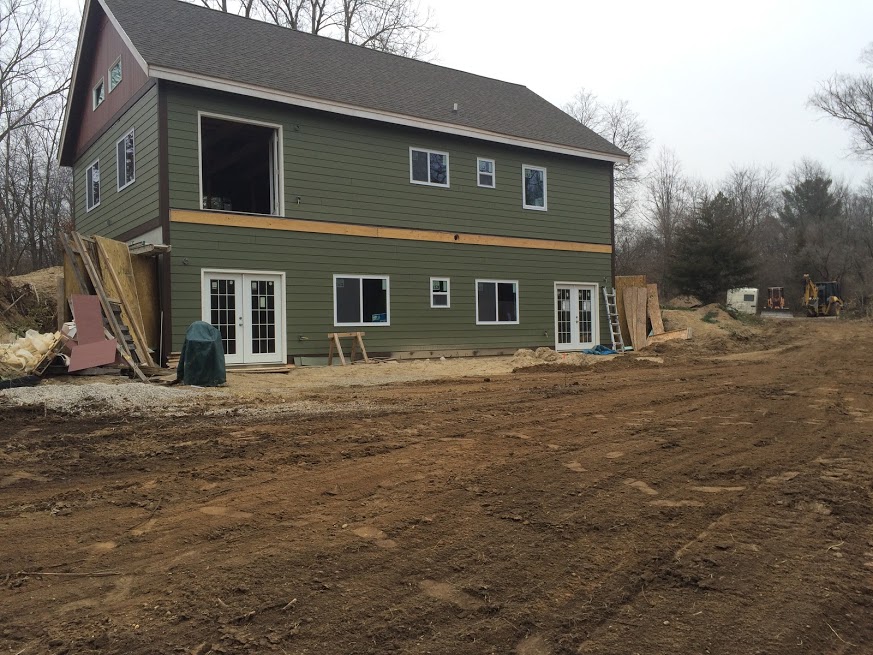 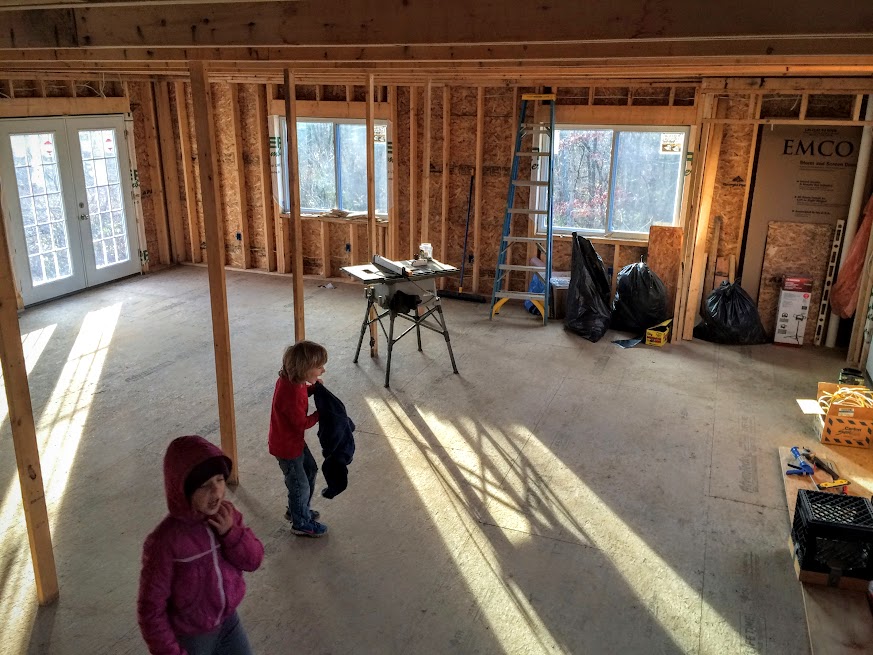 Closer and closer. This evening when I brought food out to Jeff and his friend, they had done so much! The following two pictures were taken a few days ago. The first is the prep done for mounting the tub. The second is the massive amounts of insulation that Jeff moved all through the house, just waiting for the go-ahead from the inspector. 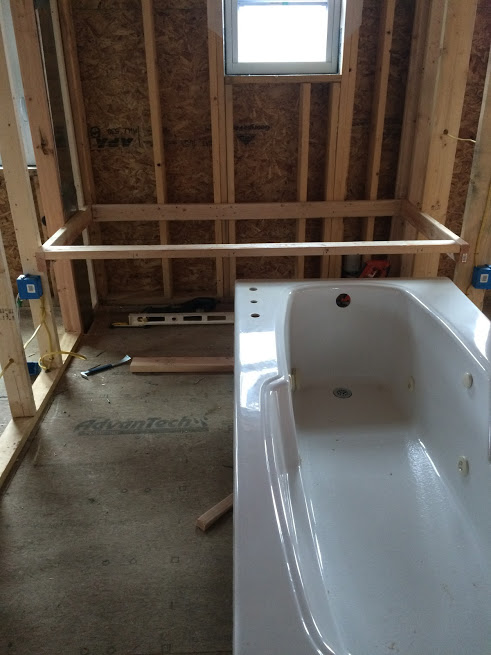 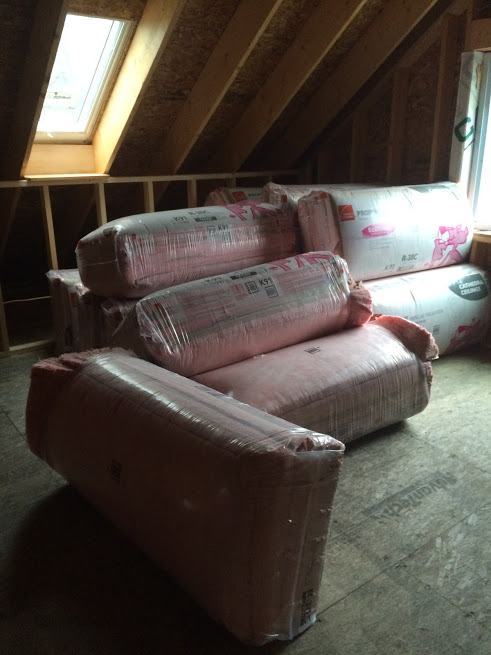 So tonight I showed up and saw that they had mounted the tub and done lots of work insulating, the loft was almost done! 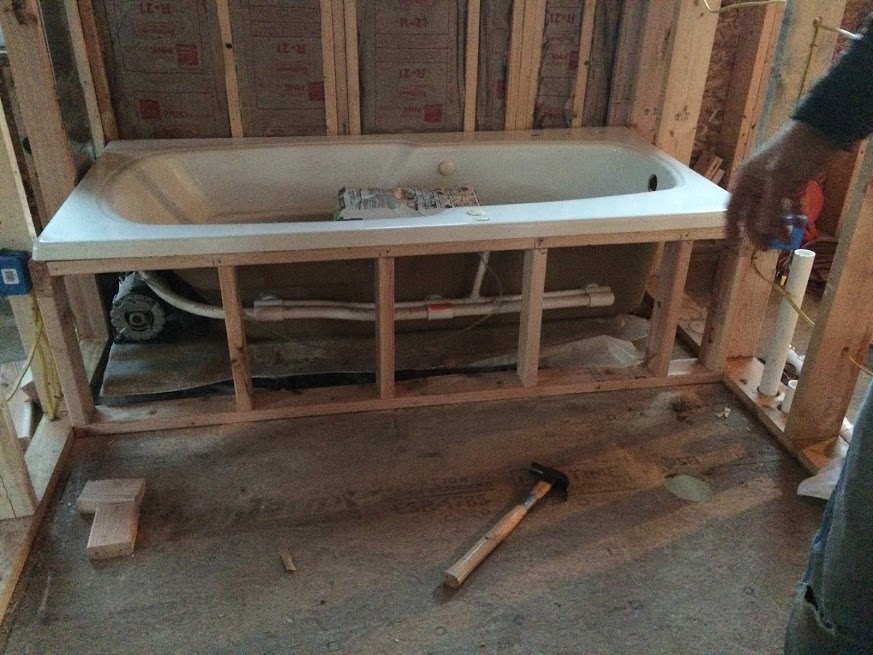 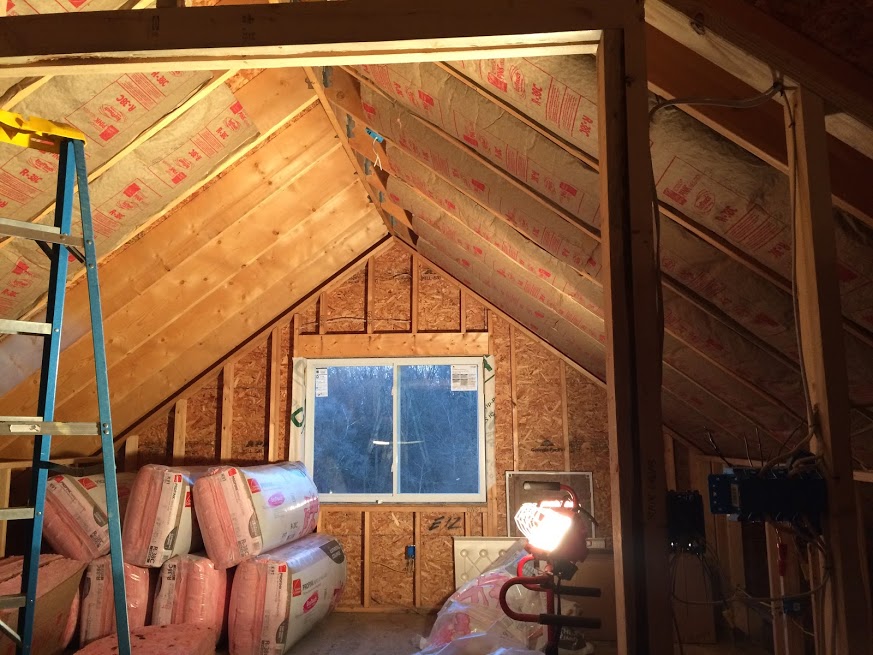 So that’s where we are. Next comes plumbing. Nestled in between all of this has been the rest of life. Food, farming, kids, new wiggly teeth, dog and guinea pigs and house guests and laundry. I have finally felt like it’s time to come up with a preliminary homestead plan (which is bound to change around, as these things do). It has been hugely gratifying for me to do. I’ll do a whole post about it soon. Until then, other recent pictures of life around here. 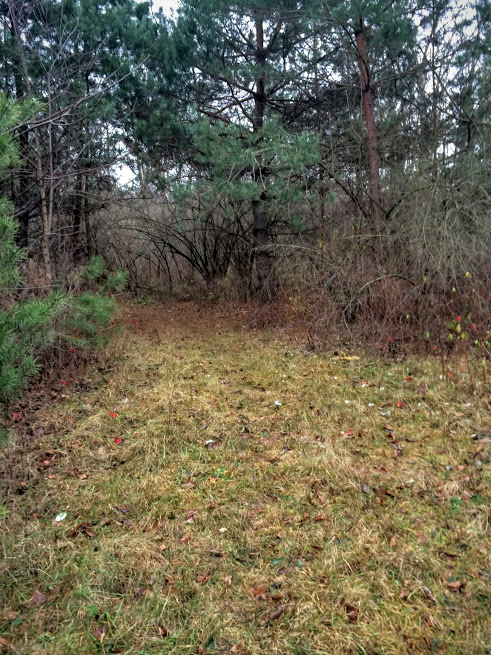 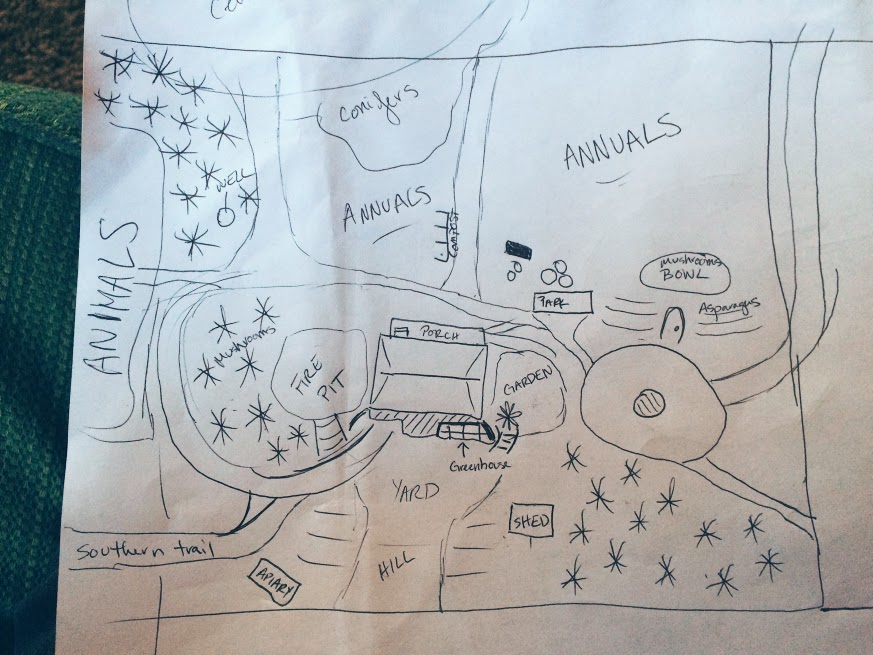 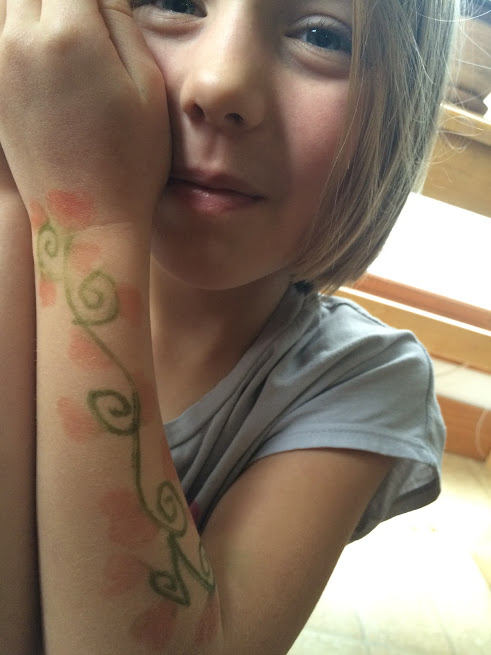 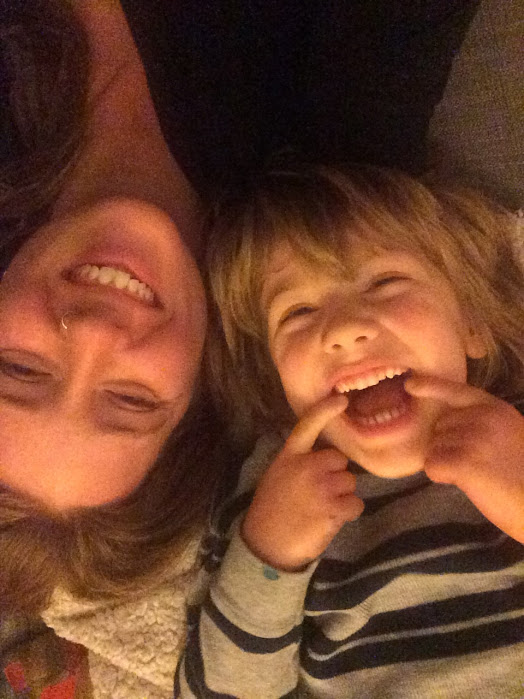 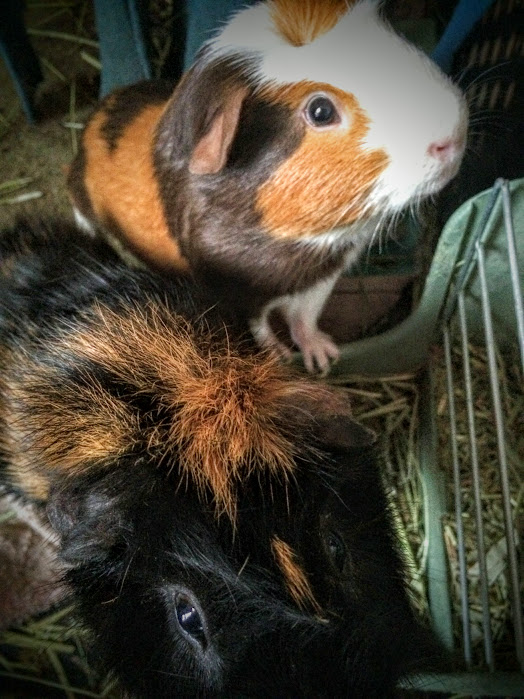 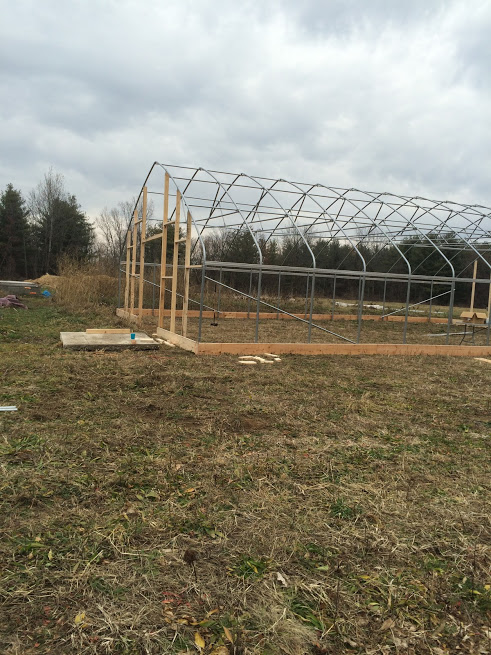 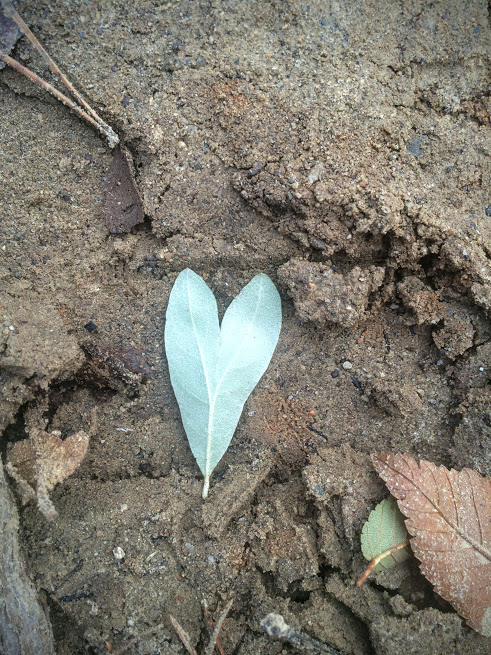