At my parents house they have this kid-sized circus tent. Somehow it became a habit for Jeff to slide the thing over his head and run around after the kids, sucking them up into it and spitting them out. For those of you who don't know Jeff, he's 6'4", a fact that just adds to the ridiculousness of this game. The whole thing is so funny to me, I almost pee my pants every time he does it.

The little wooded area of the yard is a safe zone.

He also will suddenly leap and then collapse to the ground, pulling his entire body inside and laying there perfectly still for a while.

This brings on attacks from the kids. They usually whack the tent with sticks at this point.

Then, just as suddenly, the tent monster will spring to life, and the children shriek and run away while he blindly runs after them.

You can't really see it here, but he's sucked up Asa into the tent.

And here he's spit him back out onto the ground. 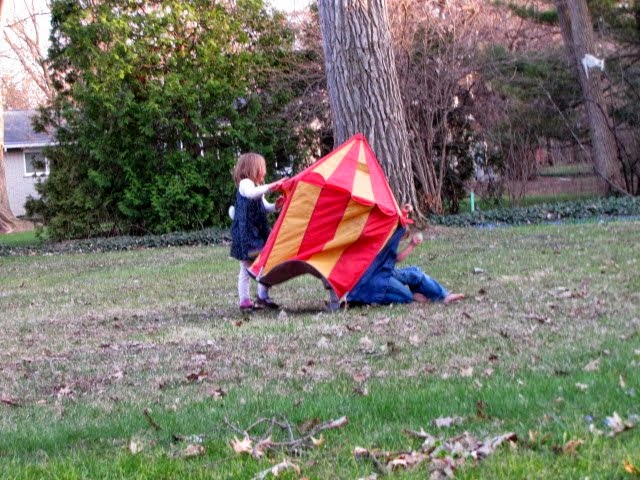 The reasons that I love this man are too numerous to count. His ability to make me laugh until I'm wiping away tears is definitely one of them.