Here’s where we get really, really crunchy on you. Be prepared.

When we had Vera and thought about how to diaper her, it was an easy choice. People have been diapering their babies with cloth for… well, I don’t even know. A really long time. People started using disposables, but it really has only been a matter of a few decades since that’s been the norm. Cloth diapers now are so user friendly- I’ve never used a safety pin to fasten one. If you want them to be, they can be just about as easy as disposables (little colorful all-in-one diapers that have a waterproof layer all sewn into the diaper itself). Washing is really nothing to complain about, I find. It’s not as easy as throwing it in the trash, but it’s a small price to pay to not contribute to the needless destruction that is caused by disposables. A few facts:

So there’s all that, and I likely missed a bunch. But I also have to mention that cloth diapers are way cuter, and they save us boat-loads of money (barring the initial investment, but you can cloth diaper your baby for very little if you wanted). What’s not to love?

Anyway, that was a no-brainer for us. We started out using disposable wipes, though, and quickly realized that it was just as silly to use those when we could use cloth wipes and just throw them in the wash with the diapers. Then, we started thinking about how we use paper wipes too. We realized that we should be using cloth wipes as well, and had resolved to do it over a year ago, but we just took forever to get around to it. The other day we ran out of toilet paper and we talked about it again. We had this pile of cloth wipes upstairs all cut and ready to stitch up the raw edges, and it just hasn’t happened…
When I was working this thing out in my head (the summer after V was born), I was pretty self-conscious about it. I got looks, I got some pretty surprising criticism about being unsanitary, and it was just intimidating. I’m sure that’s part of why we stalled so long on putting it into action. Today, I don’t feel that way about it. I’m sure I’ll still feel self-conscious when I talk to some people about it, I don’t like to think that people are judging us or think we’re gross. At the same time, it just doesn’t matter what they think ultimately. What we do at this point is about more important things than how people perceive us. Just a few toilet paper facts:

"One of the most commonly used type of tree can produce around 1,000 rolls of toilet paper. Given that Americans use an average of 23.6 rolls per person per year, let’s do some rough number crunching:

now divide that by 1,000 (what each tree can produce in rolls)

Even if you should take out the "hybrid" brands that contain some percentage of recycled content, this would still amount to millions of trees."

"Whether it’s plantation timber or not, this represents millions of trees that could be cleaning up carbon dioxide, not sh..! Then there’s all the other very important functions that trees perform in our ecosystem. At the very least these trees could be put to far better use in more semi-permanent applications such as furniture or building materials.

Buying toilet paper made from recycled materials is great but even this can present some challenges.

Recycled paper needs to be deinked before it is pulped and processed. This deinking process may involve chlorine to bleach the paper. Chlorine based chemicals can react with paper fibers to create toxic compounds such as dioxin and organochlorines.

Dioxins cause cancer, learning disorders, decreased immune response, diabetes and all sorts of other nasty problems in the environment. By the way, the same chlorine issue is prevalent when using virgin-fiber based toilet tissue too."

Plus, I look at the trend in cloth diapering and how much more normal it’s getting, and I just wonder if we’re just on the cusp of another trend with cloth wipes. I can’t really be concerned with how other people feel about it right now, because I know that it’s the right thing for us to do as a family. Jeff is so all about it that he wants us to get rid of all toilet paper in the house so that even visitors have to use the wipes. For now, I don’t feel as militant about it. I am keeping a roll on the back of the toilet in case we have a visitor who is uncomfortable with it. We’re on our fourth day with cloth wipes, and it’s seriously no big deal. I don’t know why we waited so long. Here’s our set up:

Basket of cloth wipes on the floor next to the toilet (I may have to elevate them on a stool for when Vera is using the big potty, which will be very soon!). They are made out of either flannel or terry cloth. Soon this basket will be pretty full most of the time, but we’re still in the process of sewing up all the edges. 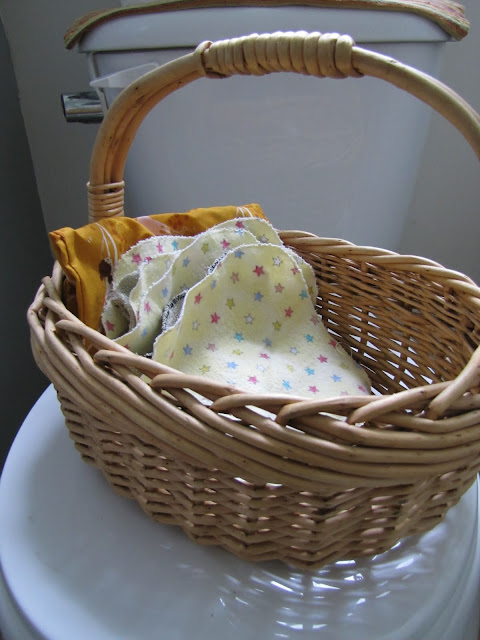 I had planned to make waterproof bags (much like the ones I use for Vera’s diapers) to hold the wipes, but I just never got around to it. When Jeff and I decided it was time, we commissioned my friend   to make me some custom wet bags that would hang from the toilet paper holder. She did an awesome job, and they turned out so so well. Don’t you think? She’s very talented and has other items (cloth menstrual pads, wet bags, reusable grocery bags, etc.)  for sale at C-Pop Commodities. Anyway, I’m really happy I asked her to help me. 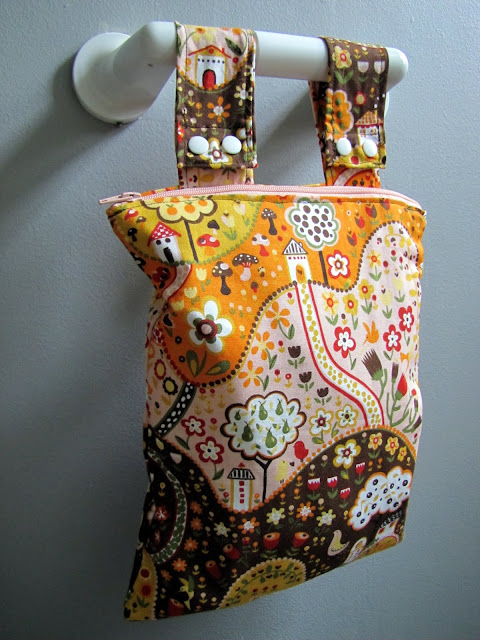 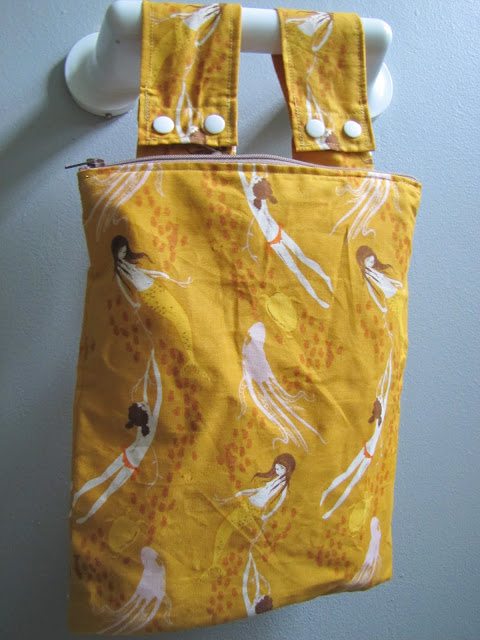 So yeah, they snap over the (former) toilet paper holder, and have a waterproof lining on the inside. Perfect! We’ll just switch them out as each batch gets washed. Anyway, from only four days on this cloth wipe thing, I have no complaints. I only use one wipe each time, and it actually seems to be cleaner than paper (and I don’t have to use excess paper just to create a barrier to keep my hand clean). Another advantage is that it gives us the opportunity to get cleaner than we did with tp- if we feel like this might be a doozy, we can just wet a wipe at the sink before we take a seat… We’ve also yet to throw a wipe in the toilet, which I thought would happen a lot at first.

—
My main reflection is this- we’ve become really out of touch with what is really "clean" and what is really "dirty". So many people scramble around working to create the squeakiest of clean houses- when in reality that kind of living just isn’t that good for you or your immune system. So many of the products in modern households (shampoo, soaps, detergents, etc.) are far more toxic for us than the dirt and grime they are combating. The fact is, the use of many of these disposable products creates a very dangerous world for us (and all our non-human neighbors) to live in. From production to disposal, these products are only creating the illusion of cleanliness and ease. Some may think it’s too much to ask that each of us deal with our own individual waste, but personally I don’t want the job of cleaning up the mess that it is creating- and I don’t wish to give that mess to anyone else. We’ve all outsourced this stuff- and made the whole process more toxic and wasteful to boot.