Skip to content
I write this all down with the full expectation that… well, that not everything will go as I expect it to. Such is life, I’ve made my peace. But scheming and planning is half of the fun, I think. Drawing out these plans in my mind each year, kind of like putting a lump of wet clay on a potter’s wheel. You don’t know what will happen when that wheel starts to spin, but it’s good to start out with a vision. At the end of the year I can see my influence, the influence of others, the influence of the weather and timing and all that we can’t control or anticipate. It’s exciting, isn’t it? Anyway. I was finally able to have some of that vision for my own little homestead yesterday. A cool and sunny day in which to gather my thoughts about the coming year. I wanted to document those thoughts here, for a beginning of the season look at everything. A "before".
Here’s Vera’s little house outside. Jeff threw it together with the remnants of those potato boxes we had. We’ll still be doing potato towers, but I think we’ll be doing them with wire this time… Anyway, Here it is, almost finished. I decided that Vera should have a garden of her own, and she was delighted. So yesterday we went out and made this little raised bed on the side. She planted up a package of wildflowers that we had saved for her from last year. I think it’s completely adorable. 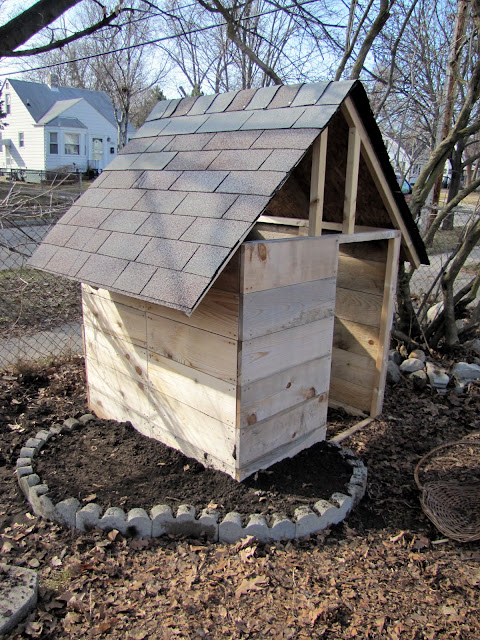 Jeff and I decided that it’s important that we create a lot of designated play spaces for the kids, because they just won’t have the open expanse of yard that many kids enjoy. We’re going to landscape most of it, so with the exception of a patch of grass by the back of the house, there won’t be a great deal of grassy running space. I figure we’ll just save that for the park every day. And of course, they will be able to run around on the paths we create. But, carving out a lot of usable space for them is an important item on my list. So. Play house with garden. Check.

He was just a delicious little chunky bundle the whole time we were out there. 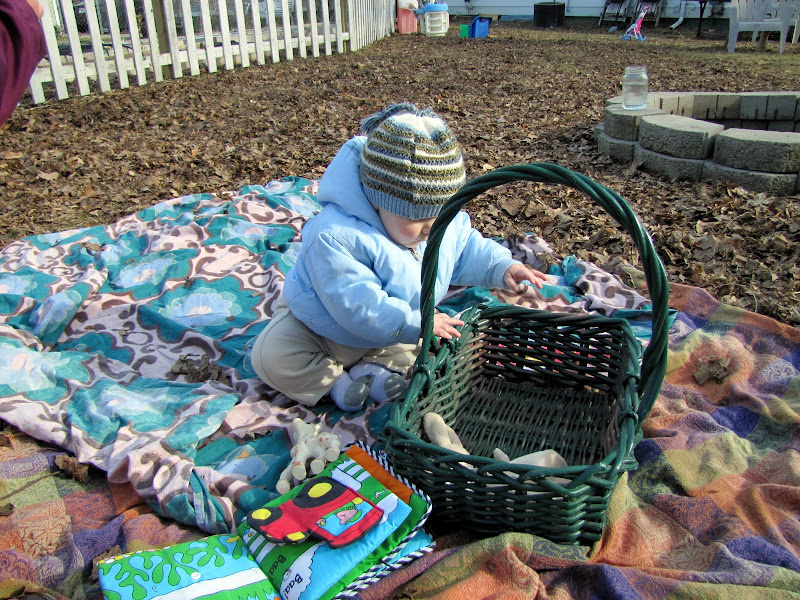 So, standing at the back of the house, going around from the east around to the south.

East side of the yard. We’ve got the clothes line and beginning of the vegetable garden. This will stay largely the same, although I do plan to plant something perennial right by the fence… possibly raspberries. 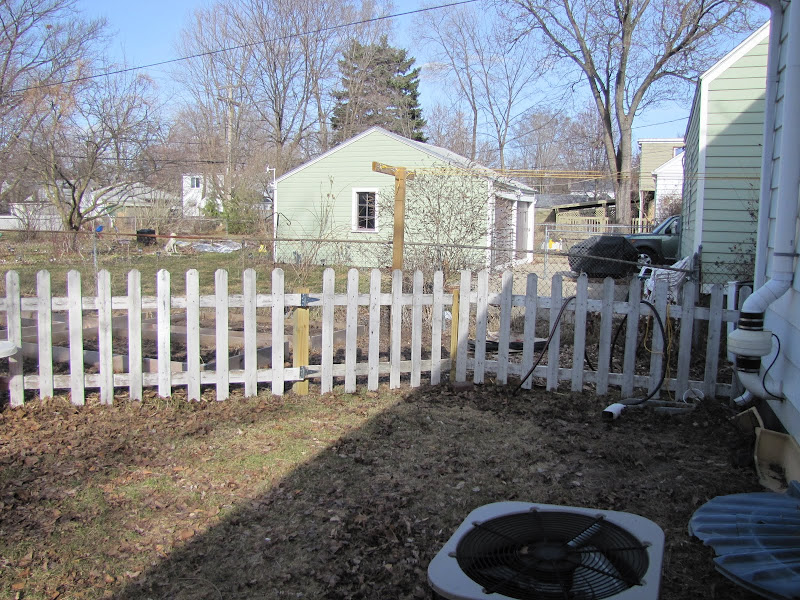 Again, just a massive amount of veggies. I want to plant some of the area by the fence with various perennials, although I haven’t decided what yet. I’m thinking some currants. This is where we’ll leave some grass to grow- by the back of the house, somewhat shady and close to windows so I can check on the kids. 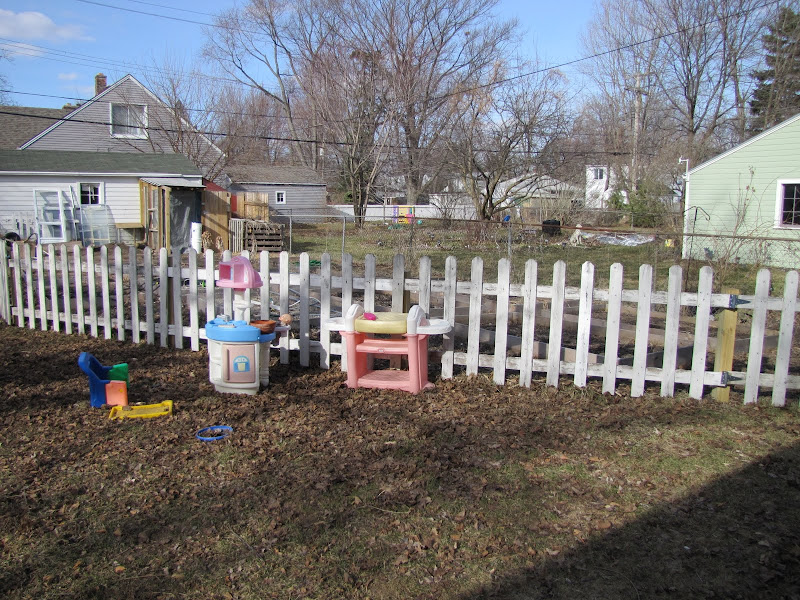 The whole yard. I’m disassembling the perennial bed that I planted along the west side of the yard, because it was just silly. Too shady, and it’s right next to the wisteria- which I now know is an invasive, and is sending up rhizomes all over that area. So, those pavers will move around the yard to define plant beds. The biggest thing that I’ll do is define the pathways, and that will help tremendously. That way I can start mapping out and planning what else to plant, seeing what kind of light each bed gets, etc. And no more compacting soil where I want to grow things. 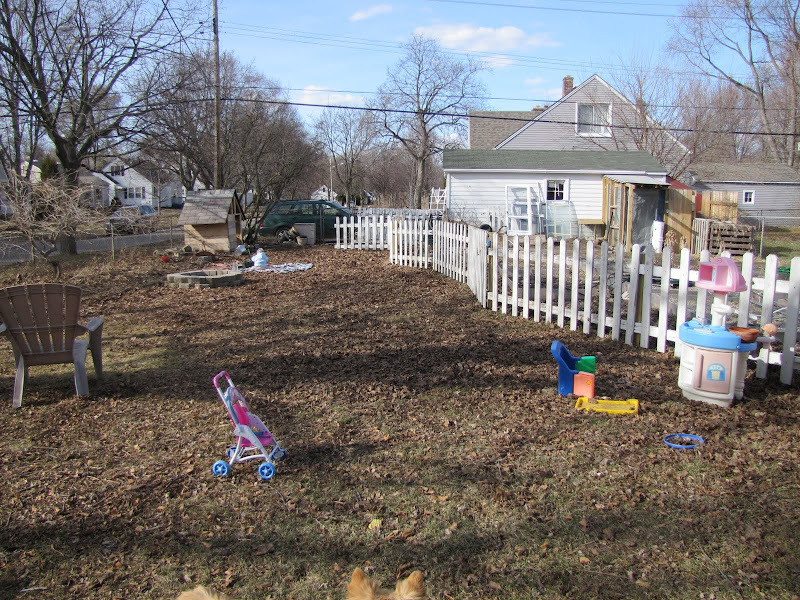 I’ve already started pulling apart that perennial bed and I made a fire pit. We’ll build a pergola thing to go right by the base of the wisteria, to train up the madness, and that will create a shady seating area, too. It should be nice, and will make up for all the maintenance that I’ll have to do with that thing, now that I know it’s going to send up shoots everywhere… 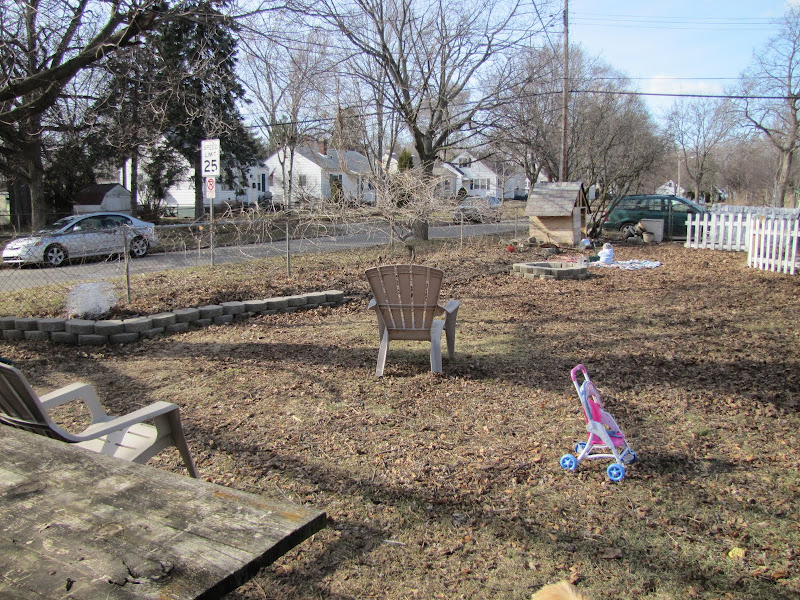 So, with any luck, we’ll have a vined beautiful pergola with a couple of chairs beneath it, and a fire pit right in front. I think we’ll have a couple of stumps for seating on either side of the fire pit, too. 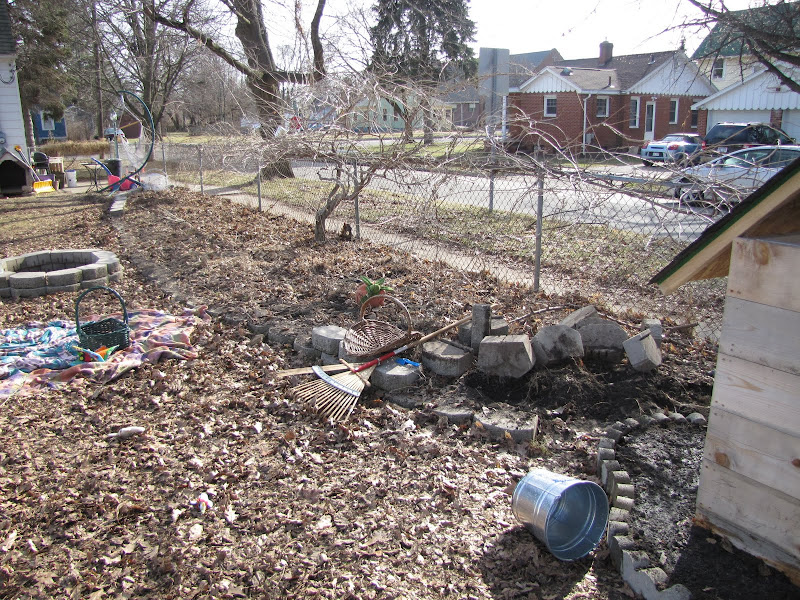 We’ll get rid of the dog house that Maya never uses, and fix up the picnic table with fresh wood. 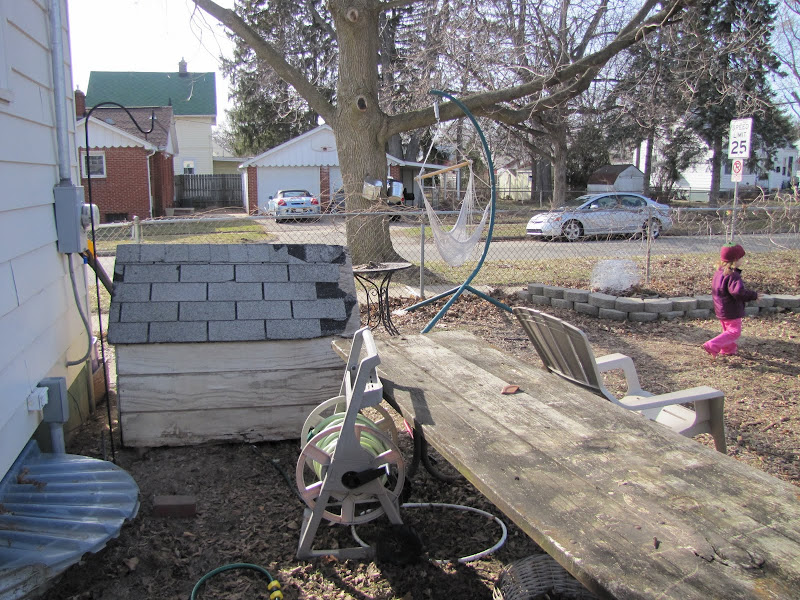 The big project (that trumps all the others) is fencing the perimeter of the yard with a wood privacy fence. We don’t want the privacy, but I think Maya needs it. We don’t want it to be super tall, we’ll still be able to talk to neighbors over it- we’re thinking 5 ft tall. But, Maya has been stressed since moving here. We’re on a busy corner, lots of people walk by and look into the yard and want to talk to us, and dogs walk by constantly. She’s stressed out, and she feels like she has to guard everything. She doesn’t give herself much of a break, and she’s got zero private space, with kids everywhere and everything. So we just realized that we need to create a little more boundary and block the view of all the walkers and dogs. I think it’ll help her relax a little and have some space of her own.
So, with that construction, the next thing we’ll do is build up an awning right next to the house here, over the patio and into the yard some, opening out into the grassy space. That will be our outdoor dining area. I want it long and open, because we often have a bunch of people over to eat, so I wanted it to be good for potlucking. I’m very excited about this part! I even have lighting ideas… 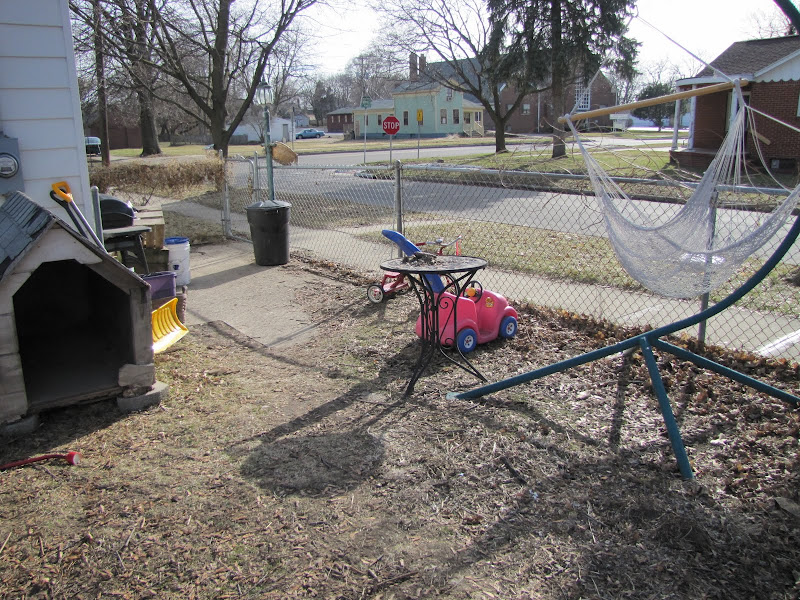 Other side of where the awning will go. We’ll probably have the fence go up another foot right here, just to give us a little more privacy when we’re eating or having people over. 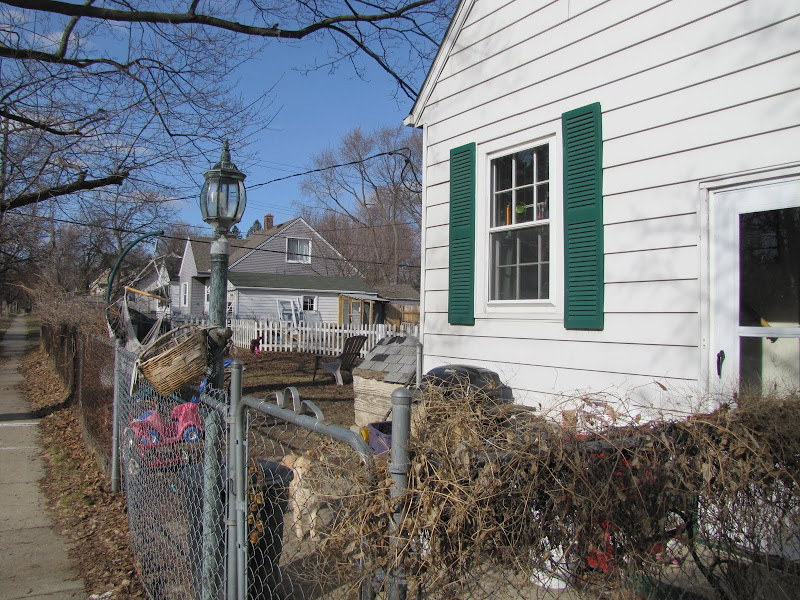 This is the area I’ve decided to move the herb bed to. It’s a good spot, and will be almost full sun after we trim back a couple of branches on the maples. I’ll move the food scraps composter- I’m thinking maybe to the front yard. Or we’ll just give it away, because we’ll have a bigger compost system in the garden. Probably that. 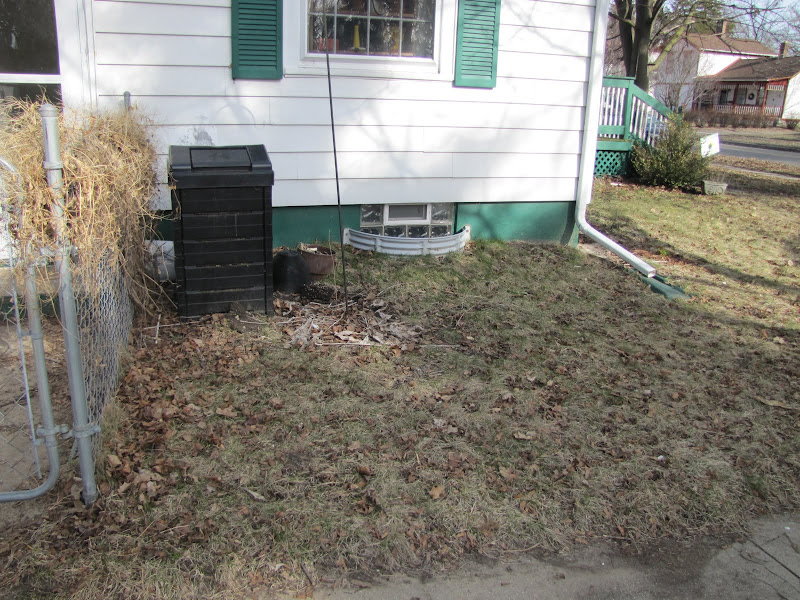 And the front yard… although lovely and sunny now, will be so shady all summer. I don’t really know. I’ll just define the walkways and start planting. We’ll see. I’ve started some hostas, so I’ll at least plant those. 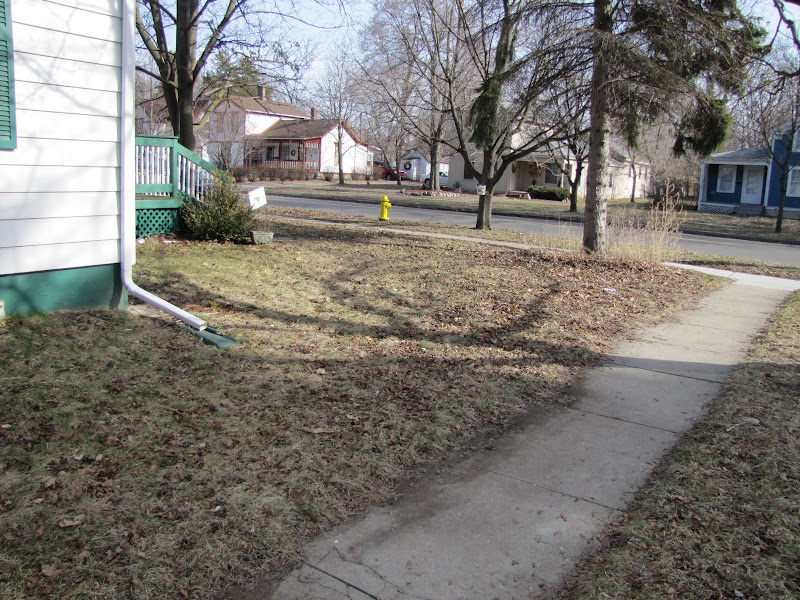 And then there’s the whole parkway area, and we don’t like mowing it. So. I’m gonna just start putting plants in the ground and killing off the grass as I can. This is lower priority, but it’s something I want to eventually do. 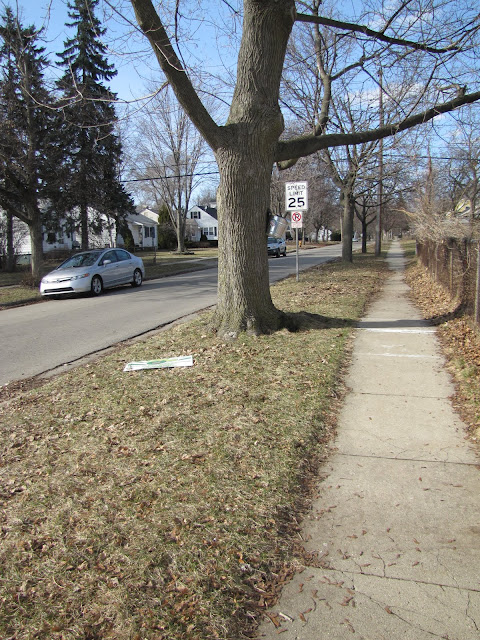 The garden. So much is going to happen here…   🙂 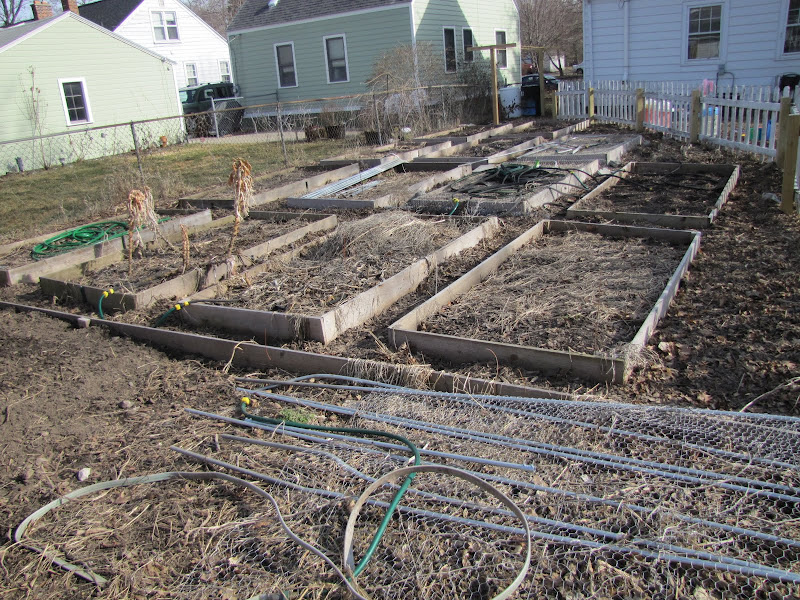 Here’s the greenhouse site. We’ve got all the windows we need to do it- so this fall I’m really excited to start growing stuff in that. 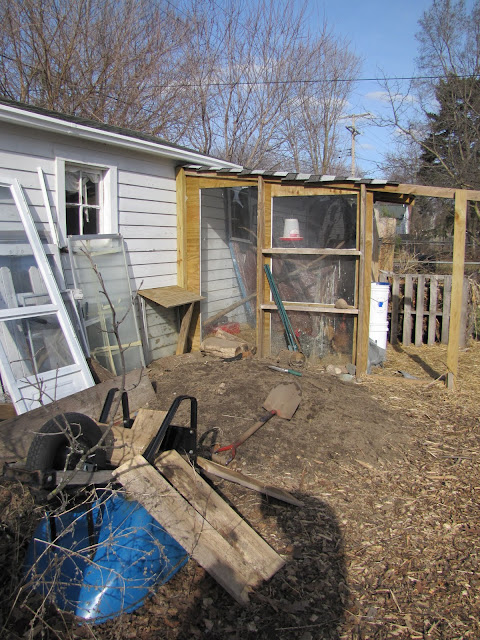 The new and improved compost site. I’m going to be really making good usable compost now, so we shortened the long back raised bed, and are adding more pallets to create 3 different cells for making and turning the compost. Plus we’ve got all that lovely chicken poop to use. 🙂 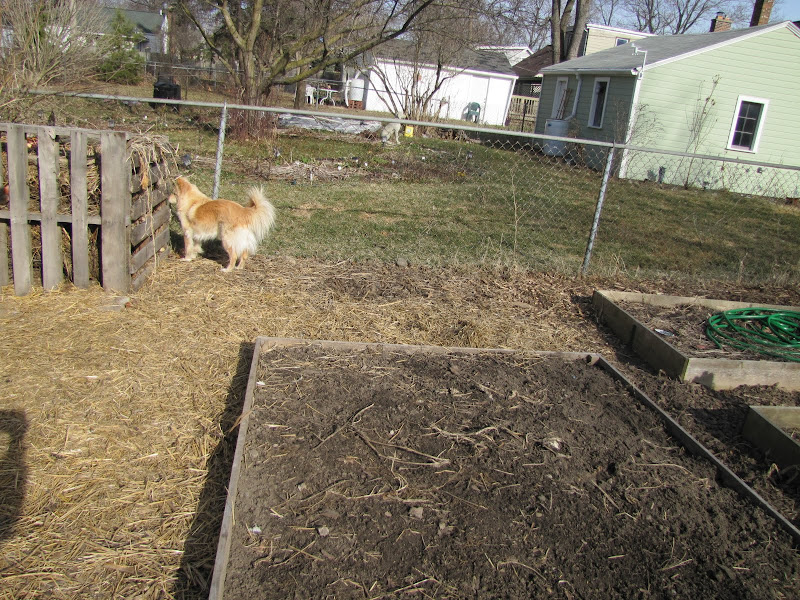 That’s it! Lots of stuff, but we like having things to do. It’ll be fun to watch it all come together (or not!) over the summer/fall. 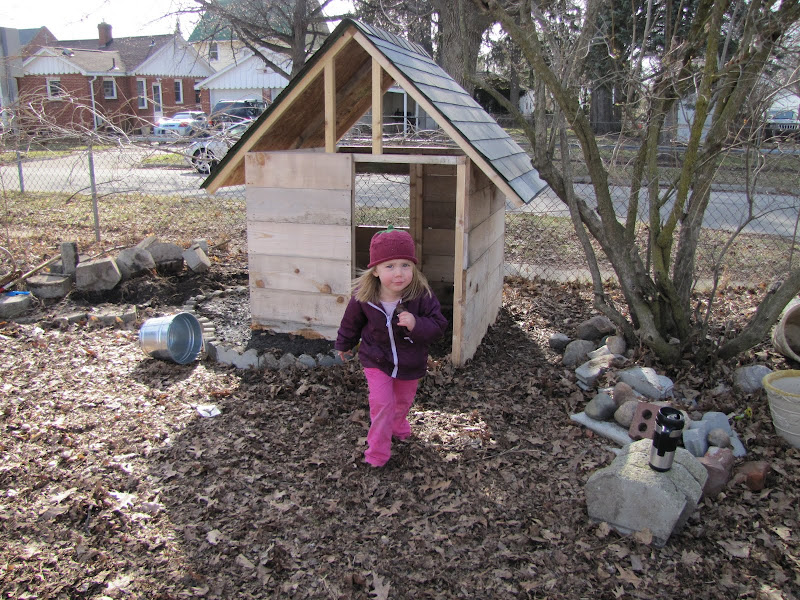 How about you? Do you have any big plans this season?

Tags:before and after, garden plans
13 Comments