Lots to do, but I can’t seem to organize it in my head. So update it is. We’ve been having fun lately, and I’m feeling more and more like that’s the most important thing… you know, just as far as our day to day goes. Like, yeah, I could can a bunch of salsa and be all stressed out because it’s a big old struggle with the kids undertow, or we could just go collect leaves and make fall decorations…

It’s so nice to be able to do these things with her. It was a perfect walk, just enjoying the sunshine and having no agenda or timeline. We picked leaves, hunted for pine cones (which were surprisingly scarce), discussed the Halloween decorations -which were kind of confusing and scary for her, which is an interesting thing for me to witness, having never really celebrated the holiday. I dislike her being scared by that stuff, and I much prefer the Day of the Dead kind of traditions… even though that’s not my culture. Is it bad to borrow traditions from other cultures if they feel better to you? See, I don’t think I want to abstain from celebrating it or talking about death and dressing up and all that, but I don’t really like the way it’s currently done. I don’t like all that crazy awful candy (I know, I know, horrible party-pooper), and I hate her being scared or seeing the yucky gory murderous stuff… but I do like that I get to make her a fairy costume that she’s all excited about (her choice! She said she wants a fairy dress, fairy shoes, fairy wings, fairy crown…) Anyway, I’m working on it. It’s tough with holidays- especially with kids. It’s not as simple as just not participating. They get bombarded with these messages, and so it’s just more complicated than just abstaining or participating. Like, I have to cleverly use this situation to facilitate the learning of our beliefs and feelings about different aspects of the culture, and also finding ways to let them have a good deal of fun and the feeling of inclusion… it’s a tricky task. Anyway. LEAVES. Oh the leaves. 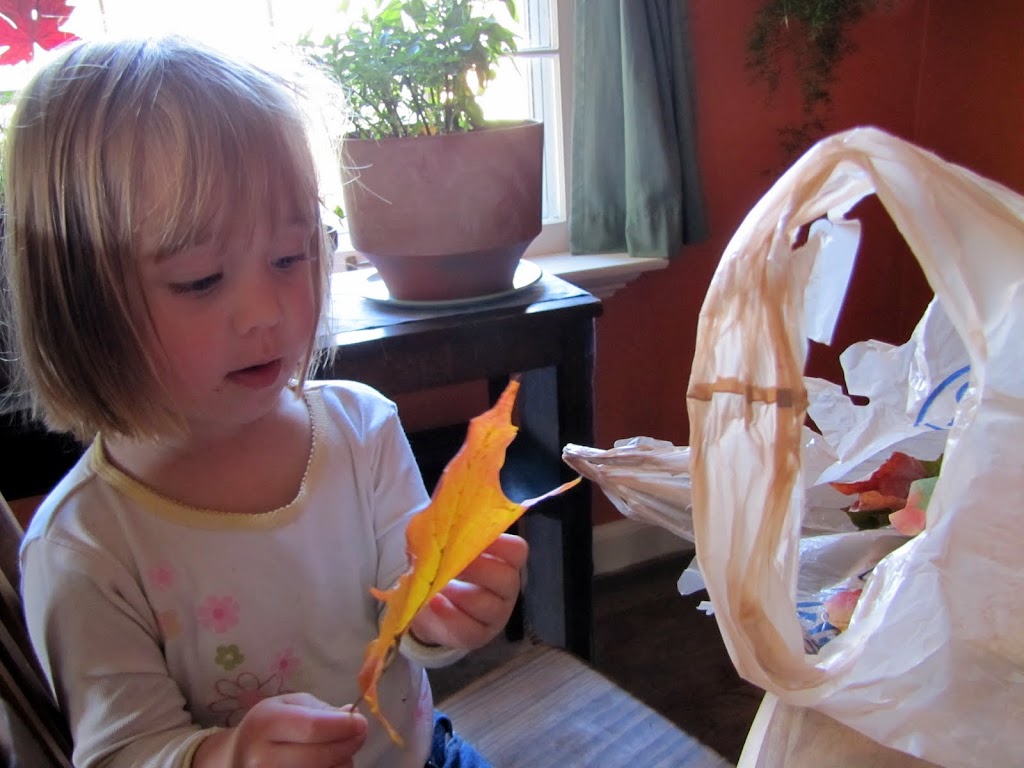 The thing I don’t have any qualms with is celebrating this season. This season feels enchanting to me, always has. One of my favorite crafts was taking leaves and things and ironing them between two sheets of wax paper. At first it doesn’t look like much… 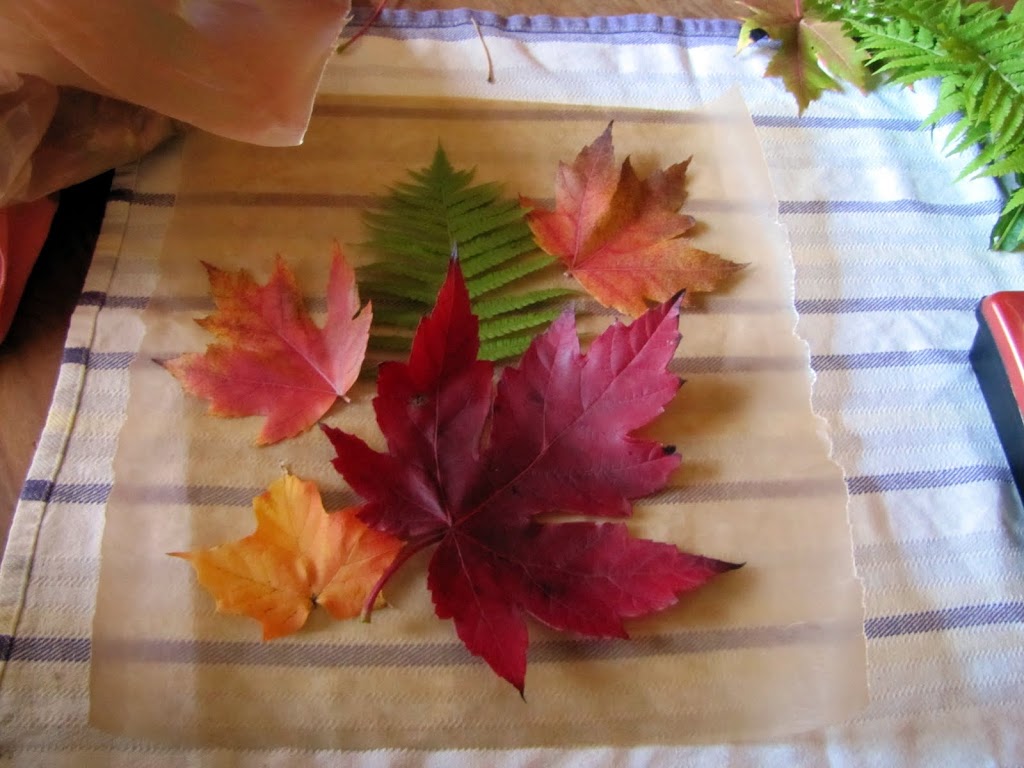 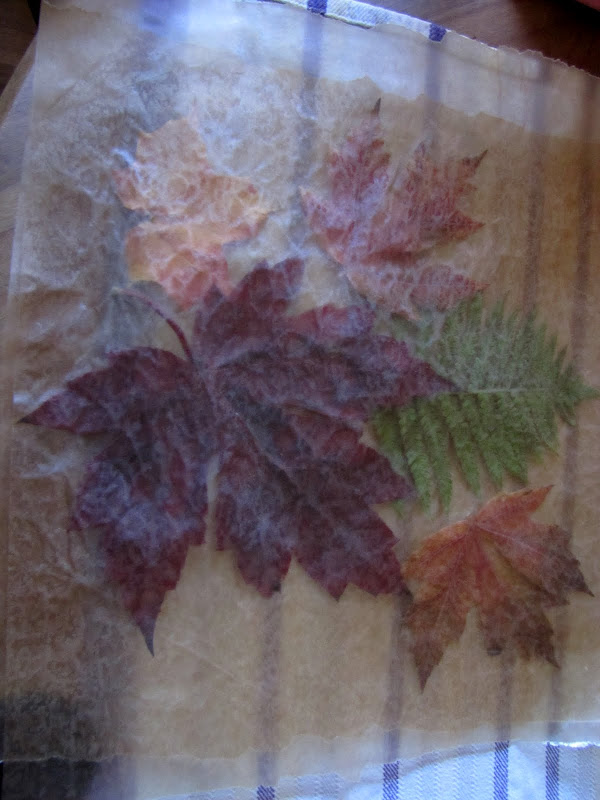 … but then you put them up in a window and it’s just so pretty! 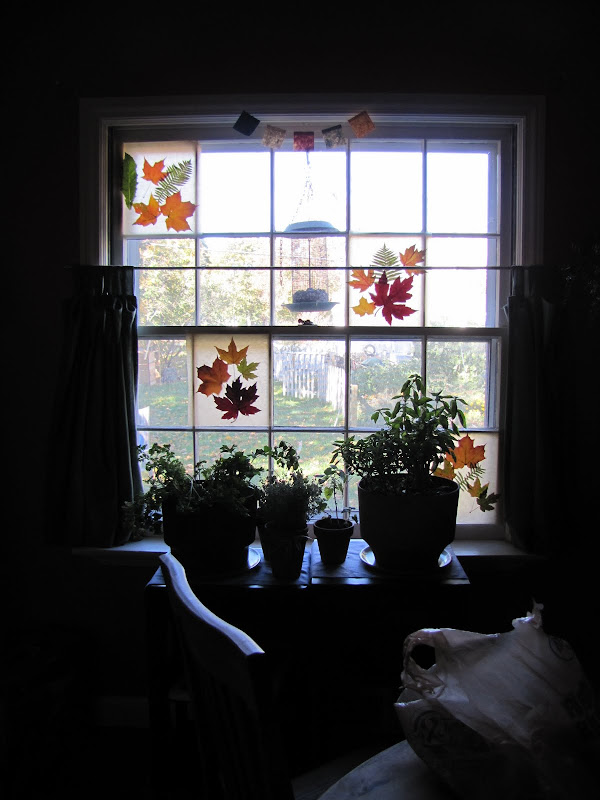 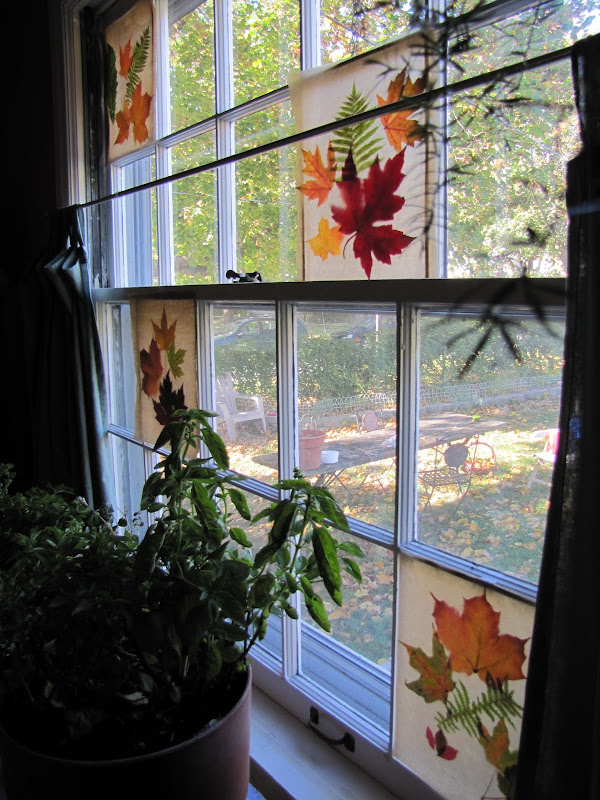 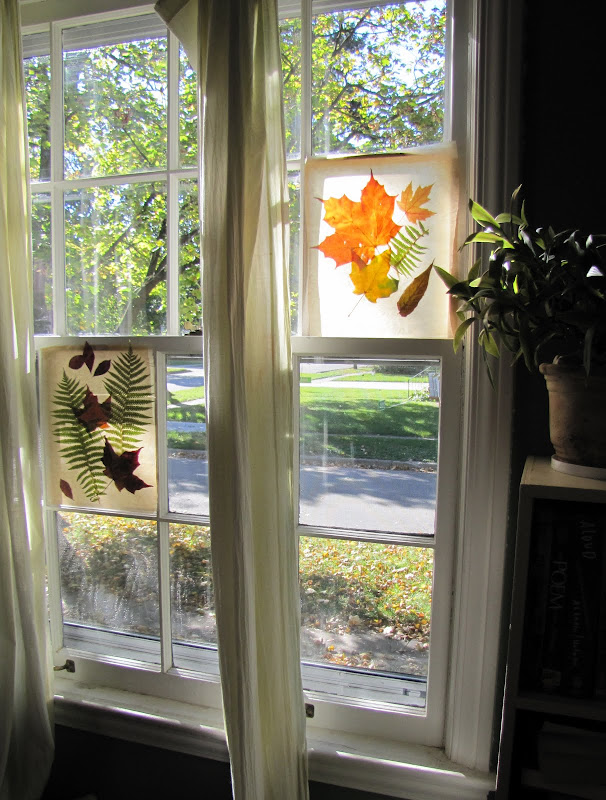 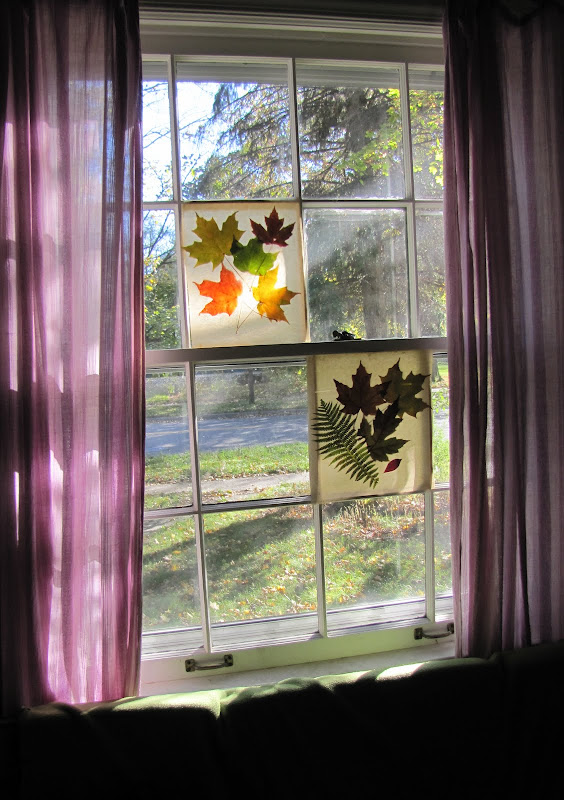 We’ll be doing more crafts as the weather gets cooler. She loves it, and it’s really really good for me to have a reason to do stuff like this.

Sweet pudgy baby. This was right after he pooped in my lap and peed on the rug. I thankfully managed to catch it in his little onesie and only get it on my hands, but still. Sort of lacking in common sense right then… nursing him all naked and squirmy without a diaper underneath him… But he’s so CUTE right now, even after a poo-splosion. 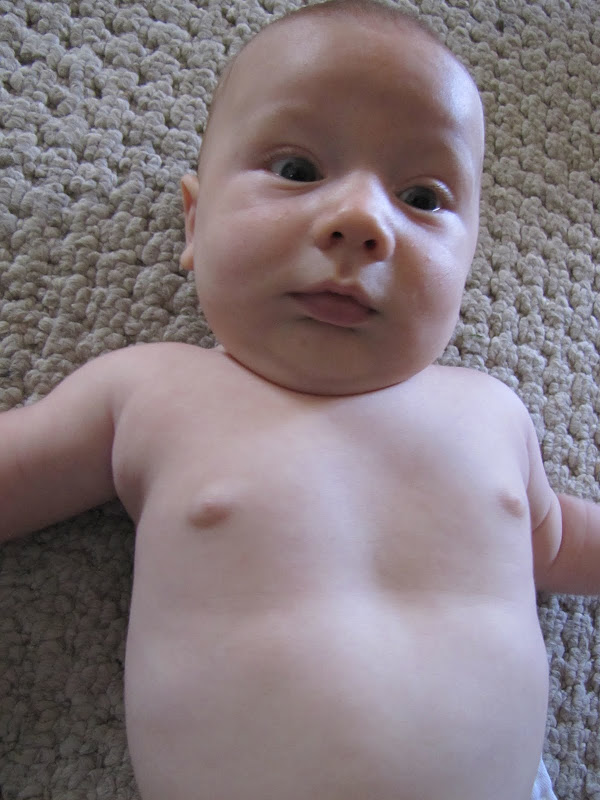 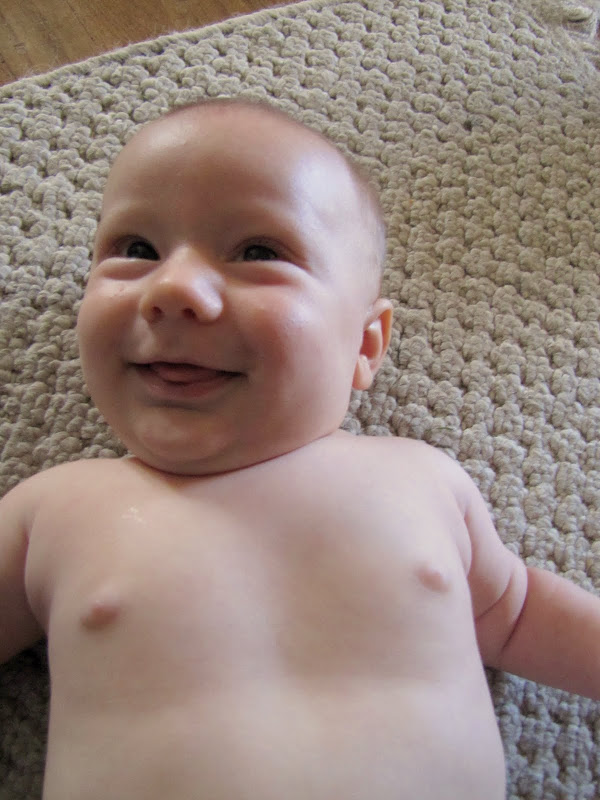 I kept not harvesting onions… probably due to being all newly postpartum and stuff, but it’s really sad that we actually waited so long that they started to sprout. So, no cold storage for these babies, but we can use them in all the last of the soups and salsa, and also cut them up and freeze them. So, still good. They remind me that it’s time to plant garlic! 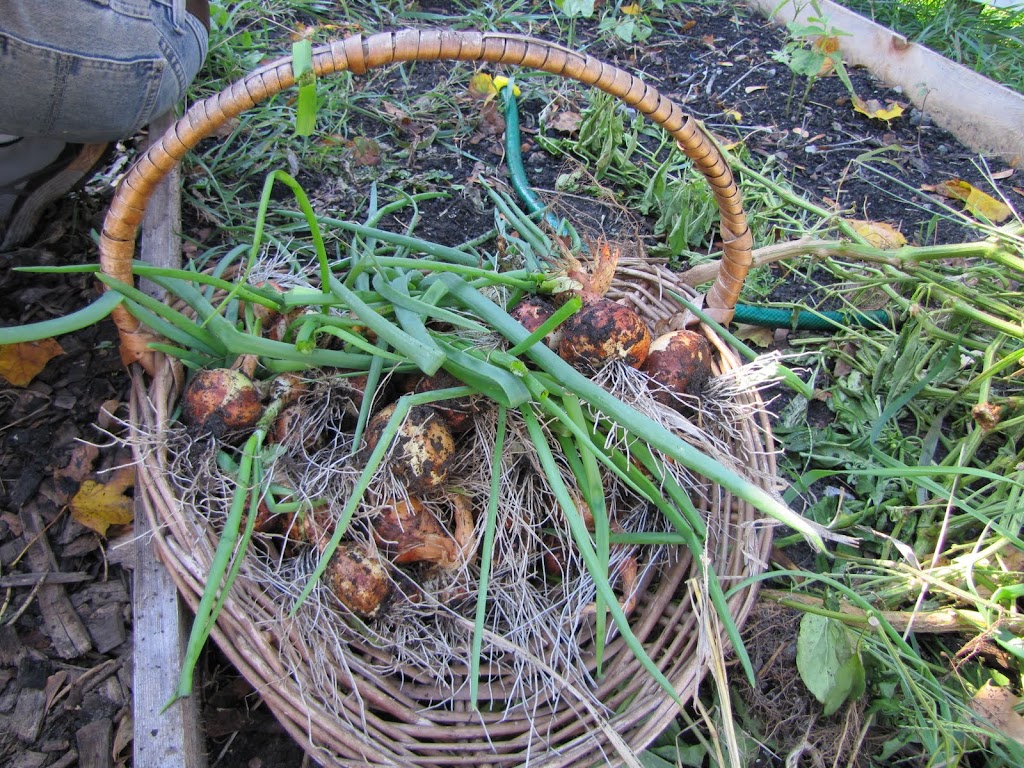 Free-ranging. Odette and Little Yellow were over by the last of the tomatoes with Vera in her "tent". They’re all so overgrown that it creates this little kid sized cove for her. Anyway, this was the first time we just let the roam with the dog in the yard. Maya is totally fine. She got a little frisky for a minute and we corrected her, and now they’re just all out there sniffing around. So great. Now I don’t have to worry about keeping Maya in while they have yard-time. 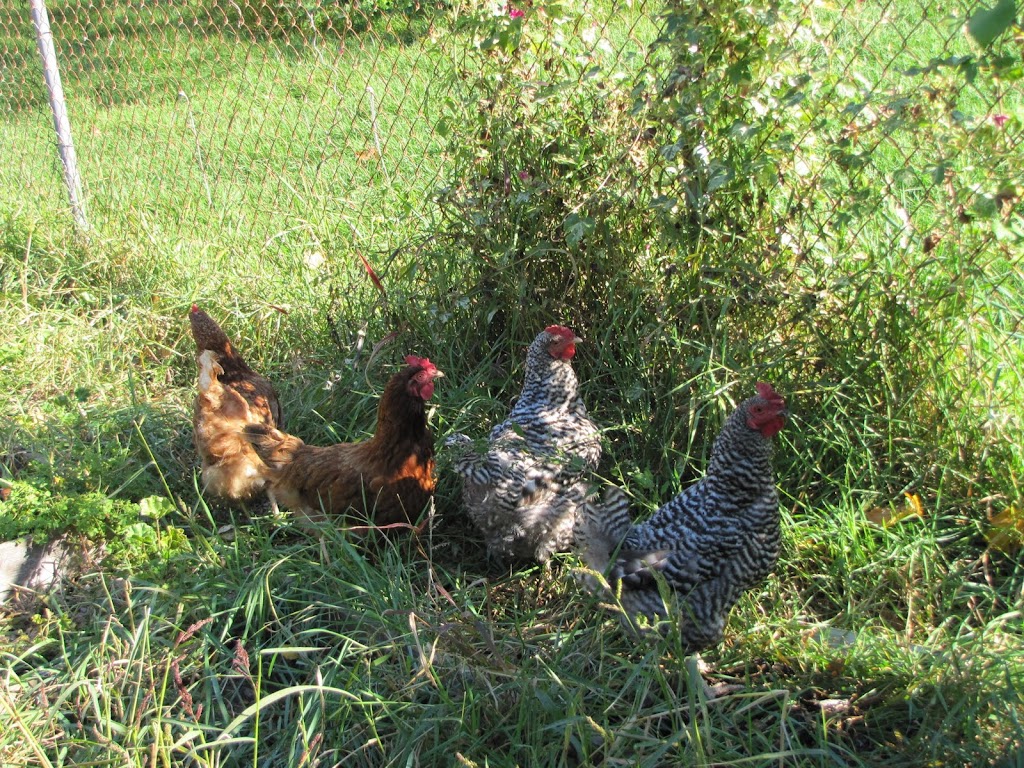 So much nasturtium. Pesto pesto pesto. Thank goodness for pesto. 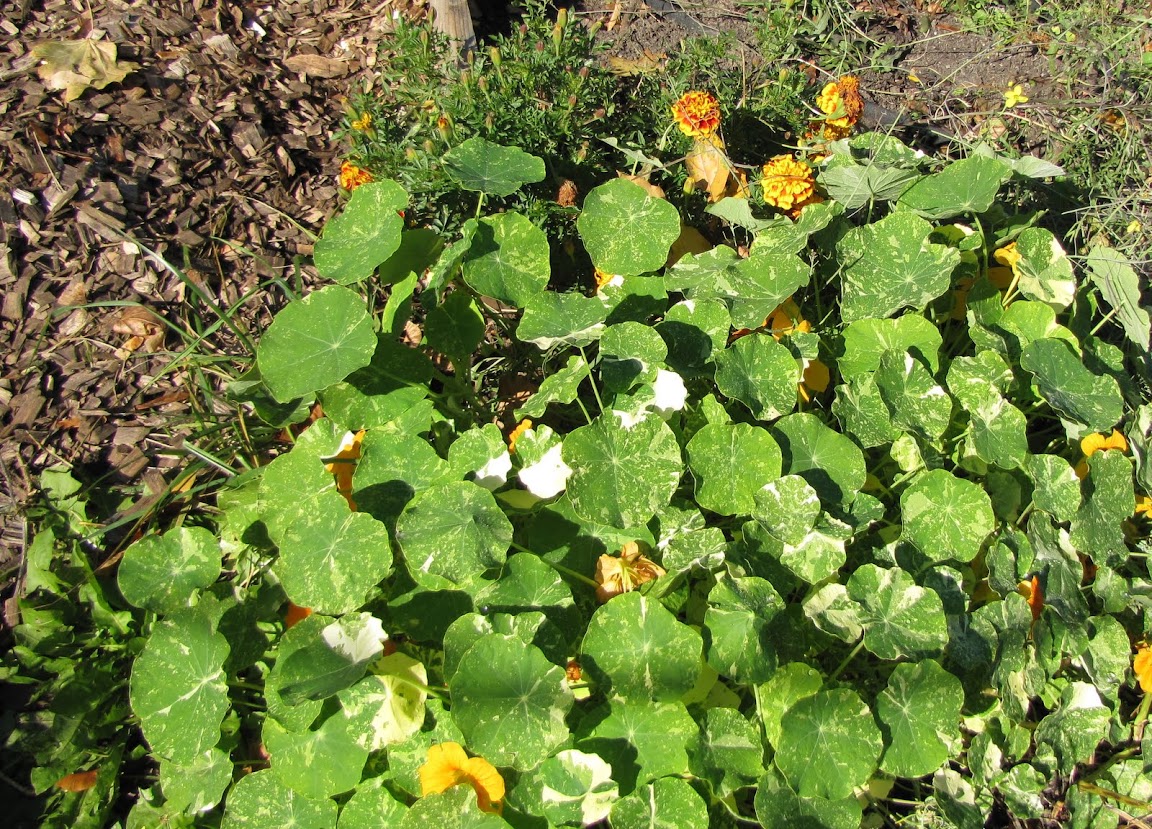 My sweet pup, all happy and loving the chickens. 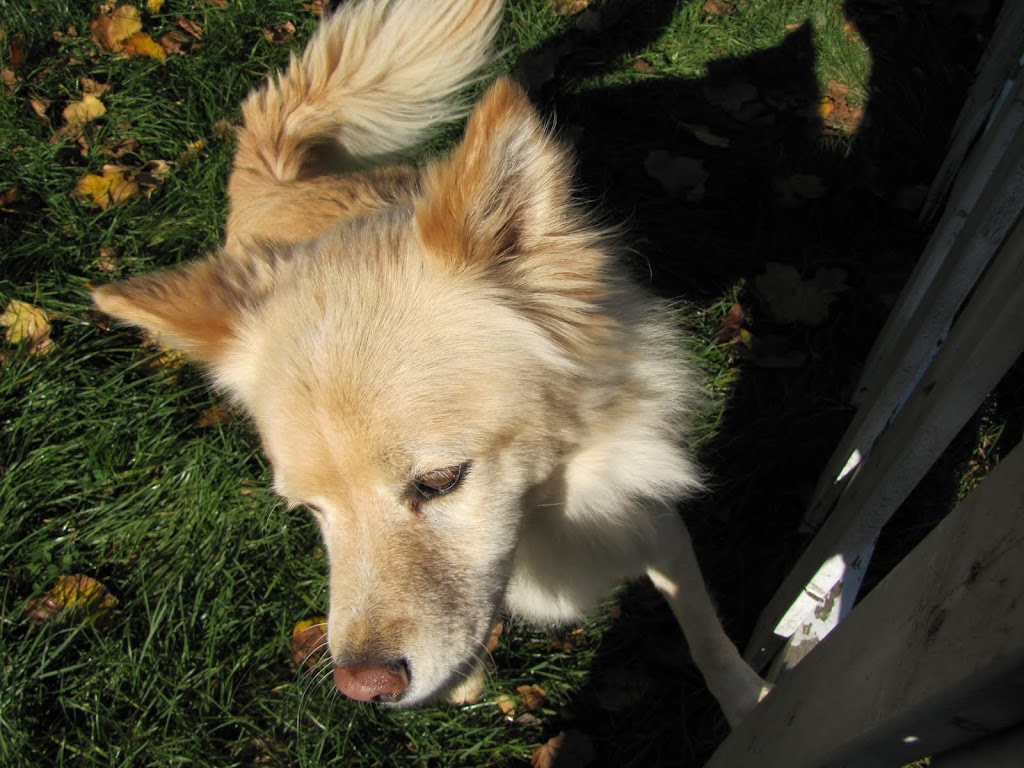 And now it’s nap time and I can get some of this salsa underway while they sleep. I won’t be back until Wednesday, there’s just too much to do, but I’m still reading when I can. I’ll leave you with this great poem I read recently:

The Summer Day
by Mary Oliver

Who made the world?
Who made the swan, and the black bear?
Who made the grasshopper?
This grasshopper, I mean-
the one who has flung herself out of the grass,
the one who is eating sugar out of my hand,
who is moving her jaws back and forth instead of up and down-
who is gazing around with her enormous and complicated eyes.
Now she lifts her pale forearms and thoroughly washes her face.
Now she snaps her wings open, and floats away.
I don’t know exactly what a prayer is.
I do know how to pay attention, how to fall down
into the grass, how to kneel down in the grass,
how to be idle and blessed, how to stroll through the fields,
which is what I have been doing all day.
Tell me, what else should I have done?
Doesn’t everything die at last, and too soon?
Tell me, what is it you plan to do
with your one wild and precious life?