I'm a little sick right now. Whenever I'm sick it really puts how much I accomplish into perspective. I'm often feeling like I don't get enough done (the house could be cleaner, I only got 2 things checked off of my list of 10 things, etc…), but then I'm sick for a couple of days and I realize what this place could be if I checked out… I mean, it would be a hot mess! I'm not a perfectionist by any means, and my house is often messy and disorganized. But this whole two-young-kids thing? Oh my. Jeff goes to work and I'm feeling fuzzy on the couch for a day, and the place transforms before my eyes. You would think the mess around me would have me feeling discouraged, but it's actually pretty validating! So there ya go. I was feeling a bit better yesterday and overworked myself and today has me feeling it. So, I'm sitting outside with the kiddos and dogs (because it's like 70 degrees… in March) with snacks to keep them happy, and just checking out for a while.

—
Asa is becoming his own little person, and fast. I suppose he's always been himself, but lately he's got attitude… He's silly, opinionated, and impossibly sweet. It's also been really fun to sing with him lately.

This morning I was taking a little walk up the street with them. I held both of their warm little hands, and they trotted along with me. It just felt so overwhelmingly good to me. Like, these two precious souls are here. That's just a good thing. Makes me grateful for my life, my partnership with Jeff, all the long days and restless nights, just everything. We're a part of things.

I found the two of them like this. Vera painted his face, and Asa couldn't be more pleased.

Seed starting. I decided since it's so warm out, I'll just go ahead and transplant all the lettuces I'd been growing under lights. They are hardening off now- I'll transplant them in the next day or so. Beneath those were the last of my microgreens. I'm a fan, although after finding out that they are not nutritionally superior to older plants (contrary to many claims that they are…) I figure I'll just focus on growing baby greens mostly. The benefits I can see to growing the micros are: a) high turnover- only about 2 weeks from seed to plate, as opposed to about a month for baby greens. b) they are gorgeous and really add to the aesthetic of a meal. c) they are very nutritious, just not more so than any other greens. d) there are a couple of varieties that I think I will actually grow year round and sell, especially pea shoots. Pea shoots are soooo delicious, and besides, it's the only way I can actually eat peas. Disadvantages are: a) they take a lot of seed and soil, for a fairly small volume of greens. b) considering that, I'd have to sell them for considerably more than I would for baby greens. c) since the nutritional claims are kind of from nowhere, I can't really see the point in investing a lot of energy and money in them. Conclusion: we'll grow them for ourselves for fun, grow certain high-yielding varieties for sale, and primarily focus on four-season urban farming for now. 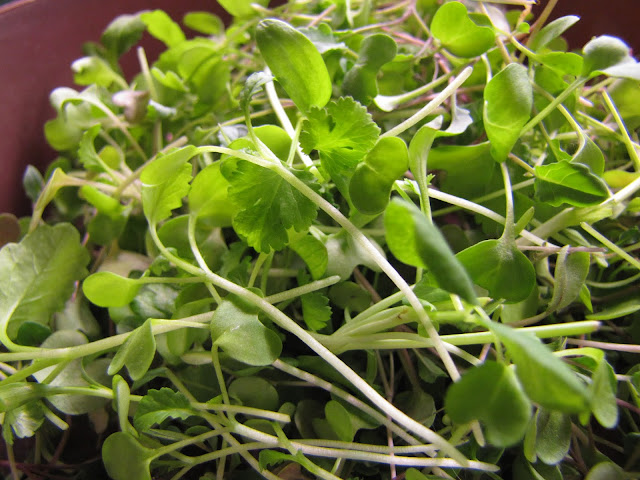 My little office on top of the chest freezer in the basement. I mentioned last time that it's just too cramped! This is a job that requires more room and sunshine. We were growing out of our little bedroom, and decided to move upstairs to spread out a bit. So now the old bedroom turns into my office/sewing/farming space. 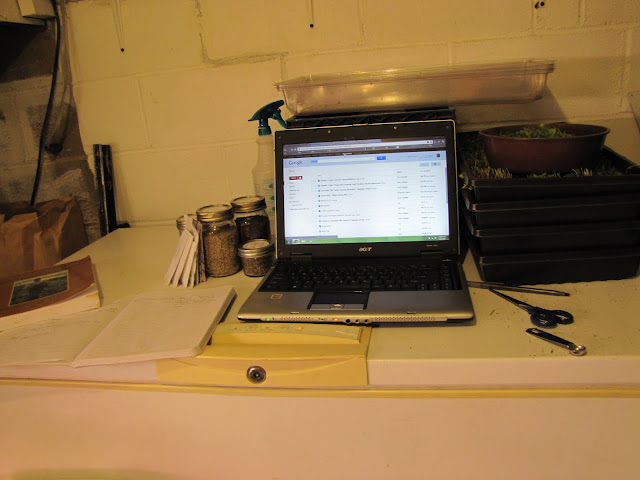 —
Food. Good as usual, although a little less planned out recently. Roasted root veggies are a staple lately, along with skillet-type meals. 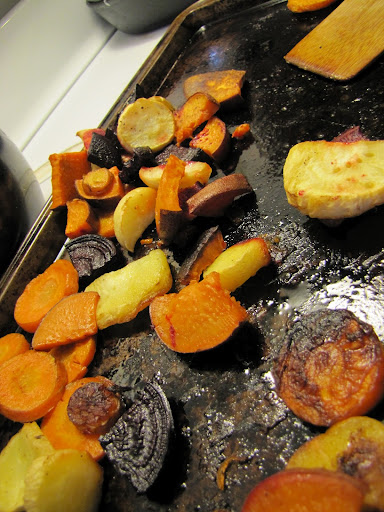 Notice a little doggy in the door of the greenhouse? This little guy has been such an escape artist lately. He got out 3 times the other morning while I was home alone with the kids. Thankfully I have awesome neighbors who helped. He's so quick and smart that I had to resort to running around in someone's driveway down the street while throwing a ball to myself, pretending to have loads of fun and not be interested in him. That's what finally got him to come close enough so I could grab him. I'm positive I looked ridiculous. Nothing new though, really. Anyway, this time I thought he got out but he had just been in the greenhouse when the wind knocked the door shut.

We figured out that he was getting out by jumping over the compost pile into our neighbor's yard, where the fence is open. I fixed the problem that day by putting a couple of our chicken wire trellises in front of the compost. He found his way through the garden fence again that day and I watched him get all frustrated and whiny now that his escape plan had been foiled. I laughed at him through the window. Ha ha ha. One forgets how much work a little one is. It has brought back many memories of Maya as a puppy. Except, with Maya I didn't have to worry about leaving two young kids in the house while I run aimlessly through the neighborhood.

Straw bale gardening. I've set up several beds already. Basically, after a little conditioning (wherein you get the bales to partially decompose inside), you can plant directly into them. They are a cheap (about $2.50 a bale) way to get some new garden beds established with very little work. I've wanted to plant up the strip of land between the sidewalk and street for a while now, and I think this is the perfect way to do it. They can also be quite pretty.

It has, however, made us even more of a spectacle than we already were. We're getting lots of questions, some funny looks, and rumors about how some people don't care for what we're doing. Other people are positive and interested, and those are the ones who approach us to talk about it. I'd like to think that the latter are the majority.

I have never been one to like the spotlight, and so it's all mildly uncomfortable and sort of funny to me. I am just growing veggies, folks! Who knew that could garner such attention. We are not the Joneses, that's for sure. We're the people with the city chickens and under dressed kids. We're the ones who are dumping straw bales all over the place and hanging sheets on the fence (which I'll talk about later) while the kids and dogs play on the broken picnic table. I find it to be endearing, but I can't expect everyone else to. 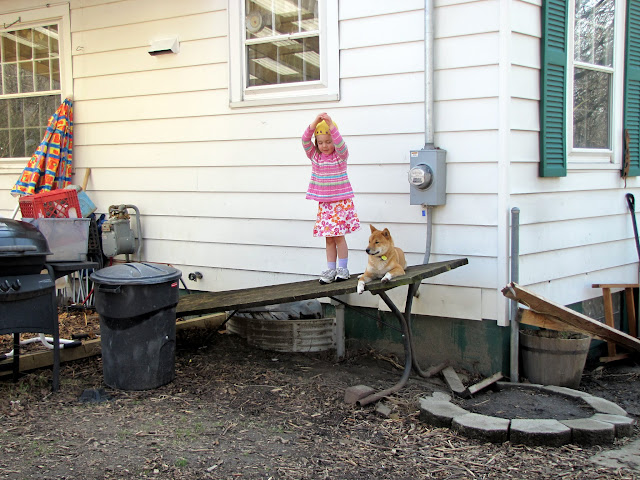 I kind of think we're fabulous, and that's in spite of the negative looks I've seen. I think Vera shares my sentiment.

Poor Maya had to get the cone. She's healing up really well, but she's itchy and picks at it. My neighbor calls it the "cone of shame", but the vet called it her "party hat". Pretty sure that Maya agrees with my neighbor.

I do like how it creates just a framed little Maya head. Love this dog. 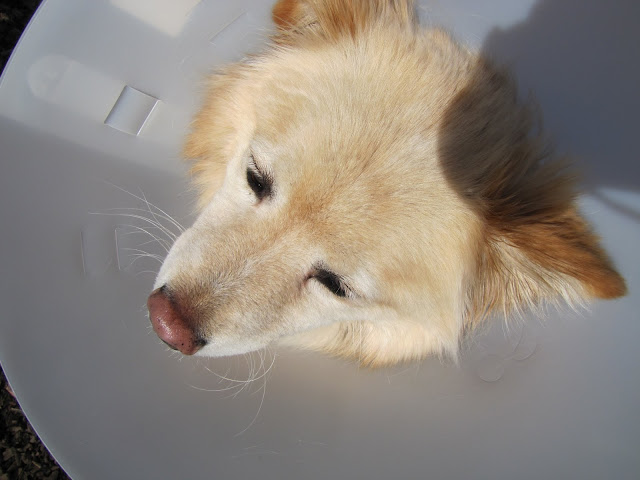 Asa napping on the couch.

Partially emptied old bedroom. I can't wait to work with sun streaming in the windows… just more elbow room and fresh air will be really great.

The upstairs is a big open space, but I've really been liking having a nice small sleeping area. Just a bed and some books. So we chose this little nook (my old sewing/art area) to put our bed. It's already so cozy. I just have to put up some more pictures, a plant, some curtains.

Okay, that's all for now.