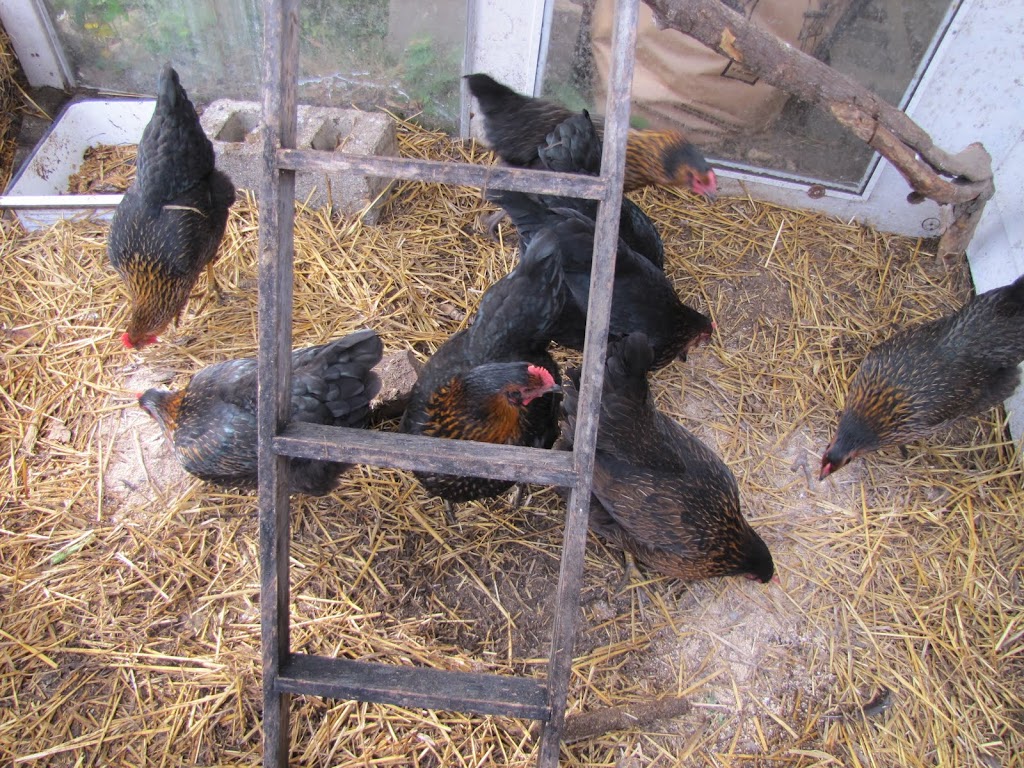 Say hello to our new flock, "The Odettes". We are calling them that because they all look like our old saucy bird Odette (now in a loving new home with Little Yellow). We had kind of settled into having the 3 little peeps until spring, but then it occurred to us that a) we hate buying all those eggs, we are chicken people! and b) if we wait until spring we have to disrupt the pecking order yet again, and why would we do that after all that we just learned? So we started checking craigslist and found someone selling these beauties. They are young, just started to lay. The plan is that we'll keep this flock for two years, and then in the fall we'll start fresh with an entirely new flock (and have 8 soup birds). We've already got a few eggs! 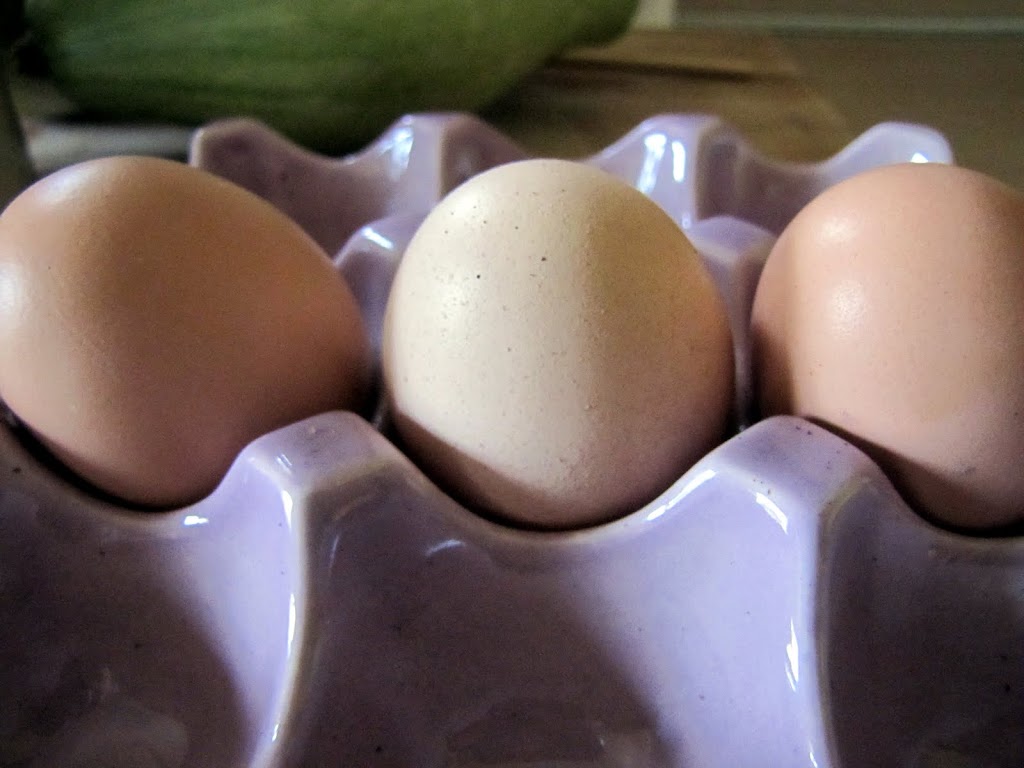 We would have just re-homed the peeps, but Vera loves them. So we moved her little house away from the fence and sidewalk and added a little chicken coop/run next to it. They are now her responsibility, and she'll feed them and gather eggs, etc. They will be more like pets, I think. Anyway, we just didn't want people walking by and taking issue with all the birds. We are still in the city… 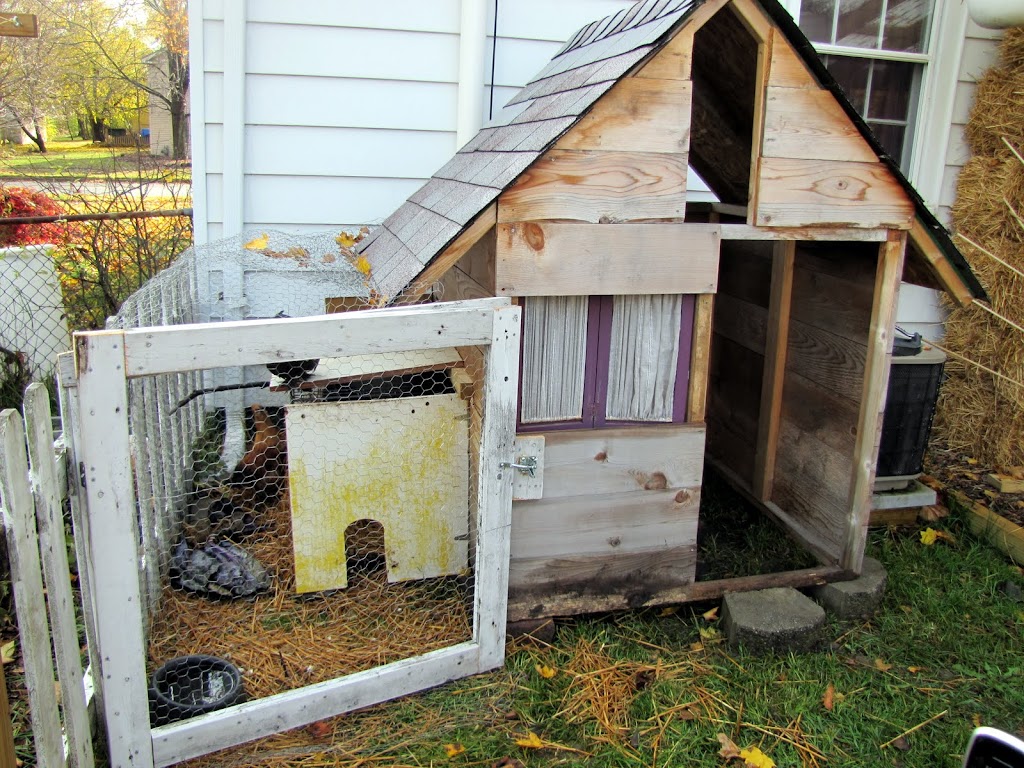 Although my guess is that we'll end up with less than these three because I suspect that the black cochin hanging out up top is a rooster. I heard some suspicious vocalizations the other day. We'll see, I suppose… 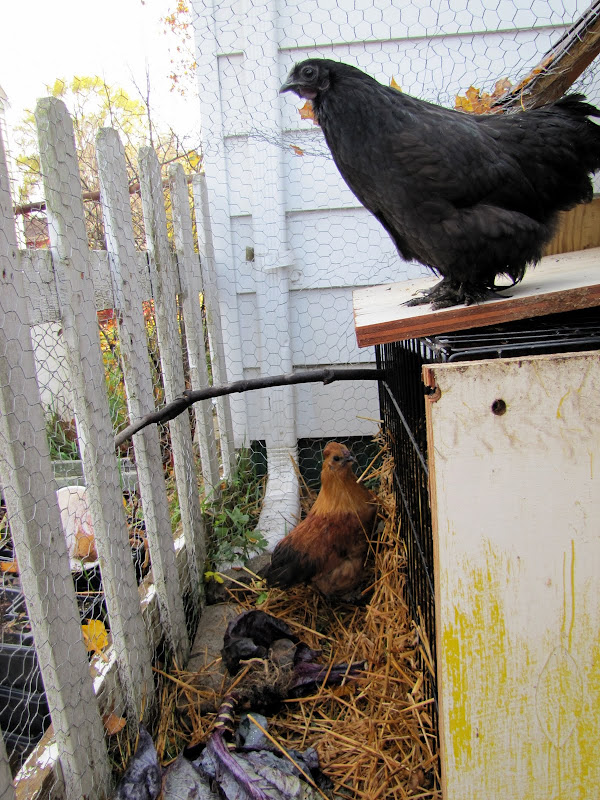 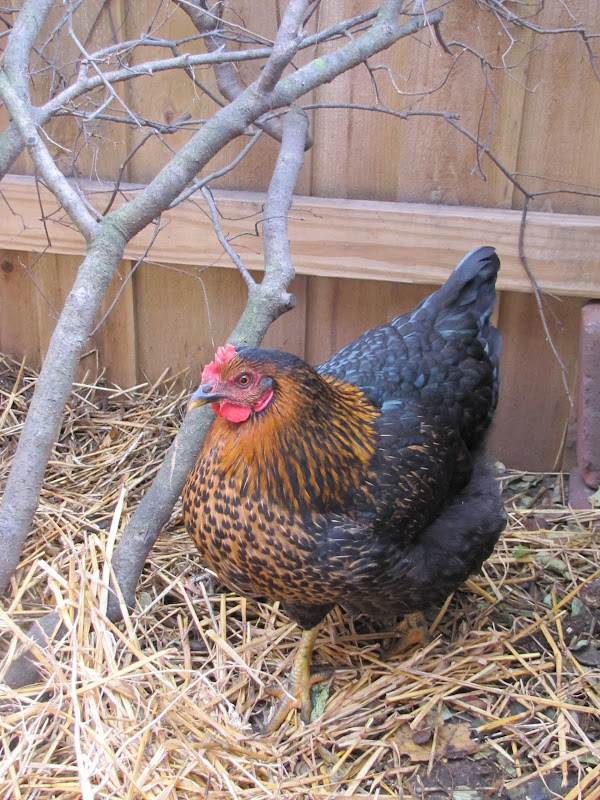 We've been chipping away at things outside. I think we caught the last really nice day to do a lot of it. 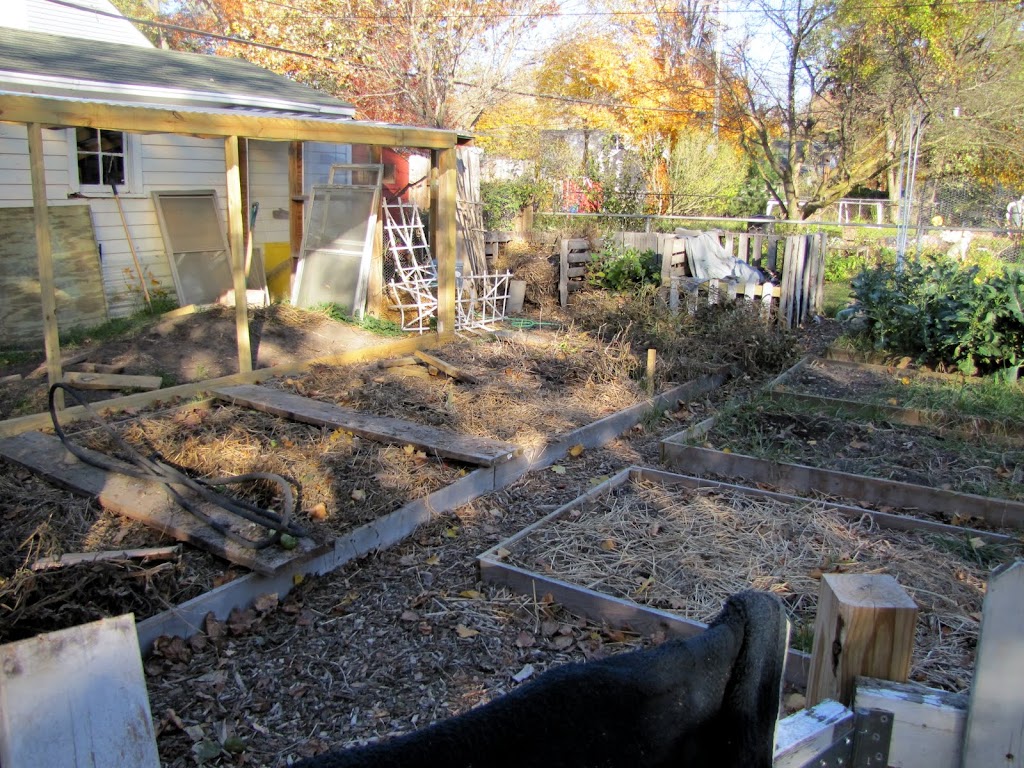 Jeff reduced the width of this bed so that we could have a wider walkway between it and the greenhouse. 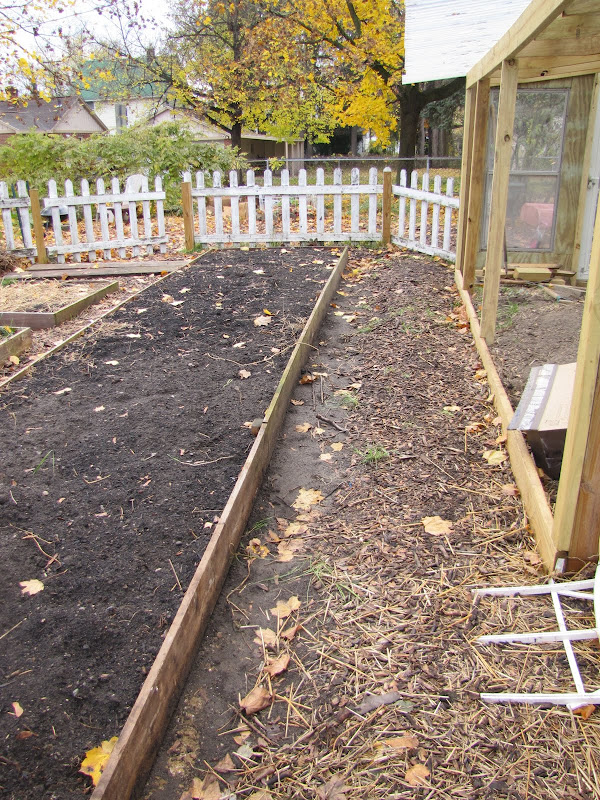 I love that we receive other people's yard waste. Those leaves are valuable! 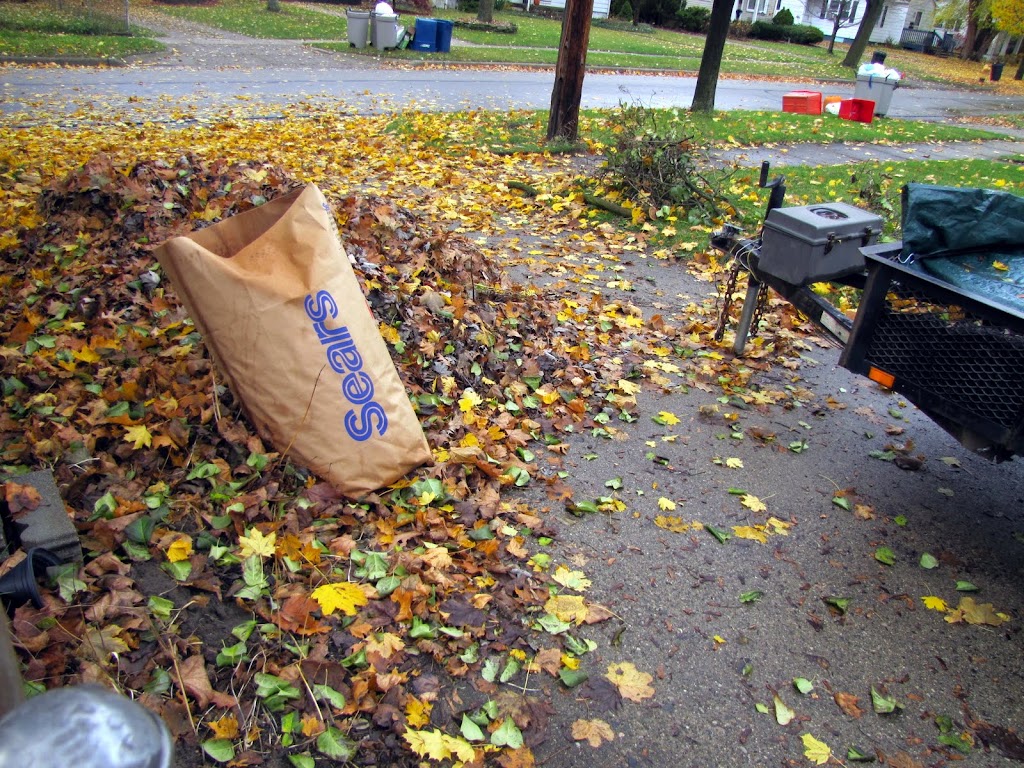 We just finished our third summer here. I was preparing a bed to plant garlic. It was weedy- normally I don't care too much about weeds, we just kind of combat them in more passive ways and keep them pretty at bay. But we have a little crab grass which can be hard to get rid of (it spreads through rhizomes and you have to get all of the root out otherwise it sprouts multiple times for every one bunch you pull). I was loosening these clumps of grass and following their roots with my hand through the soil to try to get it all. It was such a fast and easy job, with this luscious loose soil of mine. My hand just kind of glided through, pulling it all in just a few minutes. I was so pleased to see the result of really nurtured soil, here. No compaction from walking around it, and I hadn't tilled or cultivated it at all (we use a no-till method)- just fluffy awesome healthy soil. I took this picture of it, because I'm realizing how important and beautiful it is. 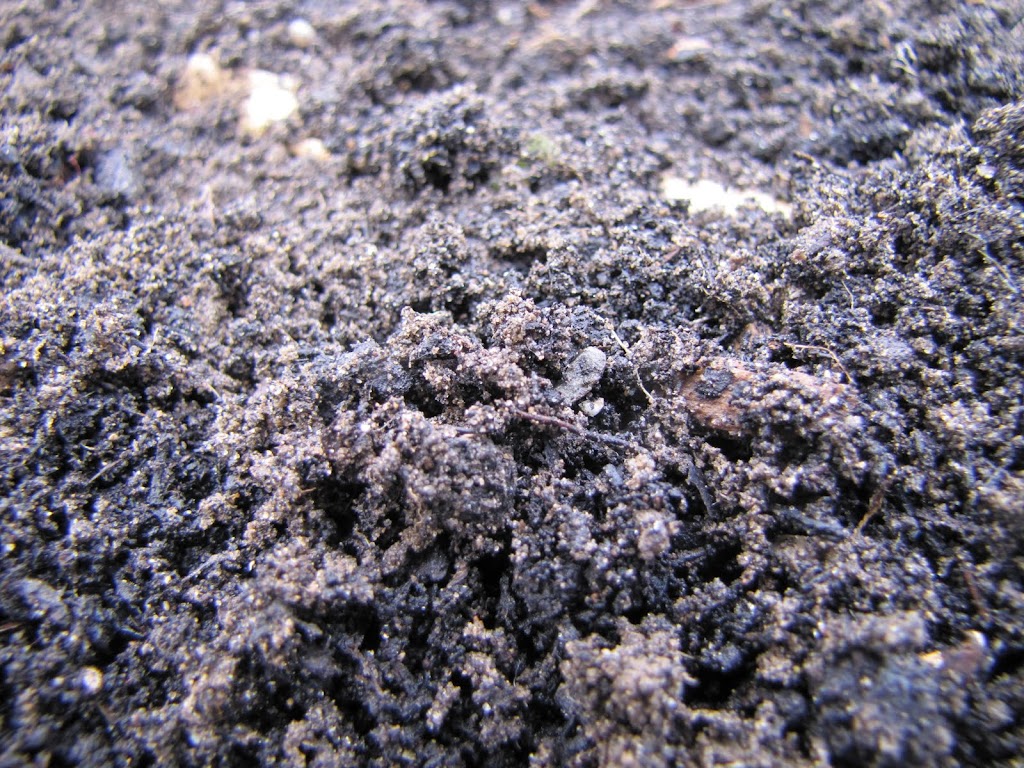 Garlic was planted- despite the fact that it was just me and the clingy kids. 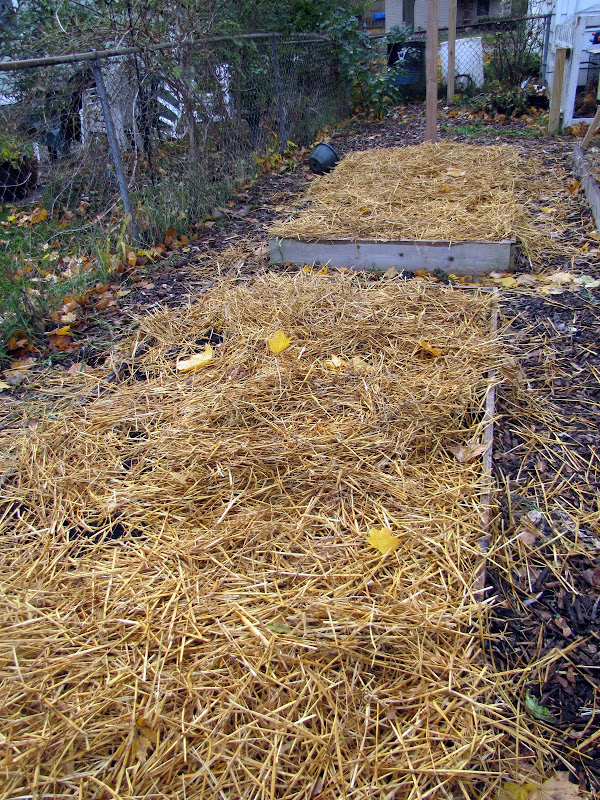 I also pruned and mulched all the berries. 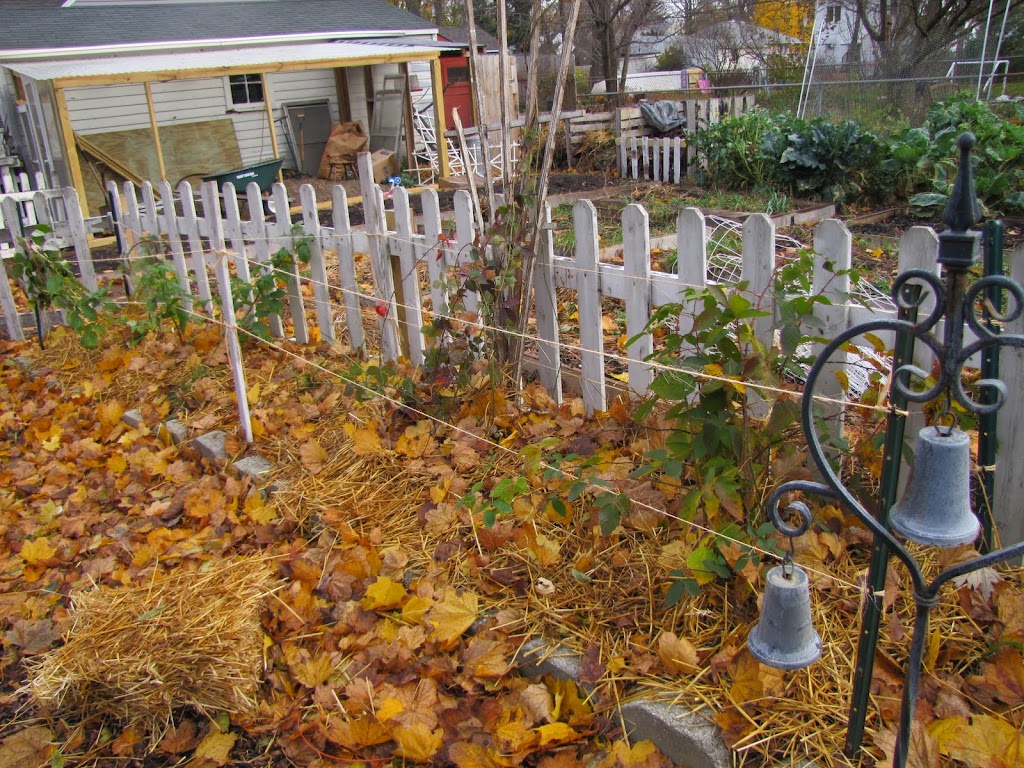 I think our brussels sprouts have been ravaged by aphids, but they are pretty, nonetheless. 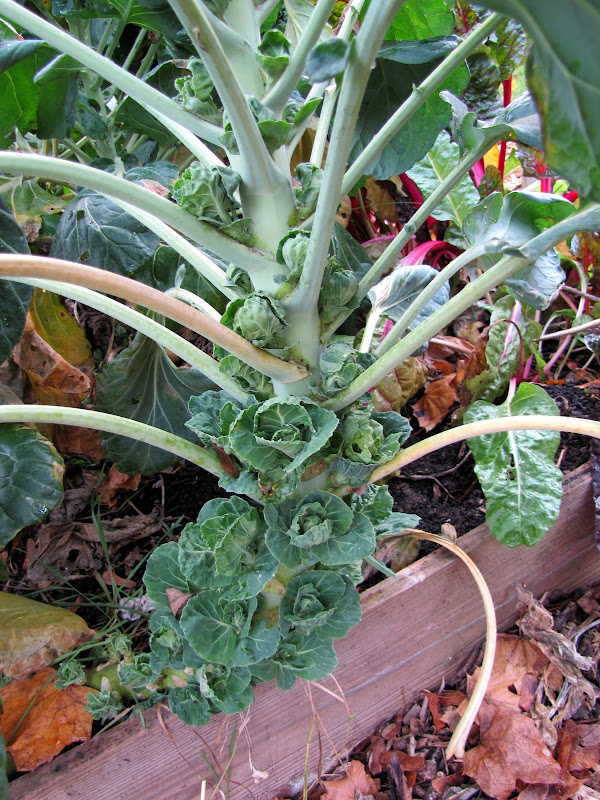 Chard is always a sight this time of year. Those colors! 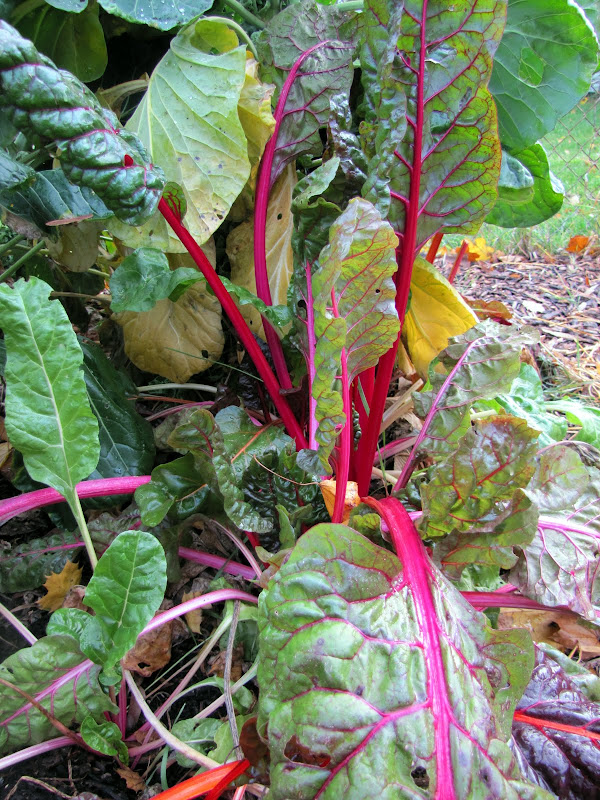 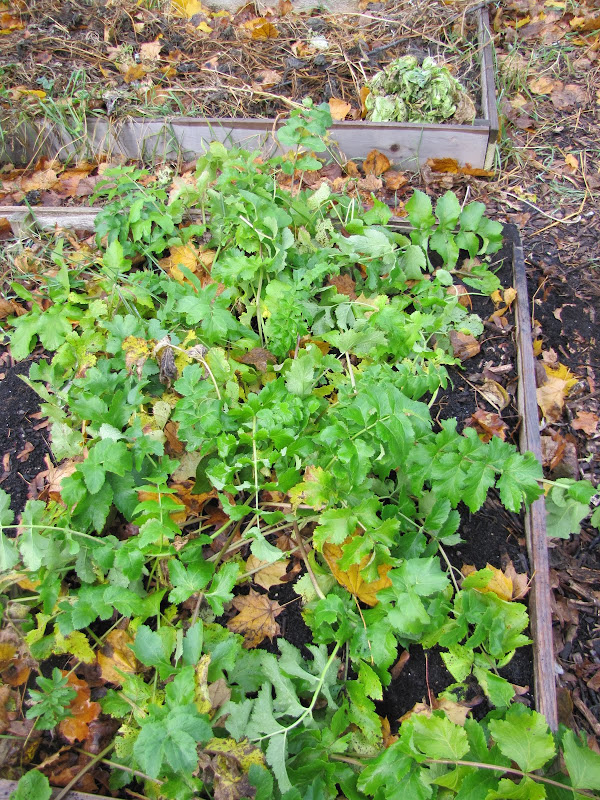 Parenting has been a tough gig lately. The kids caught bugs and we had to work through that. Mostly it's teething that's got us working hard with Asa. He's a good sport- such a sweet smiley kid. But sleep is the issue. We haven't had a full nights sleep in weeks. Some days it's so bad that I kind of mope around the house feeling depressed and am totally unable to concentrate. And then of course Vera suffers when we're like that. Most days we get by just fine, but we are tired. It's not uncommon to be up for an hour or two with Asa in the early hours of the morning just trying to get him to stop climbing on our heads. Not to mention the crazy amount of nursing that I'm doing at night to soothe his sore gums. Occasionally we wake up thinking "Oh wow, I think we actually caught a few hours in a row!!" Last night he went to bed around 9, woke up at 10:30 and played until 1am, then woke up around 3:30 for an hour, then nursed until morning while I tried to sleep as much as I could. This is like… a regular occurrence. I'm not trying to complain… perhaps I just want to document it. It's been going on for so long now that I'm just ready to move past it, but I know we have a little ways to go yet. At least Jeff recognizes that he gets to sleep through all that nursing I'm doing, so he tries to help as much as he can when he can. Such a good guy. We have felt like a good couple through all of this- we often are so sleepy in the morning and we just hug and say "Same team…" before we start the day. It's good. All of it. 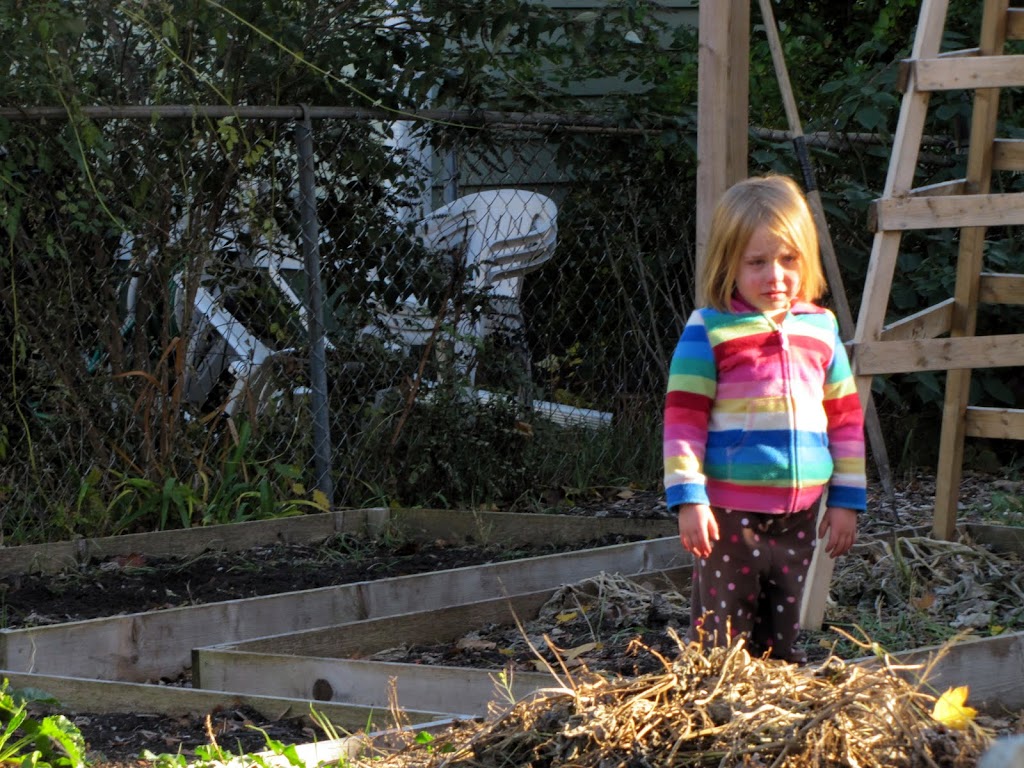 The sky looks crisp to me- it feels like winter is almost here. 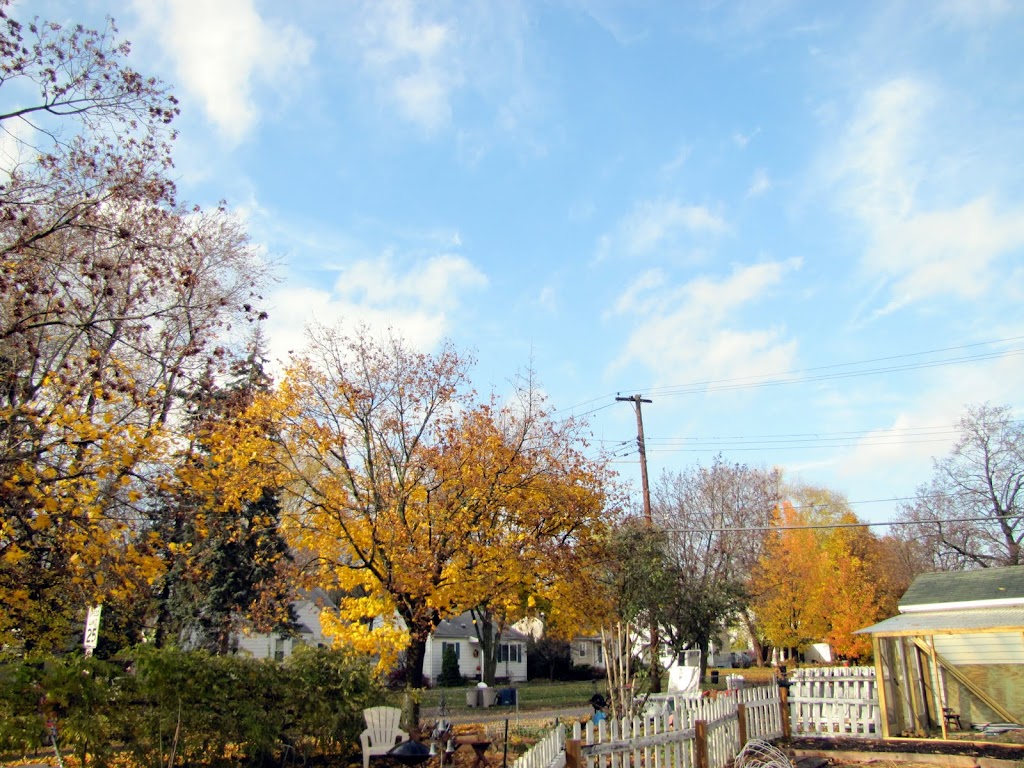 With it being colder (we saw a little snow yesterday!) I'm hearing a LOT of complaining. You'd think people would be used to November in Michigan by now? Sheesh! I feel no negativity- only a shift. I'm appreciating sweaters and socks and scarves. I'm feeling my mug of coffee with my hands and soaking in the warmth. We just have to shift with these seasons. So many act as though we are only observers, but we are truly participants. 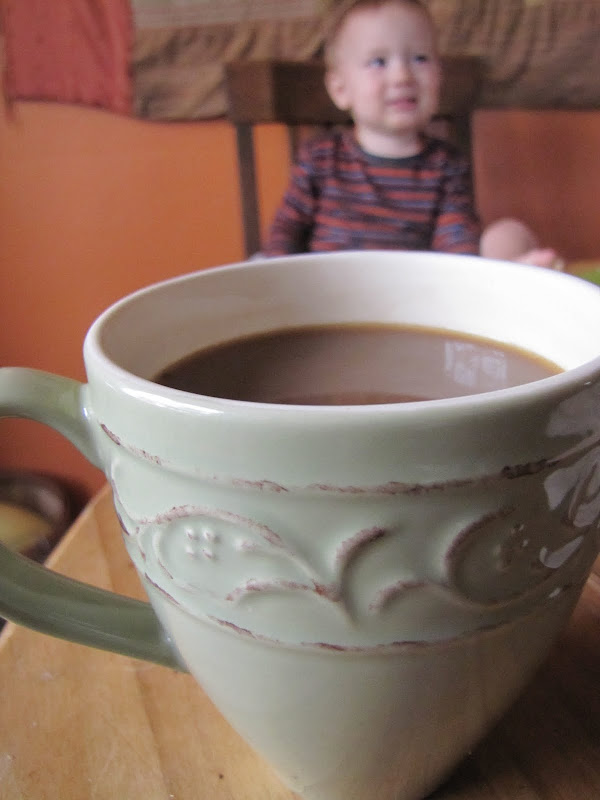 Perhaps that's the attitude I should adopt when it comes to this little boy of mine. This season is temporary- I need to try to be present and work through it with him, because it will pass and then we'll be on to the next thing. I know I won't look back with any bitterness. I love my sweet son! I love the slow days where I finally stop pushing back and leave my chores for another time in favor of a warm cuddle on the couch with him. I love his walk- steps have become noticeably surer just in the past week. He's practically running now. I love how he dances. He really feels music in his body. I love that I hold him close in the early morning, beckoning him to sleep and surrender. We are only like this for a short time, he and I. I'm going to do my best to savor it. 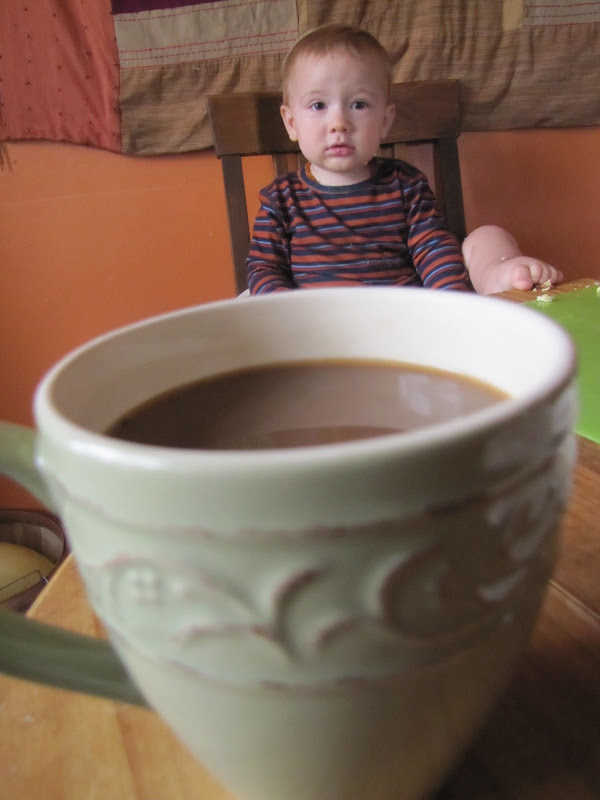