This past weekend was lovely. It was cooler than the past week, but it didn’t stop us from getting out. Today is rainy and Vera has a cold, so we aren’t at the brunch we planned on going to this morning. It sucks that a runny nose and a cough can change plans. With kids, though, snot gets everywhere and then they kiss and it’s just… well, we’re having a quiet morning at home instead. I’m determined to make the best of it, though, even though I really wanted to spend time with all the women there. I’ve got lots of catch up to do around the house, and I’ve got more seeds to start. Now’s time for peppers and eggplant and lettuce and some more herbs. I thought it was time to start tomatoes, but a friend told me it’s too early. I’ll have to look it up. Other than that I think that V & I will go walking, read, eat lunch together. I’ll exercise while she naps. Jeff will come home and we’ll all have dinner. Then I’m going out for my weekly walk/tea with a friend. I’m happy about the quiet today. It feels right.

—
Saturday’s breakfast was mmmm… I’ve taken to buying a fruit here and there lately because I feel like my baby wants it, and by March it just feels really good to get a burst of freshness. I guess it’s only been a grapefruit and some bananas, actually, but it’s sort of not in the rule book for us. Not local in the slightest… We have frozen fruit from last summer that we are throwing in things, but it’s just not the same! Anyway, not long ago my sister had some leftover fruit salad on her counter, and I surprised myself by attacking it like a ravenous hyena. I don’t think I’m deficient or anything, I’m not having any cravings, but raw food, especially fruit, seems really luscious to me these days. It makes sense considering what our meals look like lately. They just look like it’s March. Anyway, the breakfast was a treat, and I find it funny that something as simple as pancakes and bacon can feel like an event around these parts. 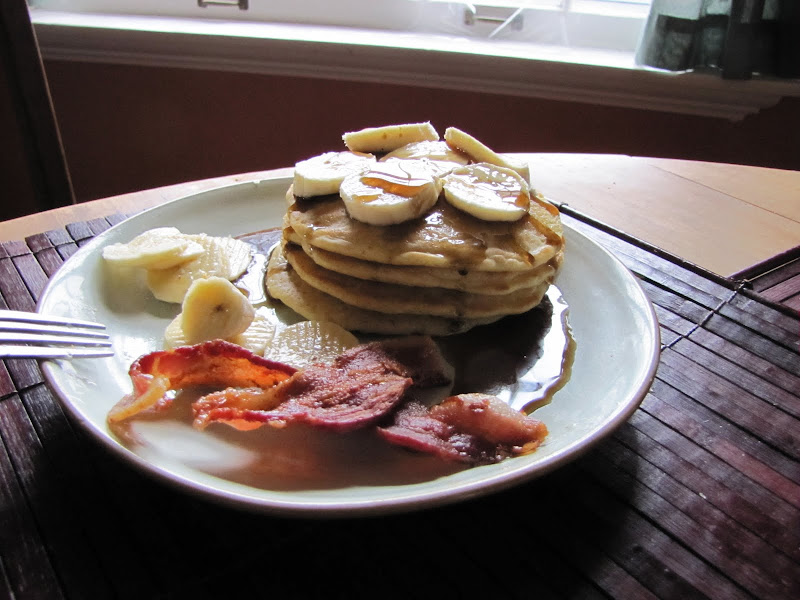 We buy our meat in bulk, and so while we have a lot to choose from, it’s not the endless well of bacon, ground beef, and chicken breasts that we used to have in the past. We only have so much of each thing. It’s good. It helps me to think about the actual animal and what we’re consuming. And it makes me love bacon that much more (who knew I could?). Anyway, I share this breakfast because each piece of it is rare for us. Bananas- we almost never eat anymore. Bacon- we only have so much, and I think we only have one package left until we buy meat again in the fall. Maple syrup- liquid gold. Thankfully it’s a product I can always get locally. It’s also a treat, though, because it’s sort of expensive and because I’ve been taught not to take it for granted. My grandpa used to tap his trees and give us all a pint or so, and so I learned about the process of making syrup and how much it took. My mom would monitor us as we poured it on our oatmeal or whatever, and she’d reinforce the "enjoy it, but don’t be wasteful!!!" mentality. Anyway, syrup is special stuff! I can’t help but gasp a little when I see people glop in on their waffles with total abandon, leaving puddles of it behind on their plates… And then pancakes- we could make pancakes any time, but I try to limit the amount of grain we eat that hasn’t been soaked or fermented first– especially if it’s in the wheat family. I have made pancakes by soaking the flour beforehand, but I have to plan for it, and I just didn’t this time.

Anyway, it’s not that big of a deal- we had pancakes with bacon and bananas… but it got me thinking about the idea of scarcity. I’ve talked with friends before about the problem of scarcity and how it causes all sorts of needless suffering, etc. There are those that believe we could basically eliminate this problem and in the process eliminate all the violence and suffering that accompany it. Take this farther and there’s a sort of Utopia- where everyone is provided for on the most basic levels, freeing them to pursue all kinds of spiritual/social/intellectual endeavors rather than working somewhat irrelevantly/needlessly in their lives (obviously this is not a capitalist society). It’s an interesting thought, surely, and I don’t doubt we have the technological capability- although I do wonder if we have the capability without further desecrating the planet and living outside of our means. Anyway, I agree that there are ways that scarcity is a problem- and should be fixed. People should not be starving on their own land. People should not be working so much and still not be able to pay for their basic needs. This kind of thing is needless and is evidence of exploitation. However, I’m also learning about the value of scarcity, too. If everyone has whatever they need, what keeps them from taking it for granted? It’s not that I don’t think people have the capacity to appreciate things they don’t directly work for, but at the same time I’m starting to think that in practice it doesn’t really happen. I mean, where’s the evidence that they would? People who work directly with what sustains them, or at least are close enough to it to see the real cost, are better able to care for those things. I think humans are simple creatures in that way. We care about what we can relate to and what we work for. Perhaps there’s a level of scarcity that is actually healthy for us.

I know that most people don’t want to grow their own food, or spend all their time with the most basic work of life. There are ways around it, so why bother? However, I’m curious about our need for it as a species. I’m wondering if there’s something that humans have lost in this mess of convenience that blinds us to a necessary level of gratitude- one that keeps us from countless forms of corruption. I am starting to understand why so many cultures/faiths see value in ritualistic fasting, etc. Anyway, I feel like the small way in which we’ve chosen to make certain things more scarce has actually benefit us. It’s helping me to see the ways that I took so much for granted, and still do. I’m wondering if it’s actually good for me to feel so treated by a simple breakfast that I could have easily bought at the nearest Denny’s (although it wouldn’t have been nearly as good!). How much further down this path do I need to go to really understand how much I take for granted?