My farming philosophy has changed so much over the past couple of years that it’s kind of funny to think myself a farmer. This farm is merely the container that helps the outside world (read: the reality of taxes) make sense of what it is I’m doing with my time. Yes, I work to produce food, but I’m finding more and more that I’m drawn to something a little less tangible. Do I want something that meets my needs and is viable for my family? Absolutely. Do I care about how human beings eat and about the future of our food? You bet. But lately I feel like I’m just kind of tapping into something beyond it, something that lacks a lot of concrete structure. It’s kind of exciting, I don’t really know where I’ll end up. I think I got here because I’ve failed so much… and when I say “failed”, I mean it in the kindest possible way. I’ll give an example.

Recently I decided that I really wanted to get some fall prep work done. Gardening in the spring is loads easier when you’ve put forth a little extra effort the season before. And, since the old garden that I had out at the house site is currently a pit ready to become a septic field, I figured I had better start thinking about where I’m going to plant in the spring. The house is such a work site, with projects everywhere. I wanted to remain patient and open, but my options have been fairly limited considering that most of the site is wooded (and we really don’t have the time or energy to clear anything right now), and the few areas that are still open are either a construction zone, or needed for parking, or being dug up, or holding earth that needs to be moved, etc. This presented a challenge, but I felt pretty relaxed and just observed and thought about it all. I saw that there was a long triangle shaped patch of earth that was right on the east side of the house that would remain untouched, and so I got to work making garden beds out of fallen branches and logs and the leftover compost from the microgreen operation. Soon I had to stop my prep work since I didn’t want it to get in the way of the siding. But I felt confident that as soon as we were done with siding we could clear the space and I’d finish my project.

Can you kind of see my vision? Now… scrap it! Hahaha! Turns out that we are now going to need much of that space for parking and a turn around, and the electric company needs to trench right through the middle of it, and the whole thing has to change. 🙂 I tell this story because it’s a perfect metaphor for how the past 4 years in farming has felt to me. I mean, really, think about it… there was the difficult work out at the treatment center, to my own farm, to healing from my concussion, to the fiasco we dealt with a couple of years ago (the crazy summer of push-push farming and then the dissolution of whole farm and all the grief we went through, then the rebuilding of my new farm), then the moving of the microgreens from place to place and holding it all together while we sold our house and moved, then thought we couldn’t build, and aaaaah, and then we could again, then we actually built a house, etc. Goodness. I sort of don’t know how we’ve managed it, but I think we just might be committed! Anyway, all this to say, the level of discouragement I’ve had to endure and the flexibility I’ve had to have just to hold this way of life together for us has been kind of amazing, in retrospect. In the end, I can only see it as a gift. I know way more about what we’re made of now. It’s also given me an opportunity to thrive in the face of massive amounts of failure- to find a yield in spite of it.

Now, I have revamped the program and farming design at the treatment center and it holds real promise and is gaining momentum and purpose daily. I have held together a modest business and built enough of a relationship with those I work with that I feel confident and competent and proud of what we’re all about. I have a peaceful home filled with happy people, and we are building our new house on 6 acres next to some of our best friends. It’s just so so good. All of that to say, I think that my vision getting knocked around really enabled me to see the reality of what wants to be. I don’t really mean that in the literal sense, like the forces above are designing my life or something, but there’s a qualitative difference in my perspective and the outcomes when I allow my environment and my limitations to have their say. Reminds me of an old post. I want what works, I don’t want a struggle. I keep coming into that idea more and more. In my farming work specifically, I’m starting to view it all less in an extractive kind of way and more about how to enter into a functional relationship with it all. I didn’t even realize I was thinking in an extractive way, but the more I work into relationship the more I see how influenced I am by consumer culture, even in my best efforts to combat it all. And, it turns out to be so much better than what I thought I wanted. I wanted neat rows of vegetables, but instead of that I’ve had to cultivate projects and refine my own ethics and mission. I wanted to reasonably calculate my yields and choose my rewards, but now I get to infuse each day with creative energy and work on gratitude for what I do have and for what happens to be.

Which brings me to the nannyberries. Who knew this beautiful plant existed? I didn’t until a few weeks ago when Milton and I were walking out in the fields at the Coop. We’re learning to walk and observe just for the sake of building that relationship I’ve talked about. We came upon this shrubby thing that still had some berries all over it, and Milton casually said “Oh yeah, those are nannyberries. They are edible.” I looked at them, kind of shrunken in their skin, and carefully tried one. Oh my. They are unlike anything I’ve ever had! Almost date like in consistency, sweet, caramely like figs or raisins but also just distinct and itself in flavor.

As you can see, the berry itself is fairly unremarkable by store standards. Kind of wrinkled, strange in texture, not a great seed-to-fruit ratio… but I *loved* them. I got downright giddy, and I can only attribute it to the context- the pure delight in finding something new, abundant, something that thrives here without our intense back-breaking management. Just here, being itself, offering a treat to the animals later in the season than most anything else around here.

I think about that sometimes, about how fickle our perception is. I remember the same phenomenon when I went dumpster diving for the first time. On the shelf of a store, a bag of oranges with *only one moldy one!!* would be downright disgusting- no way you’d buy it! But out of a dumpster? A gift from the universe! The humble nannyberry proves similar to me. In a field, on a deliciously sunny autumn morning, with one of my best friends, it was bliss.

It’s a good example of how I want… no, need my work to be. I no longer want to struggle, but I don’t mind working hard. I don’t want to occupy or extract more from my landbase than it wants to give, I want to develop into a relationship with it. I know I’ve got a long road ahead of me, trying to unlearn so many of the lessons from this culture’s sense of entitlement and ideas surrounding “success”. It’s a process. But I feel so sponge-like lately, so much that a simple walk in the woods can awaken a child-like curiosity that I’m not sure any of us were ever meant to lose. 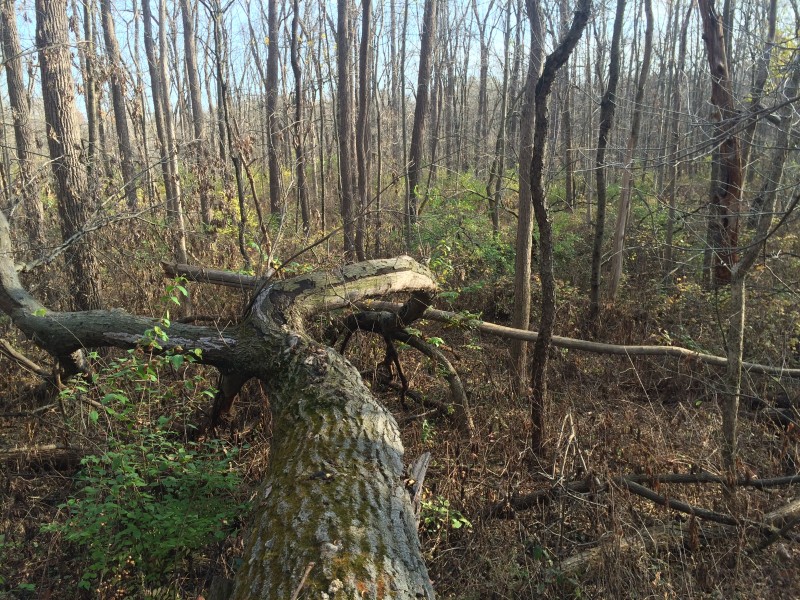 The poop log is a fallen tree just north west of our house site. Milton and I were feeling stressed and wound up about various things and decided to go for a mental health walk that afternoon. We stumbled upon this pretty sight, but soon noticed that the whole tree had been sprinkled with coyote poop. All up and down the fallen trunk, poop after poop. We were confused. Why would a coyote climb up here just to poop? Is it a message? Territorial? I thought they peed to establish territory… oh wait, I actually don’t know *anything* about coyote habits and behavior. Huh. What is this!? Anyway, I went on with life and just a couple of days ago we decided to go for another walk and visit it again. 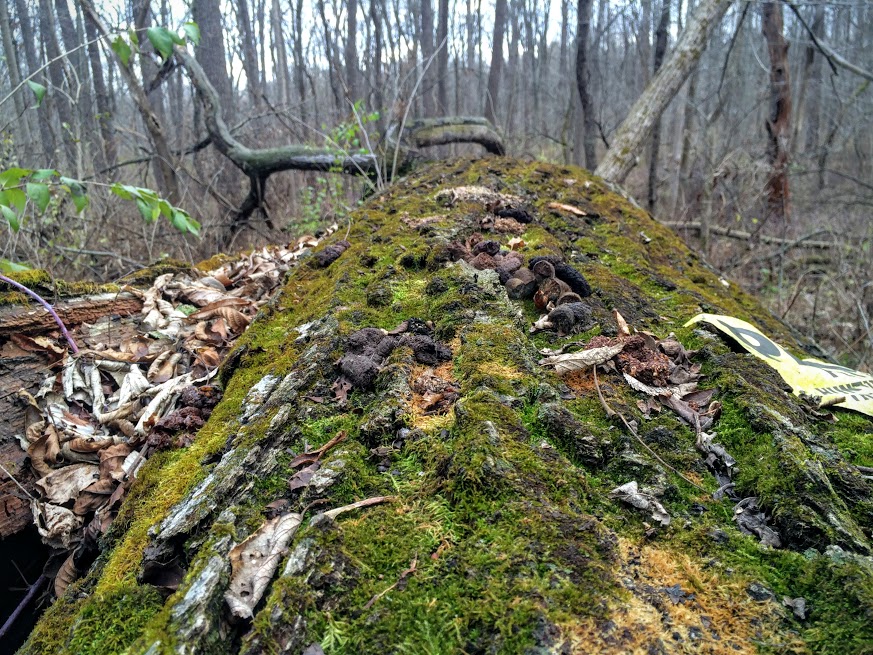 Sure enough, more, and fresh. We started to do some detective work. I briefly thought about googling it, but quickly rejected it. I wanted to just be there and wonder about it, to see where my own senses took me. We found fresh deer droppings very close by, so we thought that maybe it doesn’t do much to scare away prey. 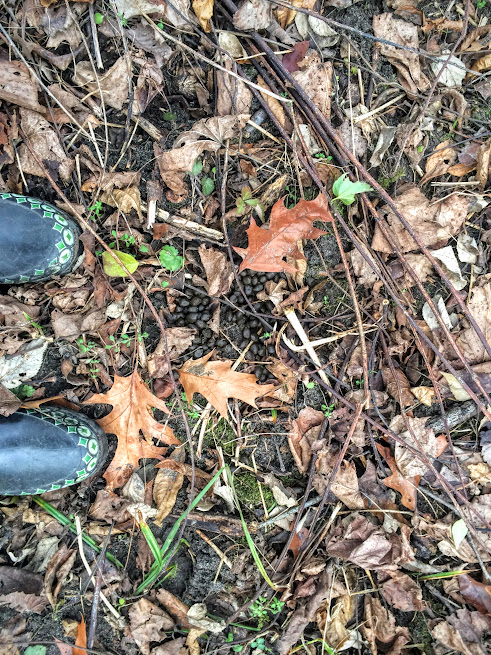 We looked all around and just thought about this place. We checked other fallen trees, and we saw that, if they were wide enough, they were all peppered with the same coyote droppings as the other one.

We kept exploring beyond that. 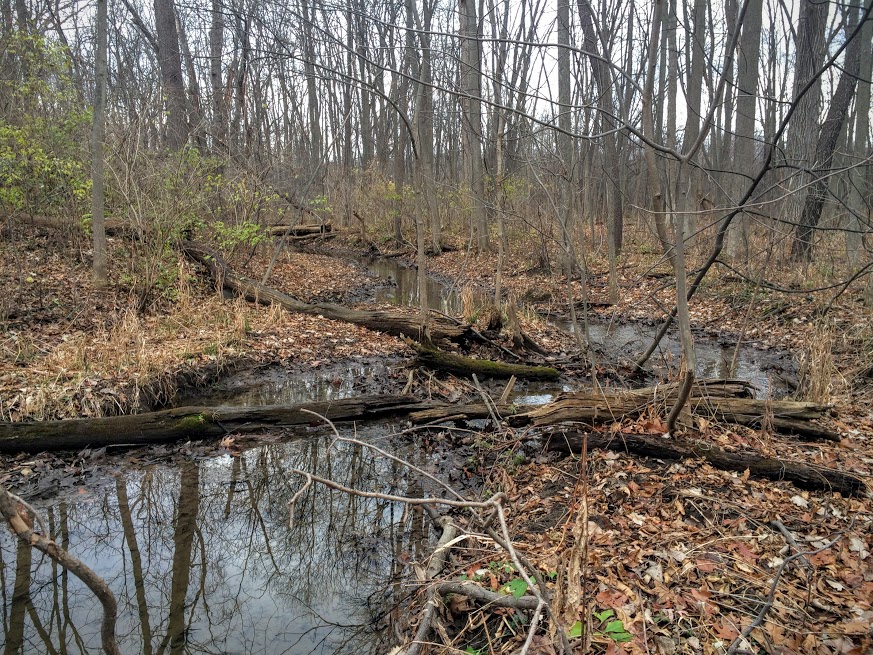 I saw a tree that I assumed had been shot into, but upon looking closer at similar holes in logs at my feet, I figured it was actually the work of a woodpecker. 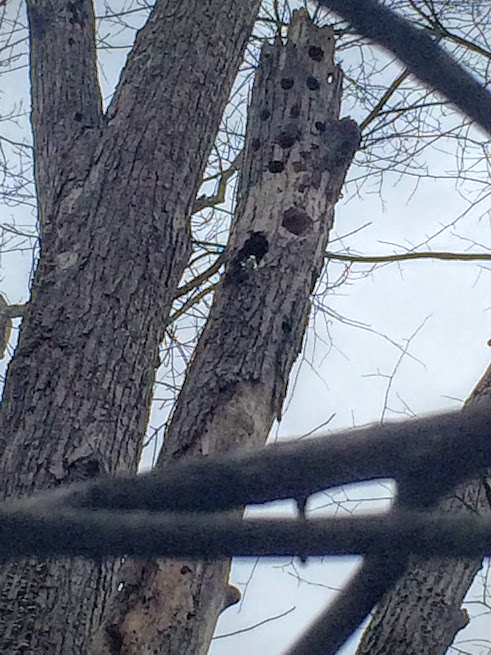 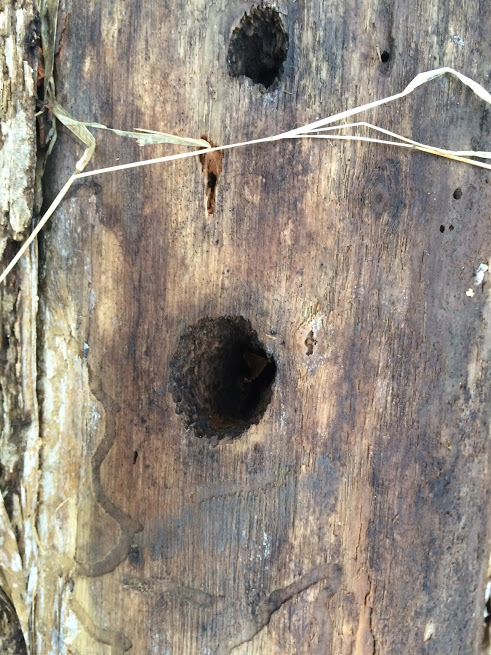 Then we discovered an old bridge! It was confusing because it was quite a ways off from the creek. 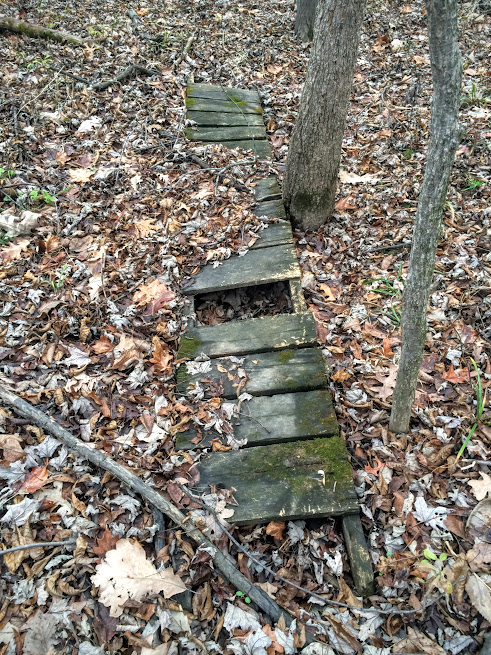 But when I looked closer I could see the channels branching out from the creek, probably supporting the overflow in the spring. I’ll have to go back to check when the water is high.

I’m such a newbie, I know. But I think I’m excited to be learning to put down my notebook and my assumptions that I somehow know better or that I should manage everything. I didn’t even think I was like that, but I honestly think that, if you’ve been raised in this culture, you tend towards this human-centric controlling way of interacting with nature. I’m starting to realize that I’m just a piece of it. I have to just keep checking in and being in the same place, just like I am with any of my relationships. We build the relationship up over time, often less through the facts and details and more through just feeling each other out and witnessing. I wonder if the development of a healthy relationship with this place will have less to do with my understanding of how it works than with my understanding of how *I* work within it.

*I think I’ll be doing more “walk in the woods” type posts, because I have more to share about even these two walks we took! Lots of good stuff out there, folks.