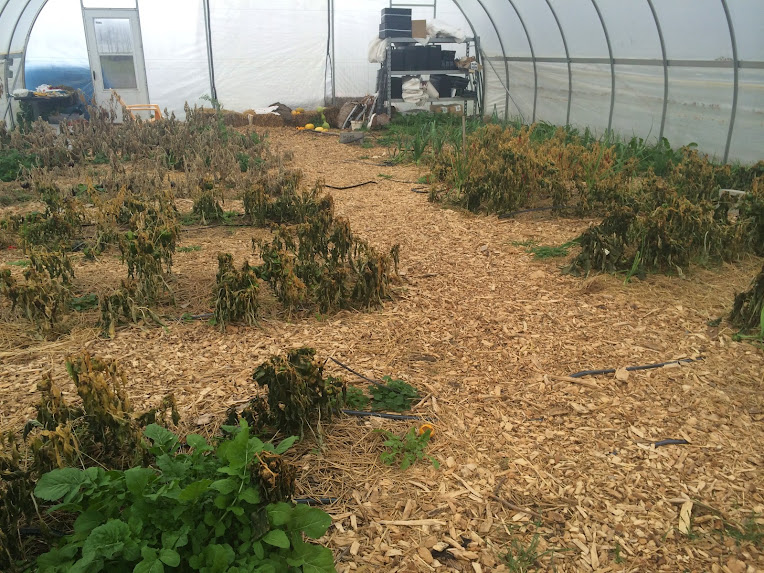 I harvested the last of the eggplant and peppers from the hoop house almost two weeks ago when they were killed by frost. Most of the eggplants themselves were in really good shape, so I gathered what wasn’t damaged intent on storing/eating/selling what I could. They kept really well in boxes on our front porch, with the temperatures being just above freezing at night. However, the weather has taken a turn and they had to come inside. This is likely my last few days with them and I figured I’d bust out a few eggplant features. 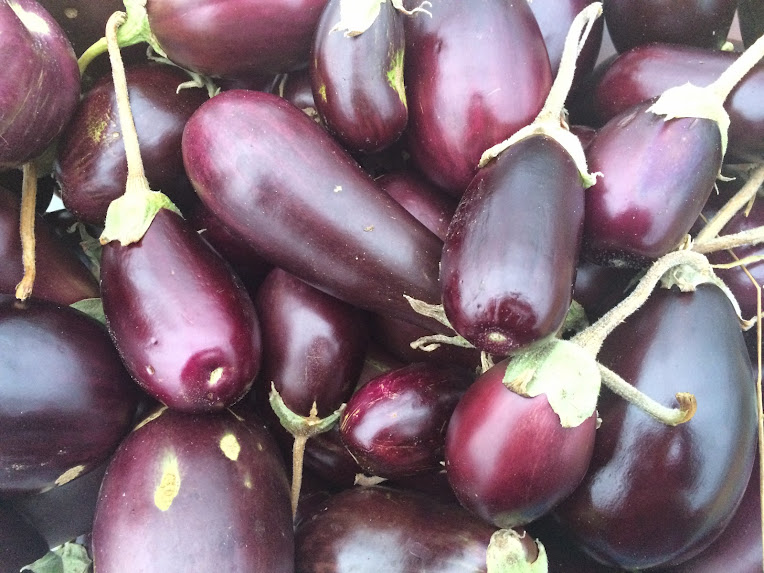 I really love eggplant. It seems to me to be an under-appreciated vegetable. I am convinced this baby is so versatile and delicious that everyone should love it, but I’ve tried to sell it at market enough that I know it’s not a crowd pleaser. Perhaps I won’t change the world on that front, but maybe I can convert a few. It’s funny, when people ask me what to do with it, I say something along the lines of: “Uhm, anything! Just cook it up and eat it!”. I then try to scrounge up some concrete suggestions when I see the strange and quizzical yeah-freaking-right look on their face. So, I figured I’d just document my own process here, in the hopes that it would inspire others to give this gorgeous veggie a little time in the spotlight.

I should preface this by saying that I love cooking, but I don’t love tedious, time-consuming, or inaccessible cooking. I like it simple. I like it hearty. We affectionately refer to many of our meals as “food piles”. I don’t stick to recipes, they fail me and make me doubt my instincts. I go for what feels good, what’s available, what’s good for us, and what gets it all in my kids’ bellies. I also make sure to season everything well. No one should need salt after I’m done (although Jeff may disagree occasionally…) I’ve definitely built skill in the kitchen, but mostly I think that good fresh food is just speaks for itself. Anyway, classics like eggplant parmesan are delish, but I have pretty much no patience for dredging and frying and saucing and baking and all that stuff. Too fussy. Too many expensive ingredients.

Tonight I made eggplant two ways, but with very similar process. I chopped the eggplant into smallish cubes and put it into two glass dishes for baking. I turned the oven on to 400 degrees. To the first dish I added onion, 7 or so garlic cloves (whole), a good dash of salt and pepper, a can of tomatoes, a few sprigs of thyme and one whole sprig of sage (just threw these in whole), and then I doused the whole thing in a bit of olive oil. To the second dish I also added chopped onion, several whole cloves of garlic, salt and pepper, but then I added many glugs* of balsamic vinegar, two heaping spoonfuls of sundried tomatoes in olive oil, and a whole can of green olives. Then I put them both in the oven for about 45 minutes, stirring them every now and then when I thought about it.

*“glug”- the sound some vinegars and oils make when leaving the bottle. Also an imprecise measurement based purely on said sound. Cannot be converted into actual liquid measurements, because that would be missing the point.

Wonderfully simple, don’t you think? Next I got started on the grits. I love cheesy grits, and I thought they’d go really nicely with dish #1 for dinner. I usually start with 1:4 ratio grits/liquid, usually a combo of water and milk. Today I had a lot of whey leftover from making yogurt, so I used that with equal parts milk. Added a good handful of salt and pepper to the liquid, brought it all up to a boil, then back down to a simmer until thickened. Then I added a hunk of butter, a little cream, and a cup or two of shredded cheddar cheese. 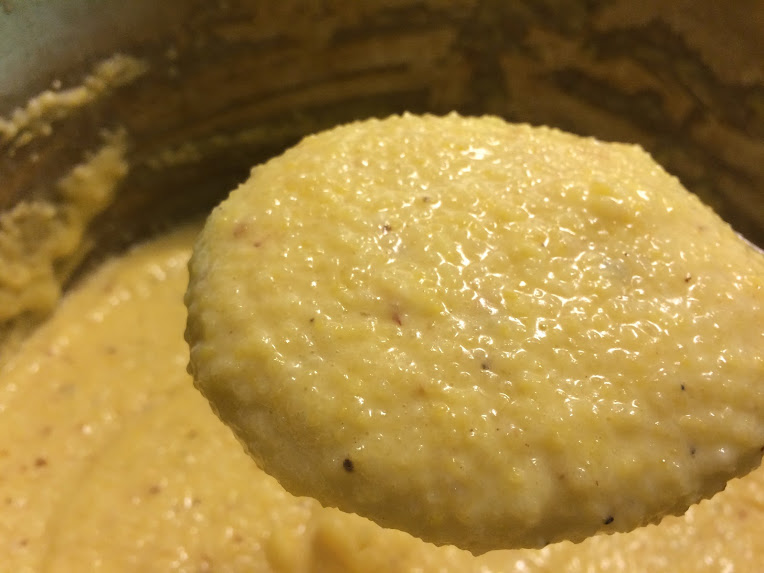 I also added a good handful of blue cheese crumbles to this. I know a lot of people who don’t like blue cheese, and I get it. It’s strong stuff! But I find that it adds a really great undercurrent of flavor in cheesy dishes when used to subtly boost the existing cheesiness. I do this with mac and cheese with great success. Really, it works and is great, and people don’t even register blue cheese. This really could work with any kind of stronger cheese you might have on hand. It pays off, really. Anyway, at the very end I always add two specific things, which could be omitted, but I think it makes the grits perfect: several glugs of fish sauce (like you would find in the Thai section) and a few squirts of sriracha. The fish sauce just adds this savory umami kind of thing, and the sriracha adds peppery warmth that really works with the corn and cheese. I don’t add enough to make it spicy, it just makes it feel warm and adds great flavor. My kids have little tolerance for spice but I do this all the time and they love it.

While the dish was still really hot, I chopped up a huge handful of the pea shoots I grow. I stirred them into the hot tomato eggplant mixture until it relaxed into it, barely cooking and adding a lot of nice green.

I fried up some good quality kielbasa slices, and assembled it all together in bowls. Easy peasy, and everyone loved it!

Dish #2 was put into the food processor and pulsed together to make kind of a warm tapenade. I just put this directly into pint jars to keep for later. We’ll either just snack on it with crackers or I’ll turn it into another meal. 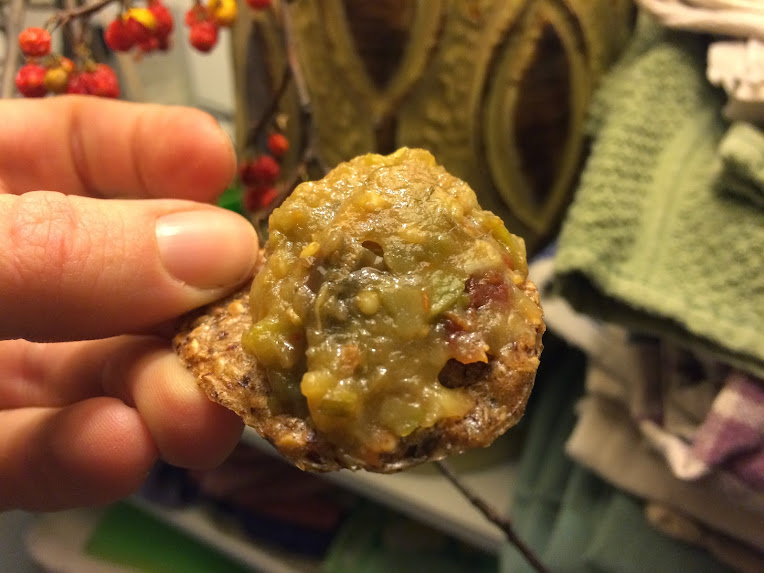 Anyway, I’m not done exploring the wonders of eggplant here. I have a dozen or so left to experiment with, so I’ll share again soon.