This weekend was fun and busy. We’ve been counting on this rototiller from my neighbors that we used last year, but it was in need of servicing before we use it this year. We’ve been waiting for it to come back, but the weekends are flying by and we are itching to plant some things and get the beds prepped and filled. So Jeff just started manually tilling just the areas we needed and put the beds together. We’ve still got a few to go- today I’ll likely go out there and till up some earth before he gets home from work. We also re-potted some of our seedlings- some of them had started to suffer! I’m really such a newbie, each step is such a learning experience for me. 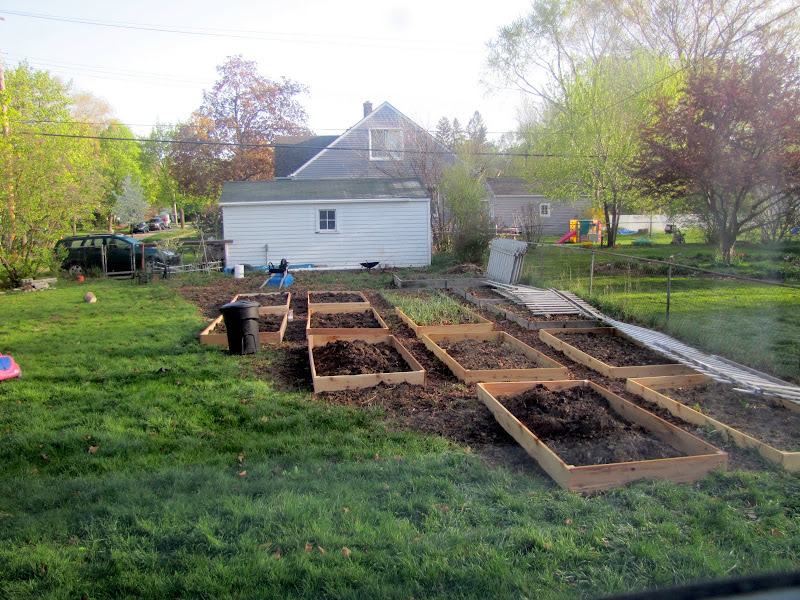 We are just learning and making mistakes, so we’ve got to be flexible. The mistake we’ve made this time is that we only eyeballed how the raised beds would fit… now, because of the space we need for the greenhouse and the walkway we’re looking at having to move the beds about 3 feet towards the house- that last row of 5 raised beds would be touching the greenhouse if they are 8 feet long not allowing for a walkway to the chicken coop. Lovely. I doubt we’ll actually move all of them, seeing as how they are all partially filled with dirt and staked into the ground (and one is even planted up with garlic)… it’s just not going to happen. So. What do we do?

Originally we had a little over 600 square feet of garden in this plan (not counting the greenhouse, potato boxes, or perennial/herb space on the opposite side of the yard). That was nineteen 8×4 beds. We decided to go back down to eighteen raised beds, to keep a cleaner diagonal between the garden and the yard because we’ll be putting up this little picket fence to separate it. So that brought the total down to 576 sq ft. Pictured here are fourteen raised beds. That’s 448 sq ft. Gah. Jeff and I will have to meet about it tonight. Maybe we can just do one big long raised bed along the back- eliminating the need for the walkways between them, and enabling us to cut the length down to four or five feet across…

Another thing we did recently was move those pavers we had. Originally they were around the trees in the front yard, but we moved most of them to make four raised beds in the old garden. We replaced the stones with cedar for the beds, but moved the pavers to border the new perennial herb/berry/flower garden space on the other side of the yard. I think it looks nice. Now we just have to fill it all with dirt and plants! I’m so excited. 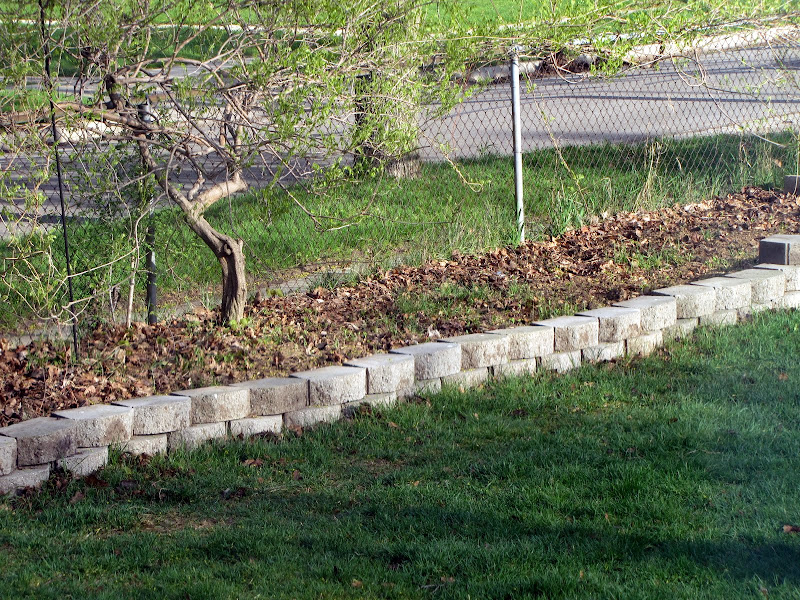 But then I think about the very neglected front yard… 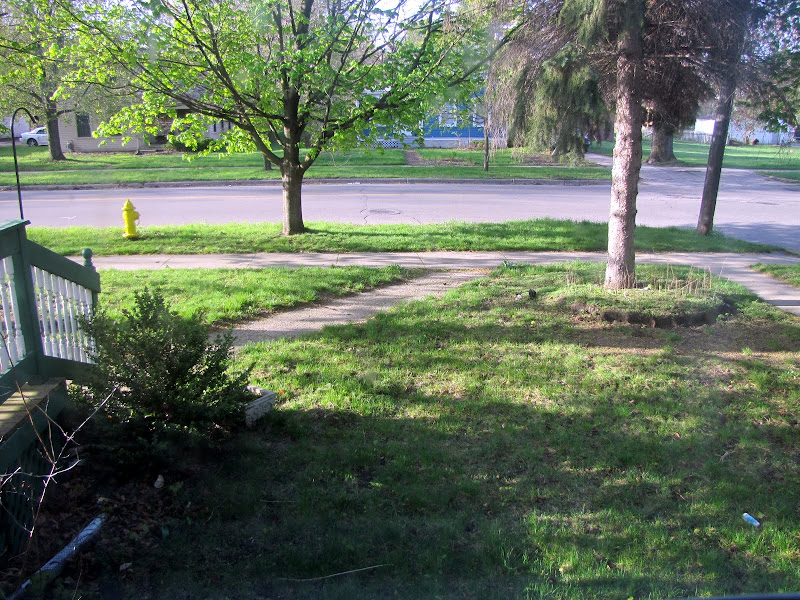 That’s the most sun it will get all day (the sun will move around a bit, but it’s mostly shaded all day long), and the leaves aren’t even fully in yet. I’d like it to be gardened up, but I don’t know anything about shade gardening. Anyone? Ideas? My only thought is that I’ll go visit the native plant nursery and buy a bunch of shade stuff (hope for edibles, but anything will work!) and plant it all up when I get the chance.

Messing up on these little things makes me think of my two guitar lessons that I got in high school. I was self-taught, and I got these lessons as a present one year for my birthday. I went, and I was frustrated almost immediately with my lack of knowledge in simple areas and how that clashed with my abilities in others. I’d learned so much out of order! I was messing up on simple things, but I also felt like I was seriously lagging and was somewhat bored. Anyway, I expressed this to my instructor and he said that with things like this, you have to mess up. He said messing up was part of the process, and that it was really important. It lets you know when to step back, slow down, think about it, repeat, repeat some more, etc. He told me to "Mess up big". That always stuck with me- so much of my life has been just a series of "mess-ups" signaling me to take the action I need to.

Jeff and I have had major luck with freebie stuff lately. I really am starting to believe in the exchange of energy- and not just in a sort of out-there general way, but in a real almost karmic way. The more stuff I give away and the less I think in terms of money, the more stuff that I want/need falls into my lap for little to no money at all. I’ve been giving away tons of stuff through my purging efforts, and I’m seeing the fruits of that in my own life; not just with clearing out the space in my house, but also with the return of goods. We’ve been resolved to not buy new for a few years now, but there are still a few things that we get. Wood is a big one- though we’ve talked about doing more scavenging and repurposing in that area. Anyway, there’s like random electronic things, tools, wood, etc, that we still buy new. Recently though, I’ve wanted a little cart that folds up flat so that I can go to the store (or more specifically to pick up the raw milk for myself and a few other families each time I go- it’s hard to carry four gallons of milk and corral a toddler!). It’s kind of a specific thing, so Jeff was going to buy me one from a hardware store but he hadn’t gotten around to it. Then he found this sitting out by someone’s trash. 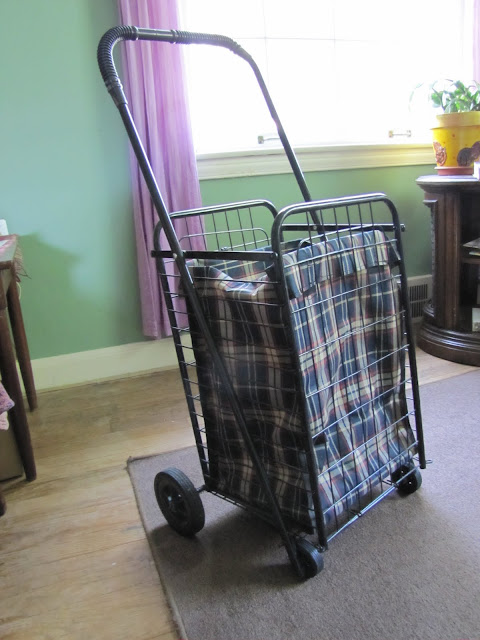 It’s perfect. It even had an order form from our raw milk cooperative in the bottom, so it was used for the same thing we’re going to use it for. So awesome! I’ve scored some other cool things recently, but I’ll post about those another time. This was just fun because it was something that was actually on our list of things to buy. When things like that happen I take it as a sign to just hold out on going to the store for stuff we "need". It will likely fall into our laps somehow. There’s just so much stuff out there, we really don’t need to contribute to the needless demand for more. An example- not too long ago we decided that we needed a trash can. We only had one that was metal and had no lid. It was perfect for shop stuff, but not so great to keep on the side of the house. We bought one. A few days later we got a call from Jeff’s brother offering us their perfectly good trash can, out of the blue. I guess their neighborhood was giving them all this new kind and they needed to get rid of their old ones. We kind of slapped our foreheads on that one. And now, with this little cart, it’s just even more proof that the universe provides. ﻿