We've had an eventful few days. I've been working my butt off around here, and it still feels all unraveled. Such is this life I've chosen. It's like cleaning out a closet. It always looks its worst just before it all gets tucked away. Speaking of cleaning out closets, I'm looking forward to this colder weather pushing the projects indoors. I have fun plans! I am longing to do work on my new crafting space, but for today I'll have to stick with green tomatoes and sauerkraut. 🙂 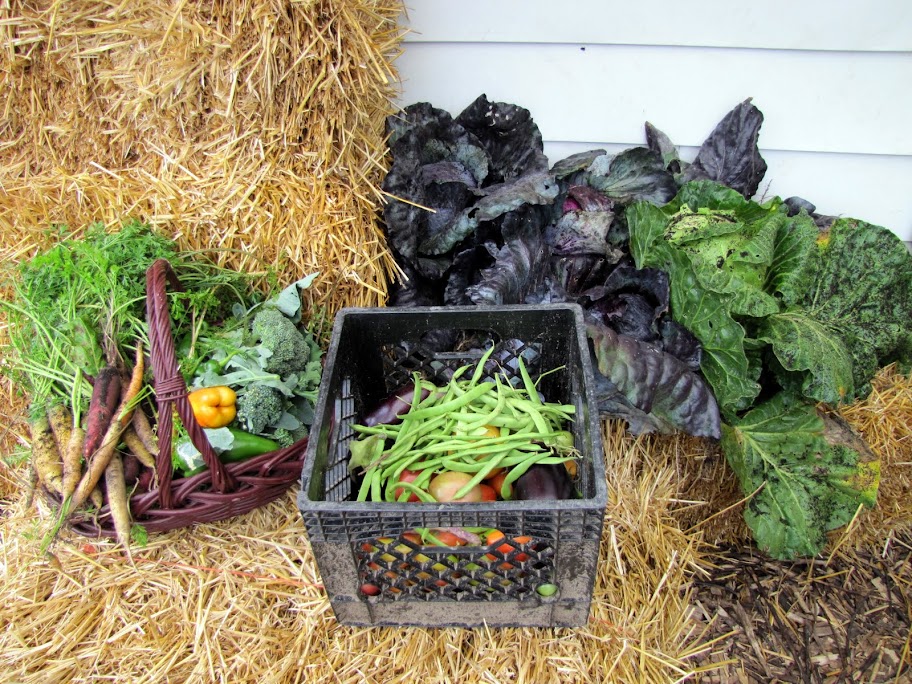 I managed to do a DITL. I haven't done one in 3 years!

In other happenings, we've had a major chicken switcharoo around here. I'll start at the beginning. We got 4 chickens originally- two from an auction (before we knew better, those places are crazy!), and two older birds from a nearby farm. They all got along just fine and were laying well! Some days we'd get 5 eggs from the four of them! But we knew we wanted a couple more birds, which is when we got Odette and Little Yellow, late last year. They just started to lay in the winter, and we got a good bunch of eggs for a few months, but then it all dropped off pretty dramatically. We investigated, and they were all physically laying, just not very often. At best we were getting 3 eggs a day, for six chickens. Then we lost Mrs. Peacock. Then we notice that Ms. Scarlett has a swollen behind. And our barred rocks were getting kind of old, too… So we add 4 new peeps, giving them a crate to get space from the big birds (we set it up with a small enough opening to let them in but not the others). Days go by and they were not integrating. I just figured they would reassign the pecking order and they'd be out on the roost with the others soon enough. Not happening. Then, two nights ago I discover one of the peeps totally pecked to death. Yesterday we acted fast. We butchered Ms. Scarlett and the two barred rocks, and re-homed Odette and Little Yellow (because they are still good layers and likely have a few more years in them). My sister was over and had wanted to kill a chicken, so we kind of sprung it on her and she was a really good sport. I did the first one, then her, then Jeff. We sent her home with the chicken she killed, and I think she feels good about it all. The little girls even watched most of it, and they were very curious but overall were just fine. It was an interesting day. Soon we'll get some more new peeps and have a new flock that we'll hopefully keep for a few years.

I learned some big lessons here. First- don't adjust the flock. It worked well for us before (and by "well" I mean, they didn't peck each other to death). What I didn't realize was that their laying, or lack thereof, was related to the adjustments we'd make in the flock. It stresses them out. I think now we just won't make those changes. We'll start with a full flock, and if we aren't getting enough eggs, then we make another harvest for stewing meat and just start fresh. It's a little weird being a person that kills chickens from my own backyard, but I'm strangely fine about it all. I'm an animal, and I'm a farmer in my own right, and I'm getting in touch with that stuff now. Plus, watching the kids have authentic emotions about the whole thing is just really enlightening. They haven't been told that our food either is just a slab of meat or an anthropomorphized pet that we need to grieve over. It's so imbalanced. We can respect their lives and consume their bodies. Fancy that. We all said blessings and thanks before each kill- the kids too. It was intense and serious and… fine. Like Jeff said yesterday, there's a lot of life around here, and so also a lot of death.