It's a chicken. With red eyes. So says Vera, who painted it. I was immediately interested in her perspective, since her paintings and drawings are usually scenes or whole figures, not just a portrait of a head like this. I asked if someone had taught her to do a chicken like that or if she'd seen one done this way. She said no, but added "Well… I didn't really know it was going to be a chicken until after I painted it." Which made me want to squeeze her because I have always just sensed that she's an artist. The ability to create and then to allow the art to just happen and become something you hadn't planned? I just felt like I learned something new about her, but also like it confirmed something I already had a sense of in her. She keeps asking me if we can draw together. I can't think of a better reason to get back into my own art than because my almost-6-year-old (SIX. Can you believe it?!) wants to share it with me. <3

Other highlights: She's doing really well at her little school three days a week. I'm completely in love with it, too. I was actually hesitant to send her this year, but was encouraged to try. I'm so glad we did. I will have to write more in depth about our schooling philosophy (or lack of it, really). Miss V has lost two teeth. She does believe in the tooth fairy, however she has determined that there must be one for every local area rather than one for the entire world. That's just simply unrealistic, you see. I took the below picture of her before school one day, because she just looked so big! The clip on earrings surely had something to do with that. We're working on giving her responsibilities in the house and also on helping her stay patient with her little brother. She continues to amaze me with her sense of conscience. We were singing that Christmas song "He's making a list, checking it twice! Gonna find out who's naughty or nice…" And she stopped and looked up at me thoughtfully and said "Um, mama, I'm just not sure if I've been good or not." I reassured her that she is a very good girl and asked why she might have doubts, and she said "Well, you know how sometimes I fight with you about stuff?" 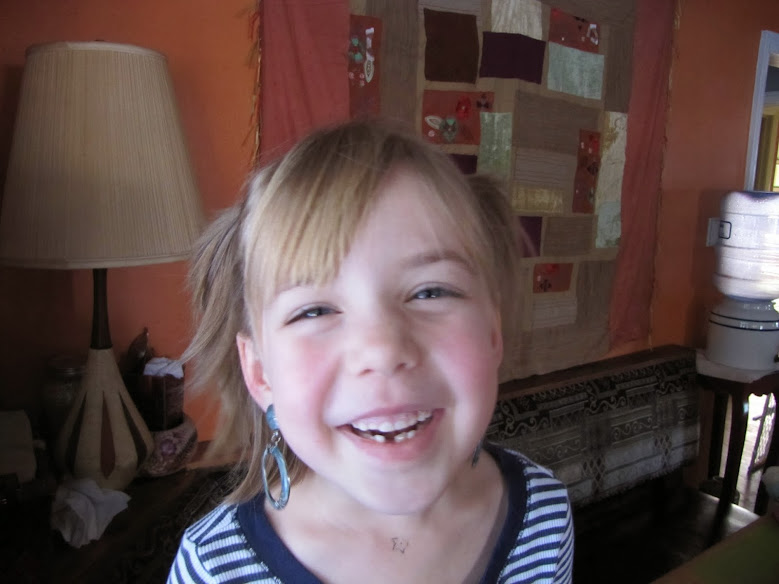 Asa has been wonderful and really coming into himself. He's amazingly cute, which I think is the universe's perfect and knowing timing because he's also incredibly mischievous and frustrating. He's sneaky and he LIES! I can't believe it sometimes! He will tell outright untruths just to get double the treat or whatever it is that he wants. It's increasing in frequency and Jeff and I are finding it hard to know what's what at times. This caught me off guard because his big sister is honest as can be. I don't even think she knows how to lie. There have been times where I or someone else has been sure she's lying about something, and it's always a misunderstanding or something and I end up having to apologize to her. She's got integrity. Asa, on the other hand, is very probably lying if you suspect him. He feels great remorse and really hates to hurt anyone or do anything "bad", but when it comes to that thing he wants, he'll say what he needs to. He's smart as a whip, and can break into our computers without a problem. I'm pretty sure he's just a mini-Jeff. Like, the other day, I came downstairs to find him at his papa's desk, which has two monitors for his work and stuff. Asa had managed to turn it on, open two browsers (one on each monitor, of course) and find Minecraft videos on Youtube. He looked happy as could be and explained that he was simply watching a video. This kind of thing happens all the time, and it baffles me. This photo was taken during a fairly ordinary moment. He was pretending with Vera to be a baby monster in a highchair. He's also on the phone with his grandpa. Cute, right? It's his strategy, I'm sure.

Asa's latest manipulative tactic is to tell me that he will later "dweam about cwying" if he doesn't get his way. If he's happy with me he'll say something like "Mama! I dweamed about kissing you!"  He also sings a lot, has excellent rhythm, and makes up lyrics to existing melodies. He snuggles like crazy, and will wake me up every morning by crawling into my bed and touching my face all over, planting delicate kisses all over my face and arms while saying "Good mowwwwning mama!" Sweetie pie and a stinker, all rolled up in one.