Vera already has very good taste in music. Yesterday she was singing: "Baby don’t worry, bout a fing, cuz every little fing, is gonna be awwight!" then she paused and thoughtfully said "I love Bob Mawwey".   <3

—
How Asa, even though he’s so very small, has such a personality. He’s very dramatic, going from fine to hysterical in a matter of seconds- crying like we’ve all just betrayed him. He also does it on the other end, too. We can make him laugh hysterically- like practically guffawing. It’s adorable. And Vera makes him laugh like that all the time- they have some kind of an inside joke or something. I wonder if this is a window into his personality… And the lip pout! It’s almost too cute to describe. 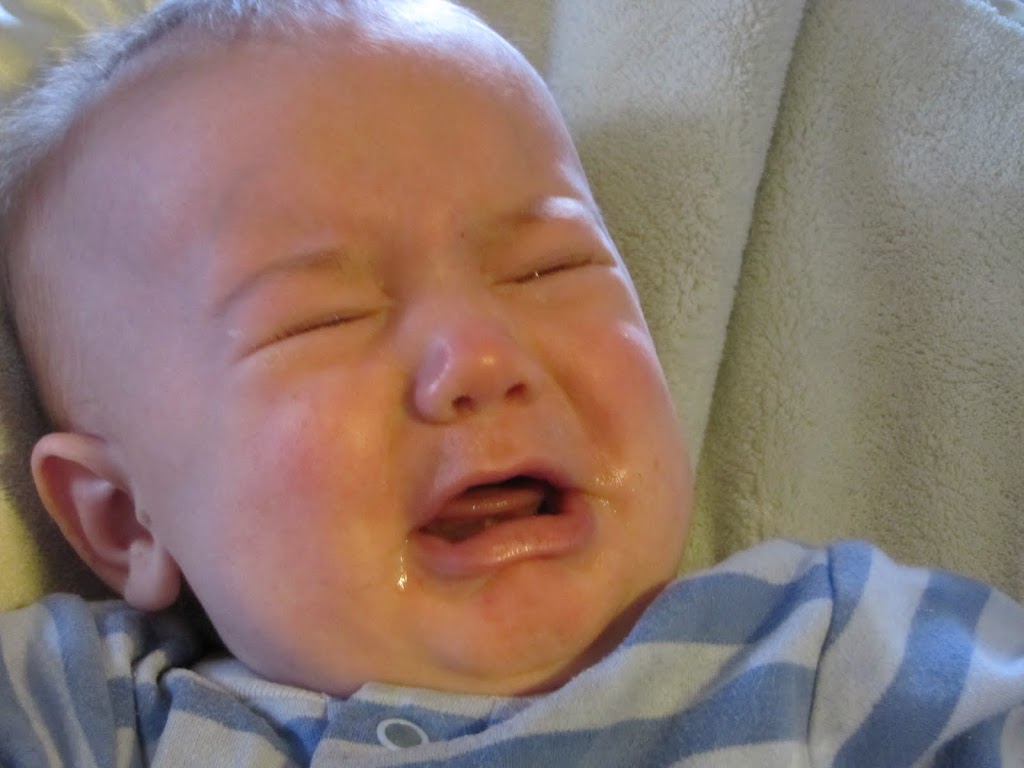 I caught it! Don’t worry though, he was promptly swooped up and cuddled and is happily chewing on his fingers now.

He’s ticklish- more than Vera was at his age. I just have to give him a little squeeze or a light touch with my fingers and he’s laughing.

Vera wouldn’t stop running into the road and scaring the pants off me, so I just told her the truth. I said "Vera, you can’t go in the road without holding Mama’s hand because cars are big and scary and sometimes they smoosh people. I don’t want a car to smoosh you, that would make me sad." We’ve had no incident since. She often repeats this, warning others of the road’s smooshing potential, and I can’t say that I mind. If there’s one thing I’m resentful of in this world, it’s that there are so many man-created dangers out there. I can’t let my two year old run around without worrying about big metal boxes hurling themselves down a slab of concrete… Anyway. Lately she’s calmly said "Bye Papa/Mama. You be careful. I don’t want the cars to smoosh you take you away from this world, cuz then I be sad. You be careful." Talk about breaking our hearts in one swoop…
—

I don’t want to forget how smiley Asa is when he first wakes up. Like he’s so happy to see you, all while his eyes are still adjusting to the light. And he smells so good, too. Like "sweety baby", as his big sister would say. 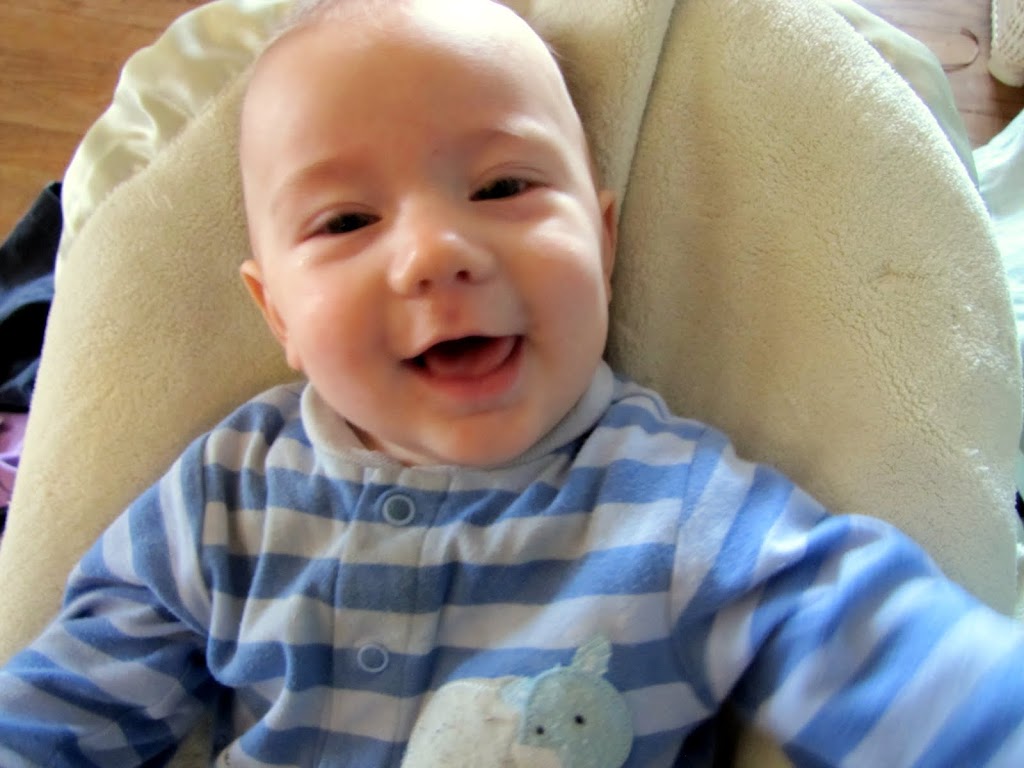 —
I don’t want to forget how in love Jeff is with these kids right now. With Asa it’s a very sweet and basic love- he’s such a little baby. With Vera, though, he often will reflect with me at the end of the day- just about something she did or said. He’ll often put his hand on his heart and make this face… like he’s so touched to be her Papa. It kills me. People sometimes say that kids will make a relationship worse, but not in my situation. It’s certainly brought on new stresses, but overall it’s just helped us to see what’s important and helped to solidify our values. And I have to say, watching this guy I fell for fall in love with our children… it’s brought my love for him to a whole new level.
—

Vera is quite the artist. She loves to color and paint, and she’s just started to make shapes resembling people. Like a big circle with lines coming off of it. So fun. 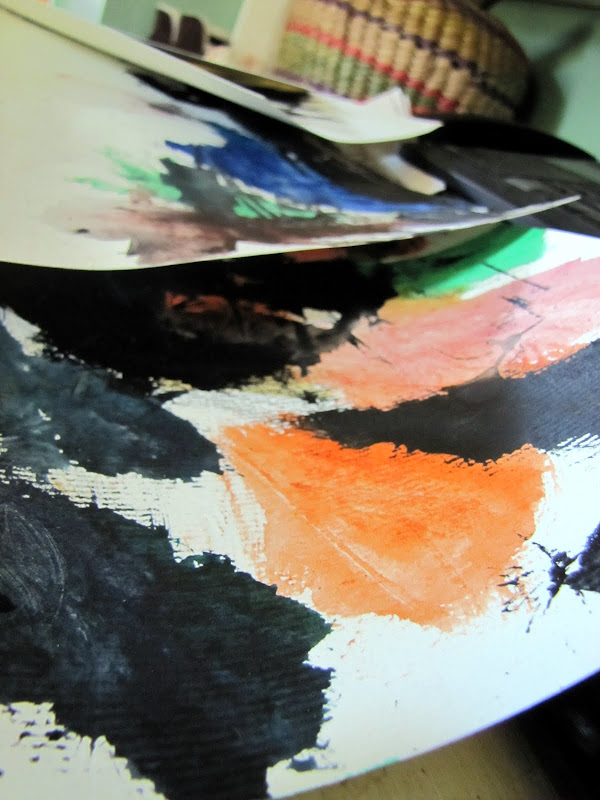 Tuula is also drawing awesome pictures. The other day she slipped on a magazine on the floor and bumped her chin on the coffee table. She freaked for a minute, said she wanted her mama, but Gretchen was a few hours from coming back. So I just told her to draw a picture to tell her mama what happened and how she felt. She drew the most fantastic picture- a BIG head with eyes and a really wide squiggly mouth, hair, stick limbs. Then she drew the magazine off to the side, and the coffee table, and then below the circle of the head where her chin would be was a little scribble, and she said that was the boo-boo. It was a great picture- I only wish I had photographed it before Gretchen took it home.

Oh, and Max is just starting to walk, just in the past few weeks. He’s starting to choose it over crawling. He’s also just started to sign a bit- he’s doing "more" and "milk" and "all done". Anyway, that’s what I’ve seen. He also gives the sweetest kisses right now. He purses his lips against your cheek and blows out a little. Love it!

—
Yesterday Vera was licking Asa’s head. I found myself saying "Vera! Stop licking your brother!"… all the while grabbing for my camera and taking a quick picture. I’m constantly surprised by the things that come out of my mouth these days, and also by the things I stop to take pictures of. 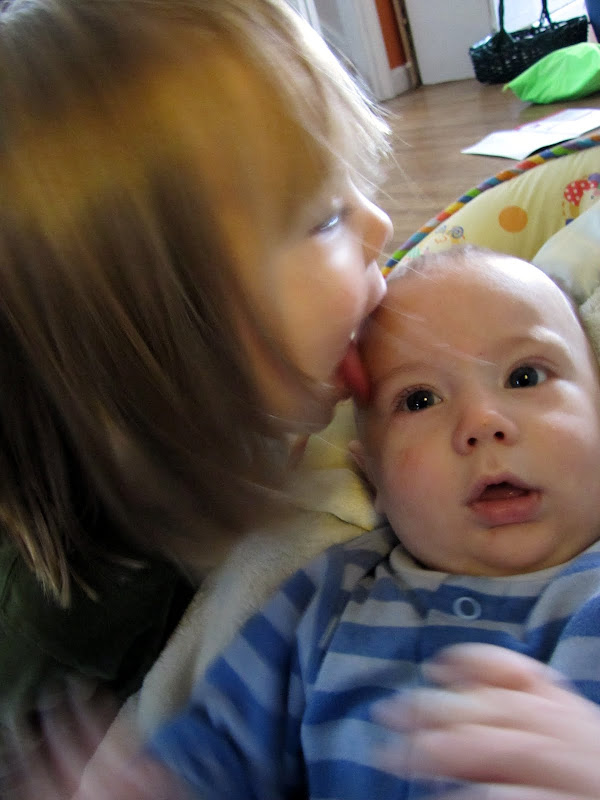 Vera also has this totally wild made up language. She has these hilarious spurts of gibberish. Like, she saw the picture above and said "Ooh, that’s me and Asa and I was a-wobbalin him!" She calls him a "Bali coingy", or a "googly googly sweety baby!" There are so many more, but that’s all that comes to mind.

—
That’s all I can think of for now. I’ll likely be doing these more often, because time goes by so fast, especially with these kids.