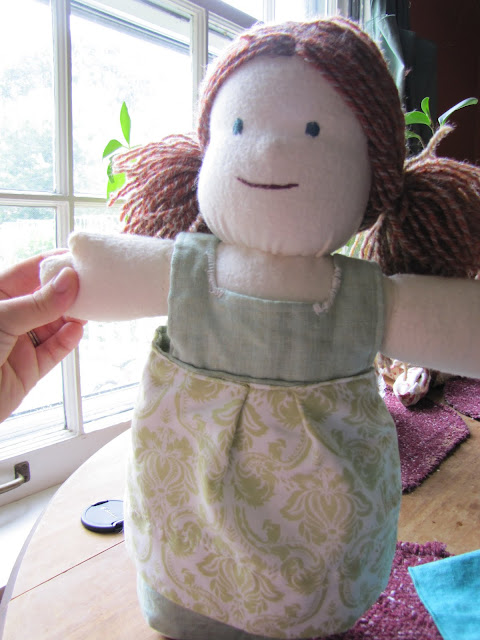 I started out using the basic idea here. I made my own pattern, making the doll a little stockier than she did in her tutorial. I wanted the doll to be about 15" head to toe, so I envisioned the body being about 10" and the head about 5". I made my pattern pieces about a 1/2 inch larger. Here are my pattern pieces: 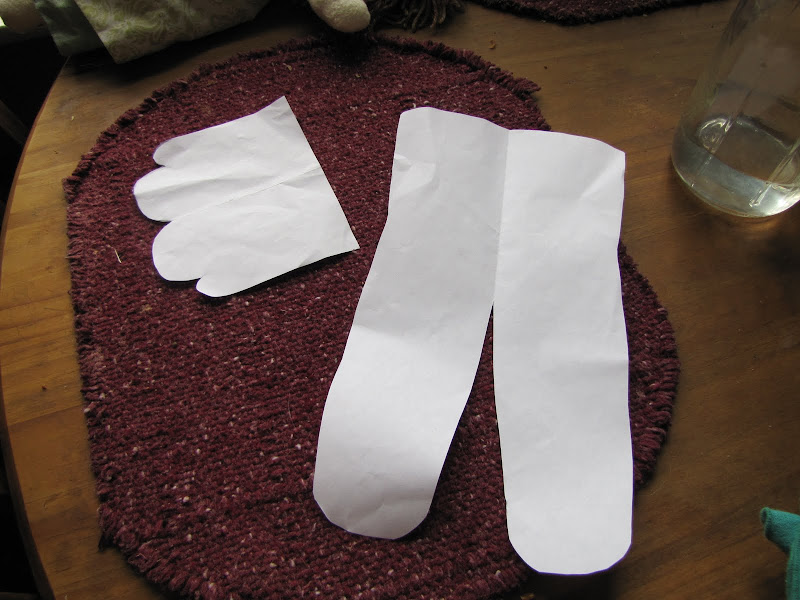 So I think my body ended up measuring about 10.5" x 5.5". Then the arms were about 2.5" x 4.5". I had this beige flannel material to use for the skin, and I cut out two of each pattern piece. Then I stitched the two body pieces together on my sewing machine, except left the top totally open, and also the area where the arms were going to fit in. I did the same with the arm pieces, leaving the ends open. Then I turned it all inside out and stuffed it. 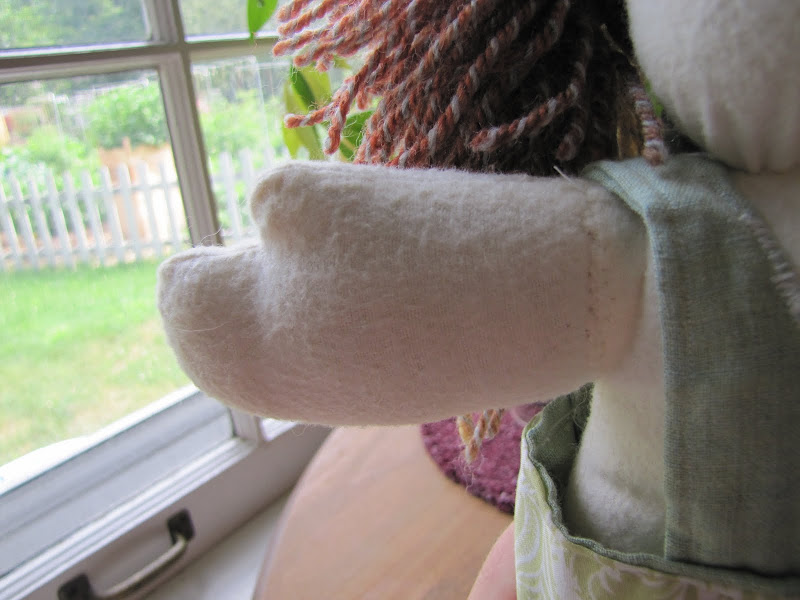 Then the head. I just had an old wool sweater that needed using (the one that you saw for the hat), so I just took some of that material and made it into a ball shape and stuffed it really full. Then I sewed off the bottom and that was my basic head. I could have used a spare sock or something, that probably would have been easier. Anyway, I made it about the size I wanted, then went to this website for more help. I found her head instructions much clearer than the other tutorial. I tied around the head like she says to do, stitched at the ears, and pulled down the string at the back of the head. Then I had to make the nose! For that I referred back to the first website, Fig. 6. Honestly I didn’t really understand how they did the nose so I just started stitching into it and it sort of just popped up! Then I covered the head with my flannel and stitched it up the back and then at the top, making sure to pull it as tight as I could. I’m sure it would have been less wrinkled if I had used the "skin fabric" they use, but I just had what I had. 🙂

I then attached the arms and the head (also sewing up the shoulders as well) as best as I could by just hand stitching. It’s not perfect looking, but it’s very sturdy! 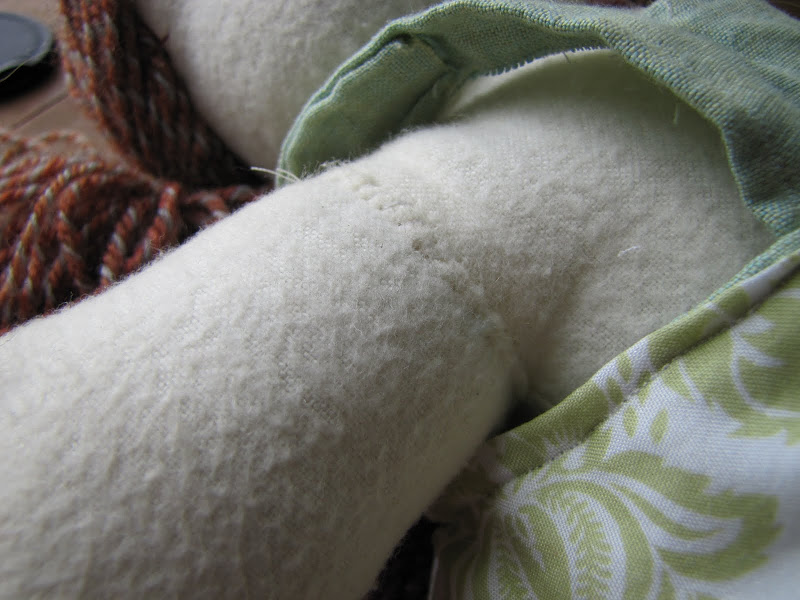 Then I embroidered the face. I just picked out some thread that I liked and went for it. I’m sure there are more technical ways of doing this, but I just eyed it. 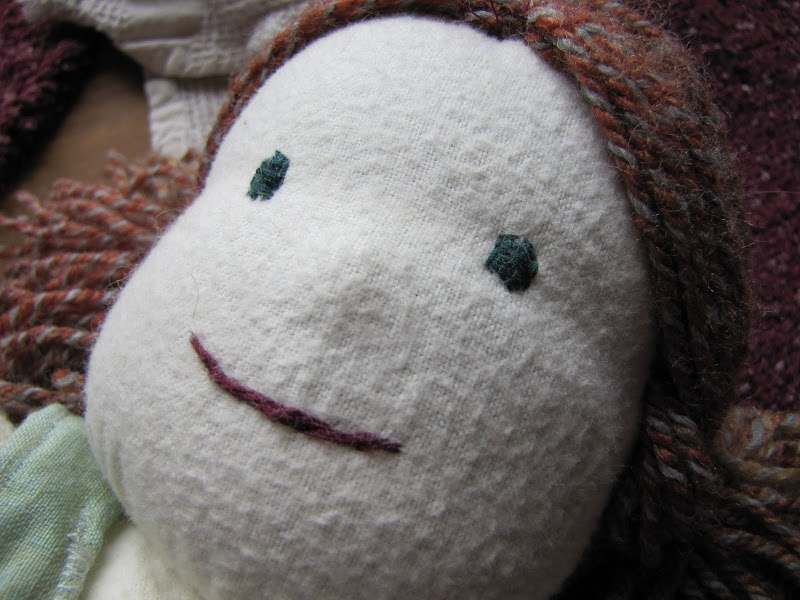 Then came the hair. I referred to this site for info on that. I didn’t do everything that she did, but I did take yarn and wrap it around a book that I thought looked like the right length, and then taped it in place directly on the book. Then I stitched up the first set with thread down the "part" (at one edge of the book), being sure to knot it and secure it as I went. Then I cut along the other edge of the book, and there was my first set of hair! I sewed it along the part, and then also sewed it to the head along the sides to keep the hair down on the head. Then I repeated the process with the book, etc. This time, when stitching it to the head, I used a tapestry needle to do it with yarn and just looped and knotted it through the other hair and thread so that it had a more finished look. The second set of hair only needed to be sewn in along the part. I hope this is all making sense… I just did my best to attach it really well. Then I took some more yarn and made these cute pigtails, and trimmed up any really straggly looking pieces- although I sort of like the straggly look! 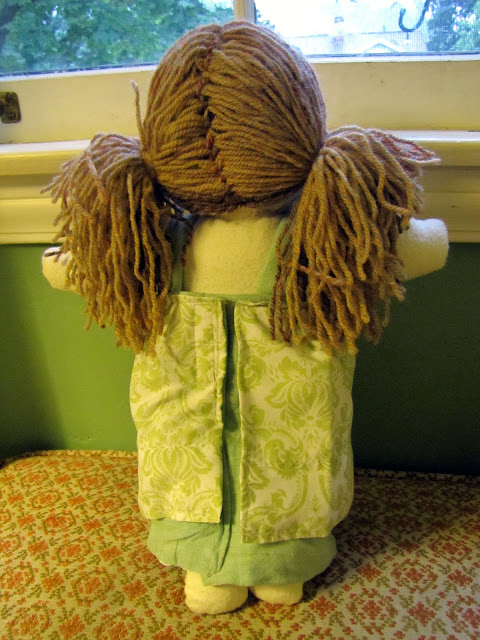 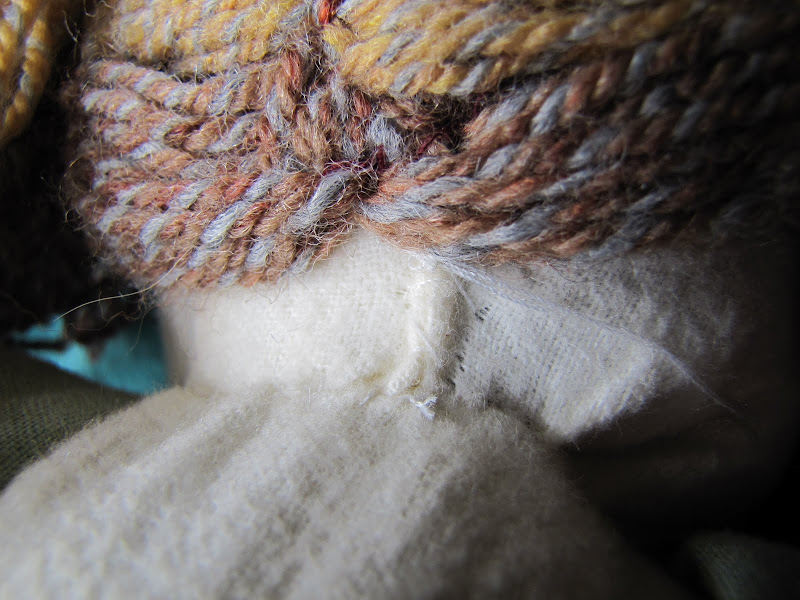 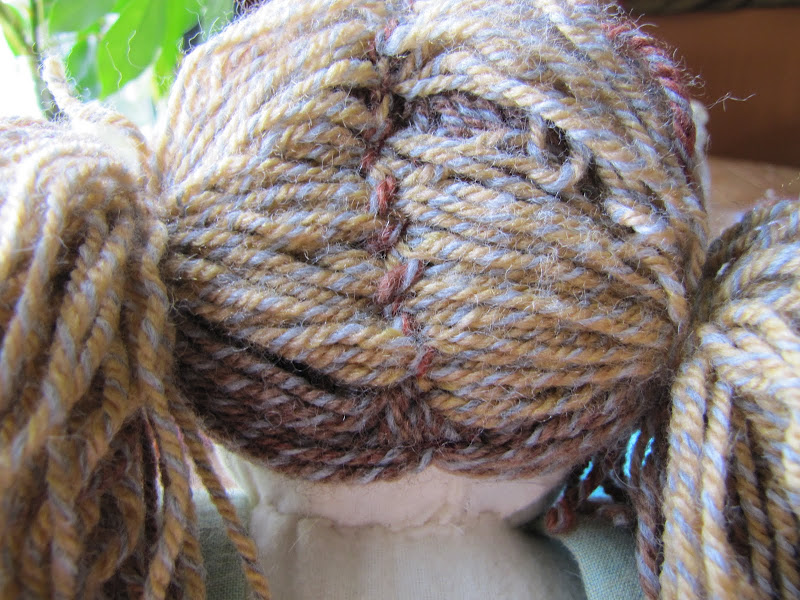 That’s it! Then I just made her a little dress, and put some velcro on the back to make it easy for Vera to take it on and off.

I see lots of fun with these in the future. It probably only took me about 4 hours to do! I plan to make more outfits for her, and I’m thinking I’ll have to make a fairy doll soon- I’ve got this great rainbow funky yarn to use for the hair. When I do the baby doll, I’m not quite sure how I’ll do baby hair, but I’ll update you all when I do. If you have any more questions let me know! I know this was kind of unorganized, but that’s kind of how I did it. 🙂