It’s been 16 weeks since we broke ground. Time is funny, since to some people that seems a very short period of time to have come as far as we have (I’m in that camp, personally), and yet others have acted as though it’s taking quite a while. Who knows, it takes what it takes! 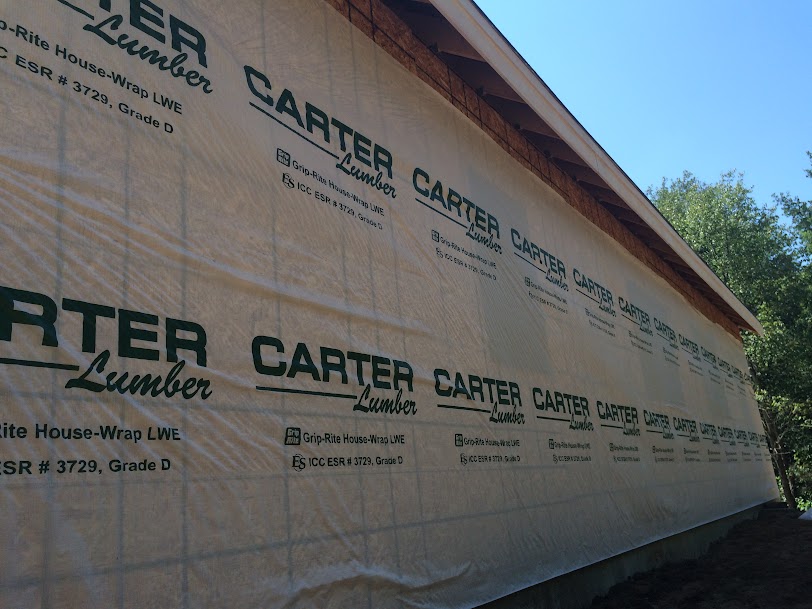 After the roof sheathing Jeff and I got started on wrapping the structure with that special house wrap. It was easy enough, but awkward. It comes in a huge roll, 9 ft tall. Jeff and I got the bottom of the house, but then he finished up the tops with some friends. Before I knew it, my house was wrapped up like a present (well, with lots of advertising for a local lumber company…) 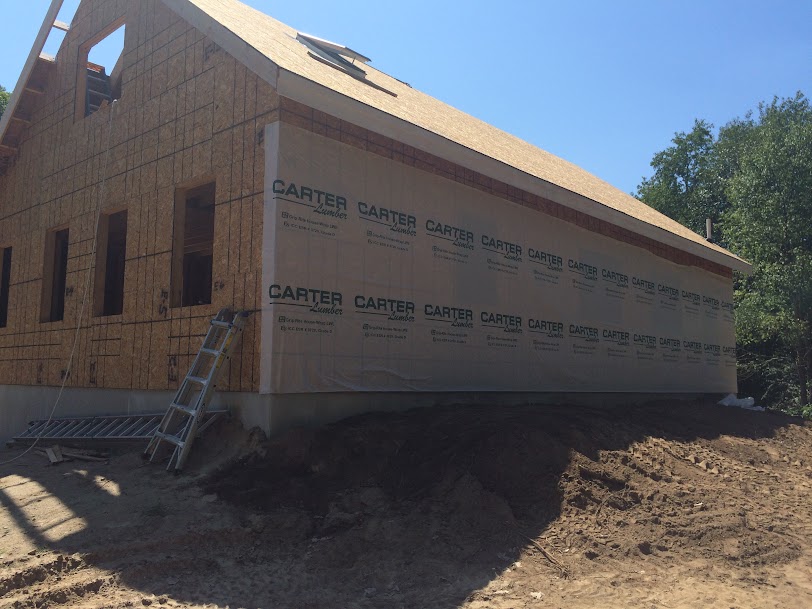 We had to start by covering up the windows and then cutting the holes in a specific way. 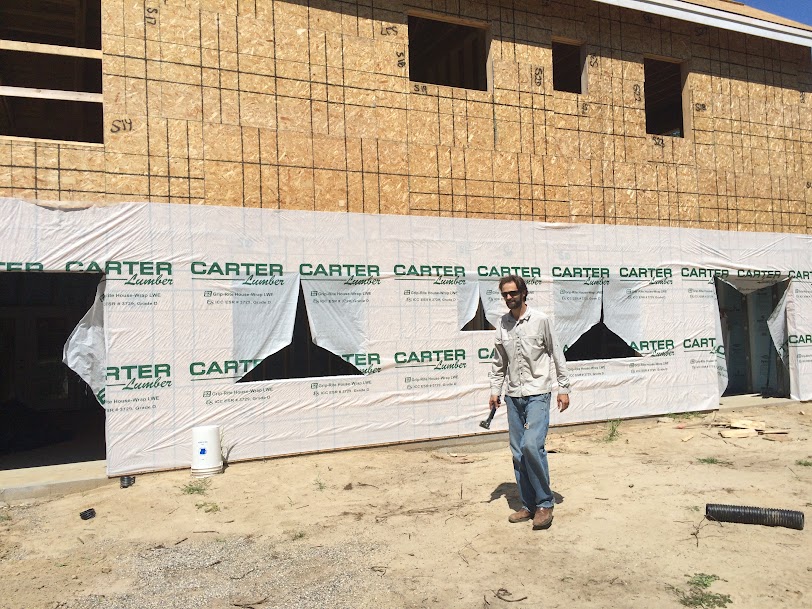 Jeff is back to work full time and so the projects are having to fit in entirely on the weekends and weeknights.

After the house wrap was on, we were able to start installing windows. Windows are a pretty straight-forward job, but it takes at least two people- to steady the thing, one on the inside and one on the out, and caulking and leveling and all that jazz. 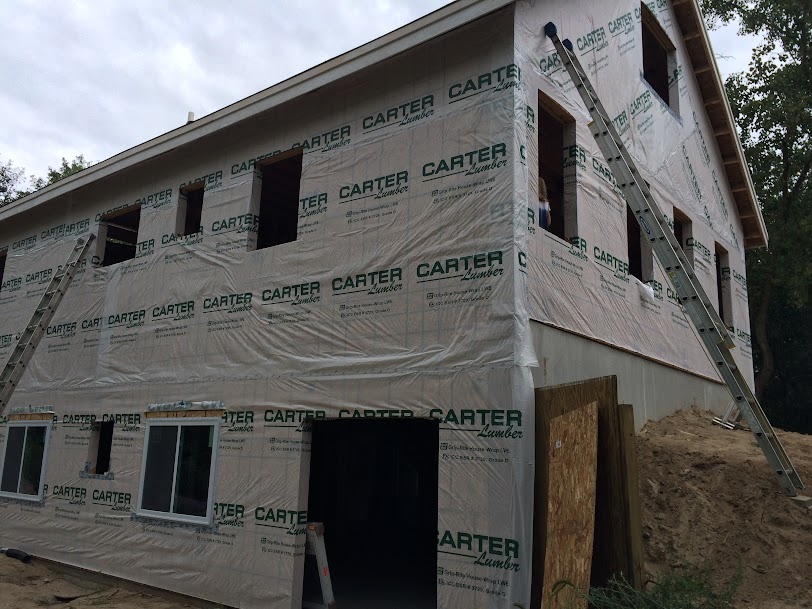 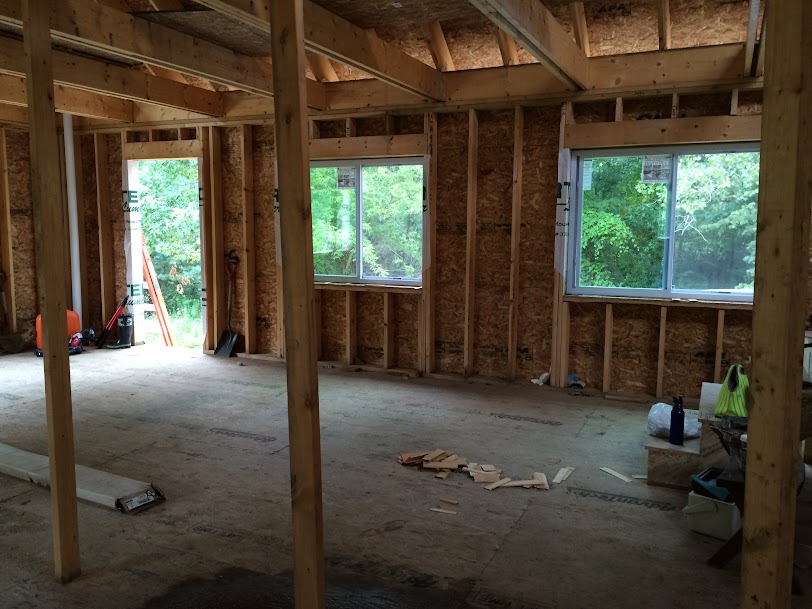 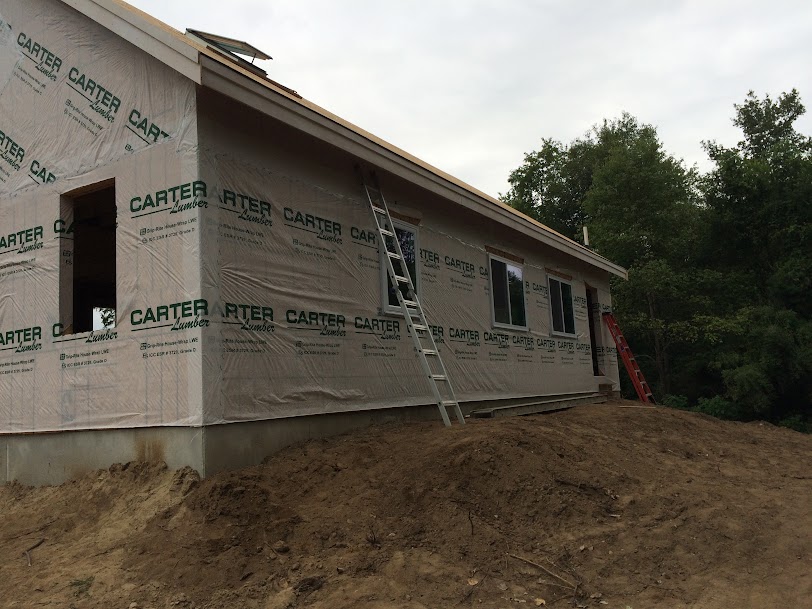 So windows happened and then Jeff got started on a bunch of interior projects simultaneously. Without the promise of outside help, we’ve had to divvy up jobs and figure out what needs manpower and what can be done solo, etc. Wiring was one of those solo jobs that Jeff worked on for a while last weekend. 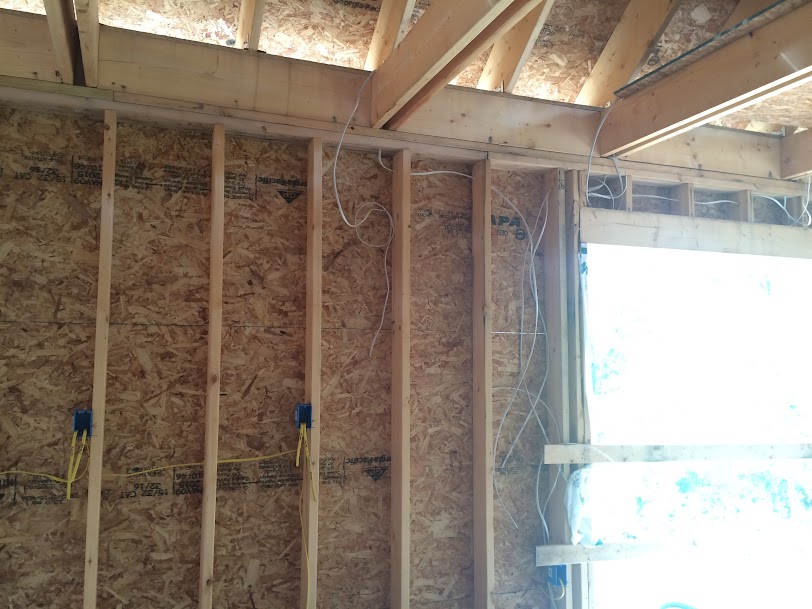 Again, just learning as we go. I know nothing about electrical work, but Jeff seems confident and had some knowledgeable friends help him. I figure I’ll know a lot more than I did before after this project. When we were able to have 3 people on site, we switched gears and did the west windows.

Then came the roof! We hired the shingling out, and so it was very gratifying to know that this job was getting done while we were off doing other things. We came to check on it here and there, but 2 guys did it in just a couple of days.

Next came HVAC. We have the good fortune of having a very generous and knowledgeable brother-in-law who is in the heating and cooling business. He helped us design our whole system and came a little over a week ago to help us get started.

So at this point we started juggling a lot of different projects. The window installations, the wiring, the HVAC, and then Jeff started doing more interior framing. He needed to do this to run all the wire, so it all kind of has to go together.

Above is the view down one of our trails. Below (although it’s a little difficult to decipher in the picture) is all the finished interior framing for the main floor. To the right of the picture is the bathroom/kitchen wall, then behind that and around to the left are two bedrooms and closets. That’s it, pretty simple design. The other half of the house will be a big common room, with the kitchen to the right. I have ideas for how I’ll set the rest of it up, but we’ll see when we actually get into it. 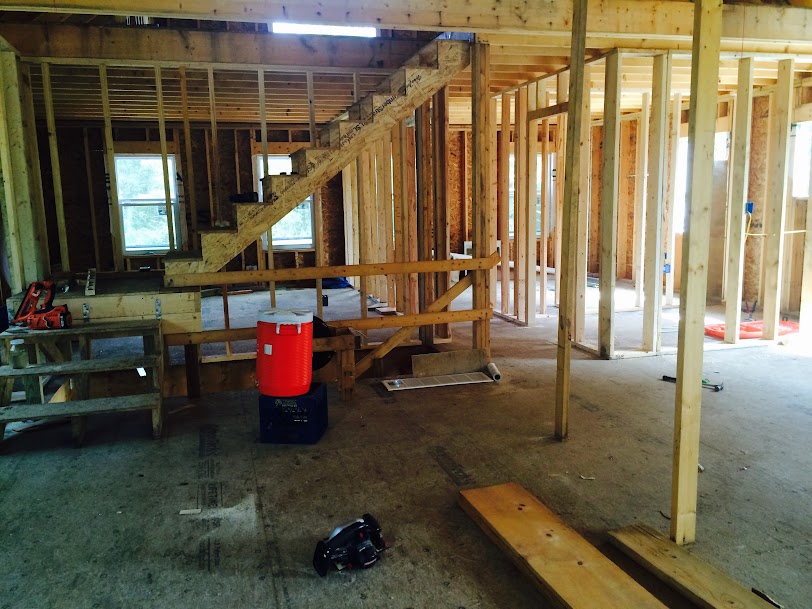 We were finally buttoned up enough to get working on a project I’d been excited to do. Finishing the concrete slab. We got to work on that this past weekend, cleaning the floor and scraping up caulk and other stuck things, and then staining. 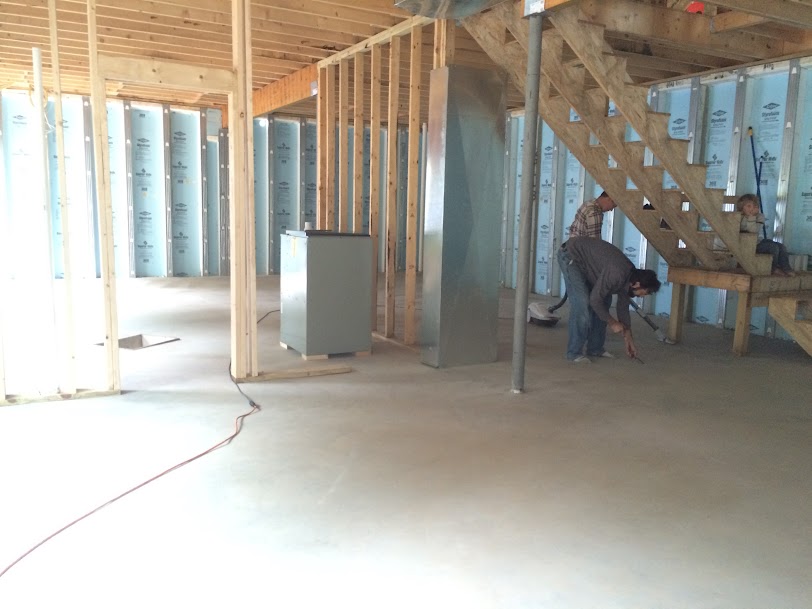 We chose this stain in “adobe”. After cleaning and everything else we had to do on Saturday, we finished about 1/4 to 1/3 of the floor.

I returned Sunday after some morning work and dropping the kids off at friends house to find the southern upper windows installed! Jeff had a friend come out and so they worked on two-person jobs while Lindsay and I got to finishing the staining in the basement. 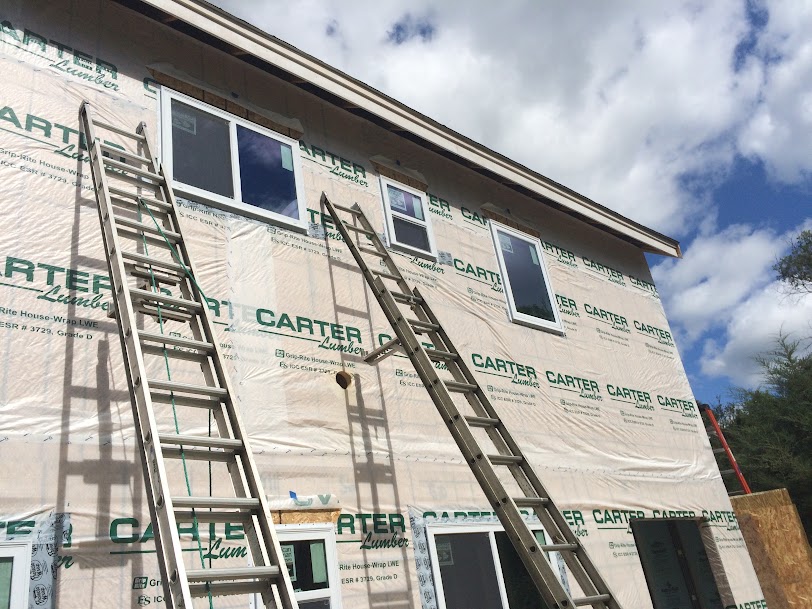 Finished with the stain, before the final finish: 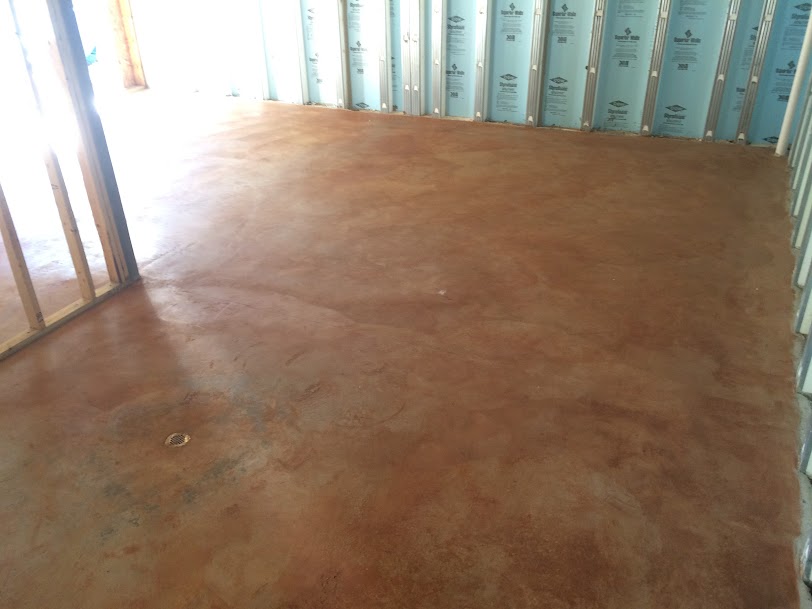 I really love it. It’s exactly what I wanted, so earthy and textured and beautiful. I’m excited to put the sealer/finish on it this Wednesday when I get a chance.

We came upstairs to find that they’d installed the upper french doors on the south side, and also our front door. <3

I’m constantly amazed and so grateful that this partner I have is so brave and willing to just get up on some scaffolding and install some heavy doors. It’s great. He’s gotten so strong during this project!

We’re really getting there, aren’t we?

I went out there yesterday briefly to check on the floor about 20 hours after the application. Yep, I still love it! 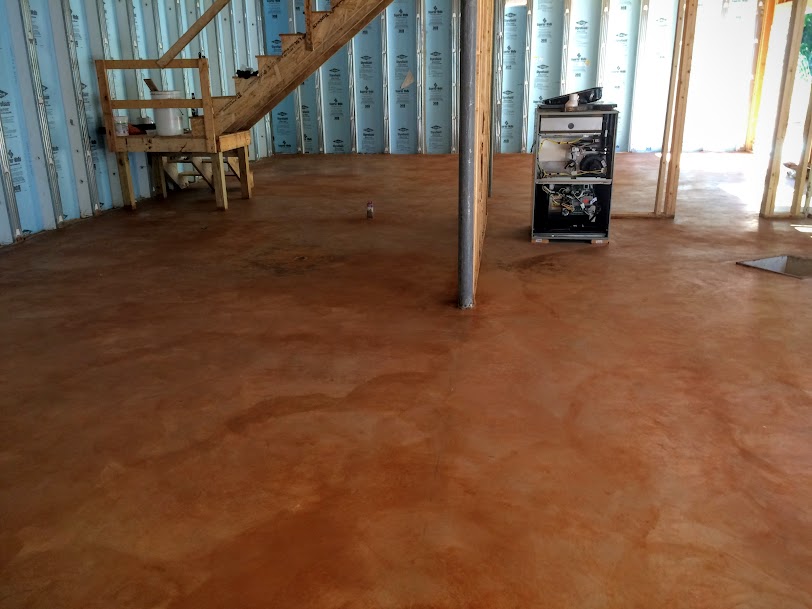 The other project that’s been going on simultaneously is the driveway. We had quite a job to do, there. It’s such funky terrain, we knew it would be a big daunting job. Thankfully the township said we could take an extra 6 months to finish it after we’d moved in. However, we met this great guy who dug our basement back in June, and he’s continued working with us at such great rates and with such efficiency that we’ve just hired him to do the driveway too. He’ll also be doing our septic system as well. Anyway, he’s made really quick work of it, I think! Below is the view from the edge of the driveway down to the house, and the following pictures are of my walk up towards the road. It’s about 400 feet. 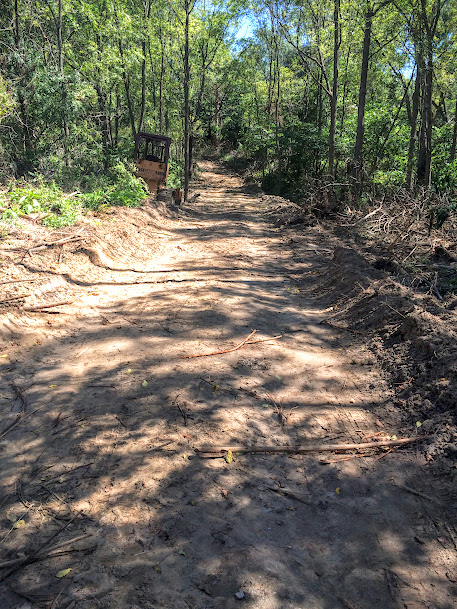 He’s laid rough rock below the soil to build up the drive. 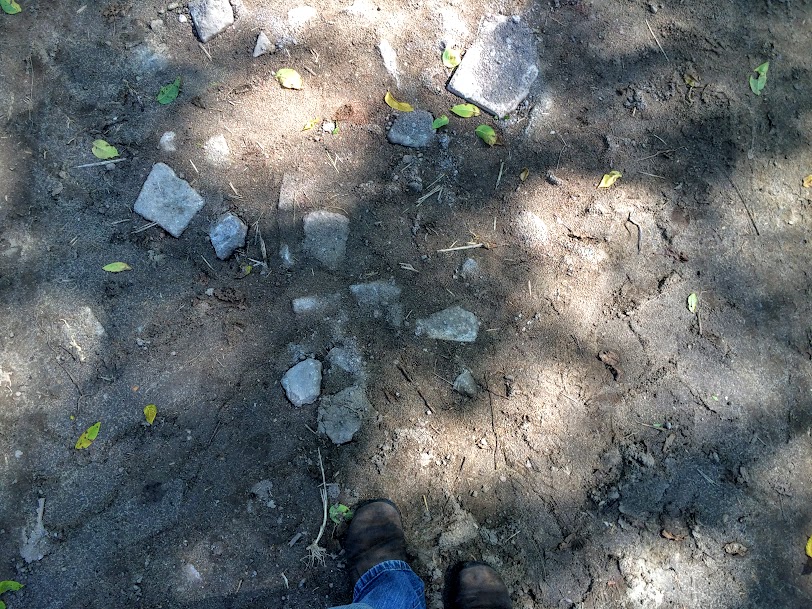 The drop is significant in areas. I’m so glad to have been able to hire this job out, as it just would have been a bit of a beast for Jeff and I to take on.

Being surrounded by all these trees and earth and the way it all smells… it really makes me wonder what humans are missing in terms of the wild natural world. This brief walk up our future driveway felt so beautiful and wonderful that I got a little teary. The leaves were just starting to fall here and there with that distinct smell that comes with autumn, but with that sun-warmed-end-of-summer thing too, and everything was bright and clean and peaceful.

The drive comes up against our neighbor’s yard to the south. She’s amazing. I am seriously over-the-moon happy to be inheriting both our neighbors to the south and the ones to the north. To the south is a woman from Japan (I haven’t met her partner yet). She is into growing food and raising animals, she’s got a hoop and a beehive, chickens and geese, and a couple of pigs named Dumpling and Barbeque in Japanese. She’s expressed a lot of excitement in having us move in there, and I’m very grateful to have someone just next to us who will understand and even enjoy our crazy ways, maybe even collaborate on projects, care for each other’s animals, etc. We’re going to be good friends, I can tell. It’s just going to be great.

To the north of us are (other than the Gladwins, of course) an older couple who came from Kentucky originally. They have this great southern quality and have been nothing short of wonderful towards us. They are helpful and interested and seem to like us right back. They’ve got a big homestead and have been living like they do for many years. They keep a big garden, can, cook, work hard, and are just generally really great and kind. Earlier in the season I gave the man some tomato plants and he gave me cucumber seedlings. We’re slowly getting to know them better, and they have grandkids that come to stay from time to time that the kids can play with. They love to have our kids over on their play structure and they feed them snacks. They’ve been super nice to Jeff, sometimes making him coffee at 7am when he goes out to work. Again, they are just great friends already, and I can’t wait to connect with these people all around me. I can just tell we were planted in the right place, for so many reasons.

That’s it! I’m sure to be getting more posts in soon, since the kids have started school and I’ll have some small blocks of kid-free time during the week to write.