Here’s the progress on the house, since the middle of last month:

We were able to borrow a generator so that we can continue to work on the house in spite of dwindling daylight. Our limited time to work on it and the long days we’re pulling (fitting it in after work and on weekends) are starting to take their toll. We are anxious to move in, not only because we’re so excited and ready to pull everything together, but also because we are basically paying double rent right now and can’t afford to live this way for much longer. We can’t afford it now, but it is what it is. A good investment in the end. We’ve been talking about taking another week off of work just to put in another really good push. We’ll see. I quit doing the farmer’s market early this year so that I can have a more singular focus, and overall we’ve become less social – not even because we don’t have time, it seems like we have to just to create the necessary brain space for this project. I’ve said it before, but this is big. It’s awesome and gratifying, but definitely has a “no turning back now!” kind of quality that causes us a level of stress that is unfamiliar.

Anyway, after the last update I worked on finishing the basement floor. 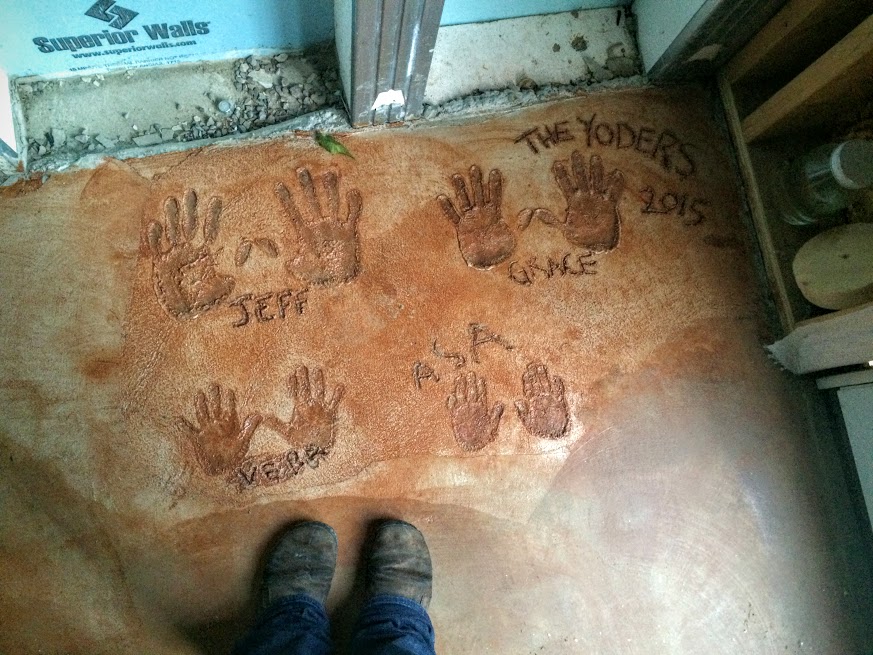 Thanks to my friends at a local “green” supply store, I was given a small sample of a more environmentally friendly sealer to test out on the newly stained floor. I tested it underneath the stairs. It worked well, so I went ahead and used it on the whole floor. Below are pictures from that day. I carefully covered the whole floor with the sealer using a pump sprayer. I went from under the stairs on one side, around in a circle until I cornered myself on the right side of the stairs. 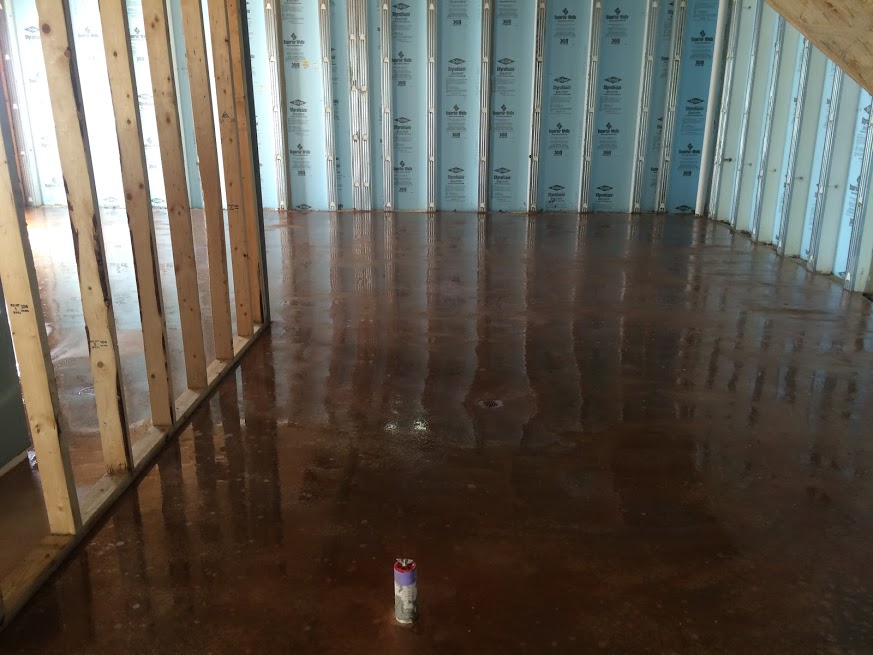 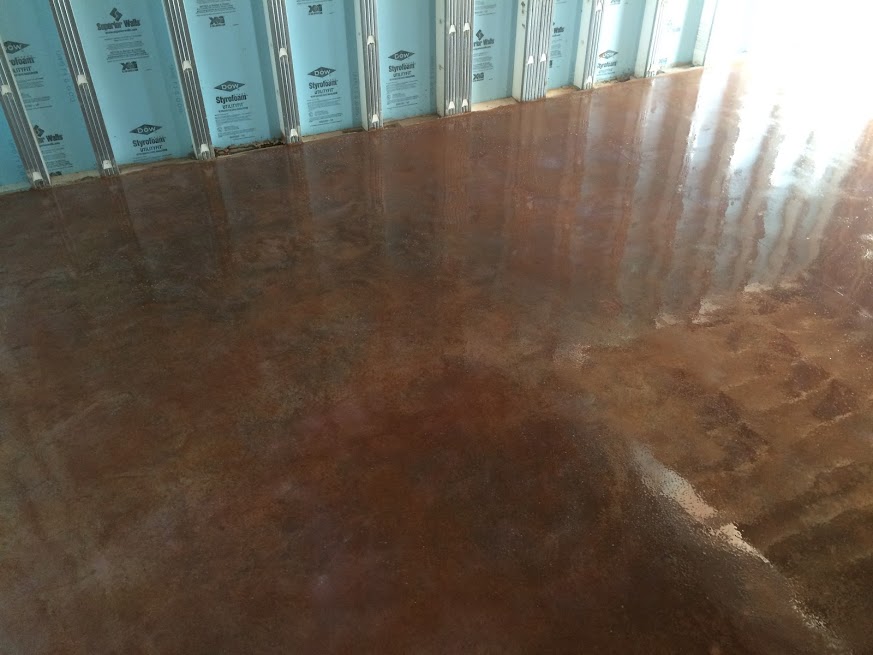 I had opened up windows to get a little better ventilation for drying. At that point we didn’t have any doors on the thing, so I’d pinned up plastic over them in an effort to keep out dust and bugs while it dried. I had to camp out upstairs to kind of keep an eye on everything. It was a beautiful day, but kind of blustery and I had to continue to reinforce the plastic sheets before they flew loose from all the wind. At one point I was compelled to look in from the outside through the window, just to see it from a different vantage point. I saw that a piece of paper had been picked up by the wind off of the stairs and flew quite a ways across the room and landed in the middle of the floor. Thankfully it was only about 6 feet from the southern wall where I was peering in. I didn’t know what to do, but I took my chances. I carefully lifted the plastic flap hanging over the door, slid inside, and used the studs to spider myself across the room until I was jumping distance from the piece of paper. I leapt to the driest part of the floor I could see and quickly ripped up the piece of paper. It was already pretty stuck on there, and so I used the only thing I could think of within my reach, which was a piece of a shim sticking out from the window. I managed to take this picture of it too! I scraped up as much as I could with the little piece of wood and then figured I’d have to deal with it later. It was funny to me at the time, and while we got most of it up and fixed, you can still see little bits and letters of print that got transferred to the floor if you look carefully. 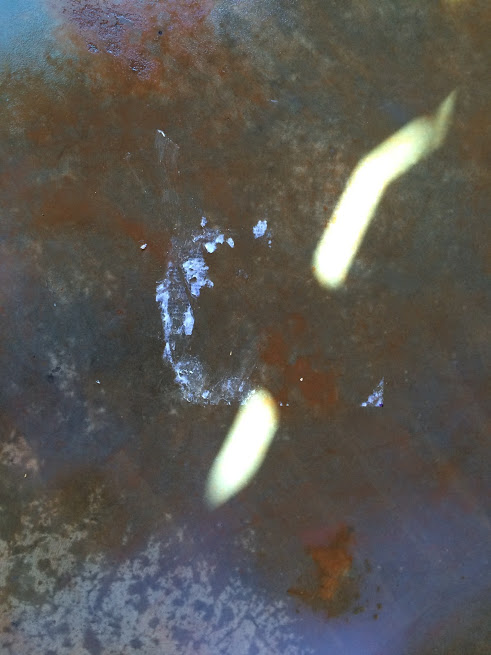 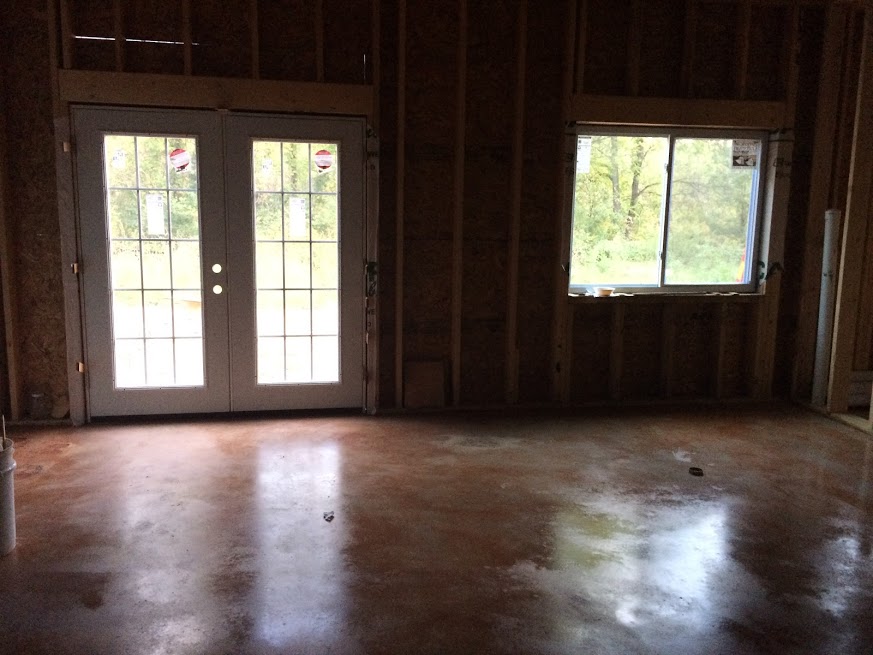 I like the finished product a lot. It does need another coat of sealer, but we can’t afford it right away. Basically, the sealer filled in lower spots and evened out the floor- which is great, but that means that there are thinner areas and it gives the floor an inconsistent almost wet look. I’ll go through as I’m able and finish up areas after we move in. For now, it’s good! 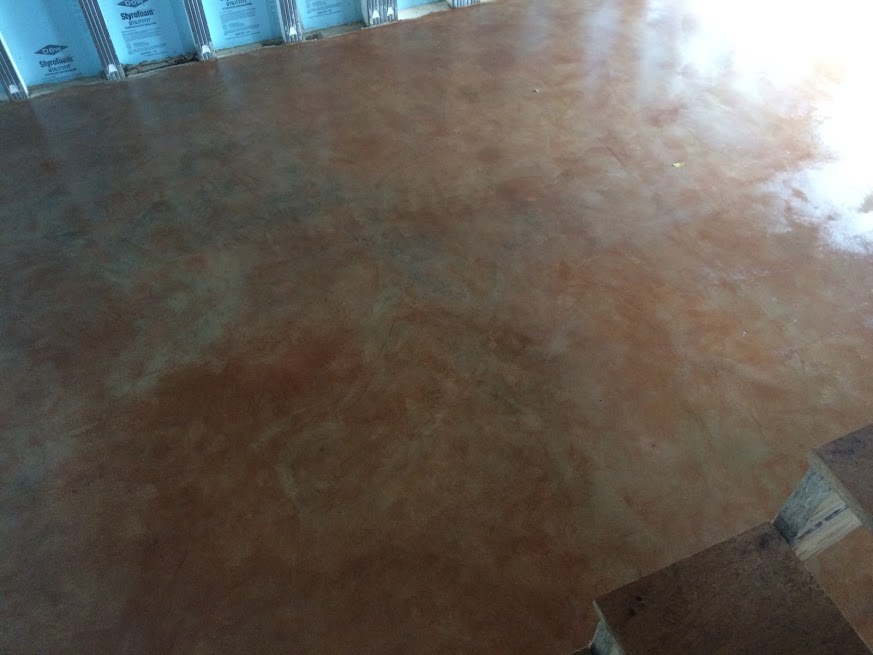 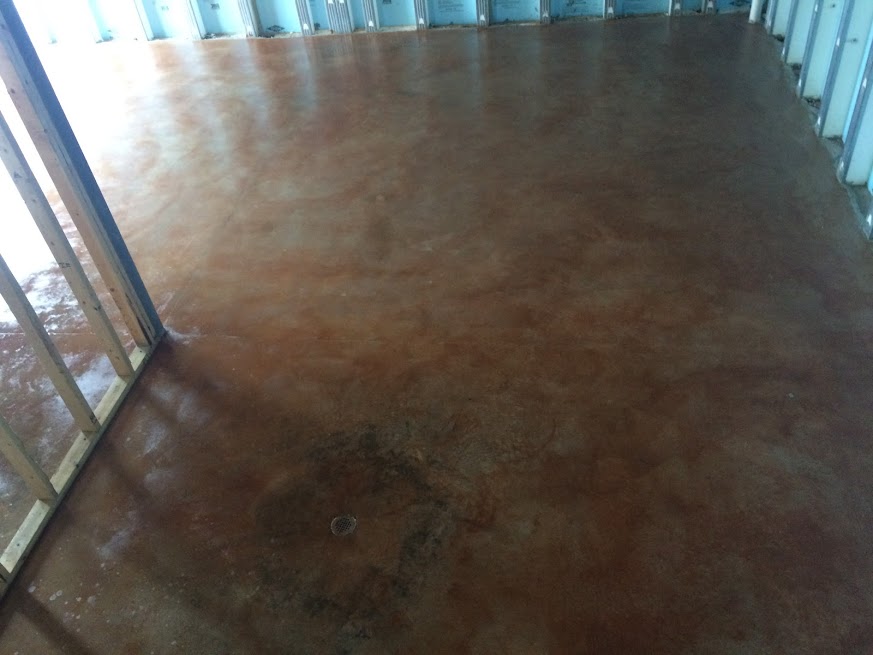 Next was the framing of the loft! As you can see from my very official drawing below, we decided to create privacy in the loft but still maintain lots of light and openness by adding a french door and a window right into the interior wall. Because… why not? We also got the doors and the window for free from a friend! Anyway, despite the strange limitations we’ve encountered, we are finding fun ways to express our own desires for how we want to live. 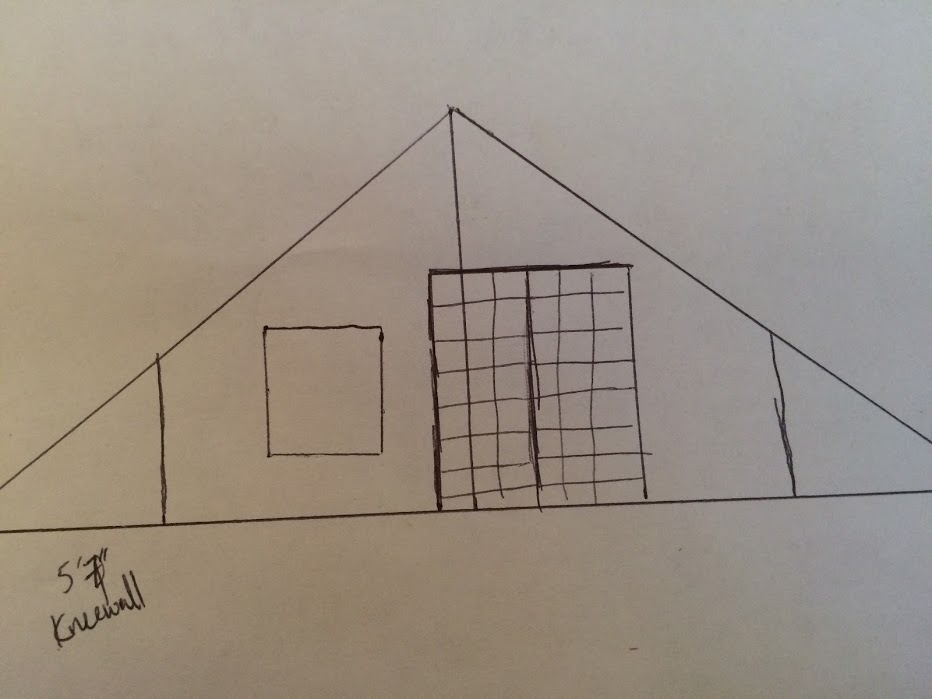 I sent the above picture to Jeff after he sent me specific measurements and asked me what I wanted, and then next thing I knew it was all framed out. 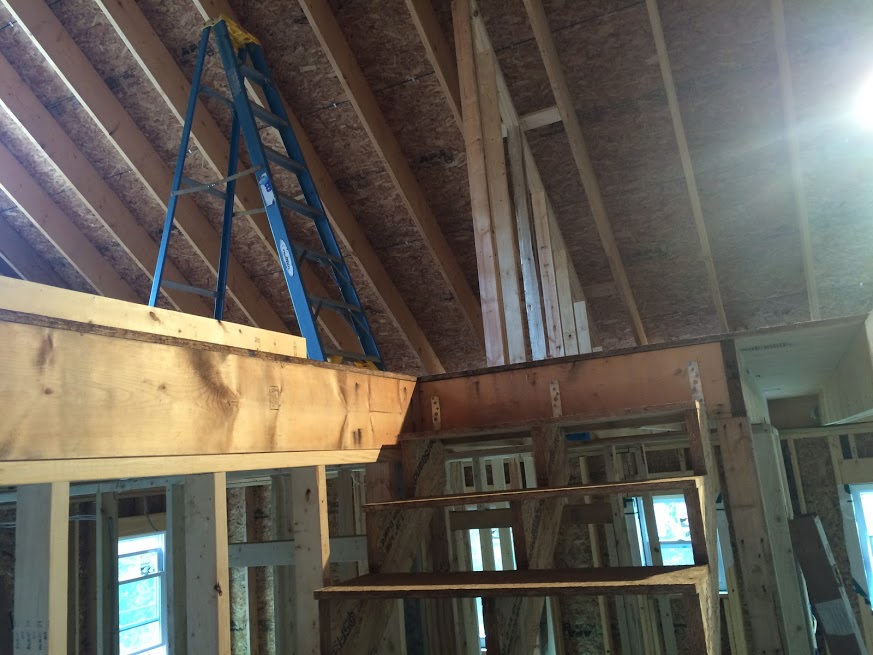 Then he put up the second kneewall. After that came the wiring. He’s just about finished with the initial electrical work! 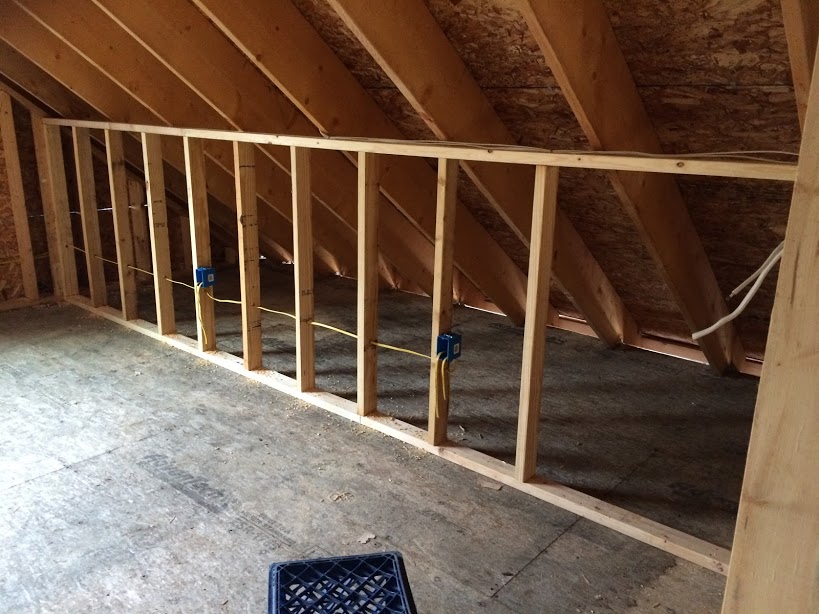 Around that same time, the doors to the basement were installed. Jeff also worked hard getting the exterior prepped for siding installation, which included a lot of taping around the windows and various detail work. 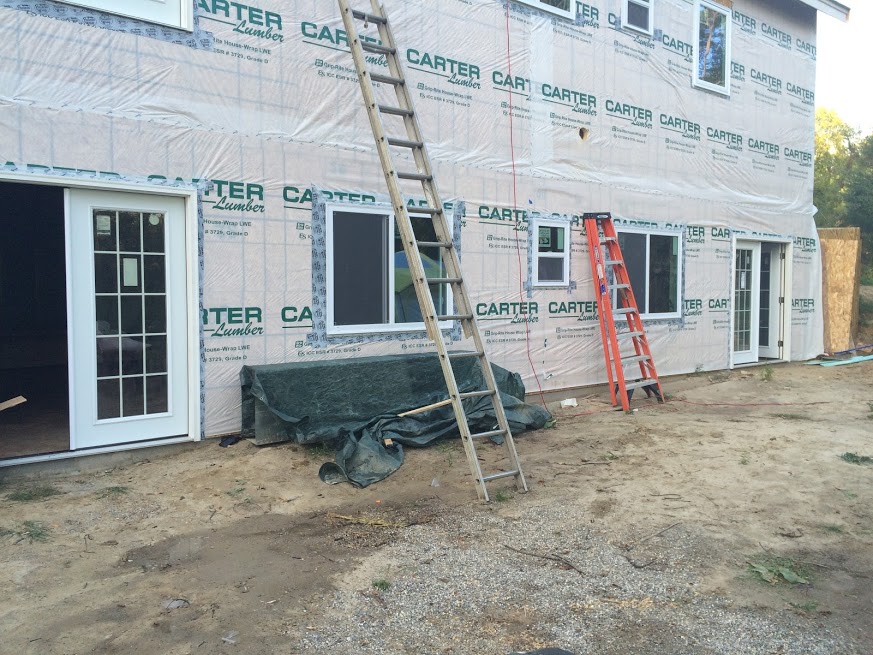 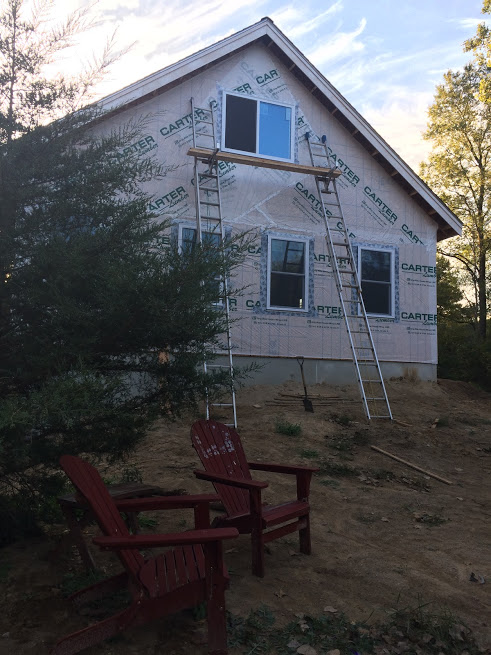 Before siding could be put up, we needed to paint and put up the soffits and the trim board. I’m learning so much new vocab, too. Jeff was just throwing around this “soffit” word all over the place like it’s something that people actually know… I finally just asked him what the heck a “soffit” was, and it turns out to be a very useful thing! Go figure. It’s that piece of material that bridges the gap between the top of a house’s walls and the roof. I was wondering how that whole thing was going to get sealed up! So there ya go, “soffits”. 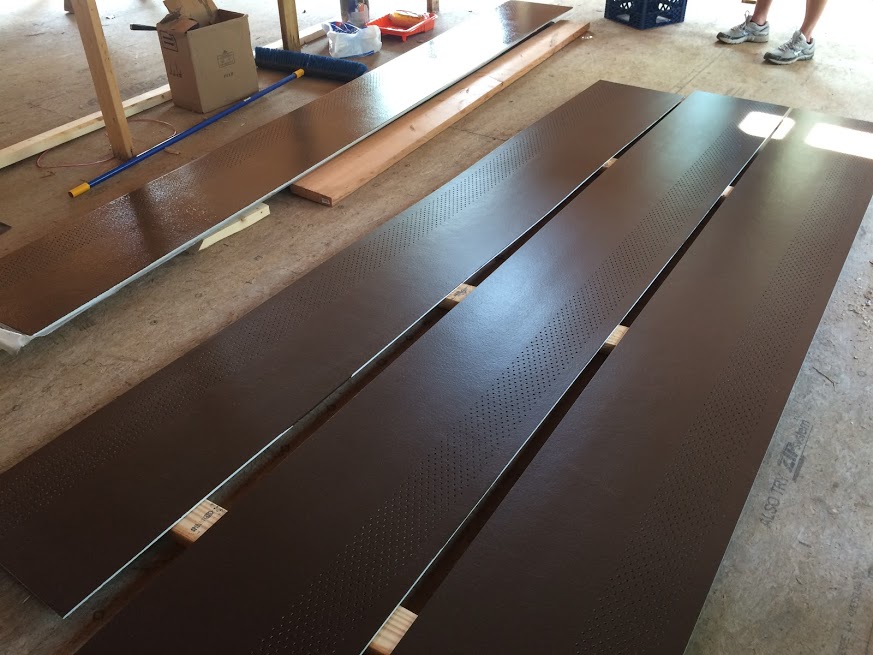 We picked a nice dark brown color for all of it. I’m happy with it! Below are narrower pieces of trim. 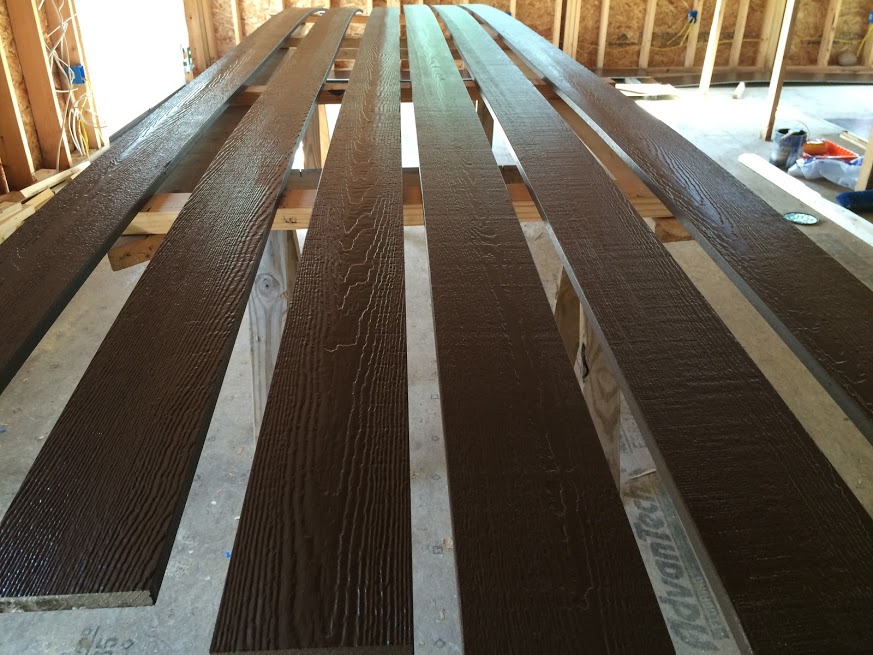 Next began the trim installation. 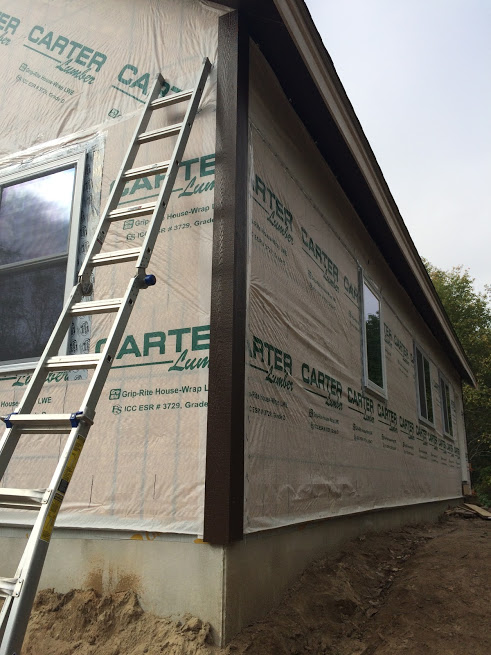 And look there! Soffits! A generally under appreciated house feature, if you ask me. 😉 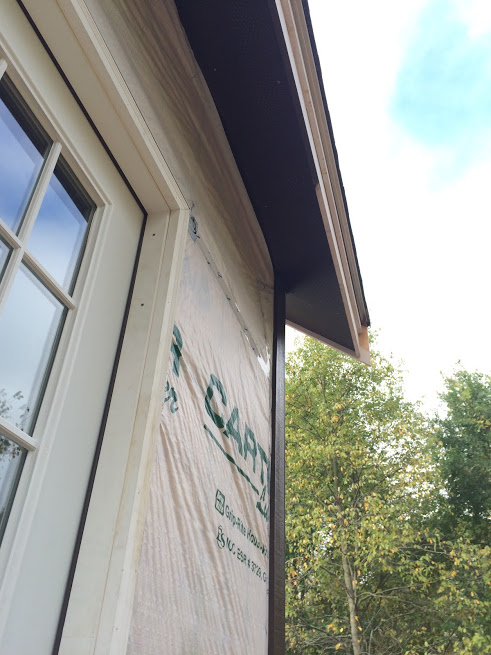 The interior of the house has become the main work station, since it’s dry and warm. This is what the upstairs looks like right now, and below that is the state of the basement. 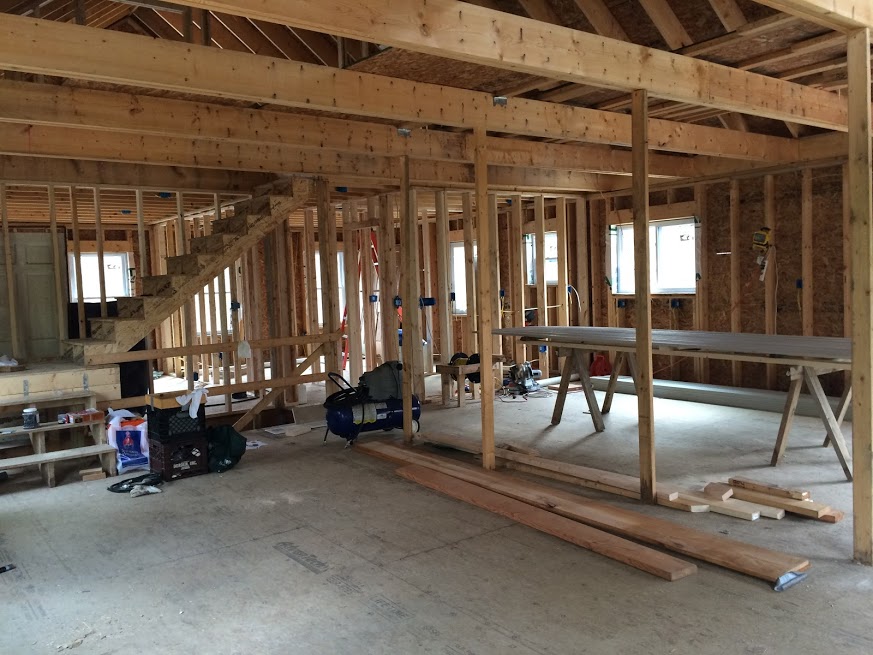 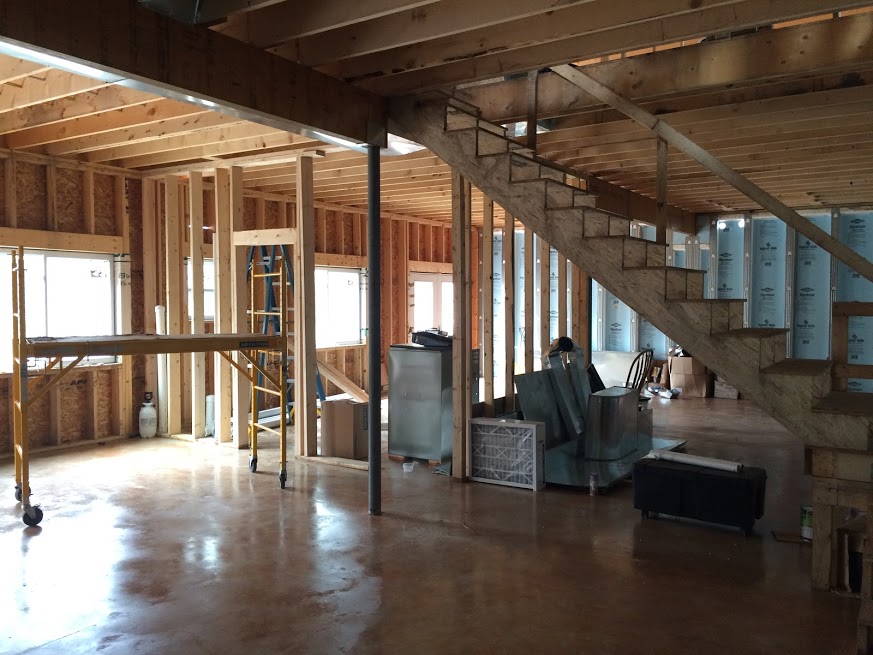 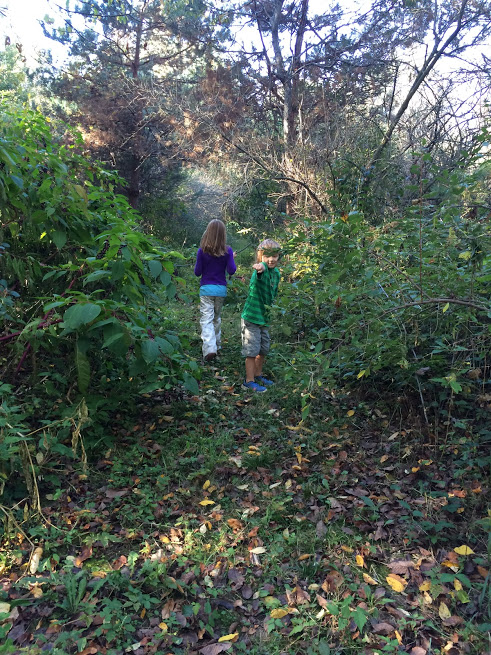 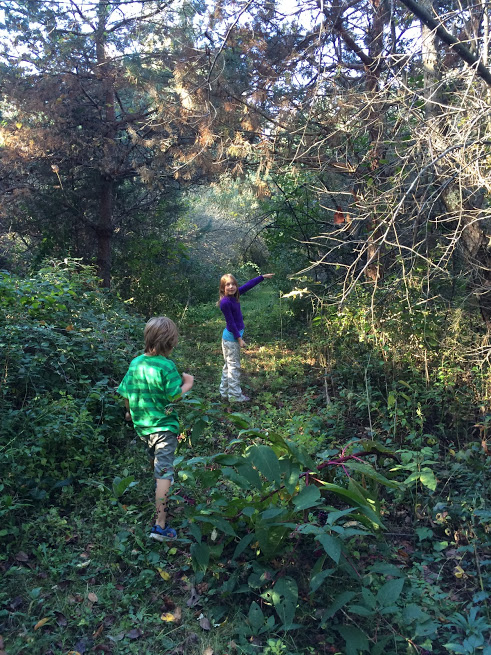 The kids have been really good. They are feeling more connected to the house and project lately, which is great. They might whine a little at first, but soon enough they are immersed in play and wandering the land and eating berries. We’ve been building fires, and on one night they were just so happy with everything. I was too. 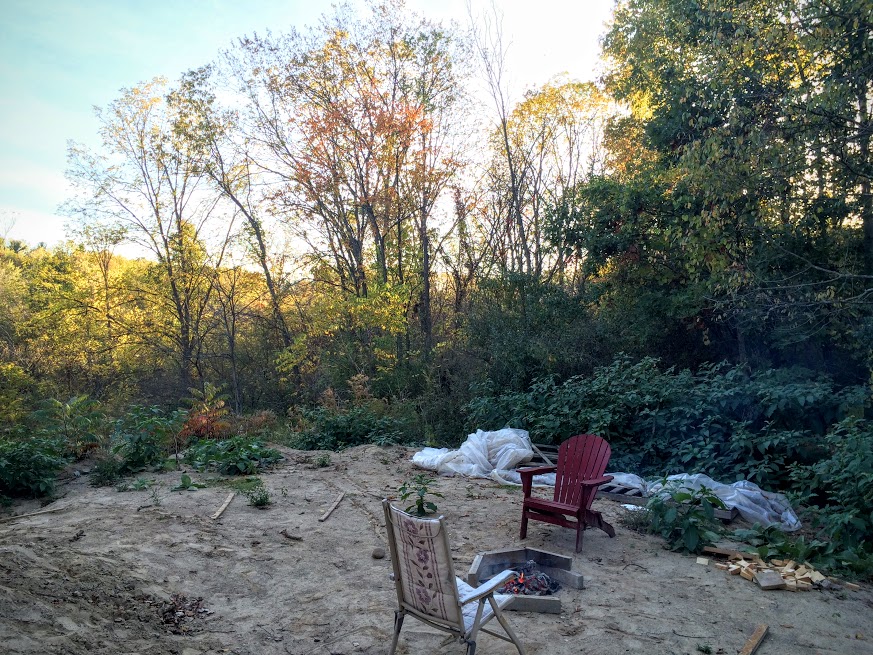 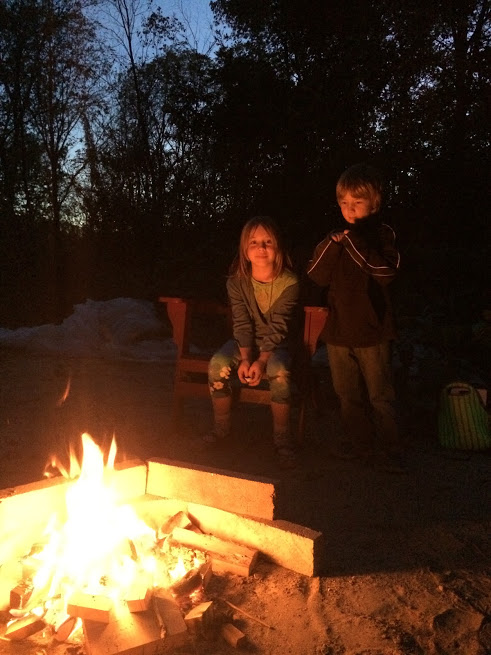 Next we were able to start on our siding! It’s a pretty straightforward job, and has been going pretty smoothly. We always kind of wish things went faster than they do, but overall I think we’re moving along well. Our siding is one of my favorite kinds of green. 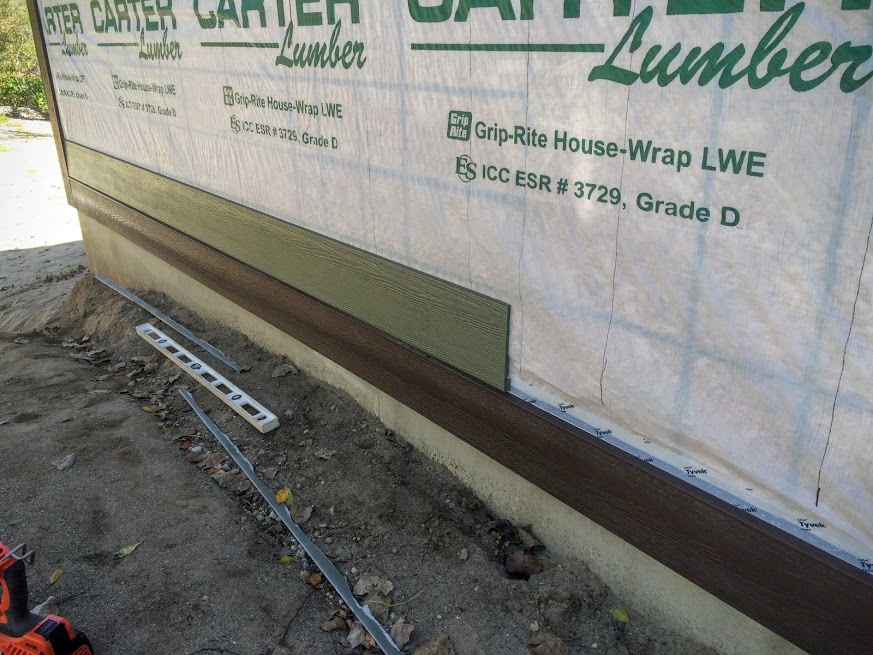 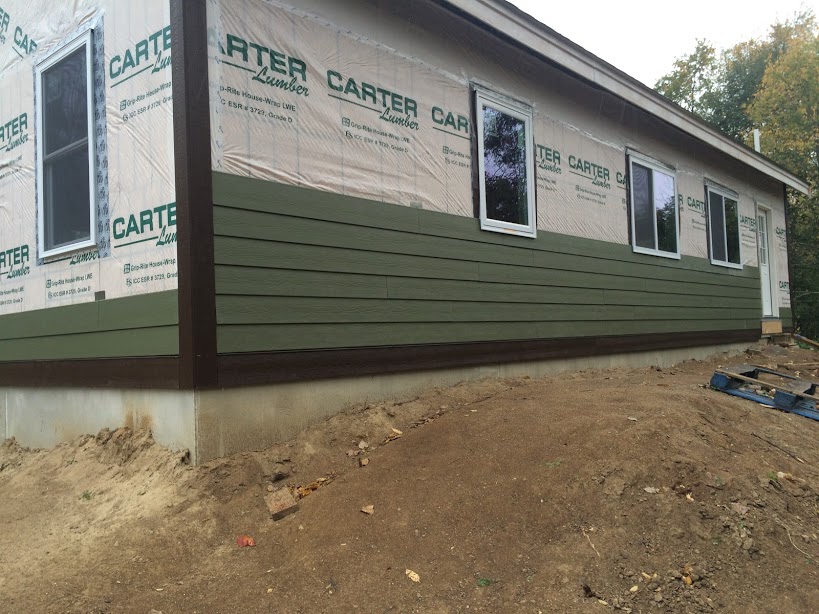 Little by little, we are making progress. 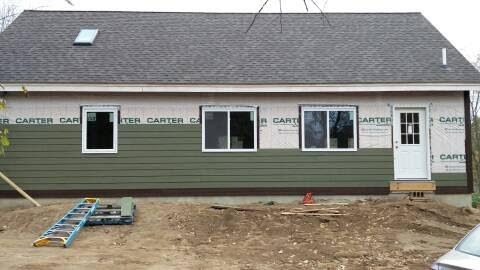 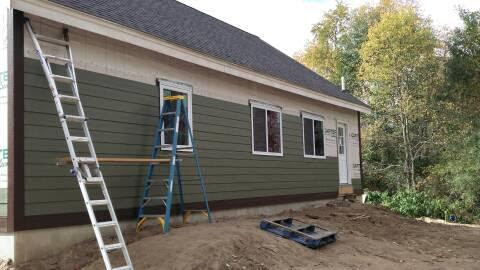 The next big thing to happen was our well company came back to install our pump and the “bladder”. I went out after they’d come through, but I could tell they were there because they’d smoothed out an area they had previously made super lumpy and rough with their big trucks in the muddy spring weather. 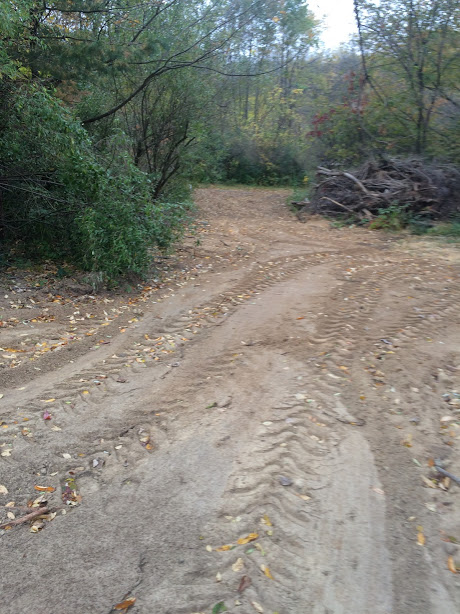 They also removed the pipe sticking out of the ground from the first well attempt.

Below is a photo of the bladder in its spot in the basement. 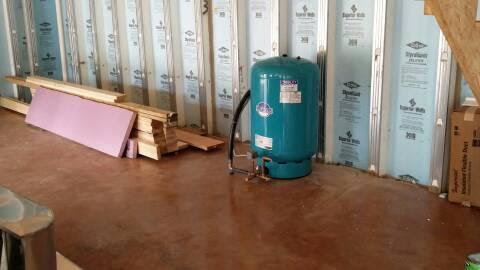 That’s the update! Jeff is out there now working on siding while I’m resting up and recovering from a little bug (Jeff had it yesterday, but thankfully he bounced back after a day!). We don’t really have time to be sick (who does, really?), so we are trying to take care of ourselves right away instead of pushing through only to make ourselves worse. But, on the positive side, it did afford me the time to do this update. Hopefully by tomorrow we’ll both be working at it again! 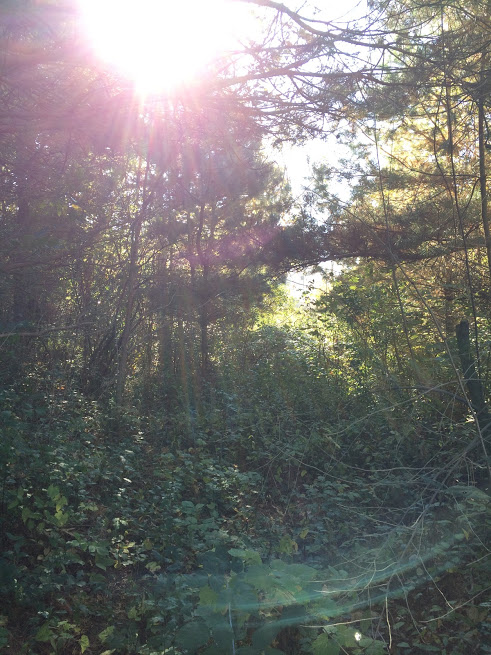