We've been busy… I promise! 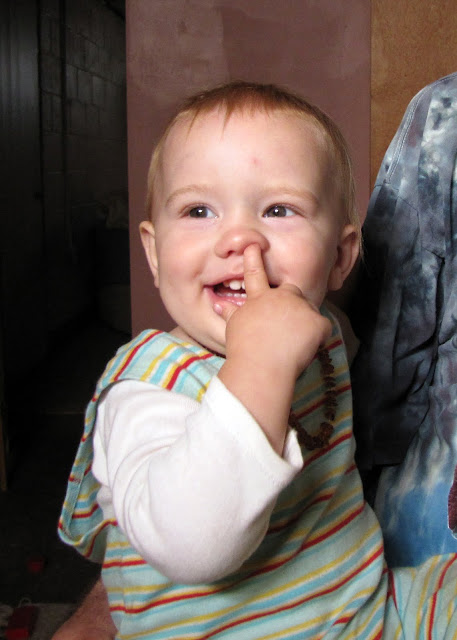 Have I told you guys lately how in love I am? So, so in love. With everything. Do you see how they look at me? 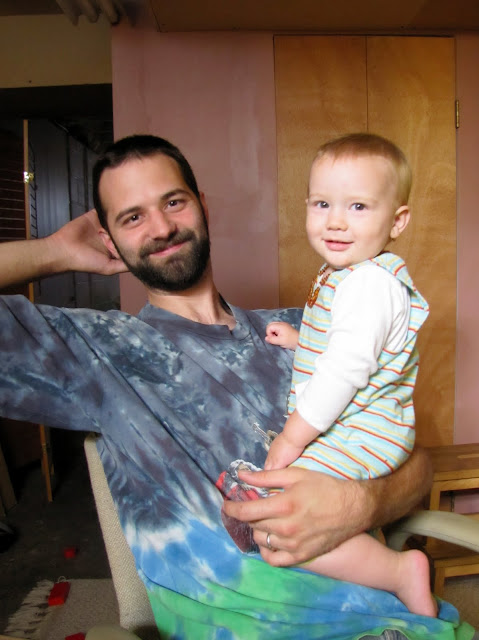 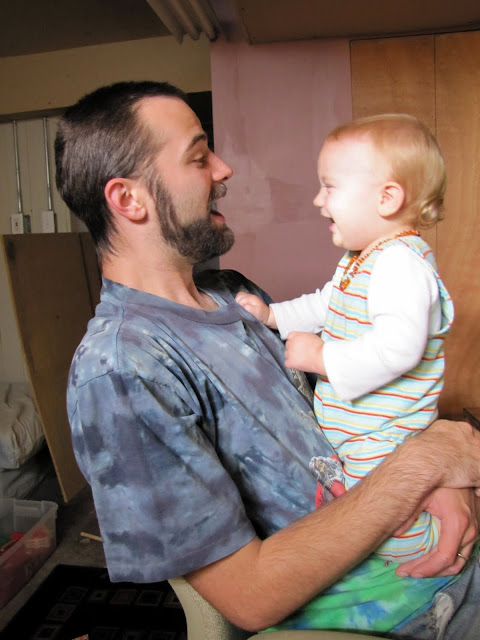 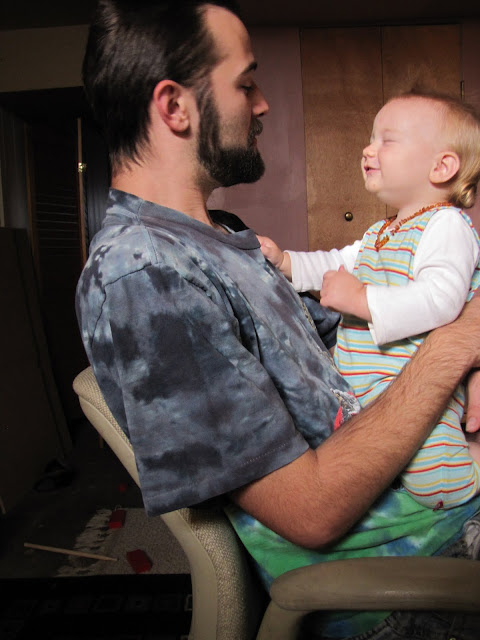 —
Had a thought that I wanted to express here… I don't lock my doors. Many of my closest friends know this and will let themselves in if they beat me to my house. It's just not a secret. I'd have trouble locating the house key at this point. I also rarely lock the car doors either. For several years now I've been made uncomfortable by the act of "locking up", and I've been kind of rebellious about it. Jeff has wanted me to lock the house and car up in the past, and I've complained about it. I always said "Why? Are we going to get robbed? Is someone going to come in at night and hurt us? I don't think so." He doesn't ask me very often anymore. Now, many may see me as being naive. I'm not. I do know that people get robbed. I know that violence happens and cars get stolen and all that. First of all, I don't think that a locked door is going to stop those that do it. If anything, if I were to be a victim in those situations, I've actually saved myself some money and damage because they didn't have to break anything.

Anyway, recently I figured out exactly why it was that I didn't want to lock the doors. I mean, really, what could it hurt to lock them? It's just a simple routine to help combat potential violence and/or theft, right? People don't really think about it. Well, and therein lies the answer… For me, every time I lock the door I'm participating in a culture of distrust. Whether or not I'm conscious of it, I'm saying- "I don't know who you are, but I am afraid that you will take my things, or hurt me, or violate my boundaries." That doesn't feel right to me. And guess how many times I've been jacked in the past 6 years (since I stopped locking my doors)… That's right, never! And let's say someone does rob me. Is that my fault? I didn't lock my doors, so it was an invitation for violence? That reminds me of the argument that a short skirt somehow contributed to a rape… it's just not about that. The person who did it is at fault, and that's it.

People lock their doors so unconsciously, and I don't mean to come off as judgmental. I know that it's not like we are leaving our houses and cars and looking over our shoulders in fear… at least, not most of us. But it got me thinking, are we perpetuating a culture of distrust? Moreover, is this simple act evidence that we are being distracted from the very real violations that are happening to us on a daily basis- namely a toxic environment, economic and social systems that degrade and exploit people and our landbases, and the continued message from the exploiters that we cannot trust each other. THESE are the things we must guard against, and these are the things that trickle down to us and contribute to interpersonal violence. I started to see locking my doors as a kind of poison for my mind. I needed to stay focused on the real current and widespread violence that affects us all. We also need each other to combat this violence and reclaim our communities. When we daily take actions that contribute to a general distrust of our neighbors, how are we ever to come back together? I can think of two more things to share that help illustrate my point.

First- The other day Jeff and I went to Selma Cafe. It's a weekly event that serves up a local food breakfast- all served and prepared by volunteers in a big house on the old west side of Ann Arbor. We walked in and were offered a marker and some masking tape to make ourselves nametags. While we waited we were able to get some coffee, and then we wandered and took in the environment. The house is big and lovely, and is the home of the two owners. There were tons of people, seated all throughout the house. The grounds were beautiful- chickens, vegetables, a farm had set up their CSA drop in the driveway. There was a covered box at the front of the yard that directed you to put your name down and there would be a fresh loaf of bread for you on the day you'd like it, with a simple donation box next to that. We were seated at a large table that spanned an entire room. There were probably 30 people seated around it, and we greeted those closest to us. We ordered from the small menu, and sipped our coffee and took it all in. The food was fresh and delicious, and clearly an intentional kind of meal- fresh lettuce and a single egg, zucchini fritters, a cucumber yogurt sauce and a single piece of bacon. It was the perfect amount. At several points on the table there were quart mason jars with little signs that said "Suggested donation: $12-15", and they were full of bills. The money, in the end, goes to raising hoop houses for local farms. Jeff and I left the place buzzing. We were so inspired. I remember thinking- "THIS! This is the culture of change I've been so thirsty for." The whole thing was so empowered, so loving, so about people and good food and trusting each other to just participate. It's what I think we can realize as a culture if we all put our minds to it.

The second example is from a friend of mine. She's unexpectedly pregnant with twins(!), and is planning on giving the babies up for adoption. It's a complicated situation, and she's been so brave and awesome through the whole thing. Anyway, she is looking for a job, and was understandably concerned about the potiential discrimination she might face as a visibly pregnant woman. She sought advice on how to handle herself during job interviews, and she was told many different things. One person advised her to hide the pregnancy and not say a word about it, as it's illegal for employers to ask anything or have it impact the interview at all. She was talking to me about this, and I got the same feeling that I do about locking my doors. I told her that I thought she should tell them all about it and level with them, and my logic is this: If she hides it, then she shows up on her first day and they would know that she'd been dishonest. Why do that and create that kind of divide first thing? If they were to discriminate and not hire her based on the pregnancy, then that is their bad. I mean, of course I don't want my friend to have trouble getting hired, but I also don't want her to work for discriminating assholes… so I think she should be herself. Who, by the way, is a fabulous woman that I'm proud to call my friend. In no way would it be her fault for not getting hired, and really, how do we create change without sticking our proverbial bellies out there and working to claim what we deserve?

Anyway, those are my thoughts. I believe that this culture exists within each of us, we only have to find each other to have it realized. I believe that in order to bring this out, we have to focus on empowering each other to do what's good, rather than reinforcing the barriers that keep us apart. I think most of us desire this, and we only need reinforcement and community to take the next steps.

Recent blessings from the Universe (aka: side of the road finds!):

Awesome mirror that really just fits perfectly into my house. 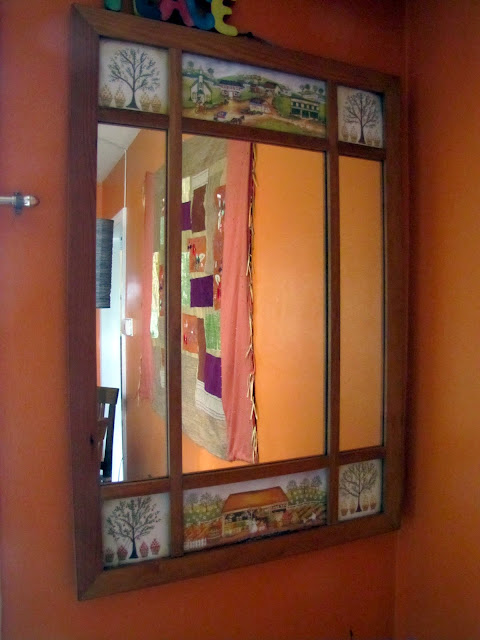 Rug that I actually like! Rugs are really really hard to get right when not buying new. So this one, even with it's few stains (which I'm pretty sure will just shampoo away) is extra special and really has helped to make the space more comfy. 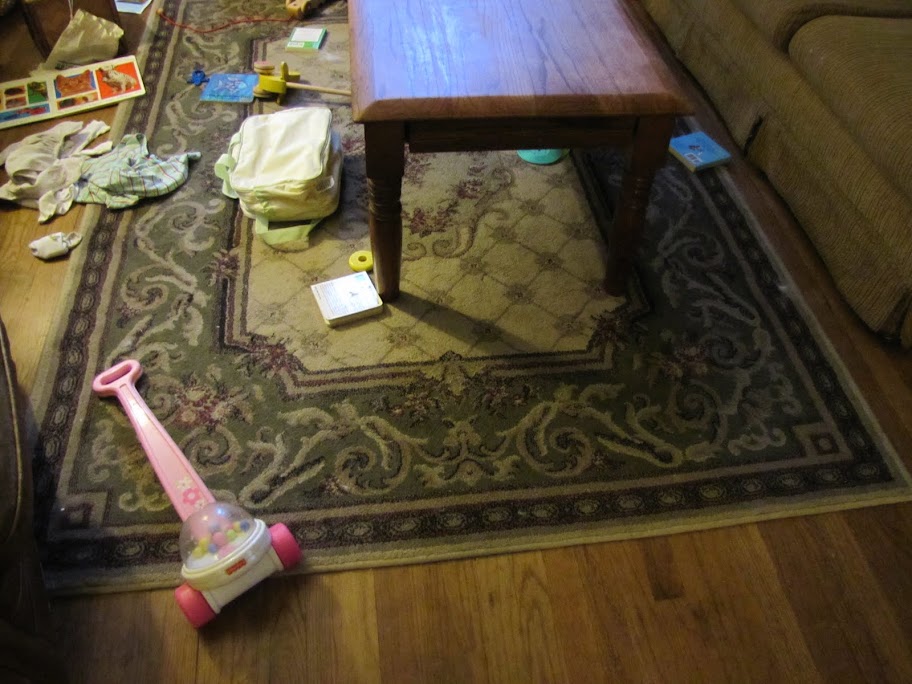 I still love my blue rug, I just moved it out into the open. 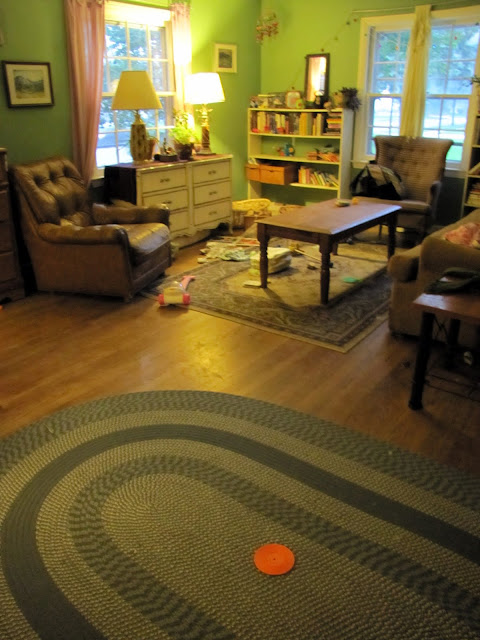 Door with windows! It doesn't shut all the way yet, but it is a big improvement on the last door. This one opens up the space and is not covered in the glue from old duct tape… So YAY!!! 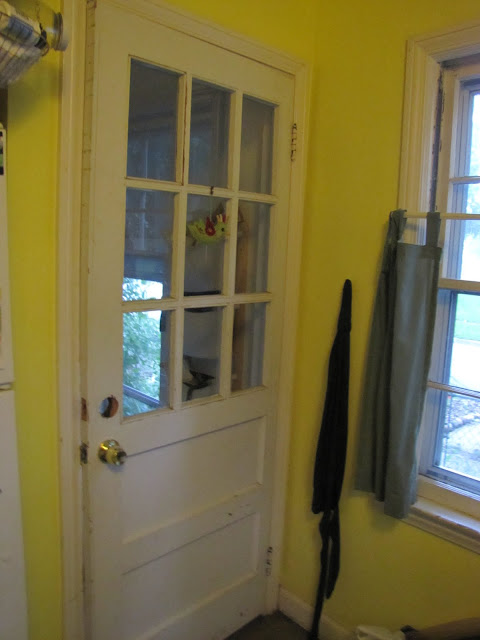 We celebrated the Autumn Equinox with some good friends. It was just lovely and perfectly fall-like. 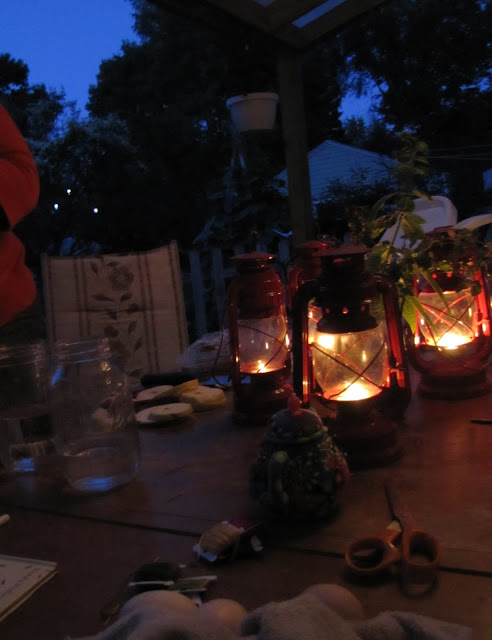 We had: Butternut squash soup, kale with maple syrup, acorn squash gnocchi, and slow cooked beef with garden veggies. All of it was so incredibly yum and perfect. Mmmm. 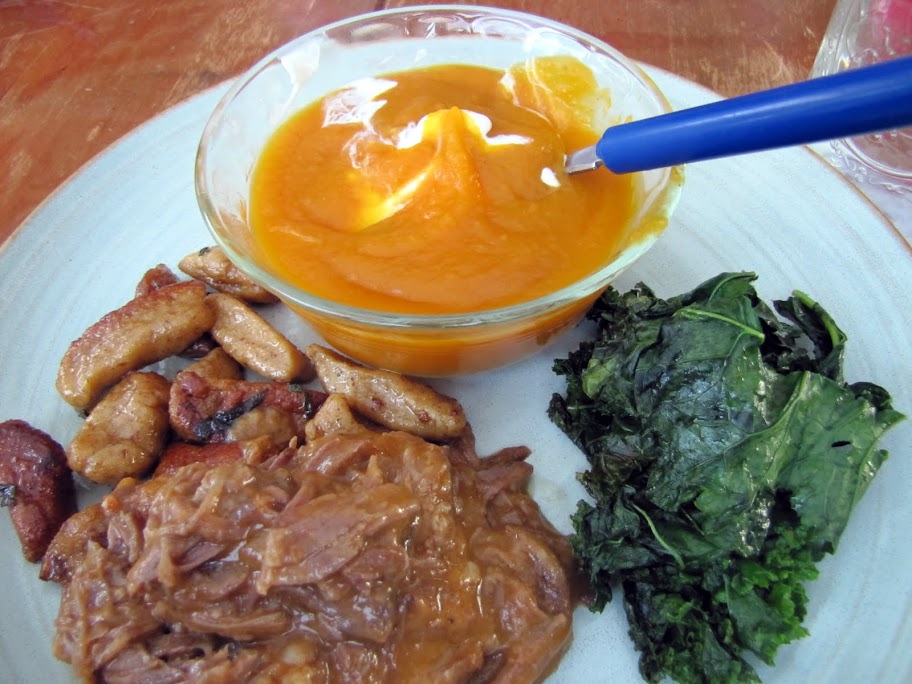 We made these cool little doorway blessings with the kids. They were just slices of apples strung on embrodiery thread. They are so pretty! They will dry out and make nice autumn decorations. 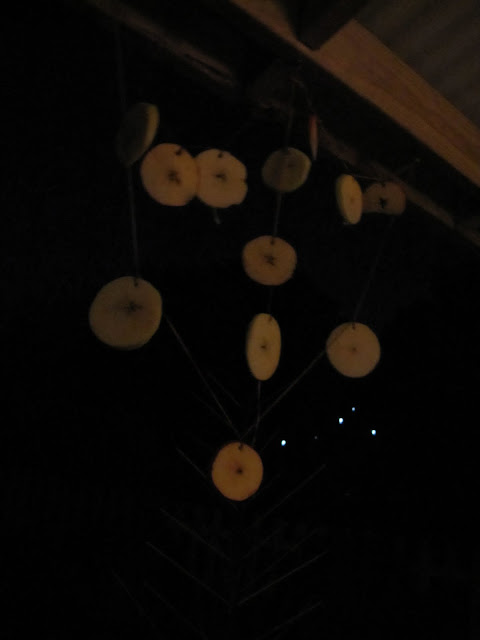 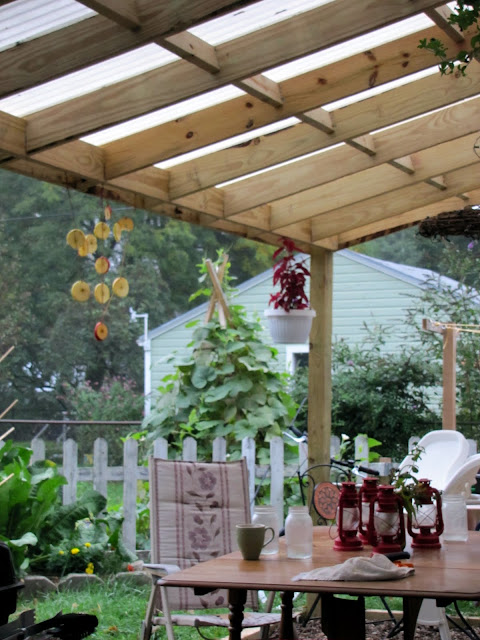 Family. Oh how I love my family. The girls gave my dad a gift certificate for his birthday to take him out to a "Big Girl Movie" with popcorn. They went to see the Lion King, and it was Vera's first time to the movie theater! She was so nervous! But they had a great time… and how cute are they? Cousins with their Grandpa. 🙂 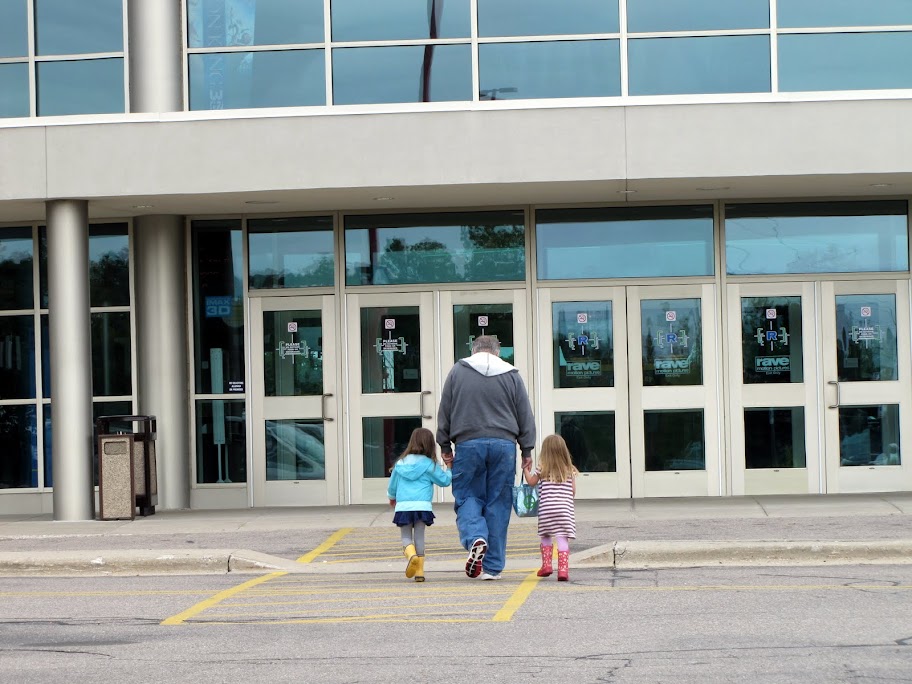 My dad playing with Asa, who is donning a little batman hood thingy. 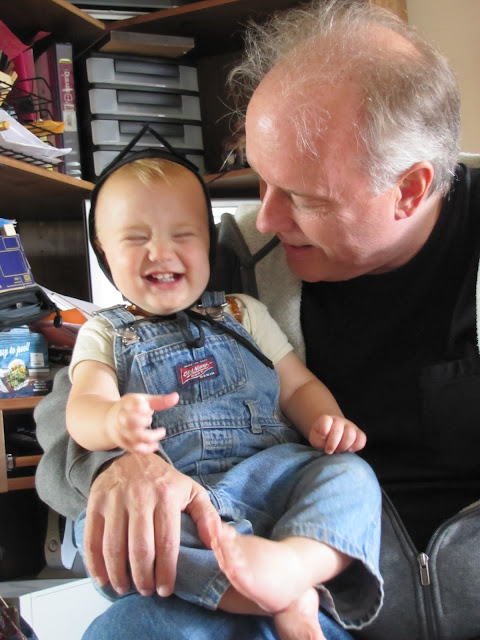 This happened when LJ was being dumb, but I wanted to share about it even if it is a month later. My dad celebrated 40 years of sobriety this past August, and there was a big party for him. People spoke and shared all about how he had impacted their lives. I was proud. I am proud. My pop. His artist friend made him this funny necklace. 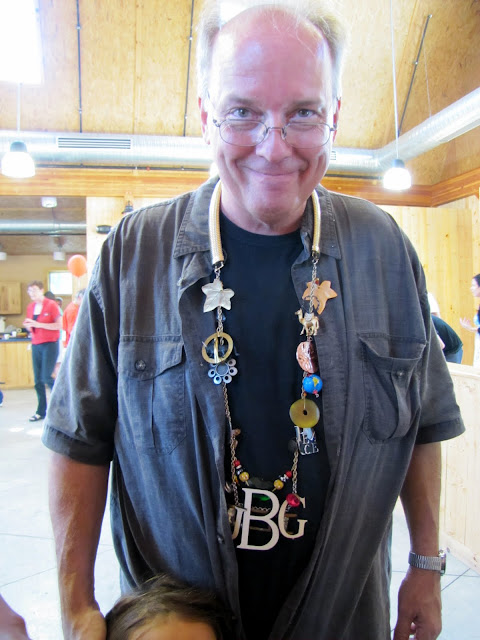 My brother came home for a few days in the midst of his tour. It was great to see him and his band and just hang out together. L to R, it's Clara, Asa, Jeff, me, Tuula, Ben, Vera, Max, Gretchen. 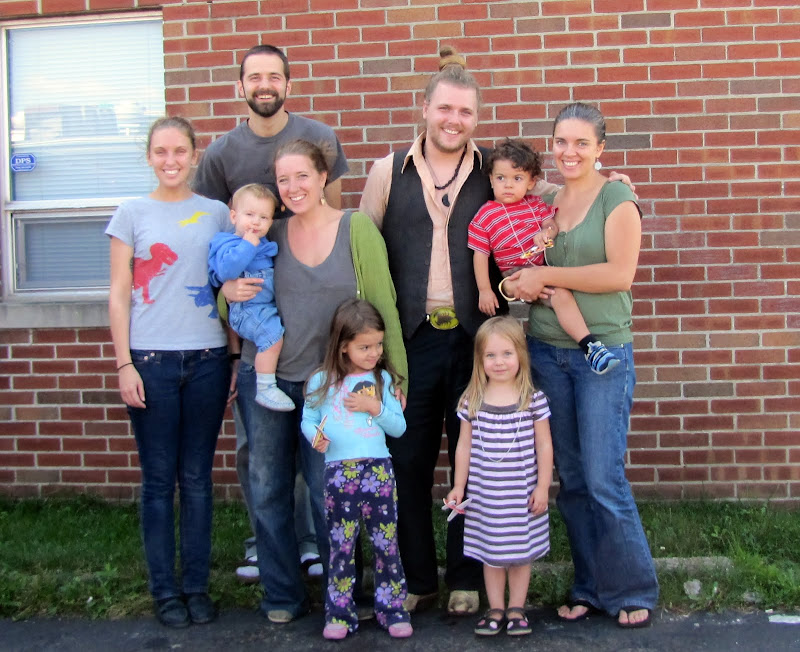 I can tell that he's really been working his music. I'm so happy to see him really doing what he set out to do, and doing it so well! I think he's so talented. Check him out below. He's the one on the right singing. Love it!

Lots happening here. Here's a before: 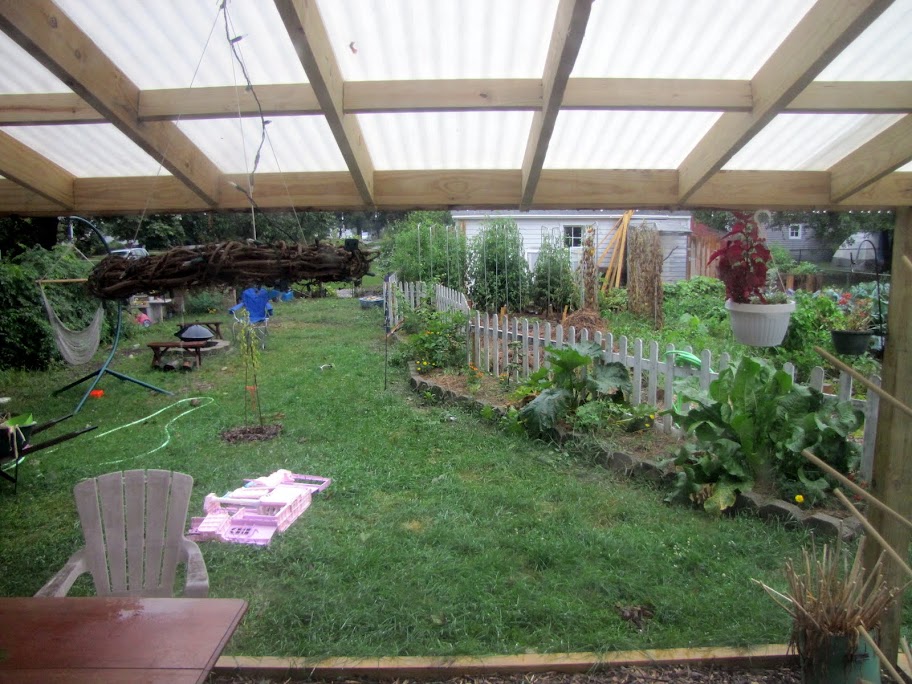 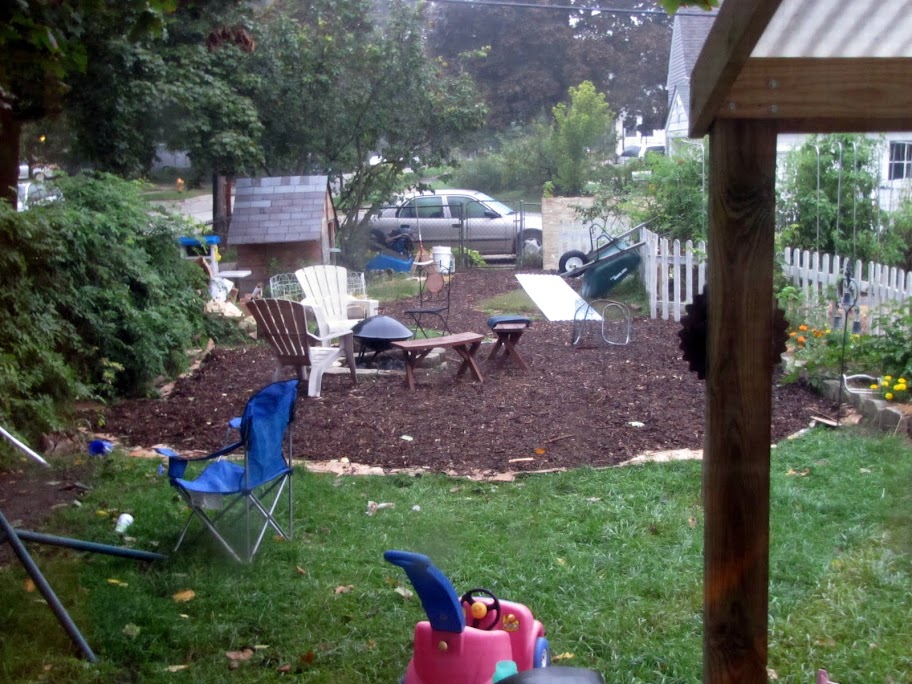 It's only halfway done, but we're working on creating pathways and a mulched fire pit area. Today we spent working on the greenhouse. Huzzah.