We harvested a rooster. We had Fred and we had Rogers, and 11 hens. We thought this was a fine male to female ratio at the start, but we learned quickly that a 10 to 1 ratio is probably better, or even lower. I am interested in how to train a rooster to be friendly (which I have heard is very possible), but we just didn’t have the time or know-how last year to do that. Before we knew it we had these adult roosters who would charge us randomly. Their spurs are serious business! I’m fairly certain I will have a scar on one leg because of it. But essentially what happened is we found ourselves in over our heads. We’d either leave them locked in their yard, or, if we let them free range for the day, we’d carry a stick with us to protect us. The kids were rightly scared of them. They crowed at all hours, fought each other constantly, and we just knew it wasn’t working. Also, the ladies were showing signs of stress from all the mating. I have learned some feather loss is normal from all the mounting, but I wasn’t comfortable with this level of it. We even started to wonder if we needed a rooster at all. Is it worth the hassle? Are we even thinking of incubating our own eggs any time soon? 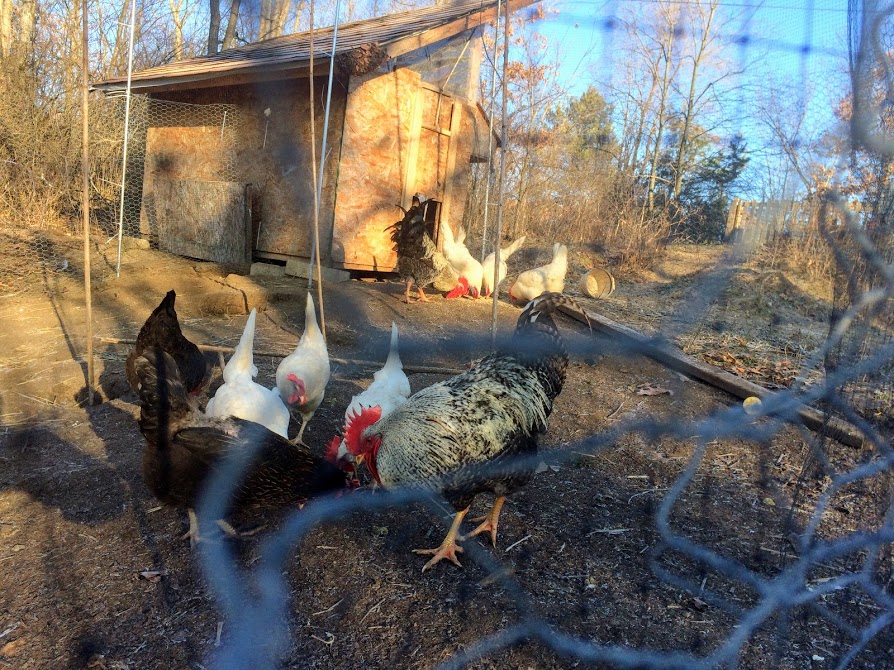 So, around the New Year we resolved to butcher both roosters. But we stalled- it never seemed like the right time. Then we had that opossum incident, and another incident with a visiting dog where it became evident how effective a rooster can be at alerting us to something being wrong. I watched them closer and saw how they subtly corral and protect the ladies all day long. They definitely do a job, and it’s very cool to watch and learn from them. Also, through all that observation, we did see that it was only one of the roosters, Fred, who was causing all the trouble. He’d kick at us through the fence when we approached to give them treats. It was just constant overreacting and aggression from him. We also started to listen to who was crowing all the time, and again, it was Fred. Crowing all dang night. Rogers, on the other hand, had taken a funny role in opposition to Fred. He, with the exception of a couple of minor incidents when he was a young guy, hadn’t initiated any aggression towards us. He would crow here and there, but not incessantly like Fred and not during the night either. Rogers would also make us laugh when we realized he was correcting Fred all the time. Fred would kick at us through the fence and get uppity? Rogers would attack him and then go back to his business of foraging or whatever. Fred’s crowing like crazy? Rogers would often kick him mid-crow, cutting him off. My one regret in all of this is that I never got a recording of that mid-crow kick. So. Funny. Fred would revv up and… “ERrrrr errr EEEERRR!!! *Swift kick from Rogers /choke/ and sudden silence*” I still just hear it in my mind and chuckle about it. 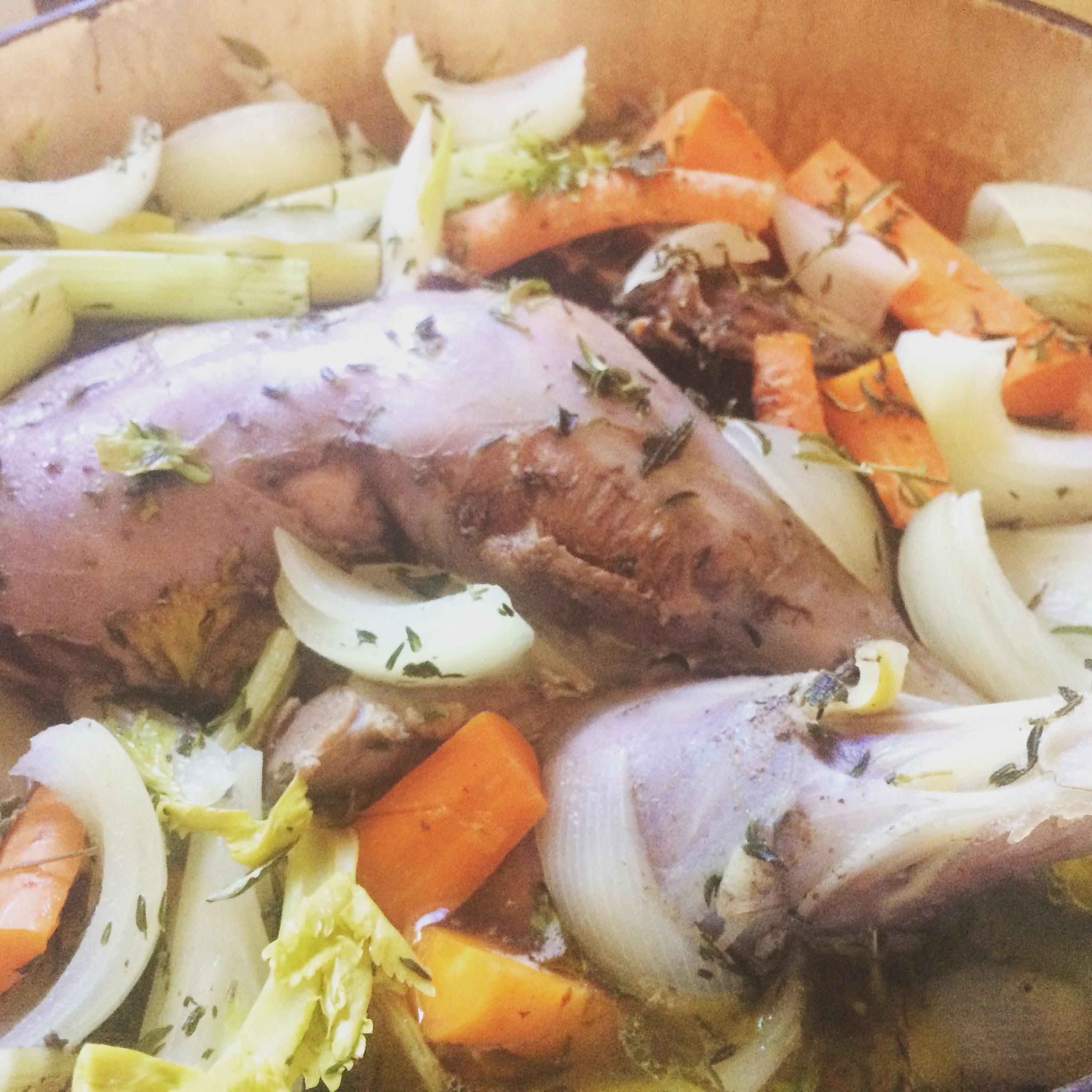 There was another incident where I just opened the coop to put food in, and Fred forced his way out the door and charged me over and over. I ran and grabbed a shovel, but he’d already gotten me pretty good in the shin. I’m flailing and trying to keep my cool, but if you’ve ever been attacked by a crazed rooster with a solid set of spurs, it’s difficult to figure out how to handle things. Before I knew it, though, Rogers had followed him and they started fighting. Their neck feathers puffed and they circled and kicked and circled and jumped over each other in a kind of feathery ninja dance. Very fun to watch. It was hilarious and I was completely out of my league. Then Rogers just… won. He just kind of took charge, beat on Fred a little, and somehow got him back in the coop and then followed behind him. I was a bit stunned, then just shut the door behind them and felt like Rogers defended me against a bully. Like “Sorry dude, Fred’s a jerk. I got him back in the coop, no worries now. Thanks for the food this morning.” Needless to say, I picked my favorite rooster.

So we found ourselves with some friends a few weeks ago and they got to see this funny dynamic. They even got to see the mid-crow-kick! But that evening we found we had time and energy and encouragement from them to get the job done. Jeff grabbed Fred, we thanked him for his life, and that was that. We had him in the pot before dinner- although ended up eating the meal a couple of days later because he needed a long slow cooking. But, he was wonderful. I used the whole bird, and we ate every bit. I made kind of a chicken shepherd’s pie first, since an older chicken can be a bit tough so I wanted to serve it in a way that would creatively deal with that problem. I used the gizzard and liver and heart in the gravy, and cooked it all up with onions, carrots, celery, brussels sprouts, parsley, etc. and topped it with mashed potatoes. Yummy. I made stock with the bones and feet, and used that plus the rest of the meat and the leftover shepherd’s pie in a soup that I added mushrooms and wild rice to. The second meal was even better than the first. That stock was so flavorful and the mushrooms were perfect with it. There was something more… chicken-y about the flavor of this meat. Like, the same difference in energy and flavor that one might experience with a homegrown tomato or a carrot versus the standard one you can get from the store. Everything out of your own garden tastes just a bit more alive and individual. Well, same with a home grown chicken, I’m finding.

Since the harvest the flock has been much more peaceful. Rogers is fully in charge, the dynamic between all of them is much more orderly. I think they are happier, honestly. The crowing is pleasant now, and there have been zero attacks. I even got a little nervous the other day when they were with me in the garden and I had to gently shoo them away, but Rogers took it all in stride. He watched me, for sure, but I just get the sense he’s discerning. Today I fed him some grass from my hand, no problem. Pals, I think.

We are getting excited to expand their coop and yard into the (hopefully?) permanent spot. It’ll be big enough to include the new chicks, expand their yard by quite a bit, and it’s a nice level-ish wooded spot near the house that won’t erode so much as they scratch and forage. Anyway, that project is underway, but I’ll write more about that when it’s closer to finished. 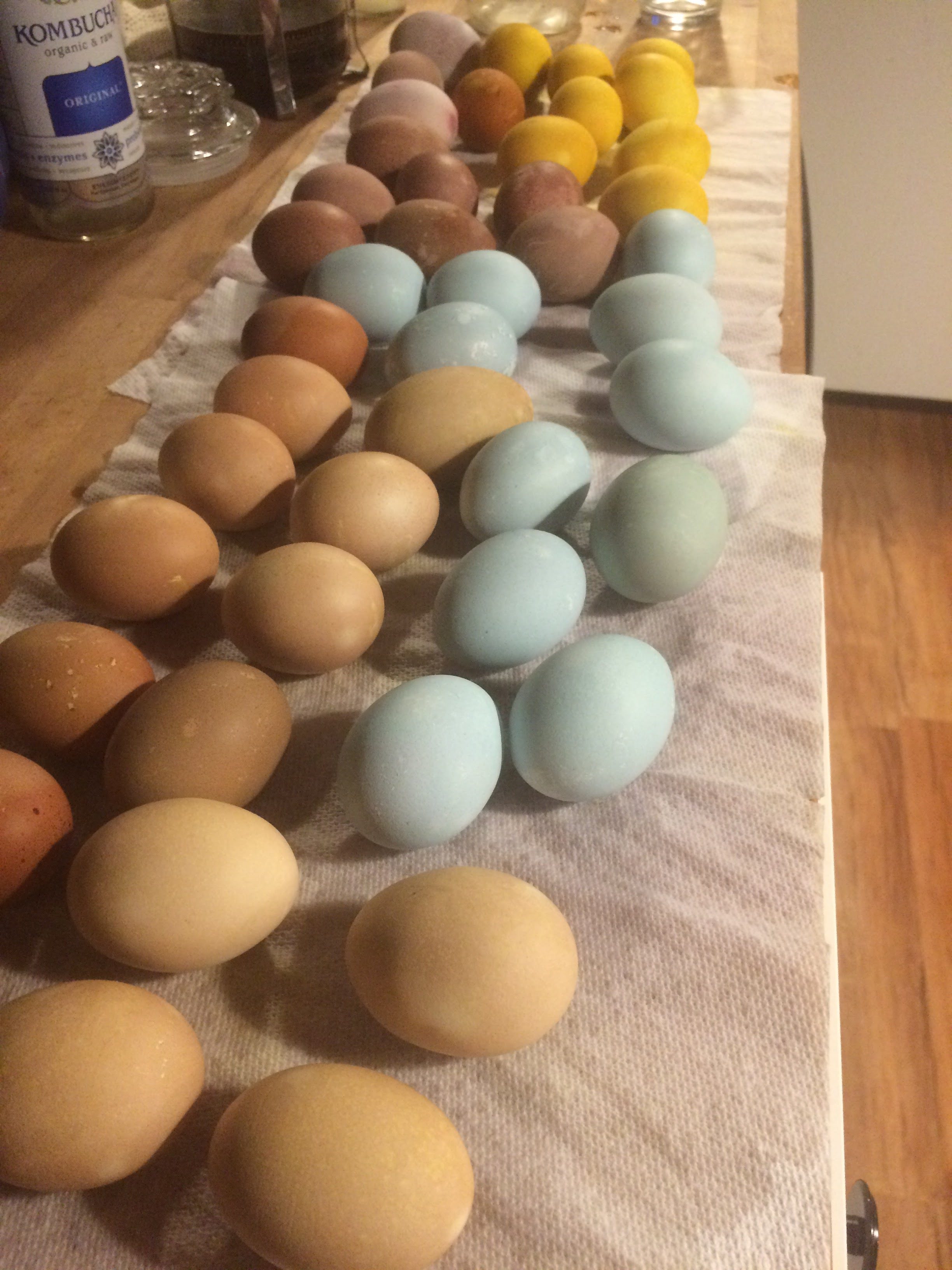 We have a lot of extra eggs (10-11 chicken eggs a day), which came in handy for Easter. I dyed them with red cabbage, turmeric, red onion skins, and beets. It was my first time doing the natural dyes, and it was so easy and fun! We hosted our family and had an egg hunt on our land. It was so sweet and fun. So that’s great, but there’s only so much a girl can do with this many eggs. Frittatas are our friend. I can really use eggs, but I’m looking forward to developing more of a customer base for eggs. At the very least I can bring the extras along to market each week. 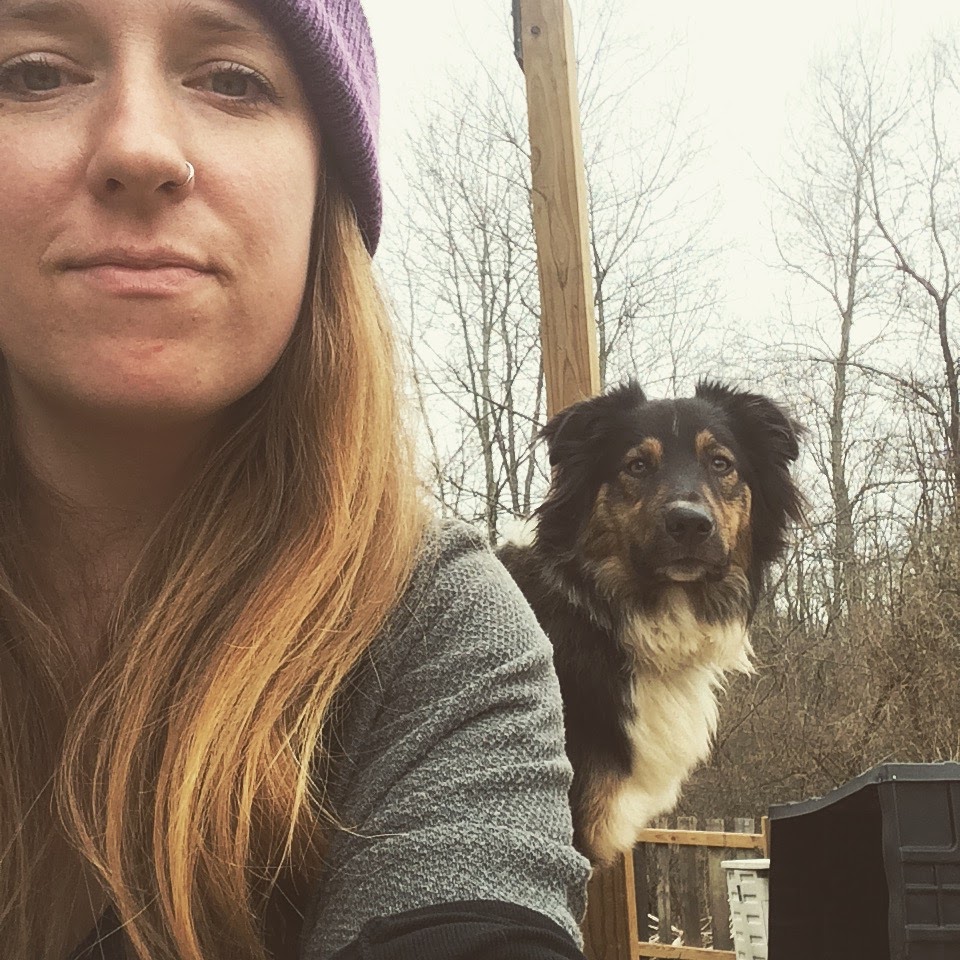 Flynn turned one year old at the beginning of the month! Hard to believe how much he’s changed and grown. He’s really a good dog. Intense and smart and not easy, but I feel like that’s part of why we love him. The one thing that was really hard for me with him in the early days was his intensity and energy level. I never got to snuggle with him- which I realized is part of how I bond with animals. Touch and sweetness. He was ALL wiggle and play and bite for like… 9 months? Then he just slowed down. He started *requiring* morning snuggles in our bed. If we try to hustle him out of our room he’ll lay on the end of the bed and protest. I walk up to him mid-day and he just rolls on his back and would let me rub his belly for days. Those little sweet additions to his temperament were all I needed to feel super close to him. He no longer chews our arms or nips our legs. He’s still a wad of energy and is by no means perfectly trained yet, but he’s family and we can all tell each other “I love you” in our own way. It’s good.