Due date has come and gone, but I feel fine about it. There’s really no such thing as "overdue" in my book. Baby is supposed to come when baby is supposed to come. But, it was funny to think yesterday that I’d put in my obligatory 40 weeks. I have been dealing with some feelings of restlessness- due in part to all the expectant people all around me wondering if anything is "happening", and also because I have lots of prelabor symptoms this time around that I didn’t have with Vera- it keeps me on my toes. With Vera I had some mild cramping about two weeks before for like an hour, and then when I felt anything funny again it was just labor. This time, I’ve felt mildly crampy every day for the past week or so, and there have been two nights in particular where I was so uncomfortable it woke me from sleep and I actually got up at like 4:30am. Thankfully, I’m not too frustrated with it because I know my body is doing good work, and my midwives say it’s much more common in subsequent pregnancies to have these symptoms because your body is just somewhat seasoned to it. I also know what labor feels like, and so I’ve felt pretty relaxed about the things I’m feeling because none of it has progressed into that. No false alarms yet, just… I’m a little tired. I’m also anxious to have my body back. There are lots of things I would be doing with my time (mostly stuff outside and in the garden) that I’m just not into right now. Soon enough. I think gardening will be a great gentle form of exercise in the early days after. Good for me to save it. 🙂

Did you know that babies born even a week earlier than they are supposed to can have difficulties nursing/breathing? It makes me squirm to think about all those babies who are induced/scheduled to come out who needed just another week. Of course there are situations where that risk may be safer than letting those babies stay in, but I think they are rare. Anyway, I thought about it because my dad was telling someone that he was waiting on a new grandbaby, and the guy said "Oh, did they schedule her induction? You know, if she goes overdue?" And then just on Sunday, I was asked what I was going to "do" about the baby. I just kind of giggled and said we’re happy to wait. It’s just funny, how much people try to control in terms of the biological process itself… I suppose those options are out there and people definitely utilize them. I’m much happier doing a little yoga and catching up on my reading. But it’s also getting a little daunting to go out lately. I can’t seem to go anywhere without comments. I totally understand them, but what I think people don’t understand about a pregnant woman is that she’s not used to having random people (or even people she knows) comment on her body every time she’s in public. It’s… weird. And I don’t really like being the center of attention, I’m a naturally kind of shy person. We walked up to the party store yesterday as a family, and the guy behind the counter said we should probably just go sit in the hospital parking lot (I didn’t bother saying anything about the fact that we’re doing it at home)… and then coming out a guy on a bike said "Oooh, that’s any day now!" That was just in a 2 block walk. I realized this probably comes off as whiny, but I don’t really mean it that way. It’s just a unique experience. The experience of having your body be sort of… public domain. Er, at least it’s treated that way sometimes. Anyway. Enough of that.

One of our brown chickens is laying! The egg right there on the top that’s a little lighter? That’s the one. It’s slightly smaller, and I could just tell it wasn’t from the barred rocks. It’s funny how you begin to know your chickens and what comes from them… Anyway, so we got THREE eggs yesterday, and I was so excited! I leave the coop area every day saying "Thank you ladies!!!!" and cooing at them. It’s so much better to get our food this way. 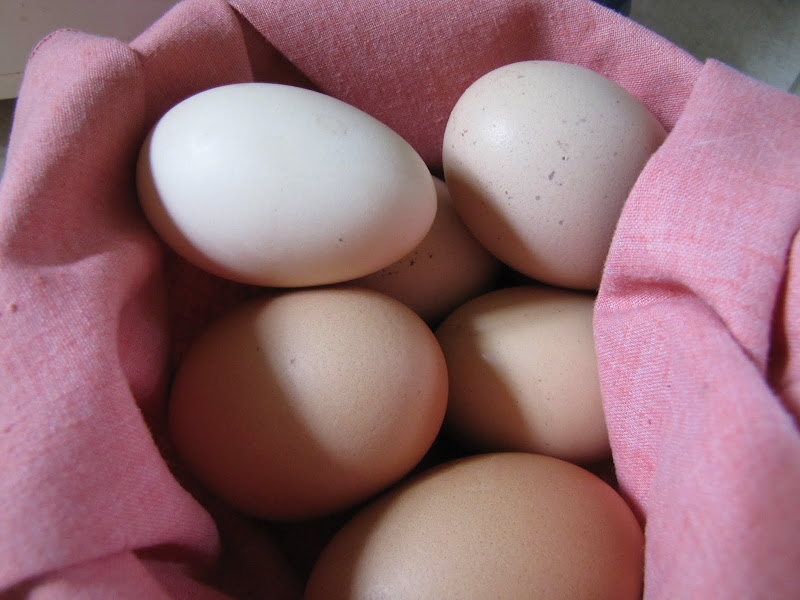 We’re expanding their run to where the 4x4s are. That’ll be the edge of our greenhouse. We want them to have more space. We plan to put up more roosting areas, etc. It should be a cool space. Plus they like to DIG. So we want a little more area for them to roam and forage. I’m also thinking that we’ll set up an indoor compost with the red wriggler worms- both to give us fast compost (we don’t really utilize our outdoor one for actual compost, we just keep throwing food scraps in and it never seems to get full…) and also to give them live food. Apparently those worms reproduce like crazy! 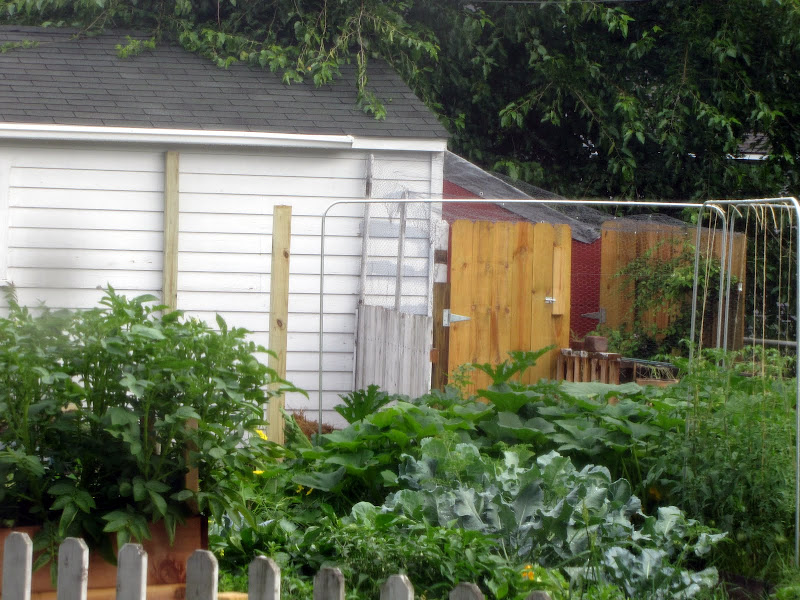 And just a little blurry Vera. Sweet girl. I think she’s going through some kind of a mental/physical spurt lately, in addition to knowing that things are about to change, and it’s made her both wildly entertaining and also pretty whiny and irritating at times. I think she’s just working it all out, so I’m doing my best to just communicate and stay patient with her. Her language is really developing, and we just have whole conversations. It’s so SO fun to have whole conversations with your two year old, just so you know. Her favorite song is definitely "The Lion Sleeps Tonight", and her favorite book is Pig’s Picnic. 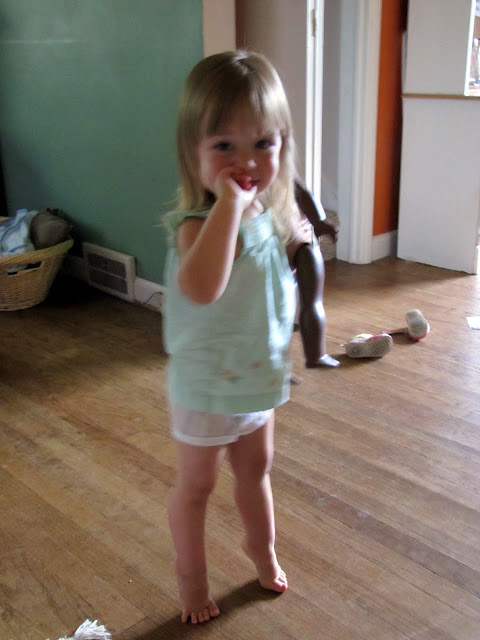 Jeff and I have talked about really using the next month with her well (while Jeff is home). We’ll take trips to the zoo, to the beach, etc. But I’m thinking we’ll also have daily rituals. Like, we all have breakfast and then Mama & Vera go for a walk. Then later Jeff & Vera do something specific. Something that we can stick to even after he goes back to work.

Oh, and last but not least- garlic. I waited too long to braid all of it, so I’ve got a basket full of the stuff that was too brittle. But this I was able to braid and just hung it in my kitchen for fun. 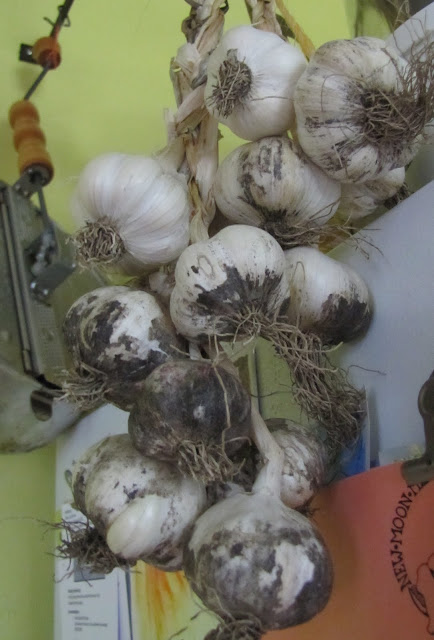 Over the next few days my plans are to stay occupied and relaxed. I’m going to do more garden research- it’s time to plan for fall and see what else needs planting now. I’m going to work on some crafts- I still haven’t done V’s big sister doll, but I think I can whip it together quickly, even if baby comes before it’s done. I can always tie up loose ends around the house. I’m liking doing this simple yoga- it’s just 10 minutes of peace. And I’m able to actually get some reading done lately. Maybe I should whip up one of those reading pillows for myself. It could come in really handy in the coming weeks. Ishmael is shaping up to be really good, of course. I’ll have more to say on that book very soon.