I woke up this morning at my friend’s new farm. She lives about an hour from me and so we made a sleepover out of our plans. Her place is different and has a more classic farmhouse feel. Old and full of history- the uneven floors and plastered walls, the acres of green highlighted by the bright white of the house and the red of the barns in the distance. The animals free range all over the place, and she’s got a turkey mama laying on a clutch of eggs in a grassy field. She’s got goats coming soon. It’s lovely, and has a different flavor than our slapped together wooded homestead near the city.

Last night on the way to a birthday party we stopped to pick up some ducks that she was being given by a woman who wanted to downsize her flock. 5 of them, nestled in a dog crate in the bed of the truck, we chuckled to ourselves about how, these days, this is just the kind of thing we get into on a Friday night. 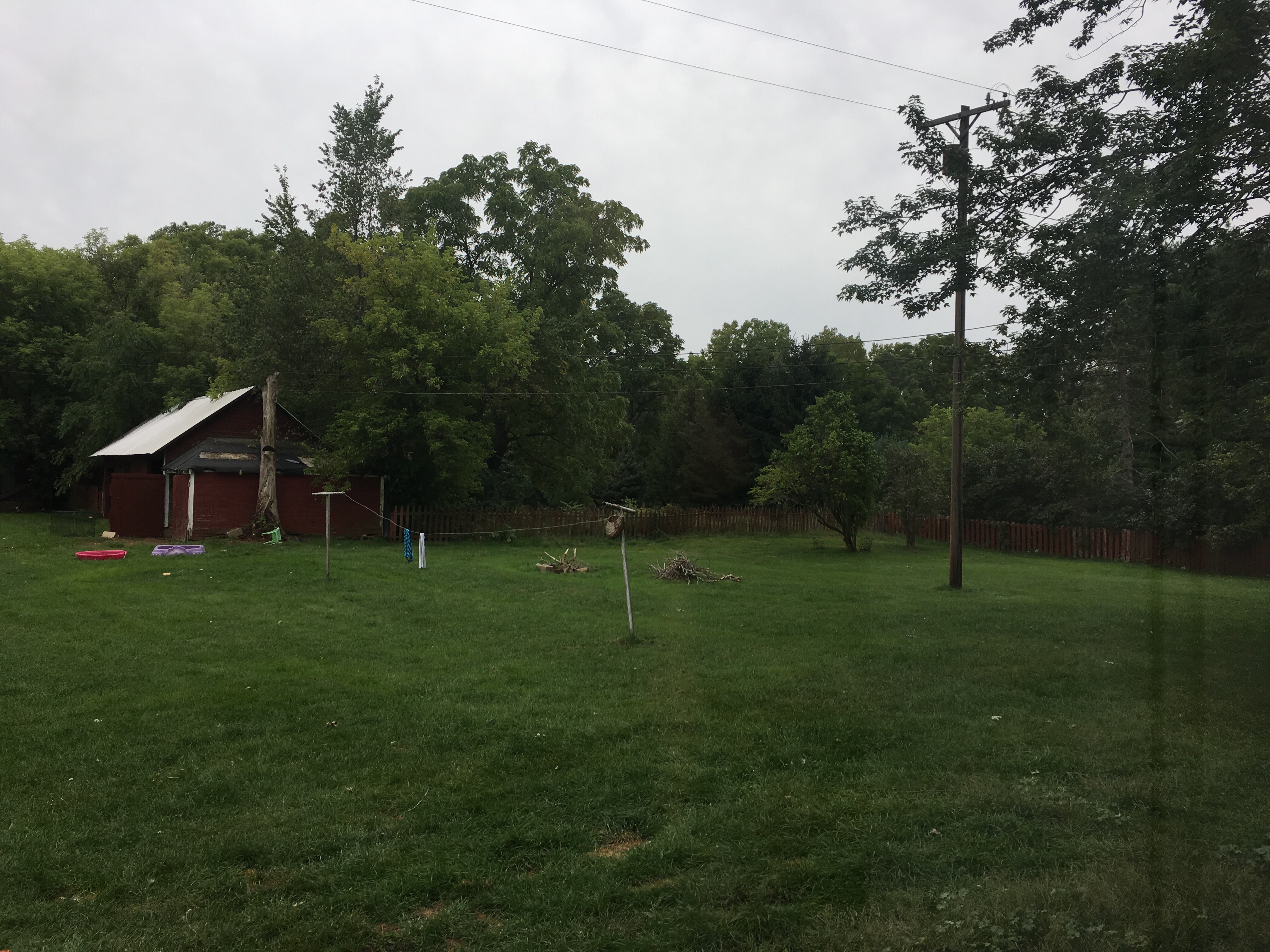 This is the same friend I lived with a few years back. Our paths are quite different these days, but we still share so much. Our intense history has lately just felt like privilege to me. It’s a gift to know a friend on that kind of a level, to be a witness to the complexities of their life and their person, and it’s a gift to receive that kind of a witnessing from them. It’s a gift to have both been hurt by the other and lived into a genuine kind of forgiveness that still shows up. There’s a really unique and meaningful solidarity in that, I’m finding. Intimacy, at the level I desire it, is pretty hard to come by. And so I suppose that’s part of why I feel grateful for it, however imperfect it may be. We certainly are a far cry from our initial communal aspirations, and our lives keep moving in ways unanticipated. And isn’t it that imperfection and that vulnerability that grows the belonging and the intimacy in the first place? That you still have your people on the other side of any of it? This is the latest manifestation of my vision for living in community. 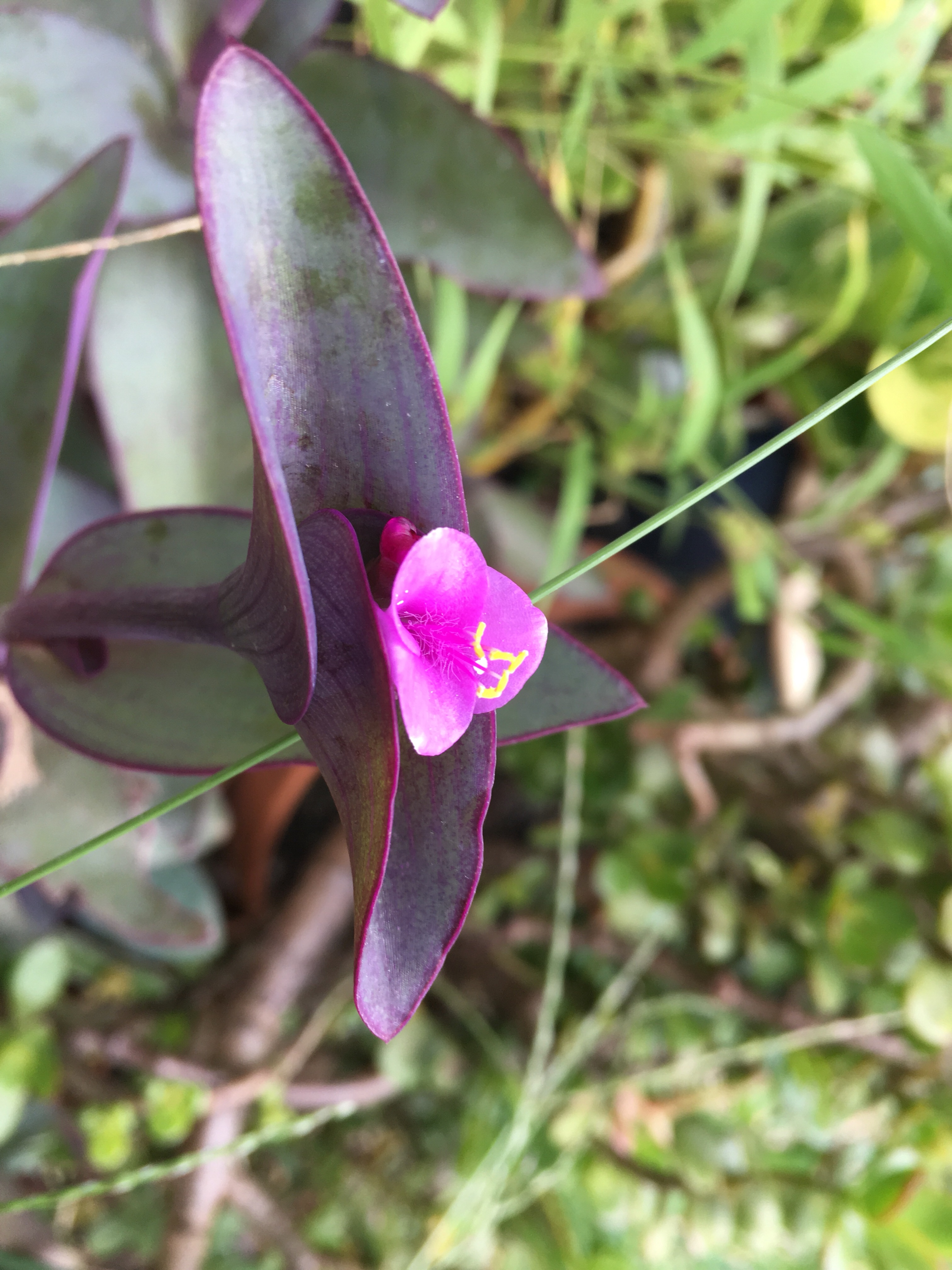 It’s getting chilly, and so I started to give my houseplants a second look and a thought about bringing them inside for the season soon. I’m actually pretty terrible at keeping houseplants. In case anyone thinks that the “green thumb” quality needs to be present in order to garden/keep plants, I’m here to prove otherwise. I just kind of do it anyway. I might be improving in my insights here and there, but I’m consistently amazed by how well my plants do under the care of the sun and rain for the summer. I almost feel like they indulge me all winter, surviving purely by riding on the life-magic that their summer of freedom gave them. The plant pictured above I’ve had since Vera was born (and so I suppose I’ve got *that* going for me, it has survived all this time…), but this is the first I’ve ever seen it produce a blossom! I was awed when I saw it. 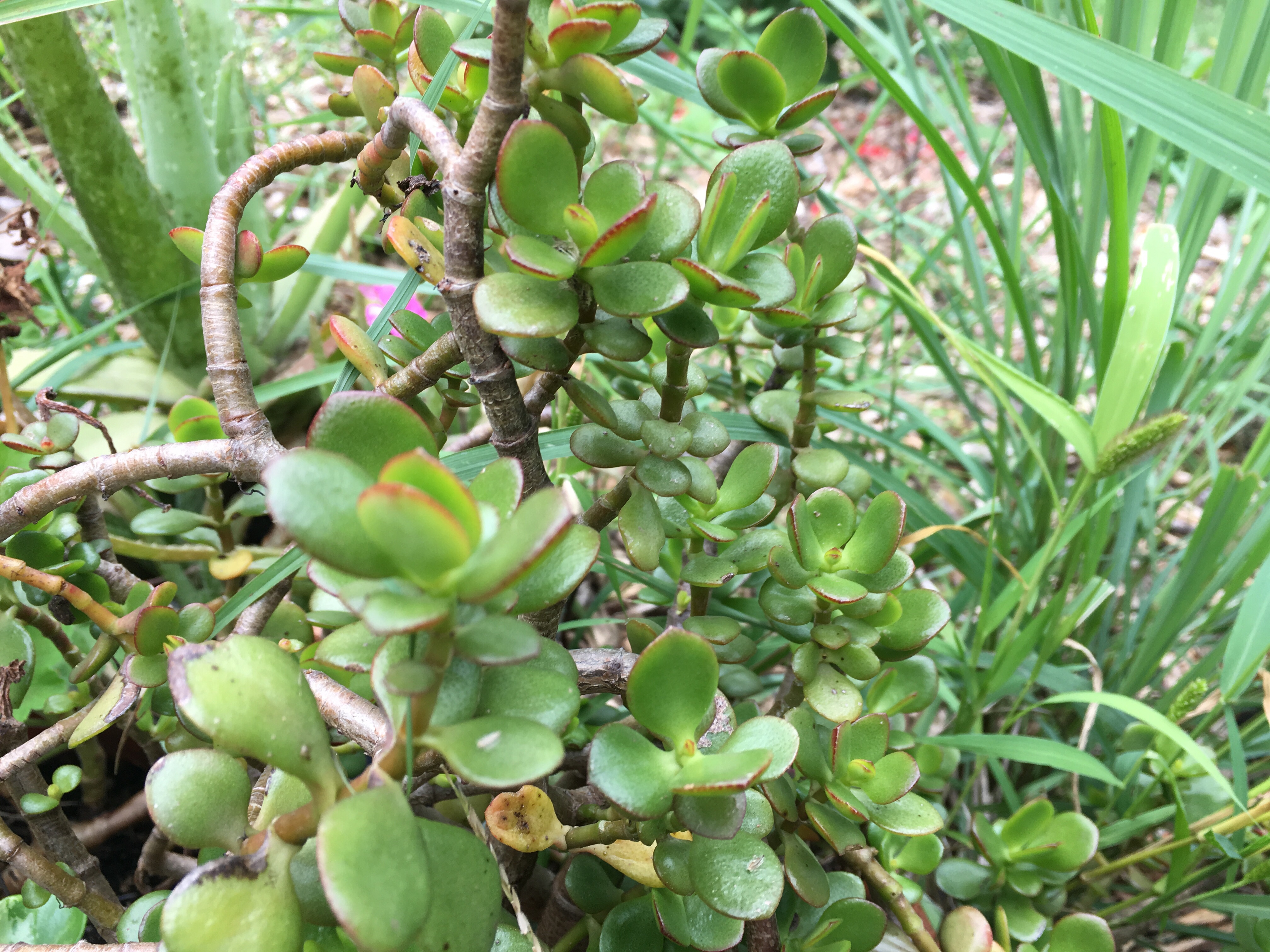 The jade plants develop new colors and definition that they lose when they come inside. I like my houseplant reminders- things aren’t nearly so good when I’m in charge, and so isn’t it a beautiful thing that I’m mostly not? 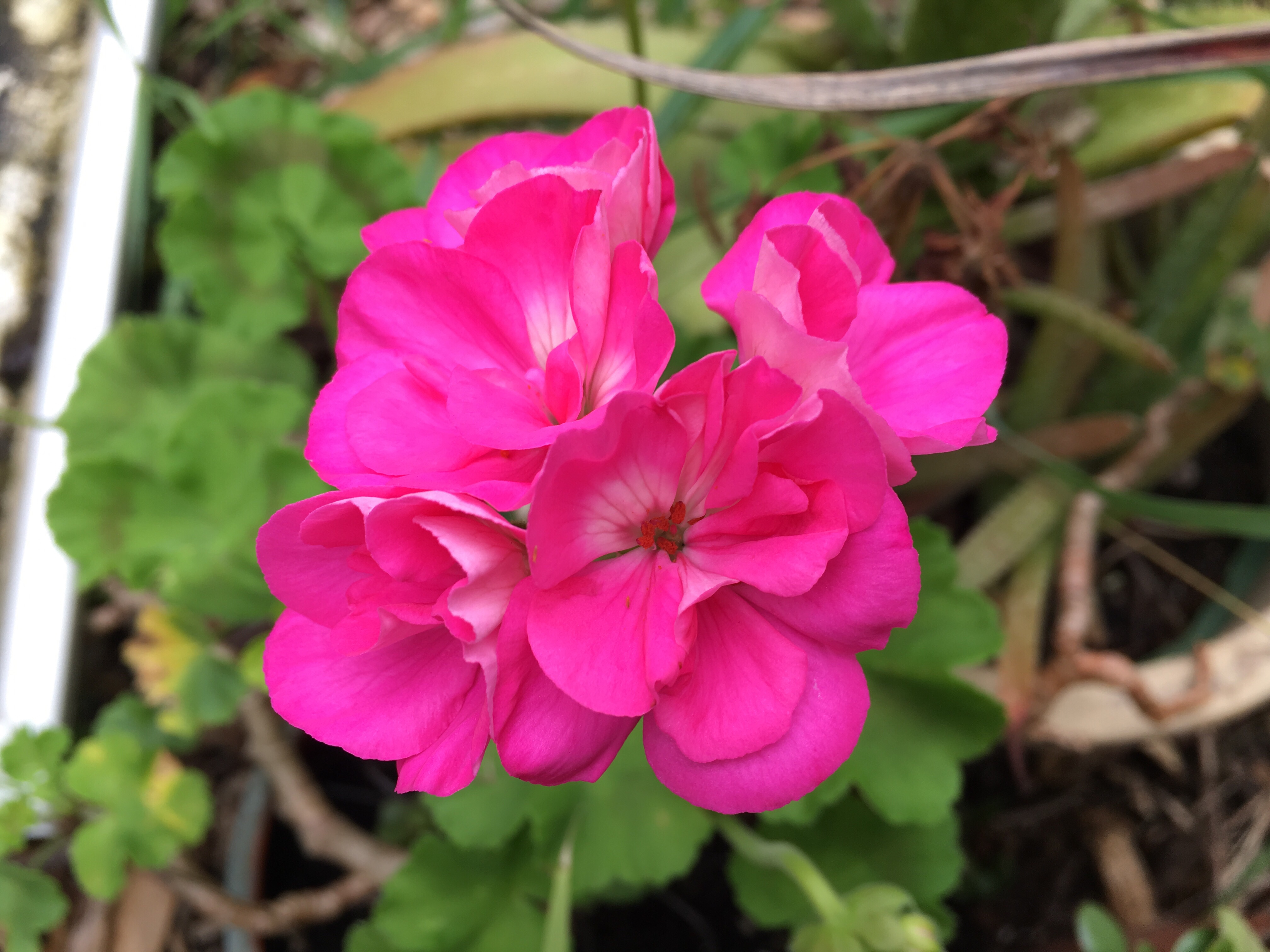 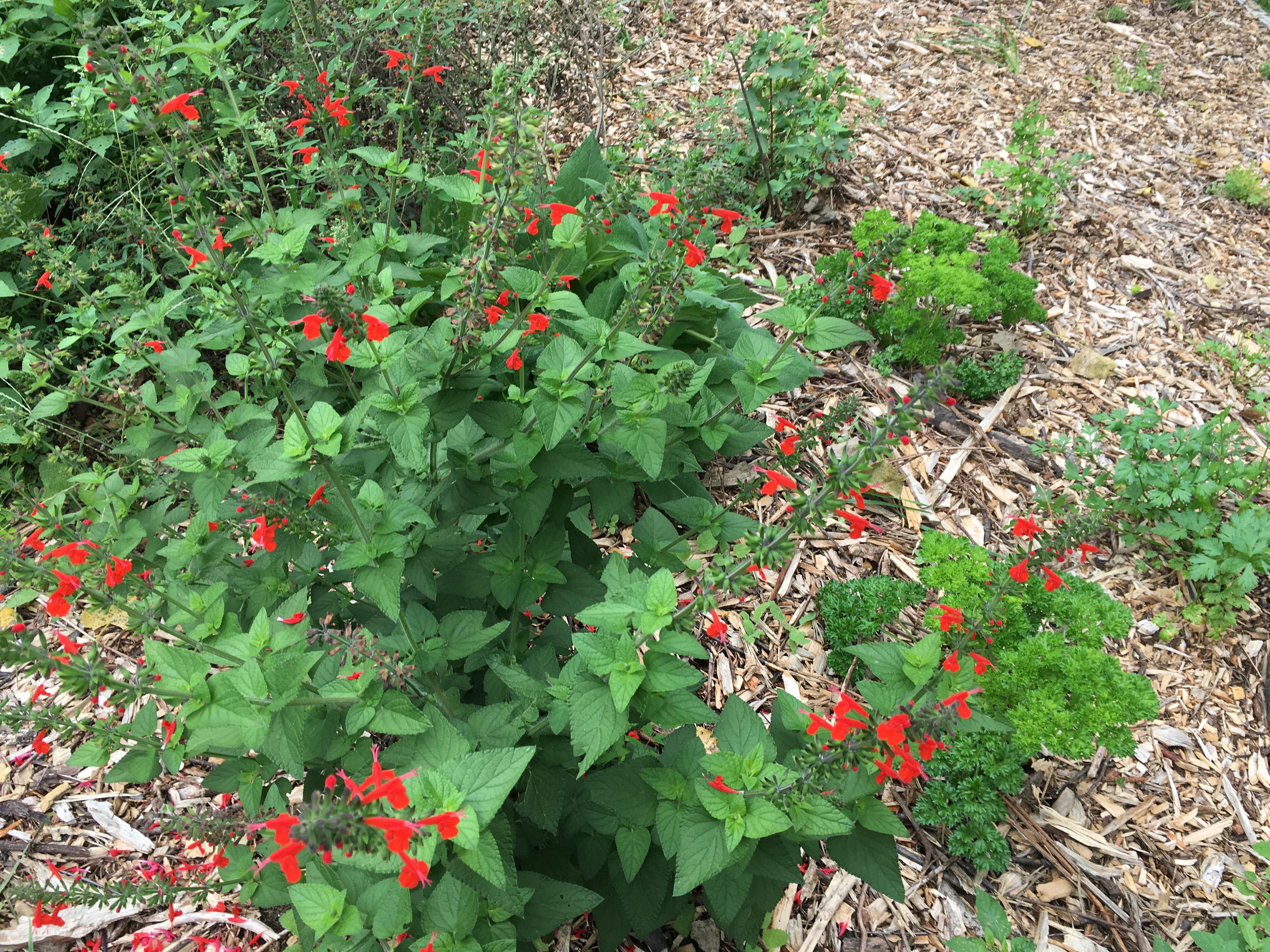 It was funny that last night my friend got these ducks, because I got a text yesterday afternoon that some friends needed to rehome 5 ducks as well (Anconas, which is perfect because we’d wanted to grow that flock a little but they never seem to hatch out a successful clutch). So last night Jeff received 5 new ducks of our own. You know, just another Friday night! 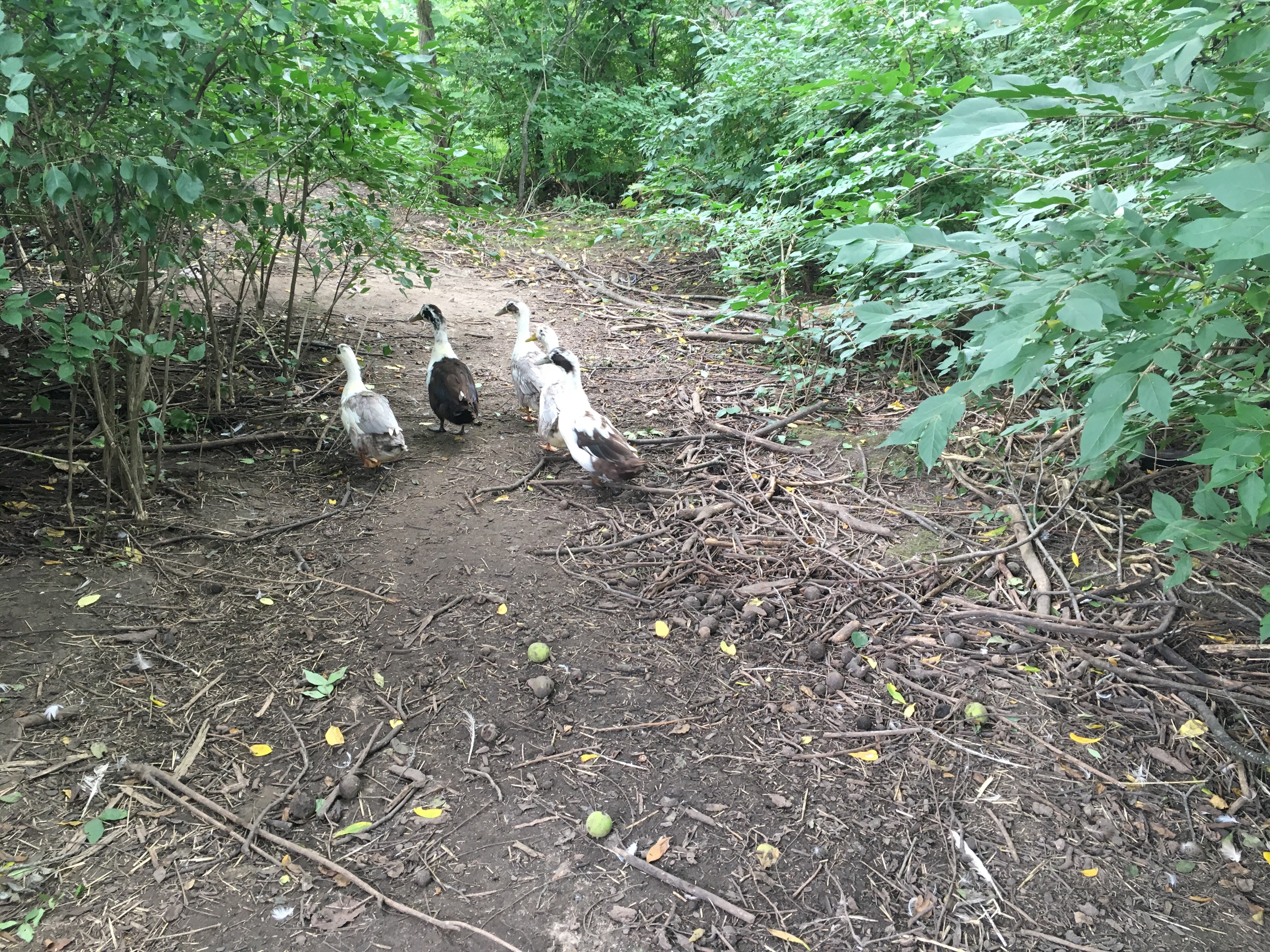 They seem to be doing well so far. Ducks aren’t the easiest thing to get a good close photo of. Although, while these new ones were running from me, everyone else was curiously following close behind me. 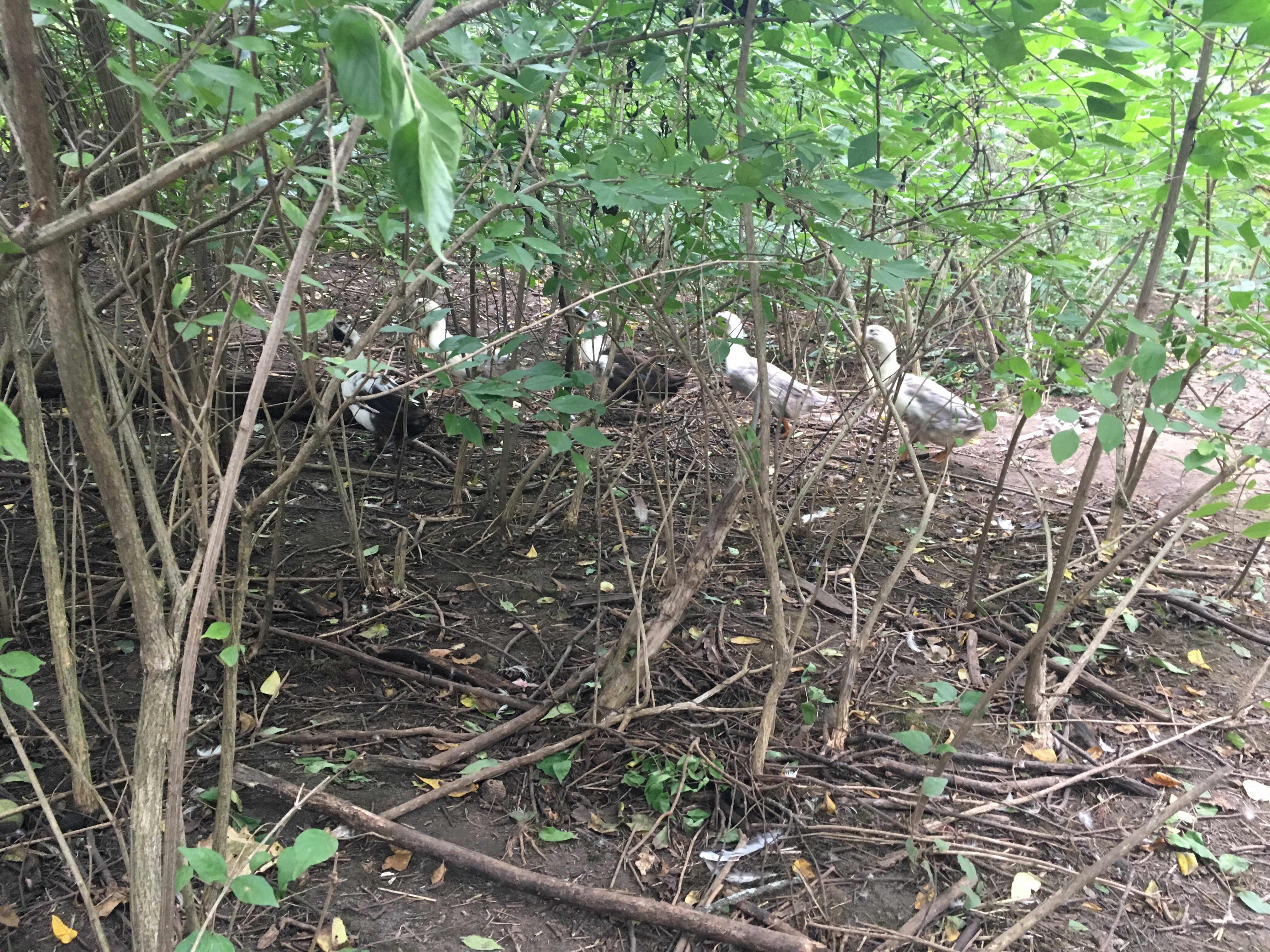 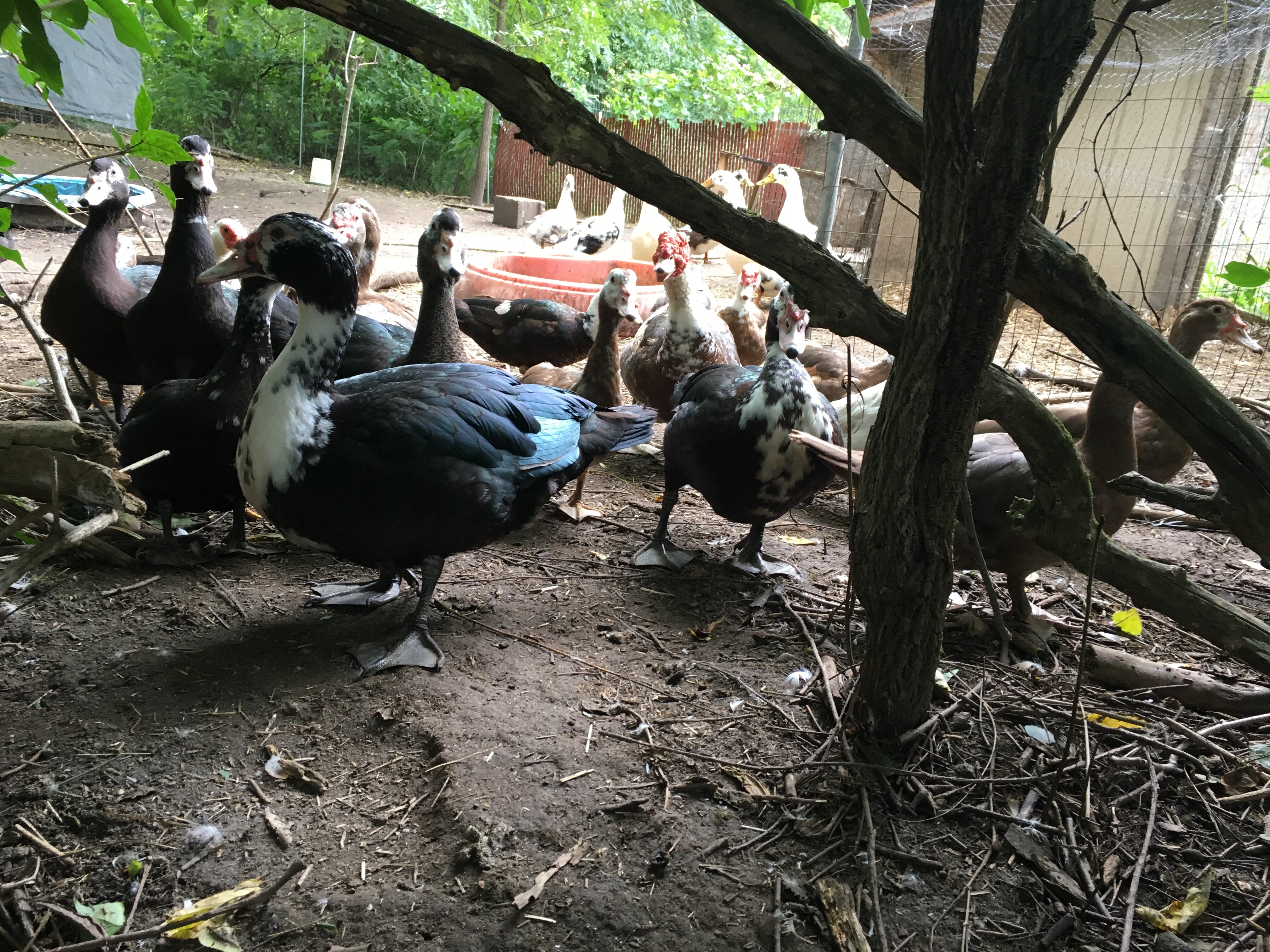 I’m acclimating to farm life fairly well, but there are unanticipated consequences. For example, I’ve lately received a fair amount of chicken/farmy art as gifts (which I honestly love, but also am self-conscious of becoming some kind of chicken lady… should I just surrender to it? I may have no choice. :P) 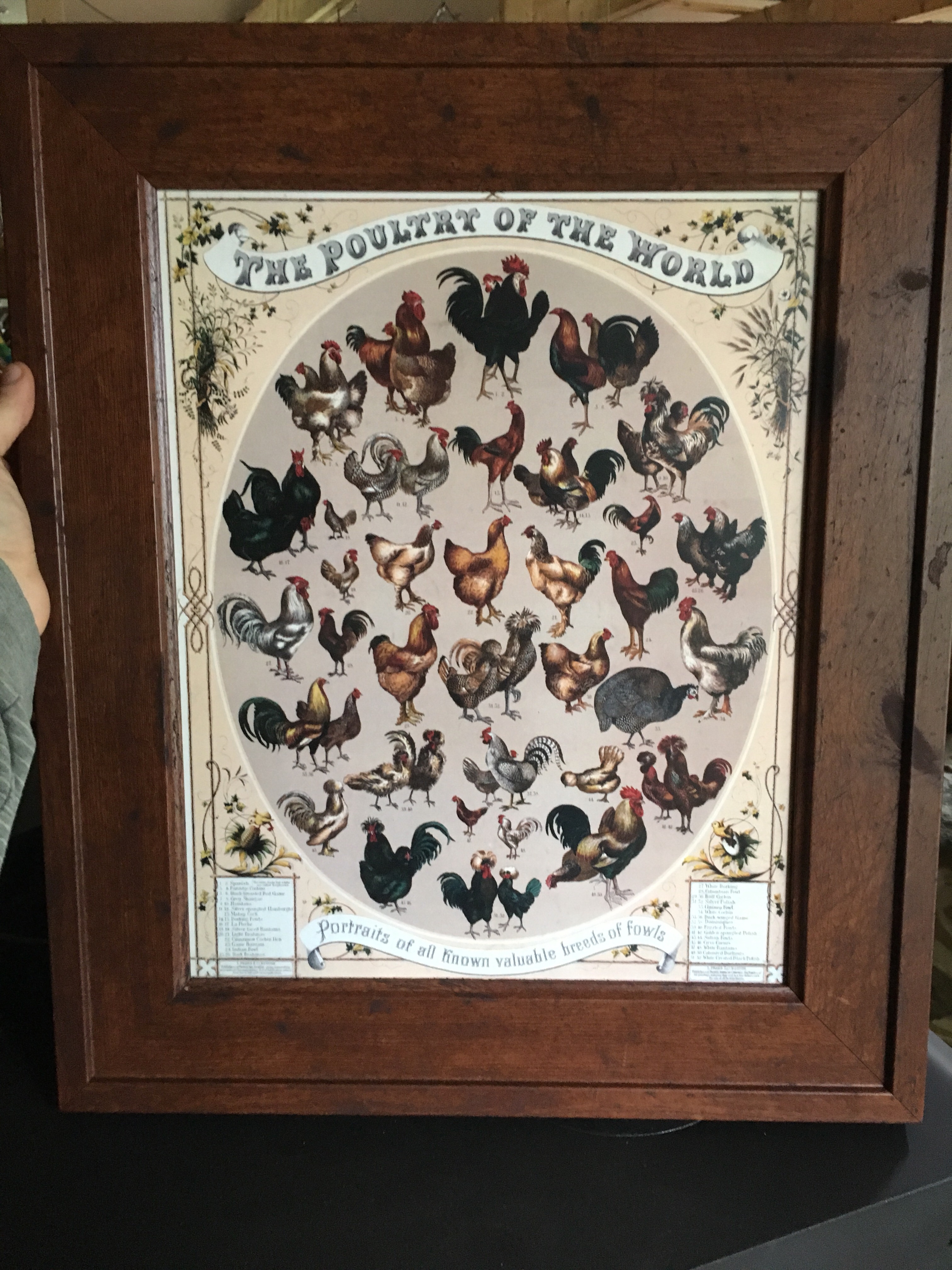 I also get asked every now and again to help people with their geriatric poultry or the surprise rooster in their city flock. I’ve obliged folks somewhat, but I don’t totally know how I feel about it and I’m mulling those emotions over. It’s not exactly like Jeff and I are just loving to kill animals now that we’ve folded the reality of it into our lives. I mean, we learned how and now we do it, but I’ve started to feel like other people should just learn and do it too. And it should feel kind of inconvenient and messy, and we should sit with that. I don’t actually feel eager to do it more than I need to because other people haven’t crossed that line yet. I imagine that most households took on the task of dispatching the backyard birds when the time came, for one reason or another, and it likely would have been silly (and even rude) to ask to give the job away. Don’t get me wrong, I don’t really blame folks for thinking of us or asking for help, and I want to be helpful, in theory. But Jeff and I will field another request and we will look at each other with a kind of guarded and complicated energy that I’m feeling curious about. How should we handle this kind of request? I’ve considered offering to help, but not to take the job from them- but of course that’s a bit awkward and loaded, I realize. It’s just been an interesting little byproduct of living like this within an urban community. I did get a very nice message from a woman who wanted to come help/witness the process (and she’ll have an opportunity soon!), and that had a completely different and very welcome feeling for me. I was grateful that she connected with me and that she wanted to participate and feel it out with us- it’s exactly how we got started with it. Now that offer is out there!

There’s a responsibility here, yes? I suppose my feeling is that none of us are particularly better suited to fulfill those responsibilities, and yet that’s the message I keep getting from the world around me, even amongst the most well-meaning locavore types. What’s a girl to do if she wants to tweak that narrative? This is connective, basic stuff. Big ag is a broken system, and it’s coming down soon. This simply isn’t meant to be a specialized or abstracted gig, I don’t think. This is every human, every meal taken in. I just think, as idealistic as this is might sound, that if we have any hope of healing our corrupt food system, we need to be thinking less like consumers- and I think that might need to mean we banish the idea of the “producer” as well… what if instead we are all in relationship? What if we are participants (or, conversely, non-participants, but you gotta reckon with what that means…)? How does that change our thinking? Who’s job is this anyway? I could probably go on for miles because of course what follows are issues of access and acknowledging the systemic barriers to fixing said relationship, but I maintain that a meaningful first step is in the shifting of our collective story. Our beliefs about how this should work are always a powerful influence on what actually materializes. As always, a simple search through Wendell Berry’s work yields exactly what I’m fumbling around in the dark for. Here it is, from one of his essays in “What are People For?”:

“Many times, after I have finished a lecture on the decline of American farming and rural life, someone in the audience has asked, “What can city people do?”

“Eat responsibly,” I have usually answered. Of course, I have tried to explain what I meant by that, but afterwards I have invariably felt that there was more to be said than I had been able to say. Now I would like to attempt a better explanation.

I begin with the proposition that eating is an agricultural act. Eating ends the annual drama of the food economy that begins with planting and birth. Most eaters, however, are no longer aware that this is true. They think of food as an agricultural product, perhaps, but they do not think of themselves as participants in agriculture. They think of themselves as “consumers.” If they think beyond that, they recognize that they are passive consumers. They buy what they want-or what they have been persuaded to want-within the limits of wifery of the old household food economy. But one can be thus liberated only by entering a trap (unless one sees ignorance and helplessness as the signs of privilege, as many people apparently do). The trap is the ideal of industrialism: a walled city surrounded by valves that let merchandise in but no consciousness out. How does one escape this trap? Only voluntarily, the same way that one went in: by restoring one’s consciousness of what is involved in eating; by reclaiming responsibility for one’s own part in the food economy. One might begin with the illuminating principle of Sir Albert Howard’s The Soil and Health, that we should understand “the whole problem of health in soil, plant, animal, and man as one great subject.” Eaters, that is, must understand that eating takes place inescapably in the world, that it is inescapably an agricultural act, and that how we eat determines, to a considerable extent, how the world is used. This is a simple way of describing a relationship that is inexpressibly complex. To eat responsibly is to understand and enact, so far as one can, this complex relationship.” 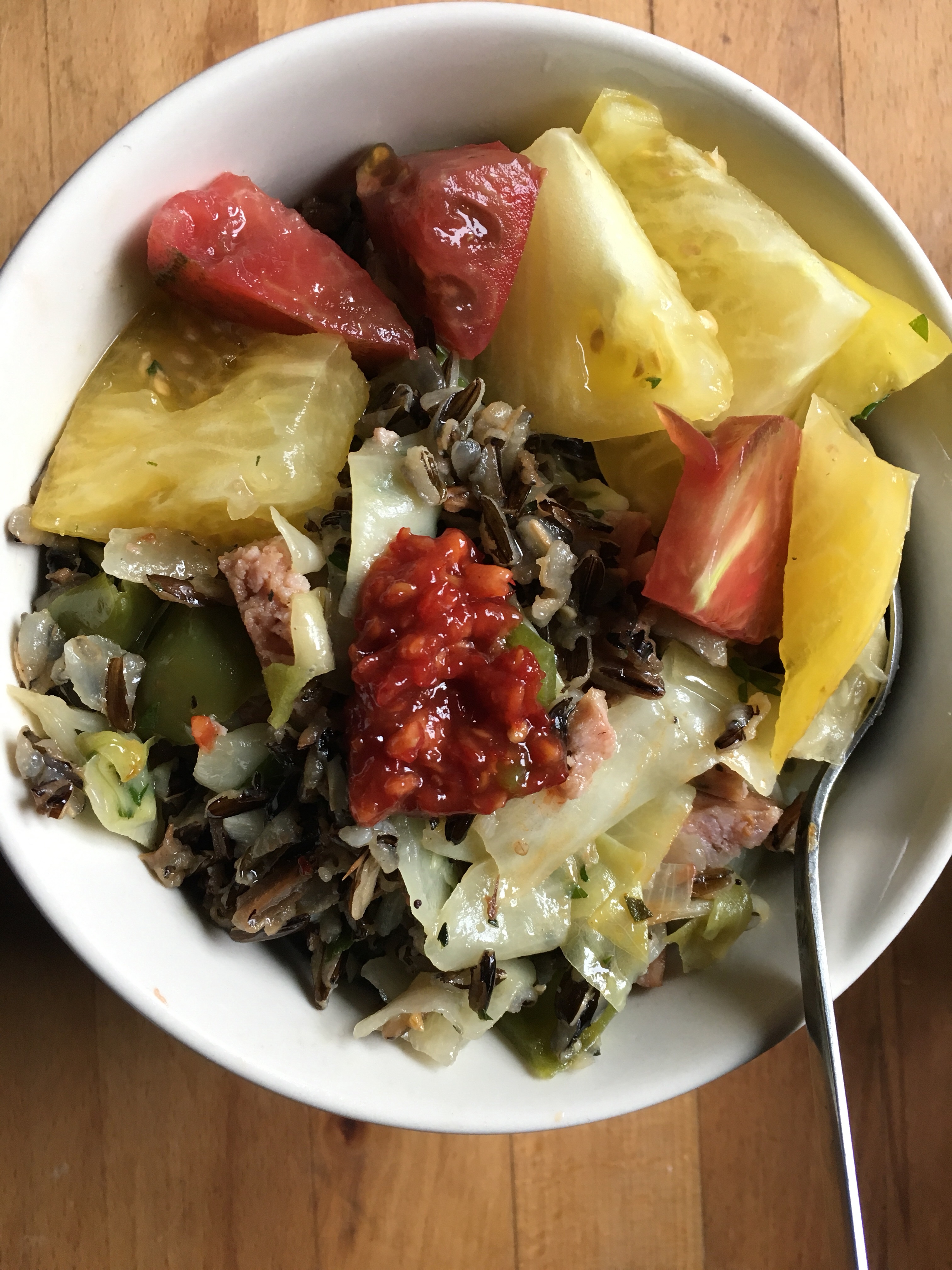 On a different note, I’m pleased to report that it’s *finally* the time of year for us to eat thick slices of multicolored heirloom tomatoes on the side of every meal. Amen.