Asa just fell asleep, Jeff and Vera are off to pick up the milk and go to get some chicken coop supplies, and here I am in the precious, precious quiet. I’ve got my cup of coffee. I’ve got a little space to write. Reset.

This morning was intense. Kids were tense- Vera is definitely a little stressed and we’re working out some 2 year old stuff with her. It’s normal and I’m not worried in the slightest, but the NOISE sometimes is just so overstimulating. When you’ve got an infant fussing and a 2 year old screaming for mama and papa to stop talking, or give her raisins, or now she wants an egg- but just from Papa, or because she wants milk milk milk and can’t deal with the fact that I told her to wait… it’s just. Phew! Then Jeff or I start to lose it, but thankfully never at the same time. I’m just really glad to have him home right now. I’m wondering how I’m going to pull some of this stuff off on my own after he goes back to work. I’ve got a couple of weeks, so I’ll try not to stress about it yet, but man… I’ve said to him "How am I going to do this?" and he’s like "Uuuh, yeah. I don’t know." At least when I do pull it off, he’ll be impressed, and I’m pretty sure he won’t give me any crap if the house is a wreck at the end of the day or if I haven’t managed to cook and need his help. If there’s one thing I can say for Jeff, it’s that he really sees what I do. I feel really blessed in that area, and I won’t take it for granted. We both know when the other needs help, and when we can’t see it, we ask for help and generally receive it.

—
Actually, this seems to be something I hear about a lot recently. I know so many women out there, with and without kids, who’s partners don’t seem to get it. Even really great, feminist guys, who I really respect, who seem to be stuck in these meaningless gender roles when it comes to caring for the home/kids. There are lots of men that I hear about who work a normal work week (which is surely tiring), but then feel as if they’ve paid their dues and that’s where the work ends. Their time off means no more work… or because they make money, their work is somehow more valuable. Or when they do do something around the house, it’s worthy of more praise than normal because it’s above and beyond what they feel is their responsibility. They don’t necessarily say this, but their actions (or more like inaction) is indicative of this value. This is so strange to me, because now that I’m a homemaker/mother/what-have-you, I don’t really get time off. It just doesn’t exist like that for me anymore. I get "breaks", I get to relax here and there, but there’s no designated time for me to check out and do whatever I want. That’s fine with me, I’ve realized that’s life- and it’s the life I want. It’s full of stuff that actually matters. It took a little adjusting to think differently about it all, but it’s a good thing. Jeff went ahead and adjusted with me, even though he’s still got a day job. Plus, when he gets home he readily admits that he likely did far less work* than I did all day, and that my role of keeping our house in order and feeding us all and nurturing our kid is a super valuable thing to him.
Anyway, we’ve chosen "traditional" roles- where I’m mostly home and he’s going to work every day. I suppose those roles were established at one time because women were best equipped to raise young children and the men were off doing things that required their manly attributes… but last I checked none of the men I know were defending the home from any attackers, and I haven’t seen Jeff spear a buffalo once. I assume those roles stuck through the years because of sexism- women had no rights/education/etc., so who else would work outside the home but the men? And the home still needed caring for anyway. And of course, women were risking a lot to demand more from the men in their lives, because how would they take care of themselves otherwise? But now this stuff is just outdated, and I feel so surprised when I hear about these men who check out when it comes to pulling their weight. I hate to hear that a friend has asked her partner to do really simple stuff and it’s like pulling teeth.
I guess I’ve been lucky in a couple of respects. My parents, for one, who did have very traditional roles. My mom stayed home with the four of us, and my parents even believe in the whole "man is the head of the household" thing, and my mom obeys him and stuff if it comes down to it. That’s not the way that Jeff and I do things, but I can’t say that I don’t respect my parent’s choice because it seems to work for them. My dad has done the laundry for as long as I can remember, and he almost always hand washes all the dishes after dinner (even though they have a dishwasher… he’s quirky). He also vacuums a fair amount. I dunno. I’m sure there are ways in which my mom probably wanted more help from him and didn’t get it, but ultimately I think he was a good "head of household" in that he sincerely looked for ways to contribute and I think made an effort to help out with some of this stuff. And then on Jeff’s end, he had a mother who was the primary "bread winner", and I think he grew up knowing how hard his mom worked (working all day long and then coming home and making dinner, cleaning, taking care of all the kids… she’s incredible and I don’t know how she did it). Jeff really takes initiative around here, and doesn’t give me any crap when I ask him to do something either. And vice versa. We just try to work together.
Anyway, I was thinking about this because I had a friend come over recently who is in a pretty traditional relationship. I don’t know this for sure, but I’d guess that it’s a "man is head of household" kind of arrangement. I’m almost positive it is, actually. Anyway, no judgment from my end, but she came in to find Jeff scrubbing the toilet. She said "Oh my gosh, what a good guy!!! Scrubbing the toilet!" and turned to me with an impressed look on her face. I said "I know! He’s a keeper." or something like that. But there’s a part of me that, while I love singing Jeff’s praises, is disappointed that it’s seemingly such a rarity. Many of my women friends take note of things that Jeff does around here, like he’s doing something extraordinary and I’m all super lucky. I think it’s great, and he’s deserving of the notice. But it should also be normal, I think, to be loved by your partner through service.

*For those who don’t know, Jeff works as a cashier/change relief guy for the downtown parking system. Basically, he’s one of the guys in the booths, and when he’s not in a booth he’s running change to other cashiers.

Anyway, I say all this knowing that people do what works for them, and that each relationship is different. I don’t mean to generalize, either, I just don’t like hearing so often that my friends aren’t feeling the support they so deserve. I’m also just excited to raise a couple of little people who get to see mama working outside and papa scrubbing a toilet here and there. I feel really happy to have the family that I do, and while we’re not perfect, we’re gonna keep working at it together. 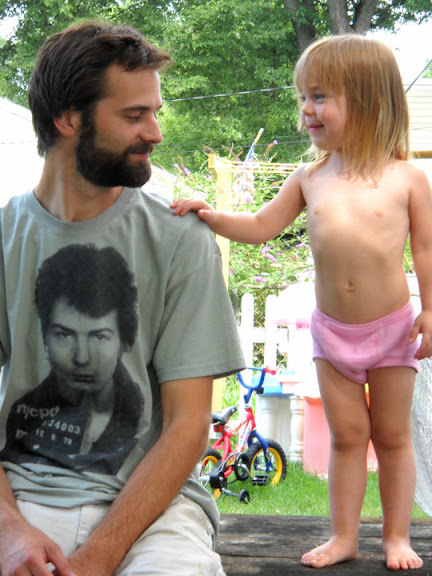 (photo credit to the lovely