My mom poked me yesterday about not posting much on here anymore. She said the gaps between entries are getting farther and farther apart, and I know she's right. I hate the idea of this place fading away for me, so I'm determined to get back into the habit. I am tempted to say that I don't have time to write like I used to, but I don't think that's entirely true. I know that while I may not have time to write as often as I'd like, I do have enough time to do more than I have been. I will continue to try.

Anyway, there is so much to share. I don't really want to dive into all the complicated stuff today- except to say that things have, in fact, been a bit complicated. Things are still so good in so many ways, but I'm finding that we all are anxious for a little extra order in our lives. There is so much that we can't control… in farming, in parenting, in life in general. So when all those out-of-our-control things are feeling a little more apparent, it feels good to harness what order we can in the little things. I think that this desire for order is present in all of us lately, but it manifests in different ways. Complimentary ways, I think. I'm ever grateful for this mini-commune we live in, I can't imagine things another way at this point.

Our awning in the backyard had become chaotic. We were using it for all sorts of chores, as a space to organize things, to sow and harvest microgreens, etc. It had ceased being a restful place (albeit useful), and we never ate outside anymore because we didn't want to deal with the mess. Tragic! 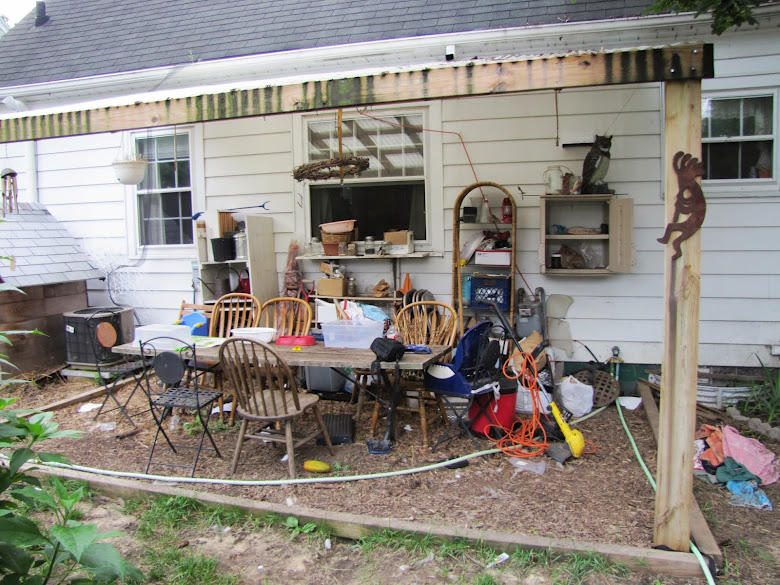 I decided to reclaim it the other day. We still needed the work space, but I was determined to figure something out. The best solution was to pop a tent in the middle of the yard that would become our designated microgreen work space. It's worked out really well- it is a sheltered area where we can sow and harvest, with a shelving unit for germinating trays and supplies. Also, it's right in front of our micro compost area, so we don't have to lug heavy trays of soil across the yard. This move was immensely clarifying for us. 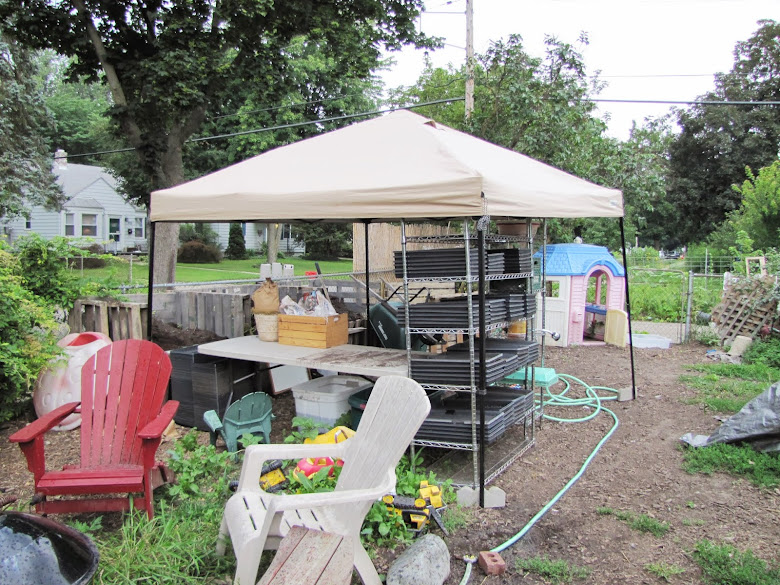 It also inspired another move. We realized that the spot we'd been shelving the micros could be better. I thought that we could put them on the northern edge of the driveway. That way they'd all get consistent southern exposure (which means more direct sunshine and less inconsistency), and they'd be closer to our little work station. Pictured here the micros are pretty full to the brim, but this is just before a harvest. This spot really works, and we can usually park a smaller car in the driveway too. 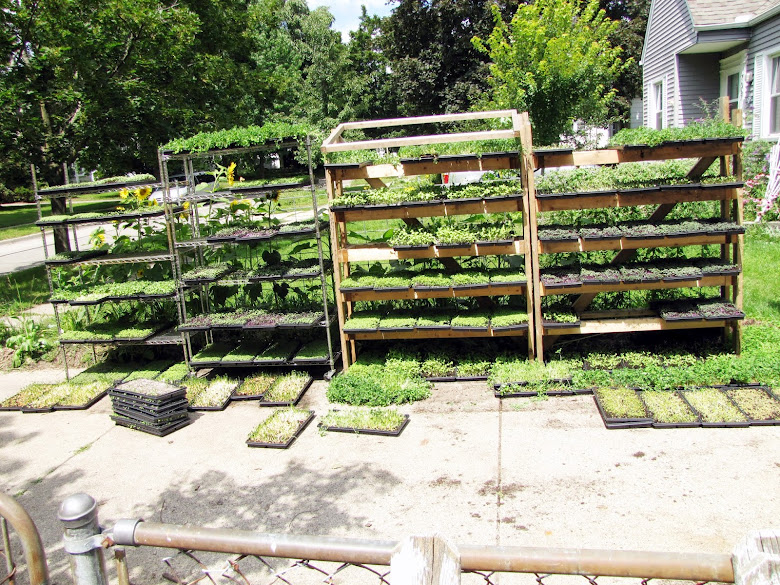 So here's the "after", when all that shuffling was done. Space! It's still useful for storage of a lot of our supplies- containers and seeds and whatnot. But it's reclaimed enough for me to look at it as a space for people and rest, not work. Jeff got the idea to put up this swing, too, which has been hours of fun for the kiddos. We just used it this afternoon to keep Jude out of trouble while we finished up with our micro harvest for tomorrow's market. 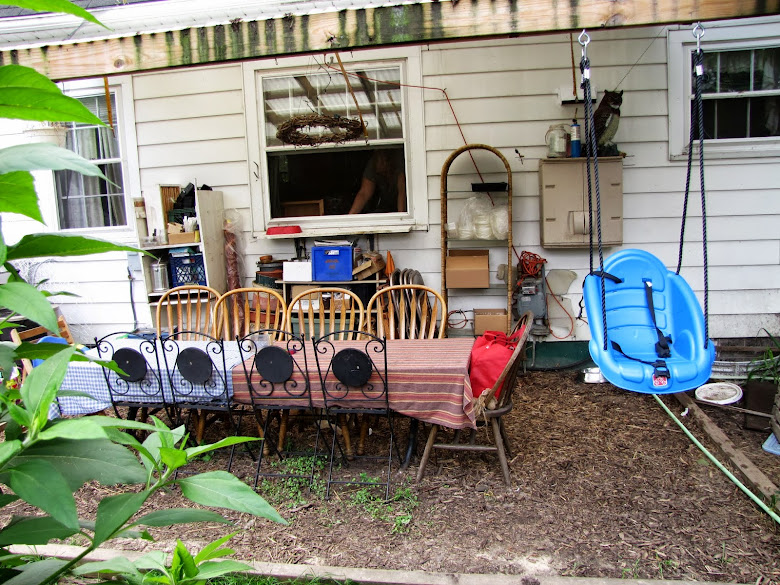 I also cleared out our side patio (no before pic), which was full of toys and coolers and junk from going to and from the farm and markets. It needed refreshing. 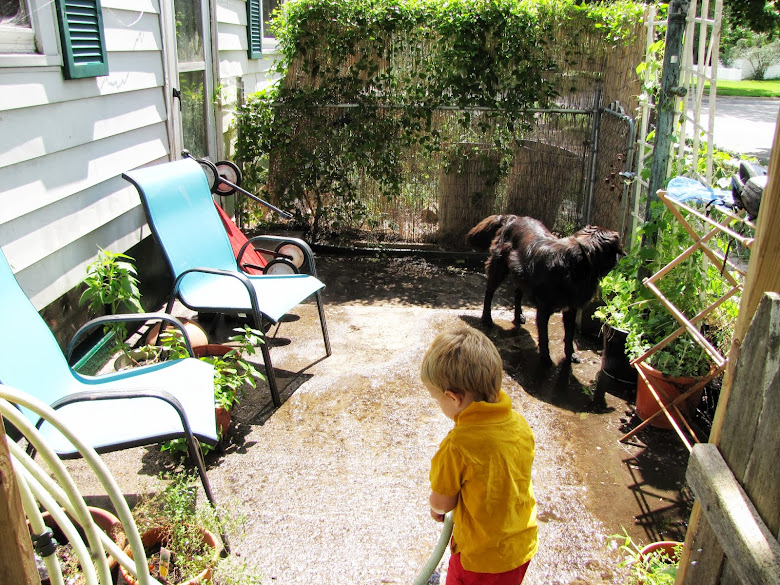 I miss having a front porch, like we did back when Vera was born. I used to treat that space like an extension of the house. We just lived out there. We have a little front porch now, but just isn't the same. Still, I sit out there all the time lately- I'm sitting in this little spot right now, actually. It's always shady and comfortable. It's so nice, even with the whoosh of traffic on this busy road. I know our time here is limited, so I'm enjoying city life while I can. 🙂 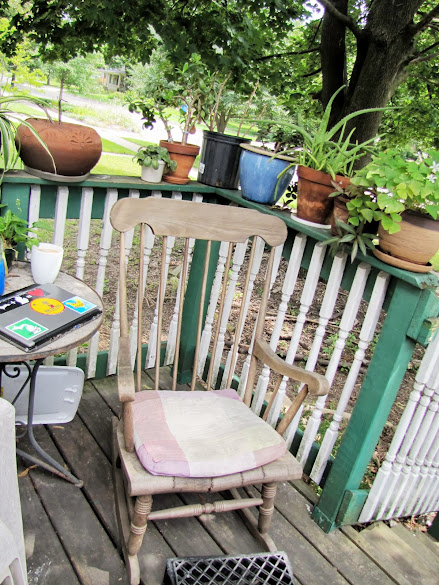 I'm happy with how clean we've been able to keep the house, considering that 10 people and 2 dogs live in this space. We all pitch in and, despite how chaotic things can be (the old "shoveling in a snowstorm" saying comes to mind multiple times a day), I still look up at sites like this and think- Wow. We aren't even living in a pit! 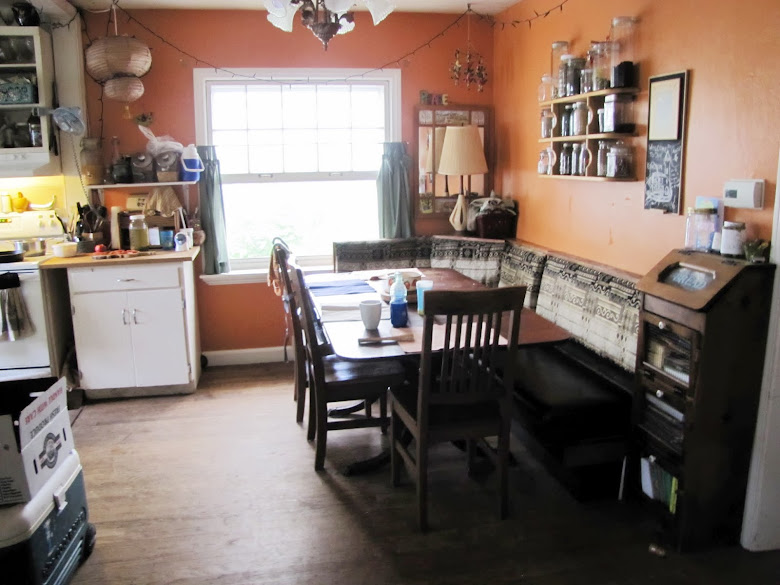 This awe over not-living-in-a-messy-pit thing may seem odd to some, but it just makes me happy. It's one of those small things that just sticks out to me right now. Goes to show how gratitude and perspective have such potential in our lives. Until my current situation, I wouldn't have been so grateful to look around and just see a semi-clean space. Win! 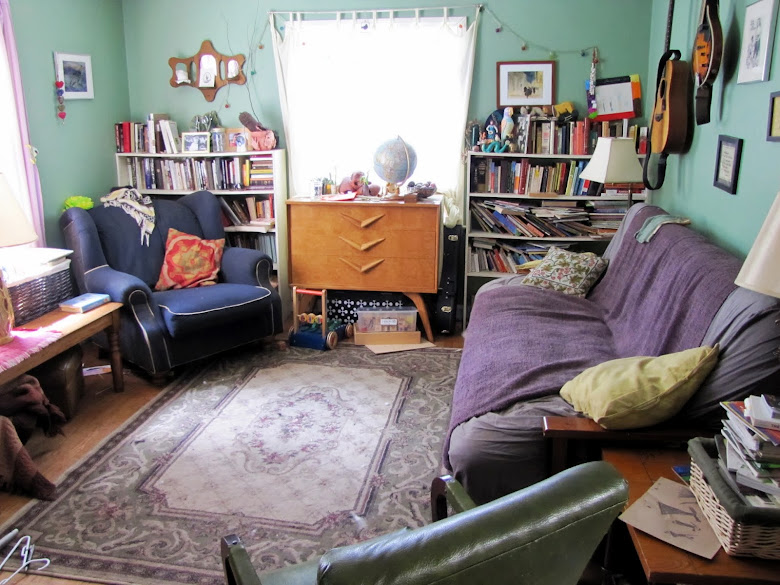 I haven't shared a garden picture in quite a while, so I thought I'd post a couple. Things are wild and productive. 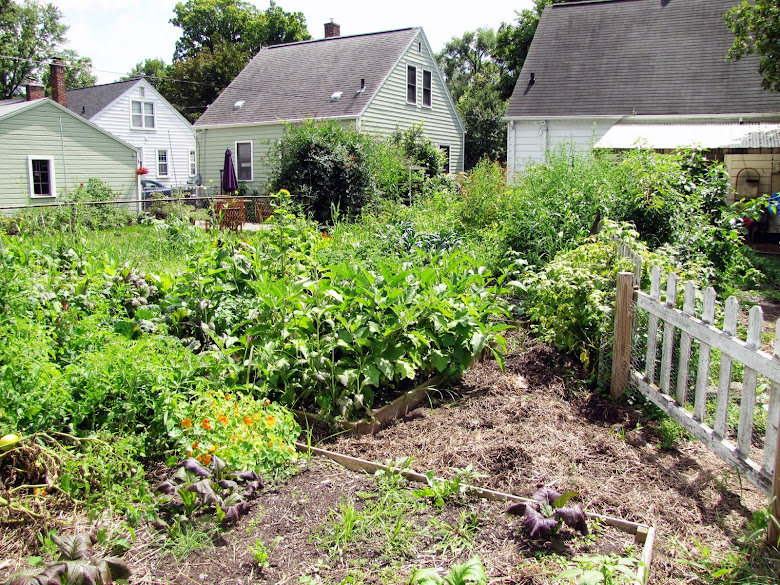 This is the first full summer with our little greenhouse employed. It's full of beautiful eggplant. Jeff and I find it so peaceful in the greenhouse that we've talked about setting up a lamp and a game out there one of these days. 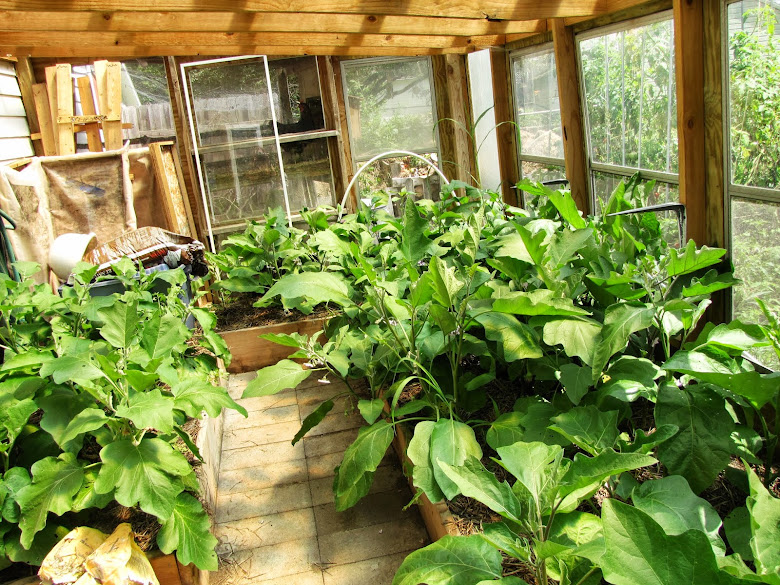 One of my projects in the yard is growing this parsnip seed. It was an experiment. I was late planting parsnips and decided to try it anyway later in the summer. This spring I found that the life cycle of the plants just sped up, and that winter had triggered it to go to seed. They are ready to harvest now, so we'll have plenty for next spring. 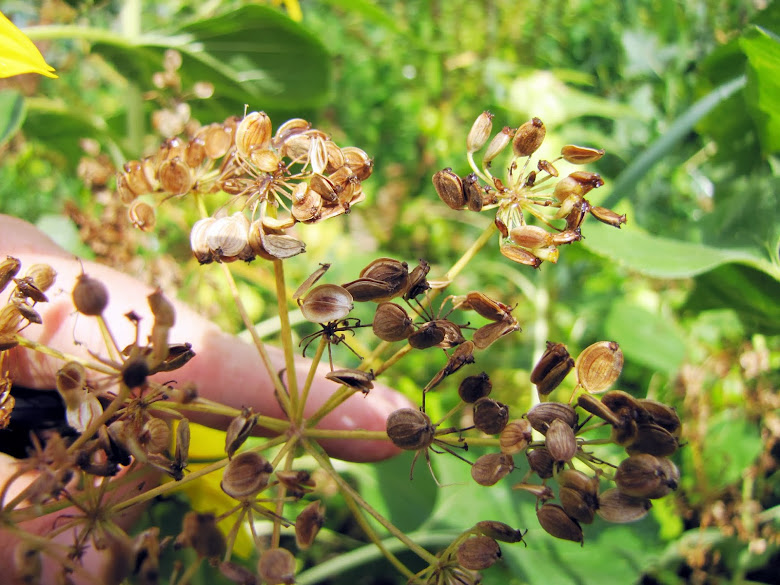 Here is our amazing patch of Jerusalem Artichokes, which I thought I had thoroughly harvested last year. They are well known for coming back year after year from only a little piece of the year's previous tubers. I don't mind, though. I'd always rather have a productive mess out there than not. 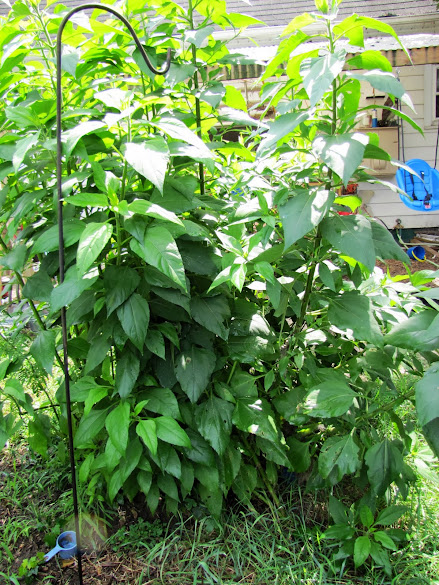 Garlic harvest. It wasn't as booming as we would have hoped, but it's been a weird year weather-wise. The plan is just to eat and sell what we've got, then buy plenty for seed from our local garlic farmer. 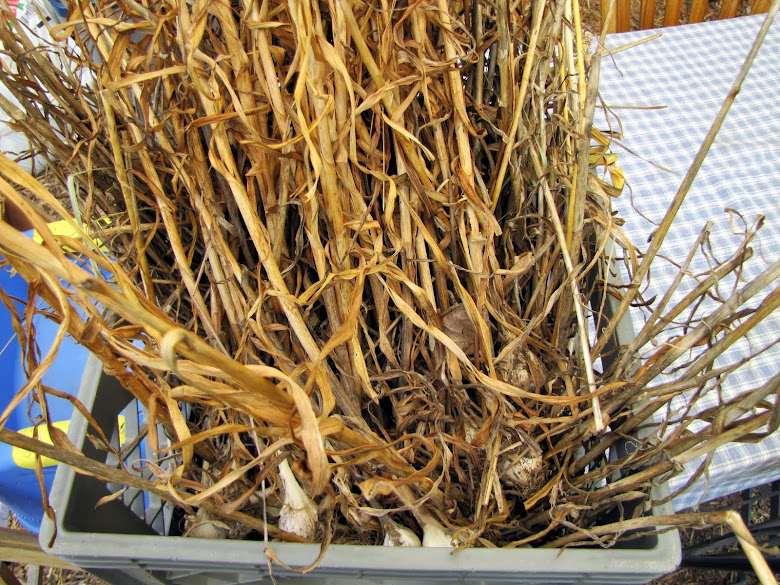 This is our blackberry bush, which has been really beautiful and heavy with fruit. Our berry plants have really settled in this year. It makes me a little sad to leave this place, although I know I can take most of them with me when I go. And I can't feel too bad, because I know on the land it will be 20 times what we have here. It's just nice to see the (literal) fruit of our labor. 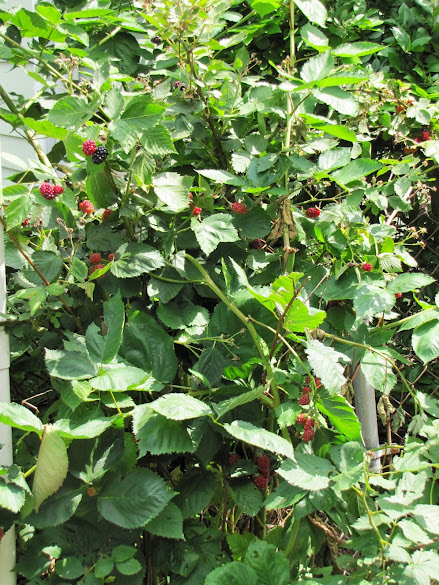 My plan is to write again this weekend, to work up this habit. Do any of you have ideas for what I should update about? Any suggestions are welcome.  🙂