Perhaps in order to successfully execute a "Wednesday Food Post" every week, I’ll just have to pretend that I’m supposed to post it by Tuesday… yes, that’ll work!

—
I was thinking about matters of taste. Let’s take little Max, for example…

I had just chopped an onion so strong that I was weeping over the kitchen sink, squinting and waiting for the stinging to pass. Max was grunting and pointing at the other half of the onion sitting on the cutting board. I thought it was funny, and he was insistent, so I let him hold it. Next thing I knew… Crunch! 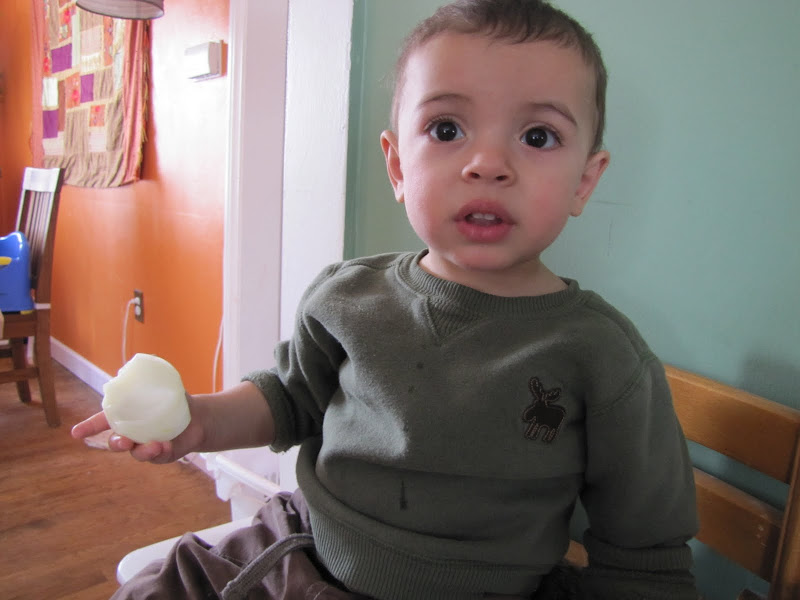 And he kept going (hence the pictures)! He munched on that onion for a few minutes. Big bites, too. He seemed mighty pleased with himself until about the fourth bite, and then he offered me the onion back. 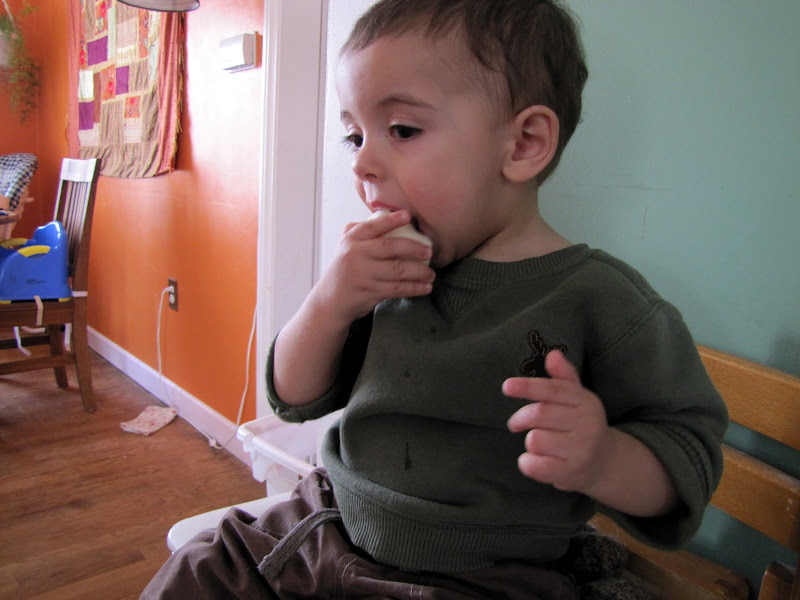 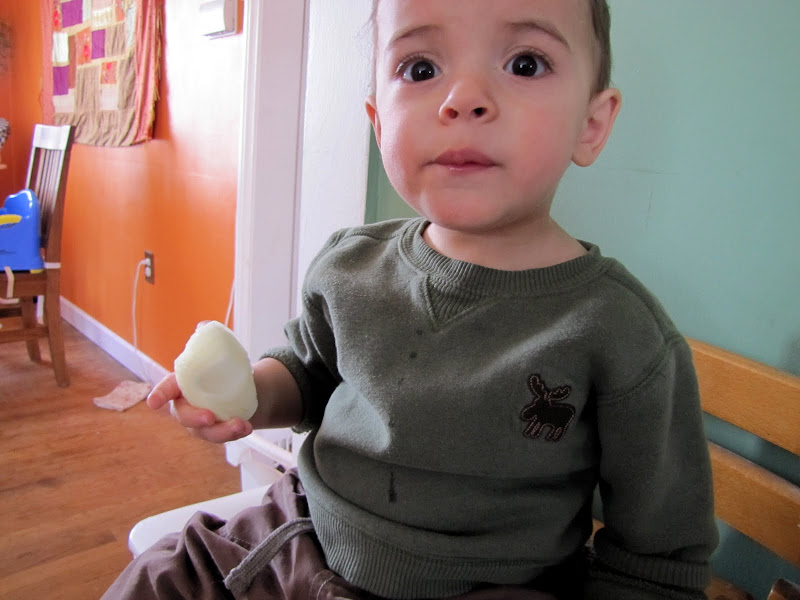 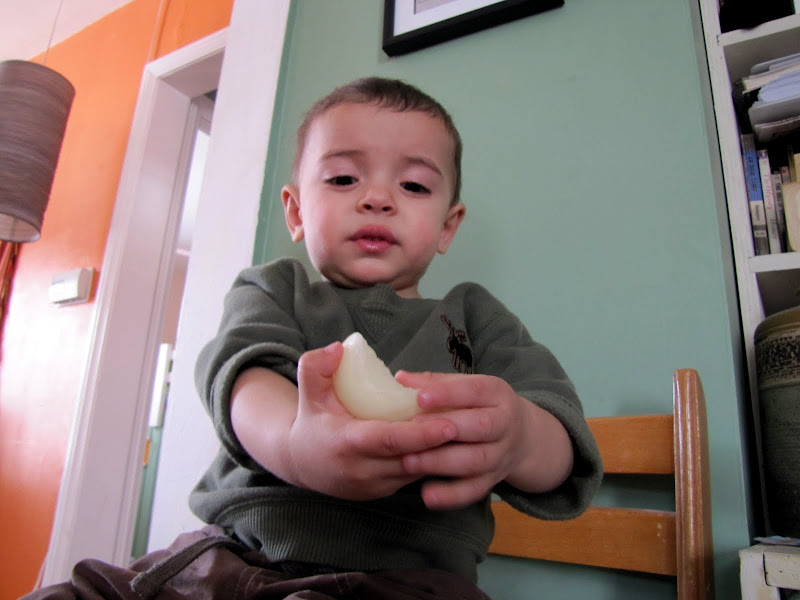 Haha! You gotta love this kid! 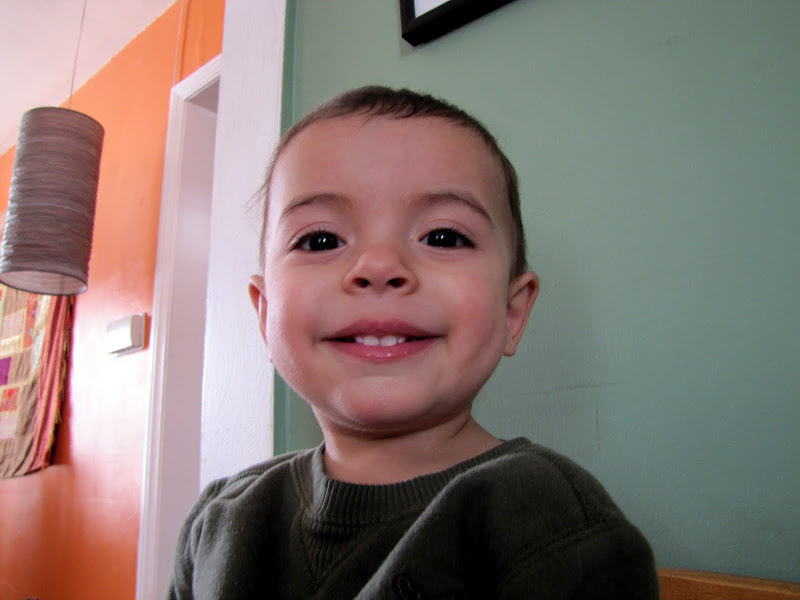 Anyway, all I could think as he ate that onion like a sweet apple was, "Well, there’s no accounting for taste…"

I’ve often heard it said that healthy food is either mediocre or tastes bad, and unhealthy food tastes good. Well, I won’t say that is entirely untrue- there are some foods that are surely good for us that taste like cardboard, and there are certainly foods that are horribly bad for us that leave us rolling our eyes in pleasure. That being said, I have a theory about taste. I think, if we are careful, our tastes will lead us to good health. Yep. I really do.

But we have to focus on the careful part. I actually feel like the best way to describe what I mean by this is to build on a concept from one of my favorite authors, Derrick Jensen. He talks about the concept of "toxic mimicry". The idea is that things that were once fulfilling and healthy in our lives have been dissolved by this way of life. The void that is left is filled by something reminiscent of what was healthy, but now takes a toxic form. I think this has happened with food.
Let’s take, for instance, sugar. Humans love sweet things. That’s natural. If you’ve ever tasted breast milk when you were old enough to remember it, it’s really sweet (hey, if you live in a house where you’ve been producing the stuff for 3+ years, you’re bound to get curioius…). It’s sweeter than other dairy I’ve tried. Sweet things are good for us, but nature doesn’t really give us sweet things in the way that they seem to come these days. Traditional sweeteners were different. Honey, maple syrup/sugar, date sugar, even unrefined cane sugar (rapadura)- all sweeteners, but they were also full of minerals and nutrients and were used sparingly. Now, however, it’s completely acceptable to have a can of soda that contains something like 10 teaspoons of sugar. This is craziness. Also, these new refined sweeteners have none of the nutritive values that the traditional ones contain. Anyway, I’m probably preaching to the choir here, but my point is this- I don’t think it’s a simple case of moderation. I always here "Oh, everything in moderation… it’s all about balance." Well, I’m starting to think that one doesn’t really need to moderate, one needs to abstain from the toxic versions and start indulging in the nourishing ones.
I watch this all the time with my daughter. Let’s say she’s given a few treats in a matter of days that contain lots of refined sweetener. Over the next few days she’s begging me for treats and syrup and chocolate… Then, it passes. She’s back to asking for cheese, fruit, and more nourishing snacks. It got me thinking about addiction, and how it’s indicative of the toxic versions of things…
Anyway, I’m rambling, and I have to leave for class soon, so I’ll just leave it at that and revisit it another time. Any thoughts?
—
Also, just wanted to share these pictures of our maple syrup progress. We’ve got 12 gallons of sap stored in our freezer, and today we gathered another 5 gallons. 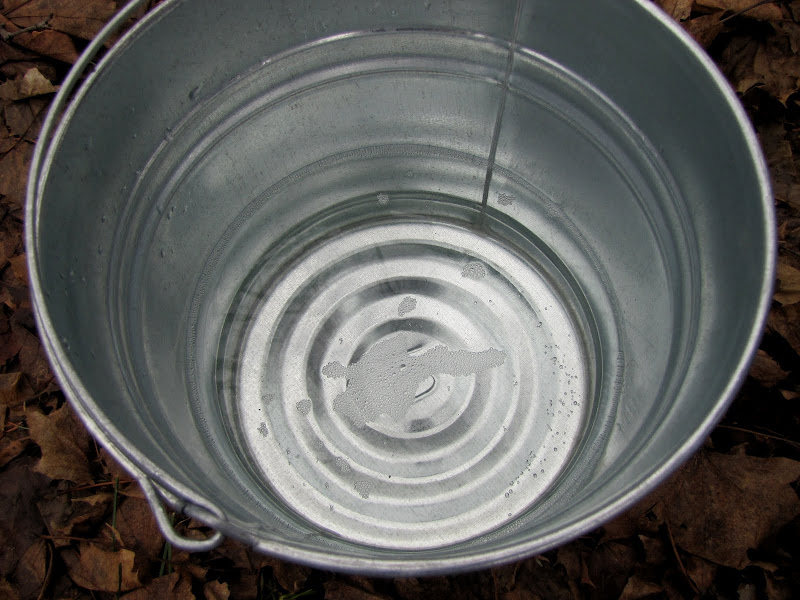 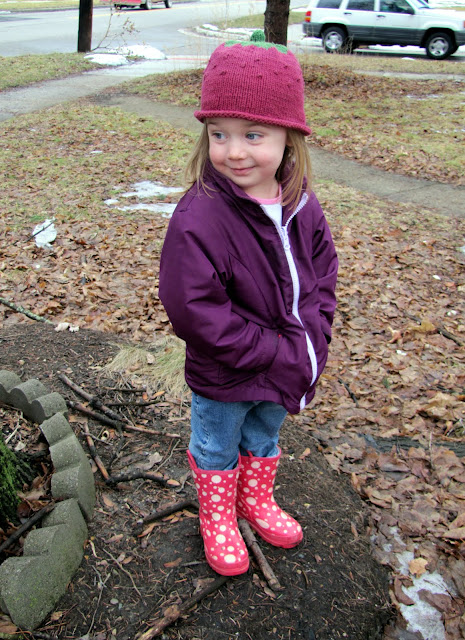 We did an initial strain of the sap before we started to boil it. 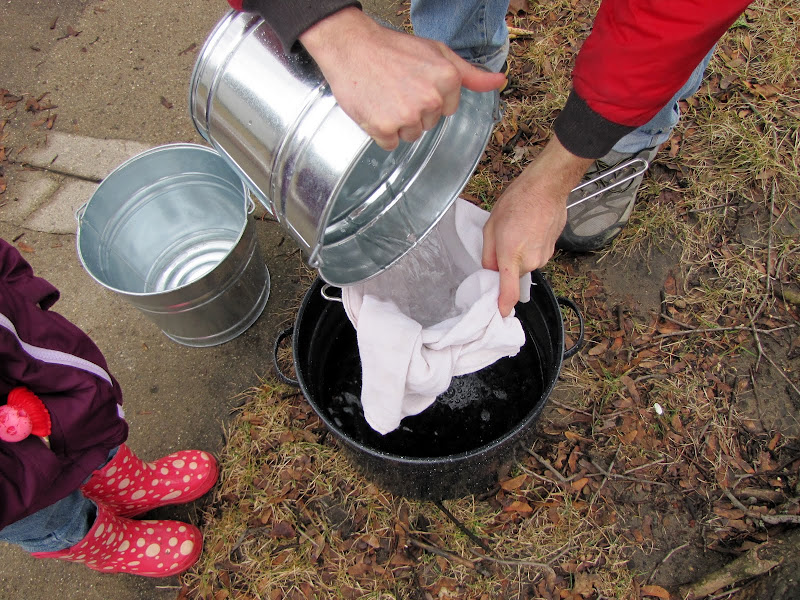 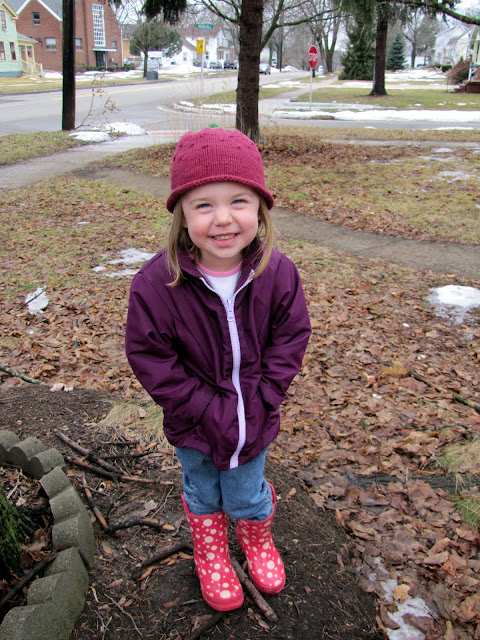 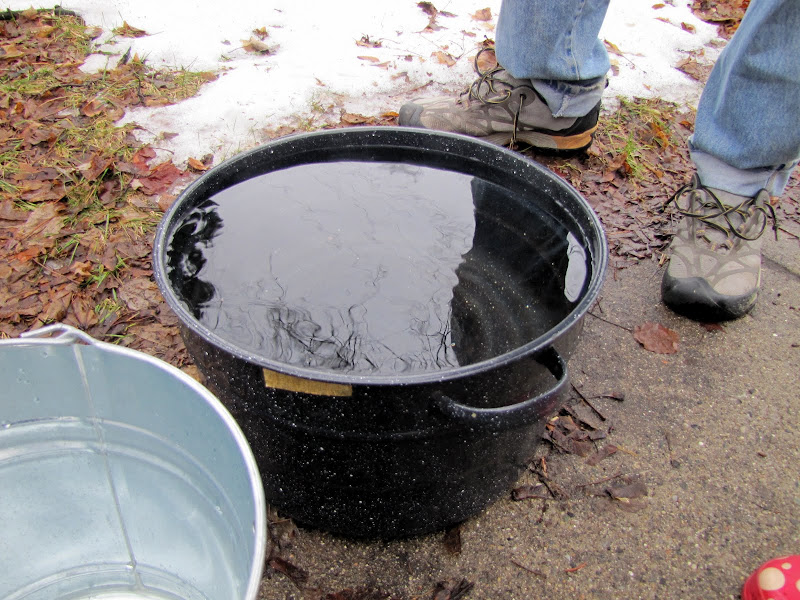 This is what Vera did when she realized we’d get syrup from the trees. 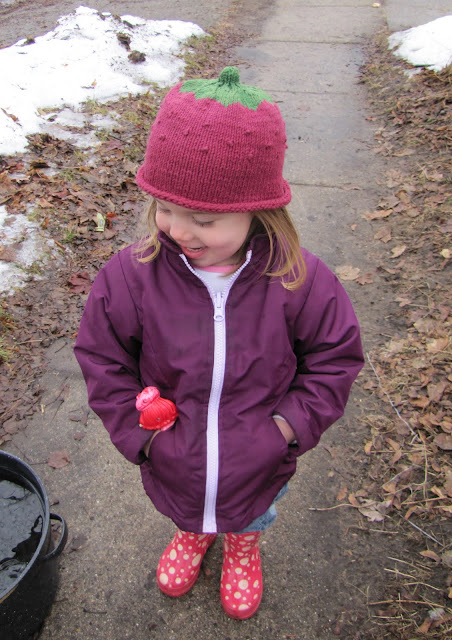 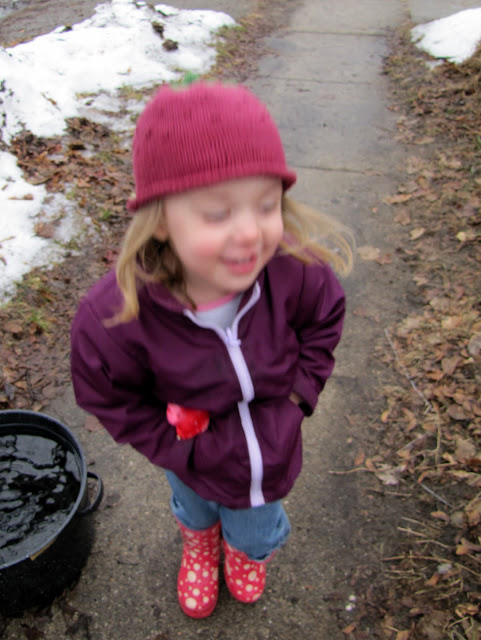 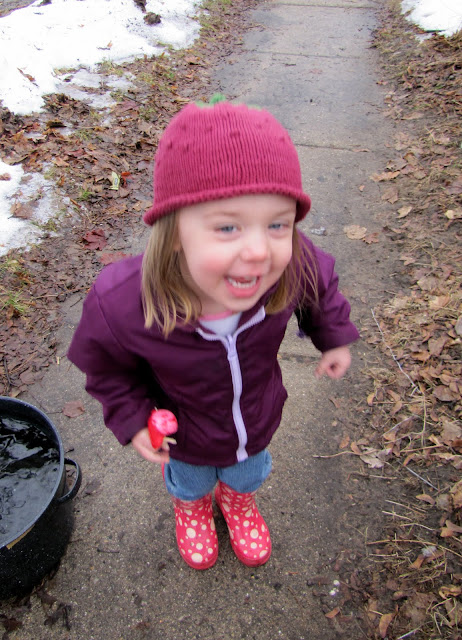