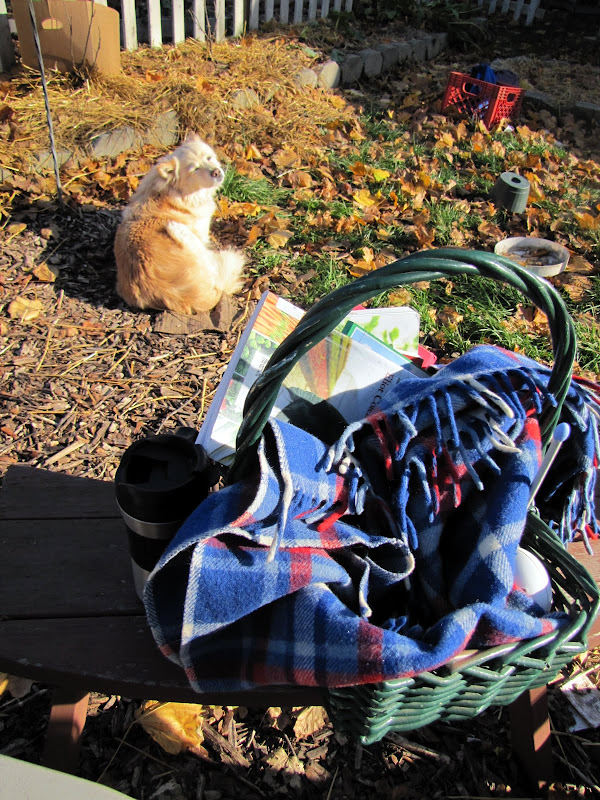 I'm grateful that on each of these unusually warm and sunny fall days I made a point to get out into it and soak it up a little. Even if it was just for half an hour. This day was so nice and warm, we packed up some books and tea and blankets and just set up camp in the back yard. We raked up leaves and jumped in them. I mention this now because today it's all frozen over and bitter cold. I think we're back to the early morning trek out to the chicken coop to give them fresh warm water because the bowl is frozen solid. I don't mind that job, it's probably the only reason to go out there to see them on the coldest days.

Speaking of chickens, we lost an Odette. We don't know what happened. I scoured the internet for answers, and came up pretty empty. Apparently sometimes they just die. I guess I feel like there has been too much chicken death lately, but when I really break it down the only other questionable death was Mrs. Peacock, and she'd been around a while and had possibly been compromised due to that foot infection. And the peep's death was tragic, getting pecked to death and all, but we won't make that mistake again. Anyway, we've been watching the others and so far they look fine. Hopefully that will be the last chicken death for a while and we can just enjoy them and the eggs for the next couple of years.

Vera is loving having her "peeps". She's caring for them well, and I think it's a good responsibility for her to have. 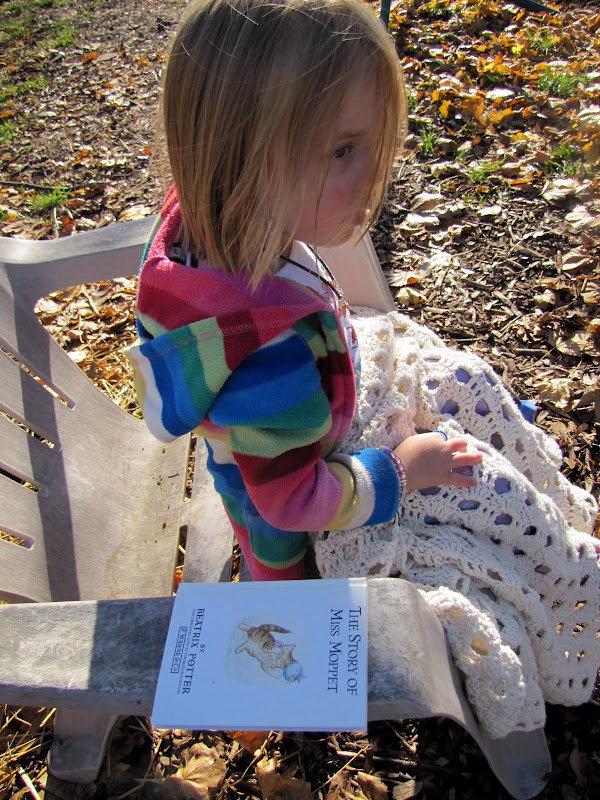 Maya is getting all of her fluff back and spending more time inside lately. She's so snuggly and awesome. I love this dog. 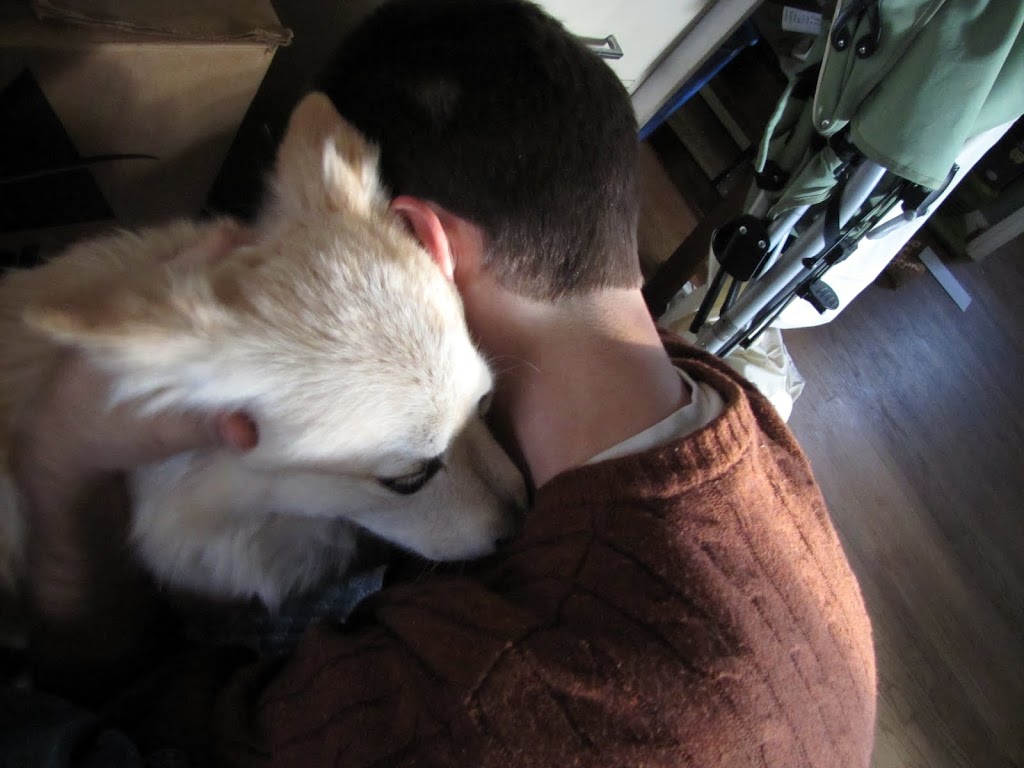 I've been really focused on using a portion of time each day (even if it's just 10 minutes) to organize and prepare for winter. I feel like a lot is getting done, too. 10 minutes can make a big difference! I regret that I didn't get a "before" picture. This is a shelving unit that Jeff built about 2 years ago. He stopped at this point and moved on to other projects, but it's been waiting for doors on the lower portion and a little more paint, etc. But we've been staring at boxes and miscellaneous crap for ages. So I just decided to cut up an old sheet from my fabric stash and create a curtain to cover it all. It's an improvement. I also seriously organized all the stuff on the shelves, and that feels good. It's still a busy space, but at least it all has some purpose and is really being utilized. 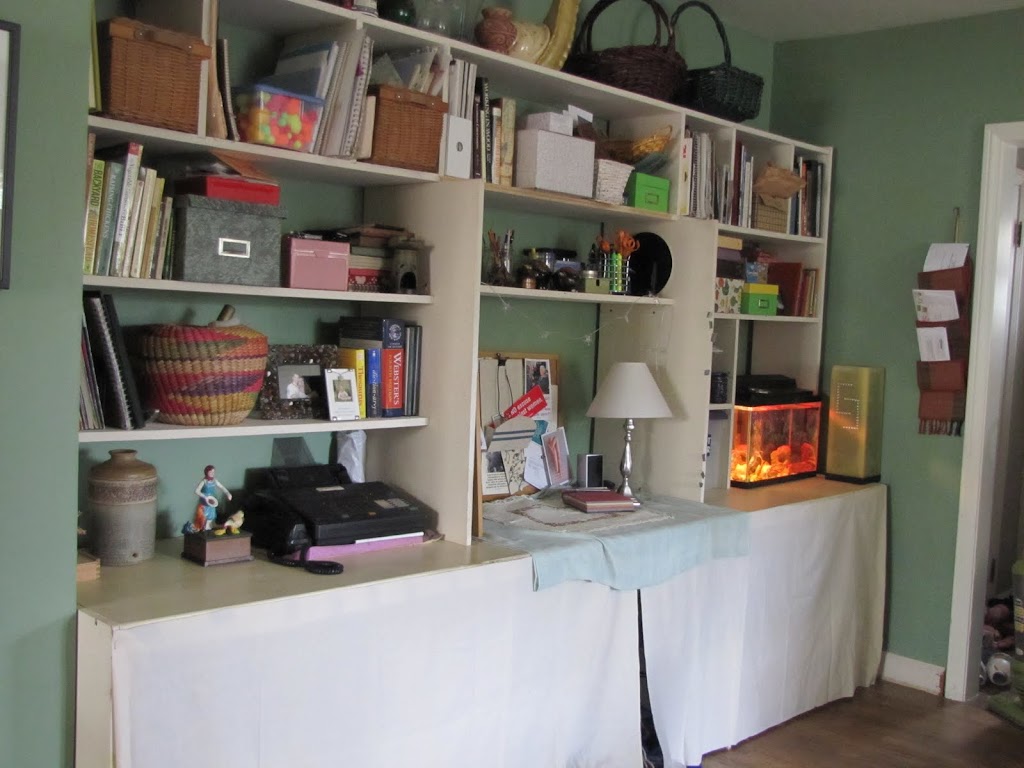 I also rearranged the living room again. Yep. I've made my peace with it. I get bored, and we have different needs for the room as time goes by, and it's a really great way to kick up the dust and find lost toys. So this is where we are now. This move was inspired by the need for more space for plants, and also a picture that  posted a couple of weeks back. I have to say, this arrangement is both more plant friendly, and the couch catches so much more sun- it just invites us all to snuggle up in the room and read. 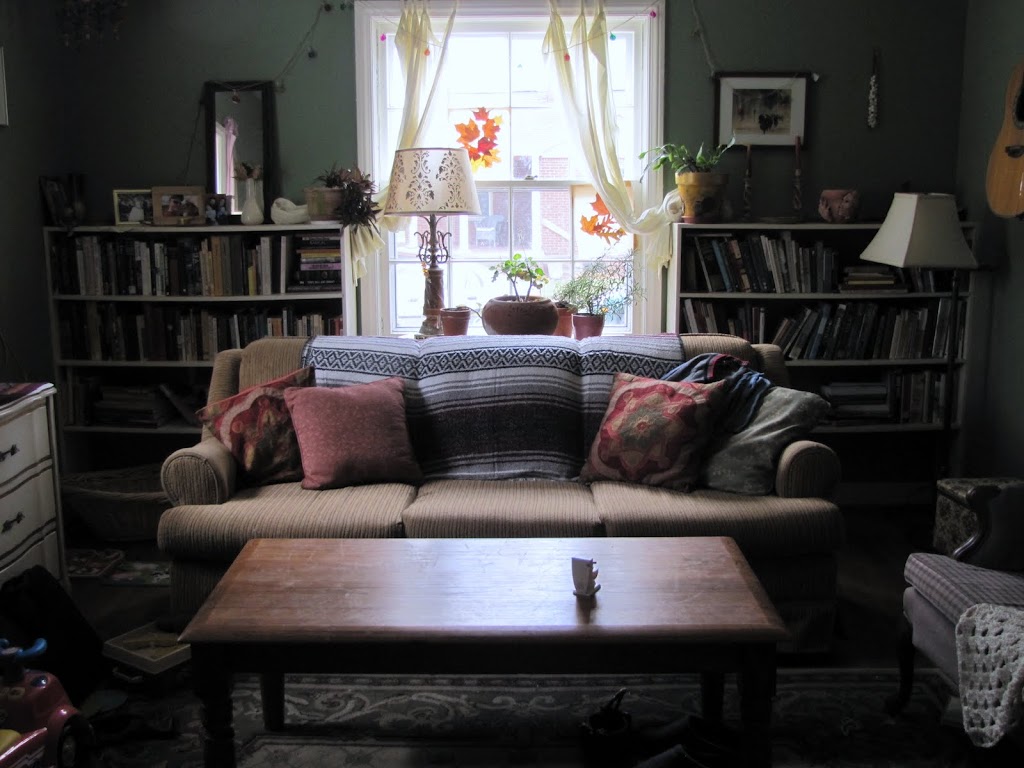 I potted up my rosemary and brought it indoors. I'm also going to be hunting down a fluorescent lamp to put on this table for other plants that I want to grow. Microgreens have been on my mind… 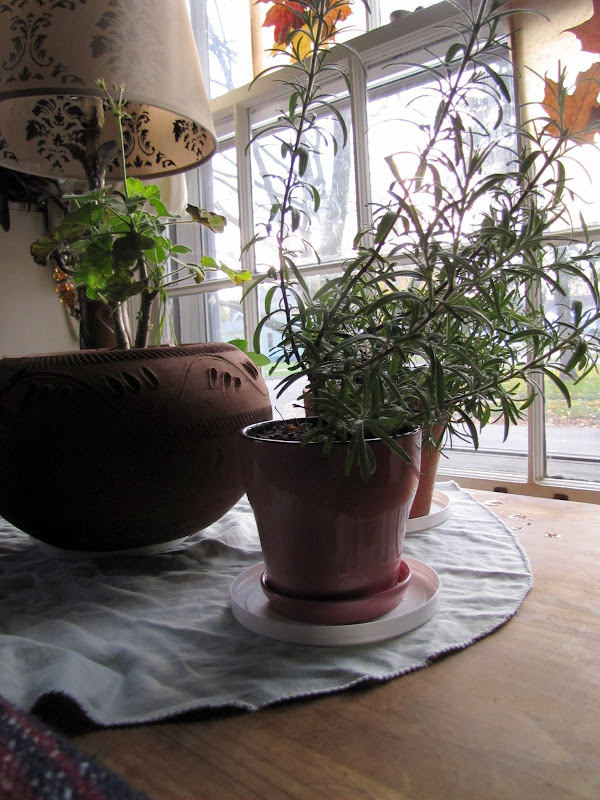 Greenhouse progress! I've been trying to be conscious of freeing up time for Jeff so that he can focus his energies on these projects. It's almost done! Although I'm thinking we'll hold off on painting until the spring. The next thing we have to bust out is the new chicken coop (because they only use the original one to lay, and then they roost out in their run, so basically the plan is to build the coop around them). It's getting so cold, though, that I think I'm going to have to get a sitter to help with kids while we both work on this for the next several of Jeff's days off. 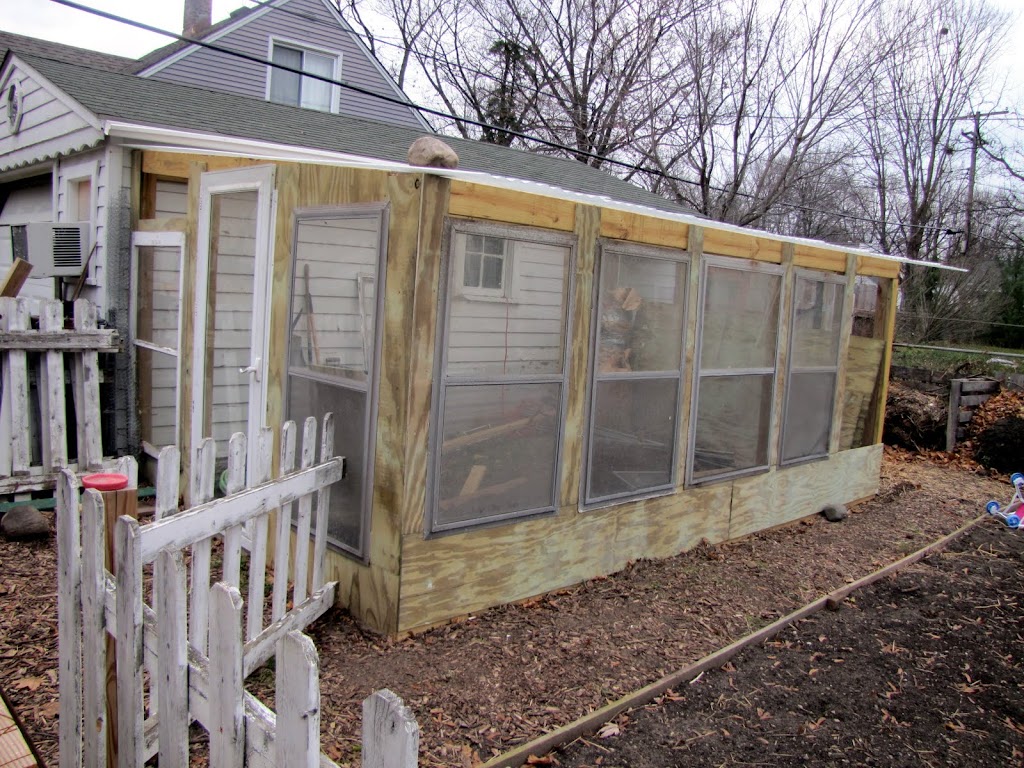 We've decided to dig the walkway down a bit and raise the greenhouse beds up. It really has no bearing on the growing area so long as we have a designated walkway, but it will be easier on our backs (specifically Jeff's- he's so tall!) this way. So the beds will rise up to meet the windows there, and go around in a U-shape with a main walkway down the center. 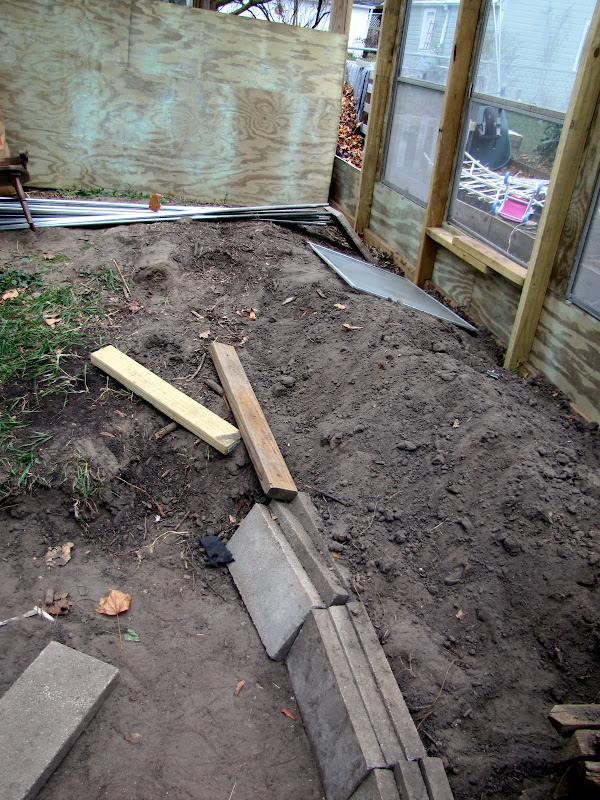 This area to the left of the door will be shelving and tool storage/work space/desk with a composting reservoir below. I'm so excited. Jeff is too, but mostly because it means all the garden stuff will come out of the garage (aka "the shop") and Jeff can have that entire space for woodworking/house projects. 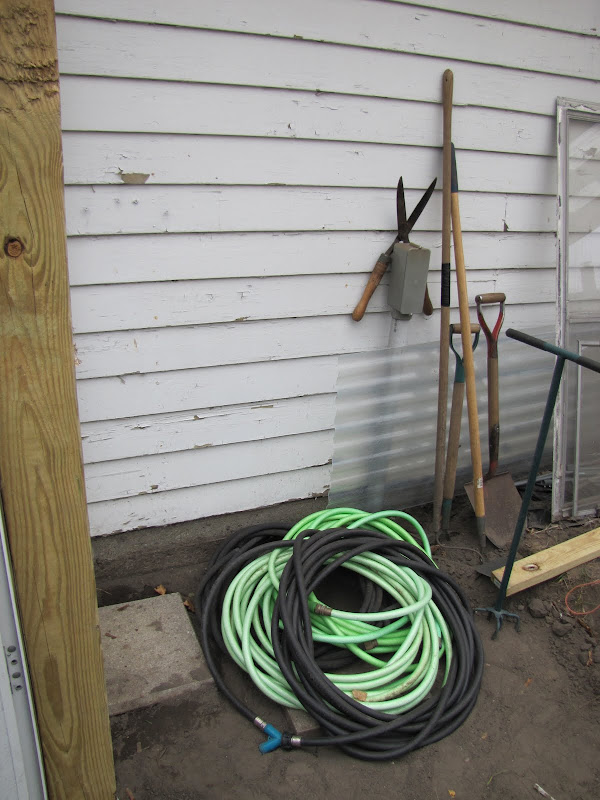 Food around here is warm and nice. Last night we had sausages slow cooked with beans and peppers and sauerkraut, with cheesy polenta and some roasted cabbage wedges. Yum. I'm hoping that winter will allow me a little more time and I can revisit my weekly food posts. 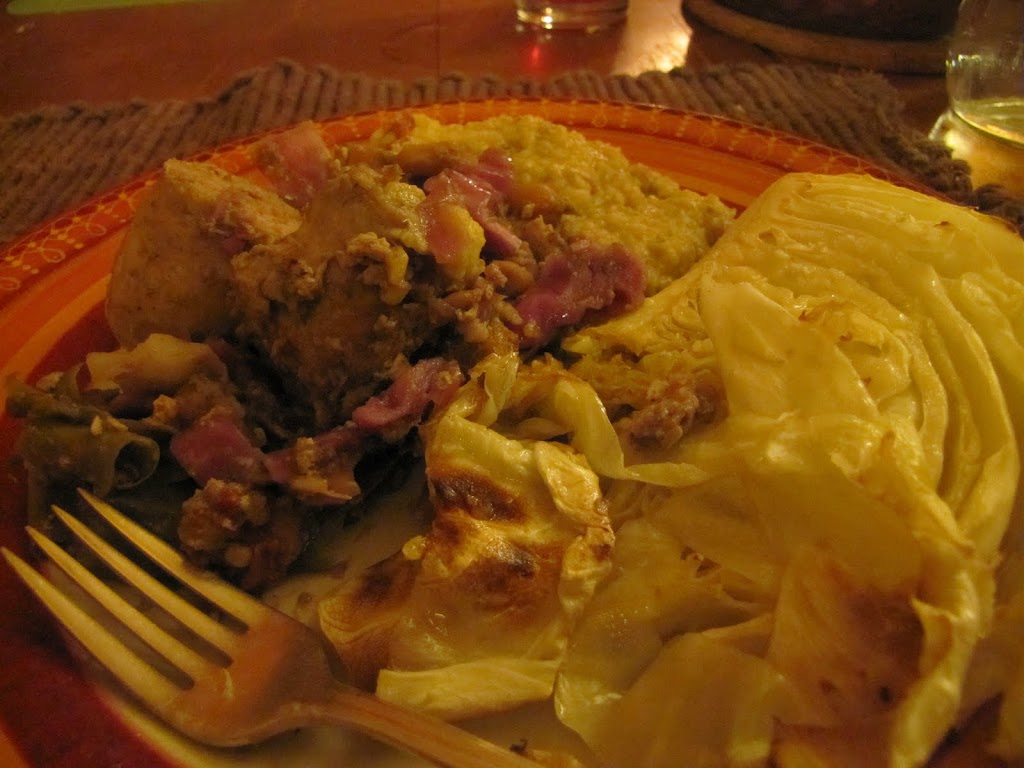 How are you all settling into this season?