Spring is here, and with it comes a flurry of activity and changes, both in terms of farm life but also within our personal lives. Our housemates of 5 years, Lindsay and her son Eli, are moving out at the end of next month. We will still see them all the time, but it’ll be strange not to live with them! This is a good relatively peaceful shift for everyone, but it’s still a shift. It was strange to know we needed to make such a change when I viewed our cohousing situation as such a success overall. However, I will say that I’d like to be a person who can make tough calls without a lot of strain or stress preceding- to be able to have enough insight about how the wind is going to change so that I can adjust my sails accordingly. To run with that metaphor, Jeff and I and the kids have all weathered the storms from the last few years fairly well, and while we knew we would need a bit of recovery time, we didn’t fully know what we’d need in the first few years on our new homestead. For now, we realized that it’s time to inhabit this space as just a family of 4 (plus the zoo we are raising, which I’ll talk about next…).

I would love to do a longer post on cohousing and some of my reflections over the past 12(!) continuous years of doing it, but for today I’ve got to get down to business. Chickens. Baby ones. In my basement. Again. I have a feeling this won’t be the last time, either.

They arrived last Thursday and I had created this temporary set up in our unfinished bathroom in the basement. “That should last a couple of weeks!” I thought to myself. Ha. 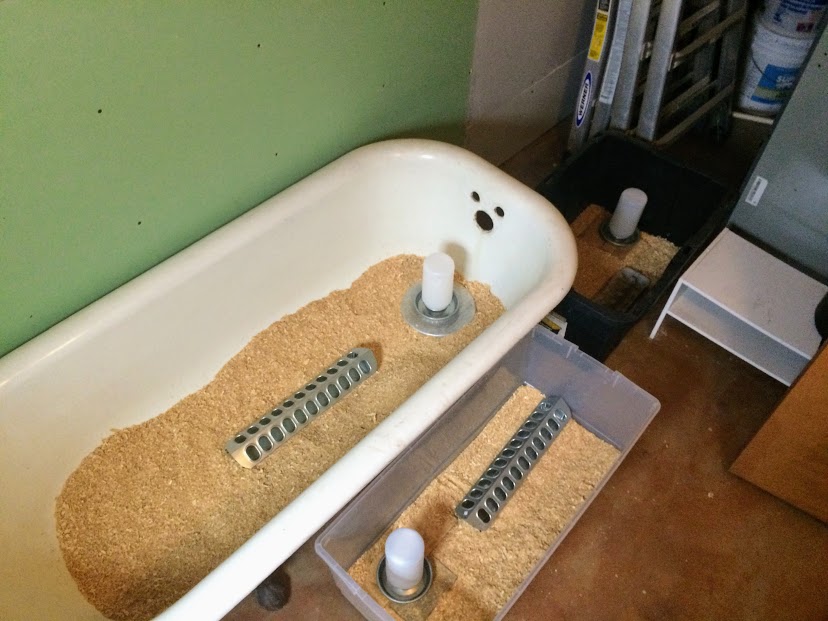 I expected 30 Red Rangers, 25 “Brown Egg Layers”, and 5 Ameracaunas (aka “Easter Eggers”). Oh, and the hatchery I ordered from offered to throw in a mystery chick, which I opted for because I think that’s awesome. 5 of the layers went to some friends of ours, but the rest we expect to round out our flock! It’s a lot of chickens, but taking care of 10 chickens versus 30 is not that different in my mind, once you’ve got the set up. Plus, Jeff and I did some visioning for our homestead and what our goals should be, and it came down to some pretty simple ones, which I’m not sure if I’ve ever shared here! Either way, it’s worth repeating. So here they are, the current goals for Polliwog Farm:

1) To feed ourselves. Fairly straightforward, but I feel like this is one of the most powerful shifts we can make as human beings living in a world that seems to be designed for disconnection and commodification. Growing your own food, as little or as much as you can, is an act of resistance. The quest for this simple and basic ingredient in my life has brought me to so many new and interesting and purposeful places, places so full of insight and magic that I hesitate to breeze by this goal as an obvious one. After all, I could actually feed my family for less money and less effort, all told. This is sometimes difficult to justify from a purely monetary standpoint. But of course that’s not the point. Aside from the obvious nutritional and ethical benefits, there’s also a wealth of insight and spiritual food that the natural world provides me all the time if I just dig into it a little. This work feeds us on a number of levels.

2) To contribute to a healthy livelihood for our family, which includes lots of good physical work, contact with nature and community, and an opportunity to continually integrate and activate and grow our values surrounding the current ecological and human crisis without making us crazy or depressed. It’s just doing something. I heard this wonderful song today and it made me cry a little but also swell with gratitude that I’m able to spend my time just trying to do something better than I could be, just moving forward a little on the path, you know?

3. To pay for itself, help us to shift into a lifestyle that costs less, and if we’re lucky to help Jeff cut down to part-time at his day job. This is the tricky part, the part that keeps me doing the microgreens and markets rather than frolicking in the forest all day and turning into a woodland elf that can talk to animals (#whatIreallywannabewhenIgrowup). But it’s practical, it’s dealing with the reality of our situation and the bills due each month. It also deals with the fact that the solutions (ie. organic food, permaculture, lower impact living, etc.) are not actually realistic monetarily for more than a select few. This is just true- doing this doesn’t make economic sense on the whole. I could do another post on this alone (and if there’s interest in that, speak up! I’ll make a point to do it), but I feel fairly certain that this is so. Creating a “right livelihood” that also is economically abundant is a false hope. Attainable for a lucky few, maybe, but overall it won’t add up. And the reason I think so is this: Industrial civilization is hinged on a hierarchical model that relies on consumers who are increasingly dependent on an extractive, human-centric, and ultimately abusive system that is incompatible with living systems. Don’t get me wrong, people have great ideas for how to make a living and I would not discourage anyone from doing what they can to make their money in a better way. Go for it. But the idea that we could somehow convert this economic model into a greenwashed one is simply false hoping, and it’s detrimental to the cause to encourage that myth. Individual changes and solutions abound, but in terms of systemic change, we have two things to contend with- the first is to resist and dismantle the current system, and the second is to build systems that are life affirming and non-exploitative. My theory? Life-affirming systems will be abundant but not profitable. They will be communal, humble, non-hierarchical, and not rely on extraction but be distinctly more service-based. Long story short, I gave up on the idea of having a profitable business a while ago. Things are going to get worse for us, because the economy is going to continue to suffer and the whole system is going to make less and less sense. But shooting for even, plus good food for my family? I can try for that and not go crazy. Enter 25 more birds, and we’ve got a chicken operation that might pay for itself and my eggs. Phew.

That’s it! Those are our 3 goals for this farm right now.

Anyway, I tried to identify the different varieties of laying chicks but it’s proving very difficult at this stage! I’m excited to see how they mature. They are delightful right now. The peeping from the basement makes me smile! Below is the description of the chicks I ordered. I’ve taken a picture of each type, because it’ll be good to reference for the future but also because cute. Chicks and a little cardboard box as a photo booth. 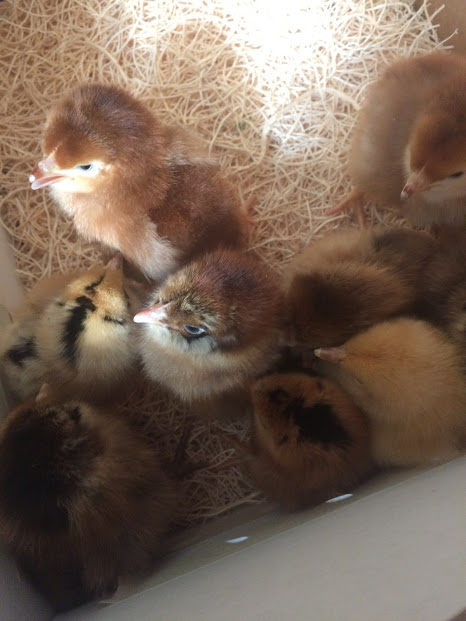 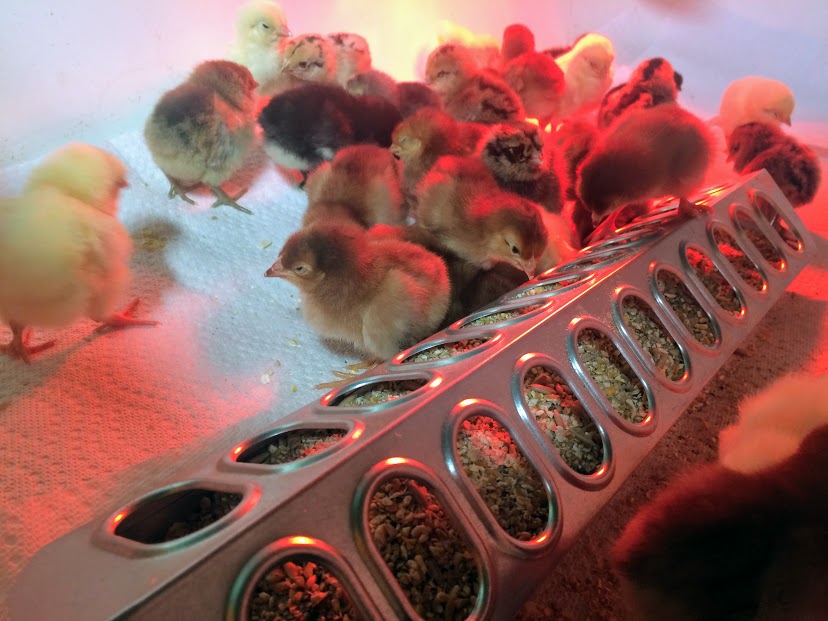 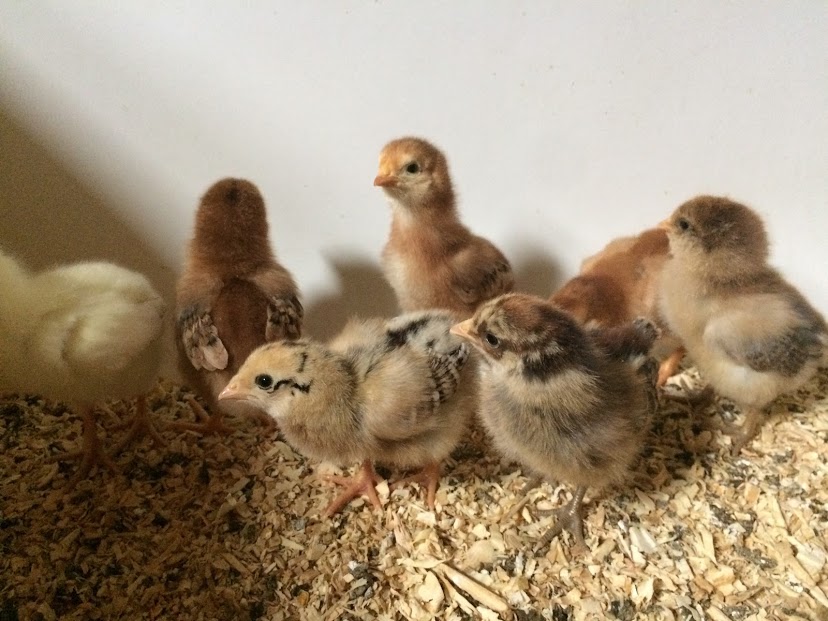 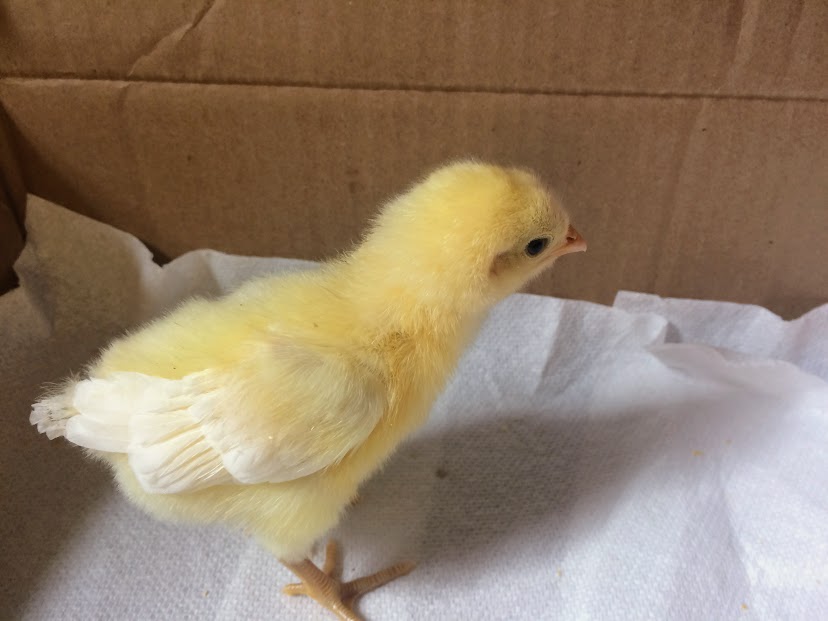 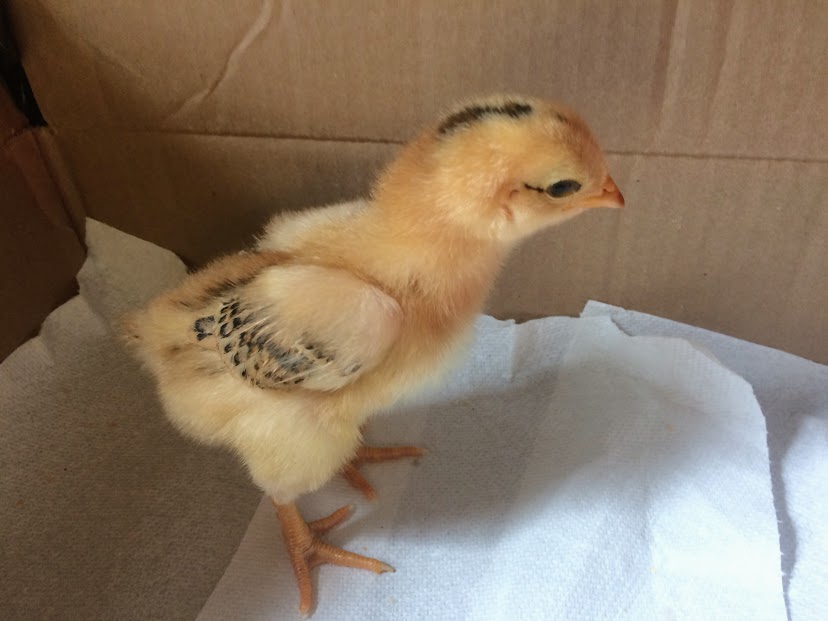 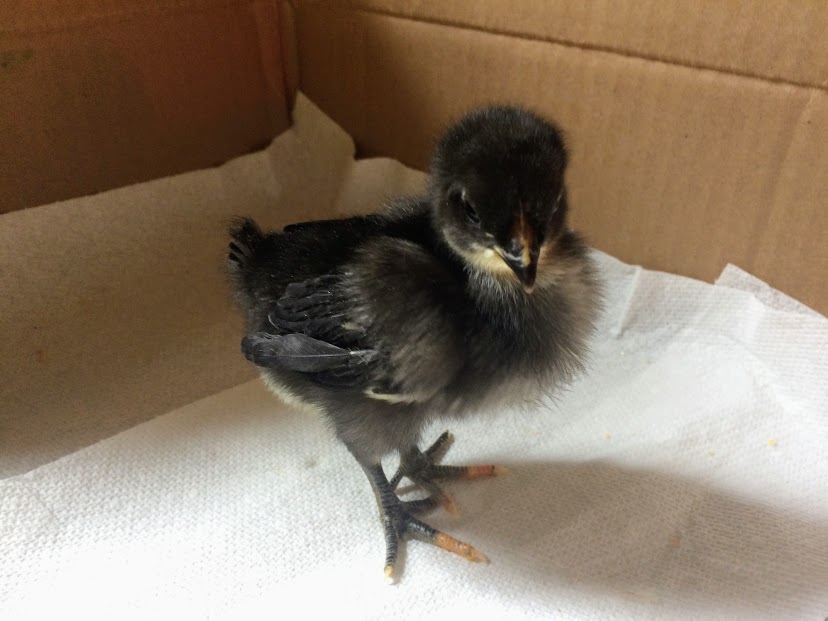 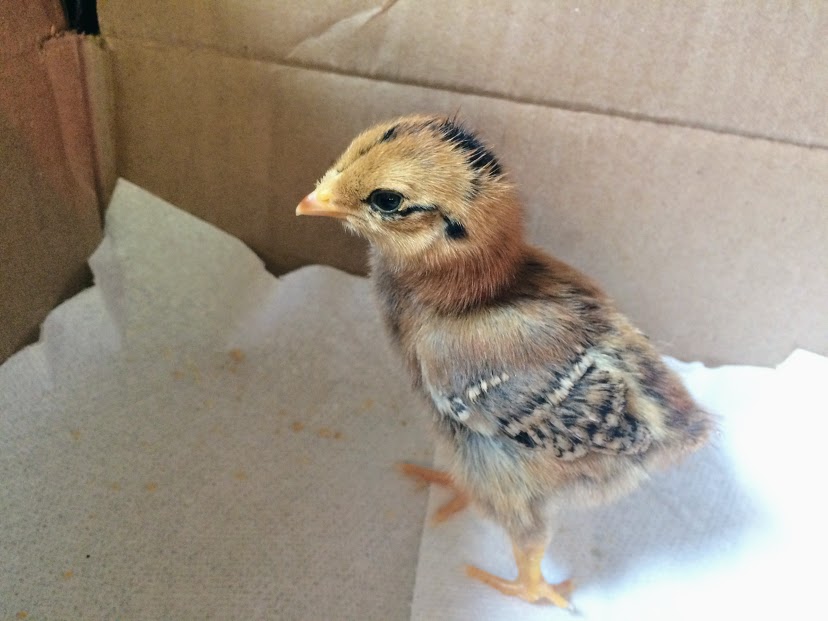 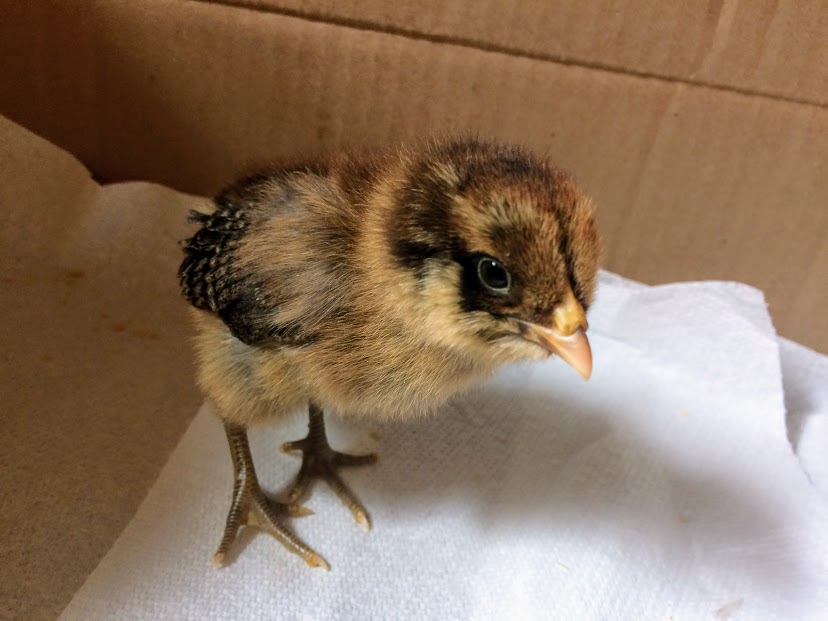 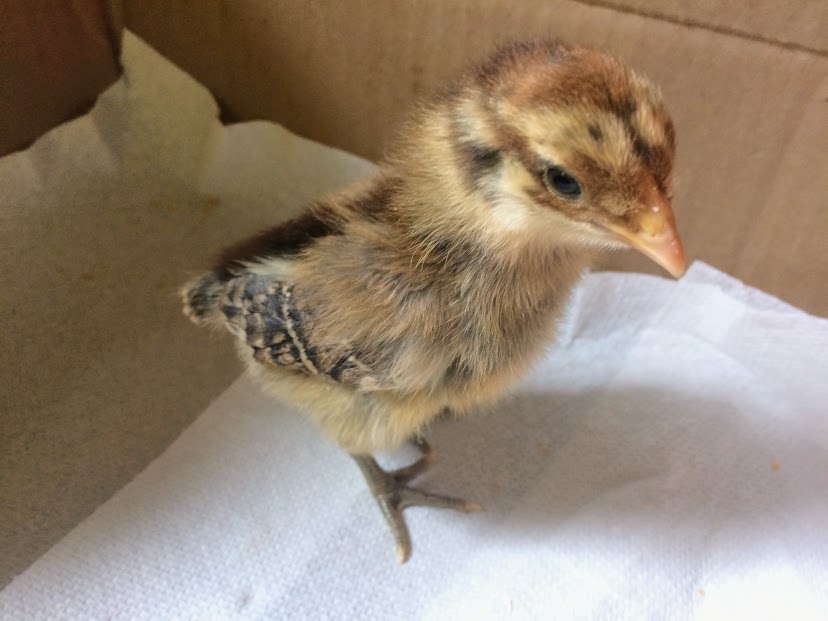 Anyway, it’s only been a week but already I’ve moved them all out of the tub/bin set up into the larger area in the basement. They are so happy about the extra space! Flapping their little fuzzy wings. I’m having fun. <3 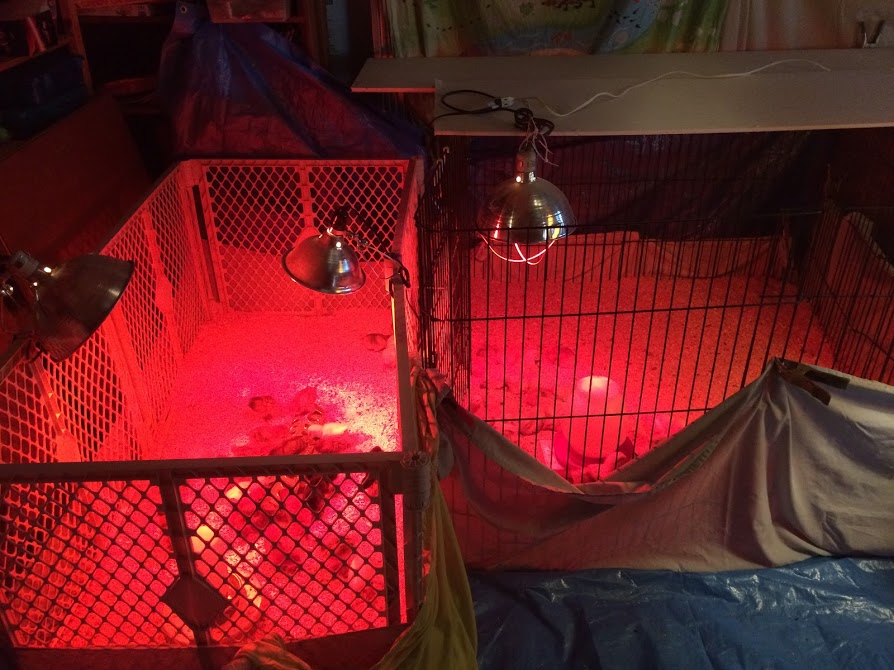