These microgreens, I tell ya. There were more than a few moments where I thought I couldn’t hang on to the business over the last year. First of all, they are finicky little buggers (which, despite the hassle, has given me lots of food for thought). Add to that a business/partner split, regaining our foothold and starting fresh, then selling our house, moving twice, and dealing with all the normal variation in weather and conditions… well, I did have some hair-pulling moments and we wondered if it was the right direction after all. Not only that, but Jeff was so busy with working to fix/sell our house, planning for our build, and his new job and everything, that I was left mostly on my own to hold it together.

Despite some of the good reasons to take a break, I couldn’t bear it. I have worked through so many ups and downs. I didn’t want to force it, but I wanted the opportunity to hang on until we were on solid ground to make a decision- to really find the space to apply everything I’d learned over the years. So much “failure”=so much more knowledge, right? So I hung on. And then Milton came along, my dear friend. He dove right in, just wanting to be on my team and to learn together. He volunteered his time with my microgreen business and with my job out at the farm. We fell into the partnership really naturally, and he offered just the kind of boost in morale I needed. When hanging onto all this (both this business and the old manifestation of my job) seemed just shy of silly, he had enthusiasm and interest and a great deal of understanding. He offered me the level of witness and solidarity that I so needed in order to be able to rally. I realized shortly after he came into my life and work that I don’t ever want to work alone again. I mean, I’m fine with some level of solitary experience, but if I *feel* alone, I really suffer. 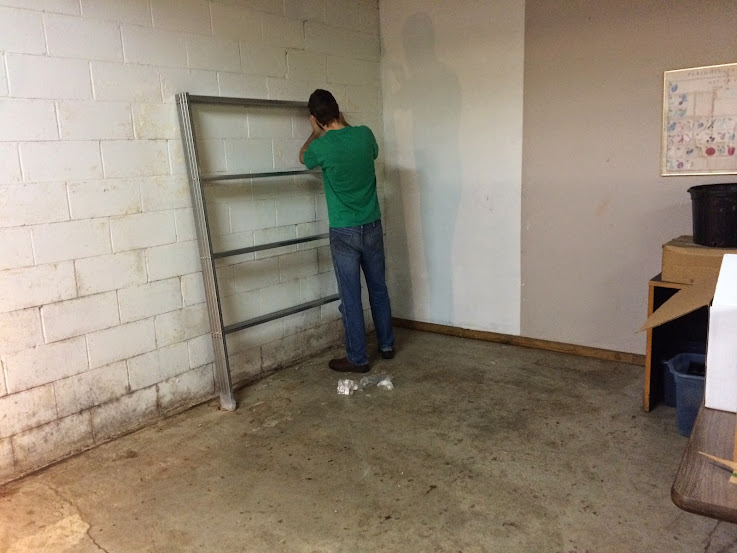 All this to say, we’ve come a long way over the past year. In late September the microgreens had found a home in Milton’s basement. We pulled the operation off with very limited space, and it was fairly successful. But December came along and we found that his house was dealing with more humidity than we were comfortable with, and we weren’t happy with the idea that it could eventually damage something or affect the air quality for his family. I started to research greenhouses, and we were back in that crazy transitional space once again. But then I came upon a hydroponic fodder system that had been tested for microgreens. Basically folks use these systems to grow fodder for their animals (which is something I’m totally going to do- so smart!), but the same system works just great for micros. I took the plunge. 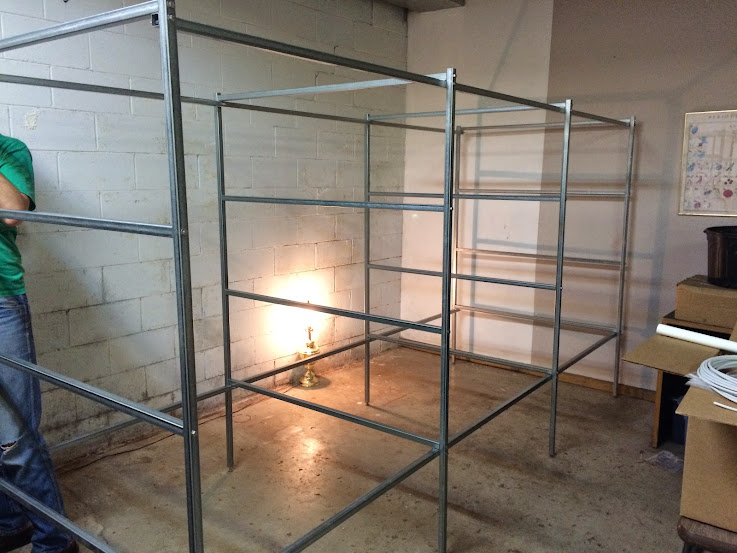 As one of the first members of The Cooperative at Dawn Farm, I was given permission to set up this system in the large space in the basement of the facility. Jeff and I spent a couple of weeks getting it all together. Lots of tweaking and gluing. 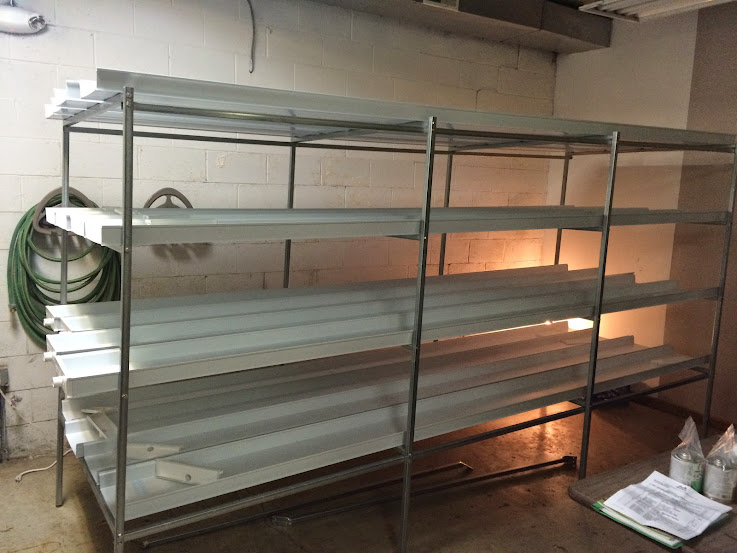 The full system is 16 channels, each measuring about 10 inches wide and 12 feet long. 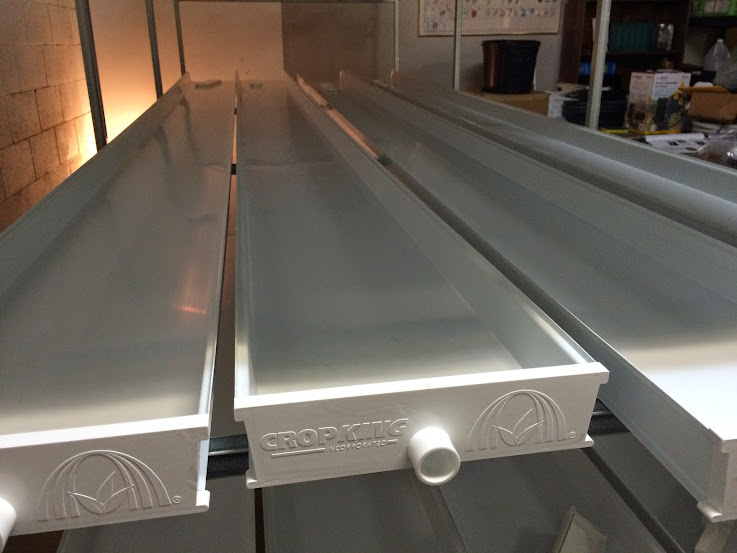 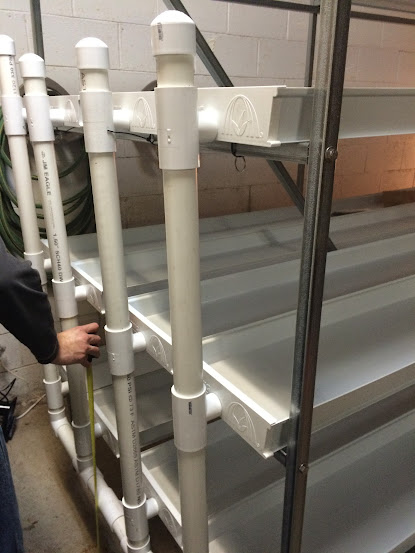 We used zip ties and key rings to attach lights to the bars. Cheap and durable solution! Right now I’m barely utilizing 8 channels at a time, so we decided to only set up for 12 of them. We can always expand to use the full 16 if needed in the future, and of course we are well versed in growing these in trays of soil. 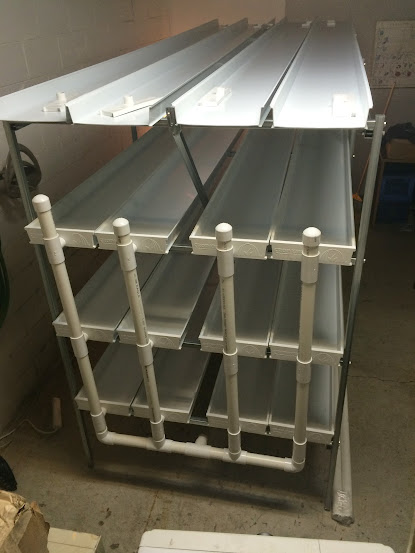 It was cool to put this thing together, too. I got a kind of hydro-101 through doing it. Very simple and efficient. Now that I know the basics, I’m thinking about putting together simple temporary systems outdoors during warmer months to supplement garden space and create consistent products even when garden real estate isn’t available. 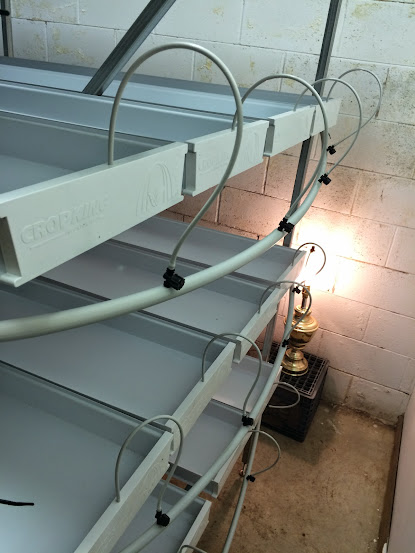 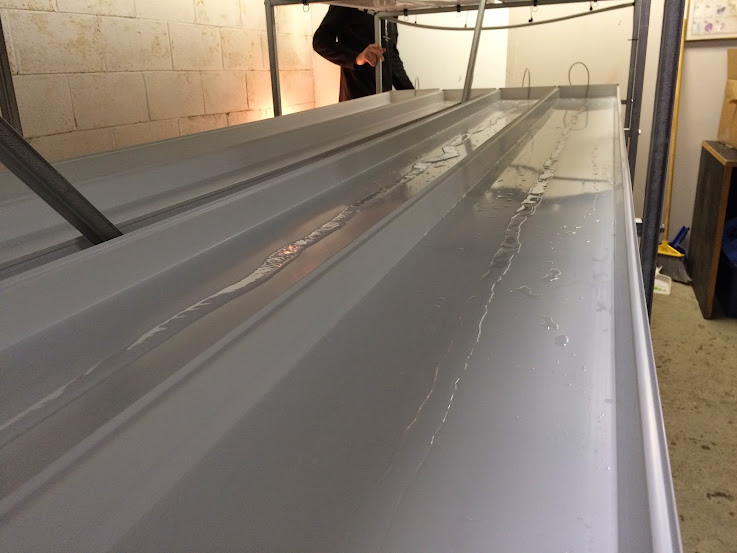 We tested the pump in a small tub we had available. 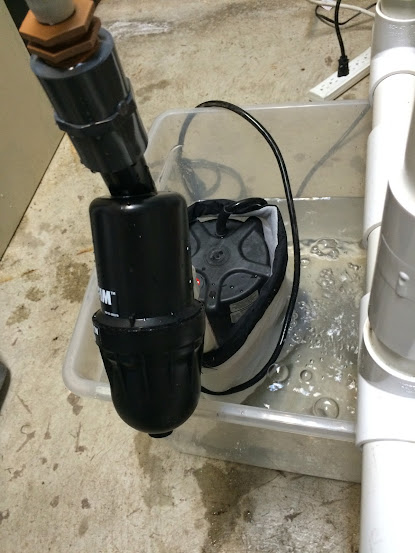 Everything ran perfectly, except for a few small leaks here and there that we patched up with silicone sealant. 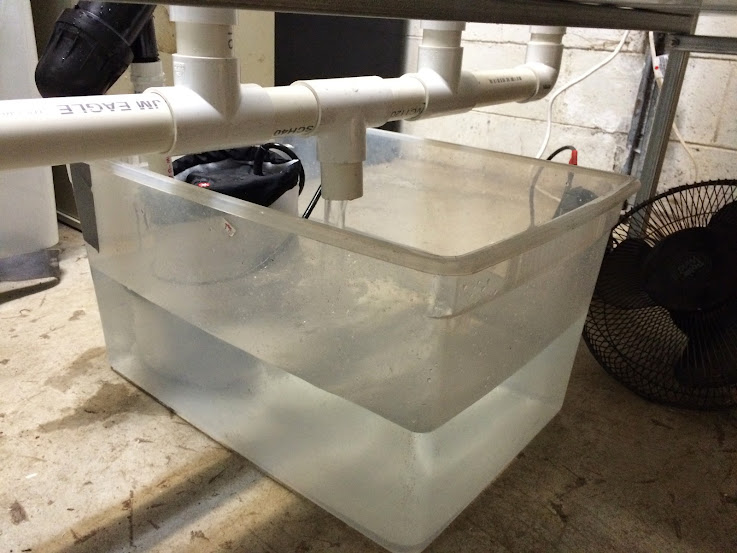 I did a full test of all our different varieties. The growing medium is two layers of burlap. It’s pretty cool because it’s soil-less, but still biodegradable. I can spread the burlap out after I’ve harvested the micros, and then use it as mulch and weed barrier in my garden afterwards. 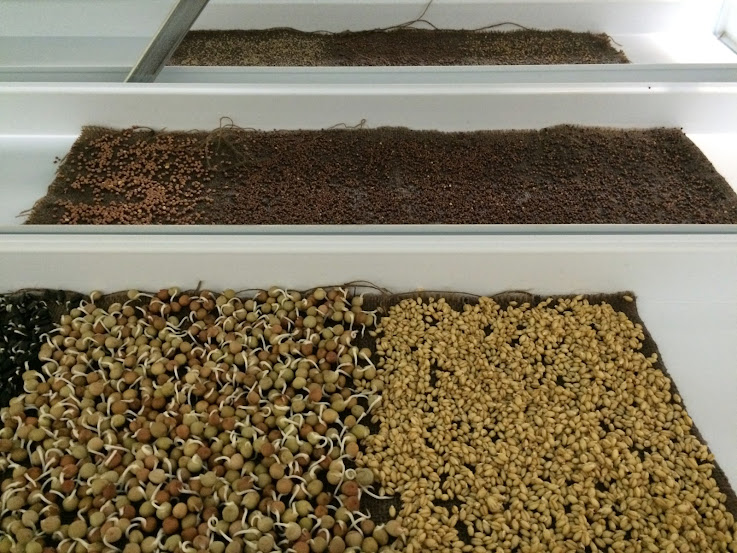 Everything germinated just great, and it was so low maintenance compared to what we had been doing! I mean, no more watering! The water pump is set to run water through the system every two hours, keeping everything consistently moist without me having to lift a finger. 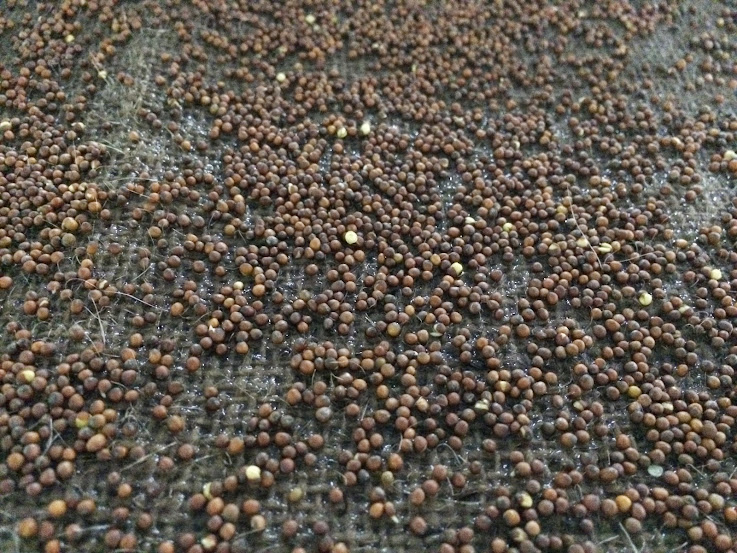 We got a basic watering trough from Tractor Supply to be our final water tank. It holds 75 gallons, and we just covered it with a tarp held down with some clips and bungie cords. 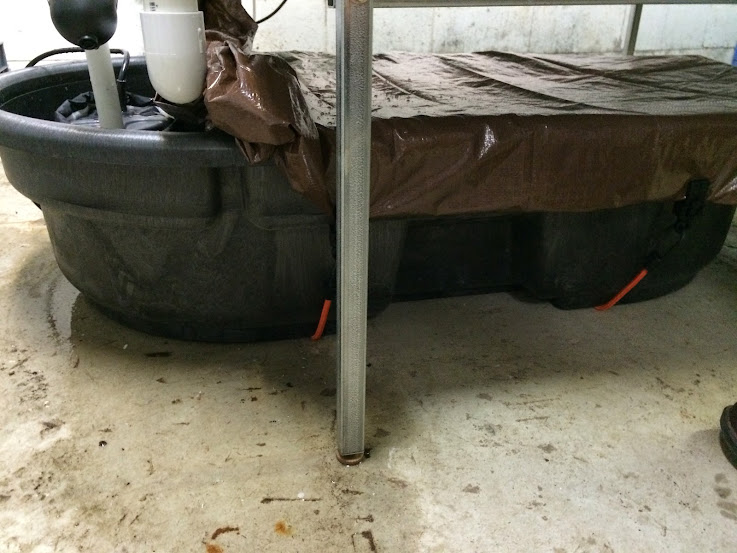 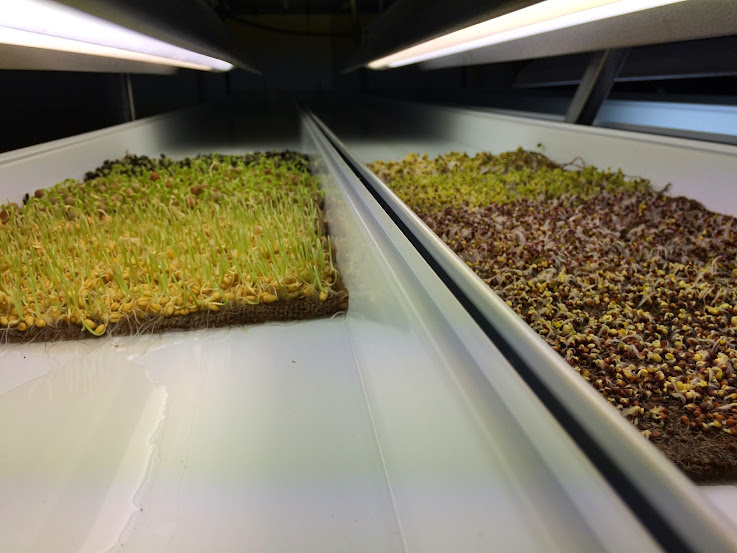 They kind of writhe around on the burlap at first, finding their direction. It’s fun to watch them wake up and tangle and then green up. I do like this little dance we do.

Soon enough we had a near perfect harvest. The timing was a little slower due to the open germination (which we are working to fix), but we weighed out our harvest and found that it was quite a bit better than our soil trays! In some cases we were getting over double the harvest per foot. Woot! I was beaming after this first test and we just dove right in.

Things turned out so well that we just dove in. We did a full sowing in the system, save for two varieties in particular that just seemed to do better in soil. These things are never simple though, are they? Working with such a finicky product means that I’m always playing detective. It’s been a good exercise for me, I’m sure, but it can be frustrating when you think you’ve done everything just the same and yet still have a problem you can’t get a handle on. The next batch, and every batch after was small and extremely slow to grow. Our yields tanked. I was so upset! 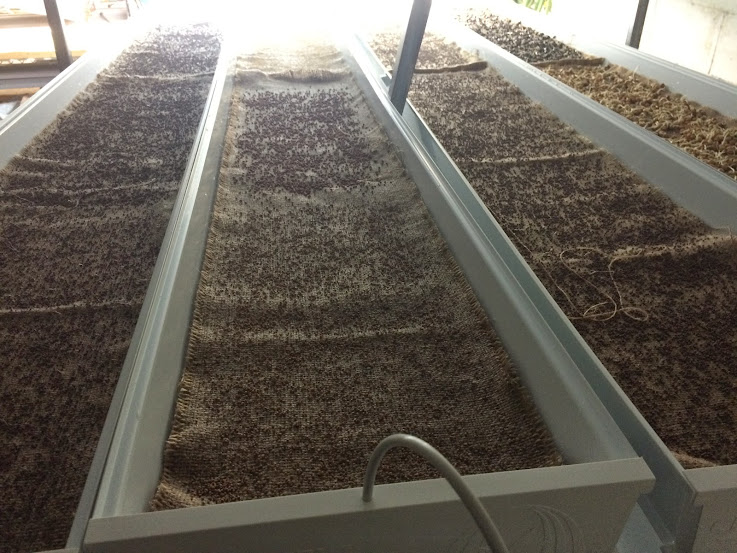 It took us several days to realize it, but soon we found the culprit- the ambient temperature in the basement had dipped about 10 degrees due to the incredibly cold temperatures we experienced last month, just enough of a dip to cause problems for the micros. They were showing signs of being too old, but also hadn’t reached adequate size. They were just too chilly to reach maturity in the amount of time we needed them to in order to stay healthy. The basement at the farm is partially buried and has no furnaces because it never seems to dip below a certain temperature. Yay thermal mass! Great for the building and energy conservation, but bad for our operation. We struggled to fill our accounts and lost some income, but kept trucking. This is how it goes, we just had to be creative.

The basement is huge and it wasn’t feasible to run a space heater. We thought of heating the water in the tank, but I wasn’t convinced that it would stay warm enough through the system to make a difference- it only trickles through for two minutes every couple of hours. We considered trying to make a room within the room out of huge plastic sheets. But then we worried about how difficult that would be to do, and if it would create issues with humidity. What you see below is our best idea, and thankfully it did the trick. I bought thrift store sheets and clipped them around the perimeter. Fabric, so it could still breath and be easily manipulated. We stuck a space heater underneath the system and put it on a low setting, and topped the system with cardboard so it wouldn’t let the heat out too easily. Voila! 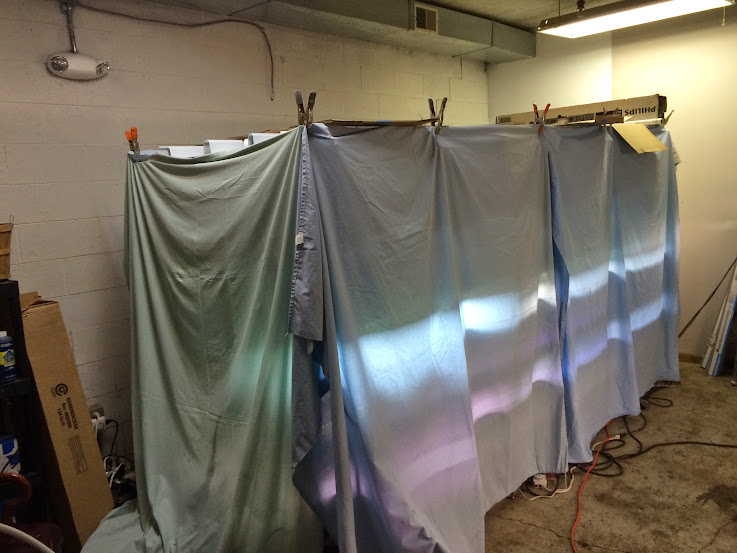 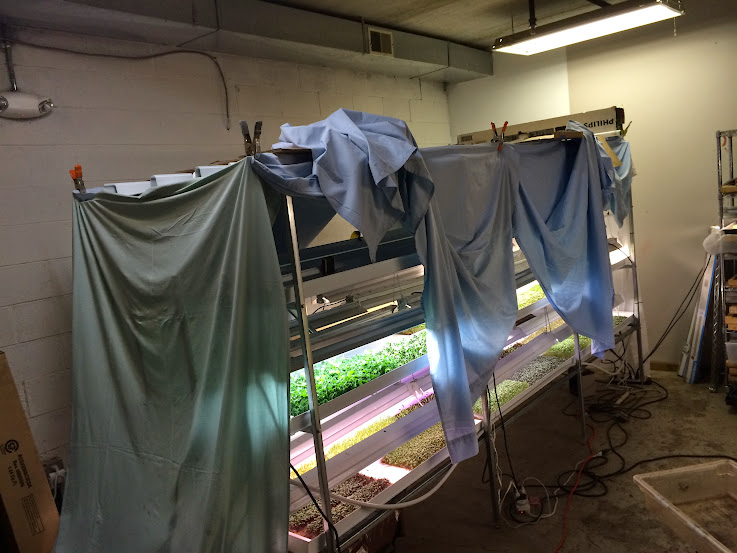 Thankfully, everything immediately responded and we haven’t had issues since. Just in time, because we got 3 new inquiries just last week! 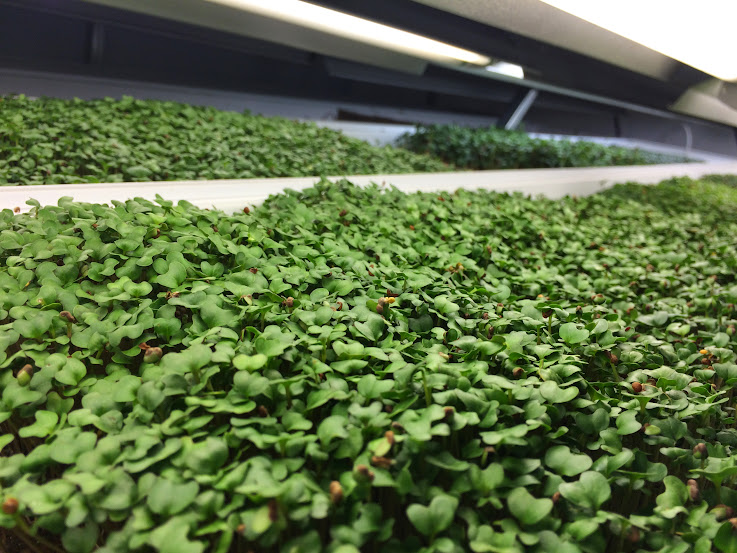 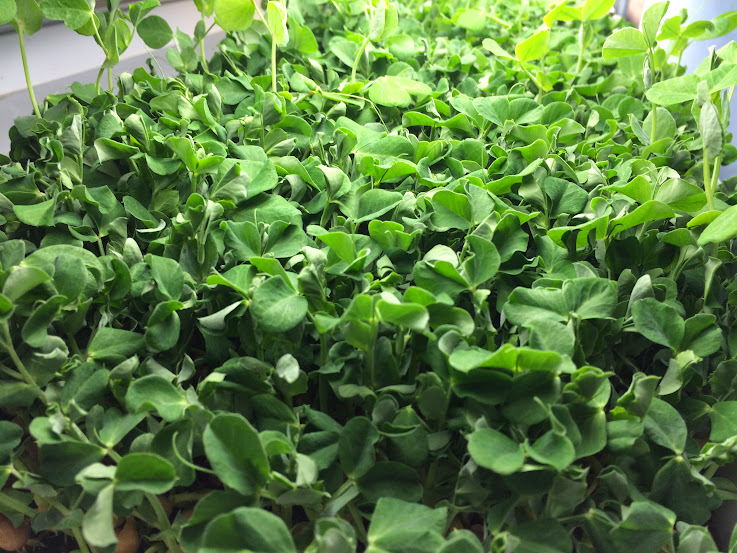 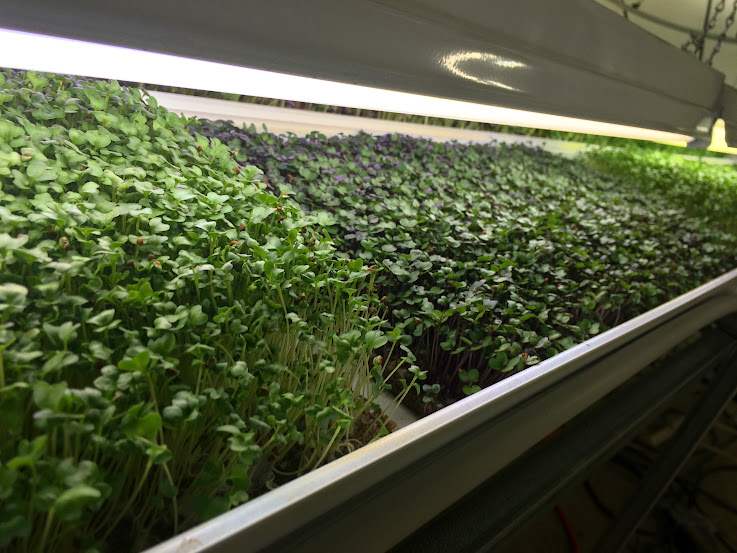 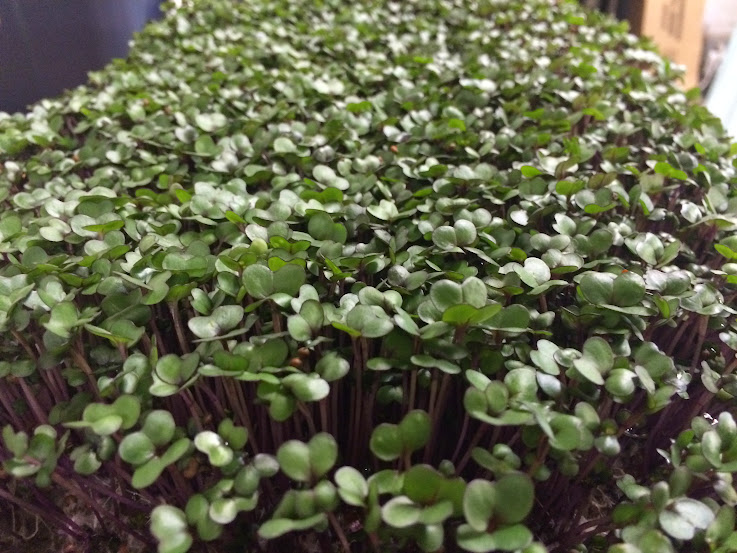 This is what the burlap mat looks like at harvest time. The roots weave themselves throughout, and there’s a neat soil-free carpet of micros, ready to be cut. Pretty great if you ask me. Now we are experimenting with nutrients in the form of compost tea, and starting to learn more about pH, etc. 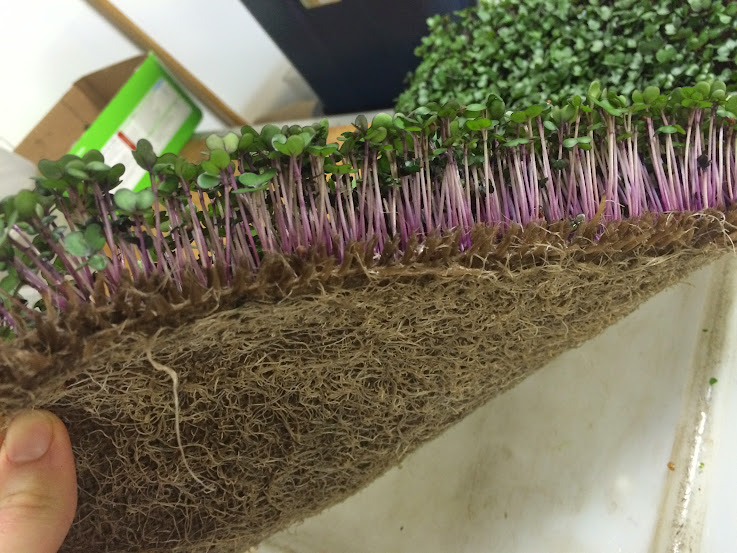 Anyway, this whole thing has been difficult at times, but ultimately it’s been really good for me. I’m proud of what we’ve accomplished. I’m excited by the fact that we’re ready to grow after all this time. I’m grateful that this little business has enabled me to expand and to pay a friend and help both our families out by doing something we enjoy. I love delivering these to people and hanging with everyone at market. I’m proud of myself for persevering, because I’ve always known that these things are about more than tangible results, even when people around me don’t believe the same. And then of course it’s nice to see a little pay off. These little guys have been a gift. Through all my farming struggles, at this point I see it all as being very… fortifying.