We took the weekend to rest and hang with family by a beautiful lake. It was good to just take two full days and just *stop*. We still thought about all our projects and had our worries, but we all got to see each other and read and splash around and that was good.

Now Jeff is back at it, full speed, and we are fully into week #2 of framing. Last week I left off at day #3 of framing, and they were working tirelessly on the floor joists. They hit several little hiccups along the way with these beauties. First, they finished the job. *Then* they realized that they measured everything from the east wall to the west wall (the concrete forms that went in) and realized that afterwards that the east wall had bowed just the tiniest bit over the course of the past week+. One inch, in the middle. This meant that each joist was just a smidge off in the center. Not a huge structural issue, but since the sheathing for the floor is measured and cut to exactly line up on each of these joists, the entire job needed adjusting. All these little details are giving these guys a real crash-course in house building. So, they spent the whole next day (last Thursday) adjusting all of the joists and adding an additional piece of lumber at the joining of the joists to make it up to code. Details!

What was amazing to me was how space can change as you add an element. Once the floor joists were up, in spite of the vast sky above being sliced by the lumber, the space felt bigger than it had. Perspective is a funny thing.

We had fantasized about living in a very small minimalist space. We like everything about it- less waste, more purposeful spaces and things, a smaller footprint, etc. I very much believe that, as a culture, we need to redesign the way that we live on the earth, and the tiny house movement is right in line with a lot of my thoughts on this one. When we got down to the fine print with the township to see what we were actually *allowed* to do, the story of our future house shifted drastically. 1200 sq ft minimum, all sorts of rules and regulations… We realized that getting out there on the up-and-up would enable us to work with the township to acknowledge other alternative things and possibly shift zoning laws to be more friendly to those who come after us.

Anyway, one thing led to another (including not being able to live in a mobile home and slowly build), and we ended up with a fairly conventional kit house (although, we were able to design the entire thing ourselves, which has been super cool). It’s what we could pull off with our particular resources. In the end, I’m very grateful for this route. There are lots of benefits to this current plan, and we are leaning into all those reasons why and finding lots of peace in this process. One of those things that I’ve come around to is the size of the house. We basically got cornered into a 1200 sq ft footprint. We were going to do just a crawl space underneath, but it turned out that to add a full basement would only add a few thousand dollars to the project. We had been pricing out and prioritizing a barn, but realized that if we went for a big basement with 10′ ceilings, we could consolidate everything into one building for now. So, what you see above is our basement- walk out, with double doors on both sides. The right side is for multi-purpose family use- seedling/microgreen growing space (until I can manage a greenhouse), guest space, storage and root cellar, and play space. Laundry in the middle. The left side is for the shop. All of our tools and projects will go in here. Jeff’s dream is to find an eventual livelihood in his own shop, so we realized that we should just make it perfect for him. This will also enable us to do lots of farm projects, continued work on the house, etc., without having to have a garage to make it happen.

The other thing I’ve realized is that we share our space like crazy. With the basement already so planned out in its purpose, the main floor is really consolidated and planned out already, and it’s gotta work for 6 people. Not only that, but Jeff and I have a solid 10 year history of creating a particular kind of energy in our space, which has included welcoming over a dozen people living with us at various times (and that’s not including ourselves or our kids). I didn’t quite realize it until we moved out of our old house. I’d just never really crunched the numbers. Our feelings about how our space interacts with the community hasn’t really changed, and we anticipate being even more open once we are a functioning farm. I’m not jumping at having other people move in, especially in light of the drama that accompanied the past couple of years, but I guess we just realized that we have a certain way of living that needs to include space for others. It makes us really happy to have our small consolidated personal spaces and the large common room in our design.

So, while the boys have been busy building, I’ve been hanging with kids and chipping away at farm work. It’s lovely, but I’ve definitely been hit with some waves of restless energy. I will have a lot of hands-on experience when the project is done, but for this particular piece of the project my help is needed elsewhere. Laundry and errand running only go so far for me. Heh. Complicated emotions run through an experience like this. Jeff and I level with each other on a regular basis, juggling the intense gratitude for this opportunity coupled with the anxiety and strange discontent that comes with feeling inbetween and uprooted for the past couple of years. It’s been a great opportunity for me as a person, to tap into a real practice in patience and seeking contentment wherever I am. I’m learning to not get caught up in a vision, but rather to take it one day at a time and work on daily gratitude and service. I feel like Jeff is getting a job right now that, albeit stressful and full of challenges and pressures, is scratching a life-long itch of his and is steeped in delicious feelings of purpose and of genuine interest and motivation and accomplishment. I am envious, watching that happen for him from the sidelines. I’m also genuinely happy for him, and for us. So many feelings are weird and seem contradictory, but I’ve found I make a lot more emotional/spiritual progress when I let them flow and don’t try to make sense of them. When I do that I can get more honest with myself, which enables me to make better sense of what’s happening and figure out why I feel how I do without the accompanying shame or guilt. Much of my vision is being realized here, just in living this life we’ve got, but many of my plans are tabled for now. That feels hard sometimes. Lots of things I used to do are not in my reach, and I’m watching friends take up hobbies and homesteading projects that look oh-so-wonderful to me but are just outside of my grasp. I recognize that this project opens up the door to so much more than I had ever planned on doing, but it doesn’t stop the occasional pang of wanting to sink my teeth into my own thing. I yearn to get back to the barefoot walks through my yard, popping warm tomatoes in my mouth and harvesting herbs outside my door. I am a plant that has deep roots, but I’m potted up for now and am filling every crack and crevice of my container while I await a final planting. There I go with the farm metaphors…

Last week I got to spend time with Pat’s daughter Lucia. We had fun out at the farm. These kids all get along so well, it’s been great. I am still amazed by how much easier childcare is now that the kids have gotten past the toddler/baby stage. Now more kids means that certain things are more complicated (moving from one place to another, feeding everyone, etc.), but otherwise I’m mostly hands-off and they are all content to just play. I love it. On this day I was feeling like just saying yes to the kids (within reason) and so we ended up doing some fun and silly things.

I let the kids plan dinner on this night. They couldn’t decide between breakfast for dinner (pancakes, etc.) and spaghetti and meatballs. I told them that I’d make anything they like, but that it had to be one meal. They discussed and debated and this is what they came up with. Behold, “BBQ meatball corn pancake roll-ups”. They were actually kind of awesome. We had a salad on the side, and roasted marshmallows over tea lights on the front porch.

But back to the house progress. This was the end of the day on Thursday. They stayed out until 10pm that night working.

On Friday they worked a short day (only until 3pm!), and finished up the floor before taking the weekend off.

We all had a nice weekend and came back more rested. I started early out at the farm on Monday. I’m finding it’s working better for me to run out to the farm for an hour or two very early before the kids get up so I can check some things off my list. I’m finding the early morning scenery feeds my soul in ways unexpected.

Jeff and Pat got to work early as well on Monday, and managed to build stairs from the basement to the main floor and frame out the north wall. 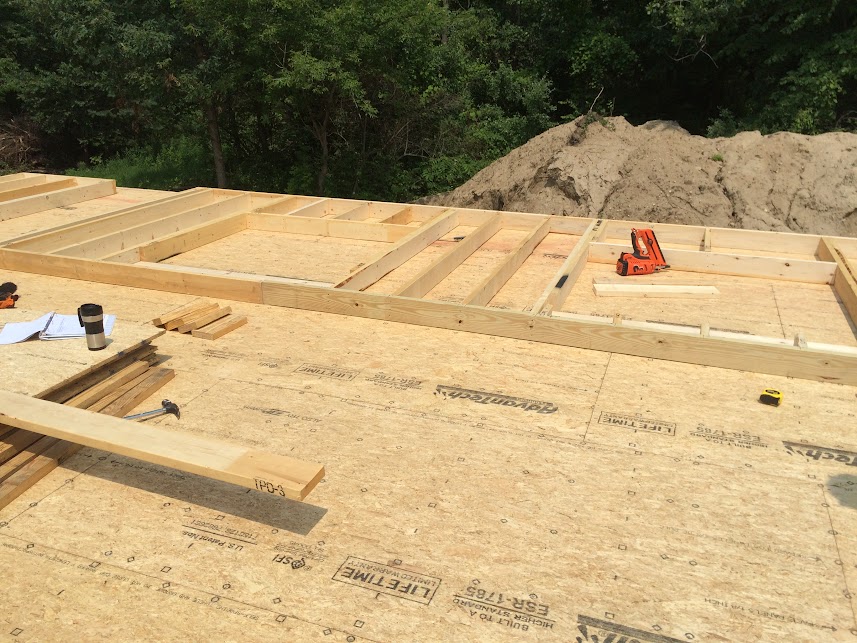 Kind of neat to see every step of this process and the bare bones of everything. I’m going to be able to make mental sense of this house in a way that I wouldn’t be able to otherwise. I <3 unschooling and all the fun it brings our family.

Now that we’ve got our slab and main floor done, the backfilling on the north wall can be done. This is good, because they’ve basically been working around and in a moat with these 10 ft tall walls surrounding 3 sides of the building. It’s been challenging for them, so it’s time for a little more solid ground.

Yesterday was rainy and so Jeff worked on back-filling in the morning, but then he and I took some time to run errands together. We picked out and ordered all our doors and windows. They’ll be coming on the 21st. I know they are making fast progress on the other walls today! Another post to come soon.

“Life is a series of natural and spontaneous changes. Don’t resist them – that only creates sorrow. Let reality be reality. Let things flow naturally forward in whatever way they like.” (Lao Tzu)