Oh, change. It seems to be what we do around here lately. Jeff has started this diet to heal his gut and rebuild the good flora. It's called GAPS. At first I was a little hesitant. I mean, I actually have a lot of respect for the diet and have heard stories of the wonders it's done for people. We also hold many of the same nutritional opinions already (such as the idea that your gut flora is intimately tied to your health, and that traditional diets are the ones that are best suited for most people since we evolved with them, etc.). But man, do I really need another change right now? For him, this means no dairy, no grains, no starchy foods like corn or potatoes or beans, no sugars (only certain fruits, and a little honey is allowed at first), and absolutely no processed foods or additives or vegetable oils (with the exception of olive and coconut). We eat so well already, but stripping out all that means that I have to really focus. 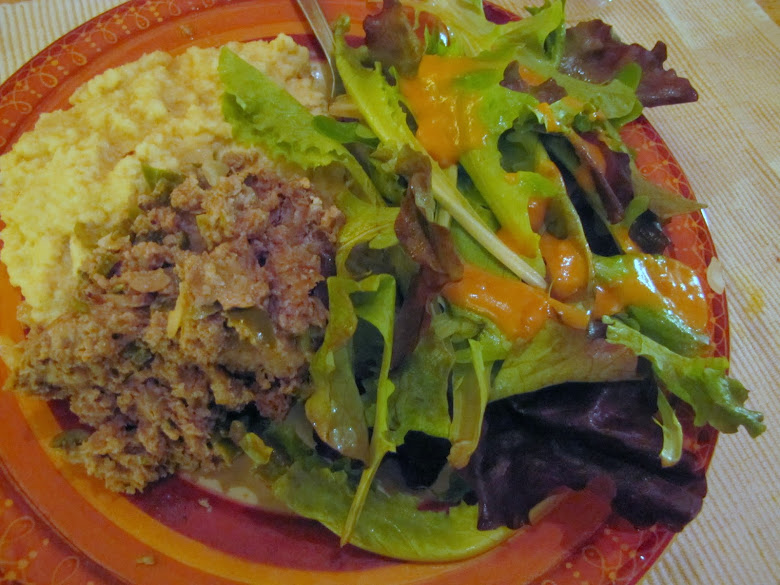 This was a gaps-friendly dinner from the other night. Grain-free meatloaf with peppers and onion, cauliflower mash seasoned with herbs and the drippings from the meat, and salad.

I tried not to pout… at least visibly. Of course I want him to be healthy! He has sited allergies and asthma and has been unofficially diagnosed with ADHD (although I think that's mostly bs, I will say that he has a pretty distracted way sometimes), and various gut symptoms as well. He admits that he ate crap growing up and he also lost his appendix as a teenager. Despite all this evidence that a gut-overhaul might be a good idea, I still felt resistant to it. I think I was just overwhelmed. He tried to reassure me that he'd do his own cooking and thinking about the diet, but I just knew… I mean, we've been together 10 years this spring. I just knew it would be me. Either that or he'd be eating over-easy eggs for every meal.

Tuna salad creation with avocado and lemon juice and salt and pepper. That's it. And I swear, it was way better than the mayo version. I think this is how we'll be doing it from now on!

But, I probably should have known that it would become a welcome distraction. Heck, it's not even really a distraction. The thing I probably need most during a time that has me questioning my roles and identity is something that helps me feel purposeful. I've tapped back into that I-am-the-woman-of-this-house thing (in the most liberating and happy of ways) that I honestly haven't felt for a while. It's a good thing. Also, Jeff won't have to eat this strictly forever- just until he can figure out if he has any sensitivities. Anyway, on to lots of food things.

Jeff can eat ghee right now but not butter. I've been meaning to make clarified butter for a long time now, but never had a good reason to do it. It was super easy!

I started with a 1.5 pound block of butter. Then I heated it up on med high heat until it got all foamy.

Then I turned it down to med heat and watched it develop this bubbly film on the top.

Then a few minutes later it started foaming up again, and it was almost done! I stirred it and could see all the milk solids browning and sinking to the bottom.

Then I just strained it through a fine cloth and voila! It made about a pint and a half.

After it sat at room temp for a few hours it solidified a bit- it's like a spread now. It is delicious and Jeff is happy. It has a stronger flavor, but it's very good.

Next I set out to make gummie treats. I've been meaning to make these for a while now, too. I've been using this good gelatin powder as a supplement. It's so good for you! Never mind that I almost killed myself the first time I took it- Note: this powder is meant to dissolve in water prior to consumption. Not to be shoved into your mouth only to gel every last drop of saliva and leave you panicking with your mouth practically glued shut. I am so grateful I didn't swallow…

Anyway, above you can see my ingredients. Some honey, gelatin, juice concentrate, pureed blueberries from this past summer, and water. I used this basic recipe. It was super easy, but the one thing I wasn't a huge fan of was getting them out of those silicone molds. What a headache! I'm just going to set them in a dish and cut them into cubes from now on. The kids don't care either way.

It was so easy that I quickly made another batch that is gaps-friendly for Jeff. This one had coconut milk, honey, lime juice, and pureed banana. I actually think the kids like this one better!

Yesterday I pulled up some of those beautiful purple carrots, a couple of daikon radishes, and a bunch of broccoli leaves from our young plants.

I shredded the carrots and daikon, some squash, and some broccoli stems in my food processor. I added a few eggs and some coconut flour and cooked them in patties to make a modified latke type thing.

I had a chicken roasting in a dutch oven all afternoon. About an hour before dinner, I stuffed all the broccoli leaves next to the chicken and covered it up. Just before serving I made a quick hollandaise in my food processor with the ghee. It took all of 1 minute to make! Yummy food, for sure. The broccoli leaves especially- Jeff called them "buttery". They cooked up a lot like collards. I've used them before but only in soups. Now I think I'll use them all the time- so delicious!

It's fun to be experimenting, and while I don't think that I personally will ever ditch cheese or the cream in my coffee, I'm all for doing what works for my family.